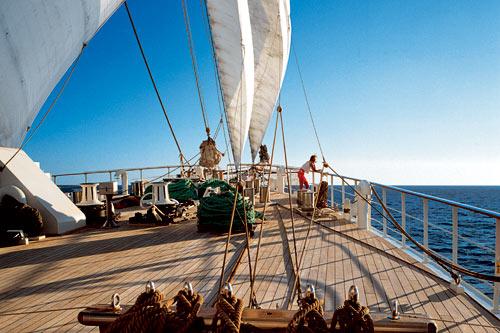 By
History and Romance at Sea
By Matt Hannafin

"Evocative" is an adjective that doesn't stick easily to most cruise ships. An evocative ship must impart a sense that you're connected with past decades, centuries, and generations of travelers. It must evoke something important and worth remembering -- the great steamships of 1910s-1930s, for example, or those majestic ocean liners (the United States, the France, HAL's Rotterdam, Cunard's QE2) that plowed the seas before the jet age began.

Sailing ships pack an even greater sense of history. For almost 5,000 years, from the earliest Egyptian and Sumerian mariners to the great admirals and explorers of the British Empire, mankind relied on the winds to take him beyond the world he knew. Today, sailing is a niche in every respect -- a sport for those with their own boats, and a labor of love for those few small cruise lines and private operators who keep passenger sailing alive.

Some of those private operators offer a B&B-like experience at sea. There are also the few large sailing ships that hark back to the magnificent vessels of the 18th and 19th centuries, when the technology of sailing reached its greatest peak, only to be eclipsed by the rise of the steamship.

Whether you're looking for a romantic getaway or an adventure, these nine mighty sailing ships truly evoke the golden age of sailing.

Photo Caption: Passenger in the bow aboard Sea Cloud II. 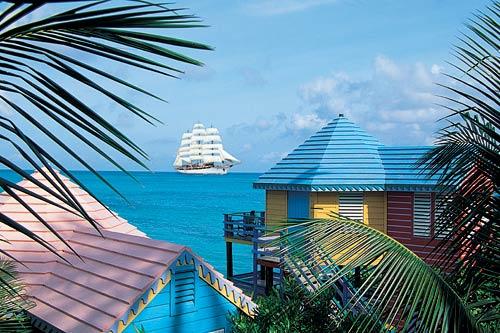 Sea Cloud Cruises
Line: Sea Cloud Cruises
There's romance in sails. Chalk it up to centuries of mystique -- the call of the unknown, of stepping aboard a tall ship, hoisting the sails, and being borne away by the world's own winds. Chalk it up, also, to artistry: From the novels of Herman Melville to Pirates of the Caribbean, our cultural heritage is rife with seaworthy tales. In the late 1920s, Wall Street tycoon E. F. Hutton and his wife, heiress and businesswoman Marjorie Merriweather Post, decided that they, too, needed to see the wonders of the deep, and so commissioned construction of the four-masted barque Hussar.

Launched from Germany's Krupp family shipyard in April 1931, Hussar was the largest sailing yacht ever built, designed and outfitted with the kind of exquisite detail that defined her owners' brand of American royalty. In 1978, after a diverse career as yacht, military weather ship, and floating schoolhouse, she was bought by German economist and seaman Hartmut Paschberg, who began restoring her to her original grandeur and rechristened her Sea Cloud, the name she'd carried from 1935 to 1955. She now offers sailings for 64 lucky souls. 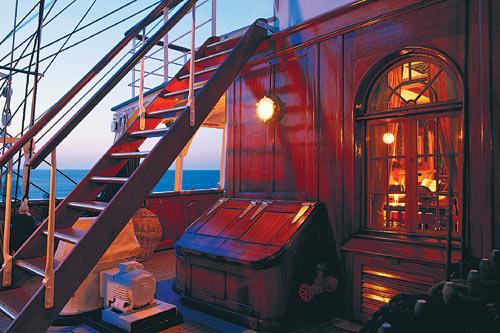 Sea Cloud Cruises
Line: Sea Cloud Cruises
In October 1978, Sea Cloud departed Panama, sailing east, and a full month later arrived at Hamburg harbor. From there, she went to Kiel, where workers at the Howaldtswerke-Deutsche Werft AG shipyard spent eight months restoring her to her original grandeur of marble, gold, and mahogany detailing.

Today, she's a time machine and is possibly the world's finest surviving example of the early 20th-century sailing yacht.

For those who can afford it, Sea Cloud Cruises (www.seacloud.com) sails in the Mediterranean and northern Europe.

Photo Caption: On deck in the evening aboard Sea Cloud. 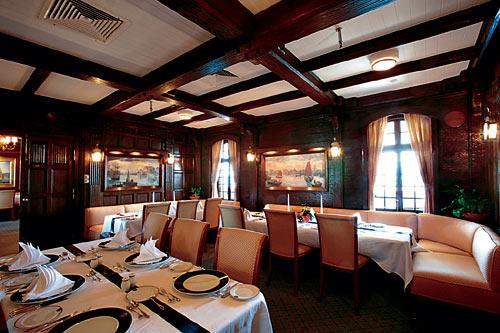 Sea Cloud Cruises
Line: Sea Cloud Cruises
Sea Cloud's interiors are as sumptuous as her history would demand. The ship's main restaurant, with its dark-wood paneling, brass trimmings, and nautical paintings, takes us back nearly 100 years, to the days of drawing rooms, white-glove service, and evening port with cigars. 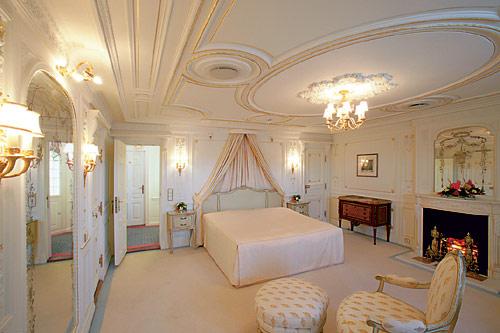 The other owner's suite, once the preserve of Mr. Hutton, has a wood-paneled gentlemanliness. The ship's other original suites are similarly if less sumptuously furnished, while her standard cabins are more modern and functional, without the historic frills. 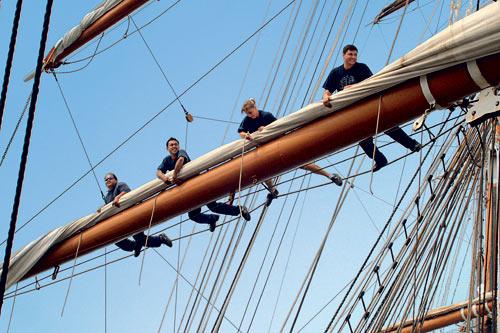 A large square rigger, flying two dozen sails, is a complicated piece of technology, requiring the coordinated effort of a large, dedicated crew that has literally learned the ropes and can scramble at a moment's notice to catch the wind. Sea Cloud and her younger fleetmate, Sea Cloud II -- a three-masted, 94-passenger vessel built in 2001 -- are each over 350 feet in length, with main masts that soar more than 170 feet above their decks and fly more than 32,000 square feet of sail.

By comparison, the largest sailing ship in the world, Star Clippers' Royal Clipper is far larger, measuring 439 feet in length, with a 197-foot mast and 56,000 square feet of sail. 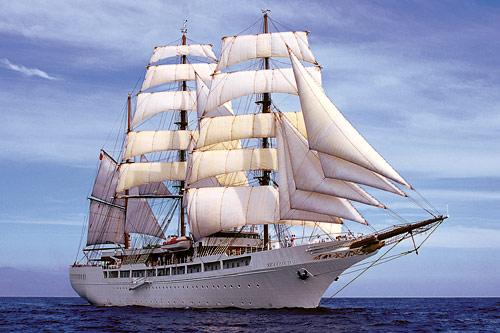 Sea Cloud Cruises
Line: Sea Cloud Cruises
The three-masted Sea Cloud II is a modern reinterpretation of the fully rigged clipper, built in 2001 as a fleetmate to the classic Sea Cloud. Classic in profile, she has an interior to match. Her elegant lounge has rich mahogany woodwork, ornate ceiling moldings, leather club couches, and overstuffed bucket chairs. With several opulent suites, including one with burled wood paneling and a canopy bed, Sea Cloud carries 94 passengers and sails in the Mediterranean and Caribbean.

Sea Cloud Cruises has for several years been planning to add a third vessel to its sailing fleet. Dubbed Sea Cloud Hussar, she'll have three masts and carry 138 passengers -- if she ever gets finished. This past summer, Factoria de Naval Marin (the Spanish shipyard where Sea Cloud Hussar was being built) filed for bankruptcy and all work on the vessel ceased, though she was reportedly near completion. 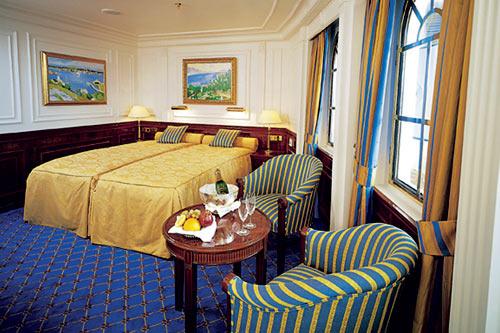 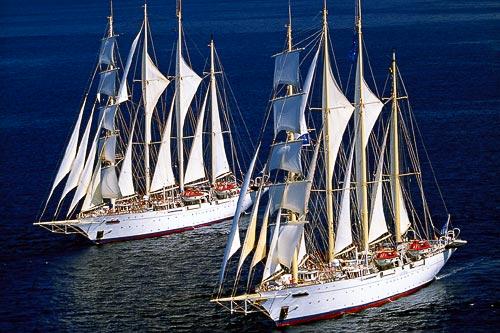 Star Clippers
Line: Star Clippers
In the early 1990s, Mikael Krafft had a dream. Blessed with a passion for ship design and deep pockets, the Swedish-born industrialist and real estate developer sunk more than $80 million into building Star Clipper and Star Flyer, twin sailing craft that would bring 19th-century clipper ship design into the 20th century.

To realize his dream, Krafft procured the original drawings and specifications of Scottish-born Donald McKay, a leading naval architect of 19th-century clipper-ship technology, and employed his own team of naval architects to solve such engineering problems as adapting the square-rigged, four-masted clipper design to modern materials and construction. It worked.

During Star Clipper's maiden sail in 1992 off the coast of Corsica, she sustained speeds of 19.4 knots, thrilling her owner and designers, who had predicted maximum speeds of 17 knots. During regular cruises, the two ships run on sails alone about 25 percent to 50 percent of the time, otherwise using them in conjunction with the engines to maintain speeds of 9 to 14 knots. For passengers, ducking under booms, stepping over coils of rope, leaning against railings just feet above the sea, and watching riggers at work are constant reminders that you're on a real working ship -- and if that's not enough, you can volunteer to help with the sails, or climb up to the crow's nest for an experience no regular cruise ship can offer.

All three Star Clippers (www.starclippers.com) vessels split their time between the Mediterranean and the Caribbean/Central America. 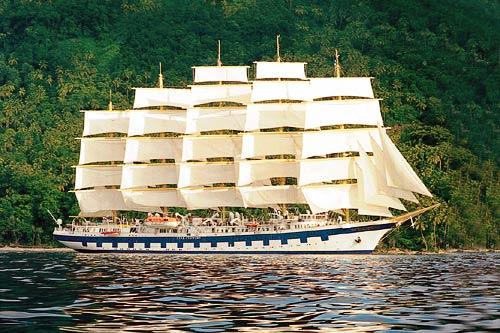 Star Clippers
Line: Star Clippers
More than a decade after introducing its first vessels, Star Clippers launched Royal Clipper on a design inspired by the famed German clipper Preussen of 1902. Measuring 439 feet in length and able to carry 227 passengers, Royal Clipper now claims the title of the largest true sailing ship in the world.

With five masts flying 42 sails that together stretch to 56,000 square feet, she's a terrifically powerful vessel, able to achieve 20 knots under sail power only, or 14 knots under engine power. Her look is pure romance, and is particularly suited to the eastern Caribbean cruises she offers each winter -- an exotic ship for an exotic locale.

Out on deck, where passengers spend much of their time, the ropes, cables, wooden barrels, brass bells, and chunky anchor chains are constant reminders that you're on a real ship. 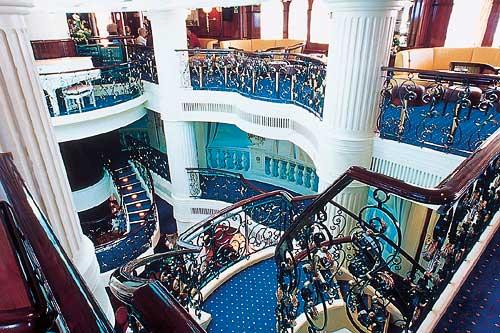 Star Clippers
Line: Star Clippers
Royal Clipper is like no other sailing ship, with a three-level atrium and a frilly multilevel dining room that are more like what you'd find on a larger cruise ship. Both her cabins and public spaces are designed with a strong nautical theme (dark-wood paneling, navy-blue and gold upholstery and carpeting) and she offers niceties like marble bathrooms, a small gym and spa, a library, three pools, and a marina platform that lowers from the stern for water sports and diving. 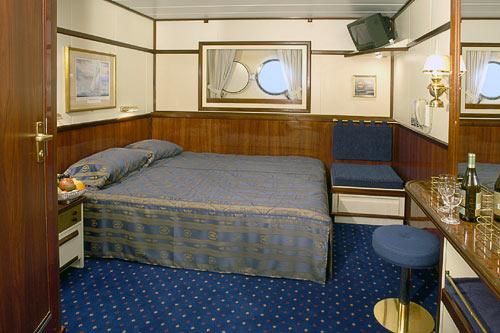 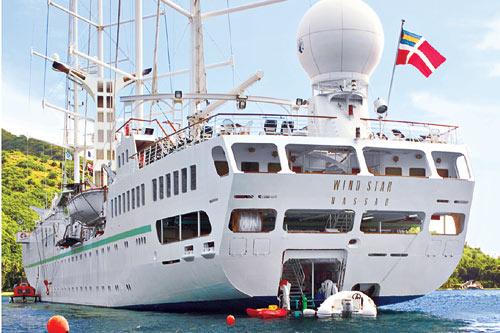 Windstar Cruises
Line: Windstar Cruises
Not all the large sailing vessels in the cruise world are square-riggers. Windstar Cruises (www.windstarcruises.com), probably the most successful and visible of the sailing ship lines, got its start in 1984, founded by a consortium of two ship owners and Jean Claude Potier, a former U.S. head of the legendary French Line.

From the start, it was all about the sails -- and specifically about a new cruise ship design by the Finnish shipbuilding company Wartsila. Dubbed the Windcruiser, the concept combined old-school sailing-ship technology with modern engineering to create a kind of vessel never seen before in the cruise ship world: huge by sailing-ship standards, with over 20,000 square feet of computer-controlled staysails able to furl and unfurl at the touch of a button.

Like other large sailing ships, Windstar's three vessels -- the four-masted, 148-passenger twins Wind Spirit and Wind Star and the much larger, five-masted, 312-passenger Wind Surf -- typically operate using a combination of sail and diesel power (with the sails acting more as a fuel-saving adjunct), but they can in fact travel at upward of 12 knots under sail power alone, when the wind is right. 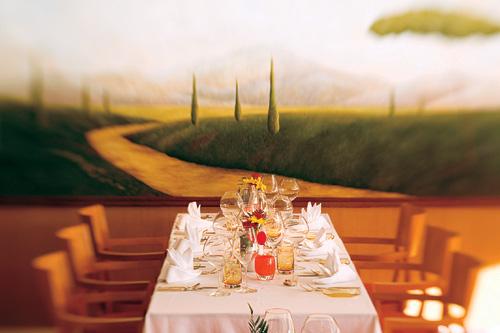 Windstar Cruises
Line: Windstar Cruises
All three Windstar ships mix an always-casual onboard vibe with first-class service and cuisine, while beyond-the-norm itineraries typically hit a port every day. Sea days are kept to a bare minimum. Onboard, socializing (especially at sail-away and sundown) is about the most organized activity you can expect, though there are some exercise classes and, when anchored offshore, the opportunity to go kayaking, sailing, water-skiing, and more from a water sports platform in the stern.

Aboard the larger Wind Surf, passengers can choose from multiple dinner venues, including the main restaurant (whose many tables for two help make Windstar a great honeymoon line); a cozy, reservations-only alternative venue called Degrees, serving a Mediterranean menu; and two alfresco options on the top deck, Candles for steaks and skewers and Le Marché for seafood. 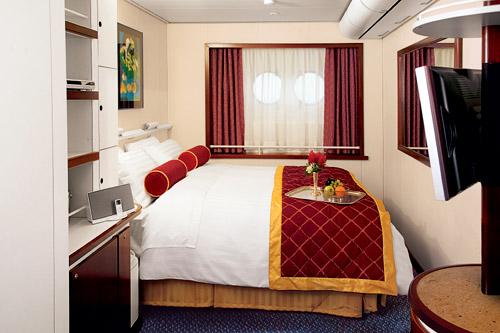 Photo Caption: A standard stateroom aboard all three Windstar ships. 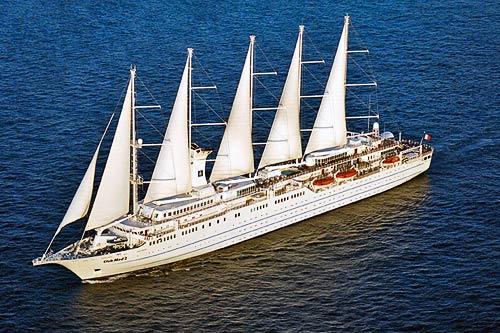 Club Med
Line: Club Med Cruises
Once upon a time, Windstar's Wind Surf sailed as Club Med 1 for Club Med Cruises (www.clubmed.com), but when Club Med decided to downsize, her great similarities to the smaller Wind Star and Wind Spirit made her a natural pickup for Windstar.

Today, the two sister vessels are separated by ownership, but Wind Surf's adopted family still keeps up ties with former officers. Club Med 2 is still the oceangoing presence of Club Med, the extremely European resort company that flourished in the 1980s and 1990s, stumbled in the early 2000s, and is now in the midst of a rebranding focused on upscale families. Club Med 2 sails in the Caribbean throughout the winter, offering cruises that mix relaxation with activities organized by Club Med's signature gentil organisateurs. Her cabins are similar to Windstar's in layout, but with a slicker, more cool-European aesthetic.

Windstar's Wind Surf also sails the Caribbean though March, then transfers to Europe for Mediterranean cruises through the summer and fall. 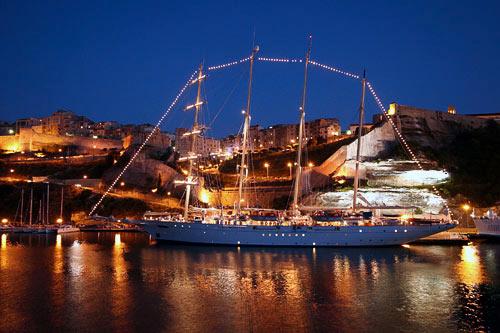 Star Clippers
Soft Sailing, Indelible Memories
When all is said and done, the romance of sailing ships enhances the romance of their destinations -- those lush islands of the eastern Caribbean, those historically resonant (dare I say evocative?) ports of the Mediterranean, all completely timeless, as much a part of the 21st century as they are of the age of sail.

Even if today's big sail-cruisers are a little bit of smoke and mirrors, in the end, it's the romance that takes us away.