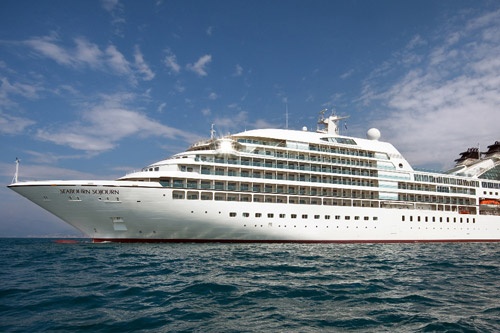 What It's Like to Cruise a Seabourn Luxury Liner

By
Chiseled Features & Champagne for Blood
By Matt Hannafin

Last month, luxe line Seabourn's newest vessel, the 32,000-ton, 450-guest Seabourn Sojourn, left Europe for the first time since her June launch, sailing transatlantic from Lisbon to offer a handful of Caribbean and Panama Canal trips before her inaugural world cruise, which departs Los Angeles on January 5. Somewhere in the middle there, I hopped aboard for a few days, to catch the flavor of the scene.

It was the first time I'd actually sailed with Seabourn -- sort of remarkable considering I've been covering cruises since 1997. I may be a populist at heart, a wannabe Steinbeck with more sarcasm than fight, but Seabourn had me at, "I'll take care of that for you, sir." 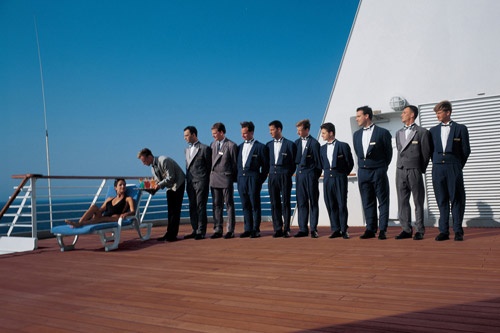 Yachts of Seabourn
No Thanks, But Do You Have Any Grey Poupon?
Sojourn and her near-identical older sister, 2009's Seabourn Odyssey, represent an updating of the classic Seabourn experience, which has remained more or less consistent since the line's creation in 1987. The watchwords are calm, relaxing, smooth, and super-professional. Like all the Seabourn ships (and like all real luxe vessels, for that matter), Sojourn is less about knocking passengers over the head with gimmickry, shininess, and nonstop activity, and more about providing a tasteful, understated venue where people who just want to relax can do so, while quiet, polite staff scurry around bringing you things: a cup of tea and a cucumber sandwich in the afternoon, suntan lotion while you're out by the pool, a drink from the bar whenever you want (gratis), and even a moist wipe for your sunglasses, if a server spots a smudge. No kidding: Someone actually offered me one while I was splayed in a deck chair one afternoon, near comatose from the realization that I didn't have to do anything at all while I was on board except lay back and let the experience happen.

Photo Caption: Over-the-top service on the top deck of the Seabourn "Sojourn."
advertisement 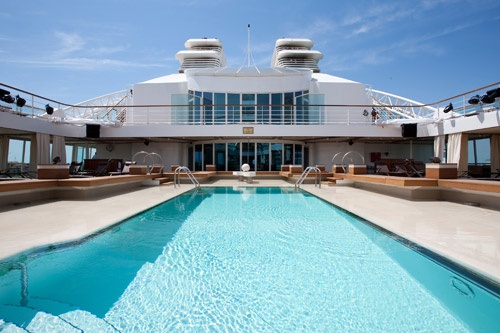 Yachts of Seabourn
A Place in the Sun
About twice the size of Seabourn's three older vessels, Sojourn and Odyssey (and third sister Quest, coming in 2011) use their extra space to great advantage. On the understated pool deck, guests can laze in comfortable deck chairs that, unlike on many larger ships, aren't pushed so close together that you feel like you're flying coach. The nicely sized pool is framed by two elegantly sized whirlpools (not too big, not too small), and there's additional sunning space just above on Deck 9.

Way up toward the bow on Deck 11, the Sun Terrace is probably the quietest outdoor space onboard, while the aft deck behind The Club (the ship's nightclub and general purpose lounge) has a second small pool plus two whirlpools, lounge chairs, and tables. It 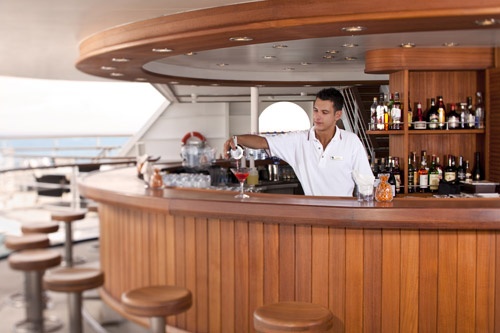 Yachts of Seabourn
Drinks Are on the House
While Seabourn's rates are high (starting around $2,500 for weeklong itineraries), they do buy you some nice goodies and perks, including large and plush staterooms, complimentary crew gratuities, and unlimited wine, beer, and spirits. When you board, you'll find a bottle of chilled Champagne waiting on your table and bottles of your favorite booze waiting in your in-suite bar (you choose them ahead of time). Drinks are free, too, at the ship's bars and lounges and at meals. About 18 different wines are generally available on a complimentary basis, and an extensive list of extra-cost vintages is available as well.

Photo Caption: The Sky Bar on the Seabourn "Sojourn."
advertisement 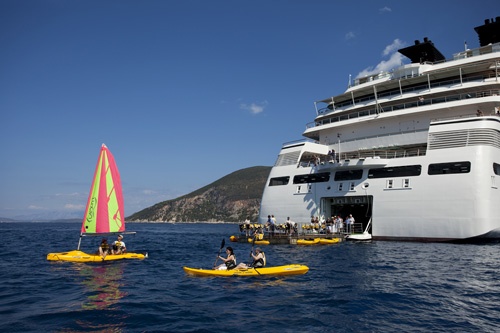 Yachts of Seabourn
Taking the Waters
All the Seabourn ships have retractable watersports marinas that unfold from their sterns, allowing guests direct access to the sea for water-skiing, windsurfing, sailing, pedal-boating, banana-boat rides, kayaking, and swimming. Weather and sea conditions (and local ordinances) permitting, the marinas are deployed on special "marina days" when the ship is at anchor. 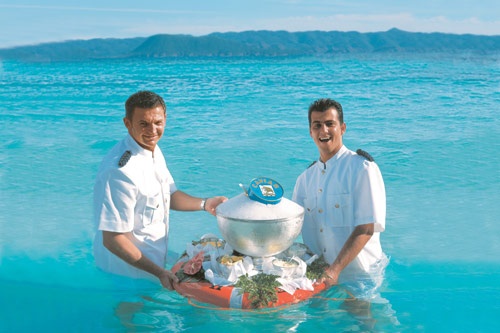 Yachts of Seabourn
Lifestyles of the Rich and Indulgent
Once per cruise in the Caribbean, Seabourn's ships offer an indulgence that's been a staple on their cruises since the beginning. It's called "Champagne and Caviar in the Surf," and that's exactly what it is: In the morning, crewmembers go ashore at places like Prickly Pear Island (in the British Virgin Islands), Mayreau (Grenadines), or Hunting Caye (in Belize's barrier islands) and set up a grill, shaded beach chairs, a full bar, and tables with fine china and silver service.

Guests step from the landing boats onto a red carpet laid across the sand and find galley staff preparing steaks, jumbo shrimp, grilled local seafood, and other meats, plus a huge selection of antipasti, salads, soup, breads, and desserts. Pastas are prepared to order at a flambé trolley. If you want to swim, you won't miss much: At some point, uniformed waiters will wade out waist-deep to serve you iced champagne and caviar from a custom life-ring or surfboard. In some societies, people aspire to this kind of thing. In others, it sparks revolutions. Take your pick.

Photo Caption: Caviar in the Surf, just next to Seabourn's "Sojourn."
advertisement 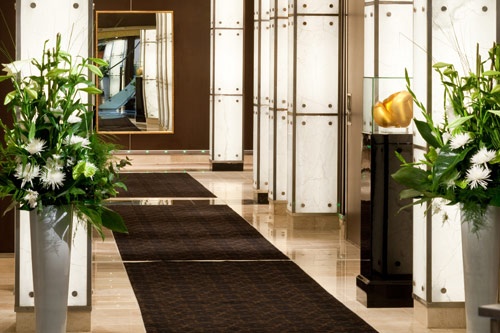 Yachts of Seabourn
High Style, sans Fluff
As it should be, Seabourn Sojourn is very posh in that understated, unflashy but obviously expensive kind of way -- more Coco Chanel than rococo carnival. Where many ships slather their public rooms and corridors with wild colors and textures and eye-catching artwork, Sojourn goes the other direction, with little ornamentation to clutter up the effect of its beautifully designed wood, leather, marble, and onyx interiors. A smattering of modern art prints decorate some cabin corridors, but the only novelty artworks I noticed aboard were a small, shiny, metal sculpture of a dachshund leashed to a hook on Deck 5 and a scale model of a classic wood-hulled speedboat decorating an elevator lobby -- the latter a shorthand for wealth (or aspiration) if ever I saw one. 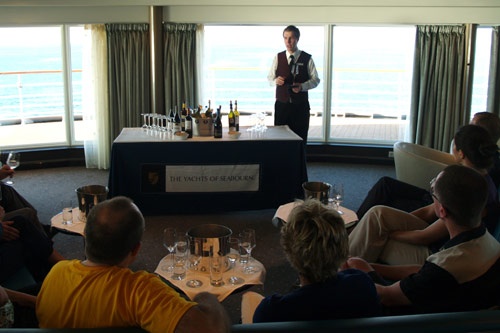 Matt Hannafin
Activity, if You Want It
On the whole, Sojourn maintains a nice sense of quiet, with almost no announcements, little in the way of cluttersome muzak, and none of loud, in-your-face activities you find on many mainstream ships. For the most part, passengers are left alone to enjoy conversation or commune with their inner selves. Activities, such as they are, include wine tastings, yoga and ballroom dance classes, cooking lessons, bridge games, and golf-putting and shuffleboard tournaments. Many cruises feature guest lecturers, who might be well-known chefs, scientists, historians, authors, retired diplomats, wine connoisseurs, or TV directors.

Recent-release movies are available for viewing in cabins, and movies are sometimes shown out on deck as well, with popcorn. At night, you can find small production shows in the Grand Salon, dancing in The Club, quiet music in the Observation Bar, and gambling in the small casino. Movie fans may find it hard to resist the on-demand selection on their stateroom TV, which is the largest and most varied I've ever seen aboard a ship.

Photo Caption: A wine seminar at The Club onboard the Seabourn "Sojourn."
advertisement 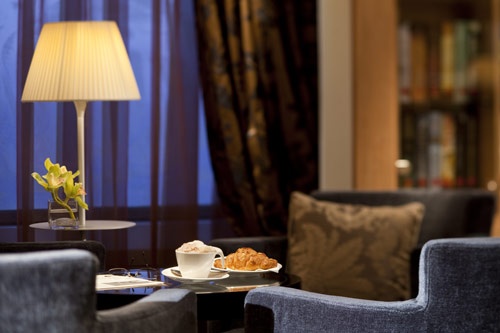 Yachts of Seabourn
Coffee, Tea, and the Place to Be
There's just something about the lifestyle aboard Seabourn that compelled me, willed me to The Club every day for afternoon tea -- with silver tea sets, cucumber sandwiches, and honey brought by servers in tiny individual pots. It's all so civilized.

Those with more of a coffee craving (me, on a normal day) can head to the Coffee Shop in Seabourn Square, a casual area in the stern on Deck 7 that serves as a combination lounge, cafe, library, Internet center, concierge/help desk, and all-purpose "Meet me at the Square" destination. Staffers stationed at four central desks (not counters; much more civilized) can take care of all your administrative needs, including purser services, money exchange, shore excursion reservations and information, future cruise bookings, or even to lend out an iPod or notebook computer. At the cafe, you can choose from a selection of classic specialty coffees and pastries, or take advantage of full bar service.

Photo Caption: Coffee and a croissant at Seabourn Square, onboard the "Sojourn." 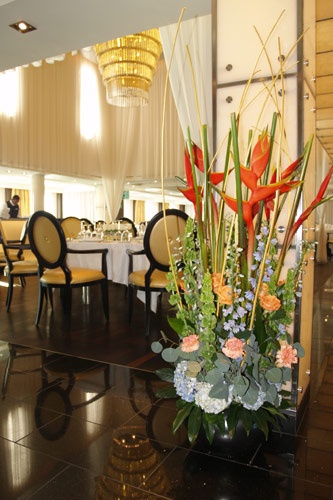 Yachts of Seabourn
Classic Heaven
Sojourn's main restaurant, straightforwardly called The Restaurant, is just stunning, all white and pale gold, with a glinting chandelier overhead, a phalanx of white roses on each table, and billowing white curtain dividers that add intimacy. Tables seating 2, 4, 6, and 10 are spaced out beautifully around the room, which can seat 450 guests at a time -- more than enough for everyone on board, if by some change everyone showed up at the same time (unlikely, as guests can arrive at their leisure anytime between about 7 and 10pm). The central two-story section of the room is the grandest, but the tables for two and four along the windows are also very appealing. Dinner service is, of course, high style, with attentive and unobtrusive service and multicourse meals designed by celebrity chef and restaurateur Charlie Palmer.

Photo Caption: Entering The Restaurant on the Seabourn "Sojourn."
advertisement 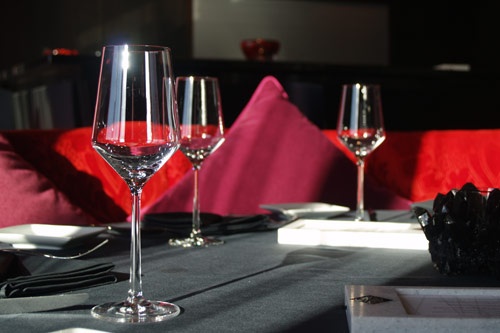 Matt Hannafin
Specialty Heaven
Like all the Seabourn ships, Sojourn offers a specialty dinner option called Restaurant 2, which features five- to six-course tasting menus for up to 72 guests per night, with no cover charge but reservations suggested. The ambience is more casual here than at the Restaurant, but the presentation is beautifully intimate and precise -- matching the jewel-like quality of the dishes, which tend toward meats and seafood, with exquisite accompaniments. 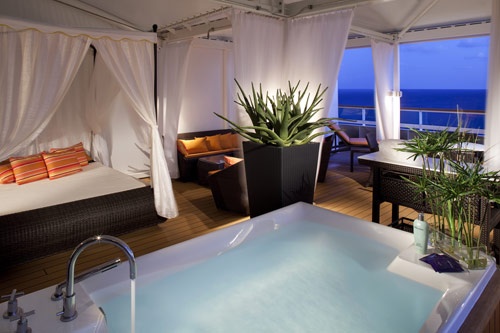 Yachts of Seabourn
Died and Gone to Heaven
Sojourn's spa complex, called simply The Spa at Seabourn, is notably large for a vessel this size, encompassing 11,400 square feet of treatment rooms, salons, a small gym, aromatherapy steamrooms, and a cabana-style indoor/outdoor relaxation area with a small pool, heated recliners, and something called a Kneipp Walk, a circular pool divided into two sections filled with warm and cold water. Guests walk around the basin, going from warm to cold and back again, allegedly stimulating their capillaries and improving their circulation. Or so they say.

For the ultimate spa experience, guests can book a private Spa Villa, outfitted with a curtained daybed, a spa tub large enough for two, a private balcony for sunbathing, a dining area for healthy snacks, and a treatment space where a masseuse provides private treatments, either for one or two guests at a time. 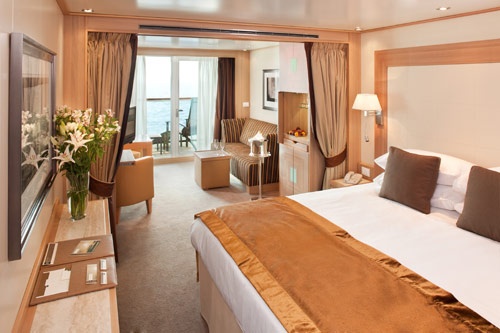 Yachts of Seabourn
A Home on the Sea
Sojourn's 225 spacious suites are all outside, the vast majority (199 of them) with private balconies. All are done in a softly muted color palette, with understatedly fashionable furniture that doesn't clutter up the space or distract by being over-the-top plush. The Veranda Suite (pictured) is the most common accommodation on board, spreading out over about 300 square feet and offering a 65-square-foot balcony, separate bedroom and living room areas, queen-size bed, walk-in closet, flatscreen TV, fully stocked bar and fridge, and a large marble bathroom with separate tub and shower.

At the high end, the nearly 1,000-square-foot Wintergarden Suites offer two bedrooms, a separate dining area, a butler pantry, huge balcony, and a glass-enclosed solarium with a whirlpool tub and day bed. 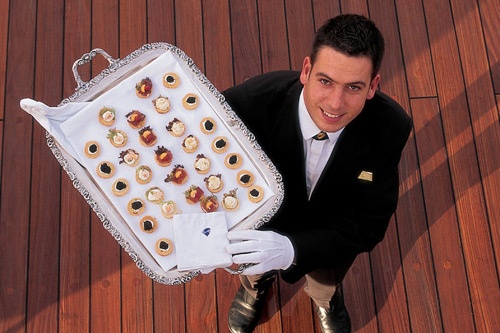 Yachts of Seabourn
And Finally, Monsieur, a Wafer-Thin Mint
What can I say? I succumbed to the indulgence. Though my natural inclination is toward The People's Vacation, I also have an appreciation for quality, and Seabourn is that: There's no cheapness here, no cutting corners on the assumption that the guest won't know any better. Everywhere, in everything -- from her sleek design and gorgeous materials to service that's so polished it's nearly transparent -- Sojourn shines.