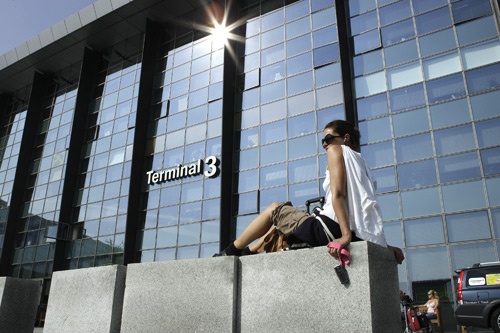 By
Gateways to Productivity
By Sean O'Neill

We salute the world's most efficient airports for business travelers: LAX, JFK, Heathrow...

Giving us hope for the future, our favorite airports excel at getting business travelers from point-to-point. We define the "best" as the "most efficient airport," not necessarily as a "major global hub." We did our homework and studied user ratings and awards, but it took more than statistics to impress us. We awarded bonus points to airports with alluring in-terminal hotels, streamlined baggage claim service, and snappy train service to vital business districts. 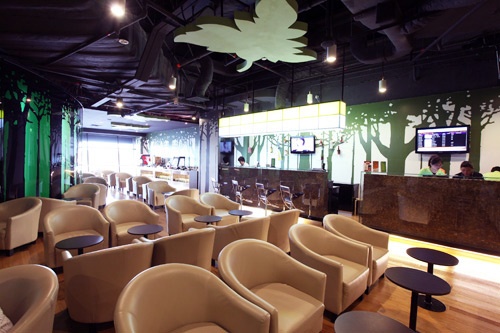 Among all of the free amenities at Changi -- Internet, child-free snooze rooms, and films in three movie houses -- we call dibs on the butterfly garden with the 27-foot waterfall. At the Changi Airport, we've even heard of walkie talkie-waving airport workers helping business-class passengers make tight connections by guiding them from gate to gate.

How to Get Downtown: A 35-minute MRT commuter rail trip to Raffles Place Station, near the financial district 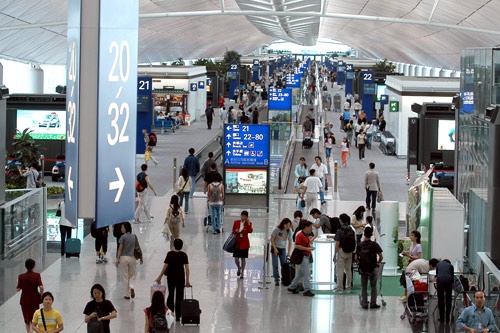 Even the most jet-lagged of business travelers can manage Hong Kong's main airport well. At two downtown train stations, you can check your luggage and print your boarding pass for return flights on United, Continental, Cathay Pacific, and some other airlines. The train stops right inside the terminal. Between the train and the gates, there are no stairs or escalators. When your flight is delayed, there's a nine-hole, golf course nearby Terminal 2, with night play.

How to Get Downtown: A 20-minute ride on the Airport Express line (MTR) Rail to Kowloon Station 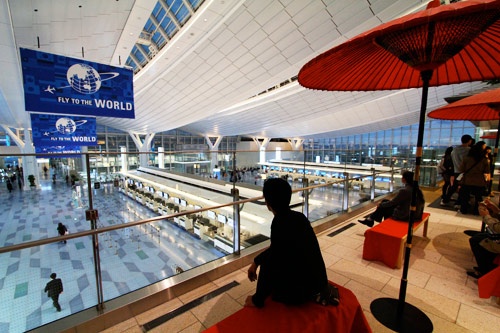 It's not merely a half-hour closer to central Tokyo than Narita. Haneda Airport's new international terminal, which opened in October 2010, has a departure hall that is far better than Narita's McFoodCourts. It delivers a locally authentic vibe, lined with traditional Japanese shops, like the stationer Itoya.

How to Get Downtown: A 45-minute ride (with two connections) to Shinagawa, the city's largest station 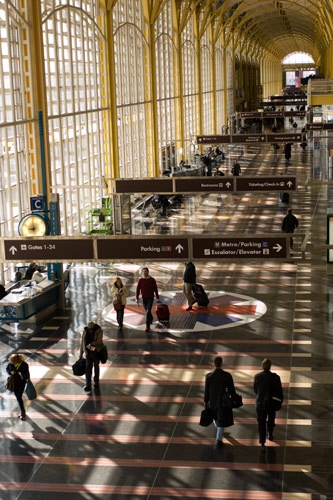 Many of this airport's windows frame views of the nearby cityscape. Separate security lines at each tiny terminal speed up passenger processing, and ample seating at the gates makes for a pleasant wait. Warning: Like all things in this town, the airport's name is political: Republicans call it "Reagan," Democrats call it "National," and Libertarians call it "a boondoggle."

How to Get Downtown: A 25-minute ride (with one connection) to Union Station, next to the Capitol building 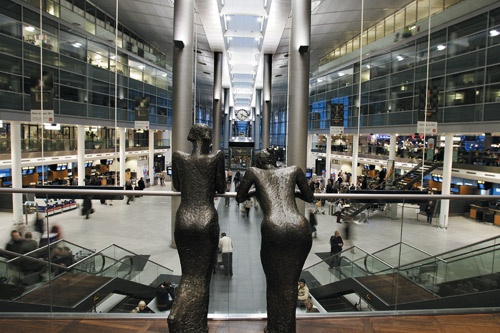 The best-connected of Nordic airports -- which is kind of like saying "the hottest supermodel" -- Kastrup Airport epitomizes efficiency. Electronic boards report to the minute when your luggage will arrive.

How to Get Downtown: 13-minute train connects to Copenhagen Central 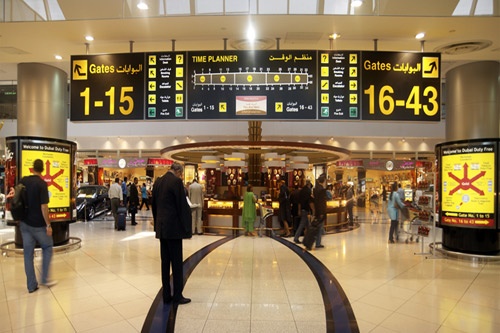 Dubai International stands out for offering key amenities 24-hours-a-day, such as free Wi-Fi in its palm tree-studded lounges, a health center with showers, a gym, and a swimming pool that can be accessed for about $8 an hour. There's also 58,000-square feet of duty-free shopping. Bonus perk: hotel rooms are available within Terminals 1 and 3.

How to Get Downtown: Roughly a 20-minute taxi ride 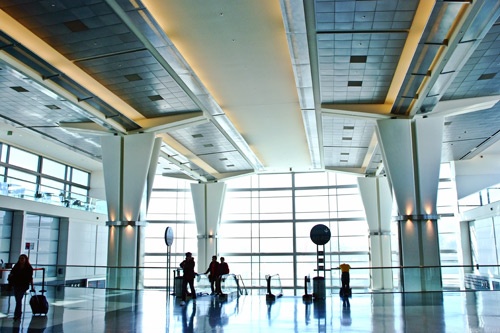 In spring 2011, Terminal Two will rise again after a $383 million renovation. It's expected to have plug-in power outlets near every seat, 10 security lanes serving 14 gates, and post-security "recuperation" areas. The original terminal is also a gem, with free Wi-Fi (since August 2010) and relatively quick passports-and-customs processing.

How to Get Downtown: A 30-minute light-rail BART ride to Embarcadero Station, near the Financial District. To reach Palo Alto or Mountain View, take the Bart  and then Caltrain for a 30-minute trip each way. 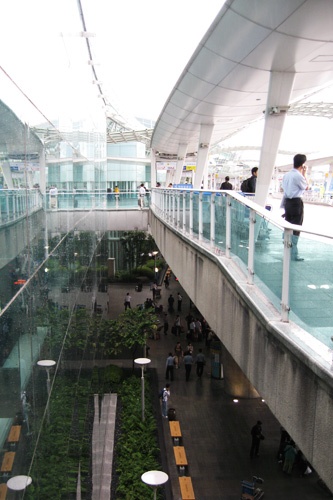 This airport has many perks: a transit hotel inside the customs barrier, information booths with English-speaking staff, two relaxing gardens, and a futuristic train terminal arrival hallway. Happily, you may not need to wait around and take advantage of any of those amenities, because 83 percent of planes arrive and depart here on-time, according to the website FlightStats.

How to Get Downtown: A 90-minute ride in a white or yellow taxi to the business district 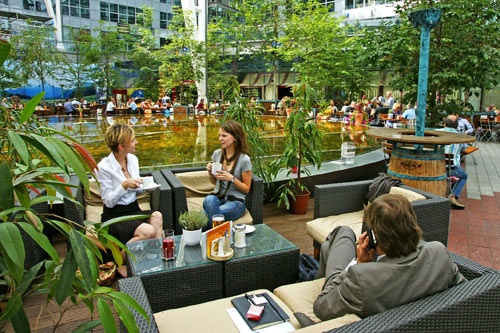 Who can't love an airport with its own authentic Bavarian brewery? Stop by Airbräu to sip pints of lager at a communal wooden table; there's even outdoor seating in good weather. Then stroll this airport's clean corridors, which are as sleek as a BMW showroom, and, in fact, often showcase new BMW vehicles.

How to Get Downtown: A 45-minute ride on Deutsche Bahn downtown 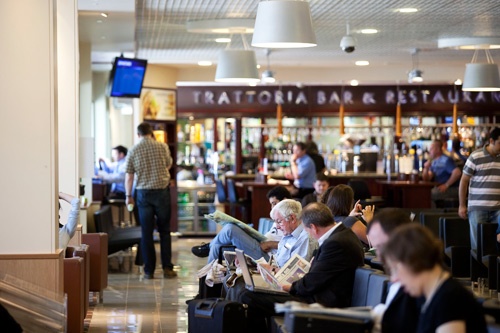 Located in the Royal Docks area next to the Financial District, hedge fund-owned London City Airport is a royal treat for Americans flying from New York-JFK on British Airways. Rapid baggage claim, quick international arrivals processing, and an in-terminal rail connection help reduce the time you have to spend here.

How to Get Downtown: An 18-minute ride on the DLR line and the Underground's Jubilee Line to Canada Water Station, near the Financial District