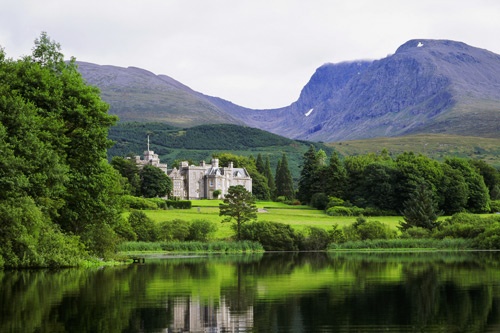 With its moors, highlands, and lochs, Scotland offers many options in the way of romantic vacations. Members of the royal family and aristocracy have been traveling to Scottish castles and manor houses for hundreds of years. Luckily, some historic properties have been turned into luxurious castle hotels, so you too can live like kings and queens for a night—but save up, because on occasion, the rates may instantly turn you into a pauper. But part of planning travel is dreaming of living like royalty. 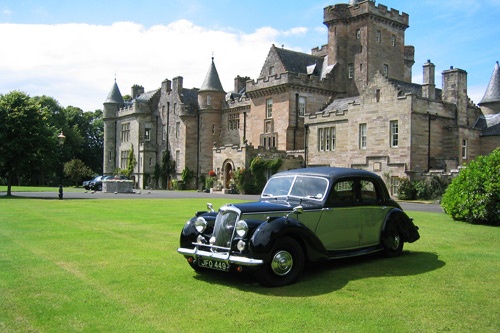 Courtesy Glenapp Castle
Glenapp Castle
What: Glenapp was built in 1870, which makes it one of Scotland's younger castles -- and thus one of the most well-preserved. The castle has retained its original Victorian character by showcasing original artwork and period-appropriate antiques in every bedroom.

Guests can enjoy the castle's 30 acres of grounds, including a walled garden and a 150-foot Victorian glasshouse. Croquet and tennis are also available.

Where: Ballantrae, in Ayrshire, about 70 miles southwest of Glasgow.
How to Get There: Glenapp is 73 miles from Glasgow Airport. The castle is on A-77 heading toward Stranraer.
When: Open year-round; summer is high season.
Price: Standard luxury double rooms for more than $600 per night
More Info: www.glenappcastle.com 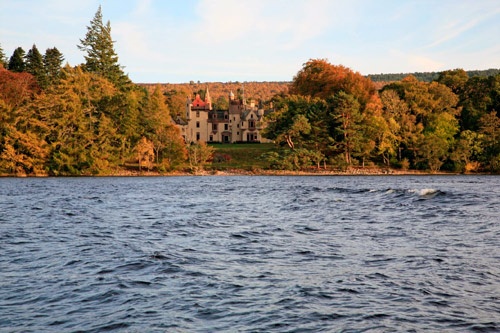 Courtesy Abercrombie and Kent Villas
Aldourie Castle
What: Aldourie Castle is the only habitable castle on the shores of the famous Loch Ness. The property was initially recorded as a mansion house in 1626. Due to its classic Scottish Baronial architecture and prime geographic position, Aldourie became a popular destination for the royal family and their court during Victorian times.

Today, guests at Aldourie live like royalty while exploring the castle's regal grounds and many perks. A private staff is available to assist guests with meals, housekeeping, and concierge services.

Where: Loch Ness in the Highlands region, about 17 miles from Inverness Airport.
How to Get There: Aldourie Castle is north of Dores, on the east shore of Loch Ness. It is seven miles southwest of Inverness, on the B862.
When: High season is from June to August. May, September, and October offer nice weather with fewer crowds.
Price: The 15-bedroom castle is available for private rentals. Nightly rentals start at more than £6,400. Photos are free.
More Info: www.aldouriecastle.co.uk 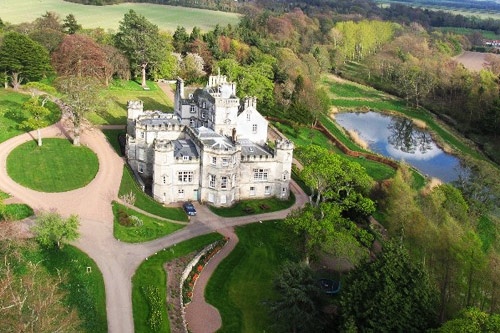 Courtesy Winton House
Winton House
What: Winton House was built in 1480, with additions in the 17th and 19th centuries. Henry VII ordered the original tower to be destroyed during the period known in Scotland as the "rough wooings." Around 1620, it was rebuilt for the Earl of Winton under the direction of William Wallace.

Today, the house is still regarded as a crown jewel of Scottish Renaissance architecture and décor. Work by many famous artists—such as Van Dyck, Van Goyen, Canaletto, Raeburn, and Ramsay—are on display in Winton House.

Despite being such a popular venue, Winton House has kept its family pride intact. The existing owner, Sir Francis Ogilvy, lives on the property and has been known to enjoy céilidh dancing with guests.

Where: Pencaitland, East Lothian, about 14 miles southeast of Edinburgh.
How to Get There: Edinburgh Airport is 23 miles from Winton House. The hotel is off of B-6355 on the road through New Winton.
When: July and August are peak times, as are Christmas, New Year's, and Easter.
Price: Rates start at £1,300 per weekend and £1,800 per week—no wonder it's used mostly for dream weddings.
More Info: www.wintonhouse.co.uk 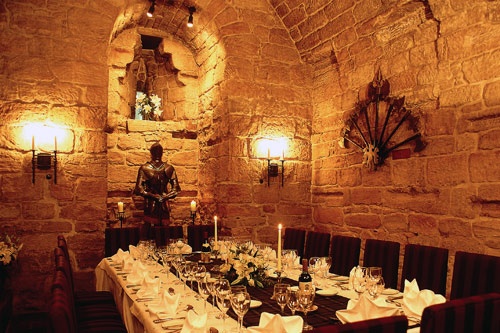 Courtesy of Dalhousie Castle
Dalhousie Castle
What: Dalhousie Castle was built in the 13th century, and its original thick walls at the foundation level and vaults still remain today. Back then, the only access to the castle was by crossing the moat on a drawbridge. Today, visitors who want an experience beyond the authentic décor can dine at the Dungeon Restaurant, an ancient vaulted dungeon that now serves traditional Scottish cuisine.

The castle has a strong connection to Scottish history. It was the previous seat of the Earls of Dalhousie, King Edward I visited prior to the Battle of Falkirk, and Mary, Queen of Scots, stayed in 1563.

Where: Bonnyrigg, in the Midlothian region, about 9 miles southeast of Edinburgh.
How to Get There: Dalhousie Castle is located 15 miles from Edinburgh Airport. The hotel is on B-704, off A-7.
When: Open year-round; June, July, and August are the busiest months.
Price: Rooms start at £120 per night. Finally—a castle you may be able to afford!
More Info: www.dalhousiecastle.co.uk 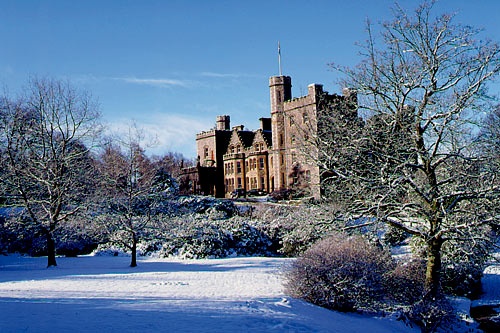 In 1873, Queen Victoria fell in love with Inverlochy while visiting. Other famous guests of this 17-room hotel include Liam Neeson, Charlie Chaplin, Sean Connery, and J.K. Rowling. The cast and crew of the Harry Potter movies often stayed at the castle while filming.

Where: Fort William, in the Highlands region, about 62 miles southwest of Inverness.
How to Get There: Inverlochy Castle is 102 miles from Glasgow Airport. The hotel is off A-82.
When: Open year-round, but prime times to visit are in the summer and fall.
Price: Double rooms in the zone of £350 per night
More Info: www.inverlochycastlehotel.com
advertisement 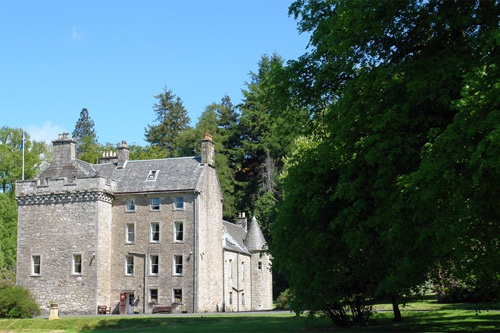 Courtesy Culcreuch Castle Hotel
Culcreuch Castle Hotel
What: For something off-the-beaten path, spend a night at a haunted Scottish castle. In 1582, a member of the Galbraith family mortally wounded a member of the Buchanan family during dinner at Culcreuch. Buchanan's mistress (an accomplished musician) is believed to have played pipes to soothe Buchanan while he died. The "Phantom Piper" is often heard in one particular room of the 10-bedroom castle; the phenomenon has gained the attention of numerous scientists and supernatural enthusiasts.

Culcreuch Castle was built sometime between 1296 and 1320, most likely by the Galbraith clan. The four-story tower was rebuilt toward the end of the 15th century. In some places, the stone walls are about nine feet thick.

Where: Fintry, Stirlingshire, about 20 miles southwest of Glasgow.
How To Get There: The castle itself is 29 miles from Glasgow Airport. Culcreuch Castle Hotel is on Kippen Road (B-822).
When: The castle is closed around Christmas and for the first two weeks of January. This is a very popular wedding venue, so weekend bookings can be difficult.
Price: Rates generally £100–£200 per person per night, including breakfast.
More Info: www.culcreuch-castle-hotel.com
Arts and Culture
Honeymoons
Hotels
Local Experiences
News