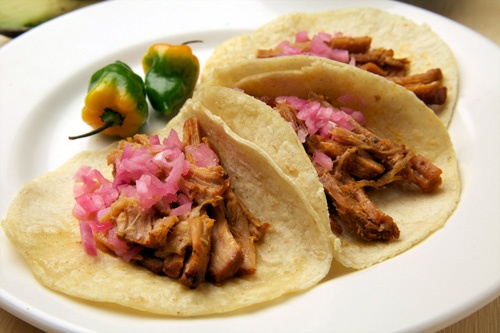 By
A Taste of Mexico: Plate by Plate, Bite by Bite
By Zora O'Neill
www.rovinggastronome.com

Mexico stretches from the Atlantic to the Pacific over more than 750,000 square miles -- all of them filled with a tempting array of things to eat. The country's culinary heritage is built on indigenous traditions and ingredients (chiles galore!), European influences, and even more recent contributions from immigrant groups. Take a tour of Mexico, plate by plate. 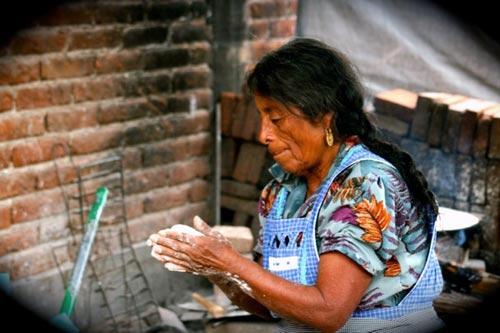 Frommers.com Community
Manchamanteles in Oaxaca
Oaxaca claims seven distinct moles, or sauces based on complex spice pastes. Of these, manchamanteles is one of the most delicious -- and the most fun to say. The name means "tablecloth stainer," a nod to the deep red sauce that's usually served with beef or pork. Luckily, you'll be so busy slurping it up that you won't care if you're making a mess. As with all good moles, it's a balance of sweet and hot: Intense ancho chiles meld with pineapple and rich spices like cinnamon and clove.

Where: Manchamanteles is a typical Sunday-lunch dish. Seek out more formal restaurants in Oaxaca's capital city, and wear a shirt you can afford to lose. 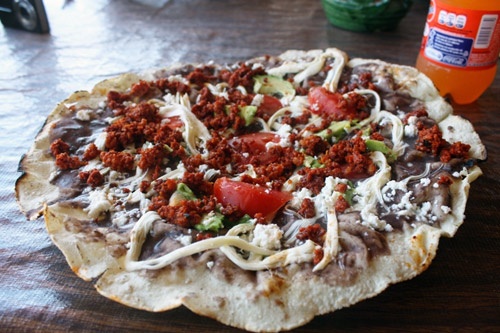 hija del caos
Tlayudas in Oaxaca
Oaxaca gets two slots on the list because it's perhaps Mexico's most food-centric state. The signature snack here is the Mexican equivalent of pizza. The base of a tlayuda is an extra-large, extra-thick corn tortilla that's cooked on a dry griddle or a grill. While the bottom is getting a black-spotted chewy crust, the cook smears on a layer of refried beans (liberally seasoned with lard), then scatters on crumbly white cheese, avocados, and other toppings of your choice: grilled cactus-paddle leaves (nopal), spicy beef strips (cecina enchilada) or even that Oaxacan favorite, fried grasshoppers.

Where: Tlayudas are snack food -- look for them around market areas, such as Oaxaca's sprawling Central de Abastos, where they can provide sustenance to keep you shopping. 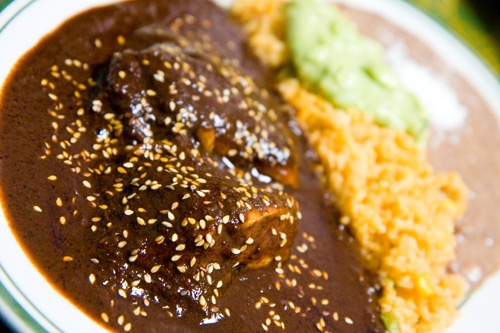 gsz
Mole poblano in Puebla
You can eat mole poblano -- a mysterious sauce made of spices, nuts, and chocolate -- all over Mexico, as it's practically considered the national dish. But it gets its name from the state of Puebla (poblano = "from Puebla"). Typically served with turkey, this is by far the richest and thickest of the moles, getting its body from raisins, ground almonds, and sesame seeds). It's also the most symbolic sauce, representing the melding of indigenous Mexican tradition and European influence, allegedly invented by nuns at the Convento de Santa Rosa but incorporating ingredients unique to Mexico.

Where: The Fonda de Santa Clara in Puebla is legendary for its mole, but you can find other great examples all around the state -- and the country. 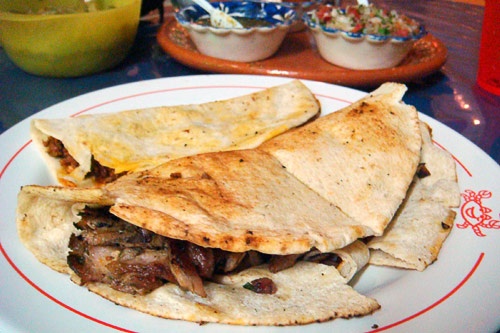 Zora O'Neill
Tacos árabes in Puebla
Like its neighbor to the north, Mexico is a melting pot. One of the largest immigrant groups is the Lebanese, who brought their own substantial culinary heritage with them in the early 20th century. "Arab tacos" are so named because the meat is cooked on a vertical skewer, and instead of tortillas, the meat is served in puffy flatbread. Sounds suspiciously like shawarma -- but the Mexican influence comes in the variety of meat (though lamb is typical, it can often be beef or even pork) and the array of spicy salsas that come on the side.

Where: Look for shops where the meat is cooked against charcoal, rather than gas. And outside of Puebla, don't get your hopes up -- tacos árabes can also refer to tacos made of red chile-seasoned pork cooked on a vertical skewer. 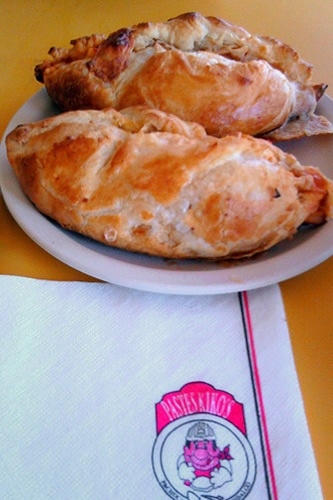 jrsnchzhrs
Pastes in Hidalgo
If tacos árabes take you by surprise, wait until you bite into a paste, a popular snack in the mountainous areas of the state of Hidalgo, northeast of Mexico City. The little meat-and-potato-filled turnover (about as big as your hand) is none other than the Cornish pasty, brought to Mexico by tin miners in the early 19th century and given a typically spicy overhaul with the addition of beans, spicy chorizo sausage, chicken mole and more. (Fun fact: Those same Cornish miners are also considered to be the ones who introduced fútbol to Mexico.)

Where: In Hidalgo's capital, Pachuca (where a towering clock chimes the same tune as Big Ben), the restaurant Real de Plateros serves up a dazzling selection of pastes. 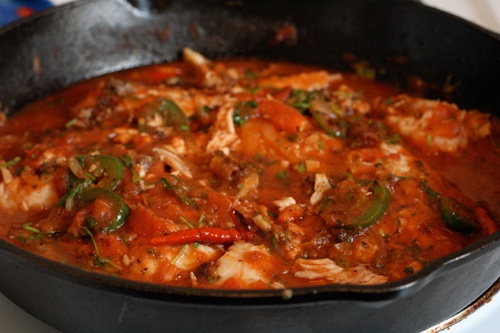 Jen SFO-BCN
Huachinango a la veracruzana in Veracruz
The Gulf state of Veracruz, long a trading hub, enthusiastically embraced European spices and cooking techniques. One of its signature dishes is fish, usually snapper, prepared a la veracruzana, simmered in a tomato sauce that delivers a punch with cinnamon, bay leaf, green olives, garlic, and pickled jalapeños. With a side of fragrant rice and a view over the waterfront, it's the history of this port city on a plate.

Where: Head down to Veracruz's jumping seafood market for lunch; nearby restaurants serve the freshest catch. 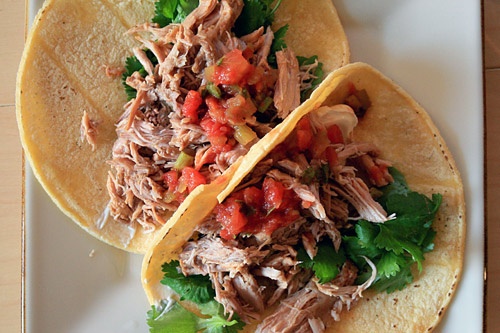 Mike McCune/Wikimedia Commons
Carnitas in Michoacan
Pork is braised for the better part of a day, until the meat is near-melting, then the braising liquid is boiled away until the meat is sizzling in its own rendered fat. This creates an outer layer that's addictively crispy, chewy, and slightly caramelized. Once the meat reaches the perfect texture, it's served up on platters with tortillas for make-your-own tacos. Garnish with cilantro, radishes, guacamole, beans, and more. The savvy carnitas eater can request particular parts of the pig.

Where: Throughout Michoacán, you'll recognize a good carnitas operation by the giant shallow copper pans in which it's cooked (enabling more surface area to get that golden crust), and the ever-more-intense aroma that emanates from it as the day goes on. 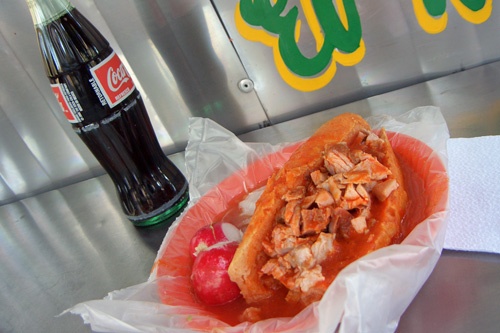 El Gran Dee
Tortas ahogadas in Jalisco
Tortas (sandwiches on fluffy rolls) are all over Mexico, stuffed with various meats and cheeses. But they reach their finest form in Mexico's second city, Guadalajara, where they're stuffed with roast pork, then drowned (ahogada) in a lush red sauce made from the dangerously hot chile de árbol. The result is impossibly messy to eat (forks are frowned upon), but that doesn't stop adoring fans.

Where: Guadalajara's soccer stadium, jammed with fans, is ringed with vendors selling the messy meal, but you can pick it up at street stalls all over the city. 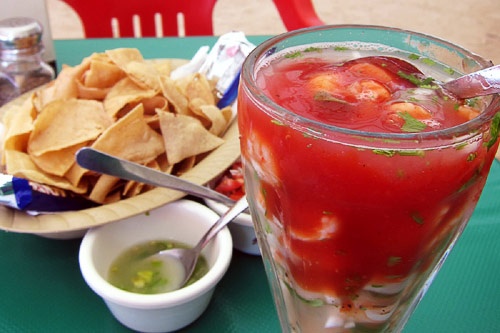 Zora O'Neill
Cocktel de camarones in Campeche
Forget that prissy shrimp cocktail you know from golf-club buffets and old-school steakhouses. A Mexican cocktel has a lot more flair. To start, the shrimp are pulled straight from the Gulf of Mexico, briefly cooked, then doused in a tomato-based sauce that's a little bit spicy, a little bit sour. Chiles replace the horseradish of typical cocktail sauce, and a little bitter orange juice often gives an exotic citrus note. (Some cooks swear by -- no lie! -- a dash of orange Fanta.) It's all piled in big tapered ice cream-soda glass and seasoned with chopped sweet onion and sometimes chunks of avocado. Saltine crackers are the traditional side, though you can get corn chips (totopos) too.

Where: The small town of Champotón is famed for its cocktelerías, super-casual kiosks that dot the roadside the full length of town. The best operations sprinkle fried garlic on their totopos. 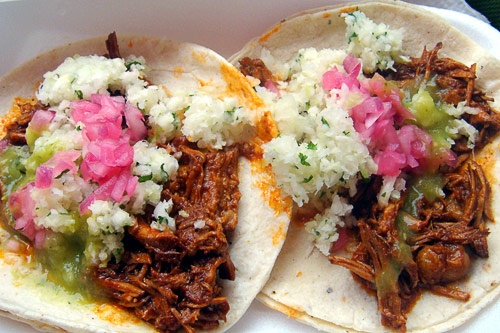 Zora O'Neill
Cochinita pibil in Yucatán
Traditional Yucatecan cooking often takes place in a pit dug in the ground -- a pib in the Mayan language. These days, cochinita pibil is just as often made in an oven, but this slow-cooked pork dish is still a crowd-pleaser. Pork is marinated in bitter orange juice and a recado (spice paste) of garlic, allspice, and bright-red annatto seeds. It's all bundled up in a banana leaf and roasted for hours, then shredded and served on its own or in tacos, tamales, and more. And with hot-pink pickled onions on the side, the vivid orange meat looks as zingy as it tastes.

Where: Valladolid, the second city of Yucatán, is the region's food capital -- there's plenty of pibil to go around, along with more obscure regional dishes. 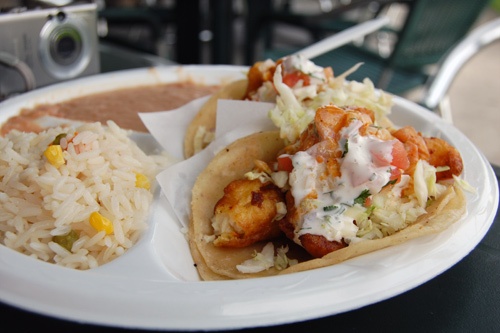 stu_spivack
Fish tacos in Baja California
Nothing complements beach-bumming like this most delish fish, fried in a light beer batter and wrapped in a warm tortilla. The best versions let the fresh fish shine through, with only a garnish of crispy shredded green cabbage, diced tomatoes, and a creamy sauce that's usually nothing more than thinned-down mayonnaise. Add a squeeze of lime, and you're good to go … right back to the beach.

Where: Ensenada claims to be the birthplace of the fish taco. Head to the main market there, the Mercado Negro, to sample the wares at their freshest. 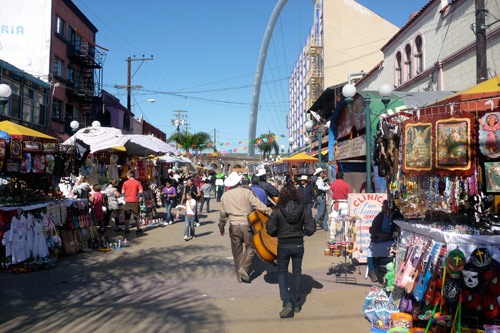 Marc van der Chijs
Ensalada César in Tijuana
This mix of crunchy romaine lettuce, anchovy-spiked dressing, and croutons has become such a staple of the American diet that its roots in Mexico have been all but forgotten. But in fact, the first Caesar salad was allegedly whipped up at a restaurant in Tijuana in the 1920s, when the city was hopping with Prohibition-era party people. The salad's namesake was the restaurant's owner, Italian-born Caesar Cardini. Legend has it that he did not include anchovies in the original recipe (nor, most certainly, grilled chicken strips).

Where: Caesar's received a loving restoration in 2009, as part of Tijuana's newly flashy dining scene. But just like the old days, you can still get a Caesar salad concocted tableside.