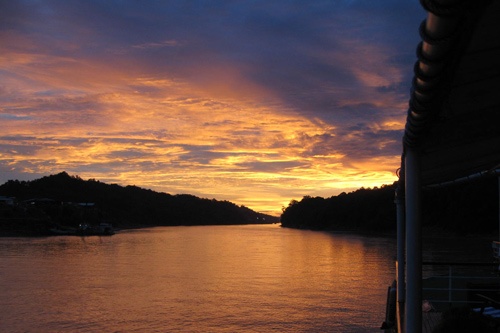 What It's Like to See Malaysia's Sarawak by River Cruise

By
River Cruising in Southeast Asia
By Heidi Sarna

Just like on the rivers of Europe, a river cruise in Southeast Asia is a great way to see life on the river banks up close. Boats can travel as close as a few feet from the shoreline, where villages and towns thrive because the river provides a source of water and a means of transportation.

In Sarawak -- one of two Malaysian states on the island of Borneo (the other is Sabah) -- Pandaw Cruises (www.pandaw.com) is the only company that offers river boat cruises on the remote Rejang River, Malaysia's longest river.

Check out these 8 reasons to see Sarawak by boat. 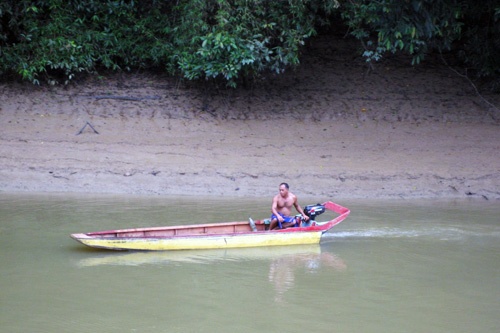 Heidi Sarna
You can't see Sarawak by road.
For centuries, life in the rain forests of Sarawak has revolved around its rivers and their tributaries, like the Rejang. The waterways were -- and still are -- a means of transportation though the thick jungle as well as a source of food. Narrow wooden long boats with small outboard motors (and in more recent years, express ferries modeled after Russian commando escape boats) transport locals up and down the river system. While Sarawak's major cities, from Kuching to Sibu, Bintulu and Miri, have a modern system of roadways, the river is still the primary way to travel between the cities or to Sarawak's remote towns and villages.

Photo Caption: Longboats are the best way to get around. 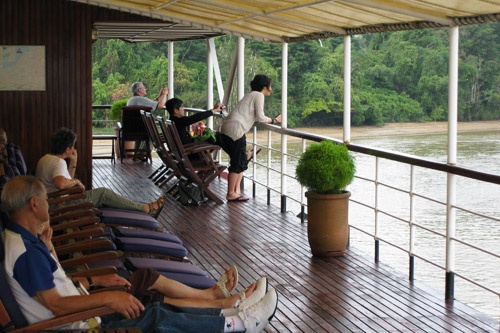 Heidi Sarna
You can enjoy the simple life.
Most areas of Sarawak that interest tourists are off-the-beaten track, so there are only very basic hotels, if any. A river boat is a floating hotel and the Orient Pandaw is like a comfortable inn. Expect roomy wood-paneled cabins with brass fittings and bathrooms with large showers. Rooms are air-conditioned and beds are very comfy. There are no TVs since the whole point of a Pandaw trip is to be entertained by the destination.

For those who need more, there is Wi-Fi up on the top deck. But otherwise, don't expect after-dinner entertainment besides socializing at the bar or watching one or two featured movies (we enjoyed a young Nick Nolte in Farewell to the King, which was set in Borneo).

Traveling with a small group on a boat also adds an appealing social dimension to visiting an exotic place like Sarawak. The Pandaw crowd is a well-traveled adventurous lot who really gets around.

For many, Borneo is one of the few places they haven't visited before. Passengers hail mostly from North America, Europe, Australia and New Zealand, and ages typically range from the 50s to the 80s.

We had 40 passengers on our sailing, from a sweet, fun-loving 63-year-old chemist from Switzerland to an American entrepreneur, Aussie teachers, and a retired British couple with homes in both Toronto and Spain who were usually the life of the party.

Photo Caption: The view from the deck. 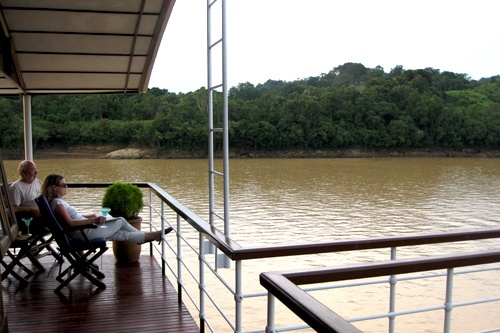 Heidi Sarna
You'll benefit from all-inclusive pricing.
As on most river cruises in Europe, fares for Pandaw's Borneo river cruises, as well as its Mekong and Irrawaddy river trips, include daily guided shore excursions and also soft drinks, bottled water, local beers and spirits, and wine at dinner.

On a small river boat, you'll want to claim one of the prime deck chairs on the bow just next to the bridge. Better than a seat in a car, bus, or airplane, these prime perches offer bird's-eye views and are positioned to catch cooling breezes. Best of all, the bar and frosty glasses of local Meister beer are just a few feet away.

Photo Caption: Enjoying the drinks and the view. 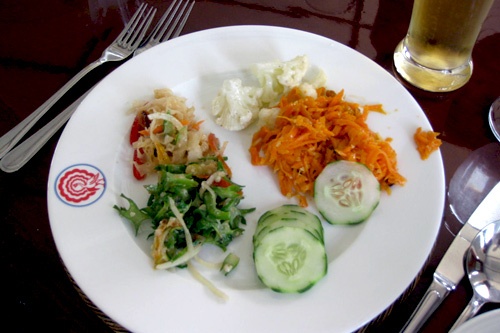 Heidi Sarna
You can sample local food as well as familiar staples.
Lunch and dinner onboard the Orient Pandaw featured local dishes typical to Sarawak as well as Western staples. The selection of four salads at lunch, for example, often featured local ingredients. During our daily excursions, our guide Louis would point out those ingredients (from fiddlehead ferns to pineapple and wild mushrooms) growing in the wild or in small farms.

On the day of the beach picnic, everyone raved about the chicken, rice, and vegetables cooked in the traditional Iban bamboo pot method -- inside hollowed out sections of bamboo. Western favorites were also always available, from fish-and-chips to BLTs and steak and eggs. Each evening at happy hour, a daily fruity drink special was offered up in the Sun Deck bar along with mini pizzas, prawn crackers, fried fish bites, and other snacks. 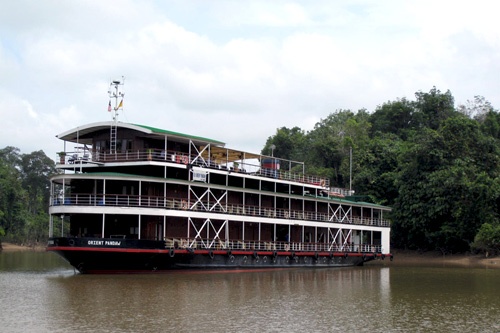 Heidi Sarna
You'll get a chance to get your feet wet.
The mini Orient Pandaw, a smaller excursion boat that trailed the main boat for the entire cruise, was used to shuttle passengers to shore and on various river excursions. One afternoon was spent on the mini Pandaw shooting some small-scale rapids on a remote tributary. Another day, it transported us to a picnic lunch set up on an isolated spot along the river, which we couldn't have reached any other way.

While most excursions were not physically challenging beyond walking in temperatures that reached the high 80s, there was one vigorous jungle trek that most passengers enjoyed. Only a few older folks with canes stayed back on the main boat. After a 30-minute drive by van, we set off for a hike that snaked through jungle streams (yes, we did get our feet wet) and up and down steep muddy hills.

Pandaw also offers two worthwhile add-on land trips to do before or after the Rajang cruise. Spend two days based in Kuching to see orangutans in wildlife parks and/or spend two days in the remote Mulu National Park, checking out four spectacular caves, including Deer Cave, the largest cave in the world. 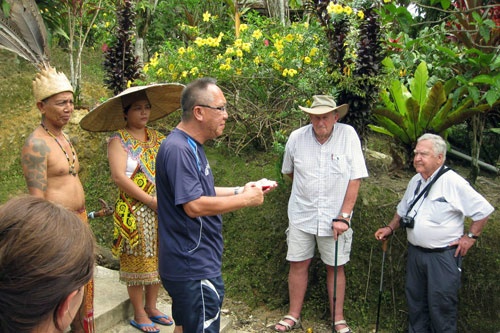 Heidi Sarna
A local guide comes along for the ride.
A knowledgeable local guide is on hand to help you understand the back story of the region and fills you in on current developments. Guide Louis Yap, who is part Chinese and part Iban, sailed with us and did an excellent job leading daily excursions and giving talks each evening before dinner.

Yap shed light on the complex culture of Sarawak's more than 30 ethnic tribes, including the Iban who practiced head hunting up until about 80 years ago. The Iban, along with several other groups, still follow traditions like getting body tattoos and hunting deer and wild boar with blowpipes. He talked about the influence of the Chinese community in Sarawak and the historical significance of the White Rajahs, three generations of the British Brooke family who ruled Sarawak for 100 years starting in the mid-19th century. Yap also spoke about the logging industry in Sarawak as well as state's many religious beliefs and its missionary boarding schools.

One evening, our guide demonstrated how to tie a traditional sarong and later, we took turns trying to pop balloons with a blowpipe. 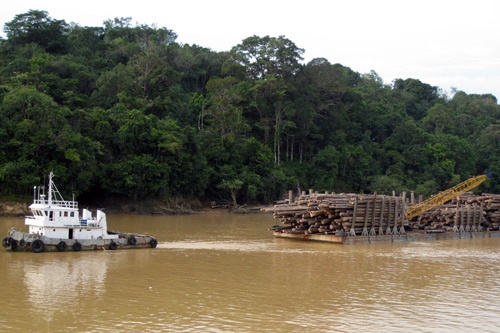 Heidi Sarna
You'll gain insight into Sarawak's logging industry.
As told by our guide, Sarawak is one of the world's largest exporters of tropical hardwoods and the state is apparently still covered in 65% primary forest. We saw the logging industry in action, with barges being loaded with giant logs at riverside timber camps for the trip to saw mills and timber factories down stream. Eventually, the wood would be taken to the port of Bintulu for export overseas. We also saw smaller scale operations by villagers who float logs, tied together with rope, down the river. 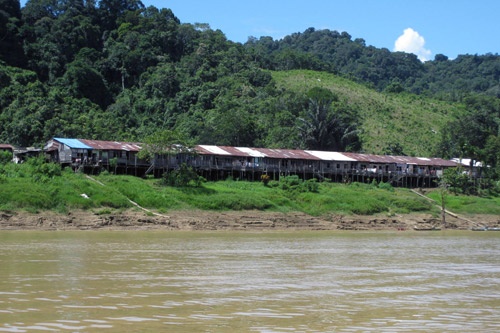 Heidi Sarna
You'll get great views of traditional lodging.
Traditionally, many of Sarawak's many ethnic tribe people have lived communally in "longhouses," a row of attached apartments with a common area that runs the length of the entire complex. Elevated on stilts for protection from flooding and wildlife, we visited a longhouse where 22 families lived. We were greeted by the chief of the house and treated to a traditional Iban folk dance that imitated the movements of Sarawak's beloved hornbill birds.