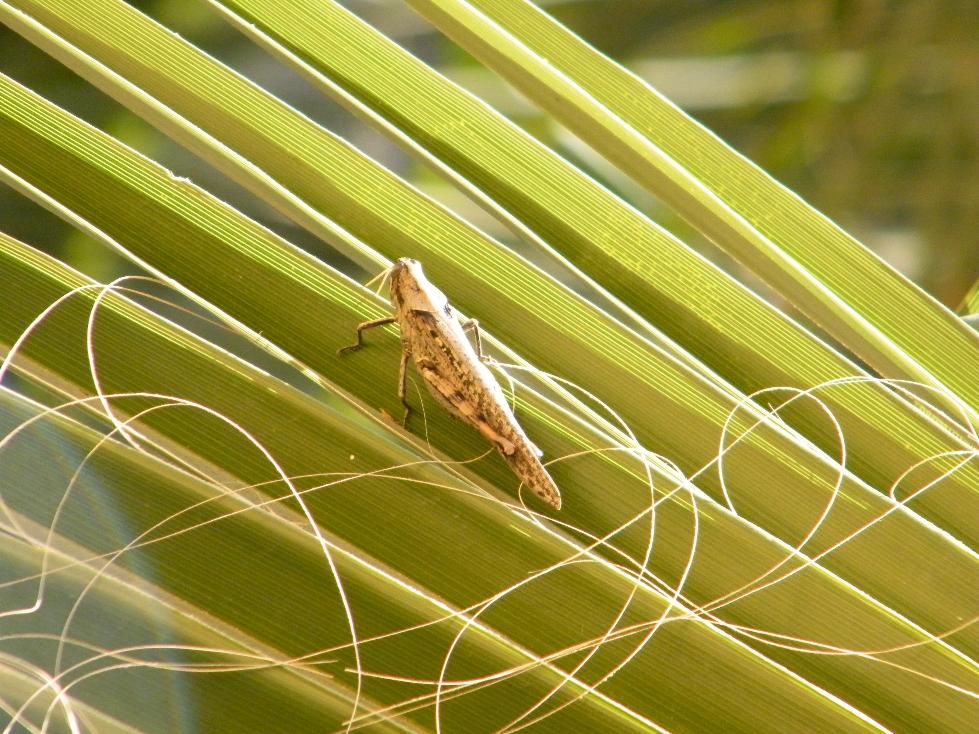 How to Book the Best Cruise Suites at Sea

By
How Suite It Is
By Heidi Sarna

Love the idea of cruising but hate the prospect of staying in a cramped cabin? Book one of these luxurious ship suites for more space, better amenities, and amazing views.

While the standard cabin aboard a cruise ship is about 150 to 190 square feet, a ship suite measures anywhere from about 250 square feet to more than 1,400 square feet. Ship suites have private balconies and amenities such as stocked mini bars, bathrobes, and high-end bath products from the likes of Bulgari and L'Occitane. Many also have bathtubs, walk-in closets, vanity tables, and sitting areas. The biggest suites have one to three bedrooms, a dining area, pantry, and several bathrooms.

"There is a continuing trend for cruise lines to build ships with more luxury accommodations with additional 'suite-only' amenities," says Sherry Laskin, owner of Cruise Connexions (www.cruiseconnexions.com). "Norwegian Cruise Line created the Villa category and is adding even more luxury cabins on their new class of ships, Celebrity has a restaurant only for suite and spa category guests, and Cunard continues its tradition of exclusive restaurants depending upon your suite category."

Check out these reasons for why you should book a suite -- and follow these money-saving tips for booking a suite on your next cruise. 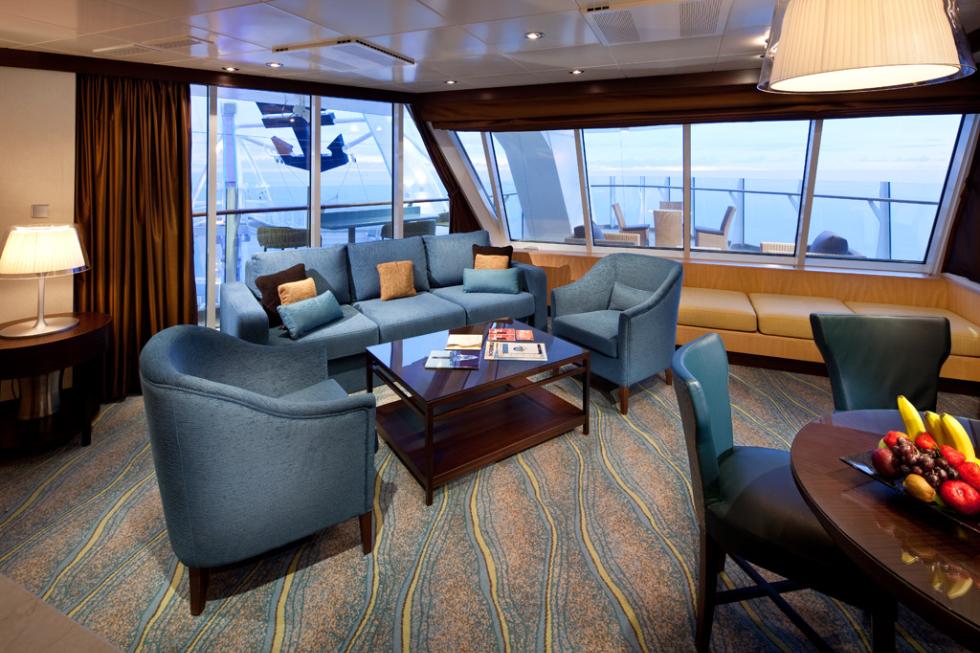 "Book early… period," says Kevin Weisner, vice president of CruiseDeals.com (www.cruisedeals.com). "We just don't see the cruise lines panicking about getting rid of excess suite inventory. Every now and then, a cruise line will call and offer one of our booked customers a nice upgrade to a suite for a hundred dollars or so, but this is rare. It's also an indication that rather than expose a low price to the general public, they'd rather do something quietly for a loyal customer."

Tiffany Neidhardt, vice president of sales and marketing of Cruises N More (www.cruises-n-more.com), points out that unique suites, such as the Aqua Theater Suites aboard Royal Caribbean's Oasis and Allure of the Seas, can sell out a year before sailing. These two-bedroom suites sleep six and have both an interior balcony and exterior balcony -- one with views of the Aqua Theater performances and the other with sea views.

A few high-end lines have suite-only ships, including Silversea, Seabourn, and Regent Seven Seas, with their standard suites measuring about 250 to 300 square feet. The rest of the cruise market is comprised of ships with a variety of cabin categories, from inside cabins without windows to sprawling multi-room penthouse suites.

Photo Caption: An Aqua Theater Suite on the Oasis of the Seas 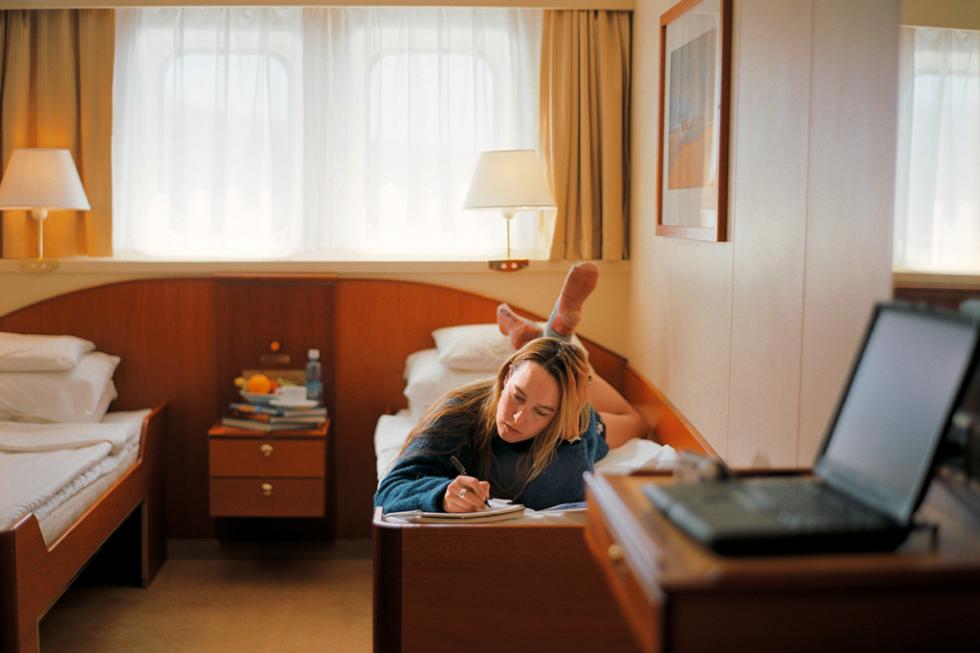 Norwegian Cruise Line
Book a suite during the off-season.
"If you want a taste of luxury, a bit of pampering and possibly a butler, look to the larger ships, cruise off-season, and go for the lowest suite category within your budget," says Sherry Laskin of Cruise Connexions.

CruiseDeals.com's Kevin Weisner says look for deals on Caribbean itineraries in the fall and winter when it's not uncommon to see a suite that's only 30% to 50% higher than the entry-level balcony rate.

Photo Caption: The Haven Owner's Suite on the Norwegian Pearl features both a living room and a dining room. 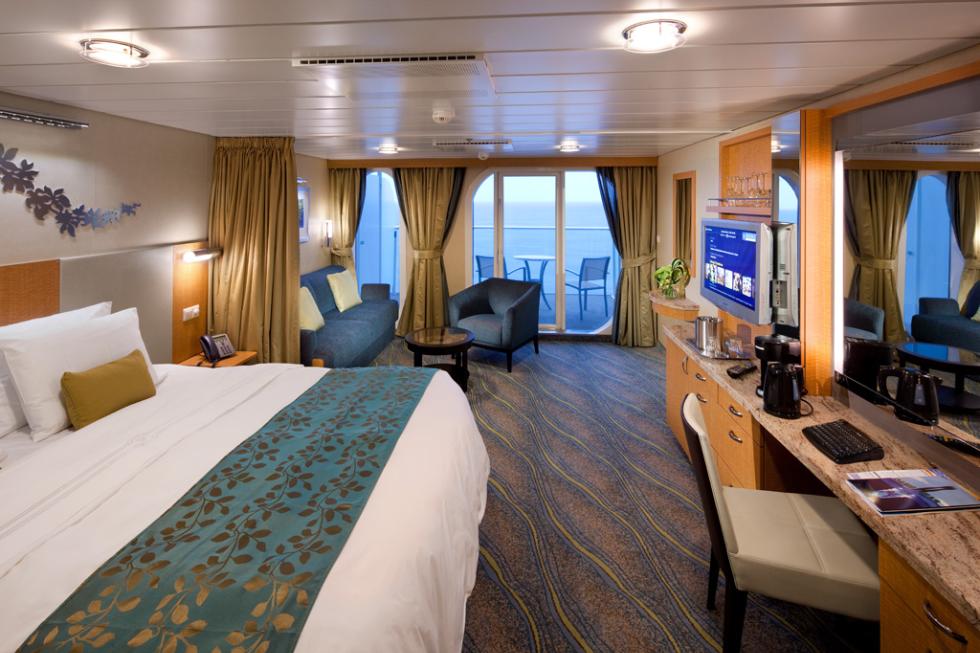 Royal Caribbean International
Go for the junior version of a suite.
Generally, the words mini suite and junior suite are interchangeable. They're smaller in size than a true or full suite. Mini suites or junior suites typically occupy one room, though they may have large bathrooms with tubs and a walk-in closet.

A true suite may also be one big room, but it will be bigger and more luxurious -- usually with amenities like a walk-in closet and a large bathroom with double sinks and a tub. Most mini suites and true suites also have private balconies.

"With the introduction of the mega-liners in the last decade, suite availability has increased disproportionately, but it's also a product of what's considered a suite," says Kevin Weisner of CruiseDeals.com. "It's fair to say that the top-end suites are still small in number, but there has been a big increase in the junior or 'mini' suite. While the relative price differences between junior suites and balcony cabins are not dramatic, the 'true' suites still command a significant premium … There are more mini-suites and junior suites than ever before."

Photo Caption: A Junior Suite on the Oasis of the Seas 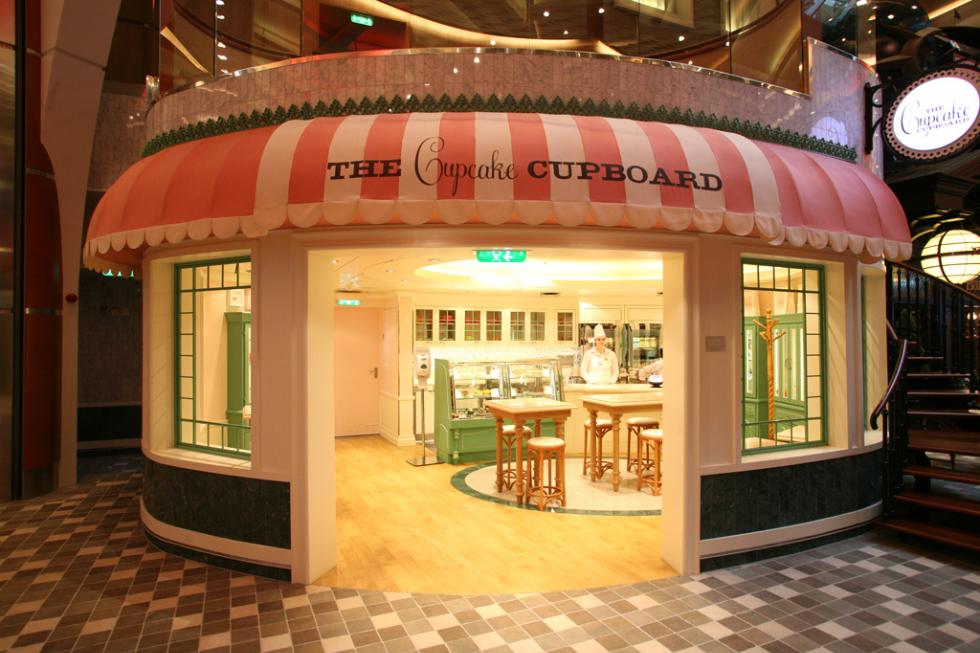 Royal Caribbean has a number of cruises where the suite price is very close to the balcony price and in some cases only 50% more than an interior," says Weisner.

He adds that Holland America has a South America offer for January where the suite price is just 20% higher than the highest priced ocean-view cabin.

Photo Caption: The Royal Suite on the Splendor of the Seas 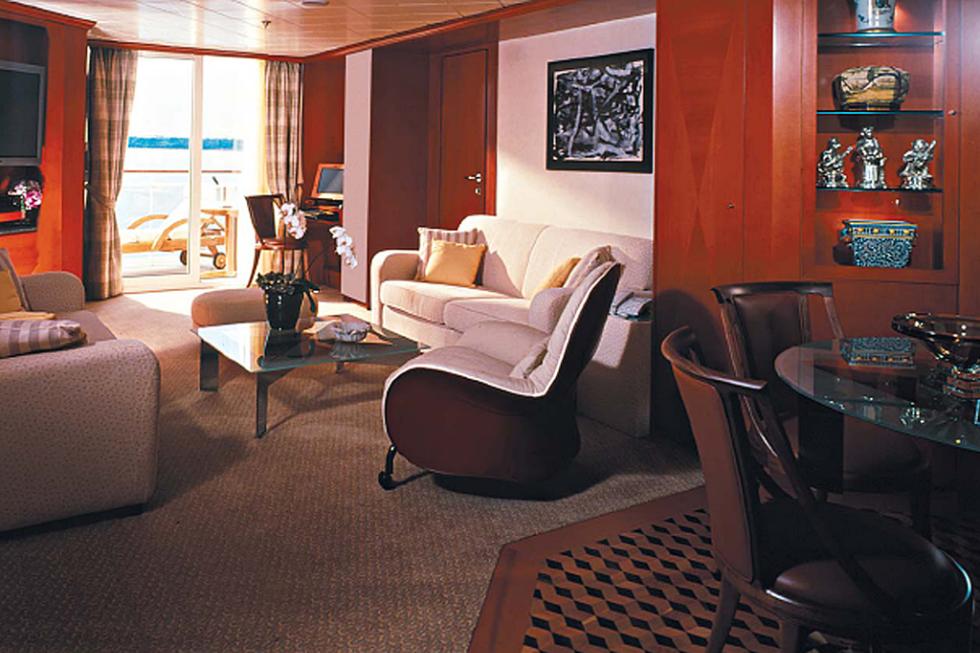 Disney Cruise Line
Do your research before booking a suite for five people.
"There is very little inventory for suites that can accommodate five or more passengers and they mostly appear in the 'upper suite' categories," says CruiseDeals.com's Kevin Weisner.

Exceptions to this rule include junior suites aboard Allure and Oasis of the Seas that can accommodate five guests. Cabins for five can be found on Disney's ships as well.

But for families, it's usually cheaper to book two standard cabins instead of a suite.

For example, a family of five can share two ocean-view staterooms aboard Disney Cruise Line for a total of $6,375, while a suite on that same 7-night Caribbean voyage departing Sept. 15, 2012, would cost more than $11,000 for five people, Weisner says.

Photo Caption: The Balcony Stateroom on the Disney Wonder 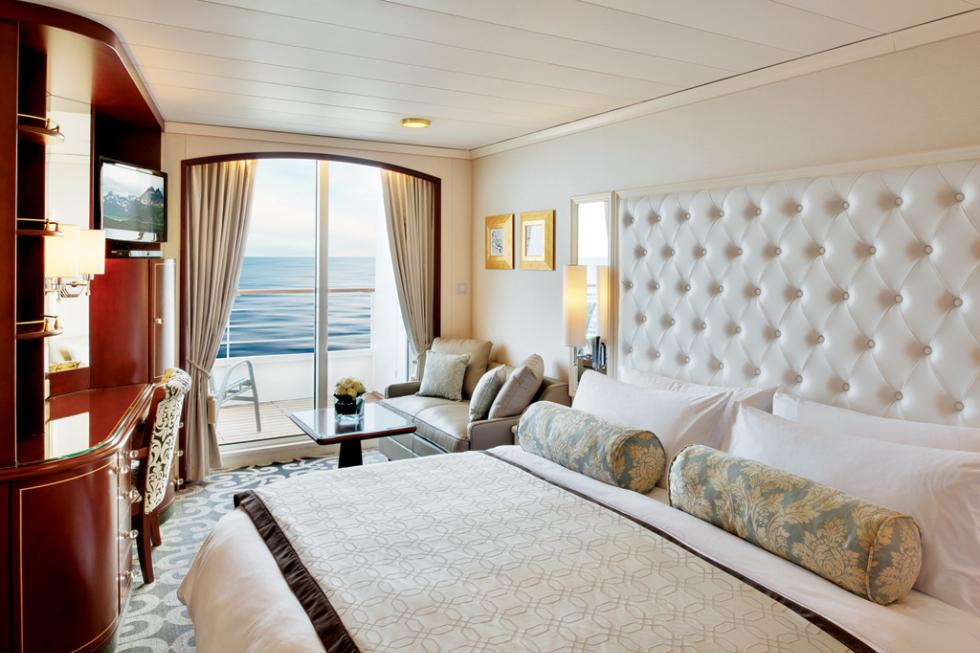 Crystal Cruises
Book connecting cabins.
For a suite feel without the price, consider booking two standard connecting cabins with an interior door between them. This setup is ideal for families with children, as you'll have two bathrooms, two televisions, and a door that can be kept open or closed (though you'll miss out on all of the suite extras).

The new 3,690-passenger Carnival Breeze has 400 pairs of interconnecting cabins and the line has been adding more connecting cabins to older ships during dry docks. For example, an 8-night eastern Caribbean cruise departing Dec. 8, 2012 starts at $779 per person for a pair of ocean-view connecting cabins.

Sherry Laskin of Cruise Connexions says it's often much less expensive to book two connecting rooms than it is to travel in a suite: "For example, Holland America's Westerdam is sailing a 7-night Alaska cruise on May 12, 2012. A family of four can book the Penthouse Veranda, which gives them 1,150 square feet of living space including an expansive balcony with a whirlpool, one and one-half bathrooms, a king bed and a sofa sleeper for two at a total cost of $8,498 plus tax for the four of them. Or the family could reserve two balcony cabins with a connecting door and each person can sleep in their own bed, have two full bathrooms, and a double balcony with the divider removed for a total of $5,596 plus tax for four."

Laskin adds that there's a difference of about 500 square feet between the two types of accommodations; however, a large portion of the Penthouse Suite's living space is the enormous balcony.

Photo Caption: The Deluxe Stateroom with Verandah on the Crystal Serenity 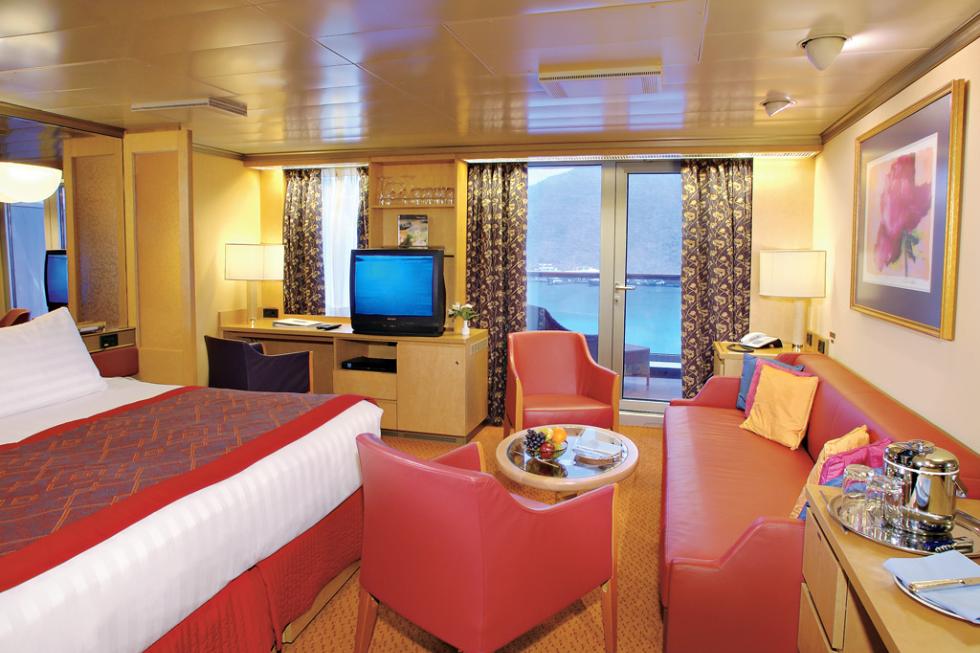 Holland America Line
Get a deal for a family of four.
Some suite categories have attractive third- and fourth-person rates. Tiffany Neidhardt of Cruises N More reports that a May 27, 2012, Alaska cruise aboard the 1,916-passenger Oosterdam round-trip from Seattle in a category SA or SB suite that measures 500 to 712 square feet (including the balcony) is going for $2,649 per person for passengers one and two, and just $199 per person for passengers three and four (must book by Nov. 23, 2011). The suite has floor-to-ceiling windows, a large sitting area, and a sleeper sofa.

Photo Caption: A Verandah Suite on the Oosterdam cruise ship 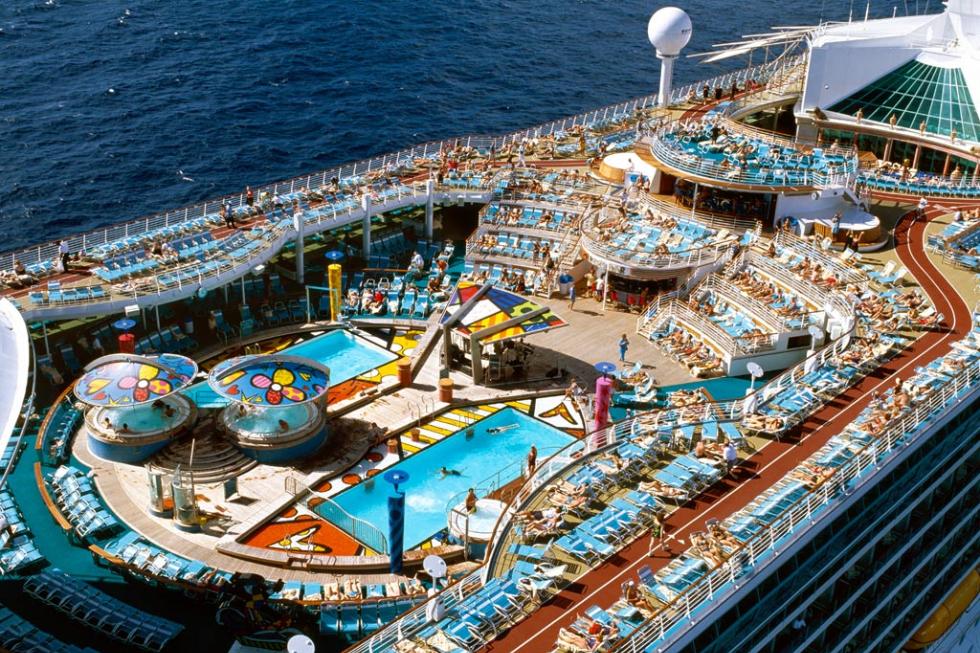 Silversea Cruises
Compare big-ship suites and luxury-ship suites before booking.
Depending on the season, when you add in all of the extras (specialty dining charges, alcoholic drinks, and tips), a suite on a mass-market ship can often be just as expensive as a suite with a luxury line.

For example, Charlie Funk, co-owner of Just Cruisin' Plus (www.justcruisinplus), says he booked a couple in a Junior Suite for $6,100 (per couple) on Royal Caribbean's 5,400-passenger Oasis of the Seas for a weeklong cruise with their extended family. That same couple took a 7-night cruise a few weeks prior that also cost them $7,400, only this sailing was with upscale Seabourn Cruise Line, whose all-suite ships include all alcoholic beverages, alternative dining, and tips in the fares.

"If you don't want to be nickel-and-dimed, the off-season all-inclusive cruises are probably worth their fare," adds Cruise Connexion's Sherry Laskin. "You pay once, and you're finished."

Photo Caption: The Royal Suite on the Silver Cloud ship 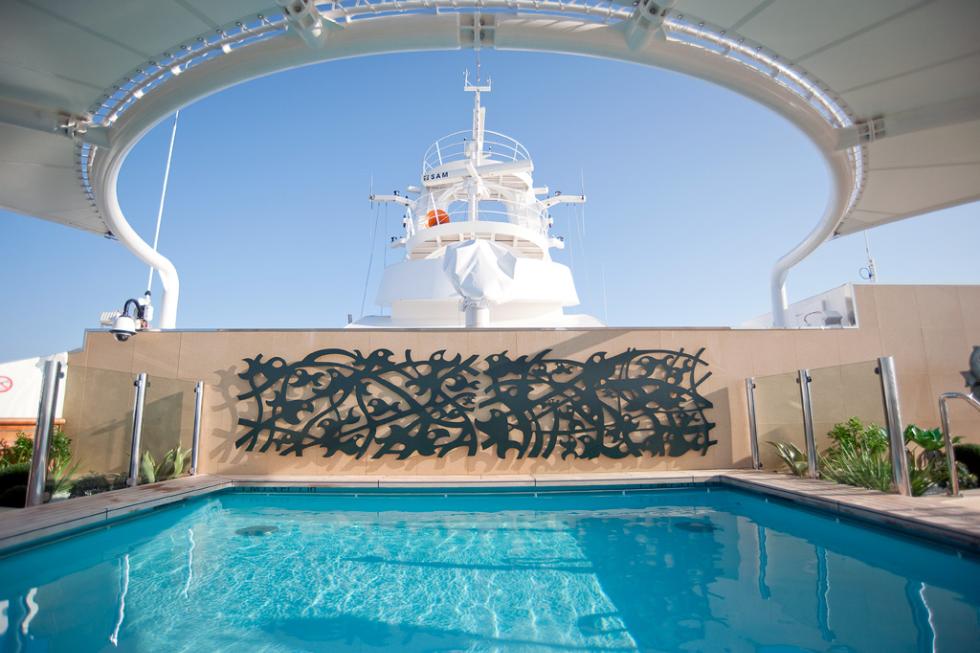 MSC Cruises
Enjoy an exclusive suite community.
"A great innovation has been the 'ship within a ship' concept that you find on vessels like NCL's Epic and on MSC's newest ships, providing a private suite experience within the confines of a larger ship," says Anthony Hamawy, president of Cruise.com (www.cruise.com).

The Yacht Club Class suites aboard MSC Cruises new 3,274-passenger Splendida and Fantasia entitle those guests to exclusive use of private sections of deck, including a pool and bar, lounge, and private dining room.

"Having experienced the Yacht Club Class on the Splendida last year, it was like having your own private yacht for a week. I never ventured 'outside' of the Yacht Club areas, except to see the evening shows and listen to the incredible live music at various venues," says Sherry Laskin of Cruise Connexions.

Photo Caption: Part of the MSC Yacht Club, one of the private pools on the MSC Splendida 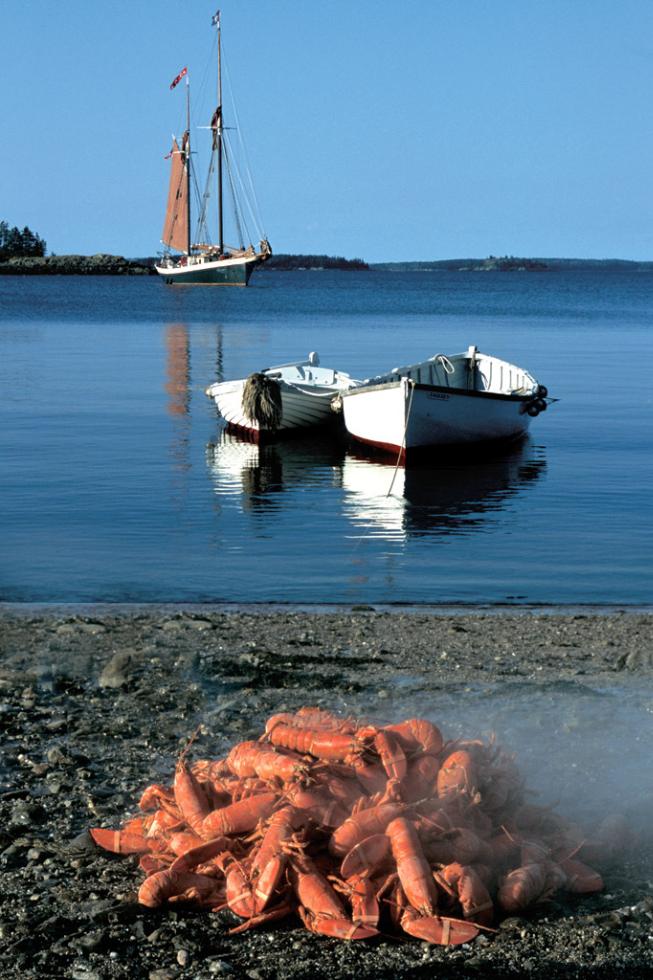 Fares for Norwegian Sun suites start at $1,749 per person including port charges for a 7-night Caribbean cruise on Jan. 14, 2012.

"Suite guests on Norwegian Cruise Line also can take their place at the front of the line for the famous Chocolate Gala event," says Sherry Laskin of Cruise Connexions. "Butler and concierge service is also included for guests who choose one of only 20 Penthouse and Owner's Suites."