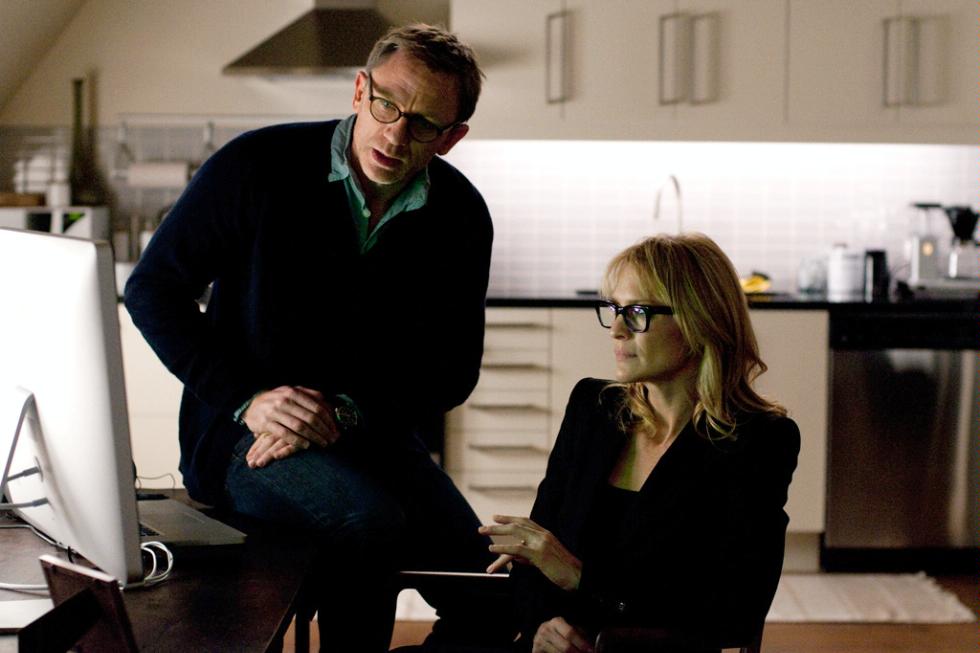 By Mary Anne Evans
The Girl Who Visited All the Famous Sights
Want to see where the characters of Mikael Blomkvist and Lisbeth Salander, created by author Stieg Larsson, played out the

Photo Caption: Daniel Craig and Robin Wright in a scene from "The Girl with the Dragon Tattoo." 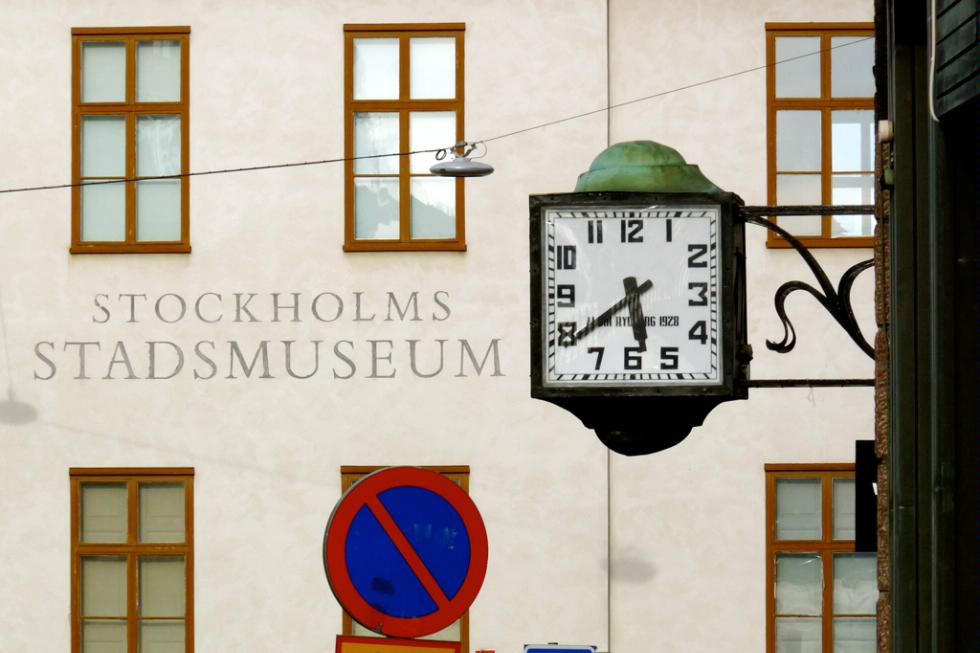 arjanrichter
Stockholms Stadsmuseum
What better place to start than with the film set of the Millennium editorial office? It should get you in the mood. Buy the official map of the Millennium tour here (40 SEK). 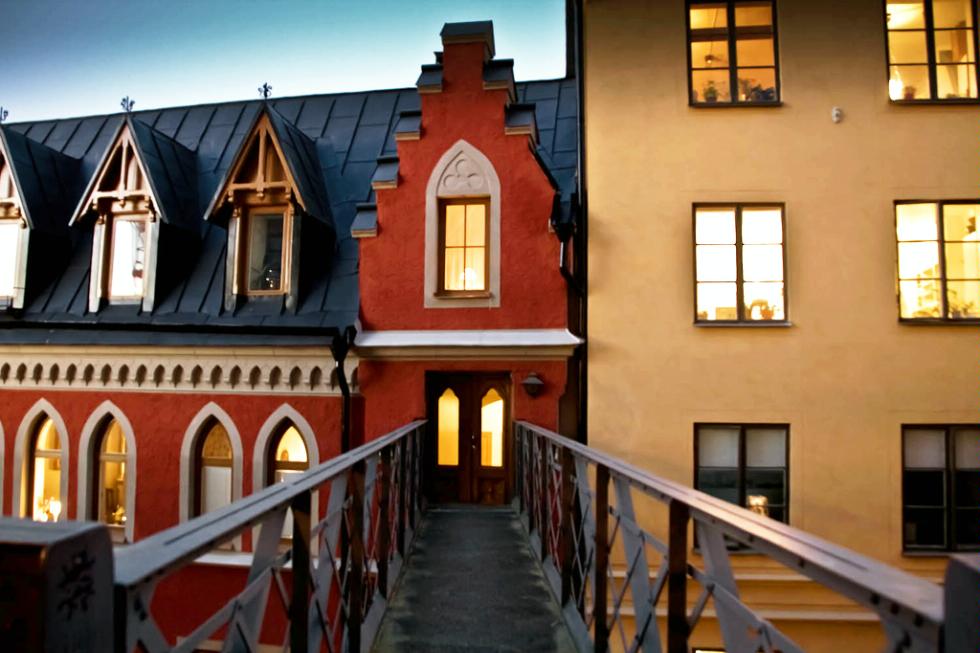 charlott_l
Bellsmansgatan 1
Now one of Stockholm's most famous addresses, this is where Blomkvist lived in an attic apartment. It's a Gothic fantasy of a building with a private bridge and wonderful views. The real entrance is at street level, but the entrance at the walkway depicted in the film is much more picturesque. Public transport: T-bana: Slussen. Bus: 43, 55.

Photo Caption: One of Stockholm's most famous addresses, Bellsmansgatan 1 is where the fictional character Mikael Blomkvist lived in "The Girl with the Dragon Tattoo." Stockholm, Sweden. 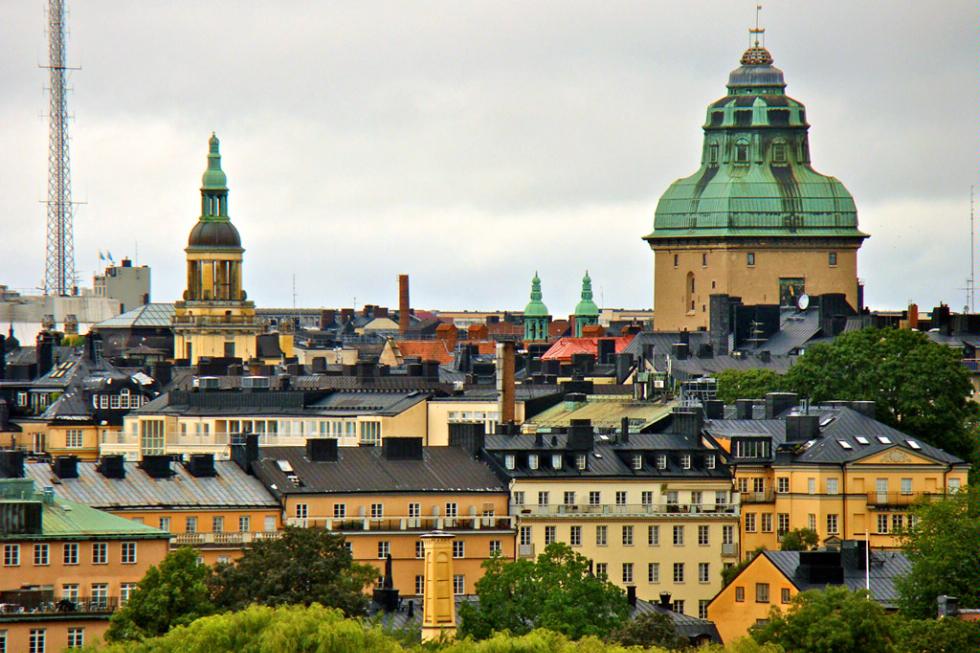 kirstykomuso
Monteliusvägen
Take in the view, but also look over to Kungsholmen island and the Rådhuset with its light brown tower and green roof. This is the courthouse where Blomkvist is convicted of slander against Hans-Erik Wennerström and it all kicks off.

Photo Caption: Marked by a green roof, Stockholm's Rådhuset courthouse is featured in "The Girl with the Dragon Tattoo." Stockholm, Sweden. 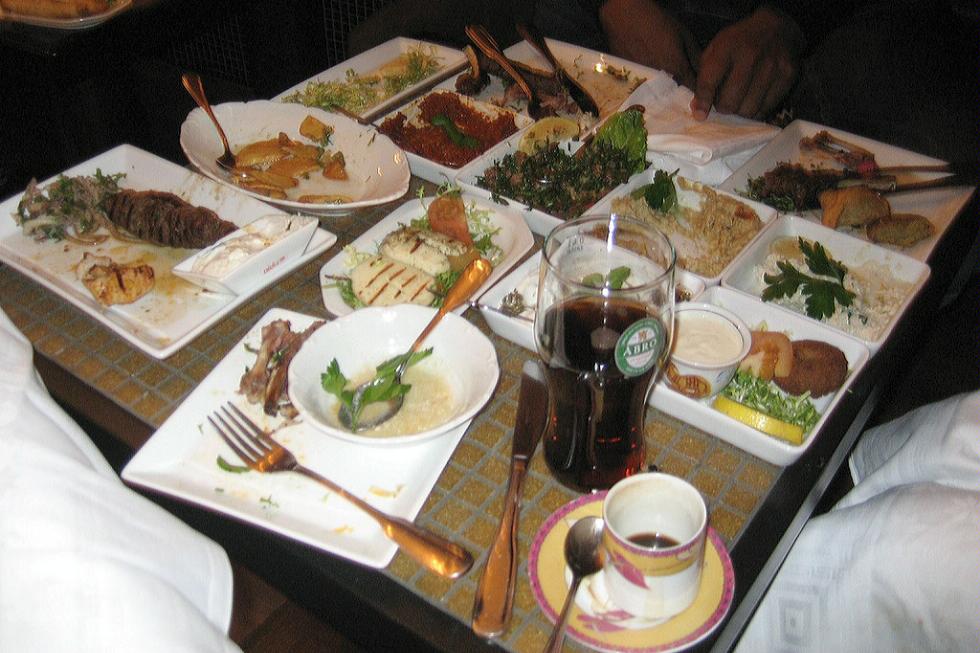 perplemaggie
Tabbouli
It's better known to Larsson aficionados as Samir's Cauldron, the Bosnian restaurant where the famous shoot-out takes place. It's shut during the day, but you might want to come back here for a thoroughly satisfying meze in the garden in the evening, without the guns. Details: Tavastagatan 22. tel. 08-429 82 55; www.tabbouli.eu.

Photo Caption: A meal at Tabbouli. The restaurant goes under the name Samir's Cauldron in the book, "The Girl with the Dragon Tattoo." Stockholm, Sweden. 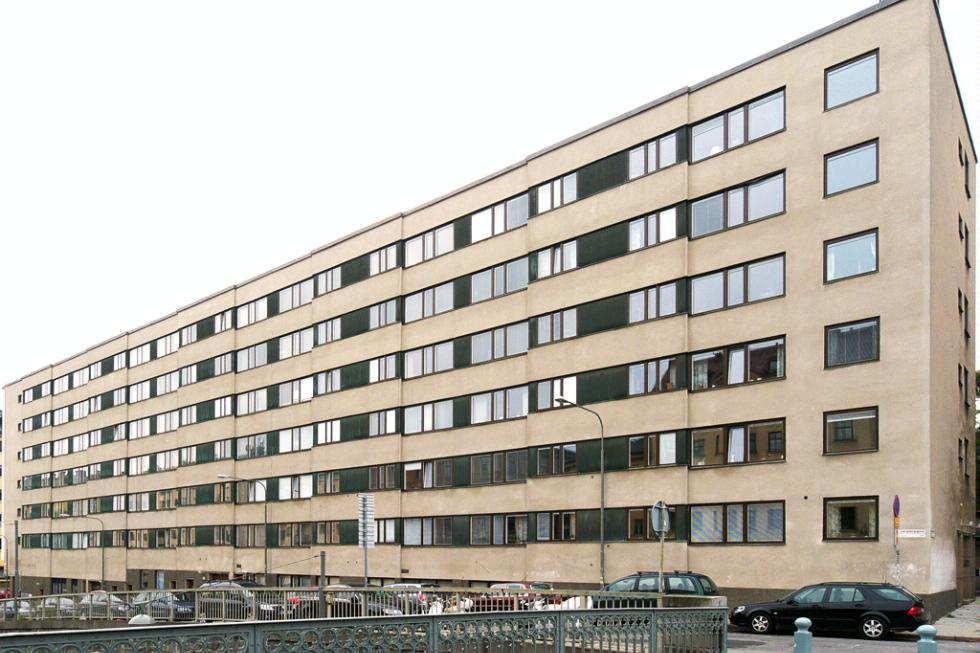 alinnman
Lundabron
It's not particularly attractive, nor is it meant to be. The Lunda bridge is between Blomkvist's apartment and Salander's, which was in an old building with no comforts. Most of these tenements were swept away in the 1970s when new apartments were built for the inhabitants, with running water and inside toilets. The bridge spans one of the places deliberately blown apart by dynamite in the 1880s (Nobel's great invention).

Photo Caption: One of the old apartment buildings near the Lundabron or Lunda bridge in Stockholm, Sweden. 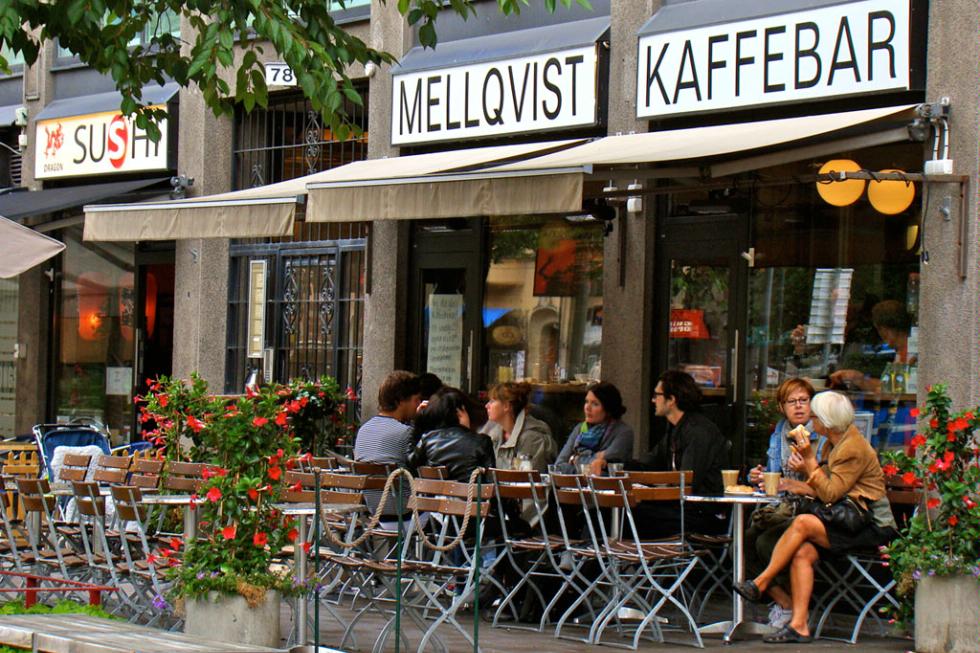 kirstykomuso
Mellqvist Coffee Bar
One of the most important places in the books where Blomkvist takes his various women. Larsson himself used it extensively when working at Expo's editorial offices in the same building and could be seen tapping away at his laptop. Despite the fame, it's friendly, laidback, and local with an outside terrace for winter and summer. Details: Hornsgatan 78. Small latte 30 SEK.

Photo Caption: The Mellqvist Kaffebar in Stockholm, Sweden was made famous by "The Girl with the Dragon Tattoo." 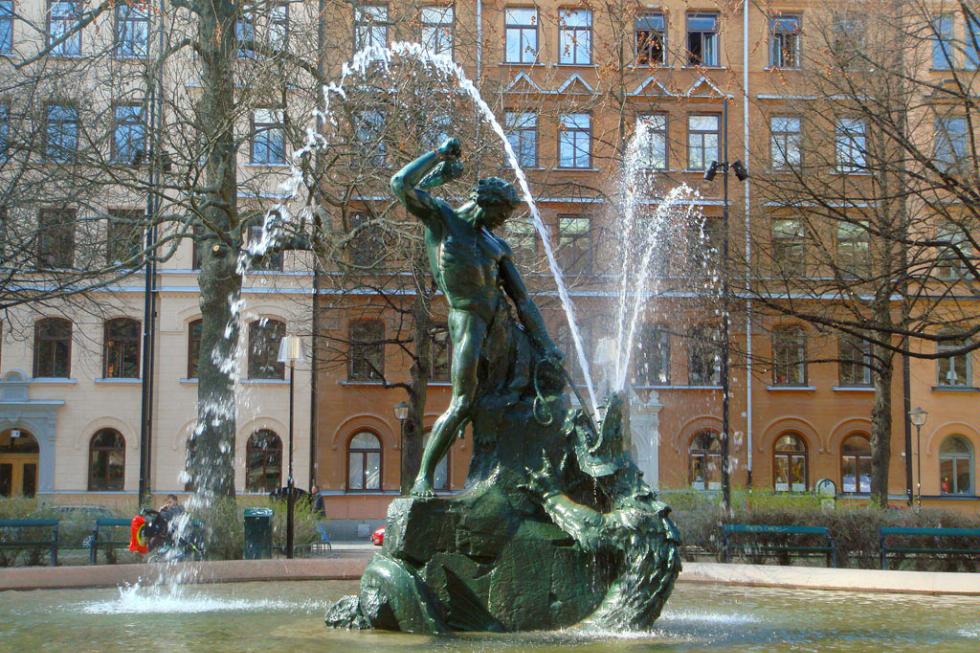 granding
Synagogue
Walk through Mariatorget, also used in the Swedish film, along St. Paulsgaten to the discreet building that is the Adat Jisrael Synagogue, one of Stockholm's oldest Orthodox synagogues set in an 18th-century building. Jewish Inspector Bublanski is a regular worshipper and meets with Dragan Armansky, CEO of Milton Security, here. St. Paulsgatan 13 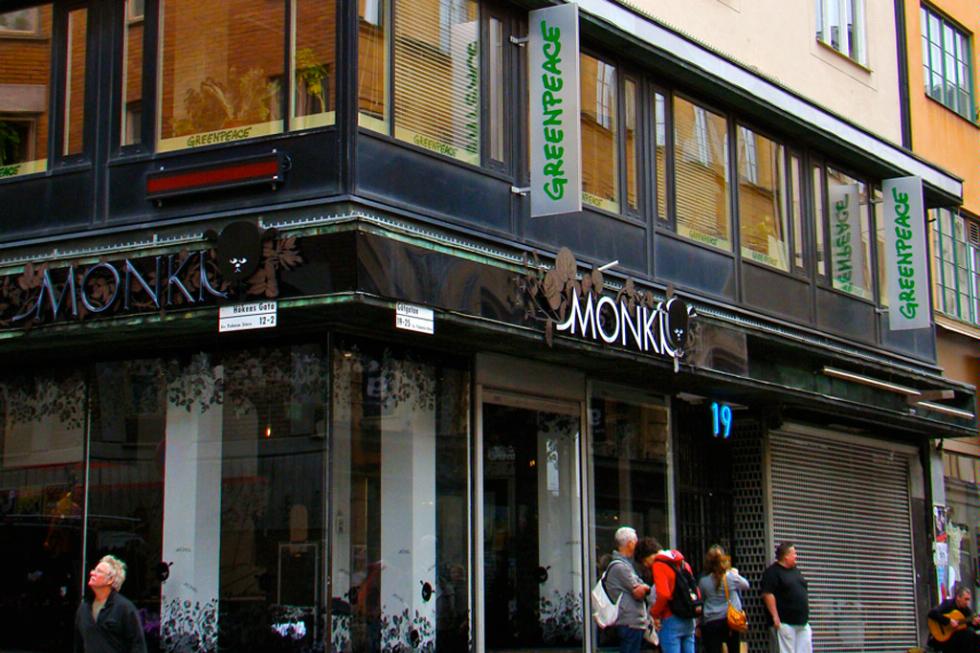 kirstykomuso
Millennium's Editorial Offices
This must be one of Stockholm's most photographed buildings. It's where Millennium has its editorial office, located above what was once Greenpeace's. Corner of Götgatan and Hökens Gata.

Photo Caption: The Greenpeace offices in Stockholm, Sweden are in the same location as the Millennium offices in the Stieg Larsson book, "The Girl with the Dragon Tattoo." 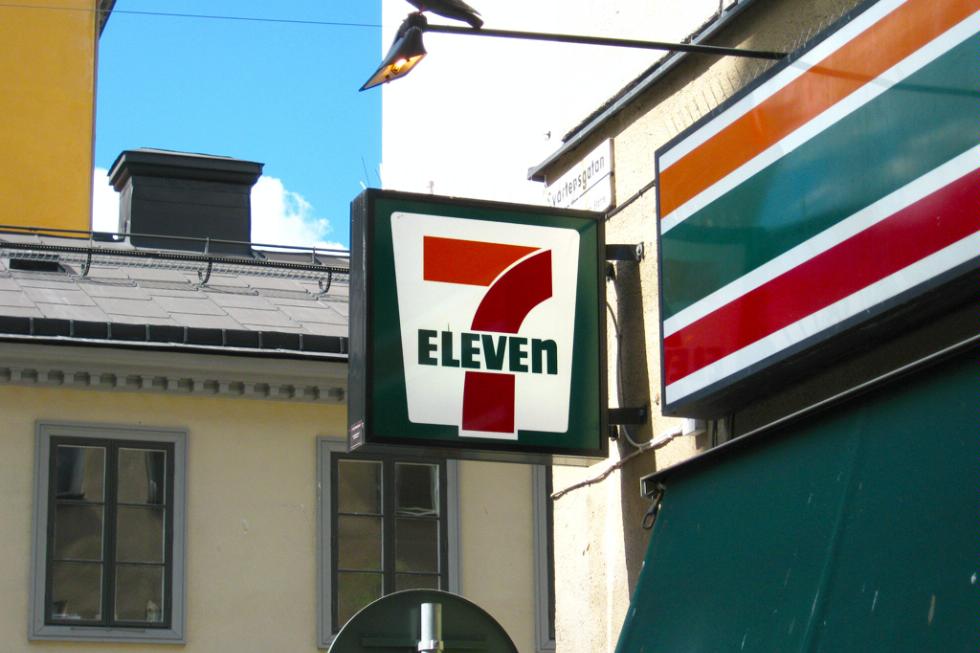 robertopastene
7-Eleven
Go in and buy a package of Billy's Pan Pizza and you must be the ... well, 1,000th, 5,000th? visitor to do this. It has to be keeping Billy in business. This is where Salander shops after buying her fantastic new apartment. 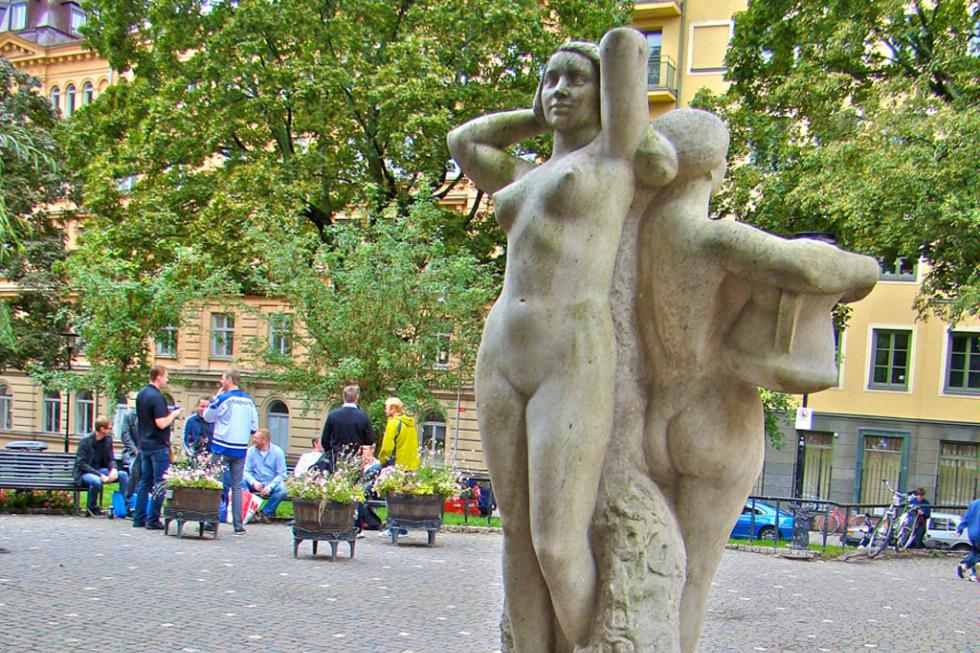 kirstykomuso
Mosebacke
The square was already pretty famous due to the Mosebacke theater, but it took Salander to bring the Nils Sjögren statue of The Sisters to general notice. It was inspired by the suicide of two girls in Hammarby Lake in the early 1900s. The official story is that they were in love with the same man; the more likely one was that they were in love with each other -- of course, thoroughly impossible at the time.

Photo Caption: The Nils Sjögren's statue "The Sisters" near the Mosebacke Tor in Stockholm, Sweden. 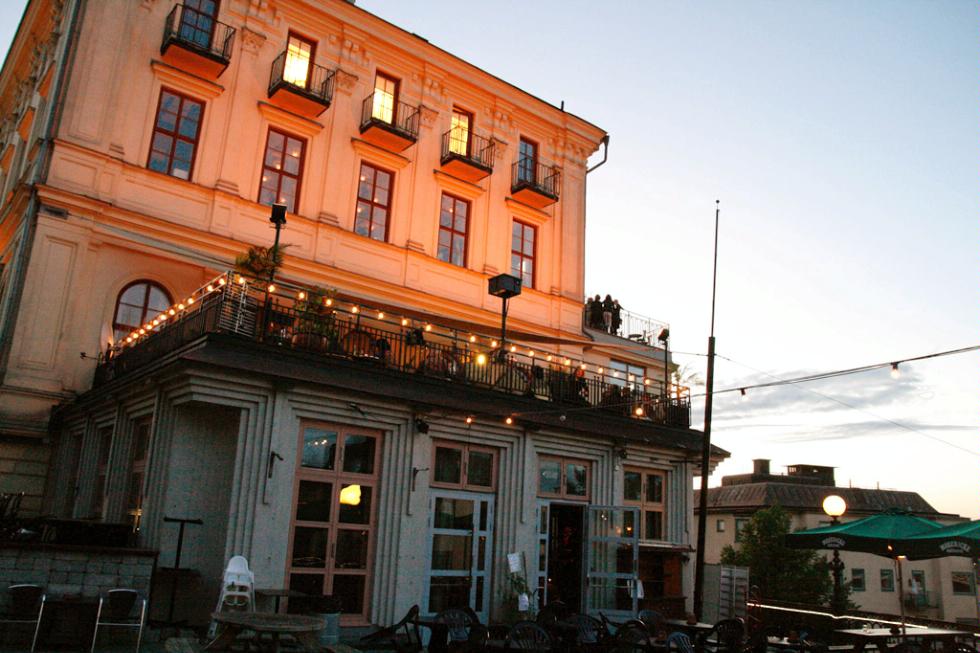 fakeplasticgirl
Södra Teatern
This is a wonderful bar and the place where Salander and her lawyer, Blomkvist's sister Giannini, have a beer at the end when all the drama is over. But was it? As Larsson intended many more books, it could have been the beginning of something ... Have another beer and speculate. Details: Mosebacke torg 1 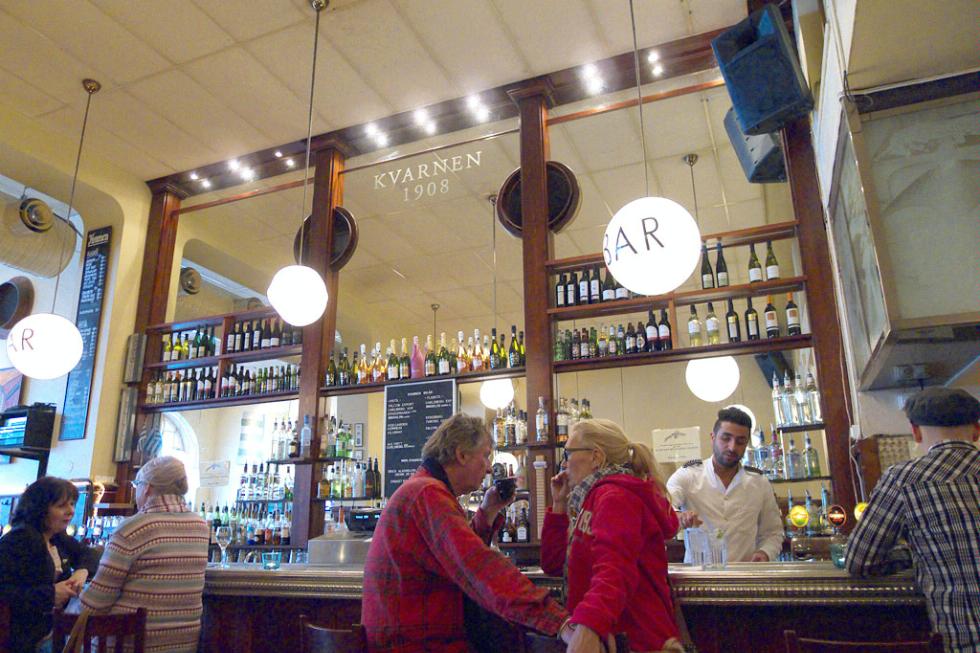 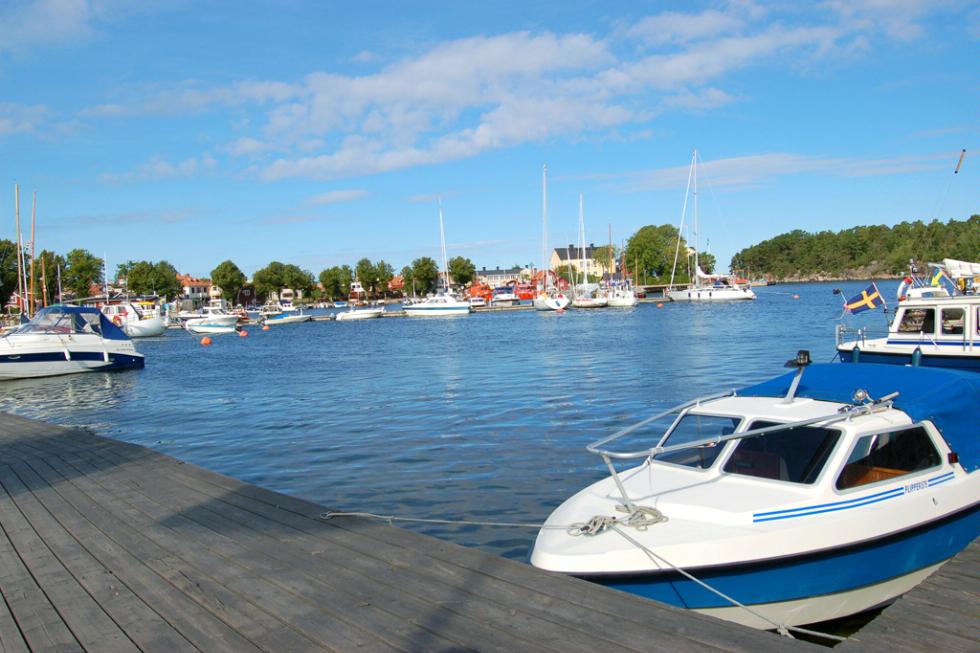 robertnyman
Sandhamn
Hard-core fans can take the boat out into the archipelago to Sandhamn, where Blomkvist goes to escape the city. But his summer cottage is not marked, so go for the atmosphere and a good day out. Cinderella boats leave from Strandvägen from mid-Apr to mid-June; www.cindarellabatarna.com. For information on Sandhamn: www.sandhamn.com.