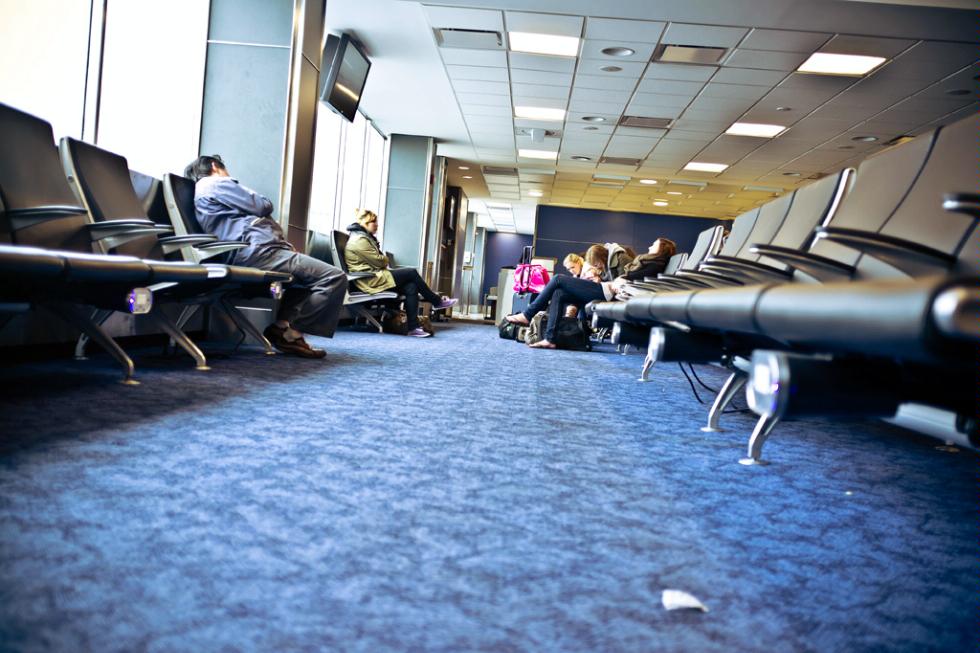 By
Terminal Illness
By Sascha Segan

Most airports are awful. Some are lovely, but most are at best joyless econoboxes, at worst purgatorial warehouses of stalled lives.

Some airports deserve special condemnation, though. In some cases, they deserve to be literally condemned. Assembling this list of misfits I scanned professional surveys and delay statistics and asked my frequent-traveler friends to come up with the ten airports where you'd least like to spend an extra hour.

Maybe you'll find your own least-favorite airport left off this list. What about Atlanta's immigration delays, Washington Dulles's absurd midfield terminal, or Heathrow Terminal 5's baggage indigestion problems? There are too many frustrating airports in the world to include here -- these are just my bottom picks.

Also, I'm sticking to major airports here. There are small airports around the world that consist of a shanty that swelters in the summer and freezes in the winter, with a hole in the wall for baggage claim and a single sad concession stand. (I'm actually describing my experience at Udaipur Airport in India in 1999). But that's not fair. These airports should deliver better service, and they don't. I'm listing them from least worst to the absolute worst. 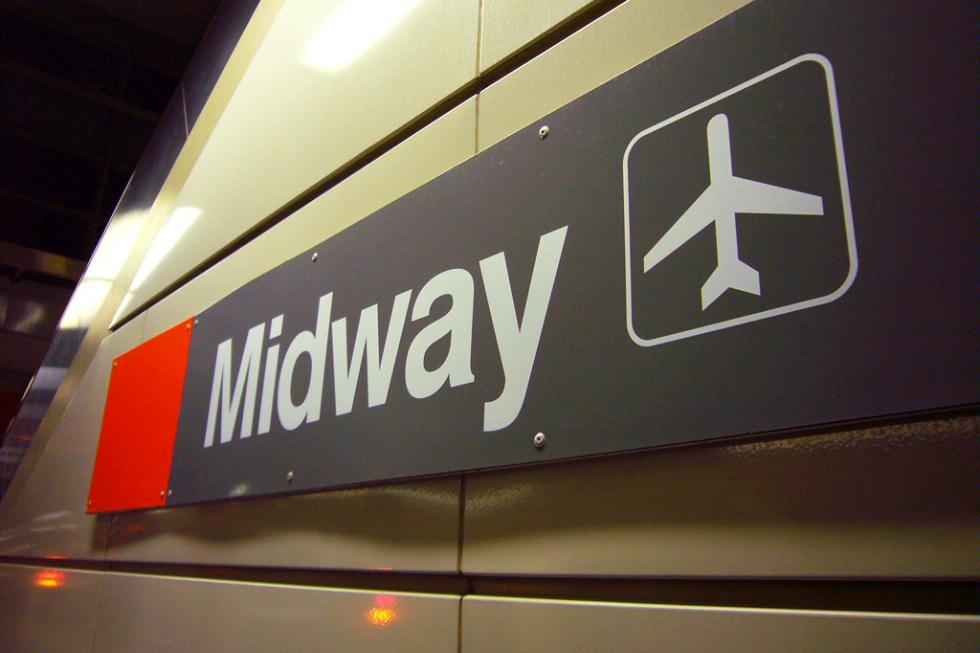 fboyd
Chicago Midway Airport
Chicago's Midway airport often ranks as the nation's worst for on-time departures in the federal Bureau of Transportation Statistics data, earning it a spot on this list. It isn't a bad place to hang out, with a new food court and a frequent subway connection to downtown Chicago (an improvement from the past few decades), but any airport is the worst airport if you're stuck there and you aren't getting on a plane.

Consider this the least-worst of our set of bad airports. Midway's curse may come more from Chicago's notoriously difficult weather than from any problem the airport itself can fix. 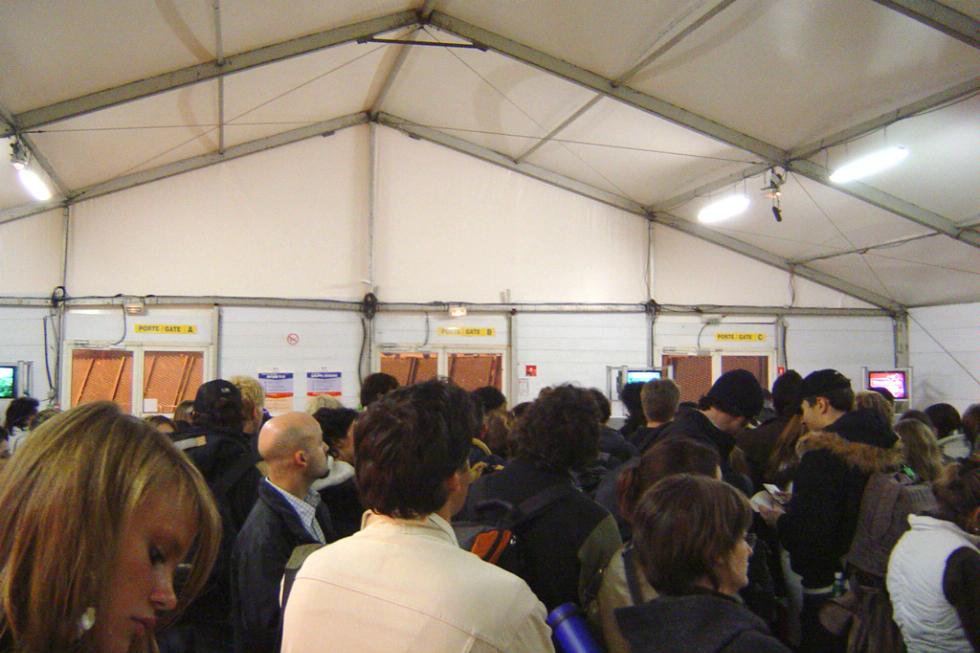 scalleja
"Paris" Beauvais Airport, France
A solid fifty miles north of Paris, this depressing low-cost box of an airport in Picardy got saddled with a bait-and-switch name by Ryanair, the ultimate bait-and-switch airline. It rated as one of the world's worst airports by Frommers.com friends SleepingInAirports.net because of its lack of seating, lack of services, and general half-tent, half-warehouse atmosphere.

It lacks a rail link to Paris and closes overnight, so hope that your flight doesn't get too delayed, or you may be camping out on the lawn.

For years, Ryanair liked to play this trick of stamping the names of famous cities on distant small-town airports with poor transit links that weren't designed for much tourist traffic: thus Beauvais and "Barcelona Reus," which is more than an hour and a half from Barcelona. Ick. 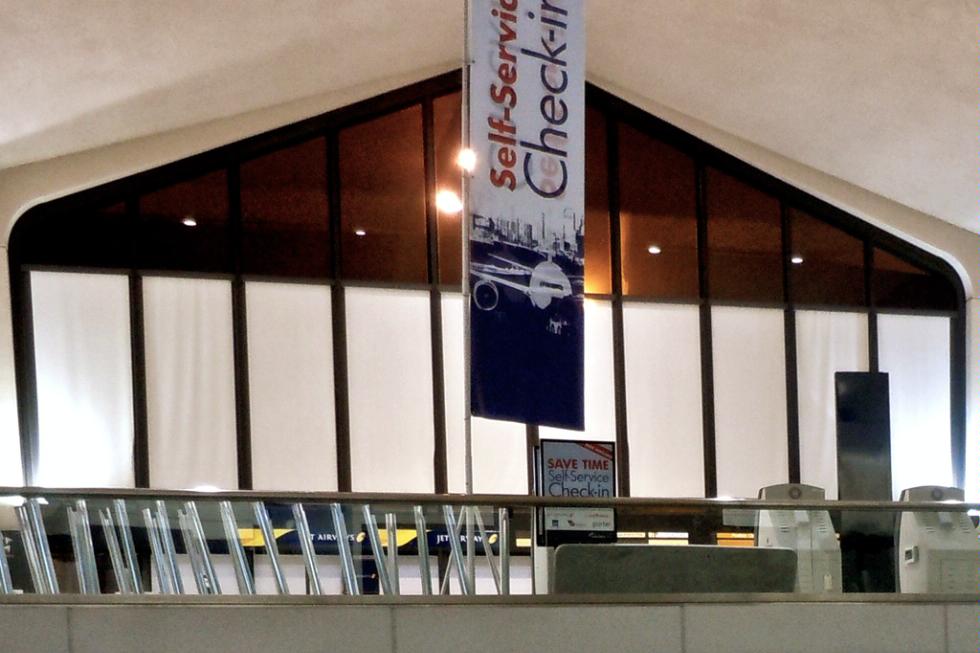 livatlantis
Newark Airport Terminal B
All three major New York City airports are on this list, in large part because they're run by the Port Authority of New York and New Jersey, a hideously mismanaged money sink (in 2014, Rachel Maddow reported the average salary at the Port Authority was $140,000) that does a poor job of responding to air travelers' needs.

Newark routinely gets poor ratings in JD Power's airport studies. It's also the nation's worst airport for on-time arrivals according to the Bureau of Transportation Statistics data—a dubious title it has clung to for far too many years.

Fortunately you'll be stuck waiting at your point of origin, because Newark is an awfully dull airport to wait for a flight in. Its outdated design idiotically puts security before individual piers in Terminals A and B, which means that rather than have a whole terminal's food and shopping to entertain you once you clear security, you're stuck out on a single pier. It's pretty quiet out there. 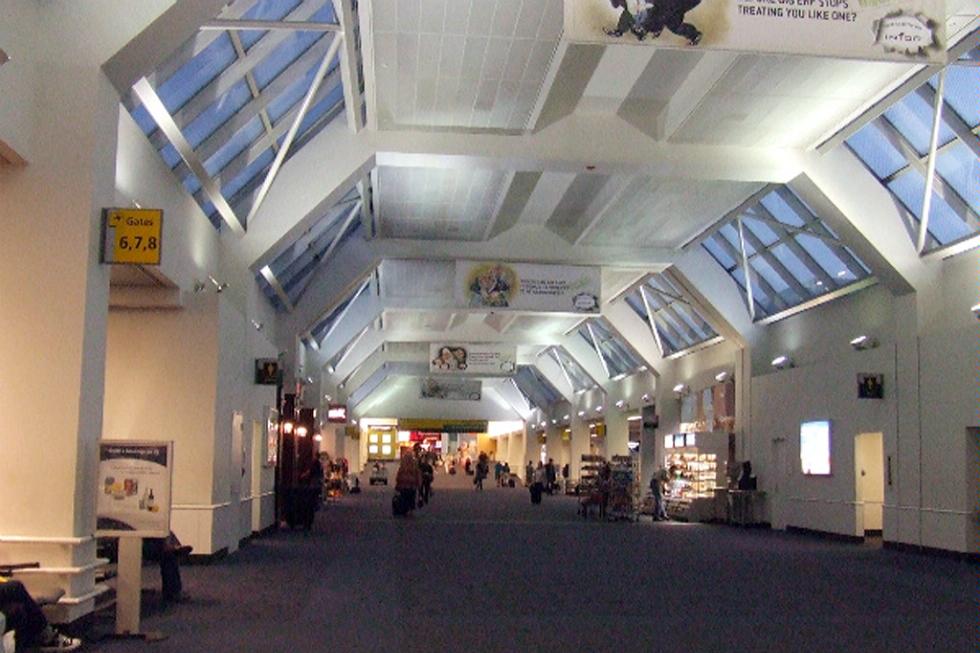 andrea_r
LaGuardia Airport US Airways Terminal, New York City
I don't hate LaGuardia, but it was recently rated the worst major airport in America by both JD Power and Associates and Zagat Survey, so who am I to argue?

LaGuardia has no rail link to anywhere -- even between its own terminals -- and regularly suffers from congestion, overcrowding, and delays. While its terminals are shaping up, they're still each smaller and with fewer services than you'd expect from an airport at one of the top tourist destinations in the world.

I think that's where LaGuardia really falls short. Transplant the airport to a mid-sized city like Kansas City (with its associated traffic) and it wouldn't do so poorly. But faced with the traffic, demand, and tourist expectations of New York City, LaGuardia just doesn't measure up.

I'm giving the US Airways Terminal the worst-terminal award here because at least the central terminal has an atrium and the Delta terminal just got some new food options. The US Airways terminal is dull and sad. 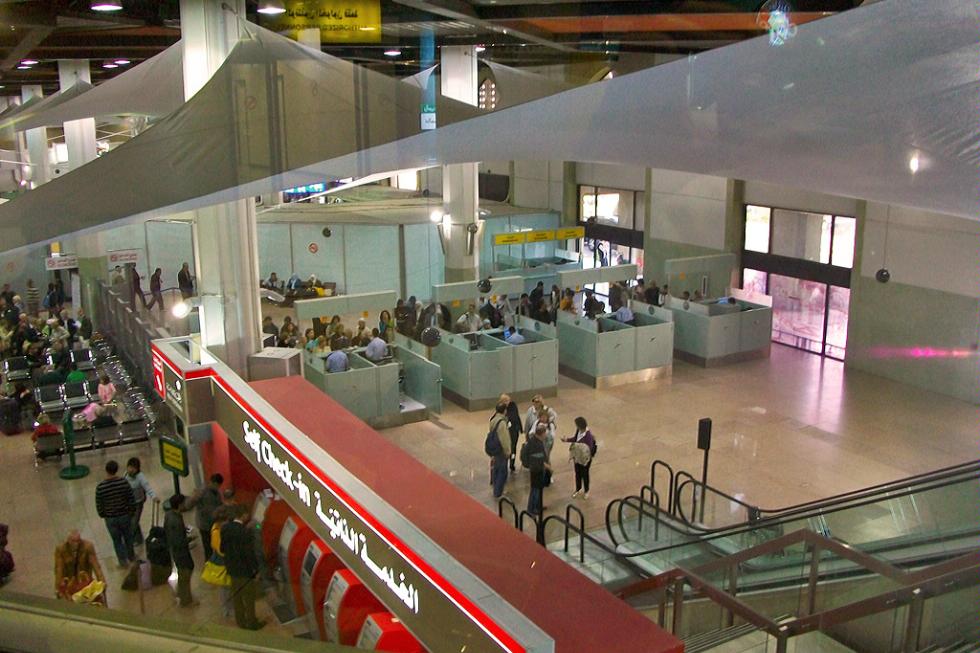 pshegubj
Amman Queen Alia Airport
One of the two airports rated "two stars" by global consulting firm Skytrax, Amman gets lousy ratings for services that might be useful if you're hanging around -- bathroom cleanliness, places to rest, childrens' play facilities, and service counters.

Reviews on the Skytrax website make it clear that you may just want to "hold it" in this airport: they're almost universally appalled at the state of the bathrooms. Those reviewers have probably never been to JFK Terminal 3, but still, that isn't good. 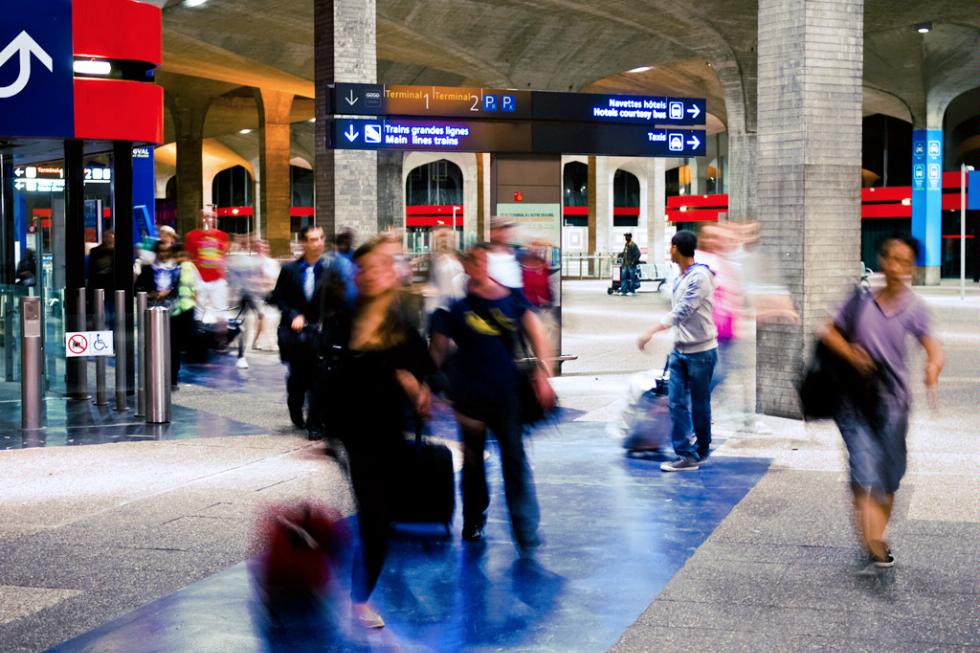 jp_math54
Paris -- Charles de Gaulle Airport, Terminal 3
CDG got the "worst airport" award two years running from SleepingInAirports.net, but this year site owner Donna McSherry decided to give it a break, in part because now "the homeless population was being segregated" to "the Third World inspired Terminal 3." Big takeaway here: If you're worrying about how to distribute your homeless population, you're one of the worst major airports.

De Gaulle is a huge airport where many people have to transfer, but it's an awful airport to change planes in; many flights require a change between CDG's various scattered terminal buildings, which are connected primarily by slow, confusing shuttle buses. Changing planes here is tiring, irritating, and sometimes a little terrifying.

This being Paris, there is also usually a strike on. 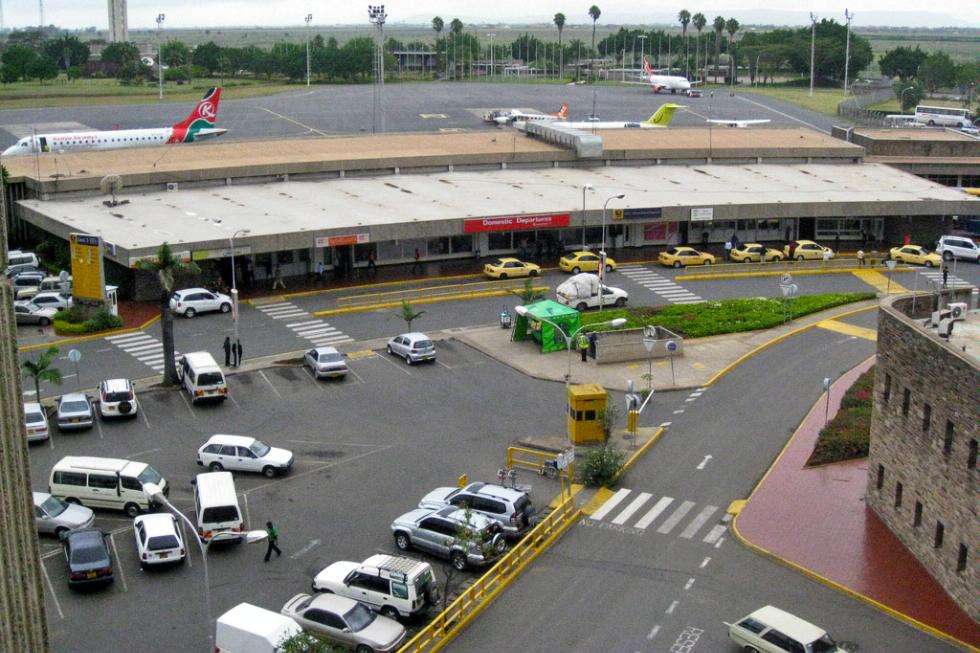 kenyaphotos
Jomo Kenyatta International Airport, Nairobi
Nairobi's airport, which aspires to be an international hub, was built to support about 2.5 million passengers and now averages about double that. As a result, the Kenyan government announced plans to expand the airport. That was in 2005, they never quite finished, and a 2013 fire pretty much put the airport back to square one.

I've been to JKIA, and it reinforces all of the stupid stereotypes about Africa that you wish weren't true. It's hot, ugly, dirty and confusing, full of touts and scam artists and perpetually overcrowded. African airports don't have to be like this, of course: The Marrakesh airport is one of the most beautiful in the world, and Johannesburg's O.R. Tambo airport is at least efficient.

Perhaps someday, the Nairobi airport improvement project will be finished. Until then, this Third World construction site remains a place for travelers to avoid. 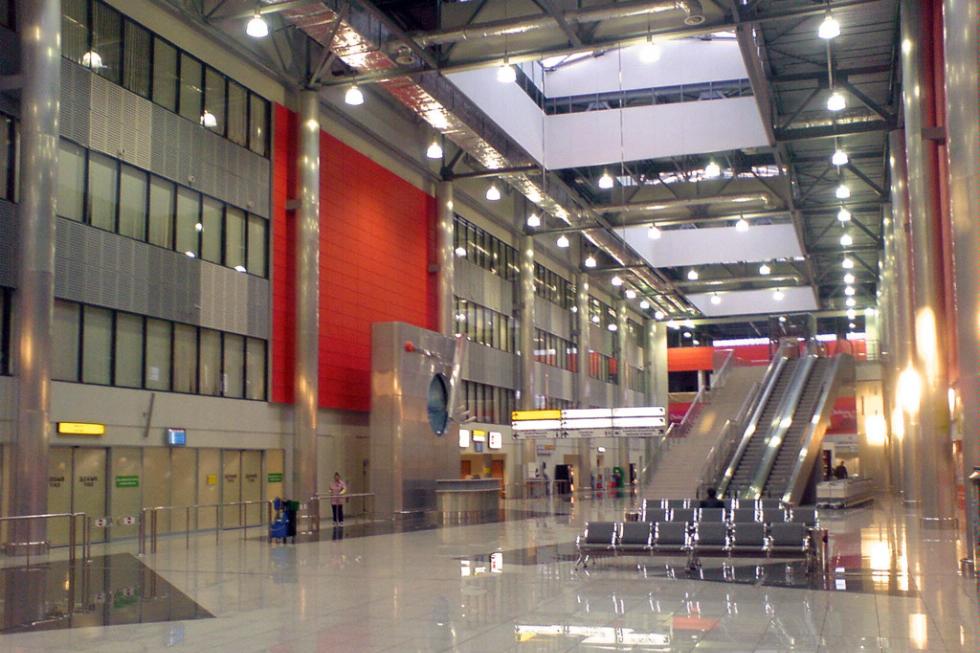 killerbass
Moscow Sheremetyevo Airport Terminal B/C, Russia
One of the two airports rated "two stars" by global consulting firm Skytrax (nobody got one star), SVO B/C got particularly bad marks for anything where you have to interact with airport staff: their attitude, their language skills, and the speed with which they process passengers.

Reviewers suggest that you brush up on your Russian if you intend to transfer flights, because signboards and staff tend not to work in English. Apparently, you can fix up a Russian airport, but it's harder to fix up Russian customer service. (In capitalist Russia, customer services you!)

Depressingly, SVO Terminal B/C is partially a new terminal, but it still got one or two-star rankings from Skytrax on "leisure facilities," "baggage hall," and "meet and greet." It's also several miles away from the rest of the airport and from its rail station, making inter-terminal connections difficult. Air France cautions, "Take official claims of short transfer times with a pinch of salt: delays of up to two hours have been reported."

Fortunately, there's a better alternative nearby: Domodedovo Airport, which generally gets better rankings and reviews. 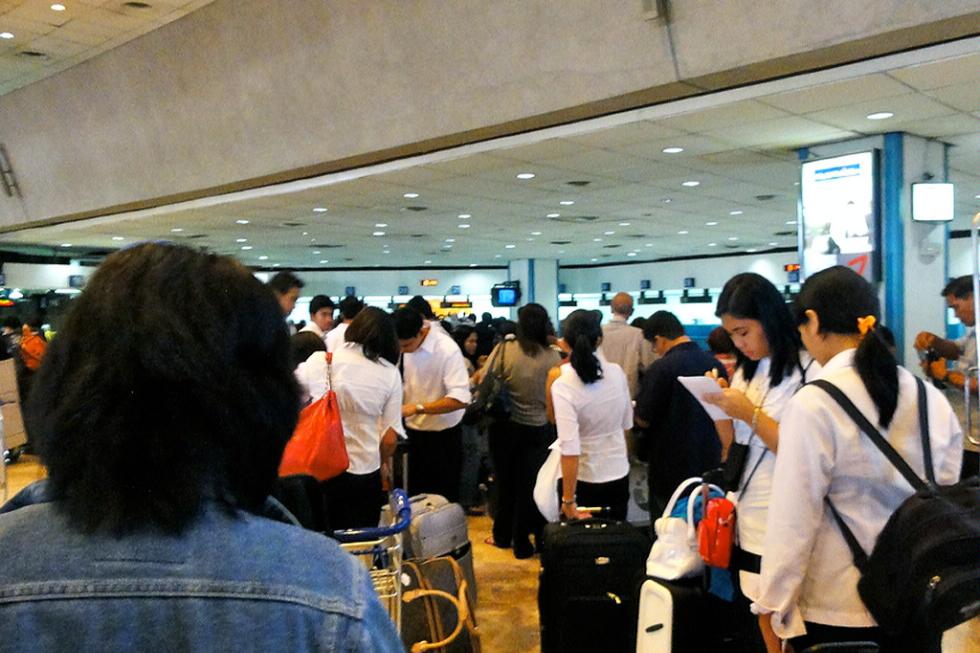 "The terminal has been a frequent target of criticism with travellers and the business community complaining it is congested, run-down and filthy, with toilets that do not work," Agence France Presse commented. According to SleepingInAirports.net, bribery and theft are also rampant in the terminal.

The negative press attention seems to have had some effect; this November the Philippine government said it would renovate the terminal starting in January. It looks like changes can't come too soon.

Photo Caption: Terminal 1 in Manila Airport in the Philippines.