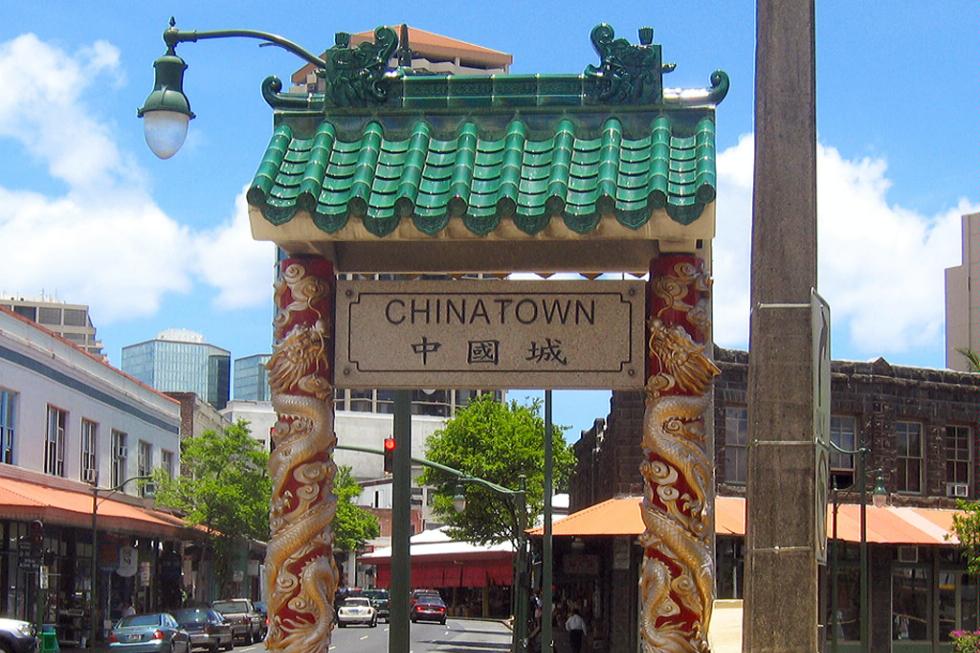 By
Stroll Through Chinatown
By Jeanette Foster

Honolulu's historic Chinatown is a mix of Asian cultures, all packed into a small area where tangy spices rule the cuisine, open-air markets have kept out the mini-malls, and the way to good health is through acupuncture and herbalists.

Photo Caption: The entrance to Chinatown in Honolulu, Hawaii. 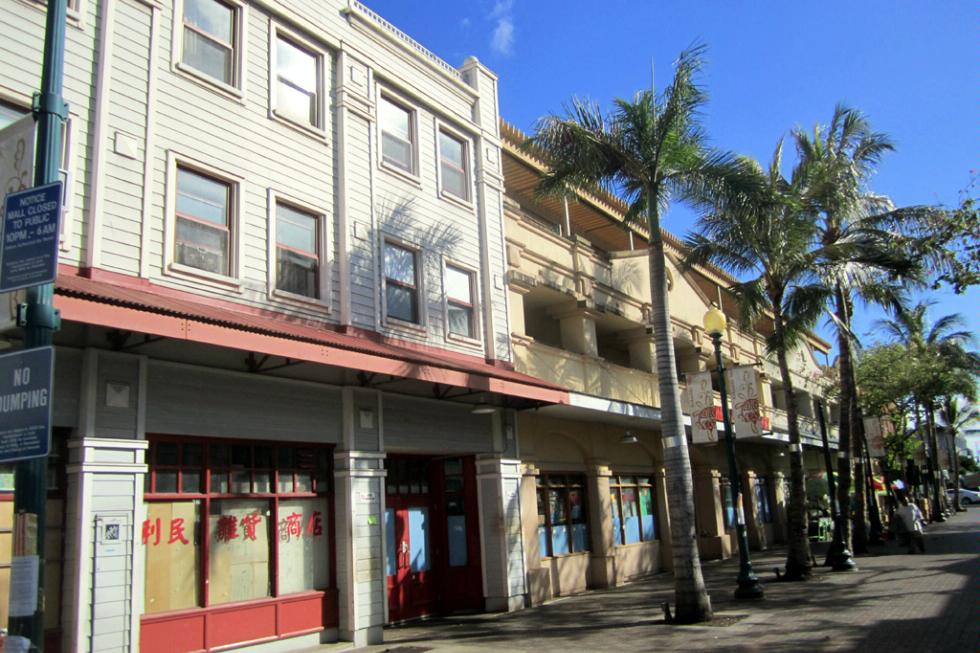 wallyg
Hotel Street
During World War II, Hotel Street was synonymous with good times. Pool halls and beer parlors lined the blocks, and prostitutes were plentiful. Nowadays the more nefarious establishments have been replaced with small shops, from art galleries to specialty boutiques. As you wander up and down this street, browsing the shops, head to the intersection with Smith Street. On the Diamond Head (east) side of Smith, you'll notice stones in the sidewalk; they were taken from the sandalwood ships, which came to Hawaii empty of cargo except for these stones, which were used as ballast on the trip over. The stones were removed, and the ships' hulls were filled with sandalwood for the return to the mainland. 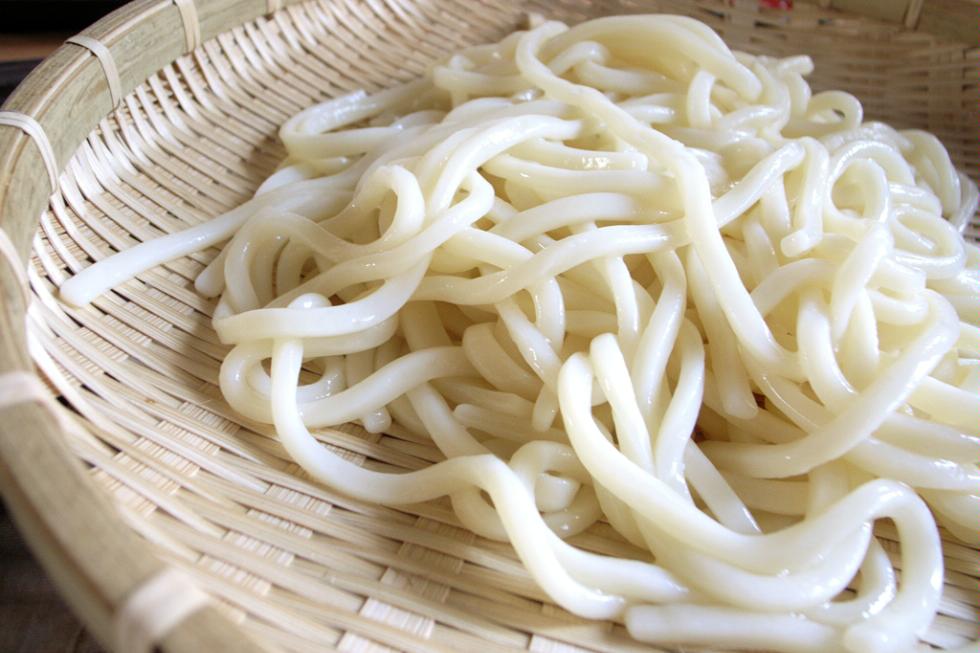 spilt-milk
Yat Tung Chow Noodle Factory
The delicious, delicate noodles that star in numerous Asian dishes are made here, ranging from threadlike noodles (literally no thicker than embroidery thread) to fat udon. There aren't any tours of the factory, but you can look through the window and watch as dough is fed into rollers at one end of the noodle machines; perfectly cut noodles emerge at the other end. 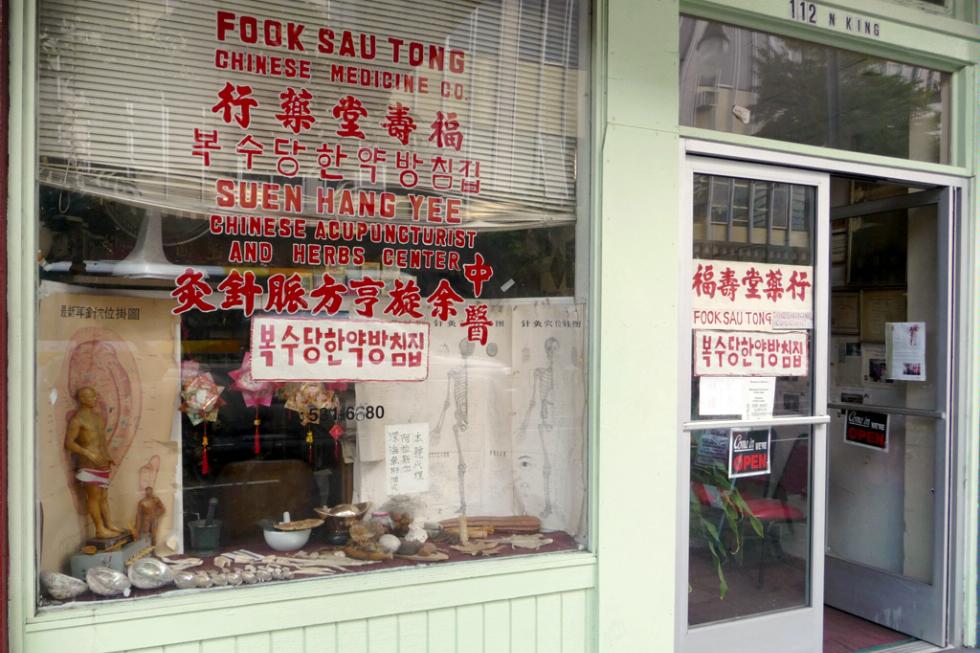 oggiedog
Viet Hoa Chinese Herb Shop
Here Chinese herbalists act as both doctors and dispensers of herbs. There's a wall of tiny drawers all labeled in Chinese characters. The herbalist quickly pulls from the drawers various objects that range from dried flowers and ground-up roots to such exotics as mashed antelope antler. The patient then takes the concoction home to brew into a strong tea. 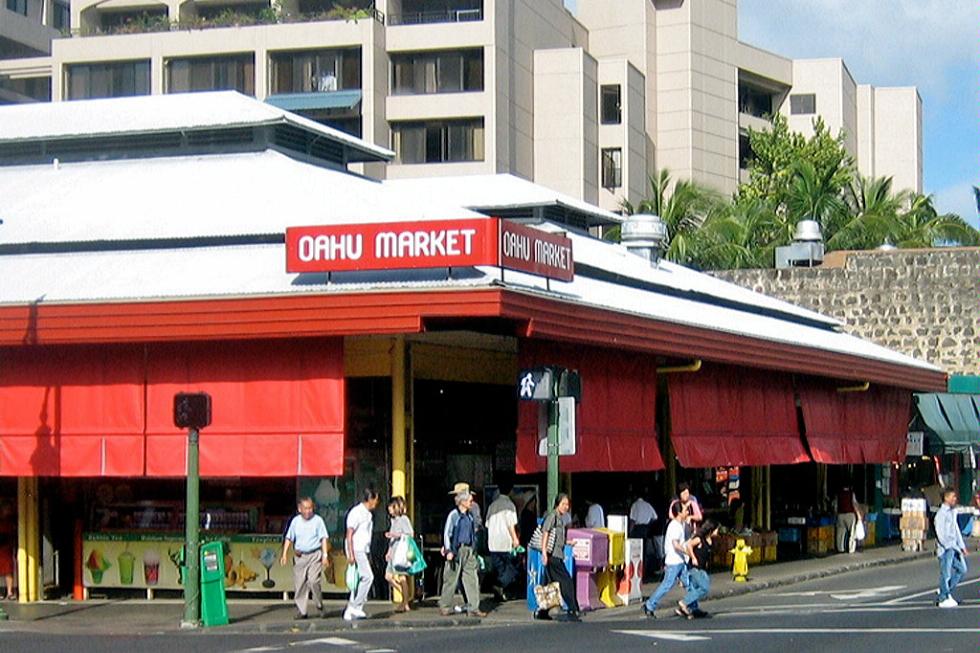 mvjantzen
Oahu Marketplace
Those interested in Asian cooking will find all the necessary ingredients here, including pigs' heads, poultry (some still squawking), fresh octopus, salted jellyfish, pungent fish sauce, fresh herbs, and thousand-year-old eggs. The friendly vendors are happy to give instructions on how to prepare these exotic treats. The market has been at this spot since 1904. 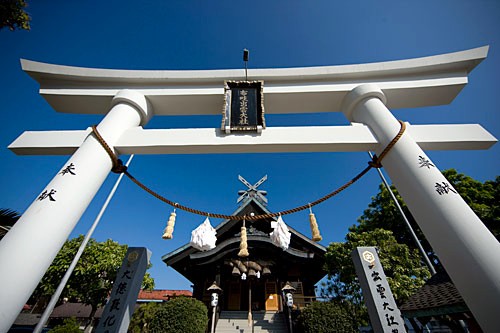 Marco Garcia
River Street Pedestrian Mall
The statue of Chinese revolutionary leader Sun Yat-sen marks the beginning of this wide mall, which borders the Nuuanu Stream. Shade trees, park benches, and tables where seniors gather to play mah-jongg and checkers line the mall. There are plenty of takeout restaurants along River Street if you'd like to eat lunch outdoors. If you're up early (5:30am in summer and 6am in winter), you'll see seniors practicing tai chi.

Photo Caption: Chinatown's first inhabitants were plantation laborers who set up small shops and restaurants around River Street when their contracts were up.
advertisement 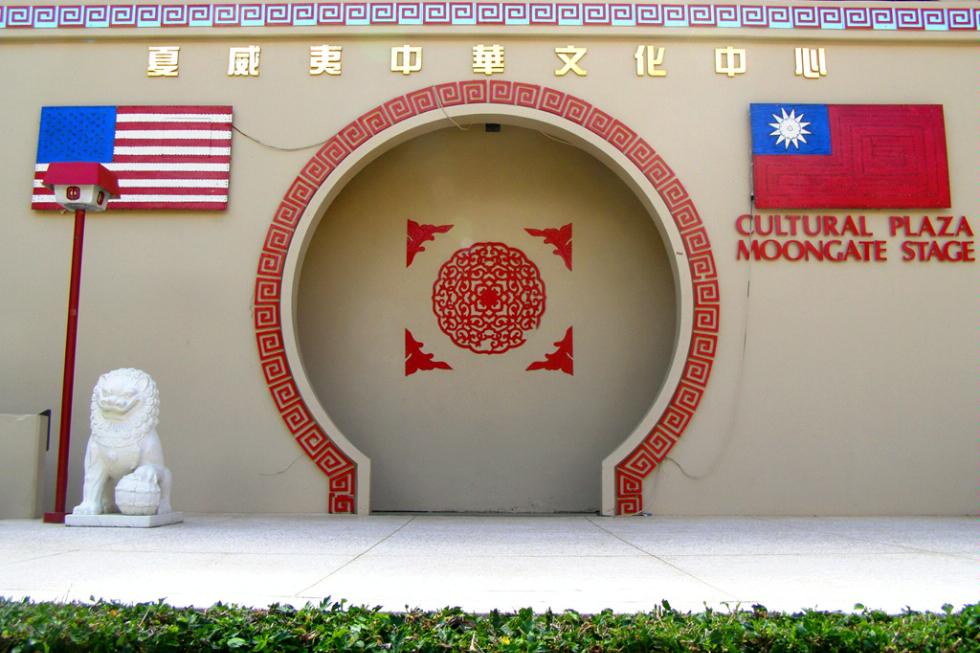 shelleybrunt
Chinatown Cultural Plaza
This modern complex is filled with shops featuring everything from tailors to calligraphers (most somewhat more expensive than their street-side counterparts), as well as numerous restaurants, Asian magazine vendors, and even a small post office for those who want to mail cards home with the "Chinatown" postmark. The best feature of the plaza is the Moongate Stage in the center, the site of many cultural presentations, especially around the Chinese New Year.

Photo Caption: The Moongate Stage at the Chinatown Cultural Plaza in Honolulu, Hawaii. 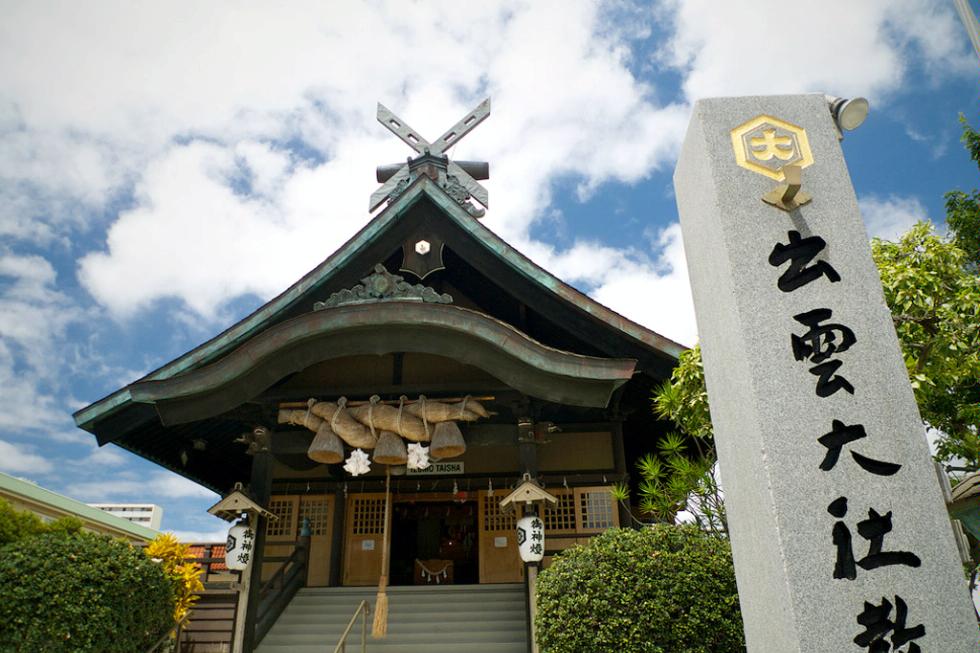 fhke
Izumo Taishakyo Mission Cultural Hall
This small wooden Shinto shrine, built in 1923, houses a male deity (look for the X-shaped crosses on the top). Members of the faith ring the bell out front as an act of purification when they come to pray. Inside the temple is a 100-pound sack of rice, symbolizing good health. 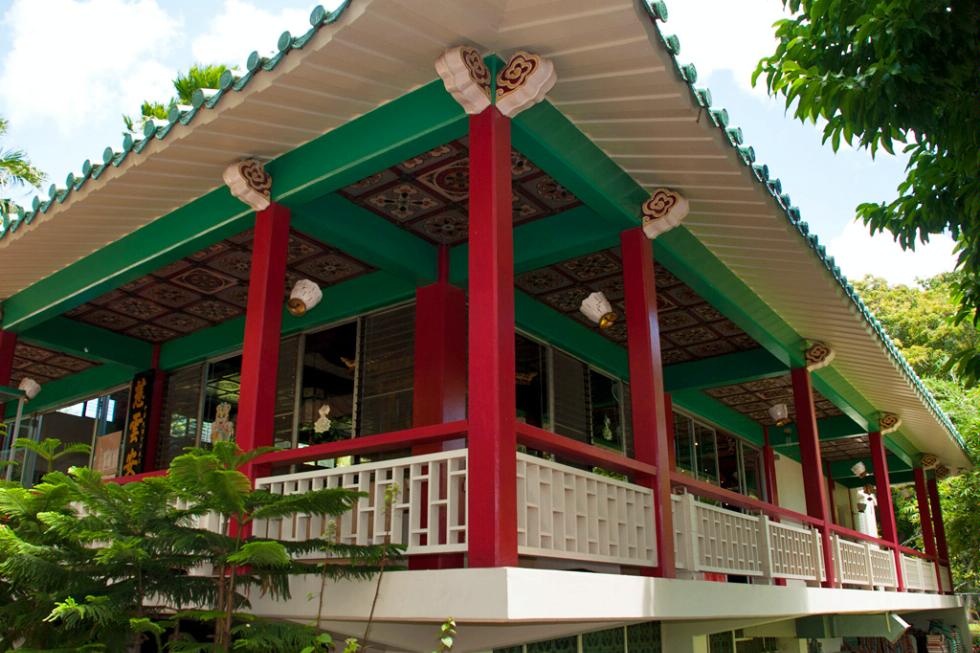 christinechauvin
Kuan Yin Temple
This Buddhist temple, painted in a brilliant red with a green ceramic-tiled roof, is dedicated to Kuan Yin Bodhisattva, the goddess of mercy, whose statue towers in the prayer hall. The temple is still a house of worship, so enter with respect and leave your shoes outside. You may see people burning paper "money" for prosperity and good luck or leaving flowers and fruits at the altar (gifts to the goddess). A common offering is the pomelo, a grapefruitlike fruit that's a fertility symbol as well as a gift, indicating a request for the blessing of children. 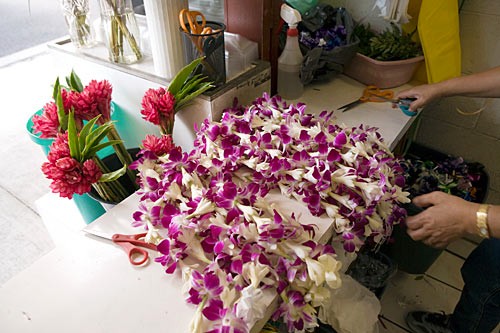 Marco Garcia
Maunakea Street
Numerous lei shops line this colorful street, where the air is heavy with the aroma of flowers being woven into beautiful treasures. Not only is this the best place in all of Hawaii to get a deal on leis, but the size, color, and design of the leis made here are exceptional. 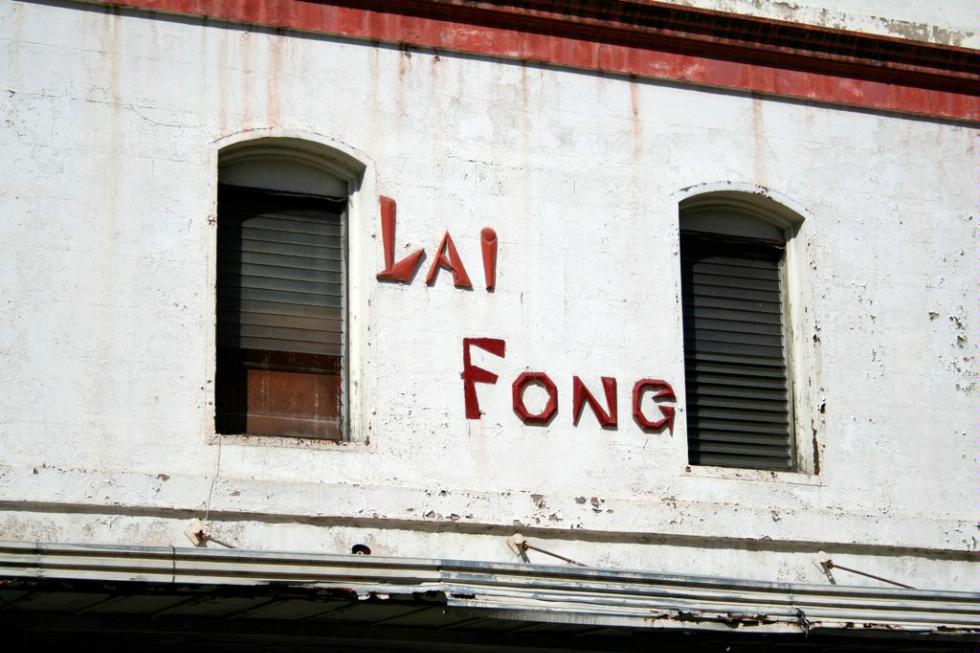 mandelicious
Lai Fong Department Store
Before you enter this classic Chinatown store, owned by the same family for more than 80 years, check out the sidewalks on Nuuanu Avenue -- they're made of granite blocks used as ballast by ships that brought tea from China to Hawaii in the 1800s. Walking into Lai Fong is like stepping back in time. The old store sells everything from precious antiques to god-awful knick-knacks to rare Hawaiian postcards from the early 1900s -- but it has built its reputation on its fabulous selection of Chinese silks, brocades, and custom dresses. 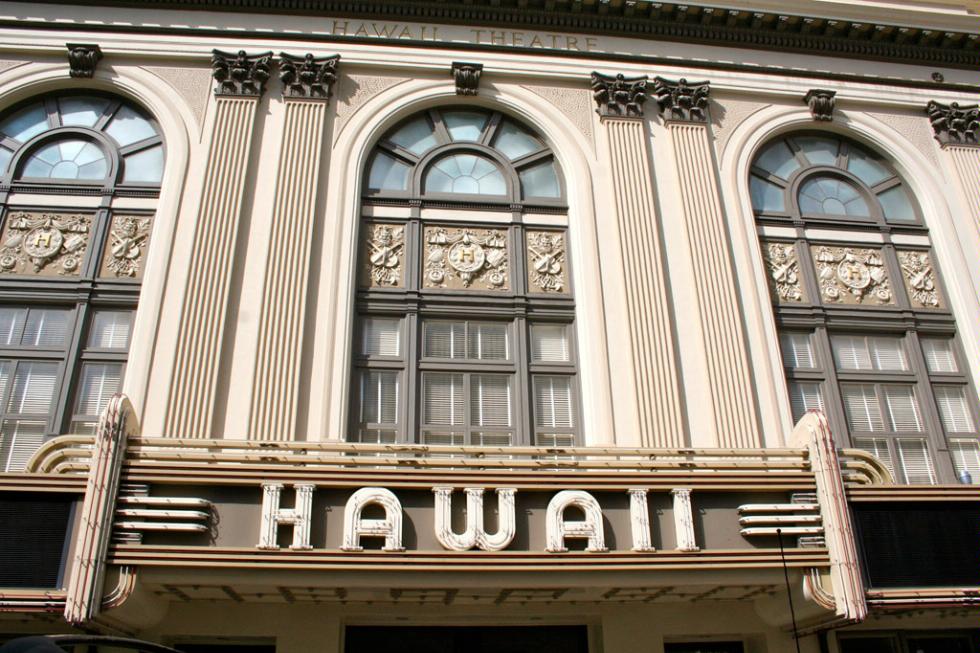 mandelicious
Hawaii Theatre
This restored 1920 Art Deco theater is a work of art in itself. It hosts a variety of programs, from the Hawaii International Film Festival to Hawaiian concerts.