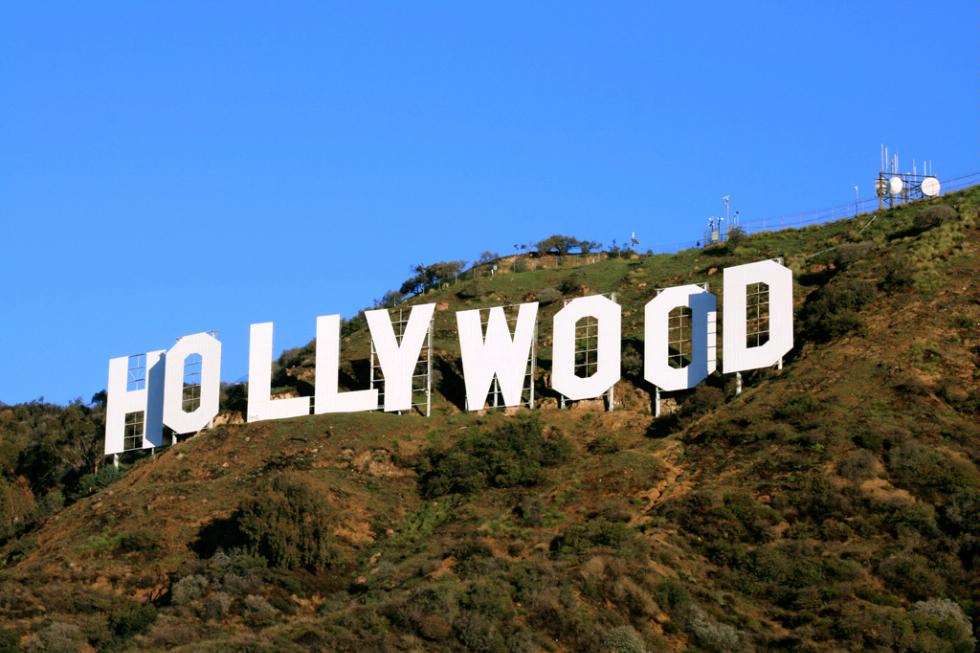 By
Star Maps
By Garth Mueller

Have you done your homework by devouring countless hours of movies, television, and music? Well, no one said that was a spectator sport -- you'll need to start early and finish strong to cram the following tour into a single blockbuster day. 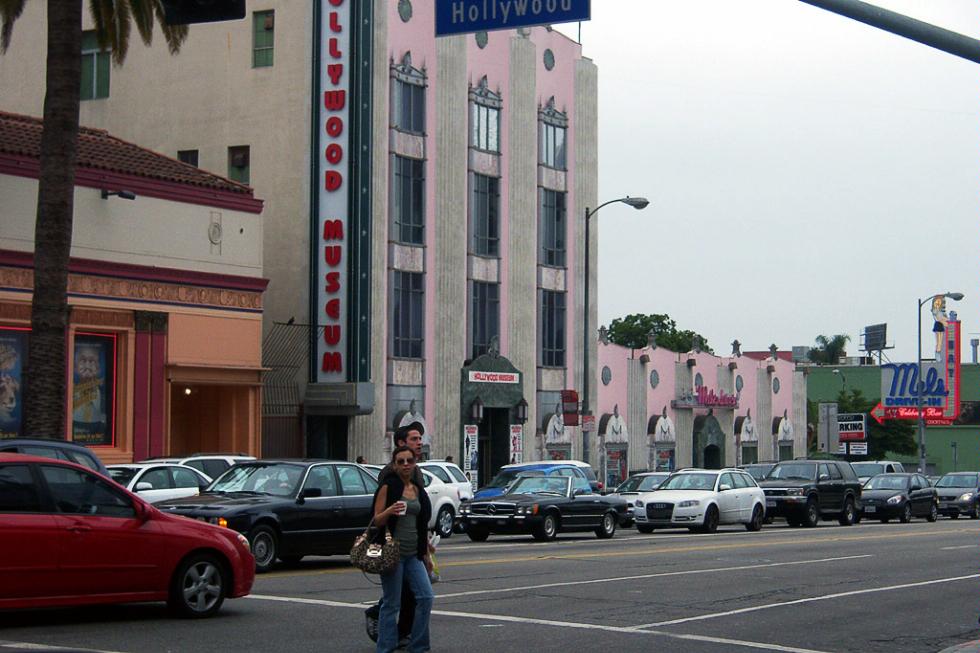 Loren Javier
Hollywood Museum
Don't make the mistake of lumping this in with tourist traps like the Hollywood Wax or Ripley's Believe It or Not! museums. This museum -- occupying the historic Max Factor building, restored to its full Art Deco loveliness -- traces the history of film with 5,000 displays of rare Hollywood memorabilia, including Hannibal Lecter's cell block, Indiana Jones's whip, Rita Hayworth's makeup case, Cary Grant's Rolls-Royce, and the earliest film cameras. 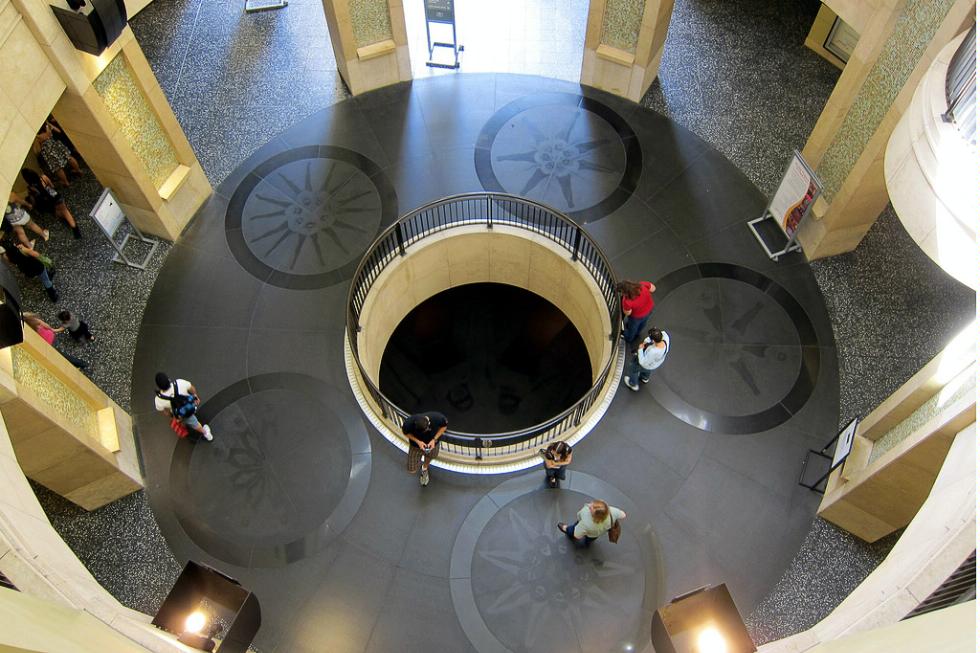 joevare
Dolby Theatre
If you're a person who hosts an Oscar party every year at home with your own printed ballots, a 30-minute walking tour of the Dolby Theatre will tickle your fancy. You'll see the grand entrance (you'll have to imagine the red carpet), a few Oscar statuettes, the 3,300-seat auditorium (loosely) inspired by a European opera house, and the backstage VIP area. 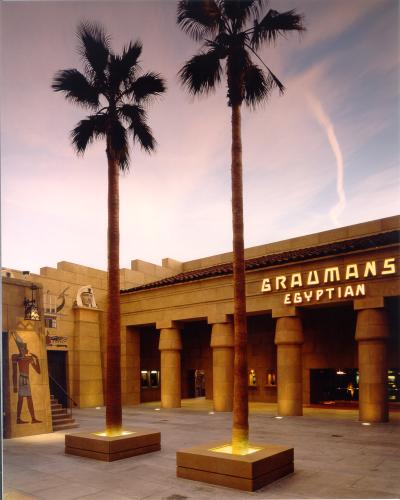 Tom Bonner/Courtesy of the Egyptian Theatre
Egyptian Theatre
In 1922, as the hunt closed in on King Tut's tomb, Sid Grauman unveiled the Egyptian Theatre, the second of his spectacular, themed movie palaces. Reopened in 1998 following a multimillion-dollar restoration, the theater is now the home of the nonprofit American Cinematheque, which caters to serious film enthusiasts. It offers fresh, 70mm prints of classics (Lawrence of Arabia, The Sound of Music); programs of national cinema (classic Italian, Russian fantastik, and British new wave); director retrospectives (Douglas Sirk, Orson Welles); and in-person tributes to actors and filmmakers (George Clooney, Quentin Tarantino). If you're lucky you can catch the monthly screening of Forever Hollywood, an hour-long look at a century of cinema. 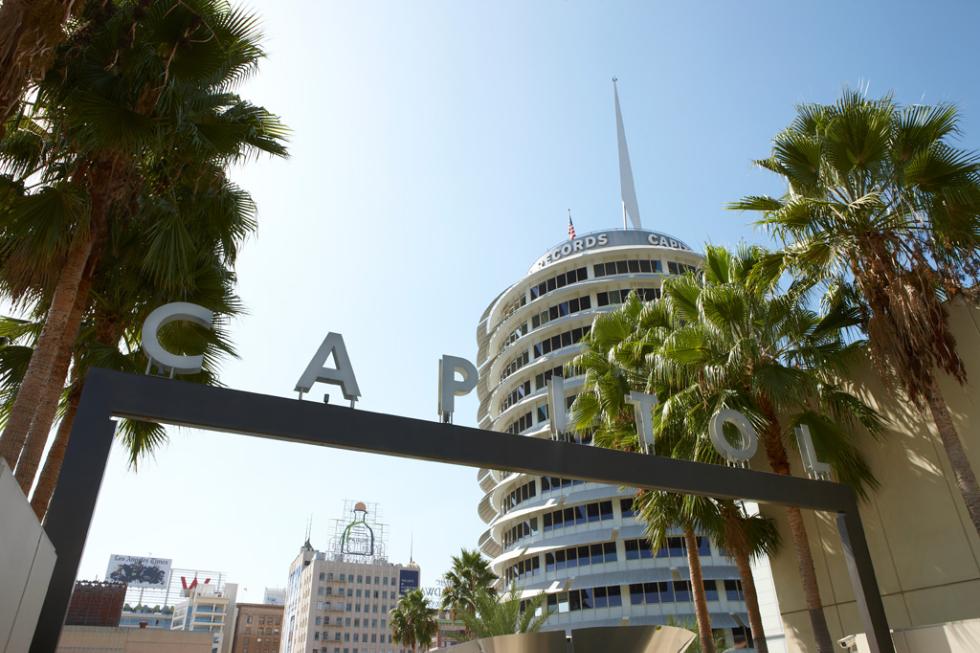 Ian White
Capitol Records
The 13-story landmark 2 blocks north of the world-famous corner of Hollywood and Vine looks like a gigantic stack of 45 rpm records on a turntable (a heap of mp3s doesn't have the same magic, does it?), but it was actually designed by modernist architect Welton Becket to be the world's first circular office building when it debuted in 1956. Frank Sinatra banged out 19 albums in these hallowed studios, which also recorded the likes of Nat King Cole, Ella Fitzgerald, Dean Martin, and the Beach Boys. The first record company based on the West Coast, Capitol Records also imported British acts such as the Beatles, Pink Floyd, Duran Duran, and Radiohead. 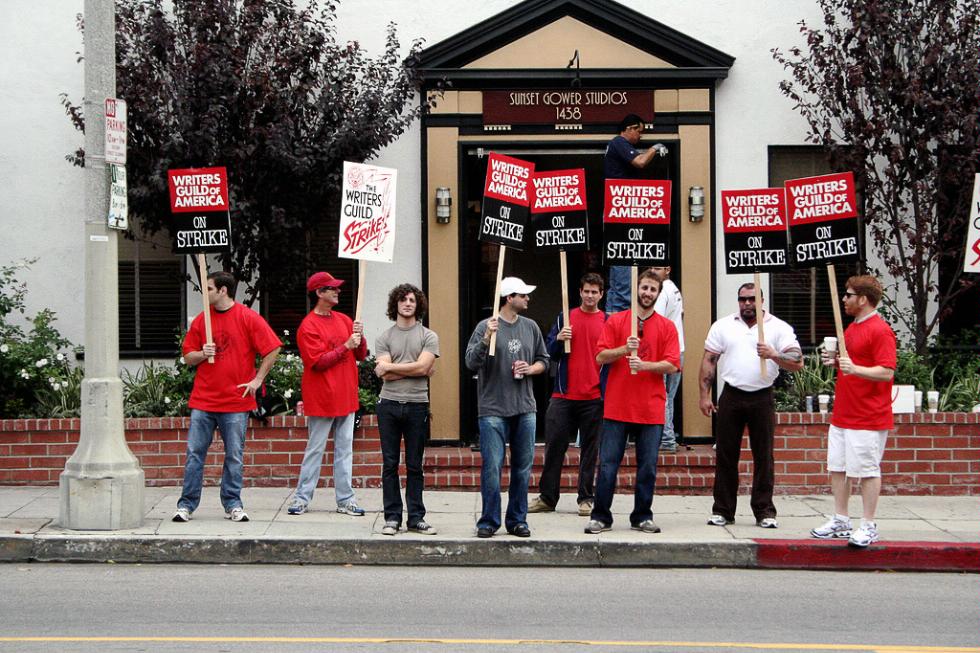 Amy Meredith
Sunset-Gower Studios
In an old tavern on the northwest corner of Sunset and Gower, the Nestor Company launched the first film studio in Hollywood in 1911. Using natural California sunshine and a small wooden stage, several one reelers were shot each week: one Western, one drama, one comedy. In 1912 Nestor merged with Carl Laemmle's Universal Film Company. The original building was razed in 1936 to make room for the CBS Columbia Square radio studio, which can be seen today. On the southeast corner of the same intersection sits the Sunset-Gower studios, formerly the home of Columbia Pictures Studios (1921-72), which produced countless gems such as It Happened One Night, From Here to Eternity, Dr. Strangelove, and Funny Girl. On the southwest corner known as Gower Gulch, cowboy extras used to loiter in hopes of gaining work on the many Westerns filming nearby.

Photo Caption: Writers on strike outside the famous Sunset-Gower studios in the Hollywood section of Los Angeles, California 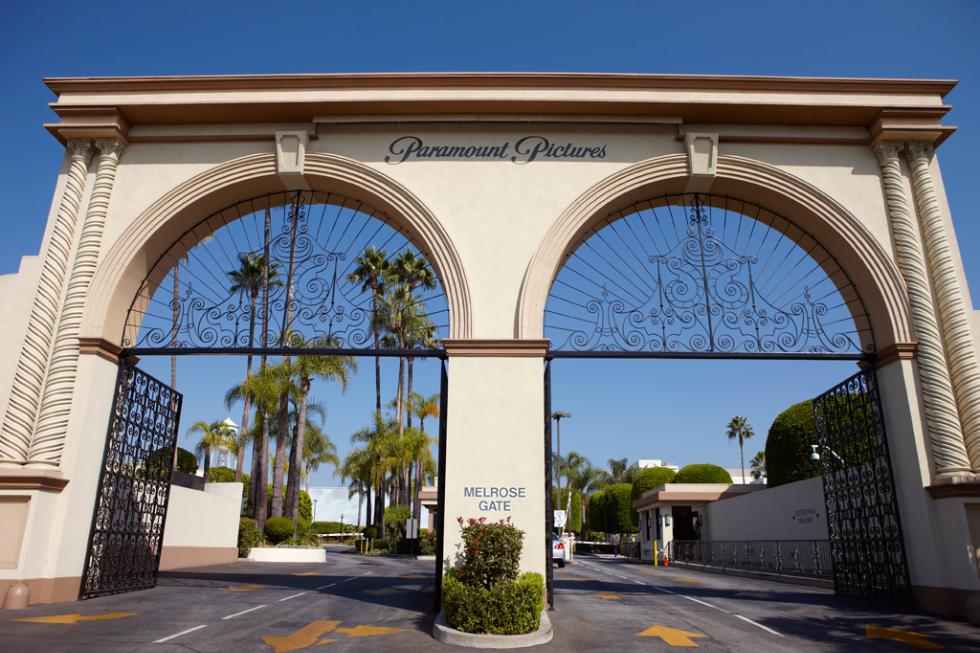 Ian White
Paramount Studios
Paramount Studios traces its origins to a rented horse barn near Sunset and Vine in 1913. Thirteen years later, it moved to its current location and never left, unlike the rest of the major studios in Hollywood. The back lot eventually gobbled up neighboring R.K.O. Pictures, and the distinctive globe is still visible in the southwest corner. Book tickets in advance for a 2-hour golf cart tour, which scoots you through the "living history" of the film and television soundstages. This is where the stars punch the clock, so keep your eyes peeled for sightings. Don't get so caught up gawking that you forget whose footsteps you're walking in: Rudolph Valentino, Mary Pickford, W. C. Fields, Alfred Hitchcock, the Marx Brothers, and, um, Glee. Before leaving, make sure to get a photo of yourself in front of the famous Bronson Gate, the arched gateway you may remember Gloria Swanson driving through in Sunset Boulevard. 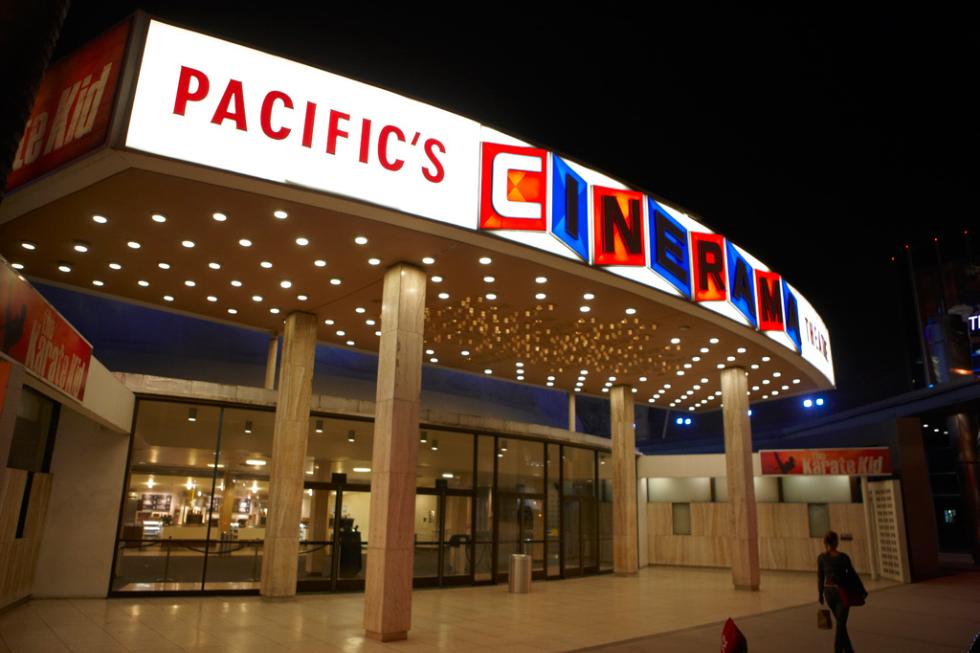 Ian White
Cinerama Dome and ArcLight Cinemas
Built in 1963 to showcase the widescreen format, the landmark Cinerama Dome now belongs to the state-of-the-art ArcLight Complex of 14 theaters. While the Dome is the coolest with its curving screen, all of the theaters feature sumptuous assigned seating, immaculate sound, and detail-oriented service. 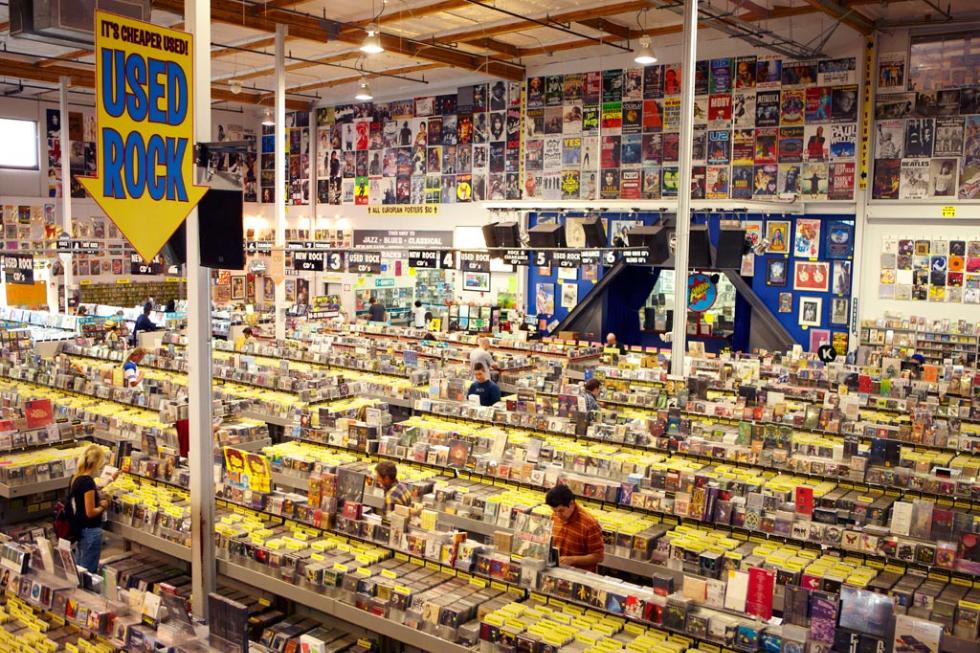 Ian White
Amoeba Music
A mecca for music lovers and a true survivor, this independently owned store spans an entire block of Sunset and offers the biggest and baddest selection of tunes in town, as well as live, in-store afternoon performances by chart-topping bands and cult favorites alike. 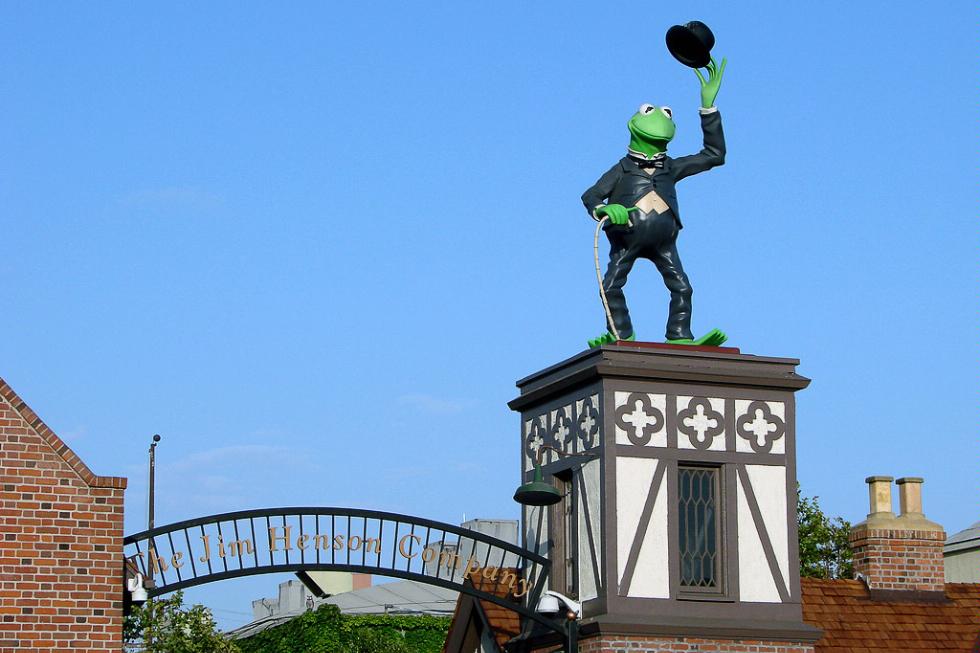 Amy Meredith
Charlie Chaplin Studios
In 1917, on acres of orange groves at Sunset and La Brea, Charlie Chaplin built himself a studio, a row of English-style cottages, where he shot many of his classics, such as The Gold Rush, City Lights, and Modern Times. Today Jim Henson Productions occupies the building, which explains the statue of Kermit the Frog dressed as The Little Tramp. 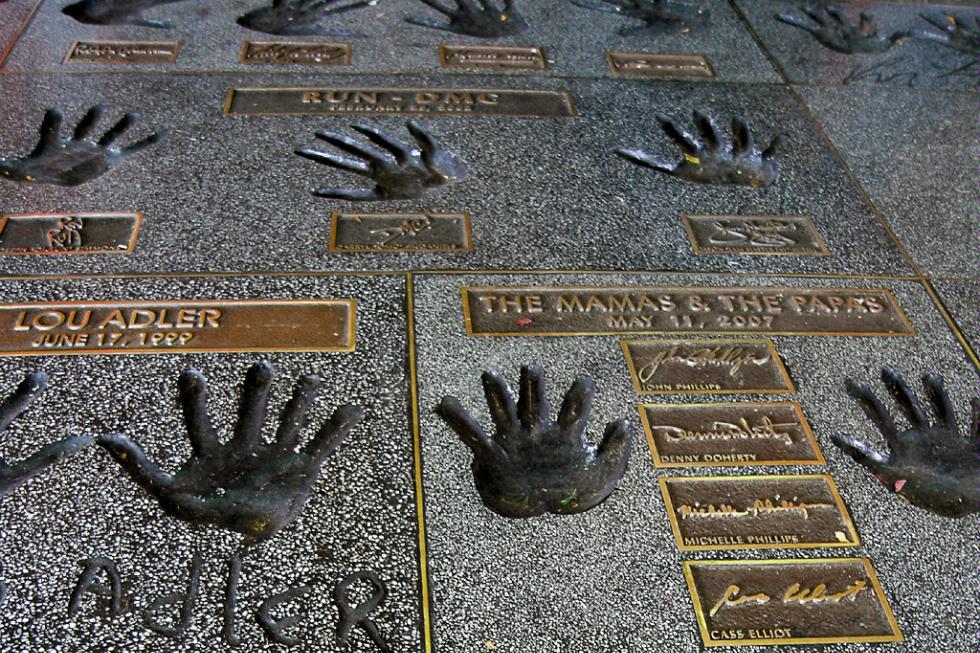 Yukiko Yamamoto
Guitar Center's Rock Walk and Museum
The Rock Walk, the sidewalk in front of the Guitar Center, is the rock equivalent of the forecourt of Grauman's Chinese Theatre. The concrete has been high-fived by the talented hands of Chuck Berry, Jerry Lee Lewis, Jimmy Page, Eddie Van Halen, and more. There's also an awesome display of memorabilia such as Eddie's homemade red Kramer guitar, Stevie Ray Vaughn's denim jacket, Keith Moon's drum kit, and platform boots from KISS. Oh yeah, you can buy a guitar here, too. 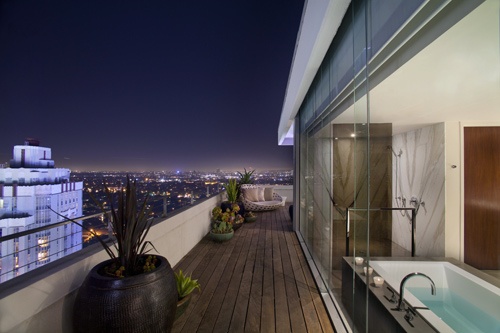 Courtesy Andaz Hotel
Los Angeles
Andaz West Hollywood (Riot House) This monument to mayhem began life innocently enough in 1958 as the Gene Autry Hotel. By the mid-'60s, the hotel became the stomping grounds (literally) of rock 'n' rollers who came to play nearby clubs on the Strip. Over the years the Riot House, as it came to be called, became a sort of bad-boy finishing school; members of Led Zeppelin rode their motorcycles up and down the hallways, and, on separate occasions, Keith Richards of the Rolling Stones and Keith Moon of the Who hurled televisions out of 10th-floor windows.

Details: Read our review of the Andaz West Hollywood 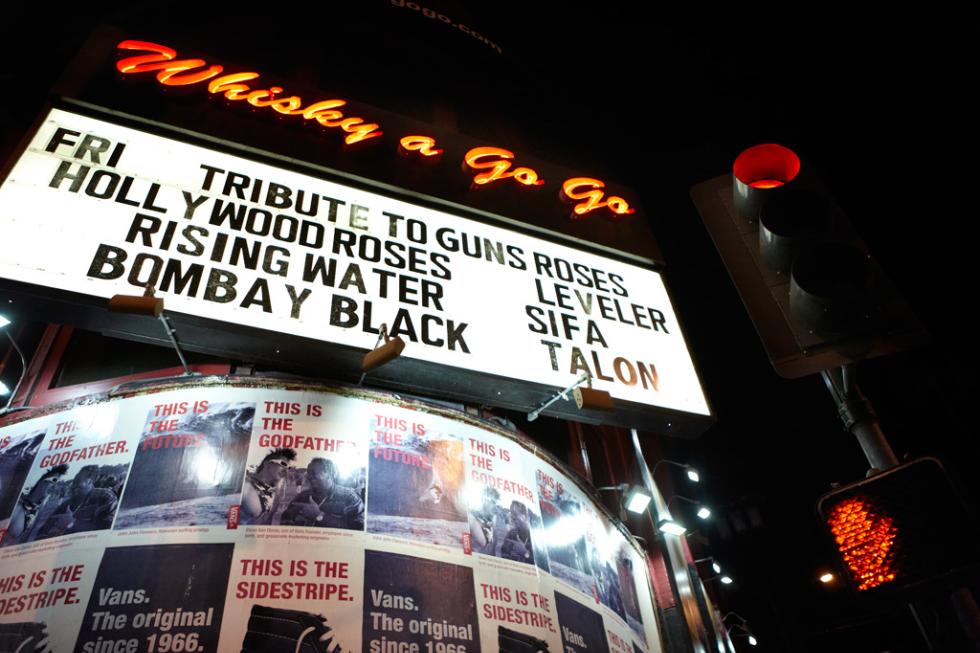 Ian White
Whisky a Go-Go
Aside from its footnote as the birthplace of go-go dancing, the Whisky opened in 1964 and was the epicenter of the Los Angeles rock scene for 3 decades. The 1960s saw the Doors, the Byrds, Love, and Buffalo Springfield. The 1970s imported Led Zeppelin, the Who, and Roxy Music. The lineup in the later '70s edged toward the homegrownpunk rock of the Germs, the Runaways, and X. Then came the pop metal of Van Halen, followed by Mötley Crüe, and Guns N' Roses in the '80s.

Details: Read our review of Whisky a Go-Go


Photo Caption: Bands like the Doors got their start at the famed Whisky A Go-Go in Los Angeles, California. 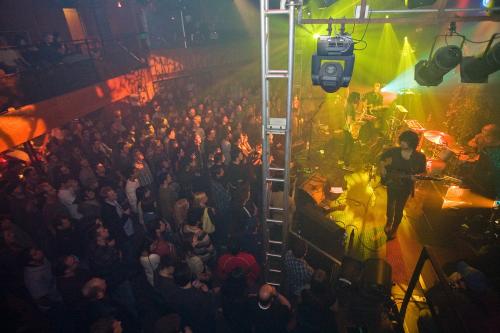 Melissa Fargo
The Troubadour
In the 1960s the Troubadour was a hotbed for folkies such as Bob Dylan and Joni Mitchell. Over the years, the small club helped launch the careers of othersinger-songwriters: James Taylor, Elton John, Randy Newman, and Tom Waits. And in 1985, during the heyday of heavy metal, Guns N Roses made its debut on this stage and caught the eye of a Geffen A&R rep. My favorite wish-I-was-there moment happened in 1974, when John Lennon (on his 18-month-long "lost weekend" in Los Angeles) and Harry Nilsson were tossed out for drunkenly heckling the Smothers Brothers.

Details: Read our review of the Troubador