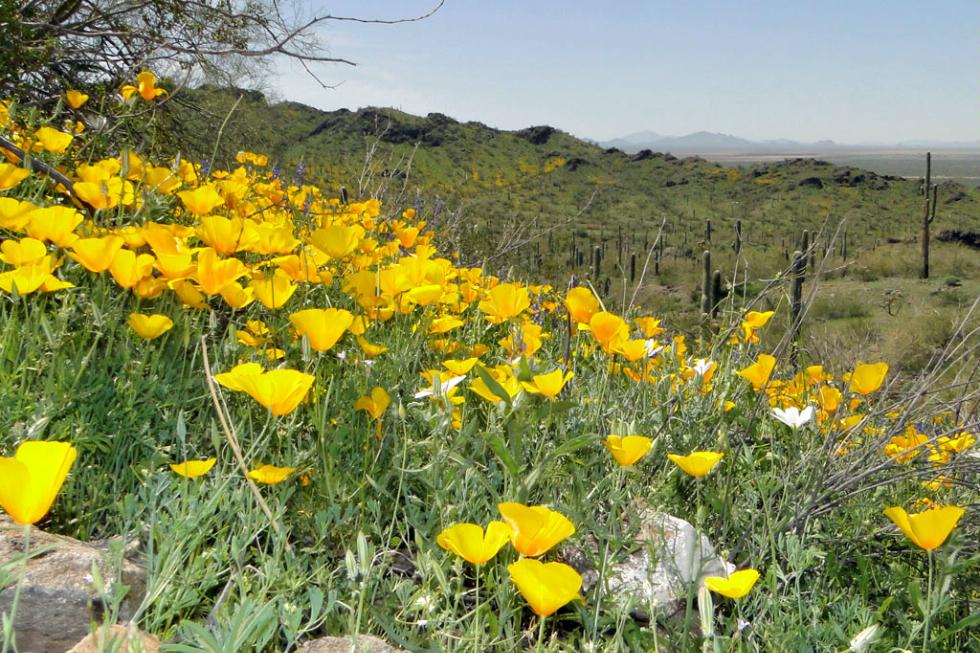 World's Most Beautiful Spring Flowers: When to Travel

By Laura Kiniry
If you don't know when and where to see the best blossoms, chances are you won't -- the timing of the prettiest blooms varies by region and can last just a few weeks.

Whether you want to see Arizona's wildflowers or Scotland's heather, you won't want to miss these 10 great destinations. 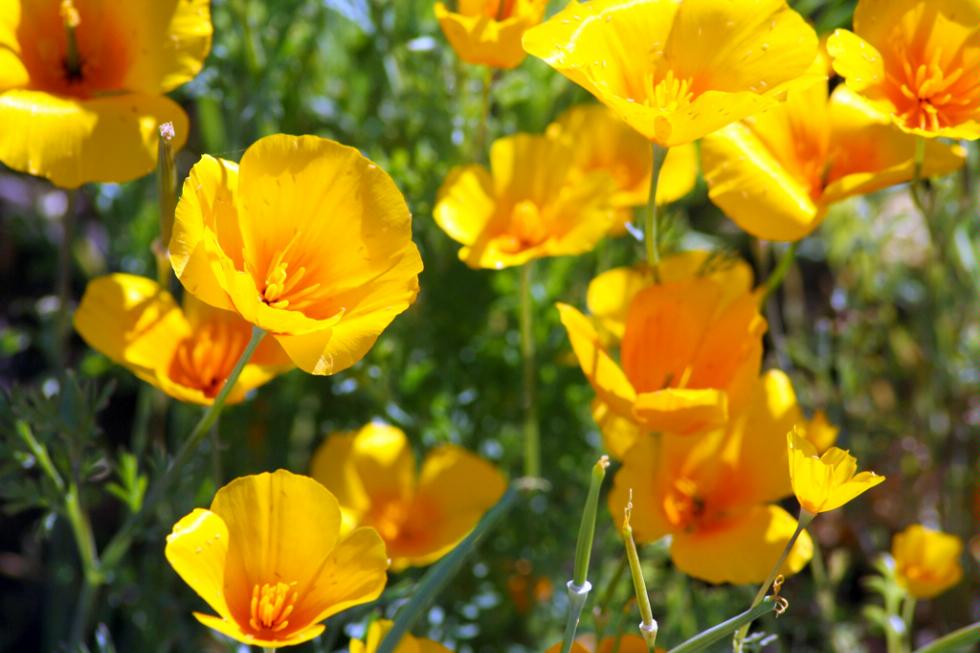 lars hammar
Wildflowers in Southern Arizona
When to Go: It really depends on rainfall, but typically March and April. This is when the hills and roadsides across southern Arizona pop with colors like red, gold, and blue. The region is best known for bright yellow brittlebush and Mexican gold poppies. You may also see wildflowers ranging from African daises to the bright-orange desert globemallow. 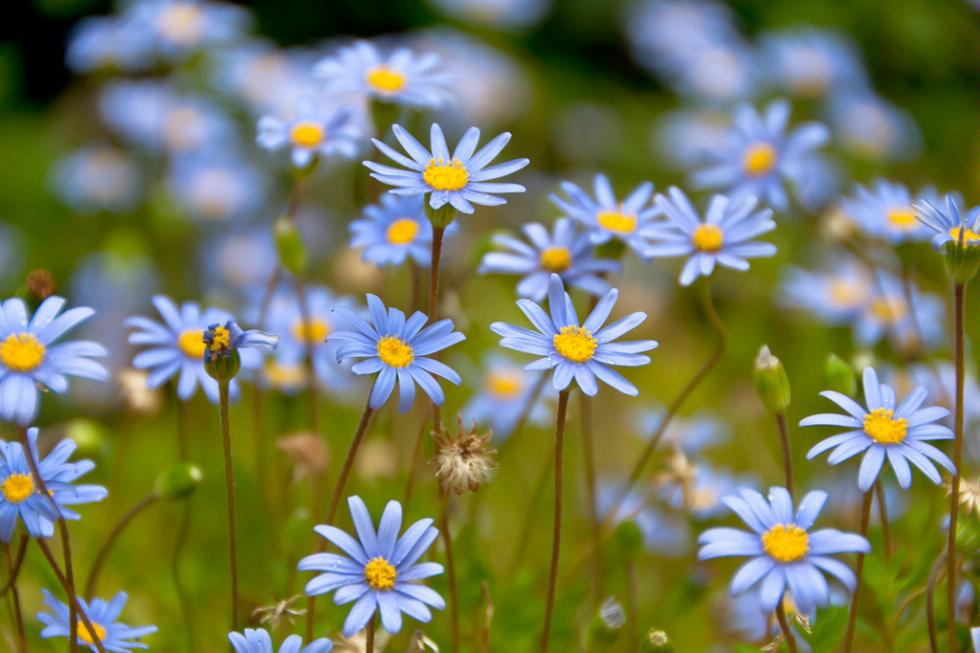 bepcyc
Wildflowers in Cyprus
When to Go: March and April. With 30 kinds of wild orchids -- including Giant and Fan-lipped orchids -- Northern Cyprus boasts an array of color in spring, especially along roadsides and across fields and mountain slopes. The landscape -- dotted with bright oranges and reds, and soft whites and lavenders -- resembles an Impressionist painting.

Where to See the Best Flowers: Running parallel to the North Cyprus coastline, the Kyrenia Mountains are a great place to spot wildflowers. Stop by the North Cyprus Herbarium, housed in the Alevkaya Forest Station on the mountain ridge near the town of Esentepe, to view pressed samples of wildflowers native to the region. Guided orchid and wildflower walks leave from the village of Hisarköy Tuesdays, Thursdays, and Saturdays March through early May (www.walksnorchidsnorthcyprus.com). 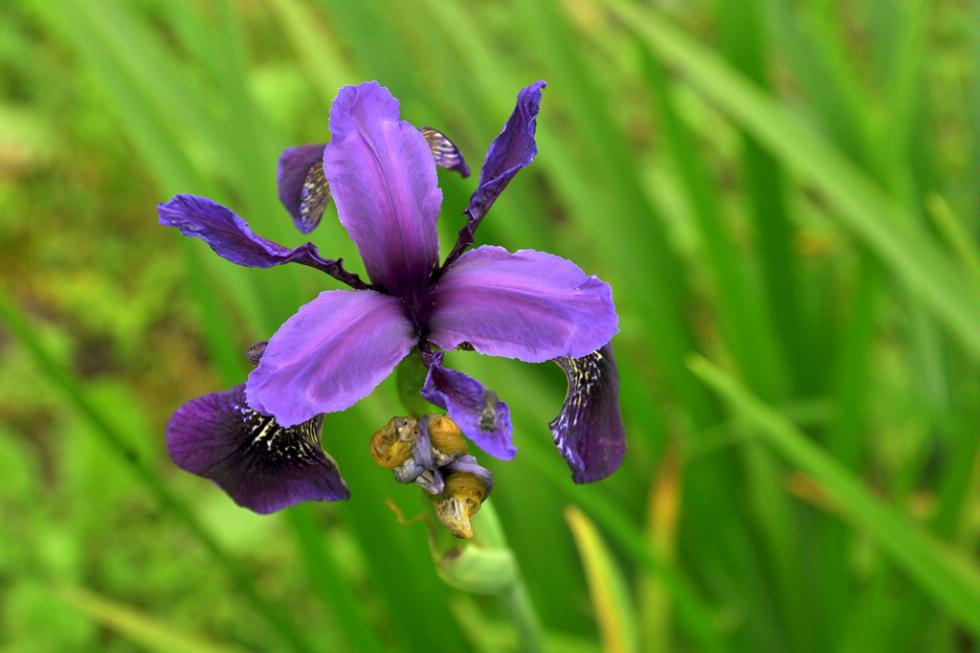 vinayakh
Orchids & Rhododendrons in Bhutan
When to Go: Late March to May are the best months to admire the country's flowering plants, orchids, and rhododendrons. Though generally elusive, the Himalayan blue poppy -- Bhutan's national flower -- may be seen on treks around the country's Gangkhar Puensum region, notably in June and July. Expect to see buttercups, larkspurs, lilies, and geraniums at higher elevations. The more temperate regions are covered in orchids, violets, and white, pink and red rhododendrons.

Where to See the Best Flowers: Mountain passes such as Dochula Pass and Pelela Pass are prime areas to see wildflowers. The Chele La Nature Trek, which offers a panoramic view of the higher Himalayas, is lined with blue poppy, orchids, and rhododendron varietals. 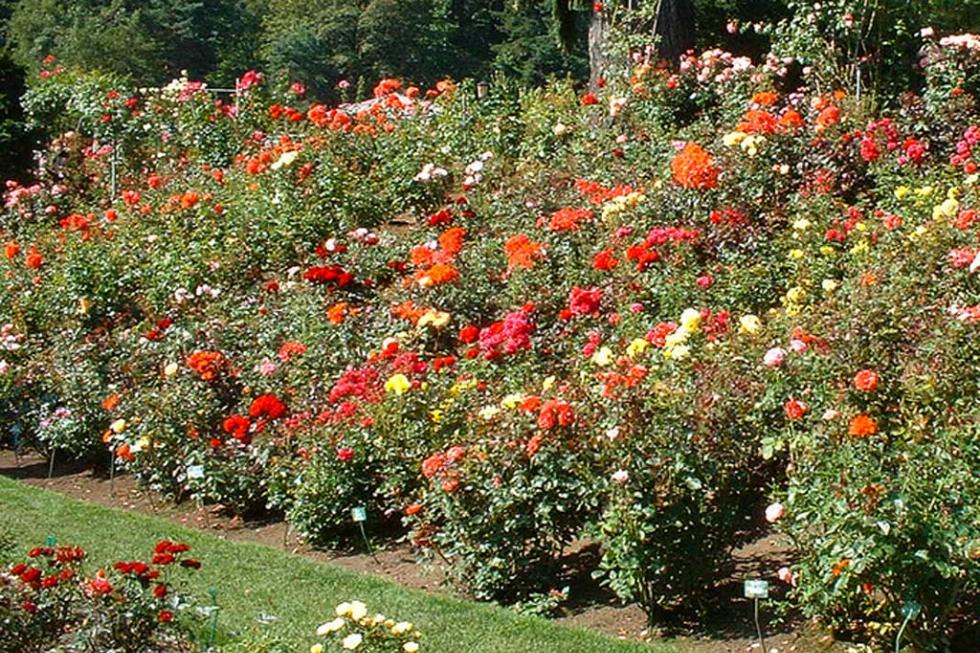 thorsett
Roses in Portland, Oregon
When to Go: May and June. The Rose City's spectacular display of woody perennials blooms annually from April through October, but the blossoms peak in May and June. Portland's mild, wet climate is ideal for growing the many rose varieties. Roses may not be native to the Pacific Northwest, but the flower and city are now synonymous.

Where to See the Best Flowers: In parks throughout Portland -- most notably the International Rose Test Garden in southwest Portland's Washington Park, featuring more than 7,000 colorful rose plants from 550 varieties. The city's annual Portland Rose Festival (www.rosefestival.org) has taken place every spring for over a century. It includes parades, floats, floral walks, and the annual spring rose show. 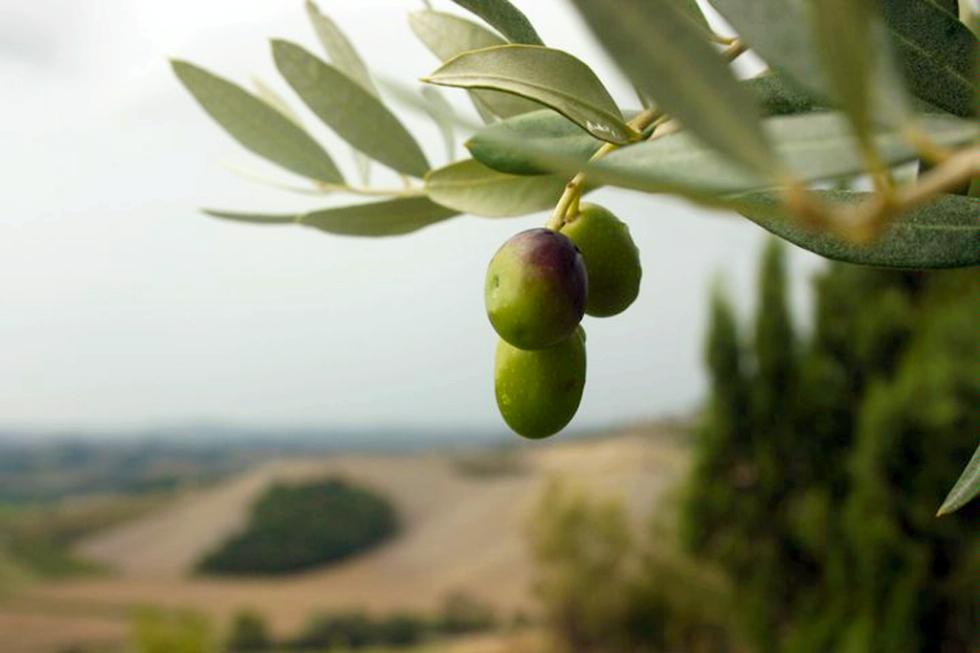 Frommers.com Community
Greenery of Italy's Tuscany Region
When to Go: May, when Tuscany's countryside is covered with the lush greens of grape vines, olive groves, and cypress trees. Many towns throughout the region host parties and festivals to celebrate the season. Along with the greenery, keep an eye out for crimson-colored poppies as well as plenty of lilacs, rosemary, and wisteria.

Where to See the Best Flowers: Head to Tuscany's many vineyards and olive groves. Held in Montespertoli in Tuscany's Chianti wine region, the Chianti Wine Festival takes place May 26 to June 3, 2012 (www.montespertoli.org). 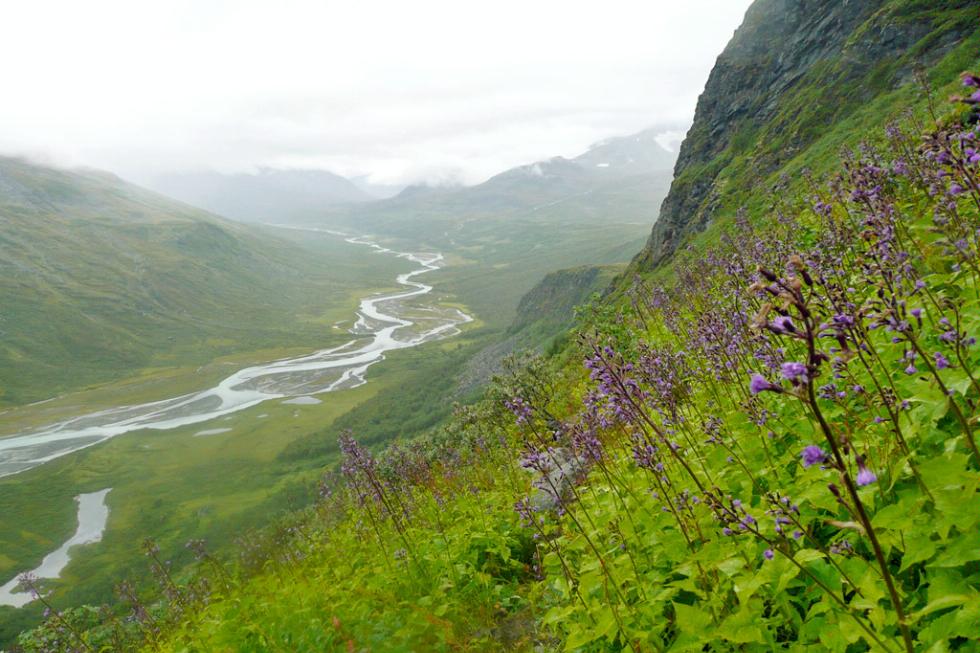 kittysfotos/
Wildflowers in Sweden
When to Go: May and June, after the snow has melted and when the Swedish countryside is bathing in bluets, poppies, and marguerite daises. The country also boasts 45 varietals of orchids. At this time of year, the sun above the country's northern half never really sets, offering more time to appreciate spring's beauty.

Where to See the Best Flowers: Lapland's Sarek National Park in northern Sweden is a wildflower hotspot accessible to more polished hikers. The island of Gotland (accessible by ferry from greater Stockholm) off Sweden's east coast is home to 35 of the country's 45 orchid varieties.

Photo Caption: Flowers growing along a path in Sarek National Park in Sweden 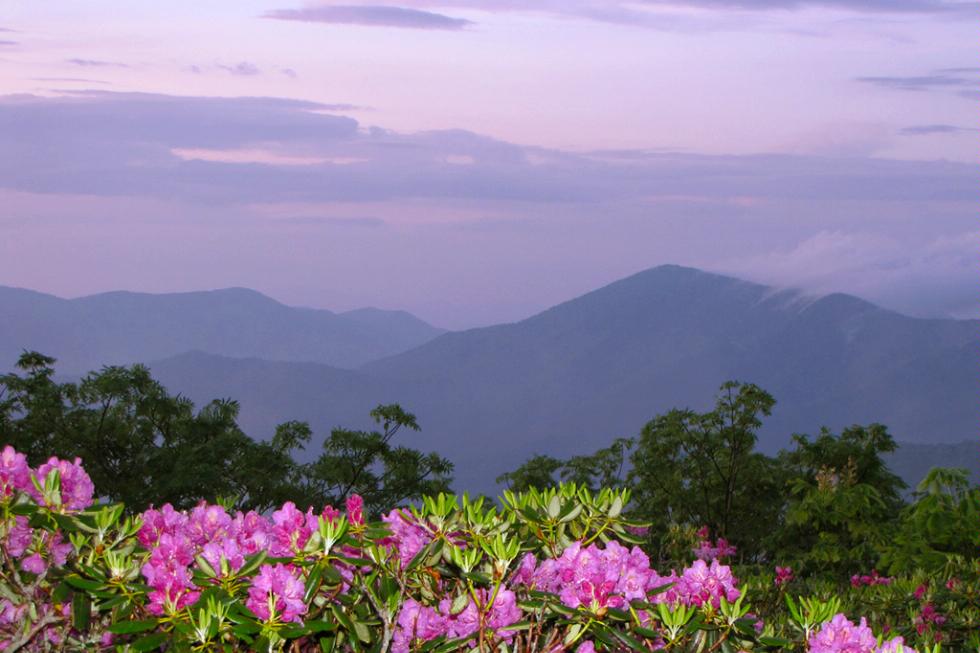 blueridgekitties
Rhododendrons in North Carolina
When to Go: Mid-June. Flowering white, pink purple blooms of native rhododendron cover the hillsides and line hiking trails (sometimes even forming colorful shrub tunnels) across the western part of North Carolina, specifically in the areas around Asheville.

Where to See the Best Flowers: Look for them on the slopes and summits of the Great Craggy Mountains, 14 miles northeast of Asheville. At 5,525 feet above water level, the area known as "Craggy Gardens" just off the Blue Ridge Parkway is awash with rhododendrons come June and July. A 1.4-mile hike leaving from the Craggy Gardens Visitor Center (BRP milepost 367) is the perfect way to explore. 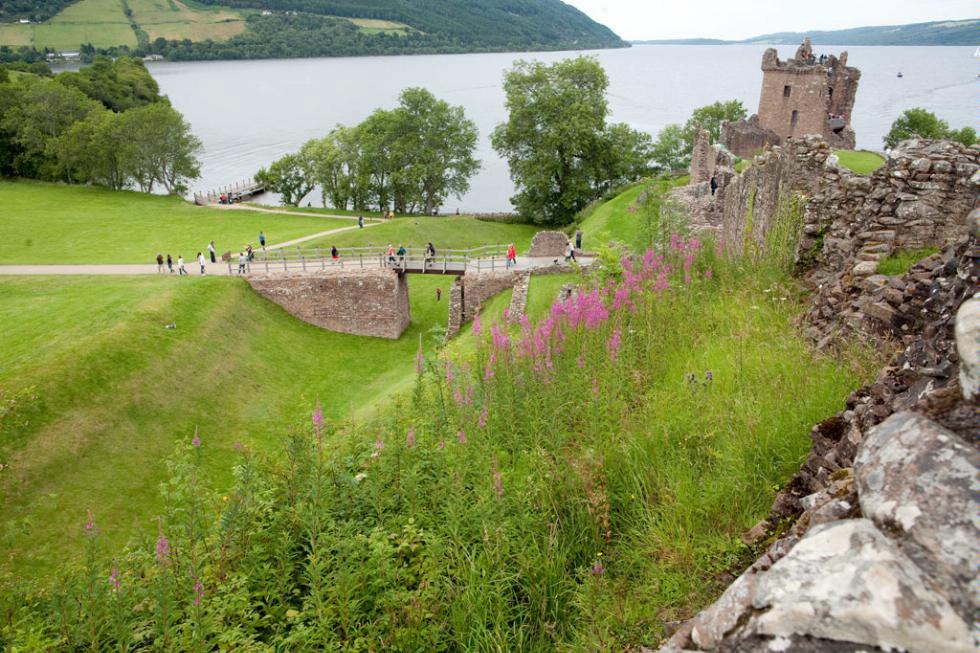 Thornton Cohen
Heather in Scotland
When to Go: July to September. While heather is not exclusive to Scotland, it's hard to think of one without the other. Come late summer or early fall, the Scottish Highlands are awash in soft lavender shades. You'll find heather growing throughout forests, across moors, and within bogs.

Where to See the Best Flowers: Heather is abundant throughout all of Scotland by August. Hotspots include the heather garden of Threave Castle in Dumfries and Galloway; Cairngorms National Park (heather moorland covers more than 41% of the park's landscape) in northeast Scotland; and the highroads around South Loch Ness. 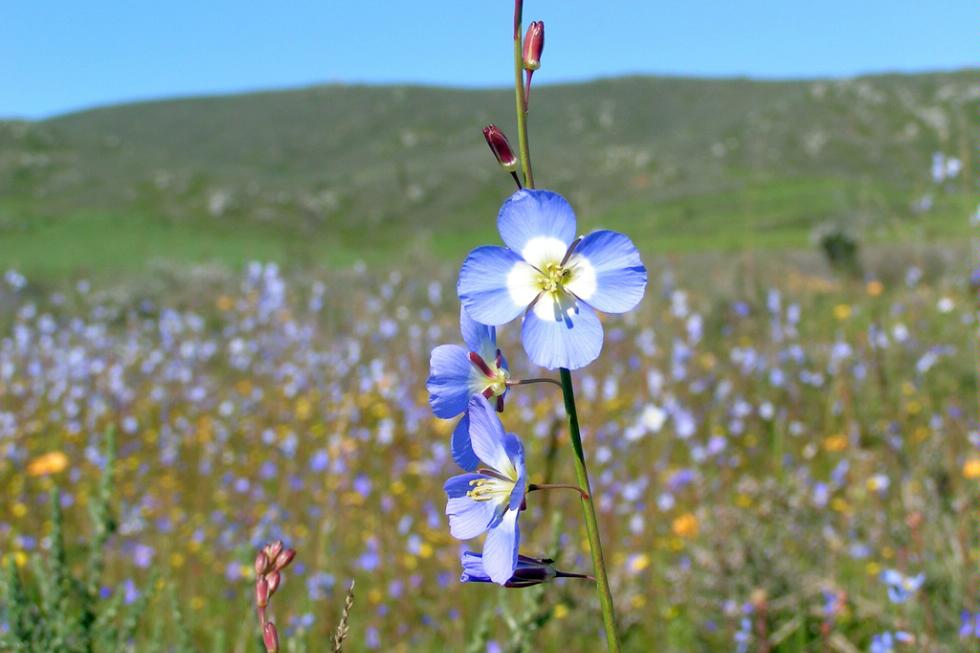 Apfel14
Wildflowers of South Africa
When to Go: July through October (the country's spring season). South Africa's semi-desert landscape springs to life with hues of purple, yellow, and orange, most notably during August and September.

Where to See the Best Flowers: About a five-hour drive north of Cape Town, Namaqualand is a wildflower paradise. Stop by the region's Goegap Nature Reserve, a great place to picnic among more than 600 indigenous plant species. Overnight accommodations are nearby. One hour west of Cape Town along the coast, you'll find the village of Darling, host to September's annual Darling Wildflower Show for nearly 100 years.

Photo Caption: Wildflowers in Darling on the Western Cape of South Africa
advertisement 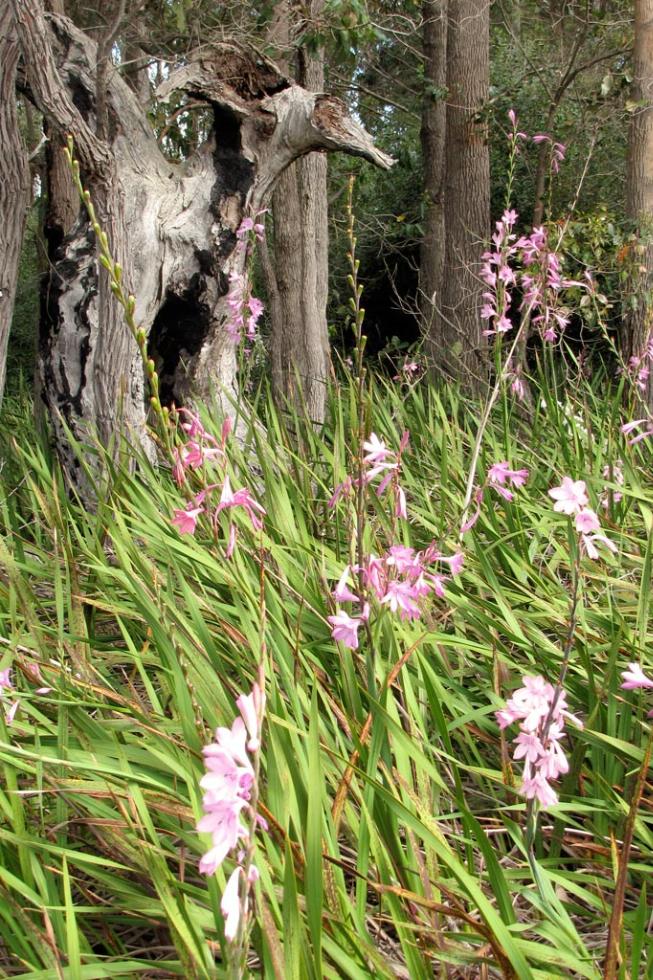 Tracey & Doug
Orchids in Western Australia
When to Go: September through November is prime viewing season, though blooms start as early as June. Orchids have adapted to Western Australia's hot dry summers (December through February) by staying dormant during the non-growing season and saving their nutrients to unveil themselves after autumn rains (typically around August). In September and October, more than 100 orchid varieties can be seen in the region over just a few days, including spider and pink fairy orchards, as well as native wildflowers like Australian Blue Bell, swamp bottlebrush, and cottonheads. In fact, Western Australia boasts more than 12,000 plant species, 60% of which are found nowhere else.

Where to See the Best Flowers: The town of Margaret River -- one of only 34 internationally recognized biodiversity hotspots worldwide -- features some 2,500 wildflower species. While the area has plenty of heritage and walking trails for visitors to explore on their own, guided wildflower tours are available through the Margaret River website (www.margaretriver.com) from September to November.