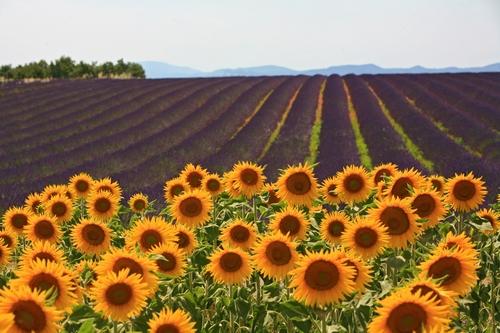 Best of Provence and the Cote d'Azur: 19 Favorite Moments

By Anna Brooke
From Provence's plush fields of lavender, Roman ruins, sundrenched olive groves, sloping vineyards, and medieval villages to the glamorous resorts, glitterati-clad beaches, gastronomic restaurants, and clear seas of the Côte d'Azur, this region has inspired generations of artists and continues to compel visitors from all over the world today. Here are 19 of my own favorite experiences in the South of France. 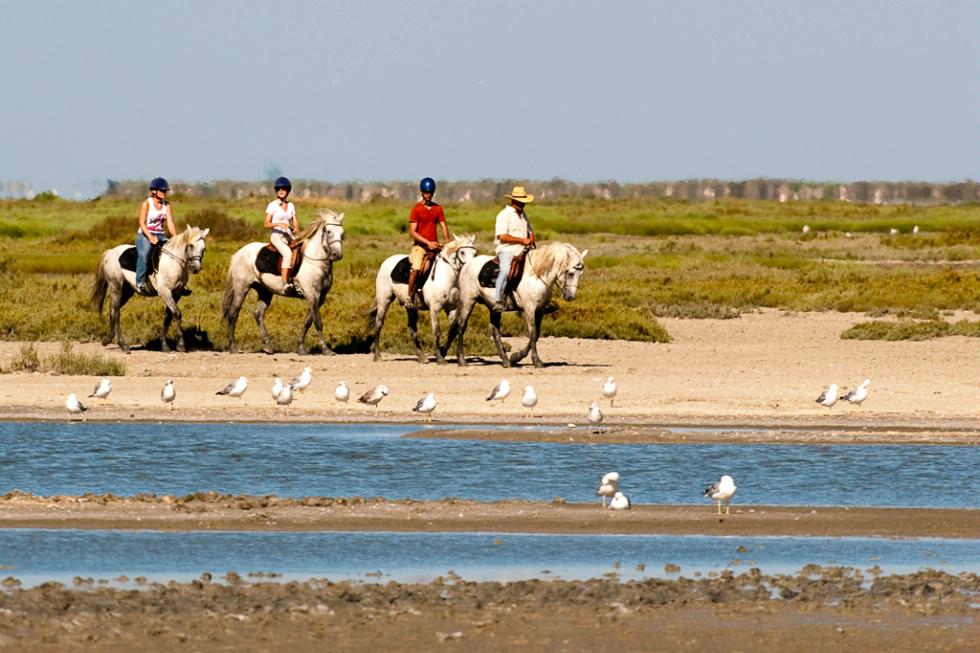 Kirsten Scully
Riding the White Horses of the Camargue Like a Cowboy
The desolate marshy flatlands of the Rhône Delta are home to pink flamingos, bulls, and white horses ridden by salty French cowboys, called gardians. Saddle up with La Bergerie de Maguelonne or Mas de Peint, where you'll discover a world of rare birds, salt lagoons, and sweeping panoramas unreachable by car.

Photo Caption: Horse-riding on the Camargue Wetlands in France. 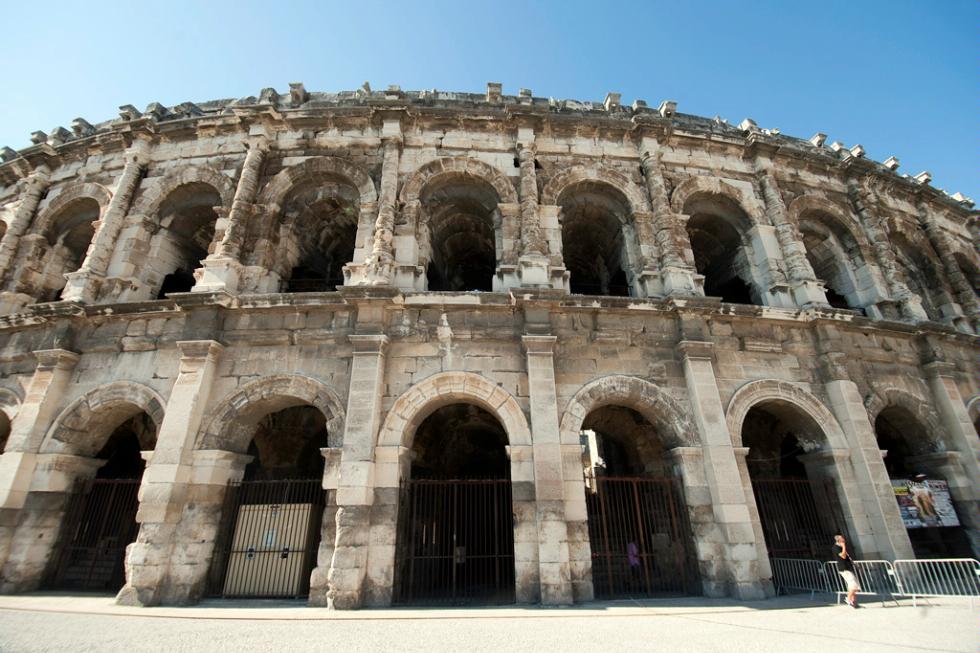 Kirsten Scully
Visiting the Roman Arena in Nîmes
Even if you've seen Roman Arles, you'll be bowled over by the grand fortitude of Nîmes' 1st-century Roman Amphitheater, a marvel of ancient civil engineering, that was built to stage bloodthirsty gladiatorial battles and chariot racing. 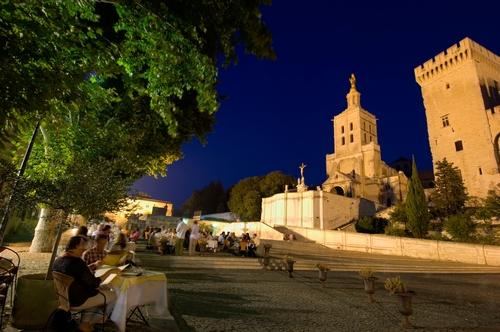 PCL
Ambling Through the Animated Streets of Avignon at Night
Pretty by day but even more striking by night, the former papal city comes into its own on a summer evening. Artsy cafe patrons flood the streets, and the air rings with lively conversation, lending even medieval alleyways a contemporary sophistication. 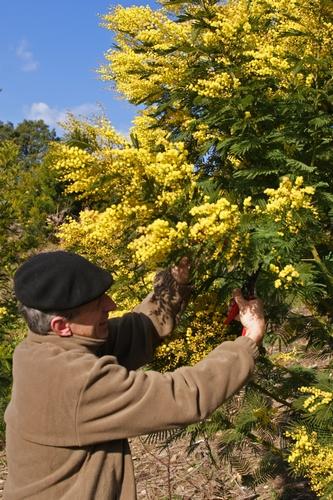 Matthieu Colin
Following the Mimosa Trail
Between January and March, the Côte d'Azur comes alive with sweetscented balls of yellow mimosa flowers. Follow the Mimosa Trail, a fabulous 130km (80 mile) path along the hilly back-lands between Bormes-les-Mimosas and Grasse, the capital of perfume, and watch the landscape bloom with the fragrant buds. 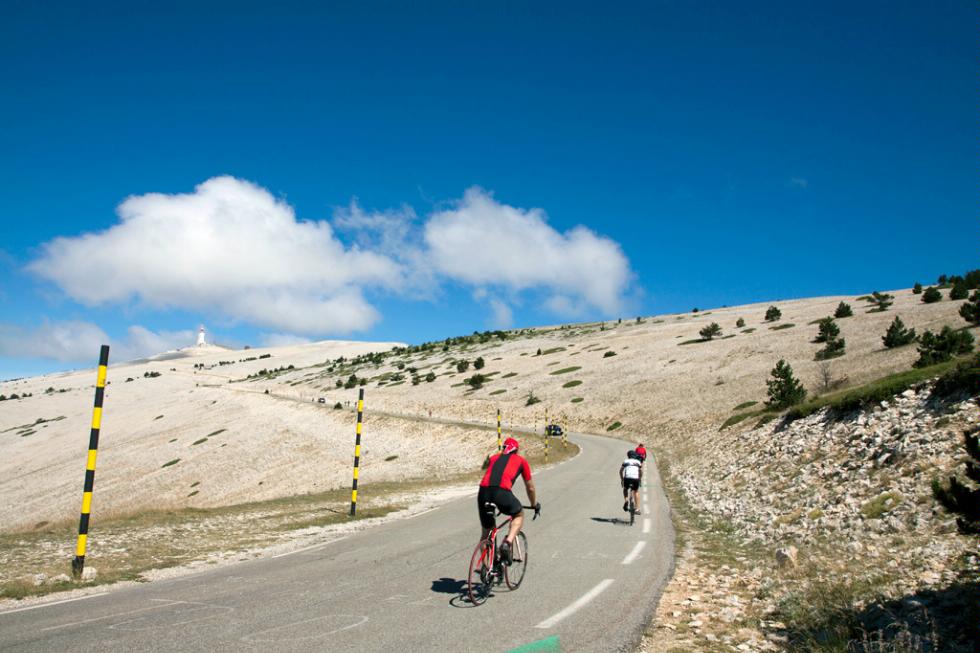 hansheijnen
Posing for a Photograph at the Summit of Mont Ventoux
Whether you attempt the steep 5-hour hike, struggle up on a bike, or (sensibly) drive 1,912m (2,084 yds.) to the top, the nor'easter that gusts over this dazzling white limestone cap will give you the ultimate windswept look.

Photo Caption: Biking to the Summit of Mont Ventoux in Vaucluse, France. 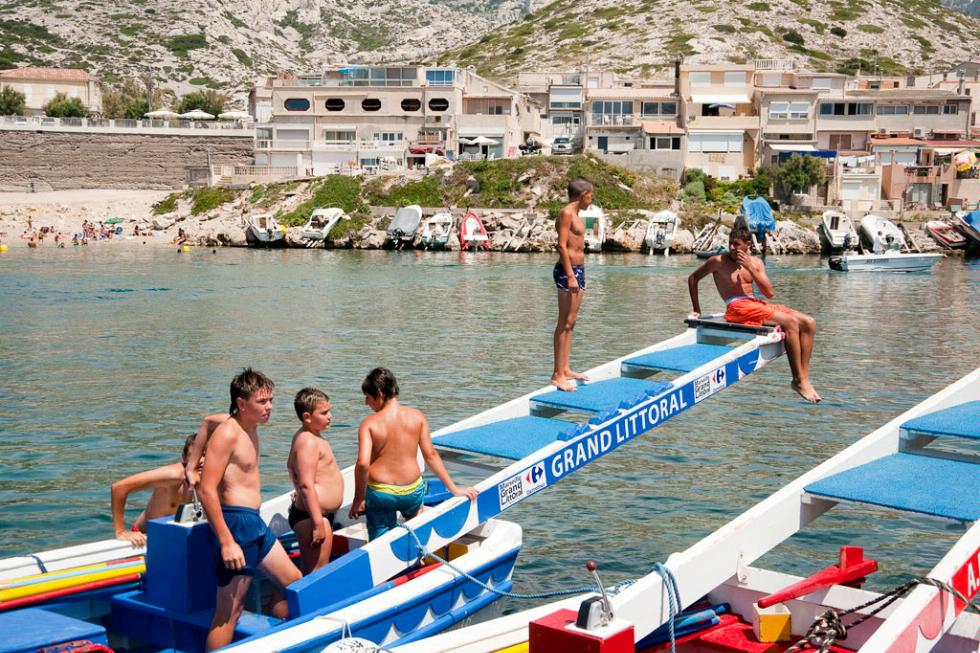 Kirsten Scully
Bathing in the Calanques
Explore the hidden splendor of creeks and beaches snuggled between the jagged, white cliffs between Marseille and Cassis. En-Vau, the prettiest calanque, is known for its sandy beach and needle-like rock formations. 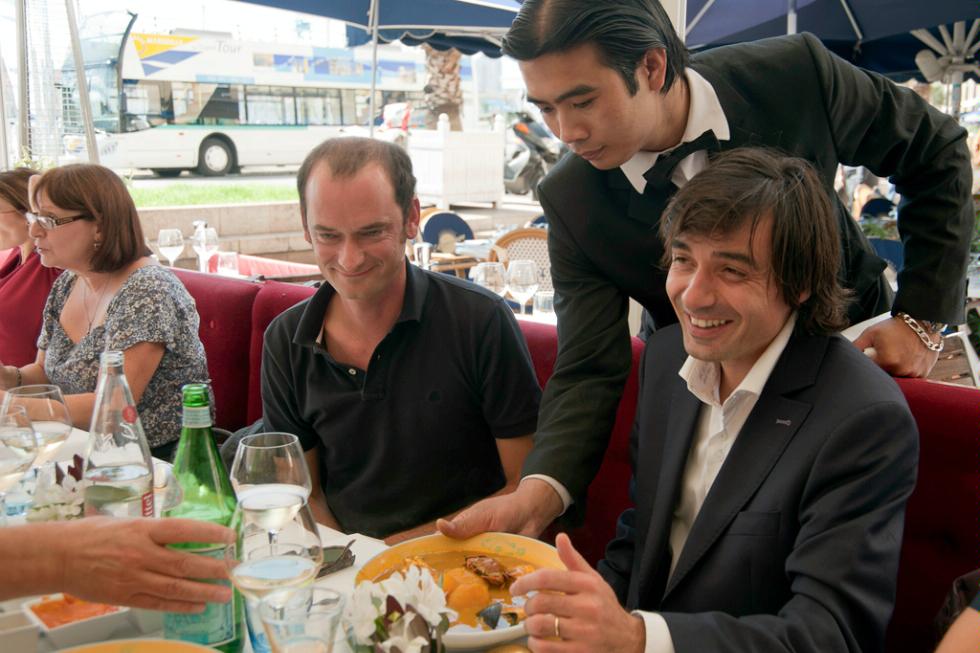 Kirsten Scully
Eating Bouillabaisse in Marseille's Miramar
As the light shimmers off the old port, grab a table on the sunny terrace at Miramar, order a crisp white wine, and wait for the bouillabaisse to arrive. This rich, ancient traditional recipe -- made from many kinds of impeccably fresh fish, saffron, and orange zest -- is reason alone to visit Marseille. 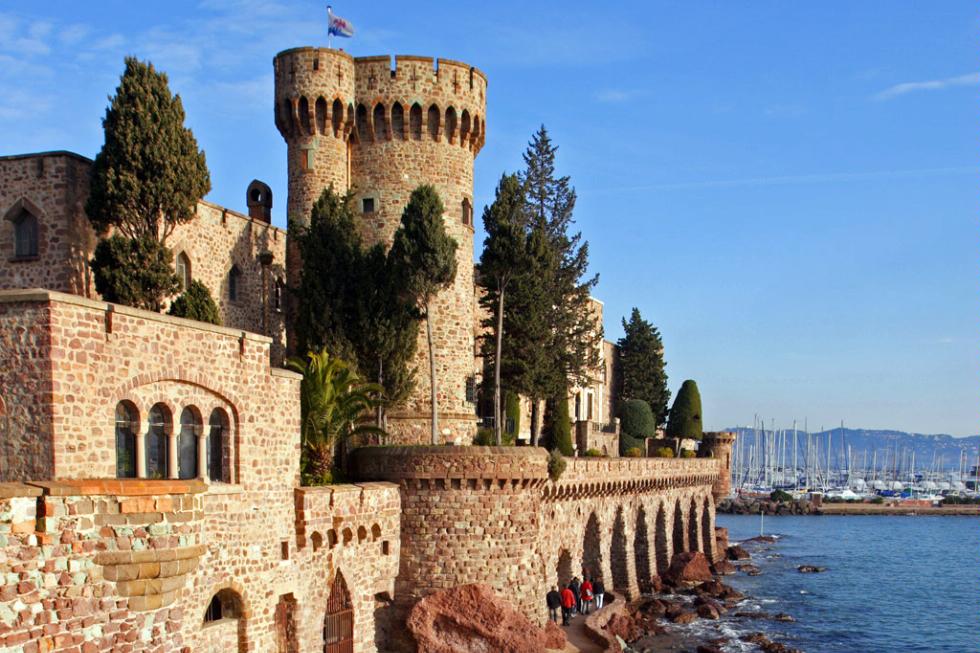 Matthieu Colin
Stealing Kisses at Château de la Napoule
There is something hopelessly romantic about Mandelieu's mock-gothic Château de la Napoule. Stroll through the topiary filled gardens and marvel at the fantastical sculptures, designed by American artists Marie and Henry Clews, who purchased the castle in 1918. Then steal a kiss on the turreted terraces overlooking the sea. 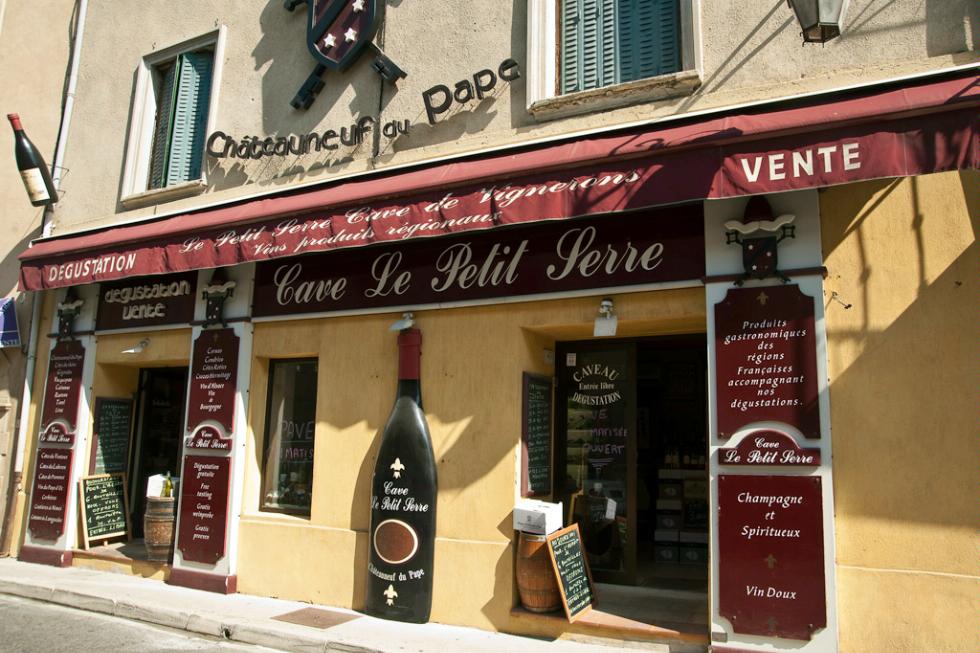 Kirsten Scully
Tasting Châteauneuf-du-Pape Wine
In the green vineyard-studded hills around Châteauneuf-du-Pape grow France's most famous product. When you're driving around the Vaucluse, don't hesitate to pop into one of the many châteaus whose Côte du Rhône wines are among the best in the country. 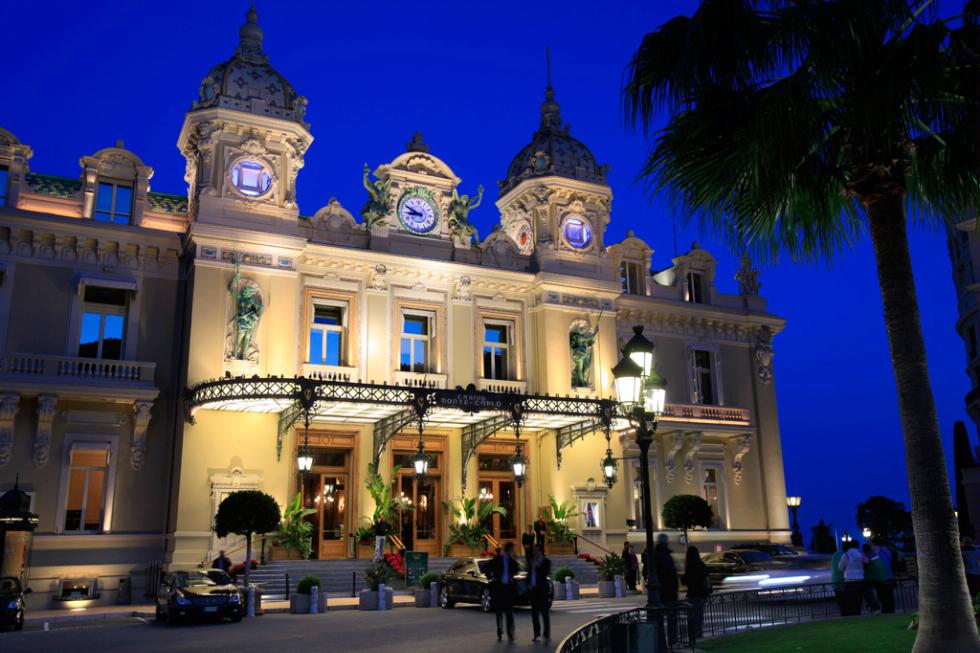 Matthieu Colin
Raising the Stakes at the Casino in Monte Carlo
You may not even mind losing money at this beautiful palace on the Riviera. Play blackjack in the opulent Salons Privés, roulette in the Belle Epoque Salons Européens, or sip champagne beneath the risqué frescos on the ceiling of the Rose Bar. 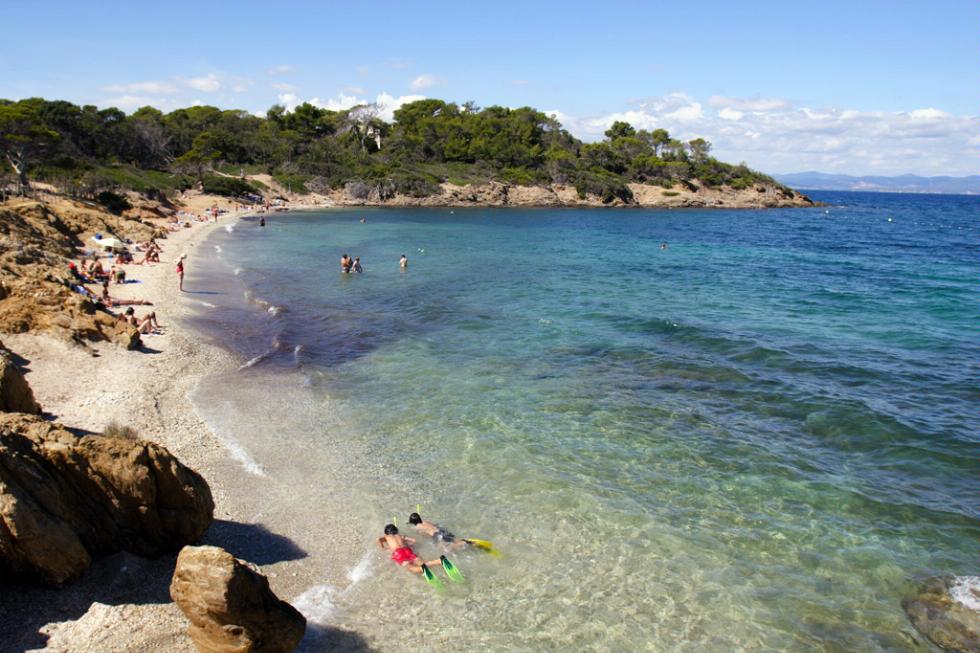 Matthieu Colin
Eating a Picnic Lunch on Porquerolles
The most paradisiacal of the Hyères islands, is a must for nature lovers, who will adore the expanses of pine forests, olive groves, vineyards, and glorious beaches. 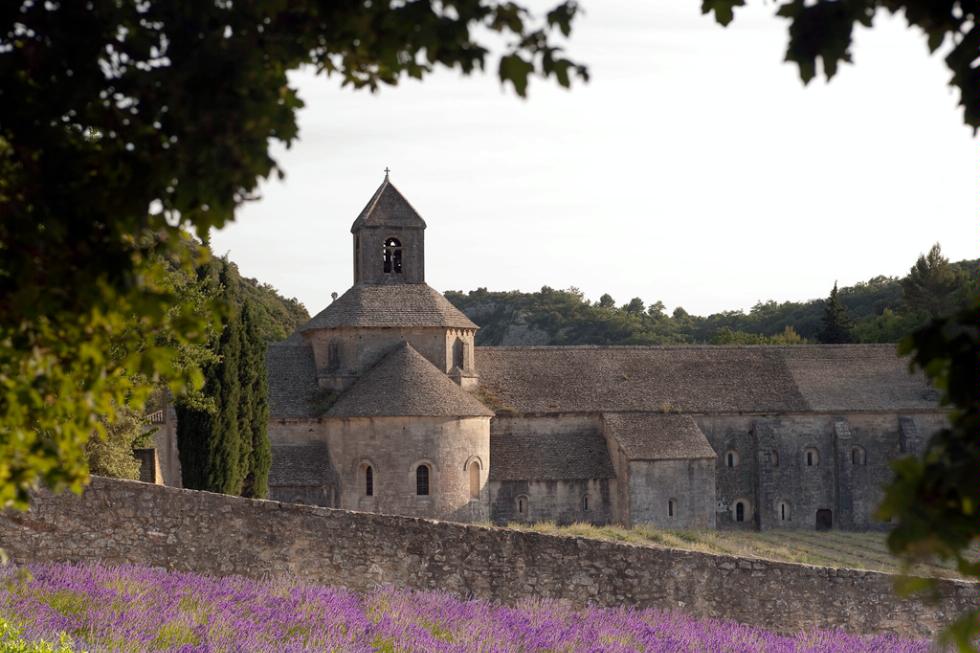 Kirsten Scully
Visiting the Abbaye de Sénanque in Bloom
Although possibly the most clichéd summer activity in Provence, that doesn't make the seas of lavender surrounding the 12th-century Cistercian monastery any less breathtaking, especially when approached from Gordes. 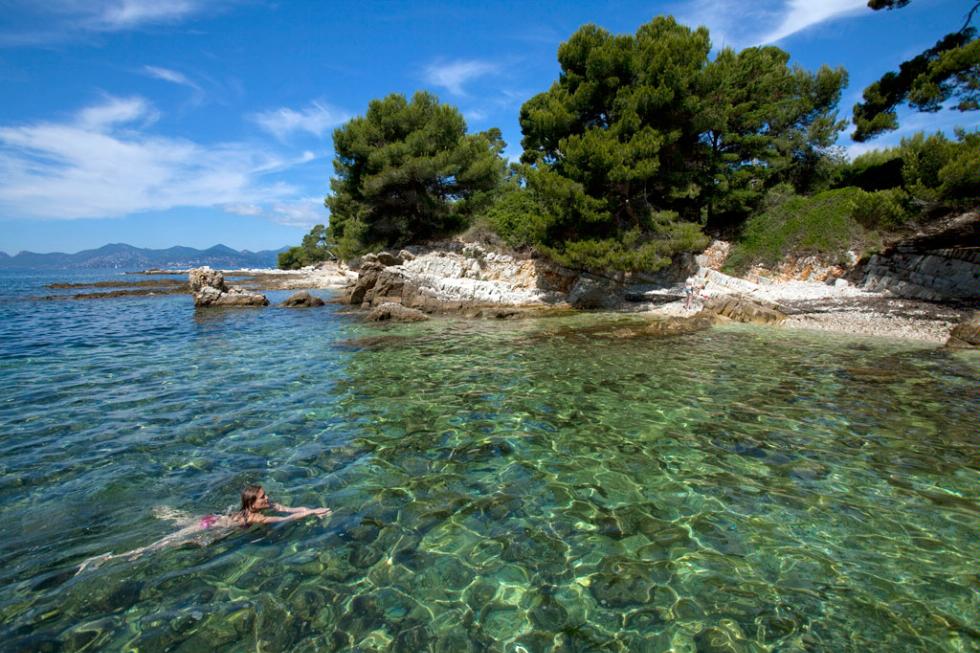 Matthieu Colin
Sunbathing on the St-Honorat Beaches
When bawdy mobs and jet-set frivolities get to be too much, take a boat from Cannes to the Îles de Lérins, a scenic islet owned by Cistercian monks, whose peaceful outcrops and beaches are a perfect antidote to crowd fever. 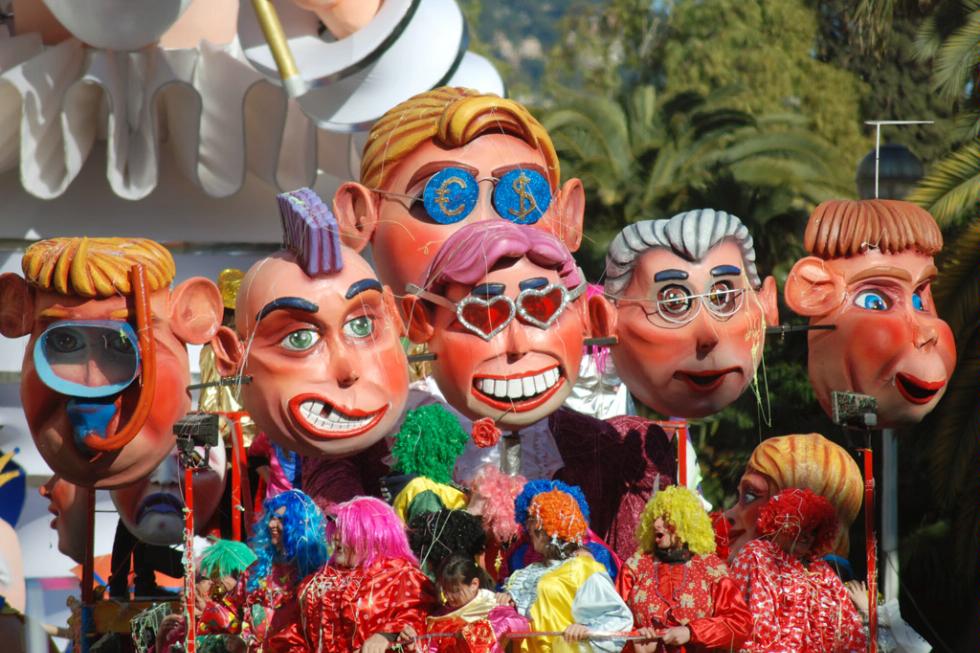 tfoto
Attending Nice's Annual Carnival
What began in the Middle Ages as a masked pre-Lenten street party has turned into an explosive weeklong extravaganza, with giant puppets, oversized head-masks, flowers, and bright costumes - the most colorful festival in the South of France. After the parades, heavy partying ensues (late Feb-Mar).

Matthieu Colin
Basking in the Glory of Rome
In the bougainvillea-scented village of La Turbie, the gigantic troph&eacut;e des Alpes was erected to celebrate Emperor Augustus's victory against the Ligurians in 13 B.C. It used to mark the frontier between Italy and Gaul, and it still affords triumphant views over Cap Ferrat and Eze. 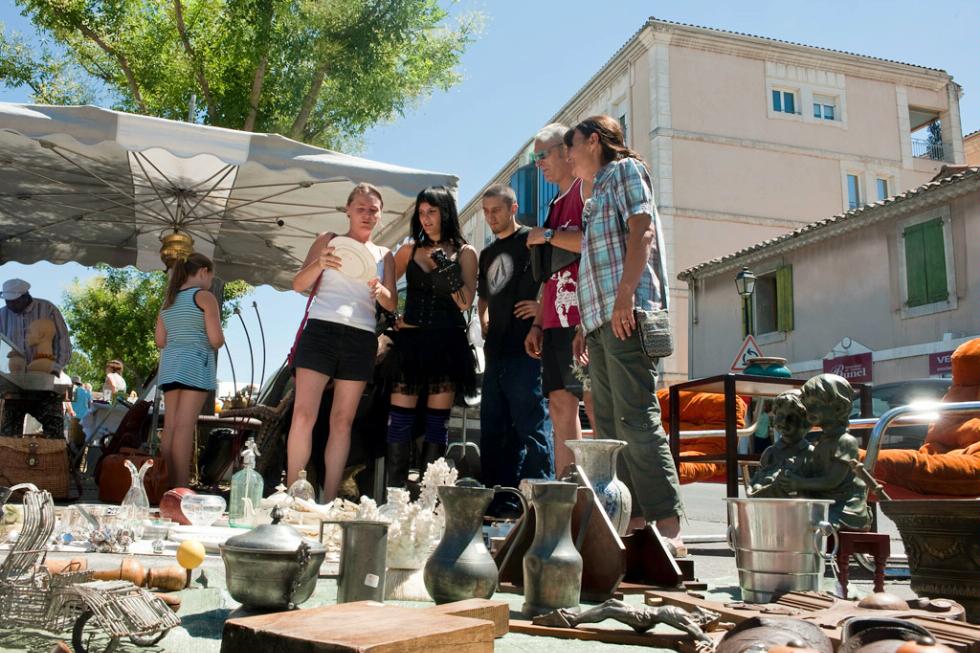 Kirsten Scully
Sifting Through Antiques in L'Isle-sur-la-Sorgue
Whether you covet an original Louis XIV chair, or seek a 1920s reproduction of an 18th-century bed, or just fancy perusing other people's junk in search of hidden treasure, pretty L'Isle-sur-la-Sorgue, with its crystalline river and old waterwheels, is a paradise for antiques lovers of every stripe. 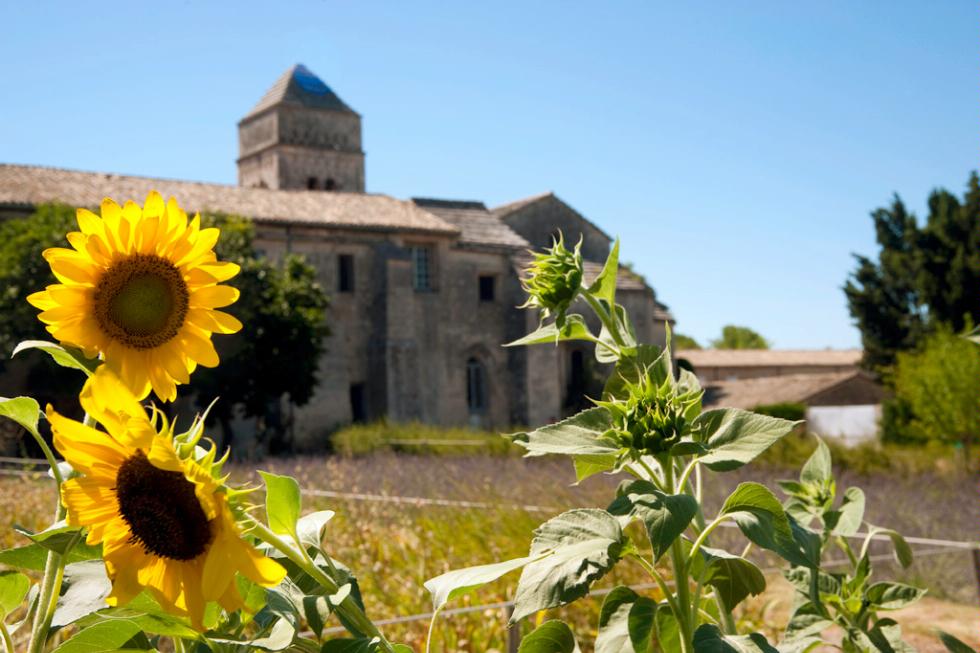 Kirsten Scully
Experiencing the Haunting Tranquillity of the St-Paul de Mausole Monastery
Vincent van Gogh committed himself here after lopping off his ear in Arles. The tormented artist whiled away many an hour, silently painting the medieval cloisters and monastery gardens. A series of illustrated panels shows his works on the sites where he painted them. For fans, it is a moving experience.

Photo Caption: The gardens at St-Paul-de-Mausolée in France. 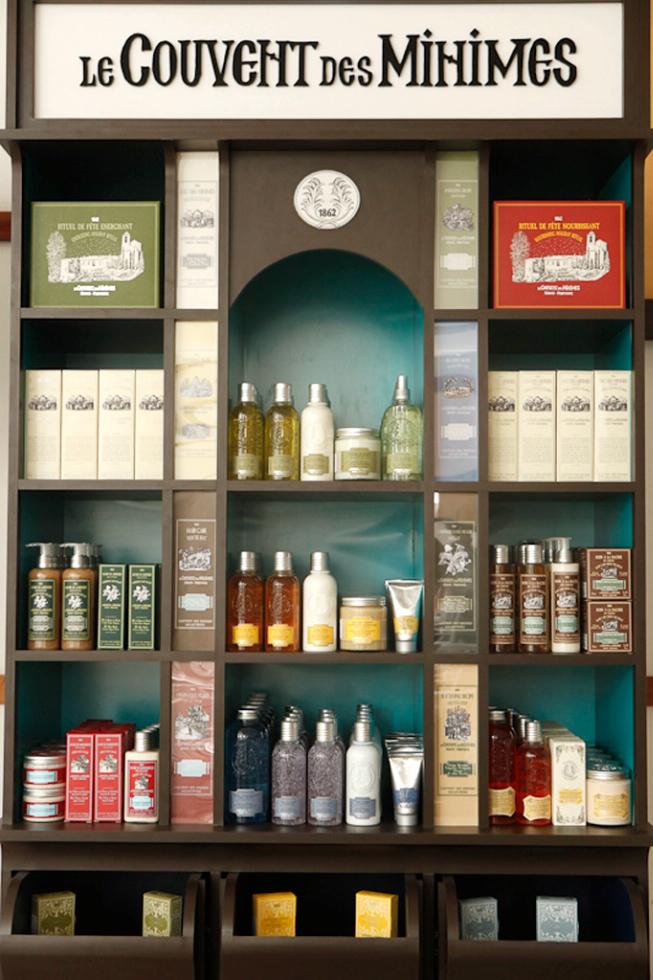 imprensagpa
Recharging Body and Mind at le Couvent des Minimes
As the sun sets over the Haute-Provence hills, let the Couvent des Minimes knead away your tensions in the spa (the only one in France to use Provençal Occitane products). Later, dine on fine Mediterranean cuisine in the hotel restaurant. You may never want to leave! 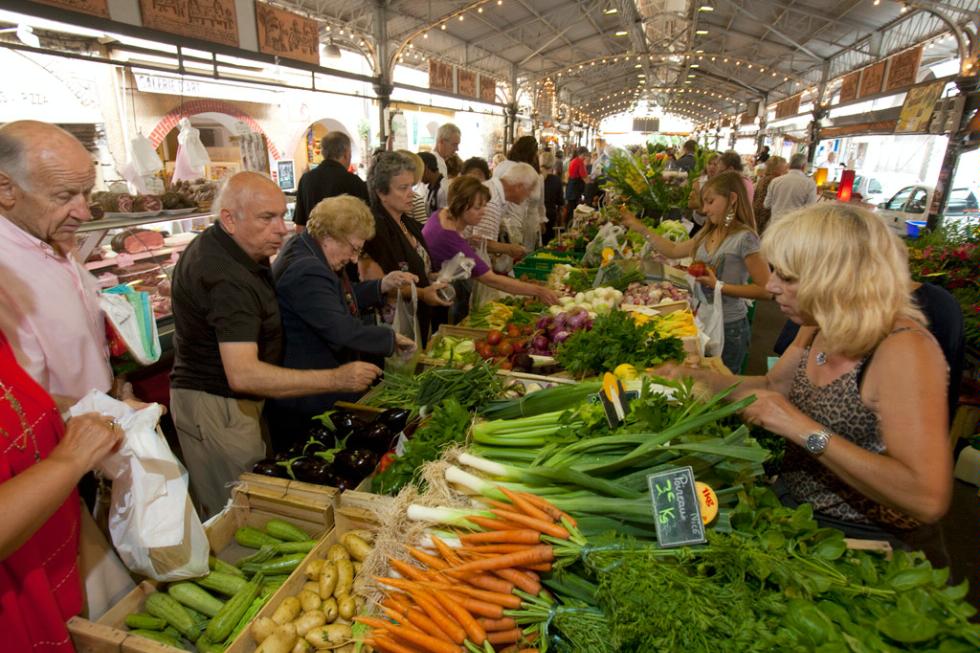 Matthieu Colin
Filling up at Antibes' Provençal Market
Colorful, bustling, and bursting at the seams with delicious produce, charcuterie, and cheeses, Antibes' covered market makes a plum spot to stock a picnic basket.