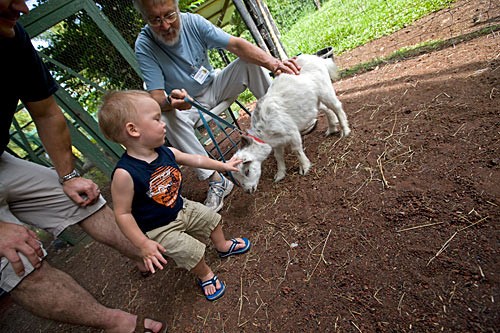 Best of Hawaii the Big Island with Kids

By Frommer's Staff
If you are traveling with keiki (children) in tow, you might want to take in a handful of these sites which emphasizes things for the kids -- such as playing on the beach and seeing a real live volcano. If you follow the points of interest in order they will take you from Kailua-Kona to the volcano to Hilo, and then back to Kona.

Photo Caption: Panaewa Rainforest Zoo is a favorite destination for families, with 50 species represented in a beautiful, natural setting. 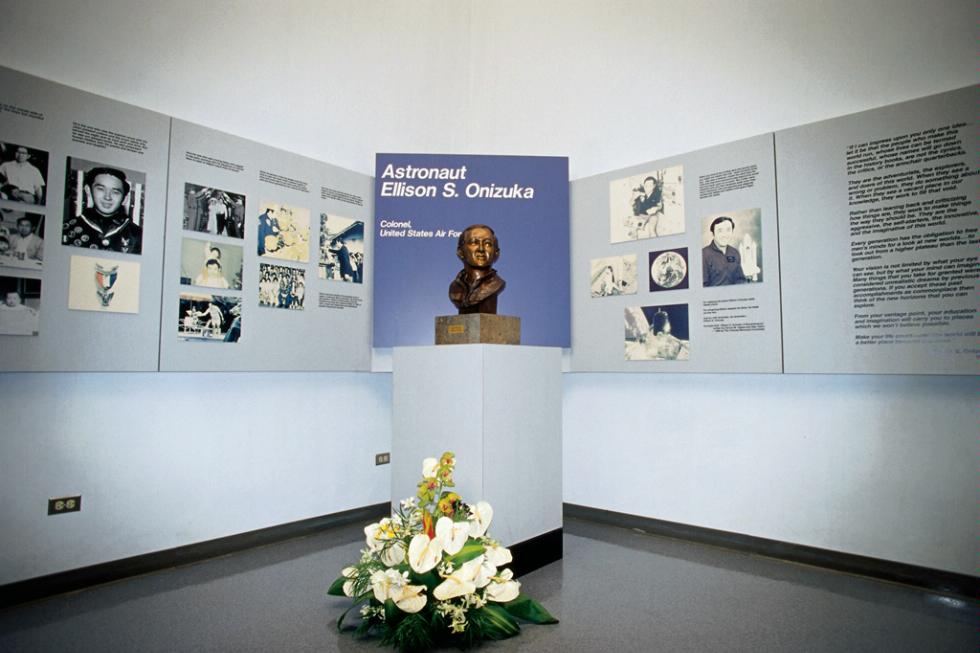 Kirk Lee Aeder/The Hawaii Tourism Authority
Ellison S. Onizuka Space Center
You've finally arrived on the Big Island after a very long trip. The kids are antsy. If you have a spare adult in the group, have one person wait for the luggage and the other take the kids over to this center, located at the Kona Airport. Kids can check out a real moon rock and launch their very own miniature space shuttles until your bags turn up. 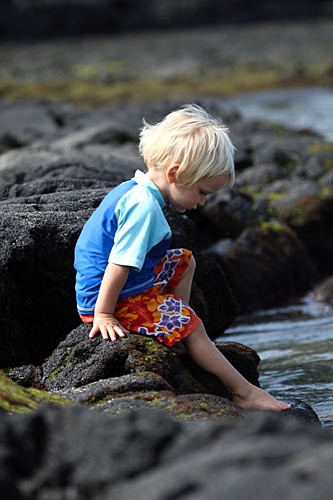 Bruce Omori
Kahaluu Beach Park
This is the most popular beach on the Kona Coast and perfect for kids because the outlying reef-protected lagoons knock down most waves and make the inshore waters very calm. Coconut trees line a narrow salt-and-pepper beach cove surrounded by partially submerged rocks. The rocks prevent intense waves from entering the cove, but allow gentler ones to flow freely, bringing in nutrients that support its large fish population, which will definitely excite any curious child. 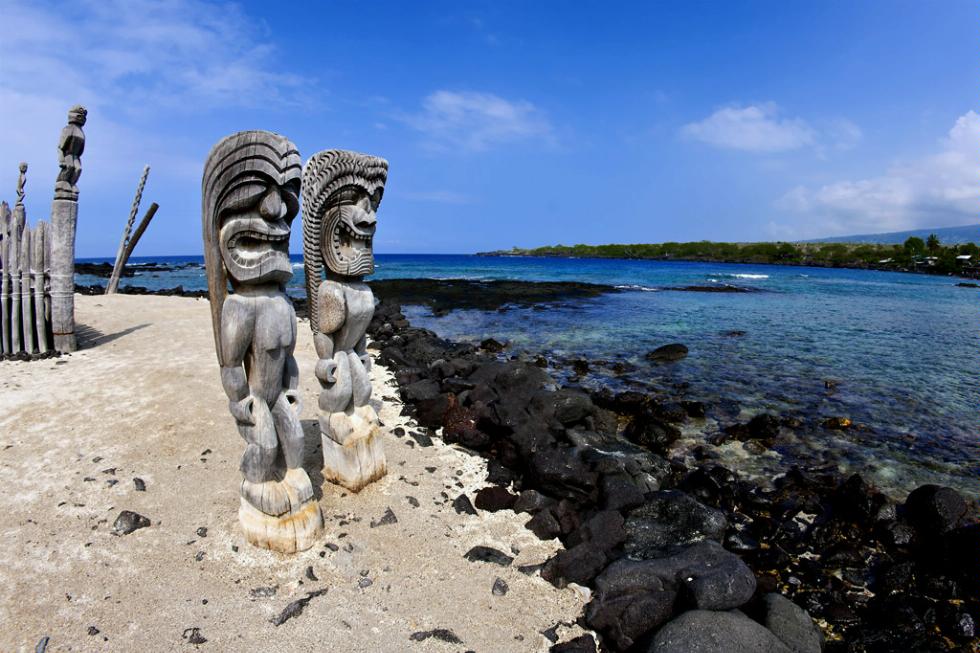 Kevin Panizza
Puuhonua O Honaunau National Historical Park
Kids will love this ancient "City of Refuge," with its fierce, haunting idols, displays of ancient Hawaii, and a great rock wall -- 1,000 feet long, 10 feet high, and 17 feet thick. If they get bored, there's a great beach behind the display with tide pools they can play in. 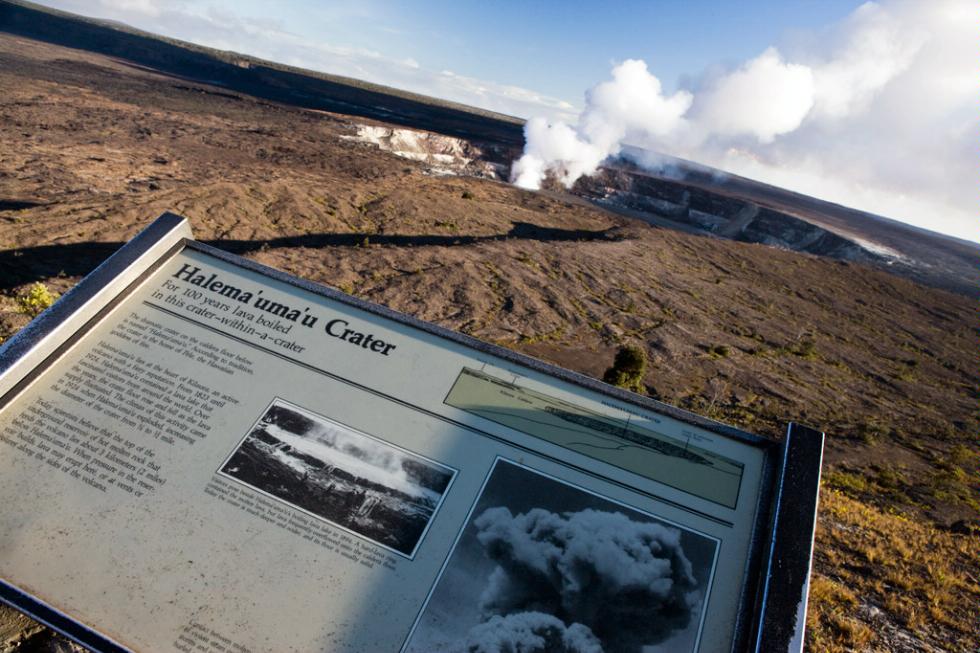 Bruce Omori
Hawaii Volcanoes National Park
Yellowstone, Yosemite, and other national parks are spectacular, no doubt about it. But in my opinion, they're all ho-hum compared to this one: Here nothing less than the miracle of creation is the daily attraction.

Hawaii Volcanoes has the only rainforest in the U.S. National Park system -- and it's the only park that's home to an active volcano. Most people drive through the park (it has 50 miles of good roads, some of them often covered by lava flows) and call it a day. But it takes at least 3 days to explore the whole park, including such oddities as Halemaumau Crater, a still-fuming pit of steam and sulfur; the intestinal-looking Thurston Lava Tube; Devastation Trail, a short hike through a desolated area destroyed by lava; and, finally, the end of Chain of Craters Road, where lava regularly spills across the man-made two-lane blacktop to create its own red-hot freeway to the sea. In addition to some of the world's weirdest landscapes, the park has hiking trails, rain forests, campgrounds, a historic old hotel on the crater's rim, and that spectacular, still-erupting volcano. 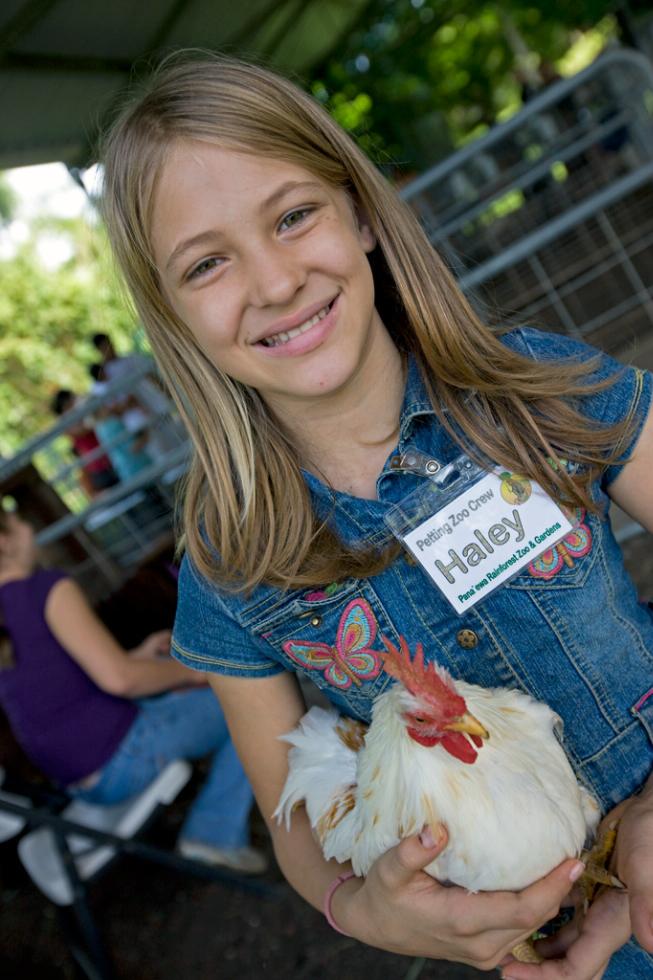 Claire Dibble
Panaewa Rainforest Zoo
This 12-acre zoo, nestled in the heart of the Panaewa Forest Reserve south of Hilo, is the only outdoor rainforest zoo in the United States. Some 50 species of animals from rainforests around the globe call Panaewa home -- including several endangered Hawaiian birds. All of them are exhibited in a natural setting. This is one of the few zoos where you can observe Sumatran tigers, Brazilian tapirs, and the rare pygmy hippopotamus, an endangered "minihippo" found in western Africa.

Please note that the zoo closed in 2021 for renovations to make it ADA compliant. Do call before heading over to make sure that it has reopened. 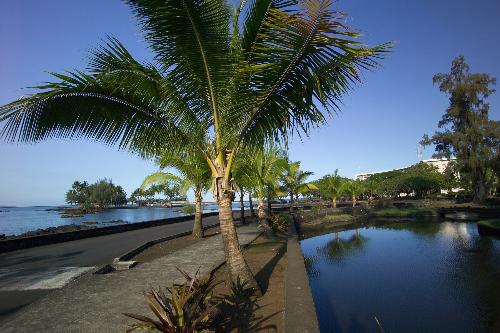 The Big Island Visitors Bureau
Coconut Island
The kids will love exploring this tiny island while you enjoy one of the best views of Mauna Kea. This island, which the Hawaiians called Mokuola, is the site of an ancient legend. The famous demigod, Maui, lived in Hilo and was quite the fisherman. His secret was a magical canoe and magical fishhook. One day, Maui thought about all the time he spent going to the other islands to fish. If he could join all the Hawaiian Islands into one big island, he could really save time fishing. So Maui gathered all the Hawaiian chiefs and told them about his plan. They all agreed to help.

Maui cautioned the chiefs that when they were helping him pull the islands together, no matter what, they absolutely could not look back until the islands were completely joined. The chiefs all agreed, and that night they set out to join the Big Island to its neighbor, Maui. Maui the demigod fastened his magical fishhook onto Maui the island, and the chiefs pulled with all their might. They began to feel the island moving, but one chief just had to peek and see how close the islands were. The spell was broken and the island of Maui disappeared. All that remained was a small piece of the island where the demigod's fishhook remained. And that is how a piece of Maui, now called Mokuola, is in Hilo Bay. 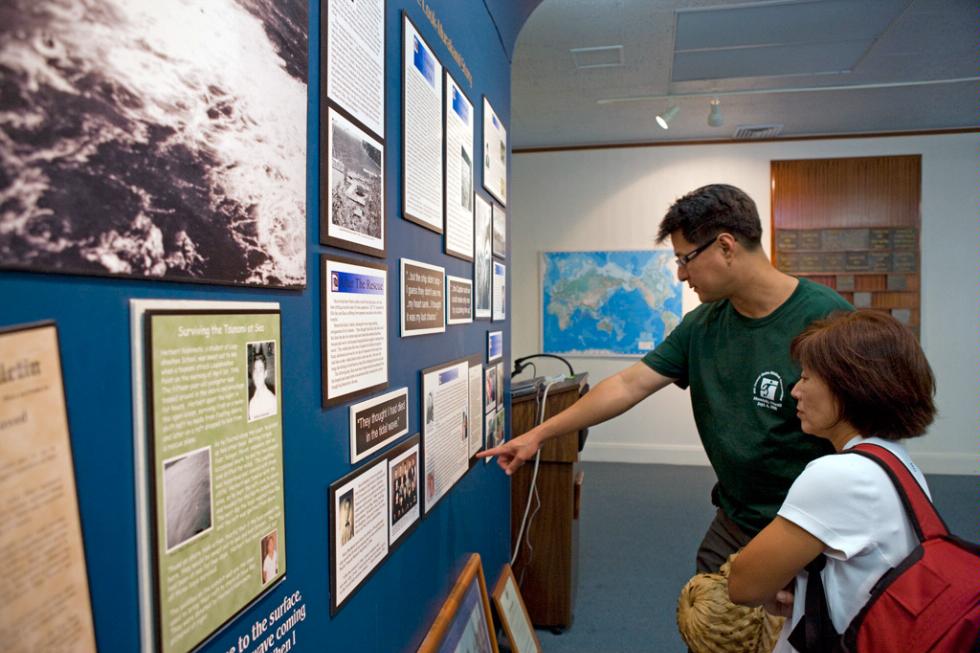 Bruce Omori
Pacific Tsunami Museum
Even more interesting than the exhibits here are the volunteers who survived Hawaii's most deadly "walls of water" in 1946 and 1960, both of which reshaped the town of Hilo. Visitors can listen to their stories of terror and view a range of exhibits, from interactive computers to a children's section to a display on what happens when a local earthquake triggers a seismic wave, as it did in 1975 during the Big Island's last tsunami. 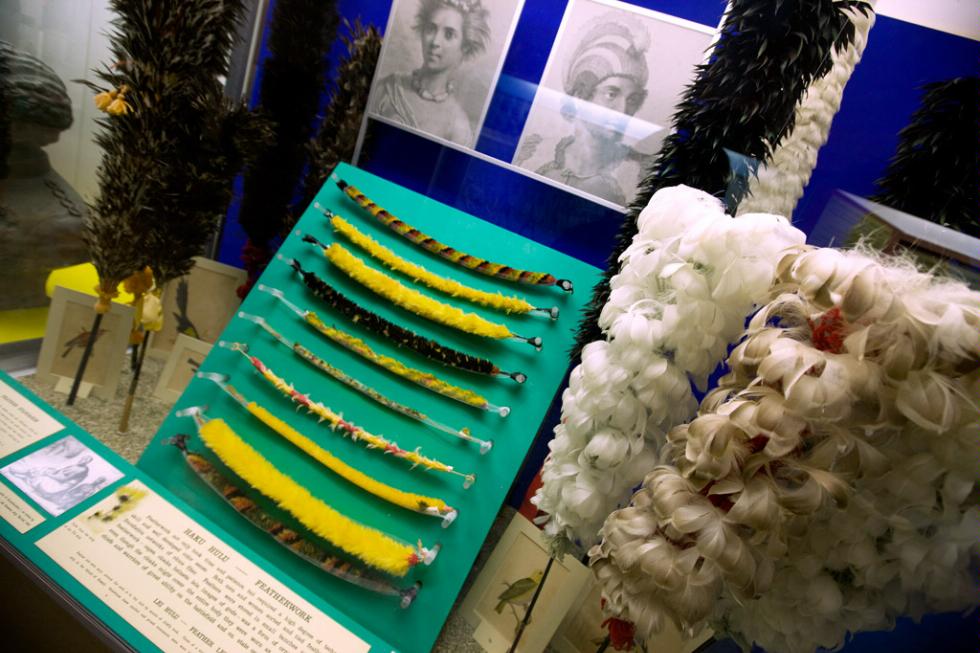 Bruce Omori
Lyman Museum & Mission House
The oldest wood-frame house on the island was built in 1839 by David and Sarah Lyman, a missionary couple who arrived from New England in 1832. The structure combines New England and Hawaiian architectural styles, and is built of hand-hewn koa planks and native timbers. Here the Lymans received such guests as Mark Twain and Hawaii's monarchs. The well-preserved house is the best example of missionary life and times in Hawaii. You'll find lots of artifacts from the 19th-century, including furniture and clothing from the Lymans. The Mission House is shown by guided tour.

The Lyman Museum houses two major exhibit galleries. The Earth Heritage Gallery focuses on the natural history of the islands, with geology and volcanology exhibits, a mineral rock collection that's rated one of the best in the country, and a section on local flora and fauna. The Island Heritage Gallery features displays on Hawaiian culture, including a replica of a grass hale (house), as well as on other cultures transplanted to Hawaii's shores. 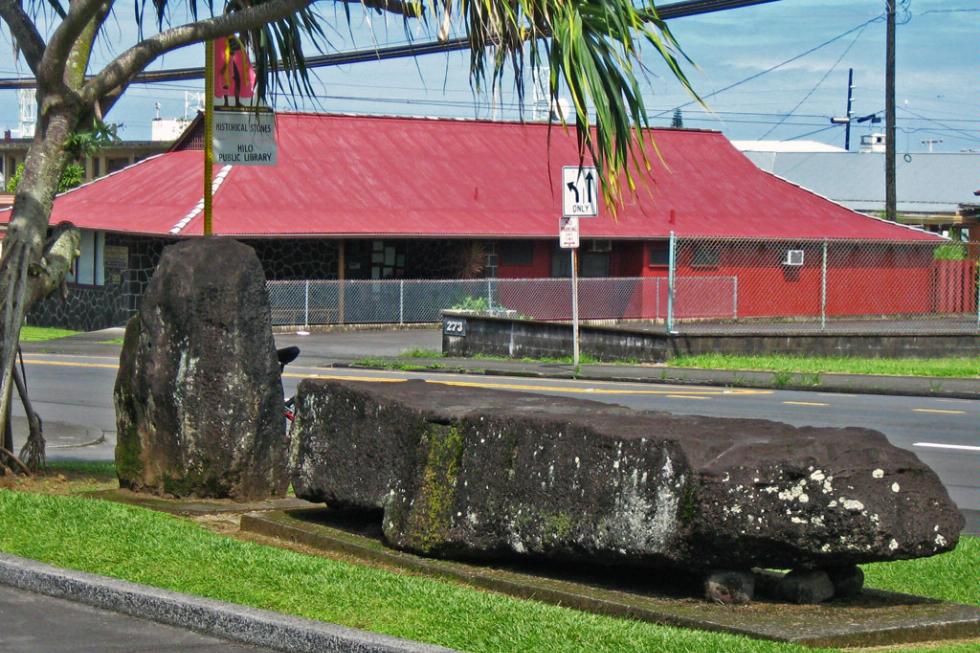 W Nowicki
Naha Stone
While it may look like just an old rock, the Naha Stone has a mystical backstory fascinating to kids (and adults) of all ages. This 2K-ton stone was used as a test of royal strength: Ancient legend said that whoever could move the stone would conquer and unite the islands. As a 14-year-old boy, King Kamehameha the Great moved the stone -- and later fulfilled his destiny. The Pinao Stone, next to it, once guarded an ancient temple.

Photo Caption: The Naha Stone is said to have been moved by King Kamehameha I to demonstrate his strength. It sits outside the Hilo Public Library.
Arts and Culture
Beach & Water Sports
Family & Kids
Local Experiences