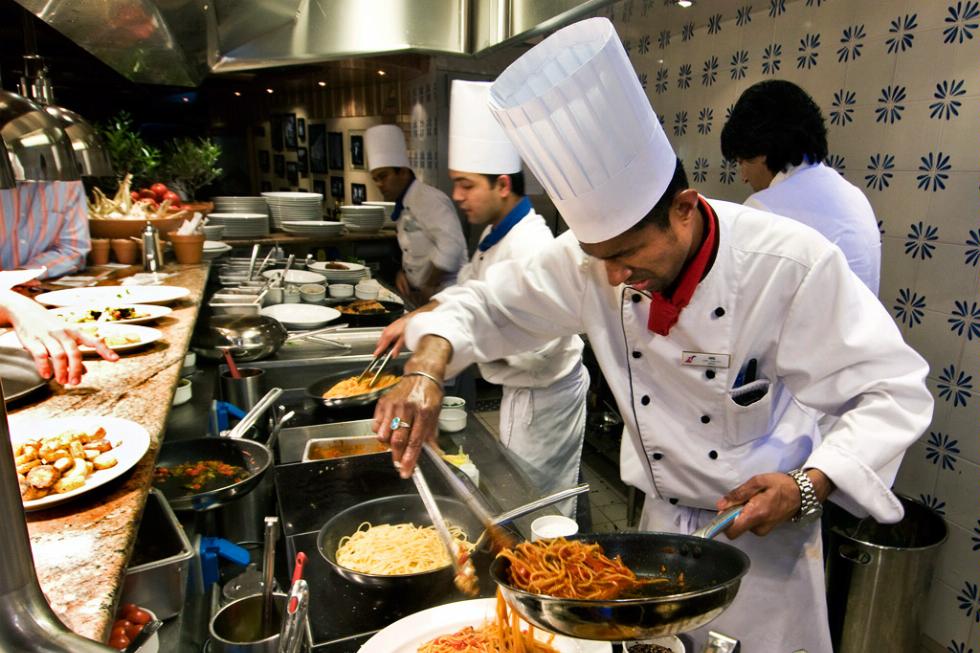 By
Best Specialty Restaurants at Sea
By Lisa Cheng

Specialty restaurants aboard cruise ships have become an industry standard -- and a tempting alternative to buffets. Top-quality meats, candle-lit settings, and fine china are nice, but are these alternative dining options worth the additional cover charges?

We compared shipboard culinary options to their land-based counterparts, and came up with a solid answer: At sea, you can enjoy some of the best dining experiences for less. Here are 10 specialty restaurants that you won't want to miss. 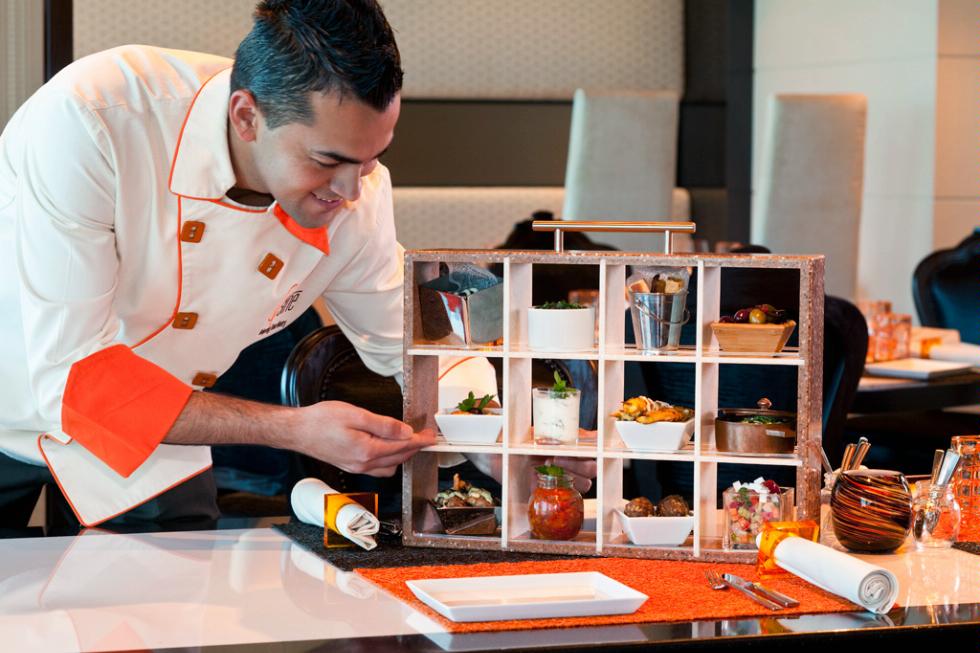 What You Can Sample: Tapas, including Indian, Mediterranean, and Asian cuisine: baby back rib spring rolls, Black Angus sirloin tacos, meatballs three ways (Kobe with cheddar and marinara sauce, veal with mushrooms and marsala, turkey with cranberry and sage gravy), and lobster and escargot fritters

The Experience: Aroma, presentation, texture, taste -- Qsine was designed to engage the senses. An interactive experience from the get-go (touch your order on the iPad menu), the restaurant puts "culinary tour guides" at your disposal, who advise on the "palate pleasers" and portions. Expect whimsy (the dessert menu comes in the form of an unfolding cube), surprise (that crunch in the sushi rolls isn't tempura, it's … Doritos) and plenty of DIY (mash your own guacamole, frost your own cupcakes).

How Much: $40 per person for unlimited tapas

Why It's Worth the Splurge: Dinner for two at a classic tapas restaurant ranges anywhere from $60-$125 (or $30-$62.50 per person, depending on the size of your appetite), but you won't find Qsine's unique twists to small plates elsewhere. 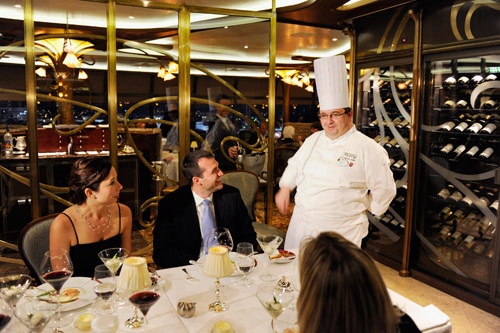 What You Can Sample: An eight- or nine-course meal may include langoustines with apple and ginger; cod with red beans, girolle mushrooms, and a chili sauce; Kurobuta pork with a corn ragout; and veal tenderloin with a tomato jam

The Experience: You'll feel as if you've stepped out of a scene of Ratatouille (sans toque-topped rodent) in an Art Nouveau hall with burgundy and gold accents. Before seating, the house sommelier will whisk you to the glass-walled wine vault for a tasting; upon exit, ladies get the gift of a rose while all guests receive a box of chocolates, a fitting ending for a journey in haute gastronomy.

How Much: $75 per person for an eight- or nine-course meal; $99 with French wine pairings

Why It's Worth the Splurge: A six-course meal in the co-chef's two-star Michelin restaurant would cost $210 per person -- that's $135 more 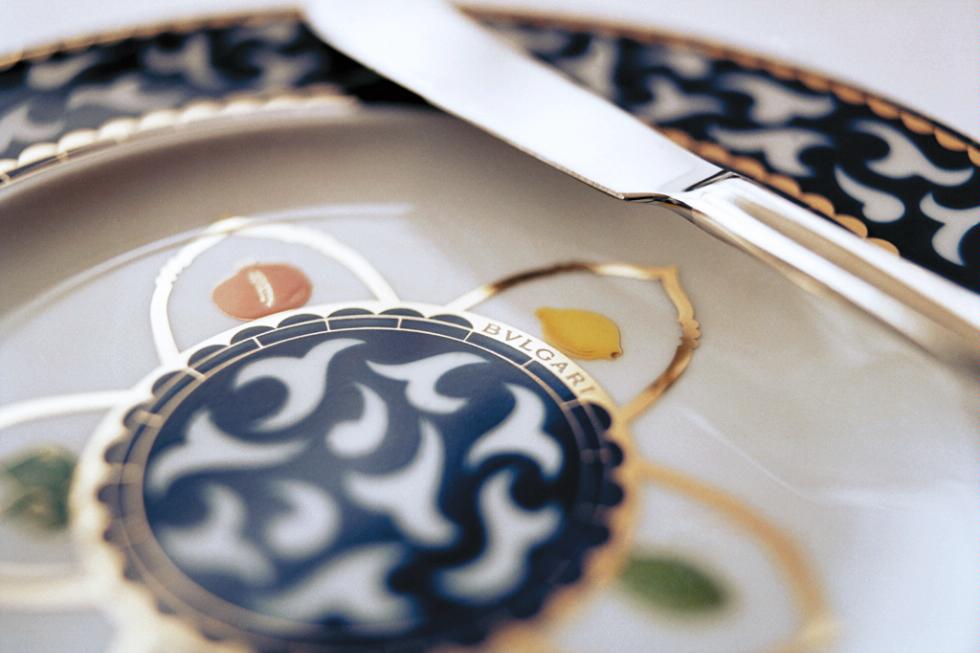 What You Can Sample: A four-course meal of Dungeness crab cakes, lobster macaroni and cheese, beef tenderloin with mushrooms and Cognac, and a Grand Marnier chocolate volcano

The Experience: A classic steakhouse with a white-jacketed staff, this intimate, elegant venue is where cruisers go to escape the buffet lines. Décor varies by ship (we love MS Oosterdam's lighted mural of Dutch Masters, sculpted-glass lighting, and cast aluminum chairs), but you'll find classy details, such as the Riedel stemware and Bvlgari china, on every ship.

How Much: $25 per person for dinner

Why It's Worth the Splurge: A comparable four-course dinner at a restaurant on shore would cost around $75 per person -- or $50 more. 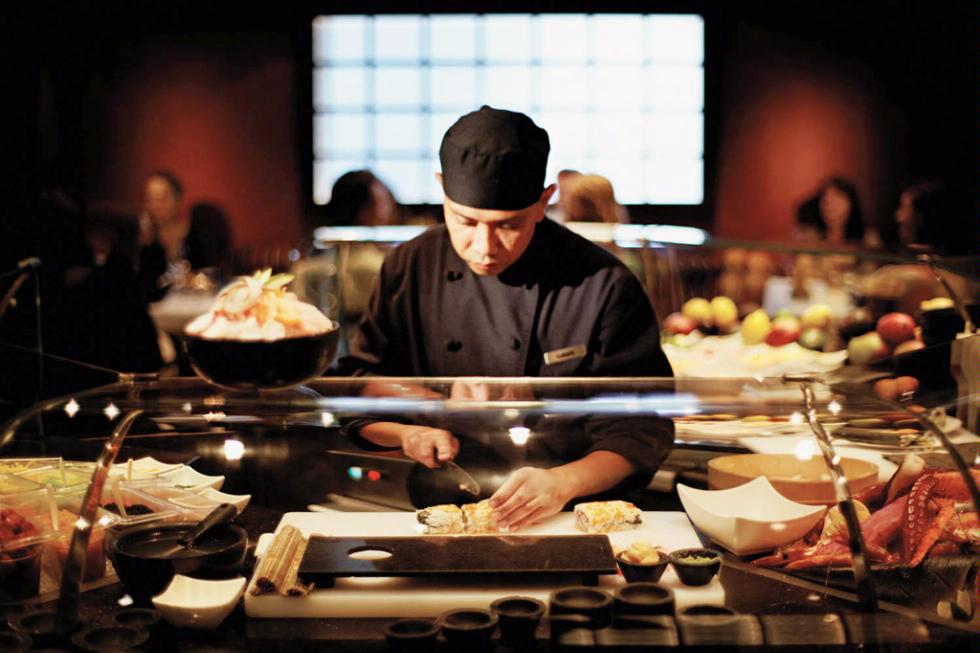 What You Can Sample: An eight-course tasting menu including an amuse-bouche of caviar sorbet followed by assorted sushi, black cod sashimi, a carpaccio of king scallops, a spider crab roll, saku tuna with a soy dressing and caper confit, tempura with a chili sauce and pickles, teppanyaki-style Wagyu beef (a house specialty), and a green tea sorbet

How Much: $30 per person for dinner, including house beverages

Why It's Worth the Splurge: A similar seven-course meal in a fine Japanese restaurant in New York City would cost about $90 per person -- that's $60 more (and one course less).

Photo Caption: The chef at work at Seishin, aboard Silver Spirit 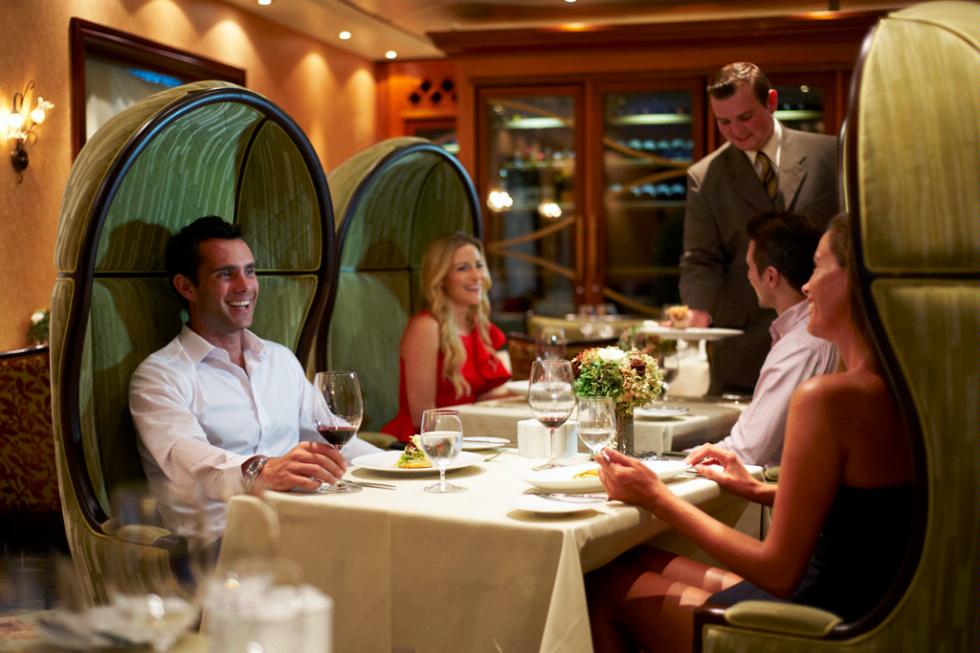 The Experience: This restaurant has all the sophistication -- minus the snobbery. Done up in nature-inspired browns and greens (in a vaguely Art Nouveau style), the room is lined with tables set with Limoges china and crystal glasses. The menus center on the seasons.

How Much: $40 per person for dinner

Why It's Worth the Splurge: A steak au poivre alone at one of Chef Michael Schwartz's land-based restaurants costs $36, while small to extra large dishes range from $8-$52. You could expect to spend at least $80 per person for a similarly portioned meal -- double 150 Central Park's cover charge. 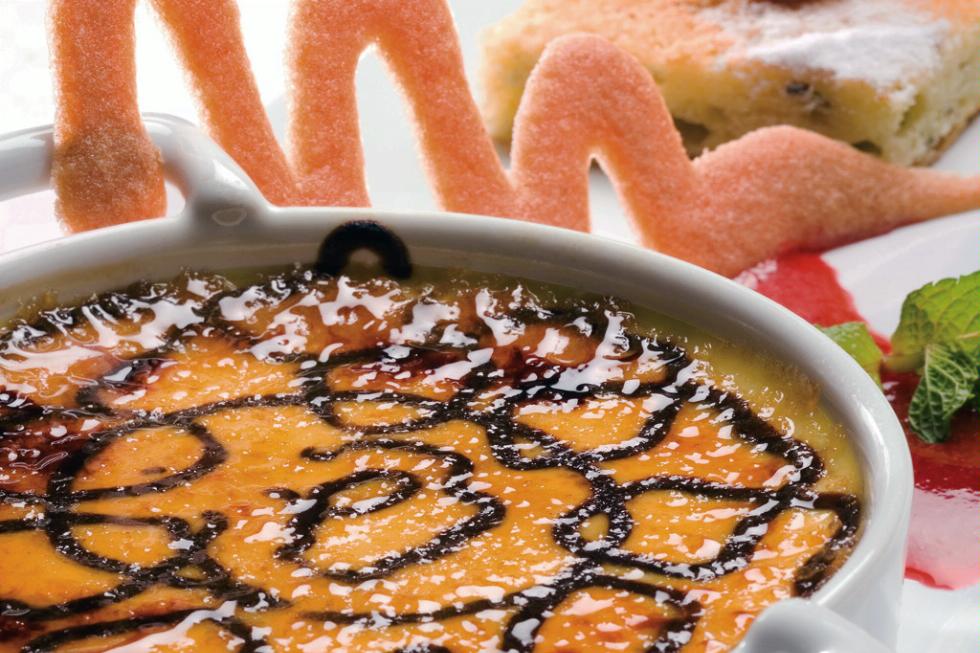 What You Can Sample: A goat cheese soufflé, saffron-scented bouillabaisse, and a heaping platter of seafood: grilled scallops, calamari, tiger ship and lobster. For dessert: a chocolate fondue with fresh fruit and brownies

The Experience: This wood-paneled dining venue has fluted columns and a soothing palette of white and blue. From the panoramic windows scroll the ever-changing seascape -- the perfect backdrop for an intimate dinner for two.

How Much: $25 per person covers a four-course meal, including house wines

Why It's Worth the Splurge: In a popular Mediterranean restaurant in New York City, a four-course meal on par with Aqualina costs $80 per person (with wine pairings) -- that's $55 more. 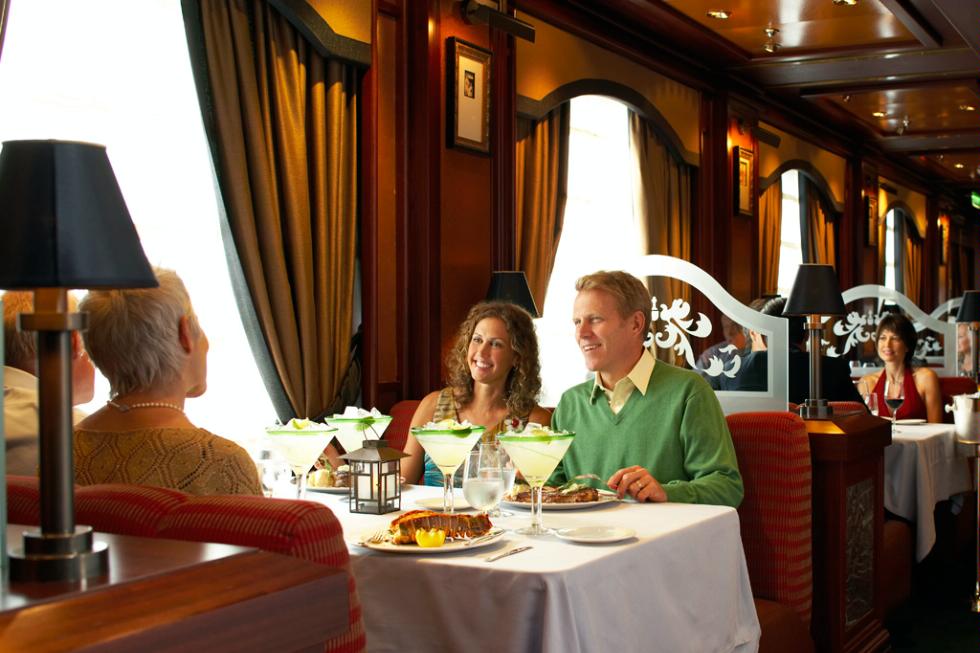 What You Can Sample: Choice of an appetizer, soup and/or salad, a main course, and dessert -- this might include a carpaccio of pine nut-coated lamb loin with gooseberry chutney; a shrimp and pancetta bisque; a 22-ounce porterhouse steak and a corn casserole; and a caramel cheesecake parfait for dessert

The Experience: One of Princess's latest dining venues, the Crown Grill is more like a clubhouse than a chop house -- all dark woods, green marble, and sporting paintings. The ambience is subdued except for the scene-stealing open kitchen: chefs flame sirloins, sear salmon, and steam pots of mussels as chatter of the room never rises above the sounds of sizzling.

How Much: $25 per person for four courses (there's an additional fee for fresh lobster)

Why It's Worth the Splurge: A comparable four-course meal in a NYC land-based steak house would cost around $80 per person -- more than three times the cover charge at Crown Grill. 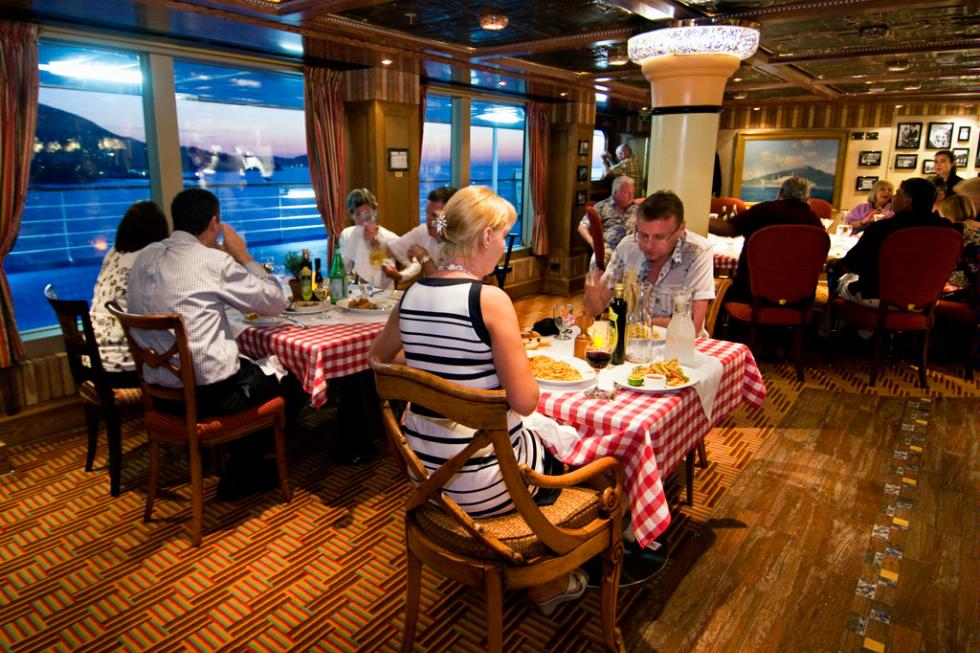 How Much: $12 per person for a family-style dinner

The Experience: In a nod to Carnival's Italian heritage, this trattoria-style eatery is all about famiglia. Expect red-checkered tablecloths, traditional recipes, vintage family photos, and a waiter belting out "That's Amore!" and wheeling out barrels of the Chianti house pour.

Why It's Worth the Splurge: A similar Italian restaurant in New York City would cost around $90 for four courses shared between four people; savings would tally up to $38 for the entire meal. 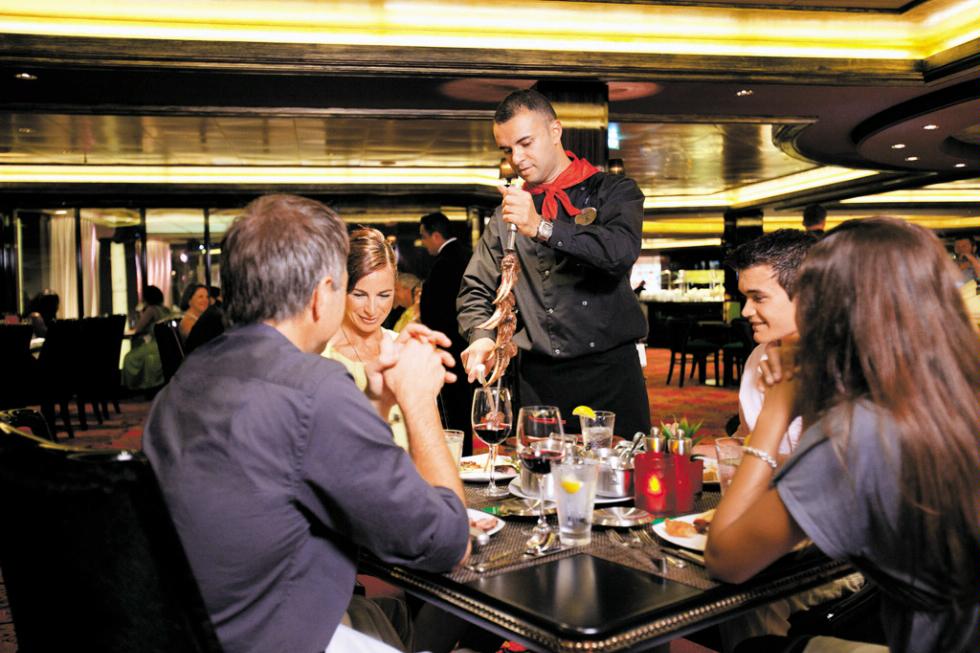 The Experience: A dimly-lit den with dark woods and plush chairs, this Brazilian steakhouse operates exactly in the same way as its shoreside counterparts. Flip your marker to the green side ("go") for a carnivore's Carnavale: waiters will swoosh by tableside with skewers of meat. The Moderno on the Epic has views of the Manhattan-inspired supper club, one deck below.

How Much: $20 per person includes all-you-can-eat skewered meat, side dishes, and salad

Why It's Worth the Splurge: A comparable meal in a New York City churrascaria costs $60 per person -- $40 more than the price at Moderno. 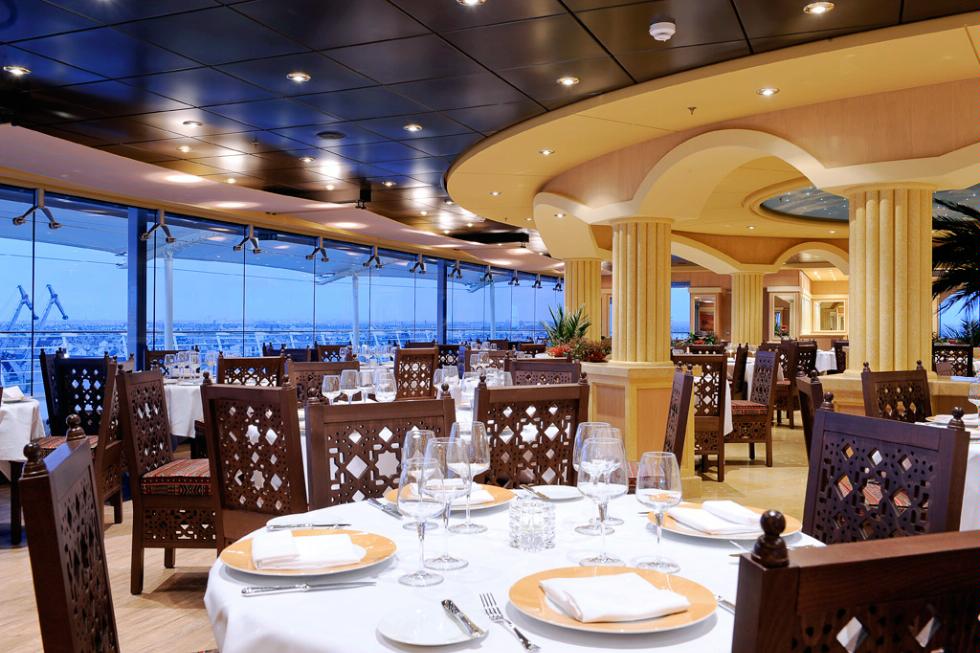 What You Can Sample: A three-course dinner of an octopus carpaccio with a potato brunoise, a pistachio-crusted rack of lamb, and a trio of dark, milk and white chocolate mousse

The Experience: This Mediterranean-inspired bistro treats guests to some of the most magnificent views on the (aptly named) Magnifica. Think of a shifting tableau of sea and shore on display at every table, courtesy of the floor-to-ceiling windows that span the room. Request a table that's fully aft: you'll get unobstructed views of the ship's wake, and the glimmering lights of faraway ships.

How Much: $20 per person for a three-course dinner

Why It's Worth the Splurge: A three-course meal at a NYC restaurant of equal caliber would come to $49 -- a savings of $29 per person.

Photo Caption: L'Oasi is a specialty restaurant aboard MSC Magnifica, which will sail the Eastern Mediterranean and Northern Europe in 2013
Cruise
Food and Drink
advertisement
advertisement