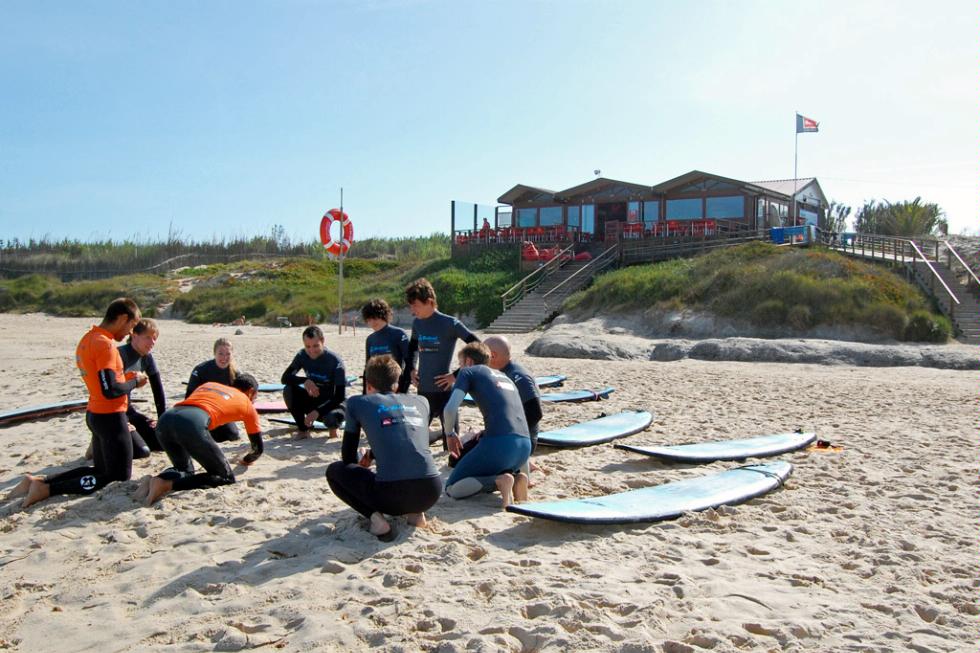 9 Destination Surf Camps Around the World

By Beth Collins
Why spend your beach vacation gazing out at the waves when you could be learning to ride them? Whether you're looking for an intensive one-day lesson or a weeklong immersion course, one of these surf camps will fit the bill. 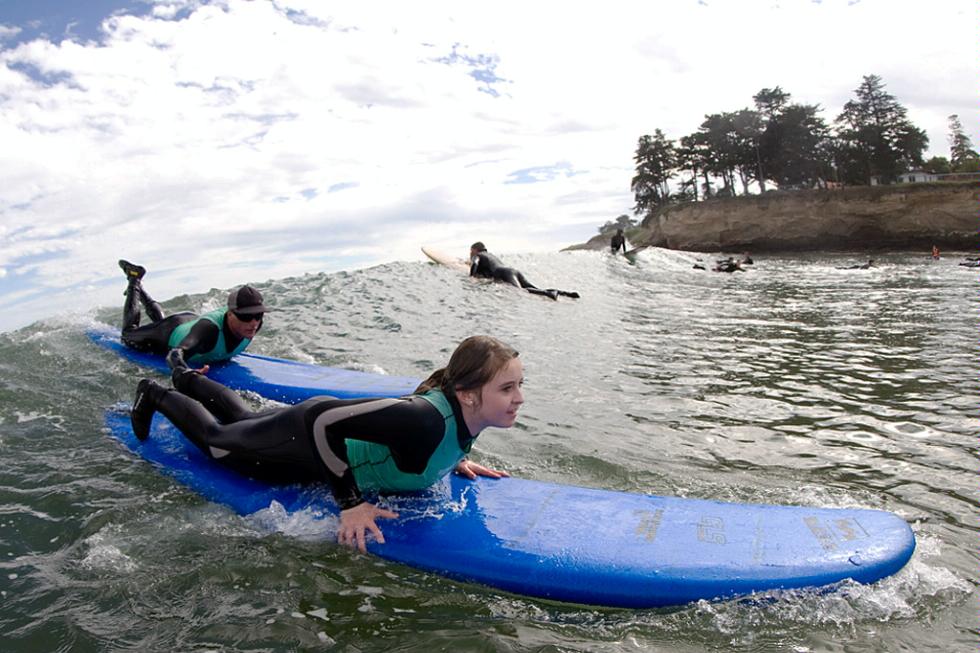 The secret is Schmidt himself, a former professional big-wave rider who has been teaching people to surf since 1978. He and his trained instructors ride alongside beginners, help them up at just the right moment, and watch proudly as their students ride the wave in. After a few rides like this, you'll be standing on your own in no time -- which means the rest of the six-day camp can be all about perfecting your technique.

Mornings kick off with breakfast prepared by Schmidt's wife, Marisa, and a yoga session -- perfect for limbering up before you hit the waves. After that, it's off to any number of Santa Cruz beaches, where you'll surf until lunch and then surf some more. On the second day, you'll get a much-needed sports massage, and every evening you'll watch videos of yourself surfing and get coached on your technique.

Accommodations are tents in a KOA Kampground, but with all the amenities: a pool, a hot tub, laundry facilities, an arcade, mini golf, and ping-pong tables. You'll never feel like you're roughing it. 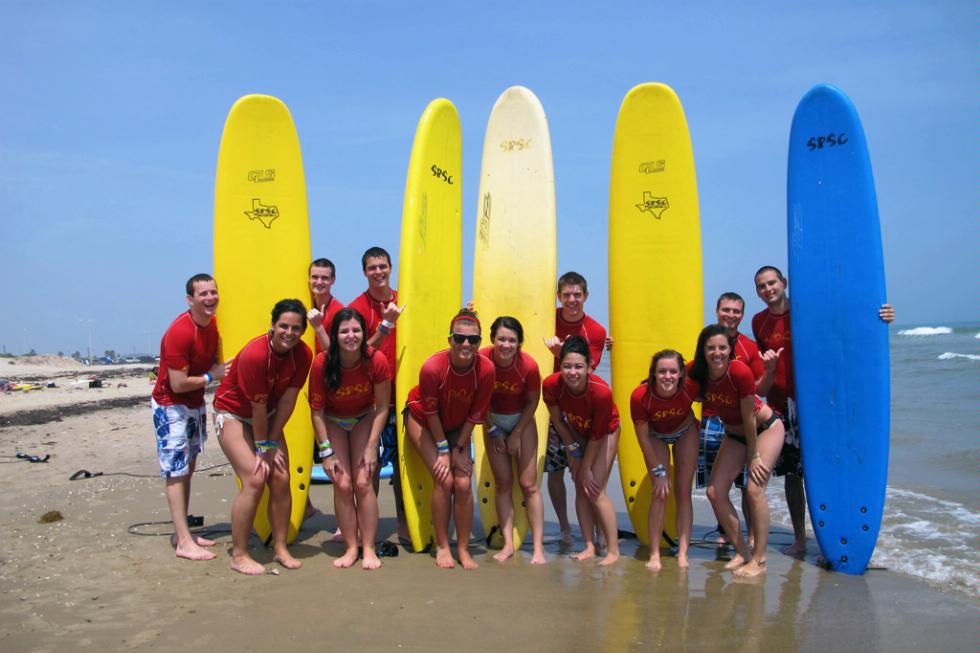 South Padre Surf Company
South Padre Surf Company in Texas
This Texas-based school is perfect for people who want more than just a quickie lesson but don't necessarily want the full immersion of an overnight camp. Run by husband-and-wife team Gene and Rachel Gore, the three-hour camps are geared toward beginners of all ages, from as young as 3 years old all the way up to grandparents who want bragging rights at the next family reunion.

Home turf is South Padre Island at Isla Blanca Beach Park, which is known for its easy beginner waves and its sandy bottom -- a much more forgiving surface than reefs when it comes to wipeouts. The boards are perfect for beginners, too, with their easy-to-stand-on soft foam tops and soft fins, which are much less dangerous than hard fins if they happen to hit you in the water.

The Gore's pack an impressive amount of information into the morning, including water safety, how to paddle, surf etiquette, how to read the waves and, of course, how to surf. Their kids, Micah and  Melia -- both ridiculously good surfers themselves -- are often on hand to help out. 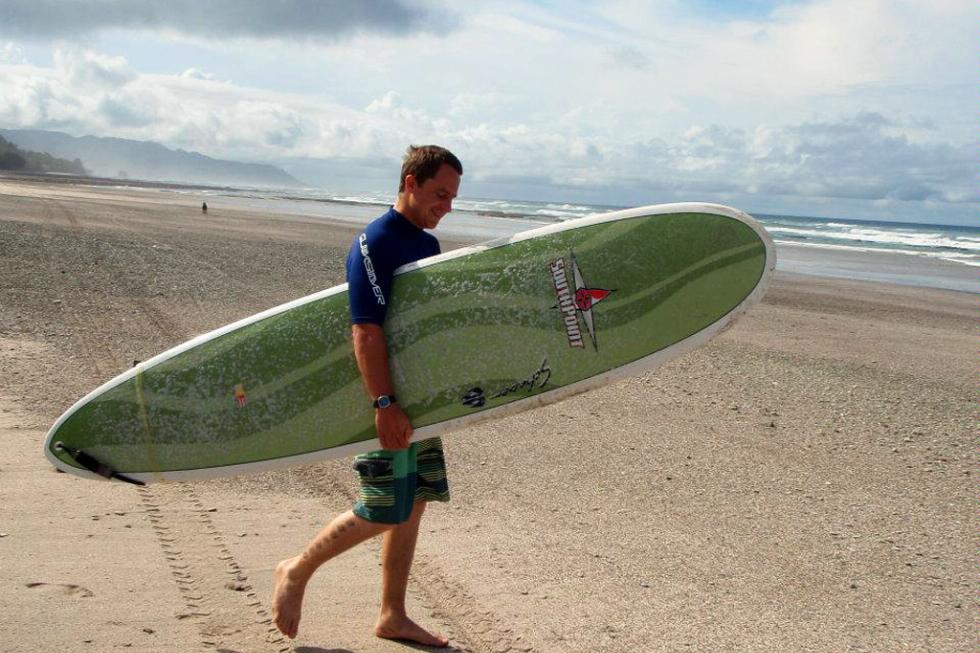 Shaka Beach Retreat
Shaka Beach Retreat in Costa Rica
If crawling into a sleeping bag after a long day of surfing doesn't appeal, Shaka Beach Retreat may be more your speed. Instead of tents, campers sleep in private beachside villas, complete with comfortable beds, ceiling fans, and sinks. The grounds -- tropical gardens with fruit trees -- are almost as pretty as the Nicoya Peninsula beaches where the daily surf lessons take place.

The surf camps last five or seven nights, and can be combined with a yoga package. (Our advice? Add the yoga -- morning sessions in the oceanfront studio are something you'll never forget.) In addition to surf instruction, you get a special session on board safety, technique, mechanics, and theory, plus another session on balance, coordination, and core strength. When you're not surfing or lounging in the communal open-air rancho, grab the snorkel gear and head out to the reefs. 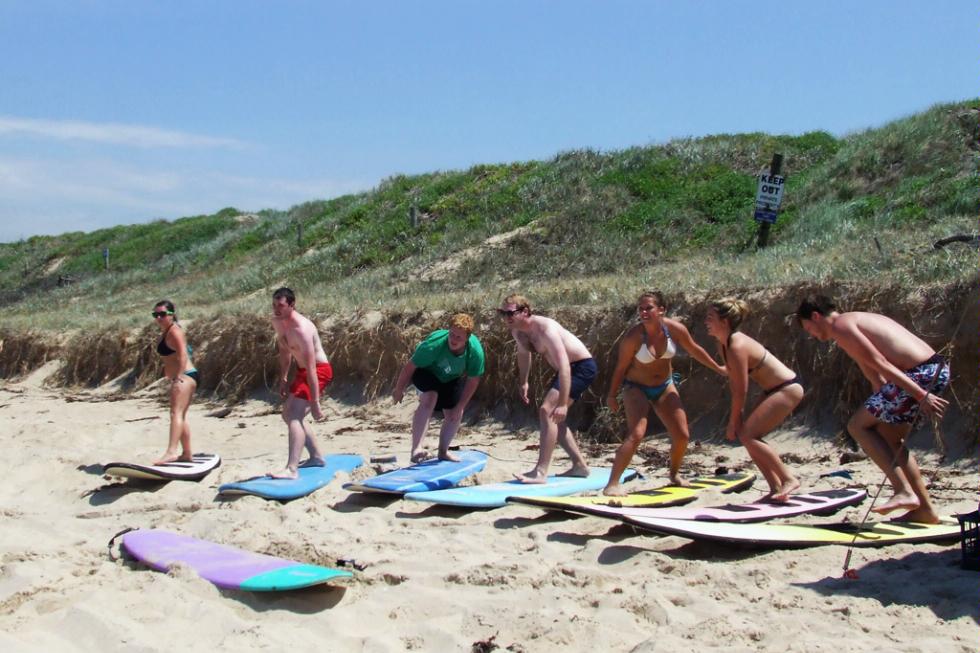 Waves Surf School
Waves Surf School in Australia
No matter what your schedule while in Australia, chances are Waves Surf School has an option that will suit you. Only have one free day? Go on the one-day surf trip to the Royal National Park, about an hour from Sydney. Have a little more time to spare? Join the two- or four-day camp at Seal Rocks. Hoping for a little more immersion into the sport? Take the five- or seven-day trip from Sydney to Byron Bay (probably the most famous surf spot on the continent) and back.

In addition to top-notch instruction, you'll also get access to insider beaches you'd likely never find on your own (and even if you could find them, you wouldn't be able to reach without a 4-wheel-drive vehicle). Overnight lodging is in cabins, but don't be surprised if you don't spend much time in them -- with a pool, volleyball and tennis courts, live music and drinks on the beach, nights at Waves Surf School tend to be as active as the days.

Photo Caption: Students learn the proper way to stand on a board during a lesson at Waves Surf School in Sydney, Australia. 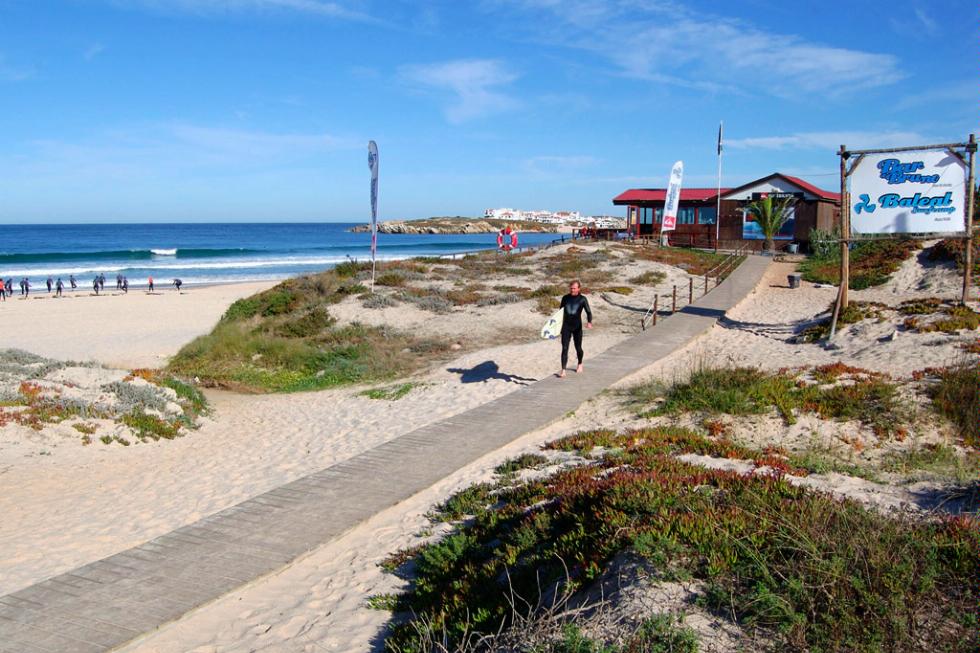 Sandra Stubenvoll
Baleal Surf Camp in Portugal
If there's a better location for a surf camp in all of Portugal, it has yet to be discovered. Baleal's home base -- Cantinho da Baía beach, on the Peniche Peninsula -- has long, smooth waves that peel left to one side and right to the other, making it the ideal learning spot for beginners. The peninsula has more than 30 other breaks ranging from gentle cruisers to expert-level barrels, so there's a break for every type of surfer.

Camps last three, seven, or 14 days and include two 2-hour lessons each day (though the surfing doesn't stop there -- campers are free to use the boards all day long). There's a luxury lodging option 15 minutes from the beach, but most campers choose the more communal atmosphere of the hostel, which sleeps two to five people per room, or the one- or two-bedroom apartments -- both options are walking distance to the beach. Also on-site is Bruno's Bar, a beachside gathering spot with live music, free admission for campers, and a 6 a.m. closing time. 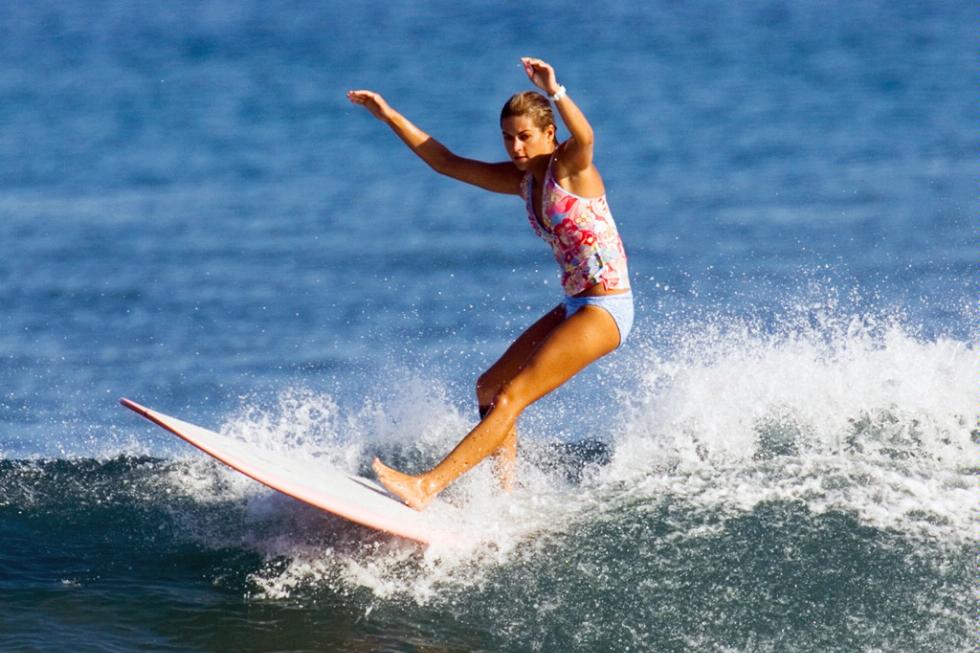 Lori Adamski Peek
Las Olas Surf Safaris for Women in Puerto Vallarta, Mexico
You can find women-only surf camps all over the place these days, but when Los Olas launched in 1997, the concept was brand-new. The camp prides itself on providing an atmosphere of support rather than competition, with a focus on developing inner strength and bonding with the ocean. If that sounds overly earnest, never fear. The main goal here is good old-fashioned fun -- a sentiment that's best captured in the camp's slogan, "We make girls out of women."

Las Olas feels like a vacation from the minute the team picks you up at the airport to the sad goodbye, when they drop you off at the end of your stay. Lodging is in oceanfront cabana-style villas built by local craftsmen, there's optional yoga in the mornings, and the on-site massage therapists are surfers themselves, so they know exactly which muscles to target after you've spent a day in the waves. When you're not surfing, SUPing (stand up paddle surfing), or exploring the town of Puerto Vallarta just a short walk away, you might try out one of the rotating classes offered at the camp, like margarita making or salsa dancing. 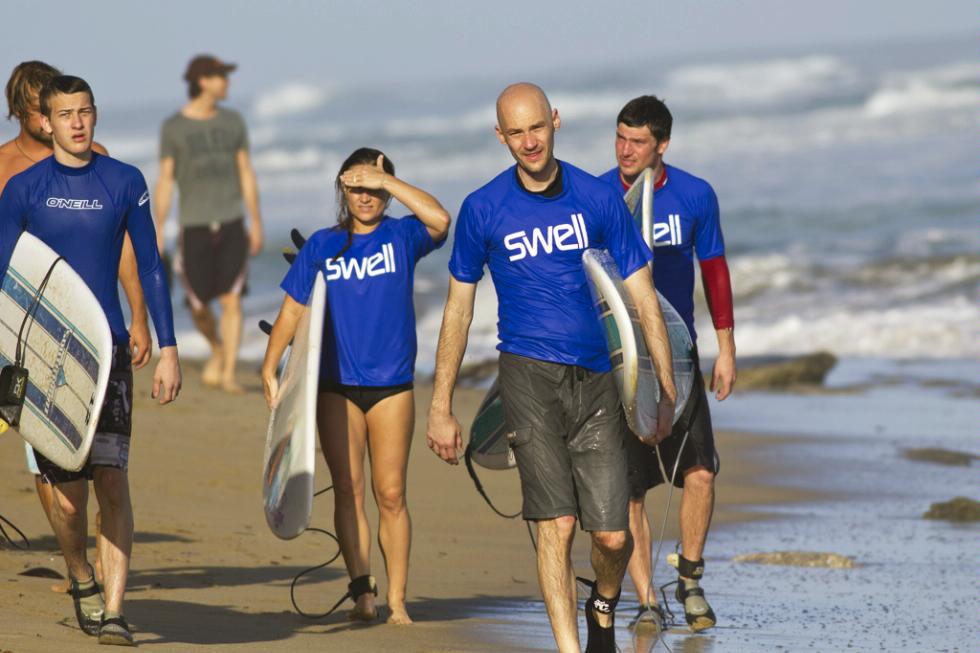 Swell Surf Camp
Swell Surf Camp in Cabarete, Dominican Republic
Think of Swell as the anti-surf camp. There's plenty of surfing, of course, but the similarities to other camps end there. For starters, the rooms are stylish -- more boutique hotel than reggae-loving surfer digs. Then there are the legendary breakfasts (omelets, pancakes and crepes, fresh-squeezed orange juice, and fruit bowls) and the rave-worthy dinners (everything from a traditional Dominican spread to chicken cordon bleu to lasagna).

Structured lessons take place each morning, with an instructor alongside you and the head coach watching from shallow water, ready to offer tips between rides. During the afternoons, you're free to surf some more or relax on the grounds. Lounge by the pool, play ping-pong or foosball, or doze in the hammocks. You'll also want to spend at least one afternoon exploring the town of Cabarete, just a quick walk from the camp. 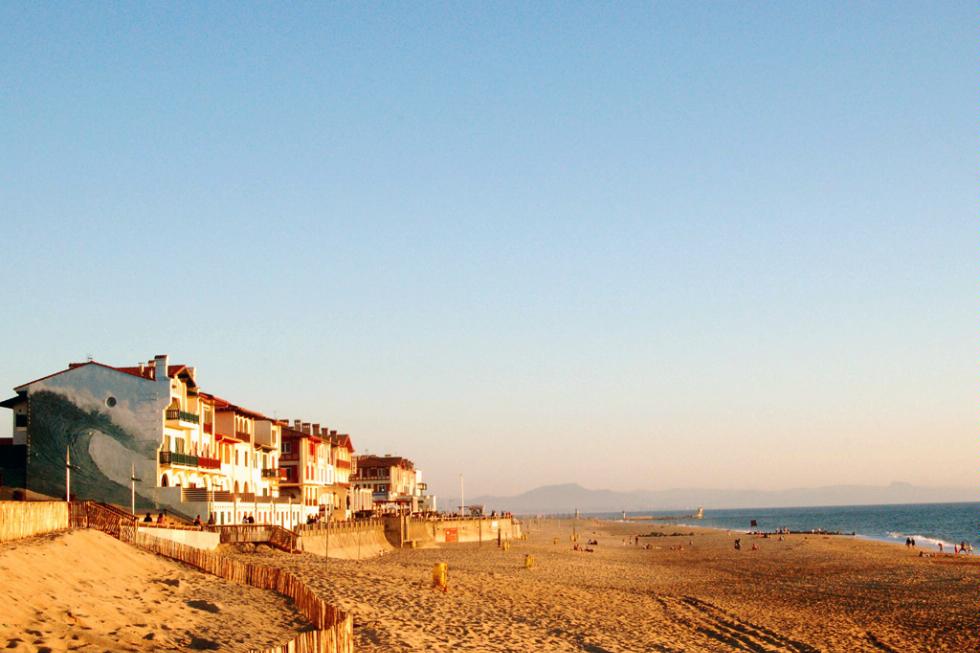 Koala Surf Camp
Koala Surf Camp in Southwestern France
About a 45-minute drive north of Biarritz, the town of Hossegor isn't just one of the top surfing spots in France, it's one of the top surfing spots in the world. When you're not catching waves at La Nord and La Graviere, two legendary breaks just a minute's walk from the camp, you're going on "surfari," instructor-led excursions to different breaks along the coast.

You can choose from two lodging options: the Surf House -- essentially a hostel, with a communal sleeping space, a kitchen, a patio, and a "chill-out corner" stocked with surf movies and magazines -- or the Communal Rooms, which sleeps four to six people and has two big balconies, perfect for sipping a beer after surfing all day.

How Much: From $210 per person for six nights' lodging, surf instruction, a surfari, and unlimited use of surfboards and skateboards

Photo Caption: The Koala Surf Camp is situated on the beach in Hossegor, France 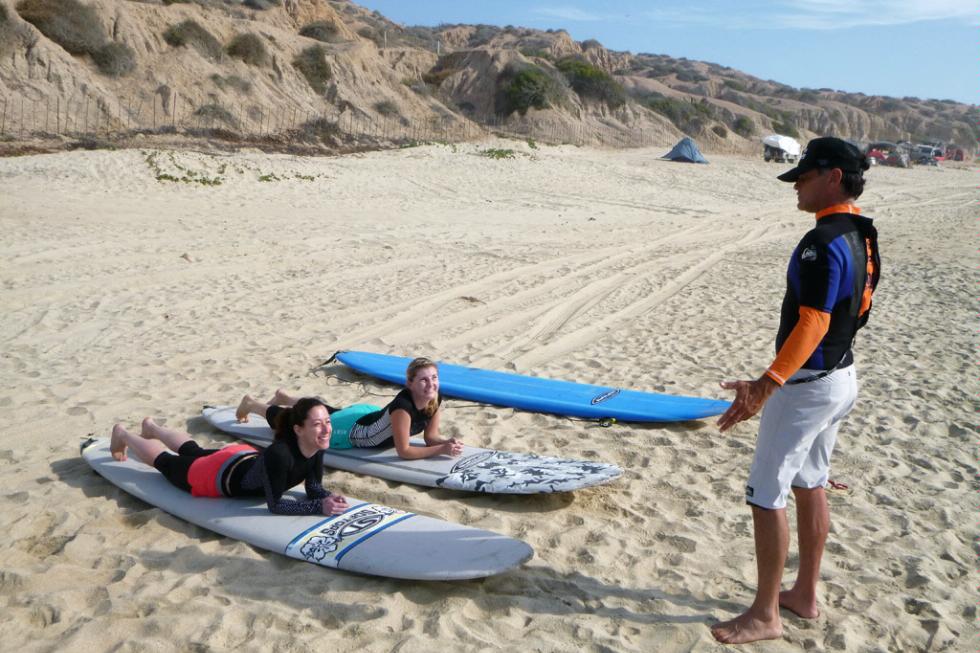 Paskowitz Surf Camp
Paskowitz Family Surf School in San Diego, California
Launched in 1972, this is believed to be the longest-running surf camp in the country -- and certainly the one with the most infamous backstory. As chronicled in the 2007 documentary "Surfwise," the patriarch of the family, Dorian "Doc" Paskowitz, quit his job as a medical doctor to become a full-time surfer. He and his wife, Juliette, took on a truly bohemian lifestyle, raising their nine kids in 24-foot camper van as they traveled from beach to beach and perfecting their surfing skills. Eccentric, to be sure, but all that beach time created a family of incredible surfers, and a school dedicated to the art of surfing.

The Paskowitz approach focuses on not just teaching people how to surf, but on creating surfers. In other words, it's not all about shredding on the waves; instead, it's about finding a deep appreciation for the sport and a respect for the ocean. Of course, with a 1:3 instructor-student ratio, campers can't help but finish the five-day camps in San Diego with impressive technical skills. 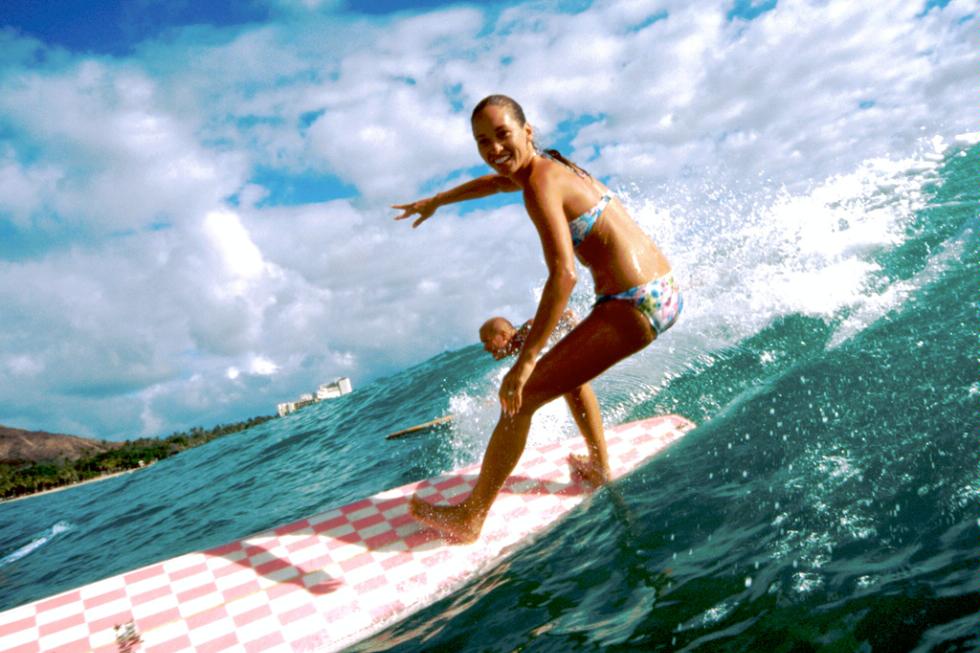 David Pu'u
Nancy Emerson School of Surfing in Oahu
If you're looking for customized surf instruction, look no further than Nancy Emerson School of Surfing. Rather than relying on a one-size-fits-all teaching method, Emerson and her team go to great lengths to get to know the student first -- in fact, Emerson herself will call you to discuss your level and learning style. Once they have a good feel for your ability, they design a lesson tailor-made to you.

With the staff's pedigree -- Emerson is a former pro surfer who has been teaching since 1973, and all the other instructors have a minimum of 10 years of surfing experience -- it's not hard to believe that 99% of first-timers stand up and ride a wave during their first lesson, and experienced surfers quickly rise to the next level. But it's not just about perfecting your hang-ten or nailing the perfect cutback. Emerson believes success in surfing is about understanding the ocean, so she makes sure all her students learn how to read the ocean and understand the currents.

The school's custom-made approach means you can do as few or as many lessons as you'd like, and you can even alternate between surfing, SUPing, and paddling. There's no overnight component, but Emerson will help you find lodging that fits your budget.

Photo Caption: Student from Nancy Emerson School of Surfing on the water in Hawaii, with Diamond Head visible in the background.
Beach & Water Sports