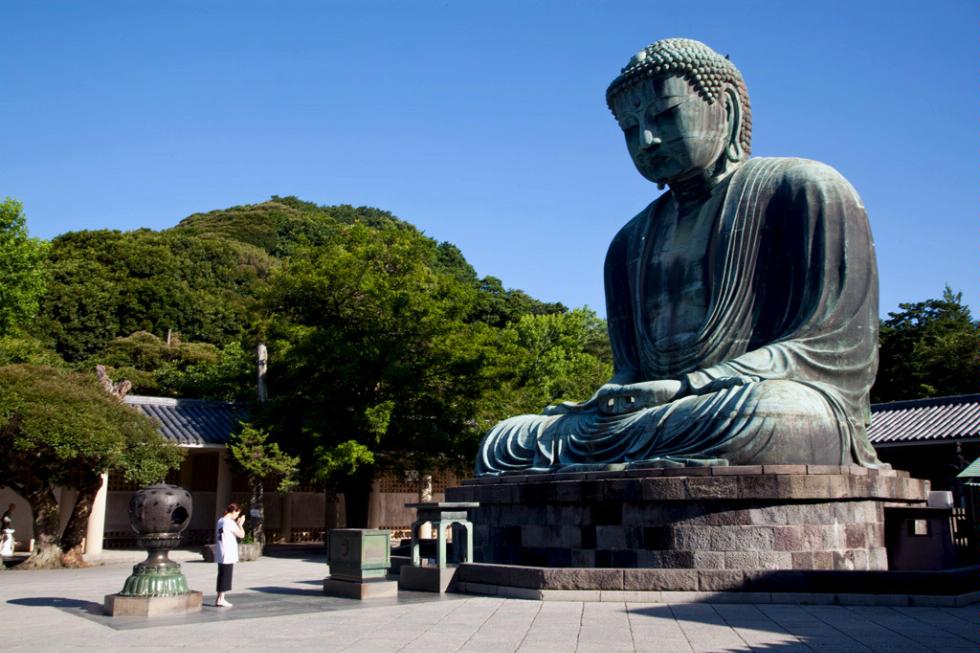 Favorite Temples and Shrines in Japan

By Ross Walker
Take a tour with us through some of the most peaceful Shinto and Buddhist temples and shrines in Japan and uncover the rich cultural history of this island nation. From giant Buddha statues to doll-sized figurines, the artistic gems of these Japanese religious sites are sure to delight and inspire. 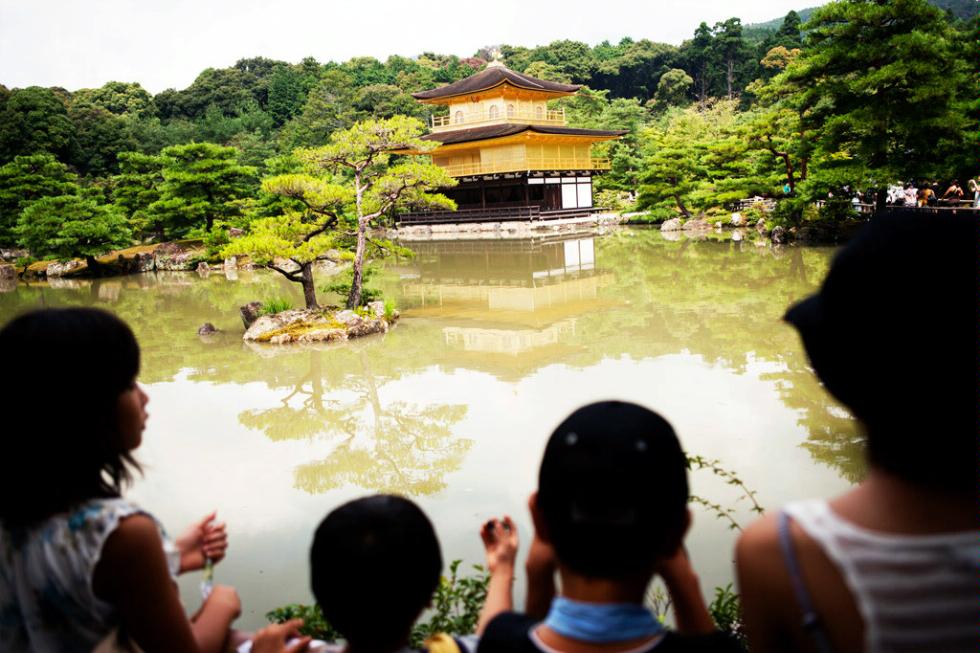 Marco Garcia
Kinkakuji Temple, Kyoto
Each floor of Kinkakuji Temple celebrates a unique aspect of Buddhism. The first floor is open-air style to allow the visitors and monk to transition easily between the garden and temple. The second floor is dedicated to warriors and aristocrats, but also contains a shrine to the goddess of mercy, Kannon. The third floor focuses on Zen architecture. Most of the walls are equipped with sophisticated shutters that can be manipulated to allow very specific amounts of light into the temple. The Temple is often called the Temple of The Golden Pavilion and rests in a small pond. 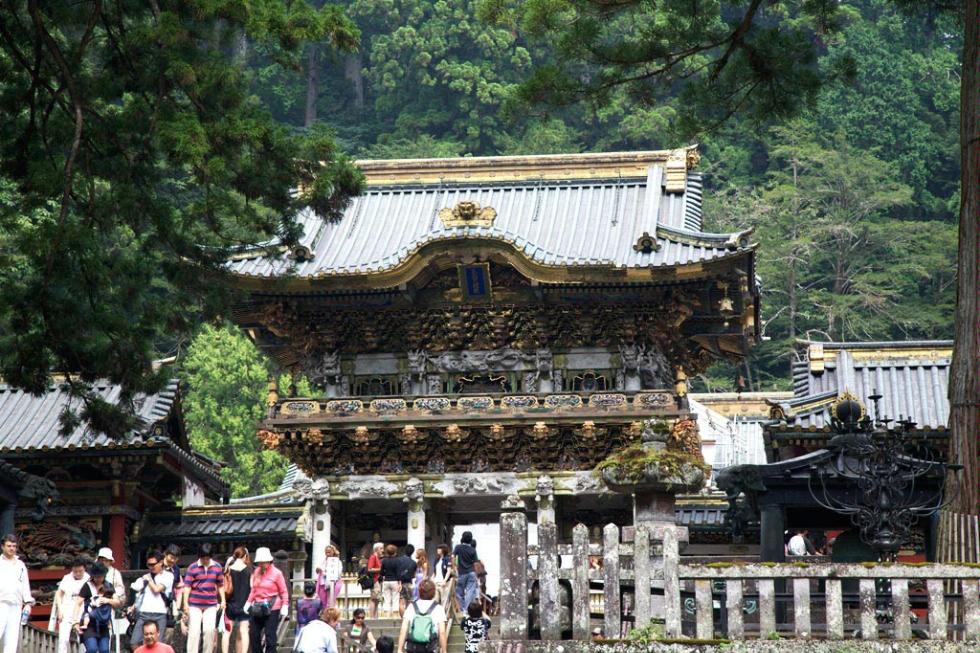 Akihiko Takaba
Nikko Toshogu Shrine, Nikko
Nikko Toshogu is a shrine dedicated to Shintoism, a Japanese religion that professes everything, living and nonliving, has a soul. This 55 building complex was rebuilt in 1636 after fires destroyed many parts of the original complex. Reconstruction was finished in only a year and five months and would have taken 3.3 million dollars to complete today. The Shrine’s paths and stairways follow the natural topography and instill a sense that the temple is in harmony with nature. Take a look at the monkey carvings next to the stable, possibly the original version of the famed “See No Evil, Speak No Evil, Hear No Evil” iconography. 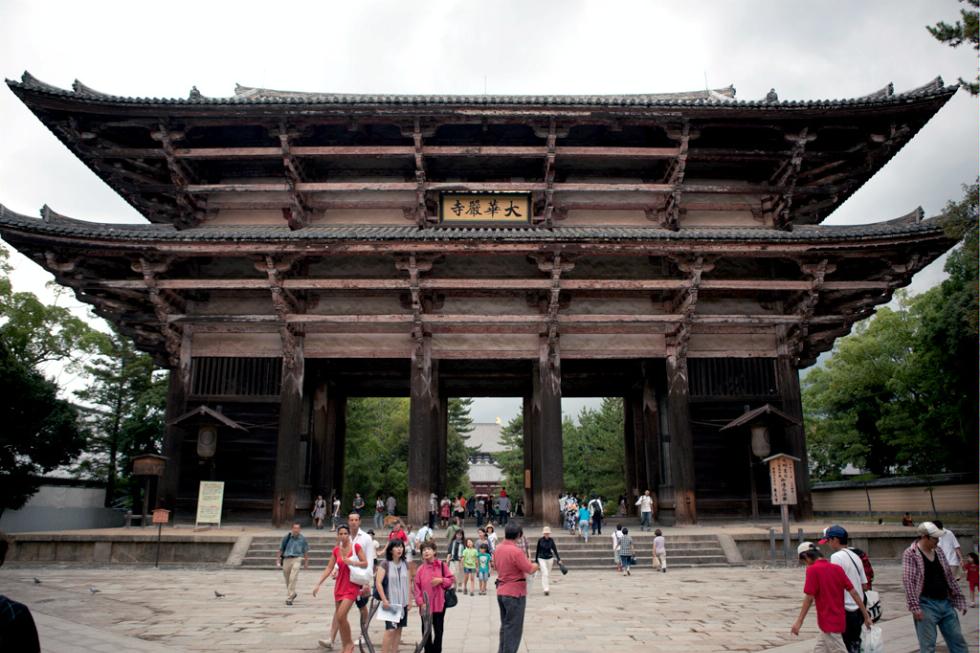 Marco Garcia
Todaiji Temple, Nara
In 741 A.D. Emperor Shomu constructed Todaiji to be the chief temple in a system of Buddhist temples. To that end the temple has long devoted itself to rituals that promote the peace of the nation; it was also a center for the training of Buddhist Scholar monks. The temple building is the largest wooden structure on the planet, though because of  damage from fires and battles over the centuries, it had to be rebuilt in the late 1600's...and is only about two-thirds the size of the original. Inside, it houses one of the largest bronze Buddha statues in Japan, a towering 15-meter (49 feet) giant.
advertisement 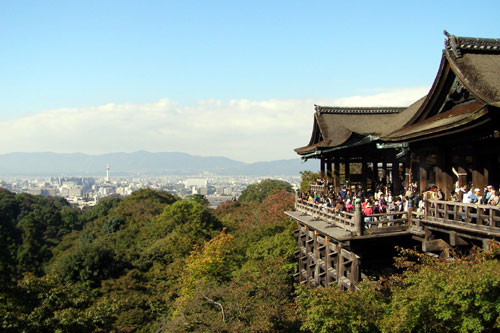 Pey Yee
Kiyomizudera Temple, Kyoto
Kiyomizudera Temple was established in 778, before Kyoto was the capital, and like many other temples has, unfortunately, burned down many times. The current buildings were last rebuilt in 1633. The Main Hall is a designated national treasure. It houses a statue of the eleven-headed and thousand armed Kannon-Bodhisattva. Outside of the Hall is the Kiyomizu stage, a raised wooden platform built entirely without nails, one of the most iconic structures in Japan due to its sophisticated architecture, sweeping views and majestic setting. 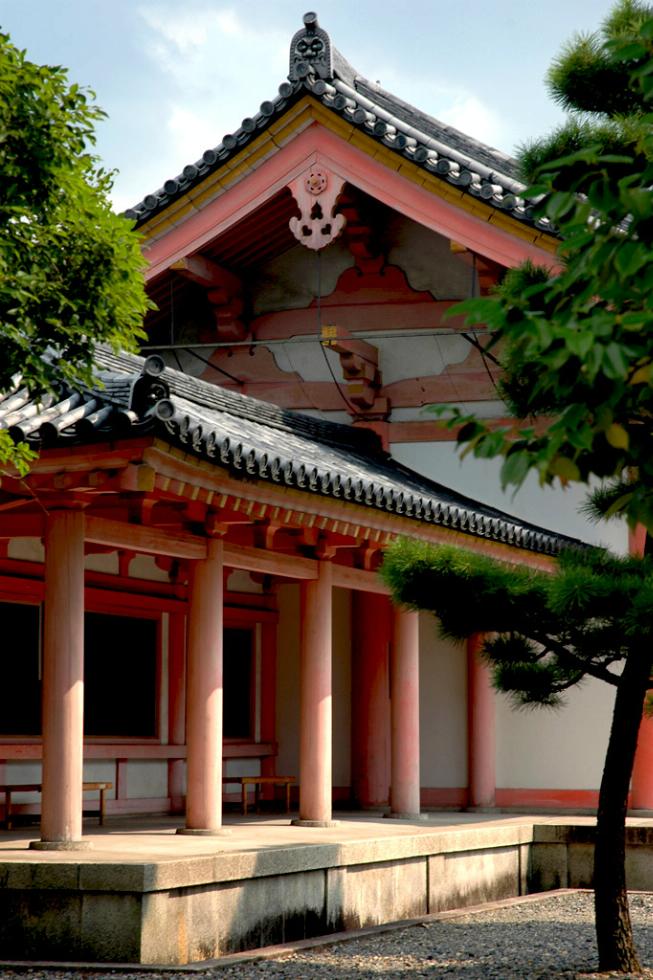 Pichunter
Sanjusangendo Hall, Kyoto
What Sanjusangendo Hall lacks in height it makes up for in length. The name means 33 intervals, which is the distance between each support column in the temple. In today's measurements the hall is 120 meters, the longest wooden structure in Japan. The Hall is a dedication to the Goddess Kannon, whose likeness you’ll see in the form of a large, 1000-armed statue. She’s in good company: on each side of the statue there are 500 mini-Kannons lining the walls.
advertisement 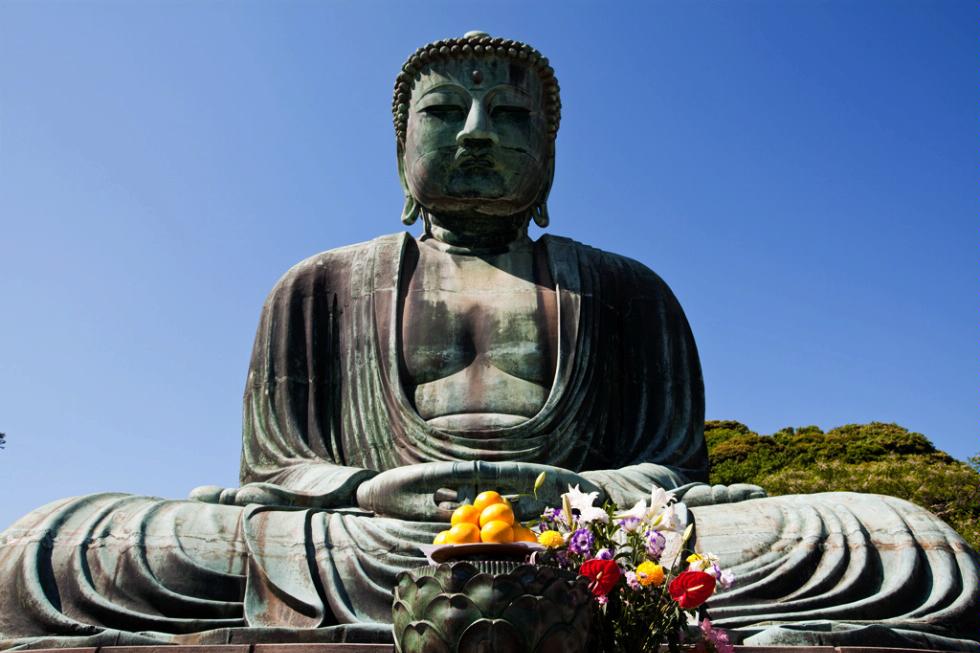 John Lander
Kotokuin Temple, Kamakura
Japan's second-largest bronze image, The Great Buddha of Kamakura, is the main feature of Kotokuin Temple. The fact that The Great Buddha stands in open air is unique—a building encloses most sacred statues. The Buddha’s features, like the deep blue eyes and gentle smile, transmit a feeling of contentment and serenity to worshippers. After the Buddha, Kangsetsu-do Hall is the most historically significant part of Kotokuin Temple. 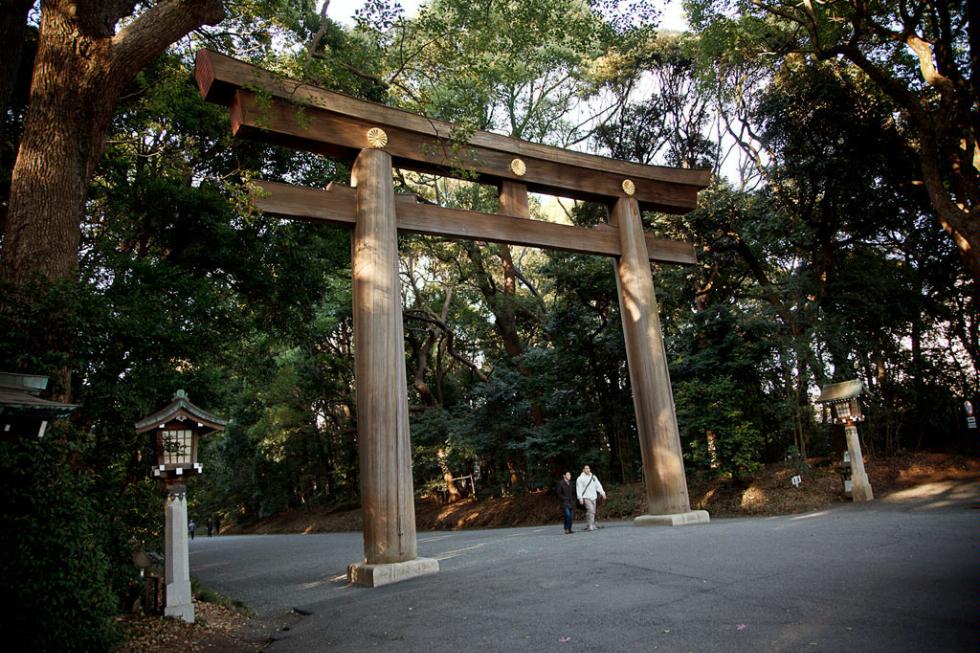 Jérémie Souteyrat
Meiji-Jingu Shrine, Tokyo
The Meiji Jingu Shine is a shrine to Shintoism, Japan's original and oldest religion, though the Shrine itself is not old at all. Established in 1920 it is dedicated to Emperor Meiji and Empress Shoken, both of whom died in the early 1900's. All of the temple buildings were destroyed during air raids during the Second World War, and all of the destroyed buildings were reconstructed in the 1950's. Some of the buildings have only been recently added, such as Kaguraden Hall, built in the 1990’s. Visitors can request to participate in Kigansai, a ritual song and dance, at Kaguraden Hall with the Shinto shrine maidens and priests.
advertisement 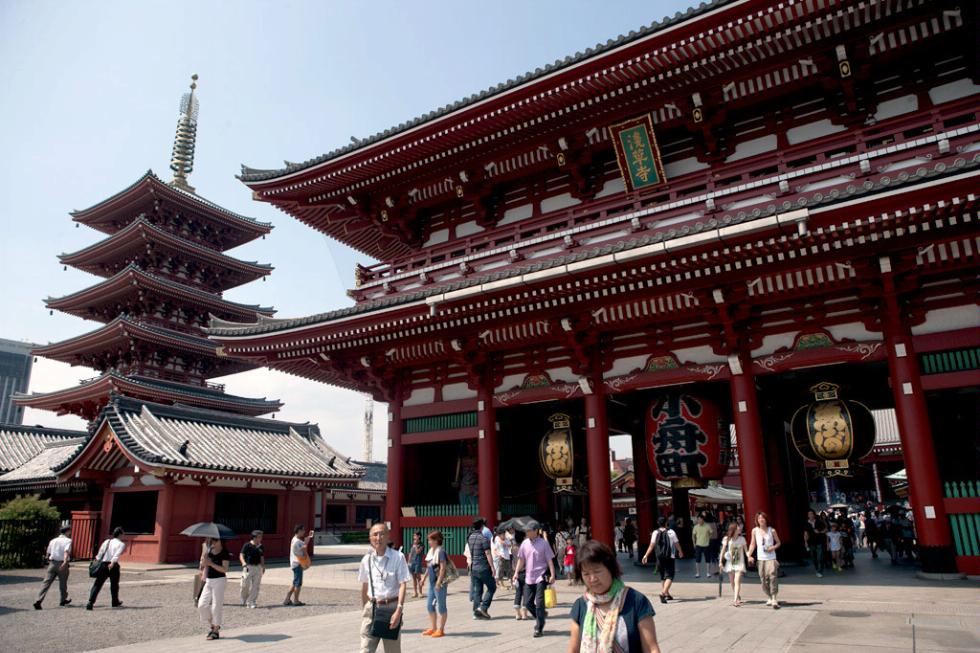 Marco Garcia
Senso-ji Temple, Tokyo
Senso-ji has a legendary past. Two men were fishing in the Sumida River and found a statue of the Bodhisattva Kannon in their fishing nets. After the village headman heard the news he remade his home into a temple and spent the rest of his life devoted to worship. The fishing village of Asakusa became an important pilgrimage site, and the Temple there is the oldest in the Tokyo area. Unfortunately during the air raids of Tokyo during World War II many of the temple buildings were destroyed. After reconstruction, a spectacular light display was added to the Pagoda, the Main Hall and two gates to commemorate the 400th anniversary of the Edo Shogunate. 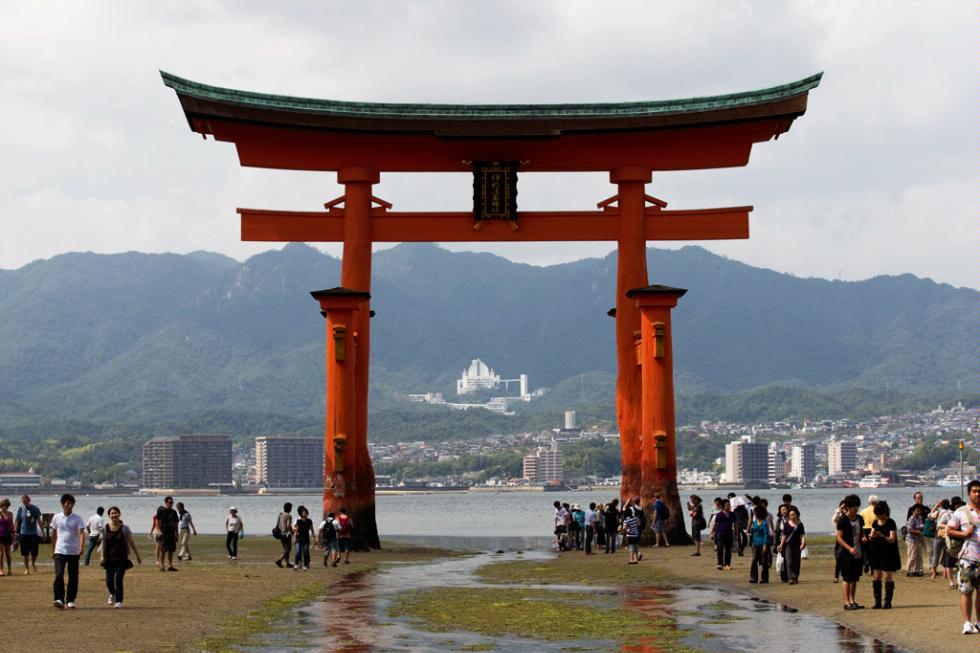 Hiro Komae
Itsukushima Shrine, Hiroshima
The Itsukushima Shrine is one of the most unique building complexes in the world. Most of the buildings stand in the sea and move up and down with the changing tides. The reason for this isn't known today. One of the leading theories is that the temple was an attempt to build the mythical "Dragon Palace", an undersea palace dedicated to the dragon god of the saw. Others contend that the palace is built in the spirit of Pure Land Buddhism because in that tradition the dead cross over to the next world by boat. In any case, the temple is a magnificent feat of engineering. While there walk along the East and West corridors which are outfitted with small slats to stabilize the temple during high tide.
advertisement 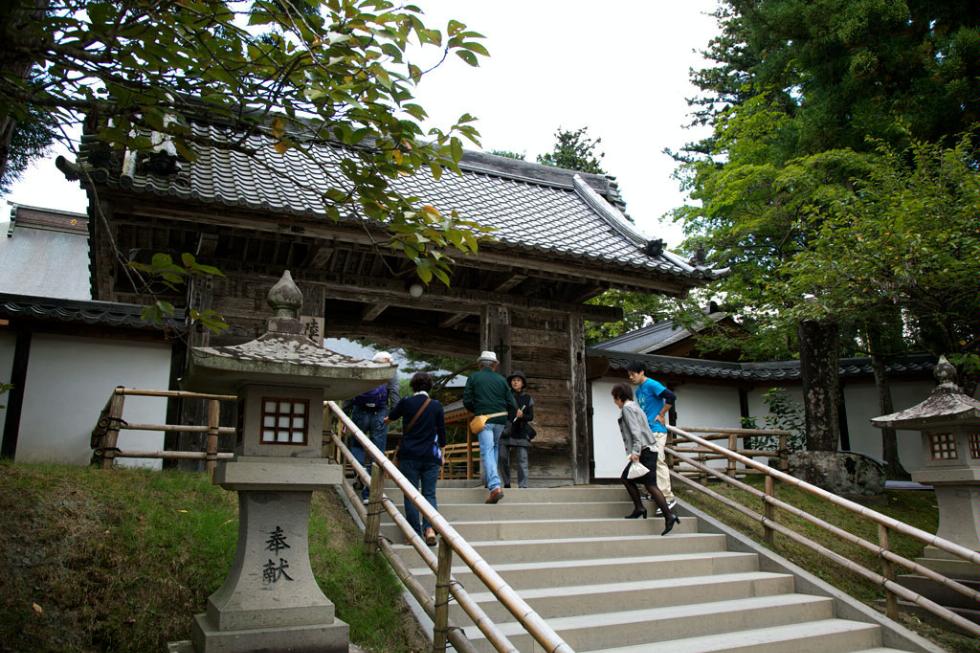 Akihiko Takaba
Chusonji, Hiraizumi
The Konjikido Golden Hall, founded in 850, was Japan’s first designated National Treasure; craftsmanship and grandeur are the reasons why. The entire Hall is adorned in golden leaf, apart from the roof, and several of the statues on the altar are solid gold. Four generations of Oshu Fujiwara Lords are interred underneath the golden artifacts, which makes the temple even more unique, because this is the only burial site housing four consecutive lords of the same bloodline.
Local Experiences