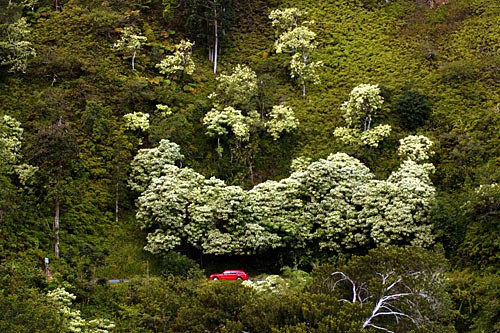 Although you can do the 50-mile route from Kahului to Nahiku in three hours, it's best to carve out a day so you can really enjoy the road trip. Bring a few beach towels, a swimsuit, and a picnic lunch. Don't forget your camera -- the Road to Hana covers some of Hawaii's best landscapes.

Photo Caption: The 54 bridges and natural beauty along the Road to Hana makes the drive a perfect way to spend the day. 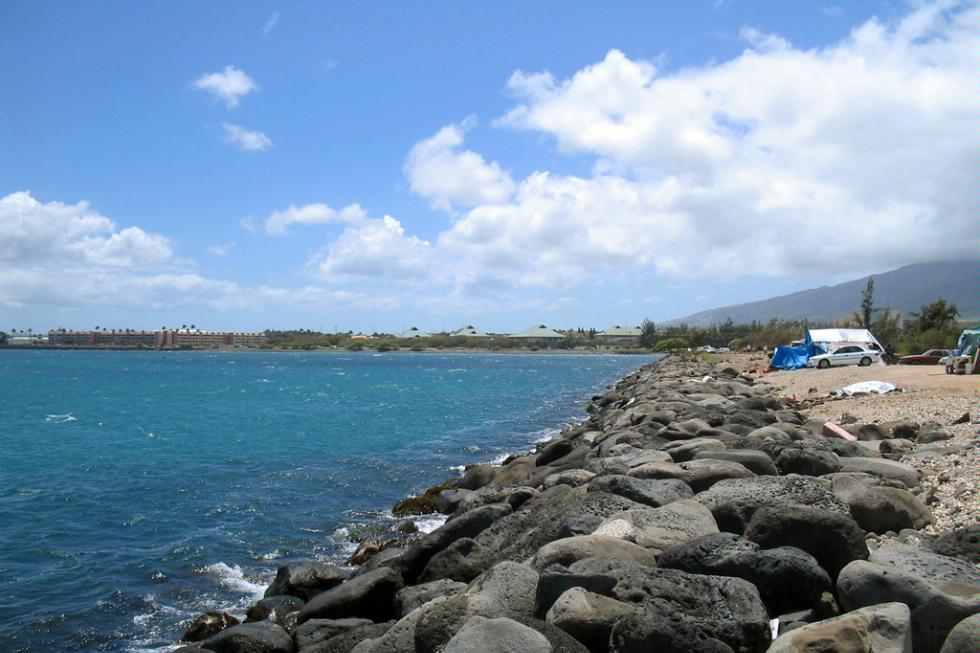 omegaman
Start in Kahului.
Before you even start out, fill up your gas tank. Don't wait to get gas in Paia, the last place for gas until you get to Hana (even by Maui standards, the gas in Paia is unbelievably expensive). Plan to leave early -- Hana is some 54 bridges and 600 hairpin turns down the road. 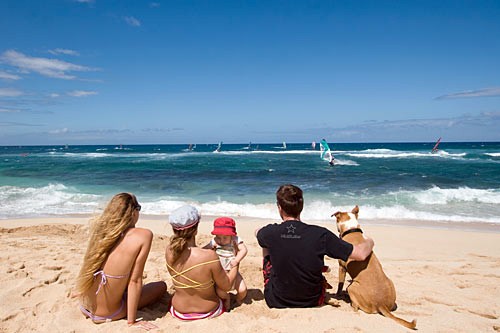 Carla Jalbert
Catch the windsurfers at Hookipa Beach Park.
Hookipa (hospitality) is where the top-ranked windsurfers come to test themselves against the forces of nature: thunderous surf and forceful wind. 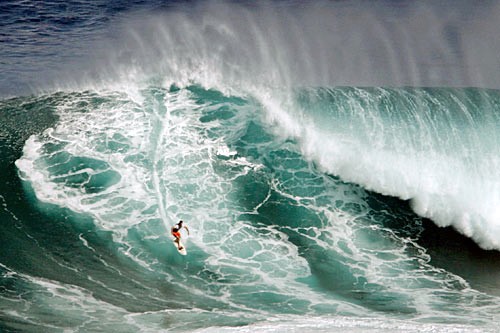 Kristin Mills
See 60-foot swells at Jaws, off Pauwela Point.
If it's winter and surf's up, here's your chance to watch expert tow-in surfers battle the mammoth waves (60 feet or so) off Pauwela Point. The area is known as Jaws because the waves will chew you up.

Photo Caption: Each winter, surfers are chewed up by 60-foot swells at Jaws off Pauwela Point. 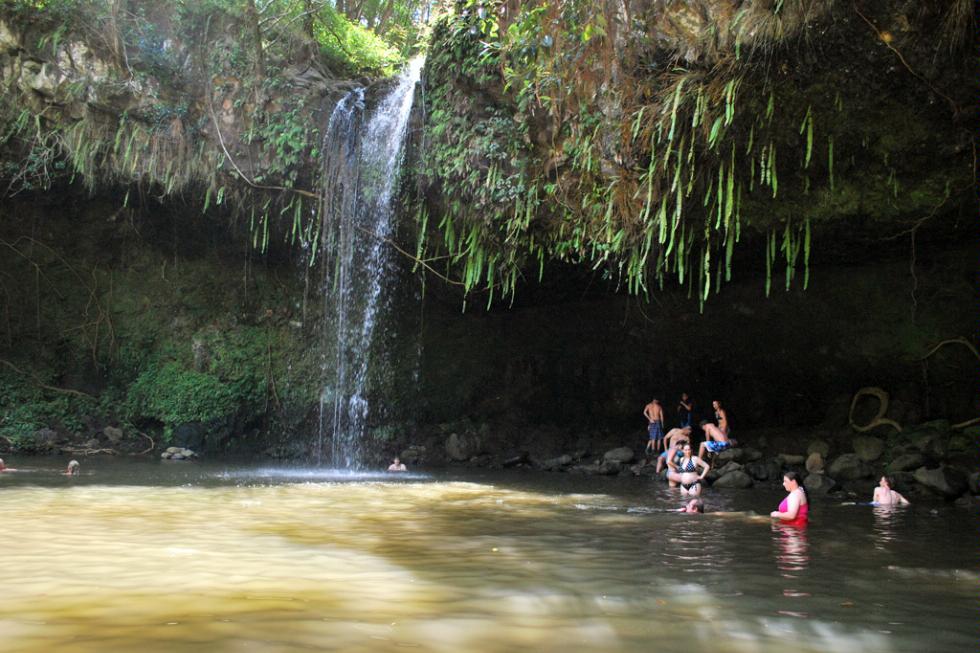 rocketlass
Swim near Twin Falls.
Pull over on the mountainside and park, then walk about 3 to 5 minutes to the waterfall and pool. The mountain stream is chilly when you first get in, but it's good for swimming. If it's crowded, keep going -- plenty of other swimming holes and another waterfall are coming up.

Photo Caption: Swimming in the pool near the Twin Falls in Maui 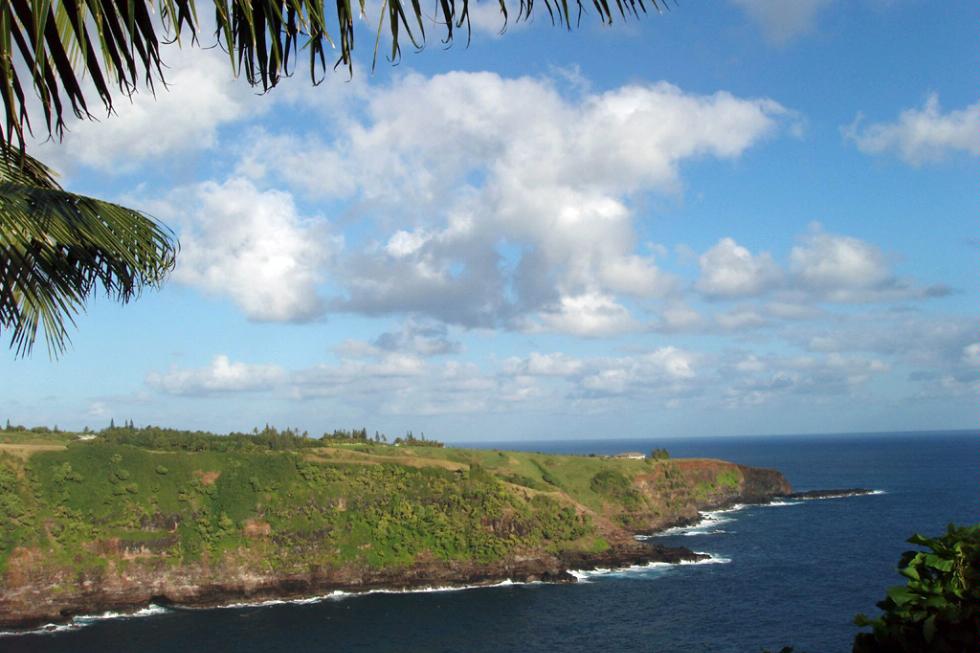 gelrodandjodie
Stop by Huelo.
This is a great side trip to see some of Maui's history. Down the road lies a hidden Hawaii of an earlier time, where an indescribable sense of serenity prevails. Hemmed in by Waipo and Hoalua bays is the remote community of Huelo, which means "tail end" or "last." This fertile area once supported a population of 75,000; today only a few hundred live in the scattered homes here. Stop in at the historic 1853 Kaulanapueo Church.

Photo Caption: A view from the cliff's edge in Huelo, Maui 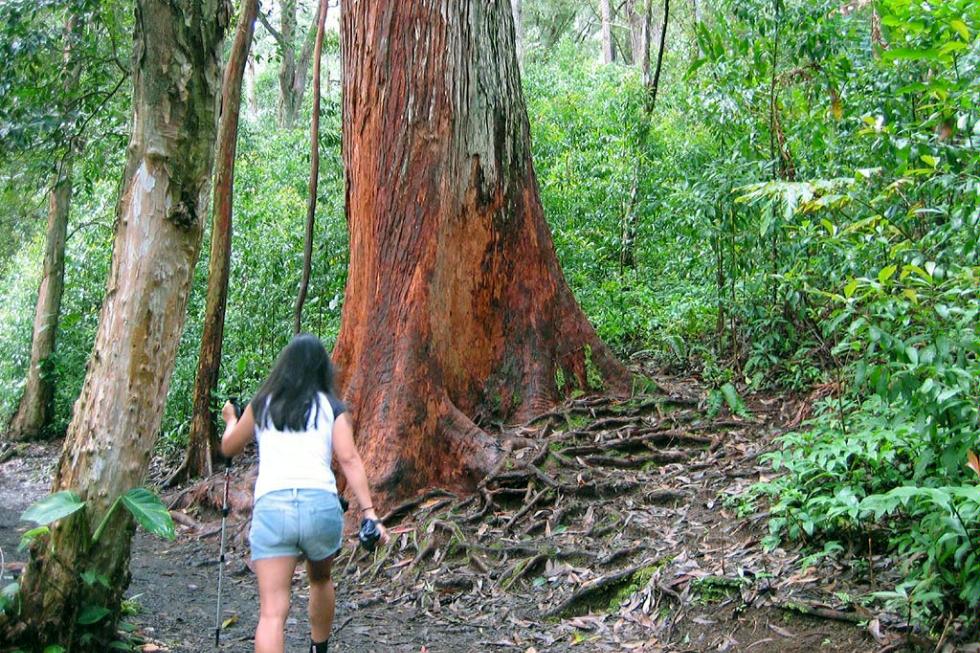 charchen
Hike at Waikamoi Ridge.
This small state wayside area with restrooms, picnic tables, and a barbecue area has an easy ¾-mile loop trail hike. It starts just behind the quiet: trees at work sign. 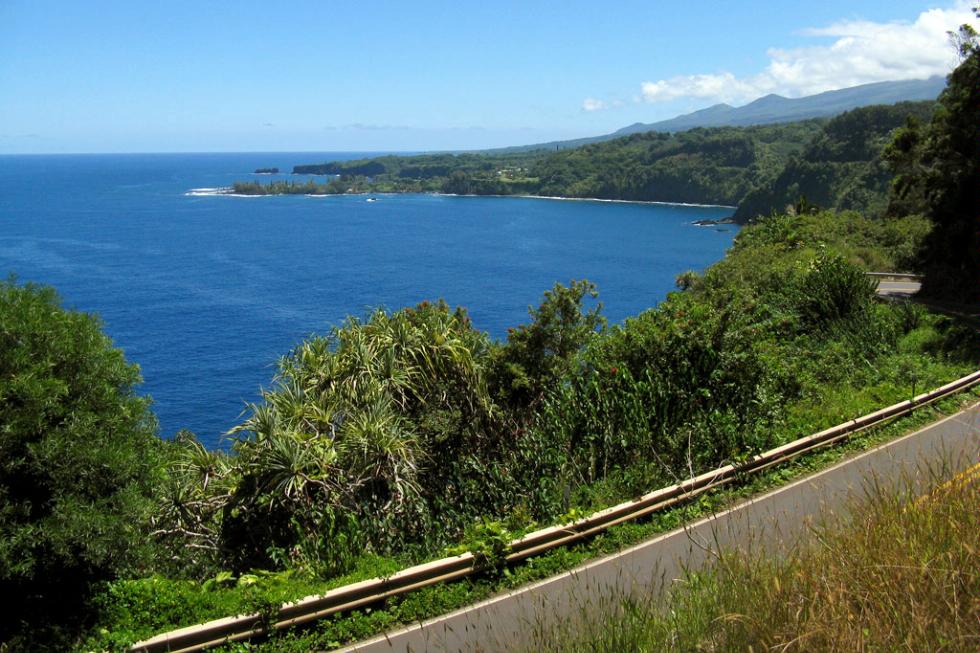 masteryofmaps
Enjoy a picnic at Kaumahina State Wayside Park.
This is a good pit stop (with restrooms) and a lovely place for a picnic. It also offers wonderful views and a great photo op of the rugged coastline all the way down to the jutting Keanae Peninsula.

Photo Caption: A view from Kaumahina State Wayside Park on the Road to Hana in Maui 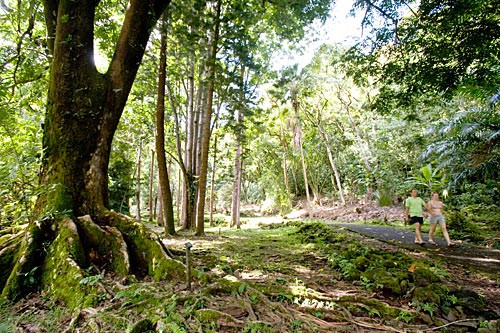 Ryan Siphers
Get closer to nature at Keanae Arboretum.
Here the region's botany is divided into three parts: native forest; introduced forest; and traditional Hawaiian plants, food, and medicine. You can swim in the pools of Piinaau Stream or press on along a mile-long trail into Keanae Valley, and a tropical rain forest.

Photo Caption: Commune with nature on a 2-mile hike through the Keanae Arboretum, which is packed with both native and introduced plants. 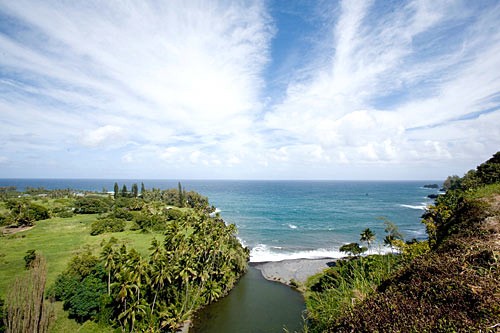 Ryan Siphers
See Keanae Peninsula.
The old Hawaiian village of Keanae (the mullet) stands out against the Pacific like a place time forgot. It's one of the last coastal enclaves of native Hawaiians, who still grow taro in patches and pound it into poi, pluck opihi (limpet) from tide pools along the jagged coast, and cast throw-nets at schools of fish. Be sure to see the Keanae Congregational Church, built in 1860 of lava rocks and coral mortar.

Photo Caption: The peninsula that hosts the Keanae Lookout was created by volcanic lava flows that shaped its craggy coastline. 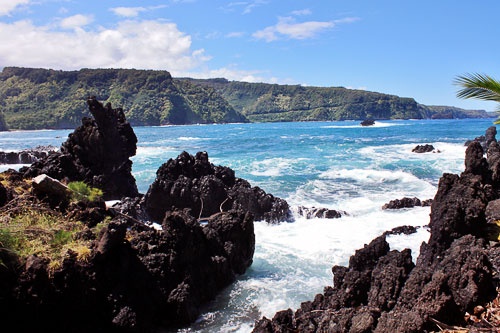 Hillary Richard
Enjoy the view from Keane Lookout.
Get out your camera: From this spot you can see the entire Keanae Peninsula's checkerboard pattern of green taro fields and its ocean boundary etched in black lava. The peninsula was created when an eruption of Haleakala flowed through the Koolau Gap and down Keanae Valley, adding this geological punctuation to the rugged coastline.

Photo Caption: The cliffs of the Hana Highway as seen from Keanae in Maui, Hawaii 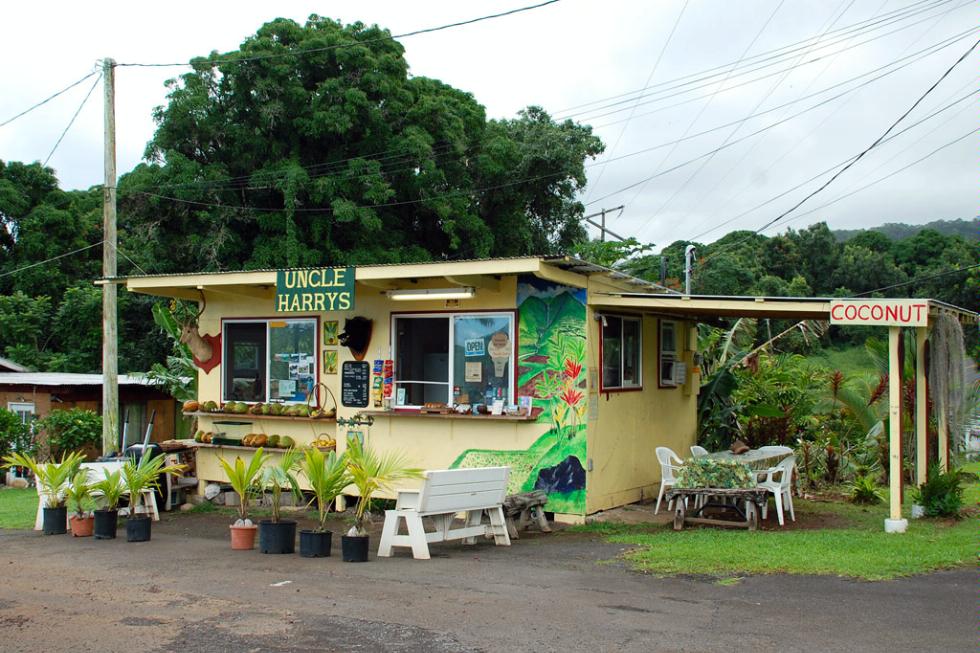 peyri
Sample the fruit stands.
You'll start to see numerous small stands selling fruit or flowers. Many of these stands work on the honor system: You leave your money in the basket and select your purchase. A favorite is Uncle Harry's; his family sells a variety of fruits and juices here Monday through Saturday.

Photo Caption: Uncle Harry's Fruit and Flower Stand on the road to Hana in Maui 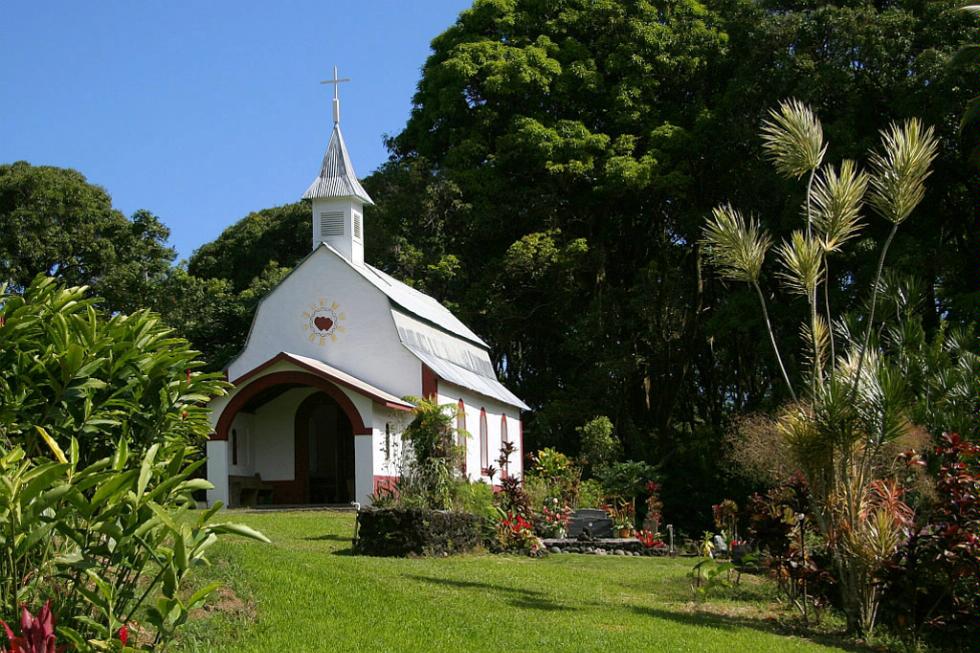 cattle_class
Admire the churches of Wailua.
This road will take you through the hamlet of homes and churches of Wailua. Behind the pink St. Gabriel's Church is the smaller, blue and white Coral Miracle Church, home of Our Lady of Fatima Shrine.

According to legend, in 1860 the men of this village were building a church with stone made from offshore coral. But the coral was in deep water, and the men could only dive for a few pieces at a time, making the construction of the church an arduous project. A freak storm hit the area and deposited the coral from the deep onto a nearby beach. The Hawaiians gathered what they needed and completed the church. Afterward, another freak storm hit the area and swept the remaining coral back out to sea.

Photo Caption: The Coral Miracle Church on the Road to Hana in Wailua, Maui 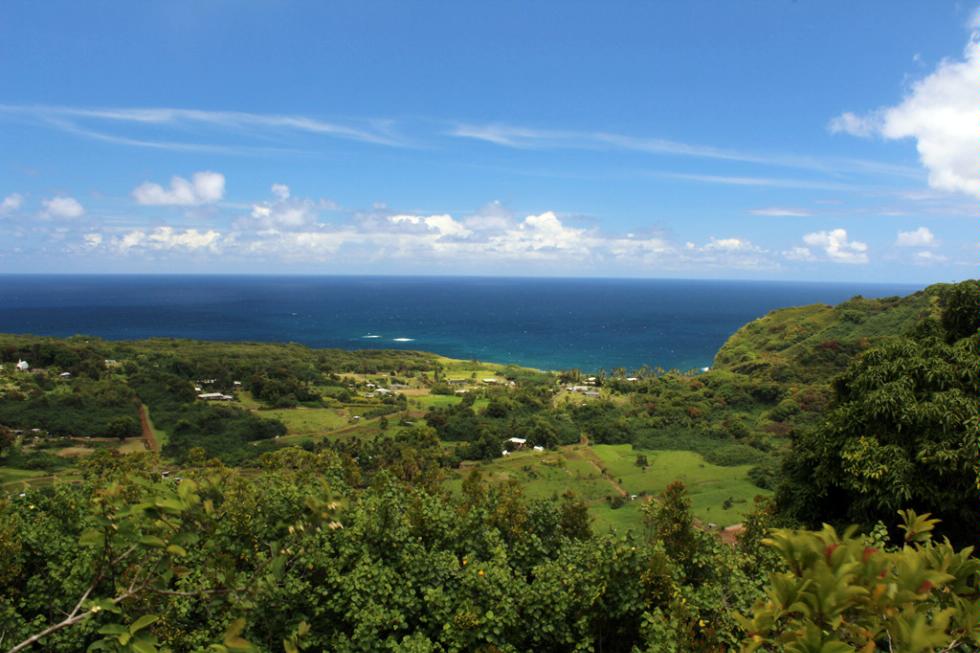 masteryofmaps
Visit Wailua Valley State Wayside Park.
Climb up the stairs for a view of the Keanae Valley, waterfalls, and Wailua Peninsula. On a really clear day, you can see up the mountain to the Koolau Gap. 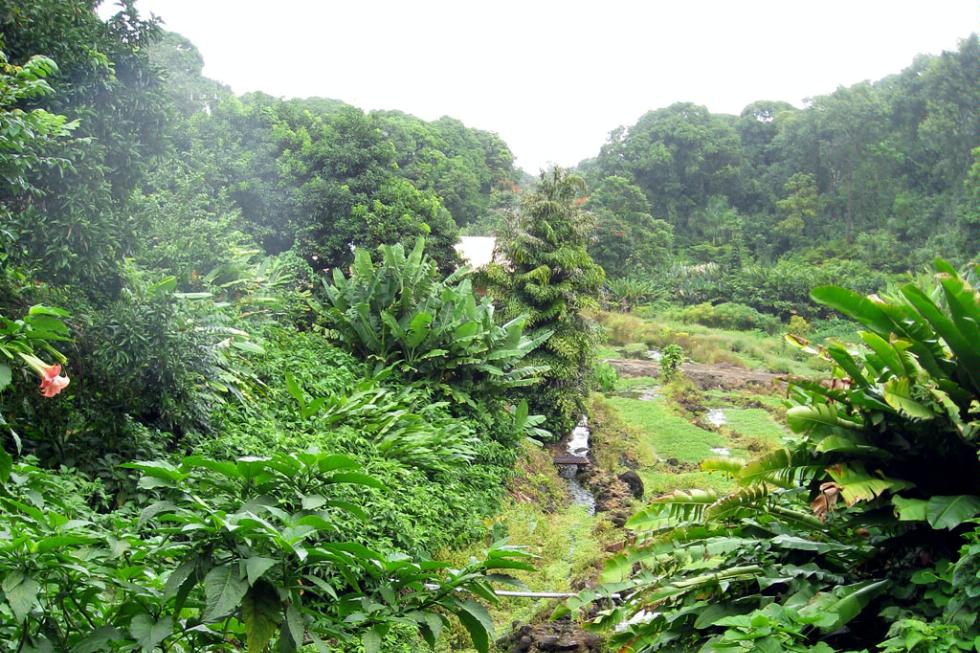 eage-talu
See the waterfalls at Puaa Kaa State Wayside Park.
The sound of waterfalls (Puaa Kaa means "open laughter") provides the background music for this small park area with restrooms, a phone, and a picnic area. A well-marked path takes you to the falls and a swimming hole. There are ginger plants everywhere: Pick some flowers and enjoy their sweet smell as you travel. 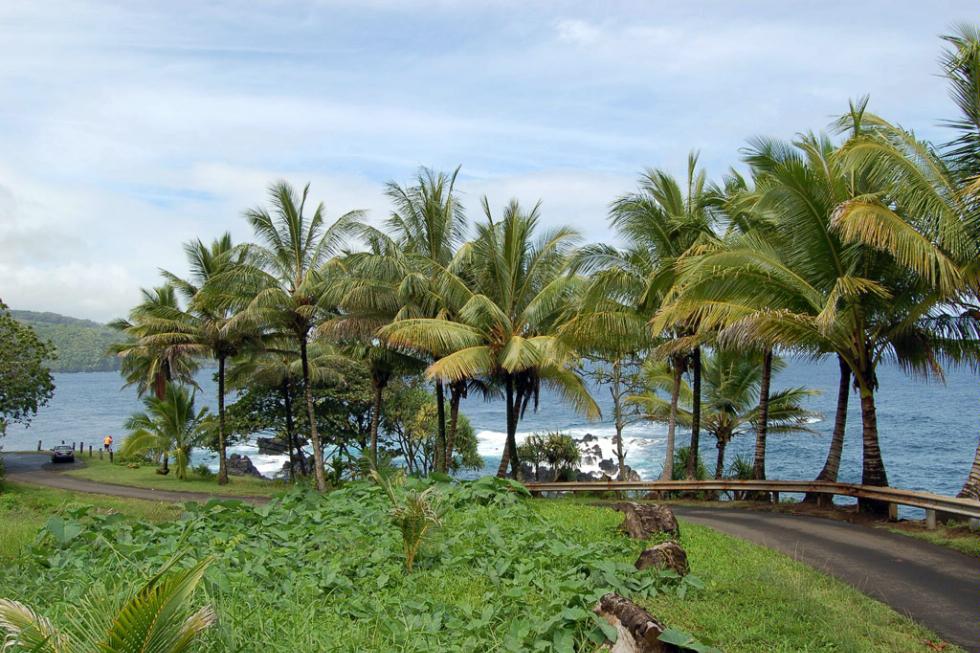 jdegenhardt
End at Nahiku.
At one time this was a thriving village of thousands; today the population has dwindled to fewer than a hundred -- a few Hawaiian families, but mostly extremely wealthy mainland residents who jet in for a few weeks at a time to their luxurious vacation homes. At the end of the road, you can see the remains of an old wharf from the town's rubber plantation days (and there are still some rubber trees along the road). There's a small picnic area off to the side, from which you may spot dolphins in the bay.

Photo Caption: The end of the Road to Hana in Nahiku, Maui
Arts and Culture
Beach & Water Sports
Road Trips