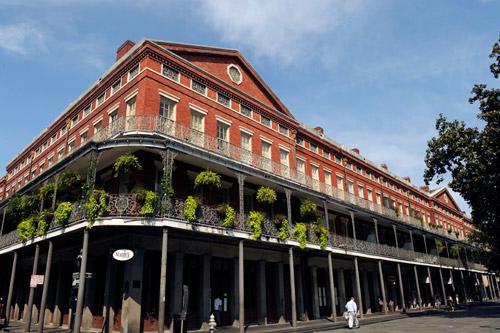 By
Walking Tour of New Orleans
By Diana K. Schwam

From Ernest Hemingway to Anne Rice, authors have found inspiration in New Orleans. This leisurely walking tour of the French Quarter highlights 10 famous literary landmarks. You may even be inspired to read (or write) a few words of your own.

Photo Caption: One of the Pontalba buildings on Jackson Square 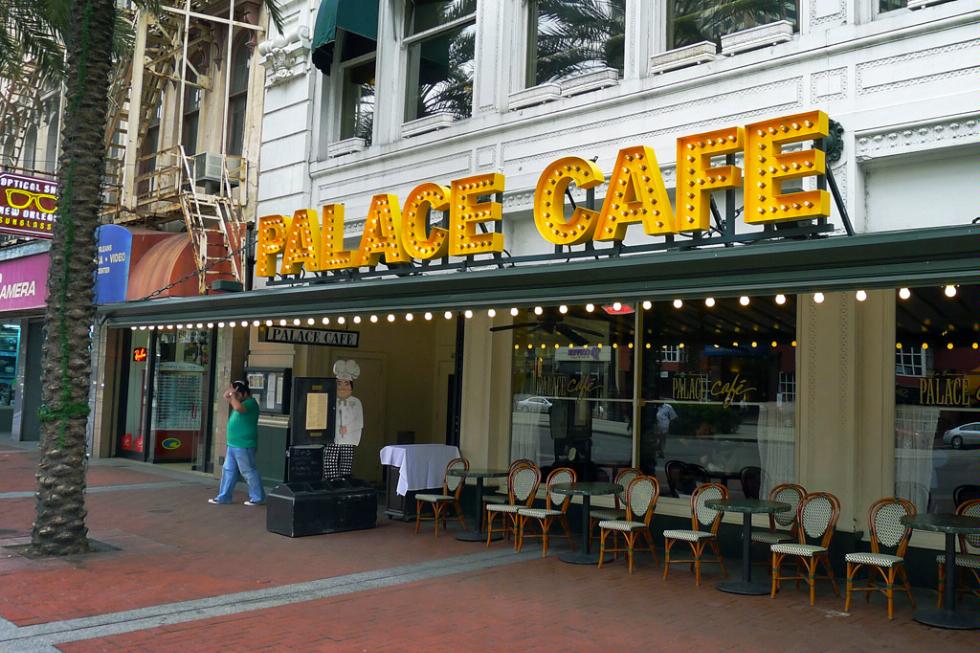 Mark Twain, though associated more closely with rural Louisiana, said that Canal Street was "finer and more attractive and stirring than formerly, with its drifting crowds of people, its several processions of hurrying street cars, and -- toward evening -- its broad second-story verandahs crowded with gentlemen and ladies clothed according to the latest mode." The wide avenue, once the dividing line between the segregated French Quarter and the American District, has seen better days (and may see them again soon enough, as a rebirth is under way). But if you can look beyond the neon to the "bones" of the grand old buildings, it will reveal its charms.
advertisement 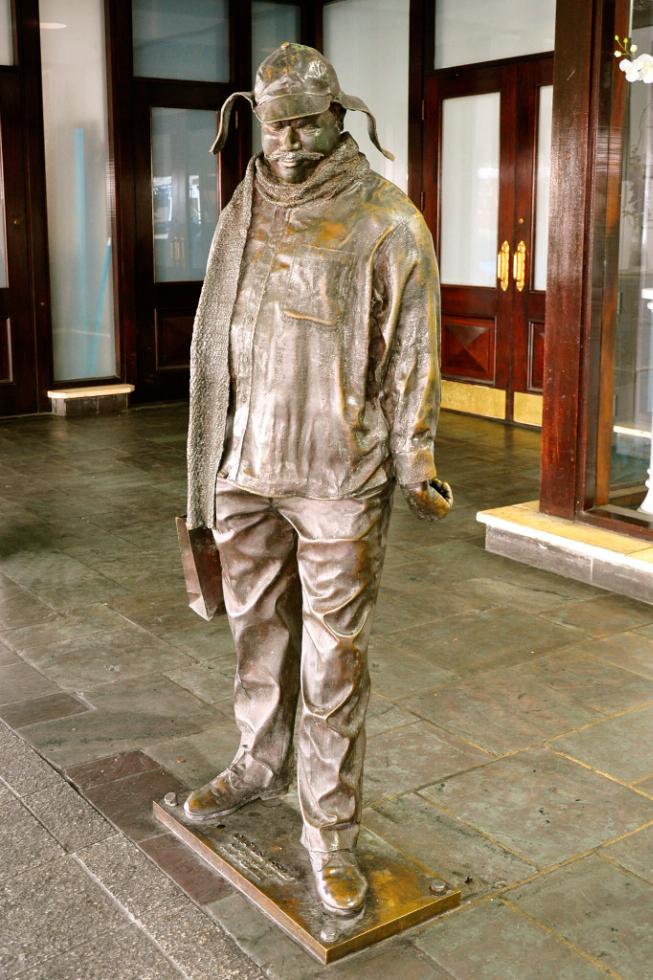 kimberlykv
Ignatius Reilly Statue
Where: 819 Canal St. between Bourbon and Dauphine Streets, at entrance to the Hyatt French Quarter Hotel.

John Kennedy Toole's A Confederacy of Dunces went unseen until 11 years after his 1969 suicide. In the interim, his mother tirelessly shopped the manuscript, eventually finding a champion in Walker Percy. Recognizing its genius, Percy had it published -- only to see it go on to beat one of his own books for a Pulitzer. Some believe that idiosyncratic Ignatius Reilly, the indolent, urbane protagonist now immortalized in bronze, epitomizes many a French Quarter character.

Photo Caption: The statue of Ignatius Reilly, who was the protagonist of John Kennedy Toole's A Confederacy of Dunces in New Orleans, Louisiana 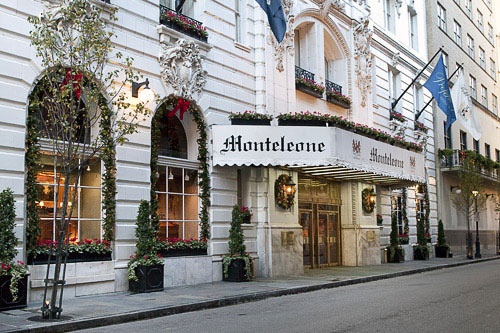 The venerable Hotel Monteleone might be considered ground zero for New Orleans' best-known literati. Among those who stayed, wrote and/or drank here? Hemingway, Faulkner, Tennessee Williams, Anne Rice, Eudora Welty, and John Grisham. Don't miss the window display of famous books penned here (just inside the front doors as you enter the lobby), and try a classic Sazerac cocktail when you take a spin on the slow-turning Carousel bar. 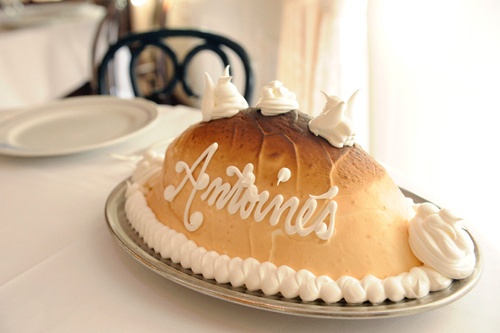 Author Frances Parkinson Keyes wrote prolifically about Louisiana, and found her biggest success with the murder mystery Dinner at Antoine's. One step inside and it's easy to see why locals and visitors have dined at Antoine's since 1840. In truth, you don't come for the old-school cuisine -- you come for the history, which seems to seep from the white tile floors and the memorabilia-covered walls. Leave room for the Baked Alaska dessert, a ridiculous frivolity served with equal panache. 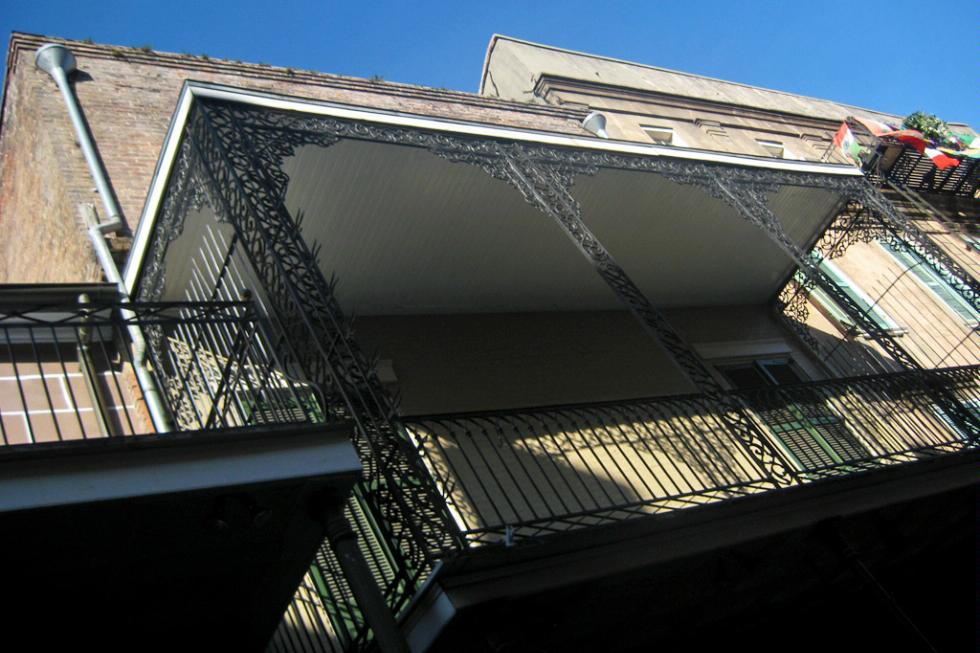 Despite the (pen) name, Tennessee Williams may be the literary figure most closely associated with New Orleans, which the native Missourian considered his spiritual home. After a brief stay on Royal Street, he lived in an attic apartment on Toulouse Street (1938-1939) and began to take on the artsy, free-wheeling French Quarter lifestyle. His surly landlady famously poured scalding water through the floorboards onto the boisterous revelers downstairs, resulting in brawls, arrests, and years later, a suspiciously similar scene in Williams' Vieux Carre.

From his St. Peter Street residence (1946-47), Williams could hear that "rattle trap streetcar named Desire running along Royal and the one named Cemeteries running along Canal, and it seemed the perfect metaphor for the human condition." We all know what resulted.

In his later years, he purchased the townhouse at 1014 Dumaine Street, where he wrote his memoirs and in which he "hoped to die in my sleep, in this beautiful big brass bed in my New Orleans apartment …" 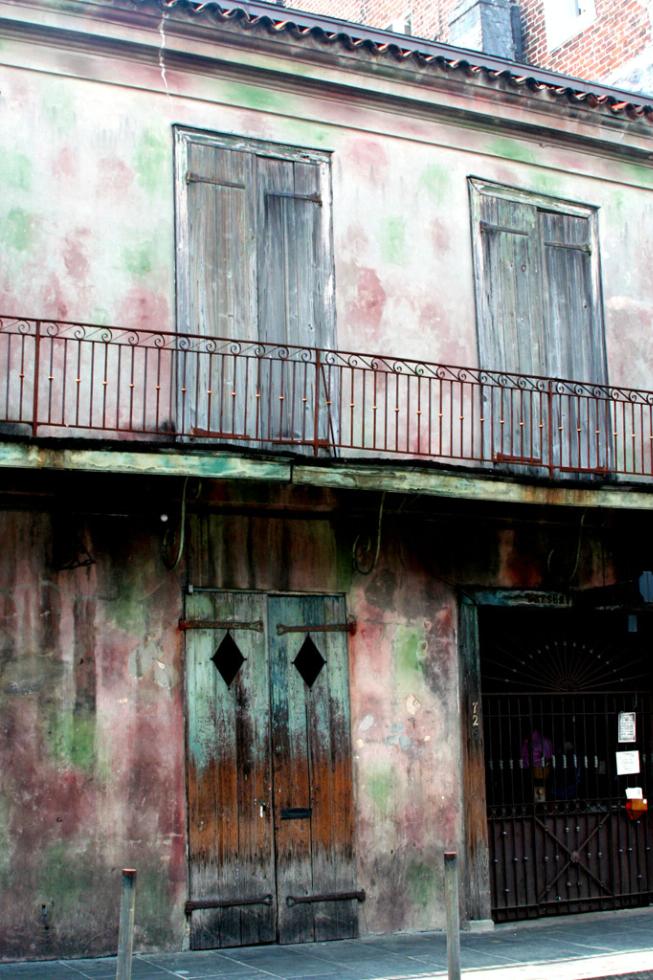 If you're like many travelers, you'll read up on your destination before you go. Since New Orleans is the birthplace of jazz, so why not start with Tom Sancton's moving Song for my Fathers? This memoir focuses on a white boy's obsession with traditional jazz in a pre-civil rights era, and the black musicians who nurtured it. Then visit the Preservation Hall jazz club, where Sancton learned from the masters, and where they still play every night -- nurturing yet another generation of apprentices and admirers. 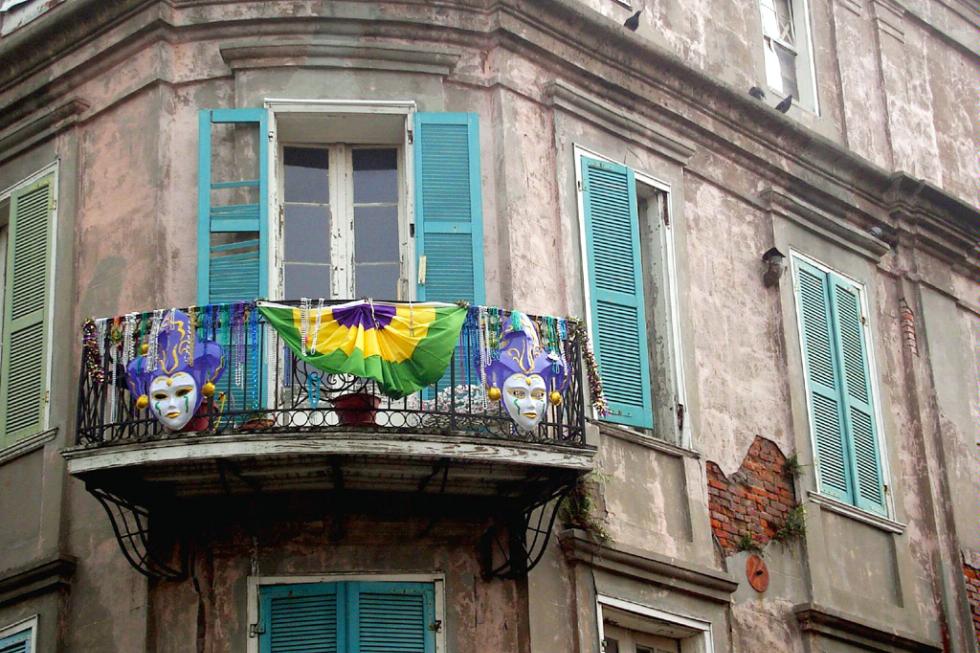 katedahl
The Skyscraper Building
Where: 640 Royal St., at the corner of St. Peter St, and 638 Royal St.

In addition to its architectural significance (it's said to be the first four-story building in the French Quarter), Le Monnier Mansion also looms large in the city's literary history. George Washington Cable lived and set his 1873 story, "Sieur George" here, propelling his tales of Creole lifestyle to great success (and his progressive views to controversy). He described the building: "With its gray stucco peeling off in broad patches, it has a solemn look of gentility in rags, and stands, or as it were, hangs, about the corner of two ancient streets, like a faded fop who pretends to be looking for employment."

Photo Caption: Le Monnier Mansion, or The Skyscraper Building, at the corner of St. Peter Street and Royal Street in New Orleans
advertisement 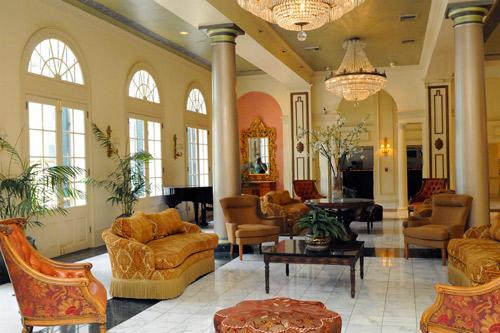 From 1861-1960, the Bourbon Orleans Hotel was a convent housing the Sisters of the Holy Family, the oldest female-led African-American order in America. In the early 19th century, it's believed that the Quadroon Balls were held in the upstairs ballroom. In a system known as "placage," wealthy Frenchmen were introduced to potential mistresses who were one quarter African-American (aka "Quadroons"). Arrangements for financial support, education, and housing were reached, and these socially accepted relationships often lasted lifetimes. Accounts of these customs appear in many books, notably Anne Rice's Feast of All Saints, Isabel Allende's Island Beneath the Sea, and Old Creole Days by George Washington Cable. 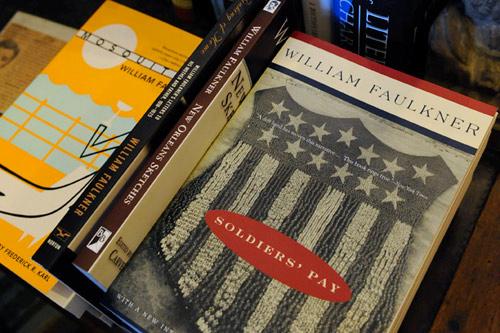 No bibliophile should miss this former home of William Faulkner, Nobel and Pulitzer prize-winning author. Faulkner lived, wrote, and entertained here in the 1920s during the height of French Quarter bohemia. The current owners have lovingly restored this 1840 townhome, turning the first floor into one of the premier independent bookstores in the country, Faulkner House Books. An elegantly curated collection of first editions, rarities, and contemporary literature adorns the floor-to-ceiling shelves of this American Literary Landmark. 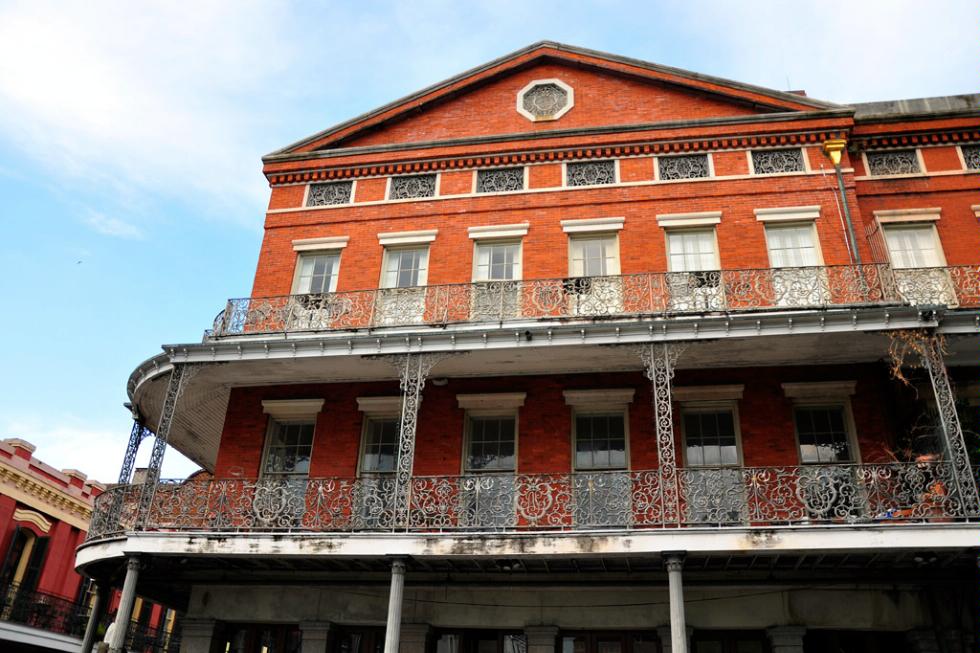 kimberlykv
The Pontalba Apartments
Of the mid-1920s New Orleans salons, perhaps none was so elegant (if short-lived) than that of Sherwood Anderson. Somerset Maugham, Edna St. Vincent Millay, Carl Sandburg, William Faulkner (whom Anderson mentored) and others congregated in the Pontalba parlor overlooking Jackson Square. It is likely that some of the works which appeared in the Double Dealer originated here. This literary journal, founded to improve the reputation of the oft-maligned Southern culture, published many eminent writers (like Hemingway, who later satirized Anderson mercilessly). It succeeded in bringing acclaim to the emergent American modernist literary movement and gave rise to the Southern Review. For more on the history (and excellent scandals) of the Pontalba Apartments, visit the 1850 House (523 St. Ann St., along the other side of Jackson Square).