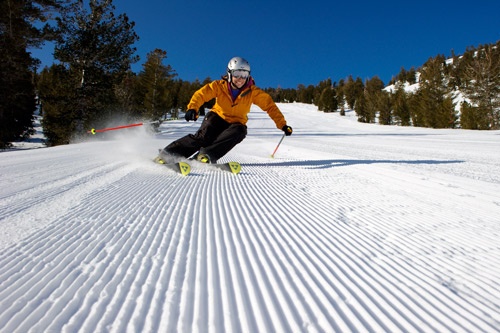 By Frommer's Staff
The leaves are turning and the days are getting shorter. That means just one thing: The first ski trip is just a wax job and a blizzard away. Whether you're a gear junkie, gym rat or powder hound, it's time to warm up to the idea of winter before the snow really starts to fall. But if you aren't quite ready for winter, here are a few preseason tips and preparatory ideas to get ready for skiing and snowboarding in what hopefully will be a season packed with powder days. 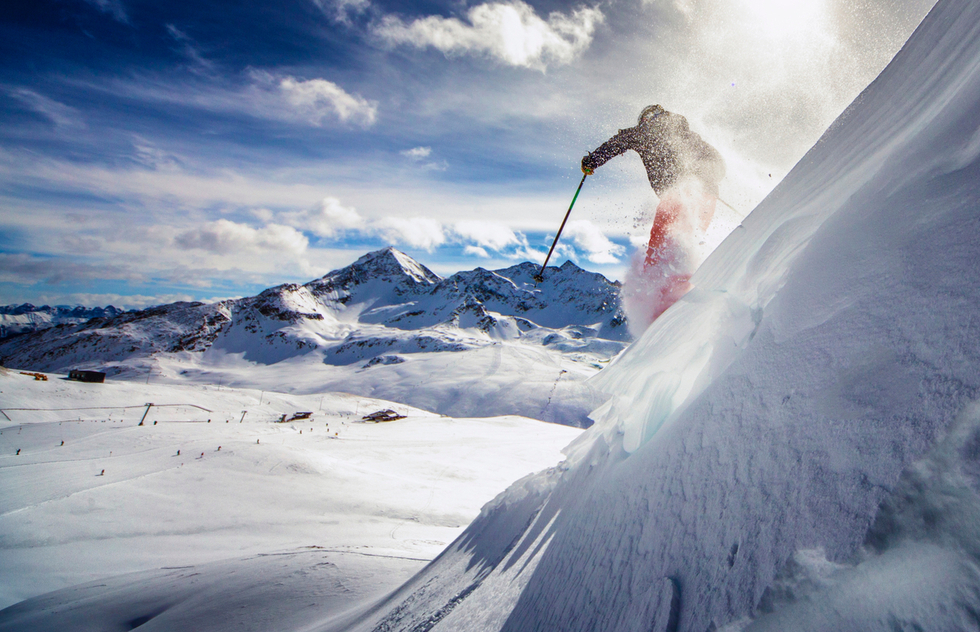 Two passes cover the vast majority of ski resorts in the U.S., Canada, and Europe, and both try to encourage pre-season buys by slashing prices if you purchase before a flake of snow has fallen.

When compared with simply arriving at a resort and paying the walk-up price, both passes pay for themselves within 3 to 5 days of skiing (the amount will vary by resort, and type of pass).

The Epic Pass covers skiing at some of the (yes) most epic ski resorts in North America including Vail, Whistler/Blackcomb (pictured above), Stowe, Park City, Telluride, Sun Valley, and others. Along with passes that will allow you to ski anywhere within its system, Epic also has regional passes and time-limited passes (for folks who know they won't be skiing for more than, say, 5 days in a season).

Specialized passes are also available for seniors, students, folks with disabilities who do adaptive skiing, members of the military, and other groups. Epic Pass also offer discounts on lodging, lessons, rentals, and more.

The Ikon Pass covers Snowmass, Taos, Jackson Hole, Alta, Killington, Revelstoke, Kitzbühel (in Austria), Zermatt Materhorn (Switzerland) and others. It has similar options to those offerred by Epic, but it offers fewer additional discounts on lodgings and the like. 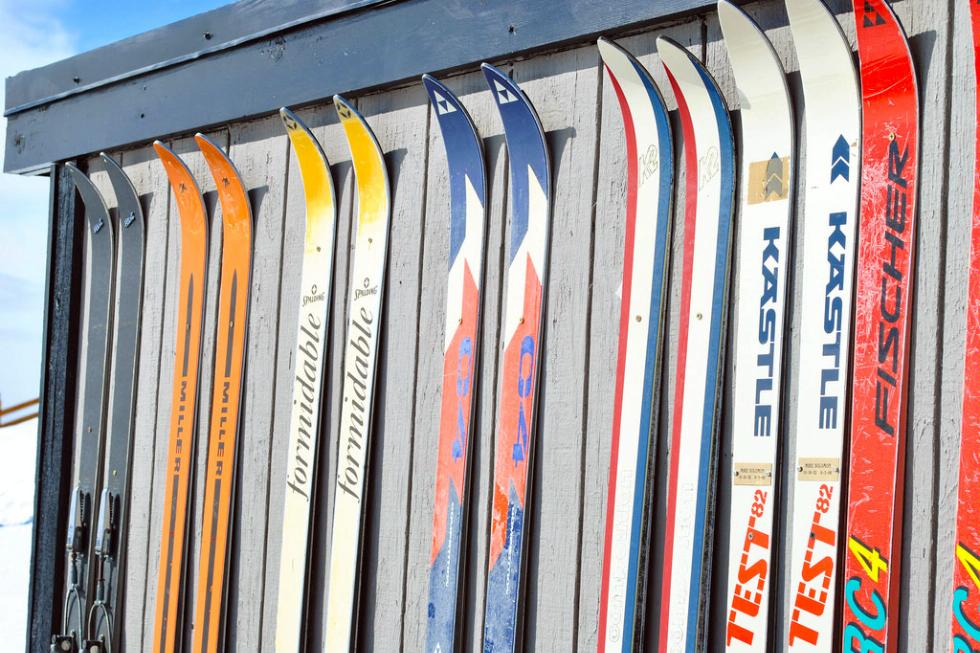 colletsantacruz
2. Consider Buying Used Gear
If you're serious about skiing, using secondhand gear can replace rentals. Never, ever buy a used helmet—that's just a bad idea, safety-wise (in fact, many doctors recommend getting a new helmet every five years).

For skis, limit your search to ones from the last two or three seasons. If they're older than that, they're more likely to have unseen internal damage. You don't want to risk it.

Boots are an easier buy because they don't get as badly damaged as skis. If the idea of someone else's sweaty feet grosses you out, buy new liners.

For clothing: Check if garments are still waterproof by dousing them with water. If the liquid soaks the fabric instead of beading up, you may have to invest in a sealant (like Nikwax or GearAid).

Among the websites where you can shop for at-your-own-risk used gear are community standbys like Craigslist and NextDoor. But there's no guarantee of quality there. We'd suggest that you look instead at sites like New Schoolers, Evo, or the local ski gear store in a near-mountain town.

Photo: a line of skis in Jackson Hole, Wyoming 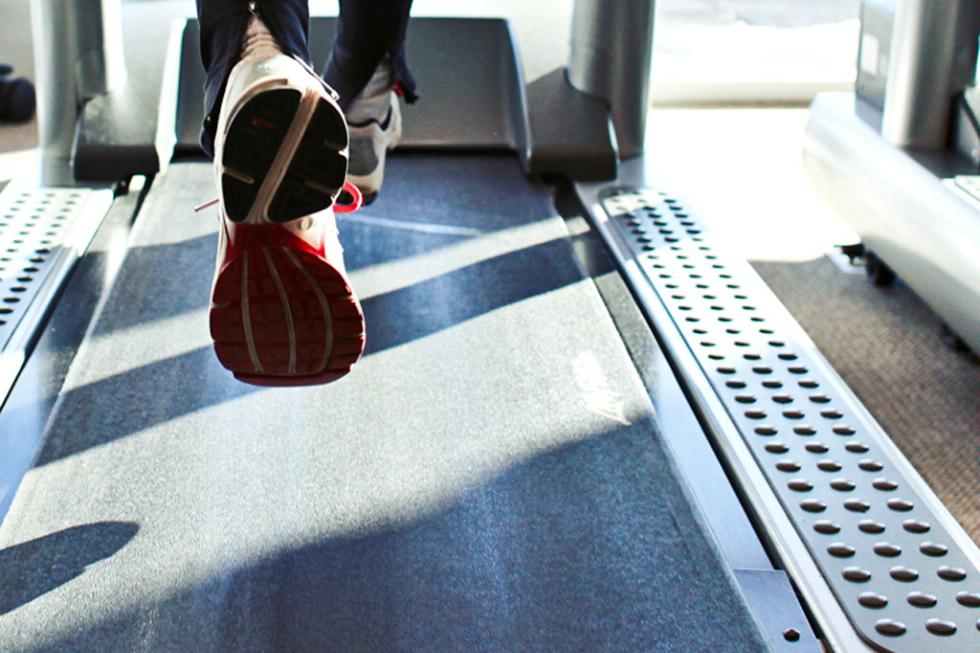 eccampbellphotography
3. Hit the Gym
In ski towns, local gyms often offer ski-specific exercise classes and programs to get those ski legs ready for the slopes before it really starts snowing. Elsewhere there is no reason skiers can't put together their own ski-oriented workouts. Running, rollerblading, and using the elliptical machine are all good general ski-prep cardiovascular workouts. Squats and lunges help strengthen those all-important quadriceps, while step-ups and deadlifts will help beef up hamstrings and glutes, likewise critical for maintaining good form on the slopes. Additionally, core-strengthening exercises such as planking and bicycling are highly recommended. 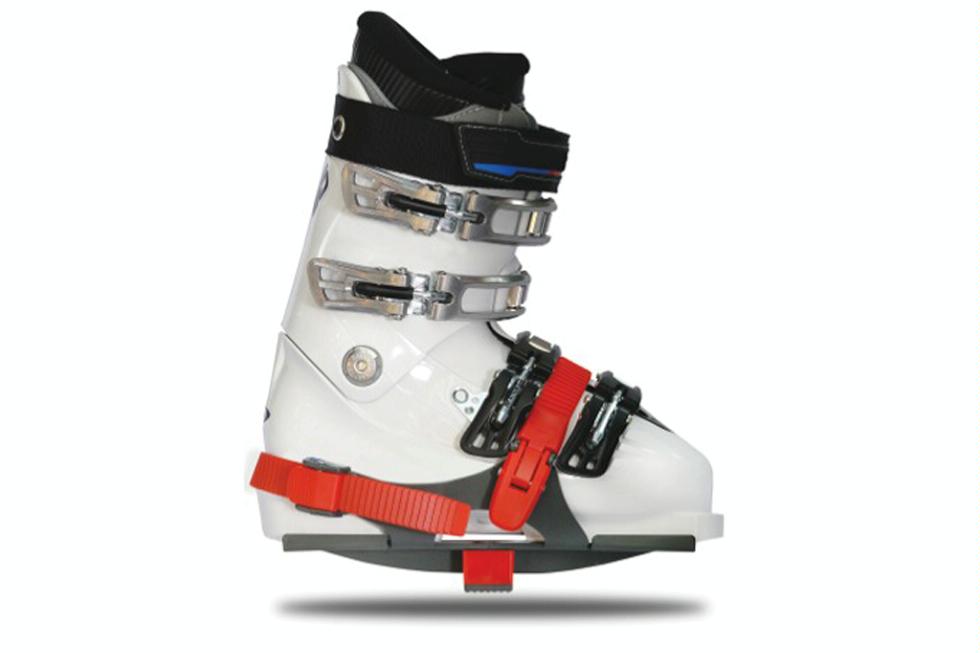 SkiA Designs
4. Try the Sweetspot Trainer
The SkiA Sweetspot Trainer is one of the few products on the market designed for keeping one's ski skills sharp during the summertime. Consisting of a pair of devices that strap onto the user's ski boots, the Sweetspot Trainer features interchangeable blocks that simulate the "sweet spot" for a skier's center of gravity. Once a skier learns the sweet spot's location, they can work on making a whole range of different moves while maintaining balance. Retail price is about US$70. 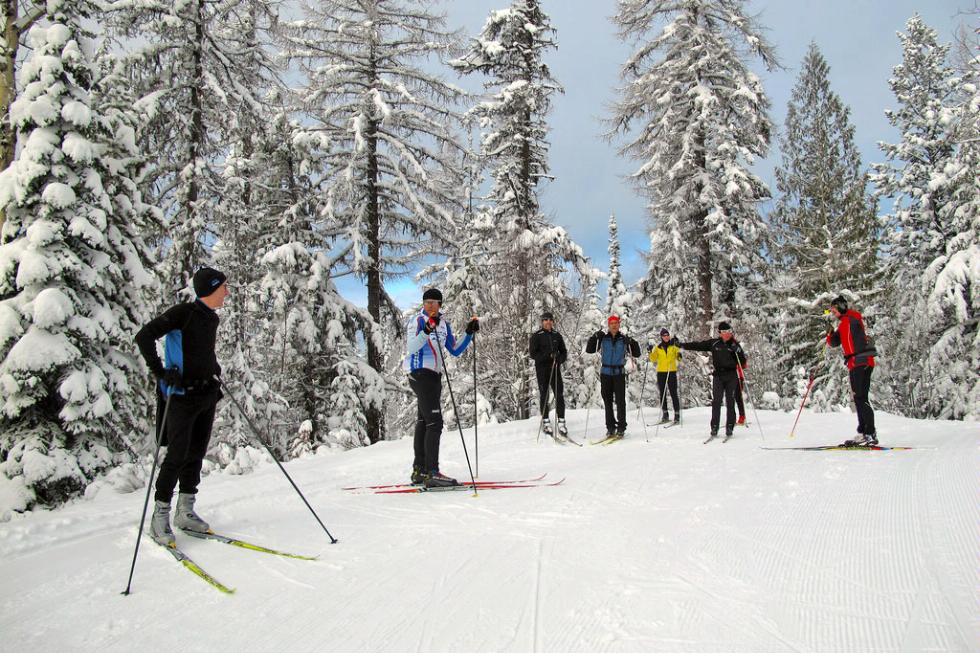 nhunt
5. Start off the Season with a Refresher Lesson
No matter how long one has been on skis or a snowboard, there are plenty of reasons for a refresher lesson at the outset of the season. Besides catching bad habits at their most malleable and giving thinking points for the season ahead, and whether the goal is to shake the rust off or polish an already advanced product, there are a wide range of general lessons as well as clinics that target a specific skill, such as mogul skiing or backcountry preparedness. Many resorts offer package deals pairing lessons with lodging. 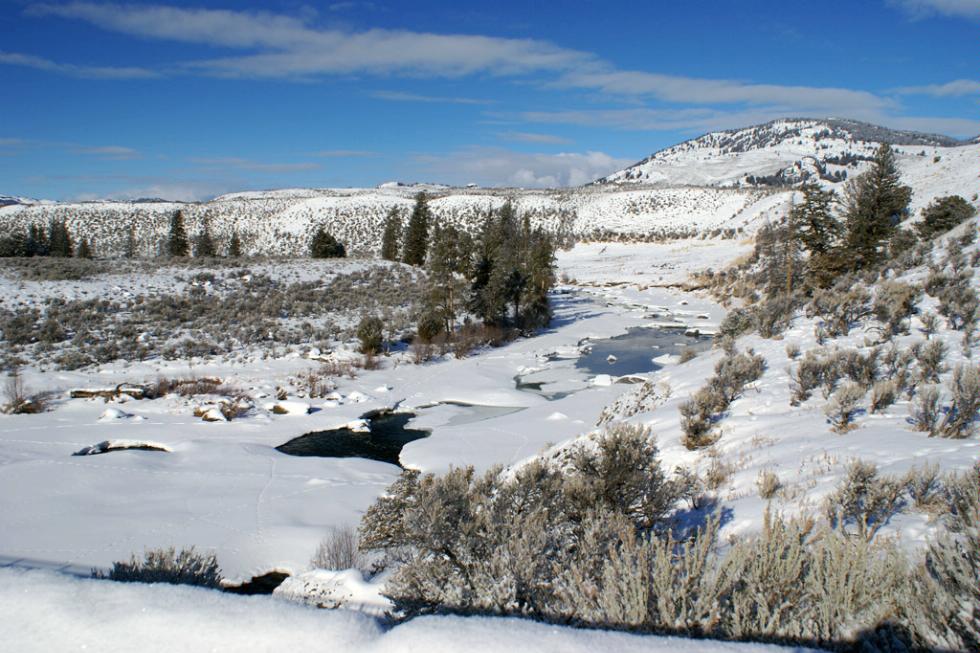 Frommers.com Community
6. Plan a Winter Visit to a National Park
Forget the glitzy ski resorts. The true soul of winter is more easily found in the national parks of the West. Only a few resorts have lift-served downhill skiing, but the peace and quiet of winter is probably best experienced on cross-country skis or snowshoes. Take Yellowstone. In winter, it feels as if you have the park to yourself, the wildlife and geysers are as visible as ever, and the snow-frosted views are spectacular. Meditate on the Grand Canyon of the Yellowstone with a fresh winter coat, and you'll find wintertime zen in no time. 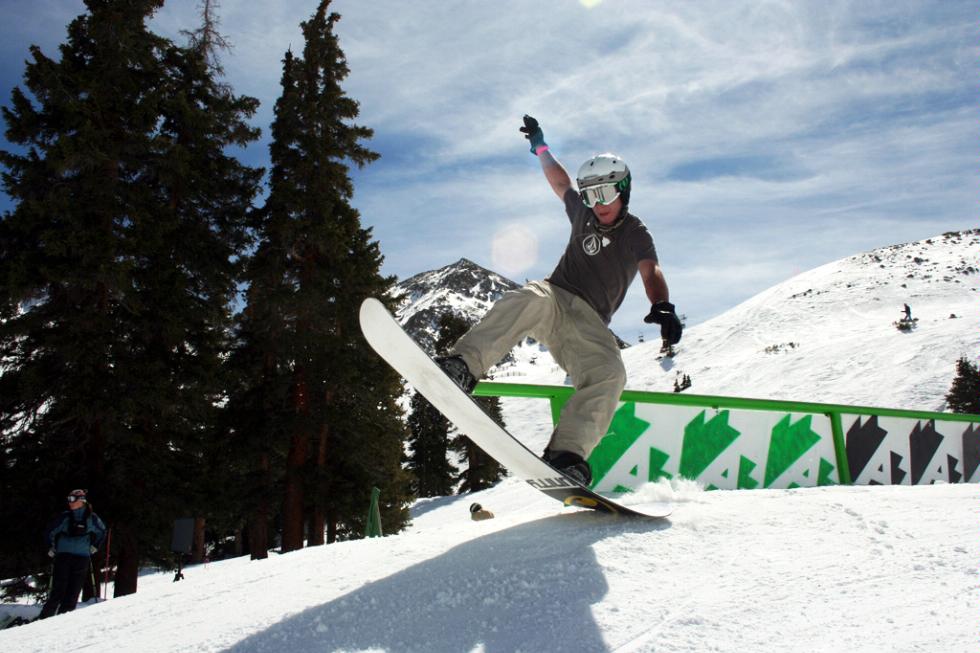 shayhaas
7. Get off the Beaten Path
Sure, the big-name marquee resorts are fun to cross off the bucket list, but skiers and snowboarders almost always get more bang for their buck at the smaller local resorts. Not only are these mom-and-pop resorts a better value, you'll find fewer skiers and shorter lift lines to boot, so it becomes easy to get more runs per ski day. And the personality of a dinky little ski hill more often than not outshines the brand-name resorts, where the latest and greatest condo developments diverts the focus from where it belongs: on the slopes.

The Indy Ski Pass covers a number of these smaller resorts in the U.S. and Canada (as well as in Japan), and can be a money saver. Crunch the numbers.

Photo caption: Snowboarding in the Arapahoe Basin in Colorado. 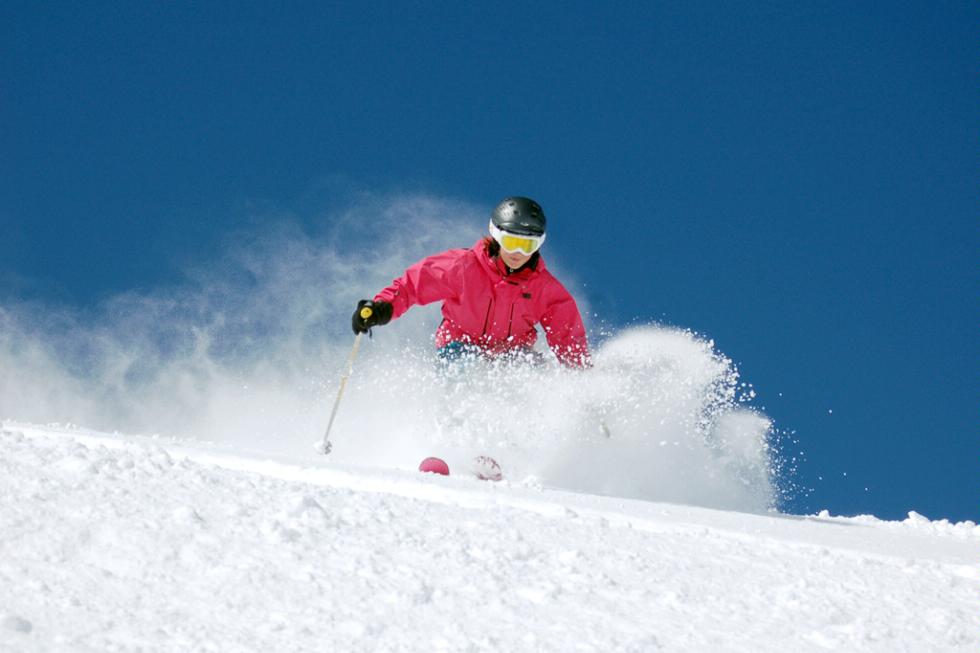 Alta Ski Area
8. Pray for Snow
In this time of climate change, it's time to pull out all of the stops and shift every last snow-centric superstition into overdrive. Do a crazy blizzard dance. Give tidings to Ullr, the Norse god of snow. Wash your car. (It always snows the day after you get it detailed.) Rub the snow buddha's belly. Or just send good vibes to the mountains...and the powerful snow-making machines many resorts are using to replace the nature-made powder. Can't hurt to try!
Family & Kids
National Parks
Winter Sports