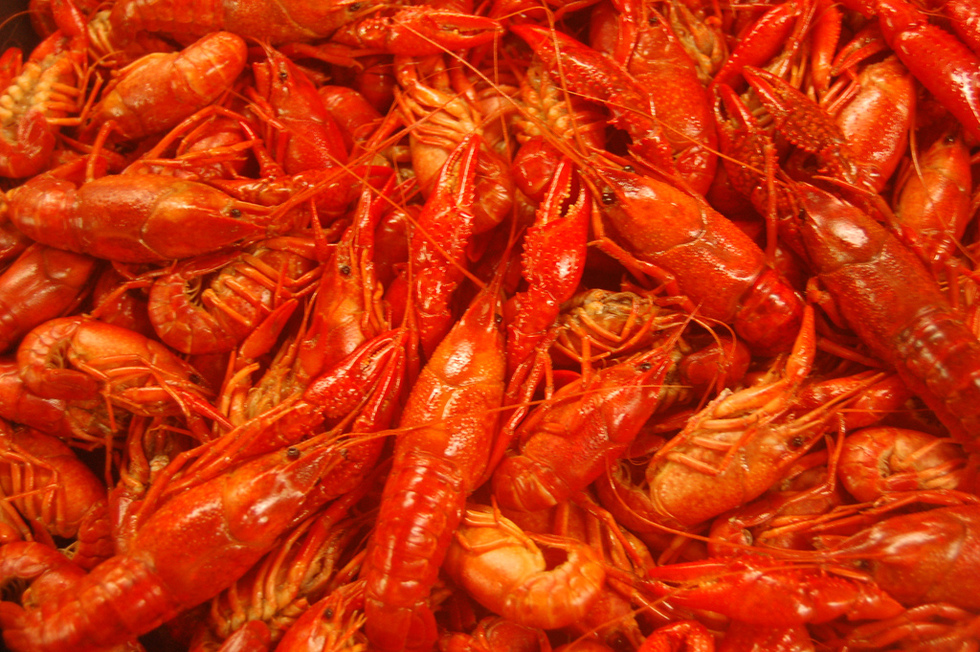 By
By Holly Daniels
No state in the Union can match Louisiana for the variety and inventiveness of its native cuisine. And that holds whether you're dining at a gas station that just happens to smoke its own sausage in the back room or at a white-tablecloth restaurant helmed by an award winning chef. That may be because the food here has such complex origins, influenced not just by Cajun and Creole traditions, but by the cuisines of Portugal, Spain, parts of Africa,and Native American fare. Though there much more to do here, many come to Louisiana just to gorge themselves silly....and they come away quite, quite satisfied. 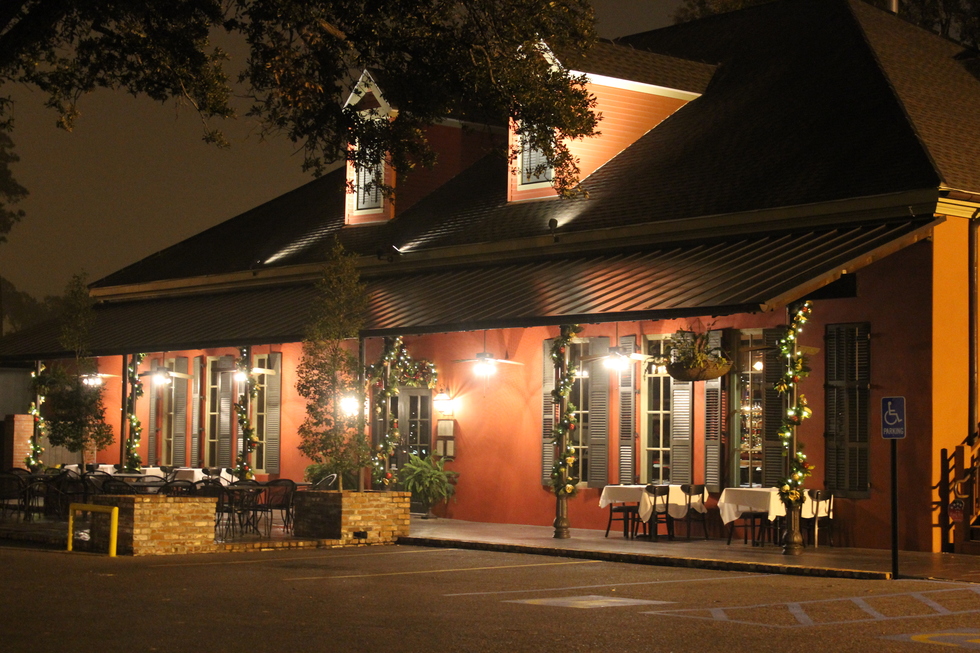 Jolie's Louisiana Bistro
Jolie's Louisiana Bistro, Lafayette
The quintessential farm-to-table restaurant, the food here is a sophisticated, highly inventive version of classic Creole cooking, and always super-fresh. Jolie's even cures its own charcuterie plate! Get reservations well in advance, as the word is out about Jolie's and not just in Lafayette: chef Manny Augello was invited not long ago to present his cuisine at the famed James Beard House in New York City. His dinner included hogs head cheese over roasted corn grits; and fried rabbit livers with siracha wild honey glaze and pickled onions, just to give you a "taste" of the types of food you might enjoy at Jolie's. Never fear, you can also get such "simpler" food as grilled pork chops with foraged mushrooms or "Crawtator Crusted Louisiana Drum". We also like the warm, romantic feel of the place.
advertisement 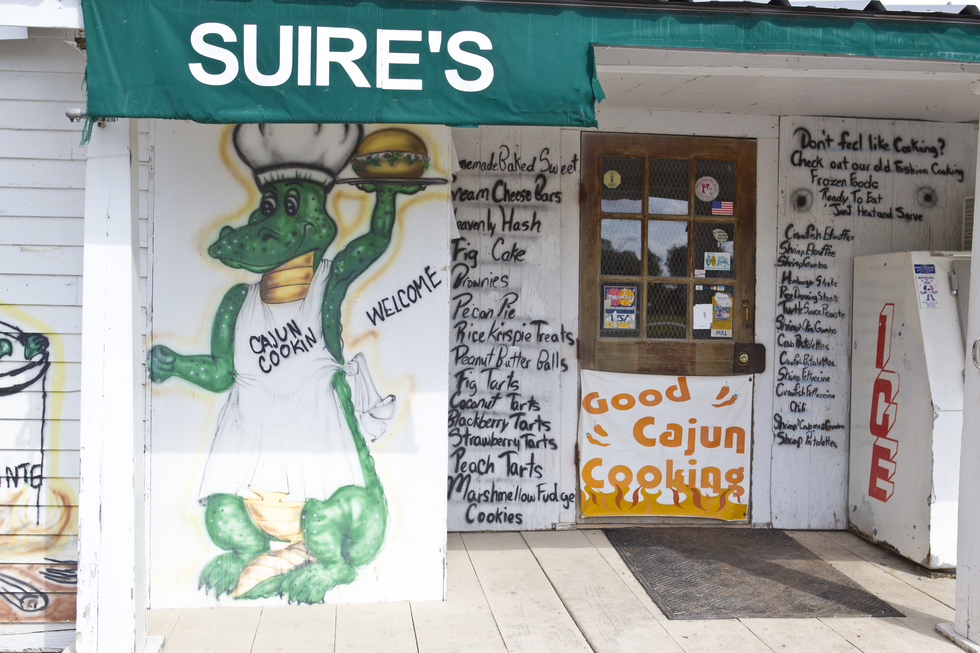 Dan Stevens
Suires Grocery and Restaurant, Kaplan
"If you want country cooking, come to the country!" That's the apt motto for this grocery-cum-diner that serves wonderfully authentic cajun food with a wide grin (the service here is as inviting as the food). As for the eats, its hard to go wrong with anything on the surprisingly extensive menu, but we'd suggest such regional classics as fig cake, boudin balls, brisket corn stew, turtle sauce piquante or crawfish pistolette (fried bread stuffed with crawfish). Yes, its off the beaten path, but that's part of the fun of dining here. To see the entire menu, to go the Suire's website. 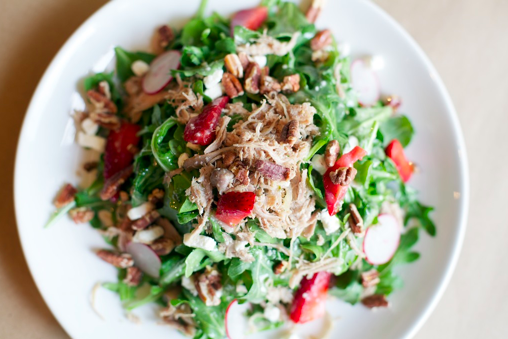 Jeff Conaway74/Flickr
Beausoleil, Baton Rouge
The foodie's choice in Baton Rouge, Beausoleil has the look of a casual bistro but a menu that's definitely 5-star. Expect such creative combinations as sauteed gulf fish with pecans, shrimp and artichokes; seared foie gras atop a homemade biscuit with a sunny-side up quail egg, crispy prosciutto and blackberry jam; or fried chicken livers with bacon jam and black-eyed pea hummus. There's also a wide variety of salads (like the one pictured above) for those watching their waistlines.
advertisement 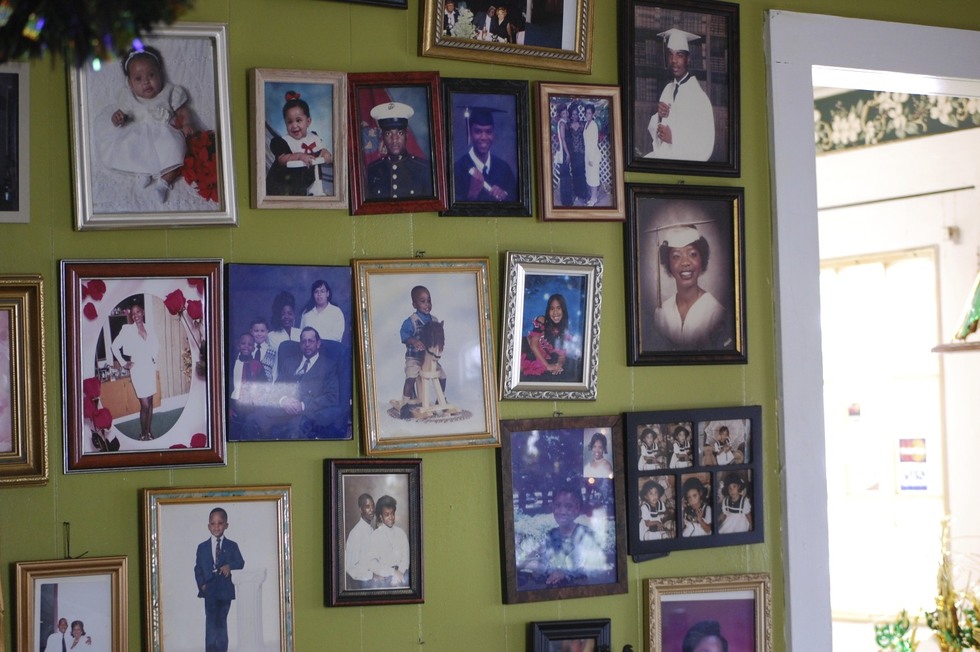 Southern Foodways Alliance (www.southernfoodways.org)
Brenda's Diner, New Iberia
Though it sounds cliched, even strangers quickly feel like family when they dine at Brenda's. How could they not, when all the members of Brenda's clan are staring at them from the walls (see above) of this cozy, unpretentious eatery. And the welcome you'll get from owner Brenda and her staff is amongst the warmest in the state (and that's saying a lot). But while that's all well and good the reason this tiny place is so popular can be summed up in three words: stellar soul food. Fried pork chops, candied yams, smothered cabbage, turkey necks, chicken stew, peach cobbler, red beans and rice--its all on the menu, but done so perfectly, you may feel like you're tasting an entirely new cuisine. We must give a special shout out to the utterly greaseless, crispy yet moist fried chicken--a revelation. 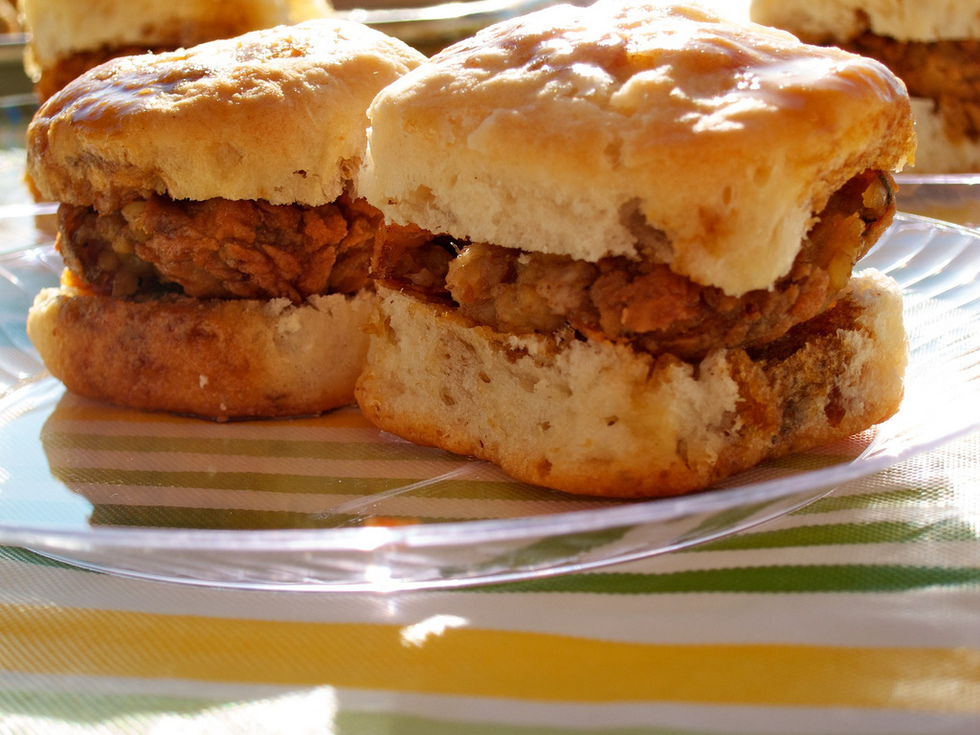 Mike Head/Flickr
French Press, Lafayette
Breakfast is the most important meal of the day when you're smart enough to take it at this hip and extremely popular cafe. In fact, it may be the most innovative meal of the day, too as owners Justin and Margaret Girouard have a knack for creating new classics. Like the "Cajun Benedict", a perfectly poached egg topped with gumbo rather than Hollandaise. Or the "Sweet Baby Breesus", the biscuit sandwich pictured above, filled with boudin sausage, bacon and Steers Cane Syrup--yum! Have a sweet tooth? Try the french toast stuffed with cream cheese and topped with a champagne-berry compote. Set in a high-ceilinged, shabby-chic former print shop (with artfully peeling walls, wooden tables and a handsome waitstaff), its also a great bet for lunch. Dinner's served on Friday and Saturday nights only. For more go to The French Press website.
advertisement 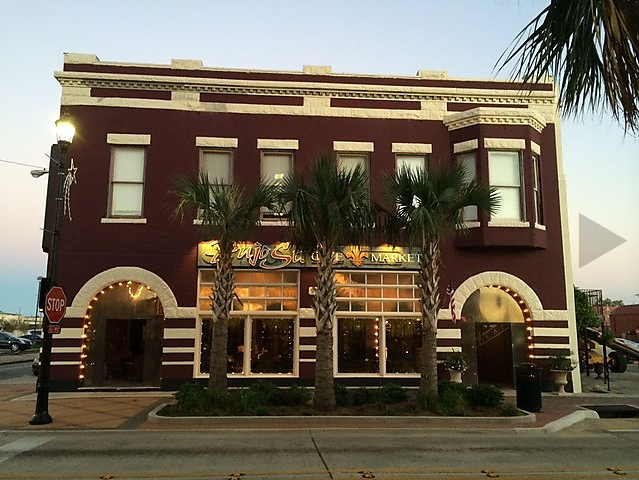 Pujo's Street Cafe
Pujo Street Cafe, Lake Charles
Top-notch service, refined food (both creole and continental) and expertly crafted cocktails are the hallmarks of this resort town restaurant, a long-time favorite. Among the many stand-outs on the menu are the shrimp bisque, the duck a l'orange, the crawfish boil and the gumbo. If you're looking for a white table cloth experience in an area where that's scarce, this is the place to head. 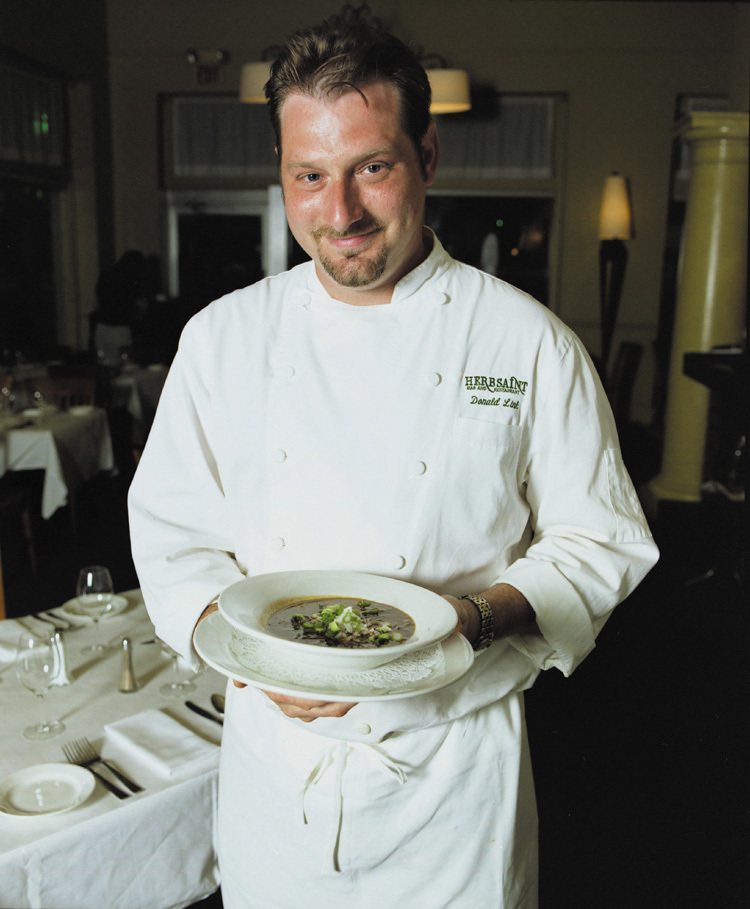 Southern Foodways Alliance (www.southernfoodways.org)
Herbsaint, New Orleans
When it come to New Orleans cuisine, Chef Donald Link (pictured) is royalty. The man behind not just Herbsaint, but also Peche Seafood Grill (opened in 2013), Cochon and Cochon Butcher—you won't go wrong eating at any of them—Link has been cooking professionally since the age of 15. He was named "Best Chef in the South" in 2007 by the James Beard Society (he was also nominated as Outstanding Chef in the US in 2012 and 2013). Herbsaint, his French/American bistro, is the one that launched the empire and its the place to come when you're in the mood to celebrate.

So what will you eat? Expect a refined take on Creole and French cuisine. The menu changes, but you could find yourself digging in to a plate of Jumbo Shrimp with Tasso-Stewed Collard Greens and Grits; or Rabbit Fricassee with Garganelli, Bacon, Pumpkin, and Madeira. The one thing that doesn't change? The excellence of both the food and service.
advertisement 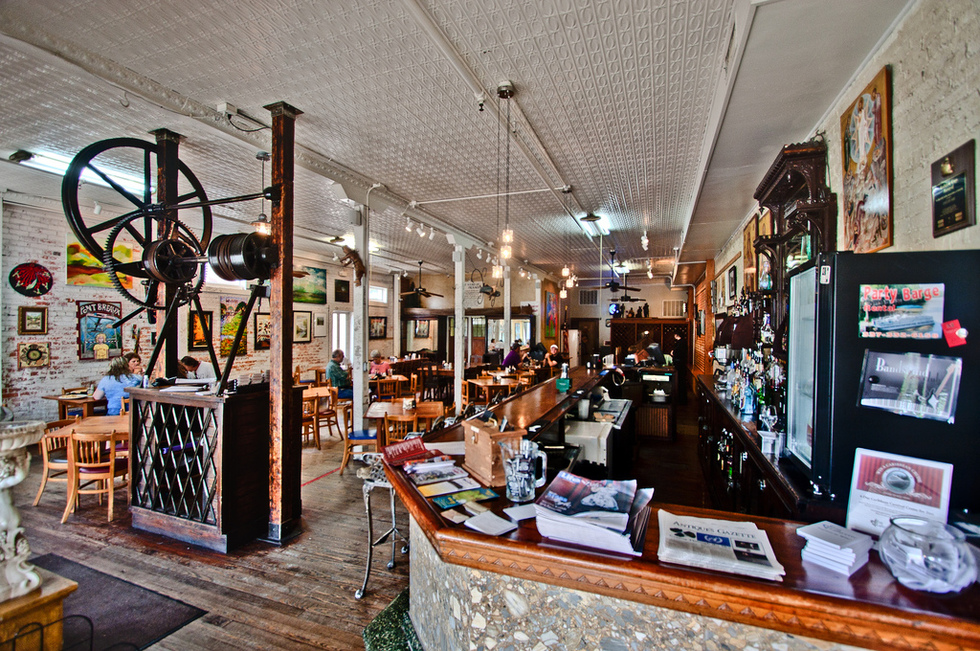 Cafe des Amis
Cafe des Amis, Breaux Bridge
A side of zydeco with that crawfish quiche? Cafe Des Amis, which is a short hop-skip-and-a-two-step from Lafayette, has become famed for its zydeco brunch, during which diners work off the calories on the dance floor, as the morning sun streams through the large windows of this wonderfully quaint and colorful cafe. As for what to order: go with anything that has a shell. The crawfish etouffe, the BBQ shrimp Pont Breaux, and the crawfish pie are all celebrated. 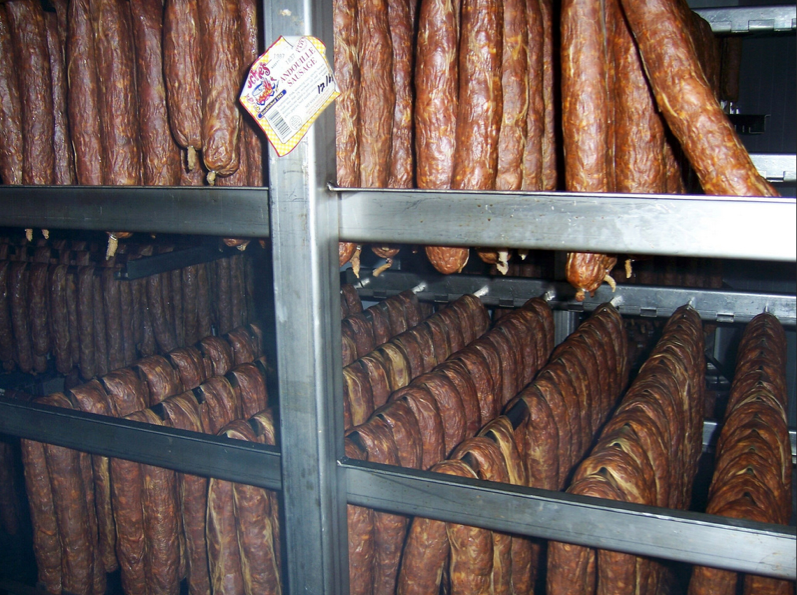 Southern Foodways Alliance (www.southernfoodways.org)
Poches Market and Restaurant, Breaux Bridge
This combo cafeteria-style restaurant and market has everything on offer from frog legs to alligator meat. But those in the know come here for two items: the superb crawfish etouffe and their famed house-smoked andouille (pictured above). The latter is plump and fiery and arguably some of the best in Louisiana. Though this is a backwater, and the decor of the place hasn't changed a lick since it opened in 1962, the andouille is so popular that Poches ships it all over the world through its website. For a highly authentic, down-to-earth and utterly delicious cajun meal, there are few better places in Louisiana.
advertisement 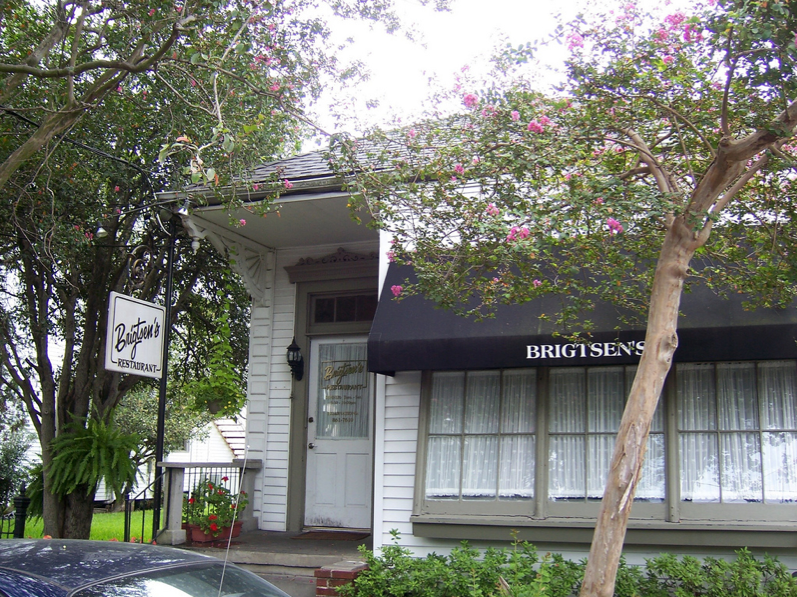 Southern Foodways Alliance (www.southernfoodways.org)
Brigtsens, New Orleans
Brigtsen's was one of the early modern Creole revolutionaries and one of the first to convert a beautiful 19th century house (pictured) into an upscale neighborhood restaurant, back in 1986. The perennial NOLA favorite still maintains a warm, romantic intimacy, and the cuisine, which shows homey, Cajun roots, has been polished to consistent excellence by Chef Frank Brigtsen. We'd say the chef has a special touch with game and rabbit; his crispy moist duck is known far and wide. As for desserts, his pecan pie with its perfect, copious crust is actually famous. Reserve well in advance if you'd like to try this star chef's food. 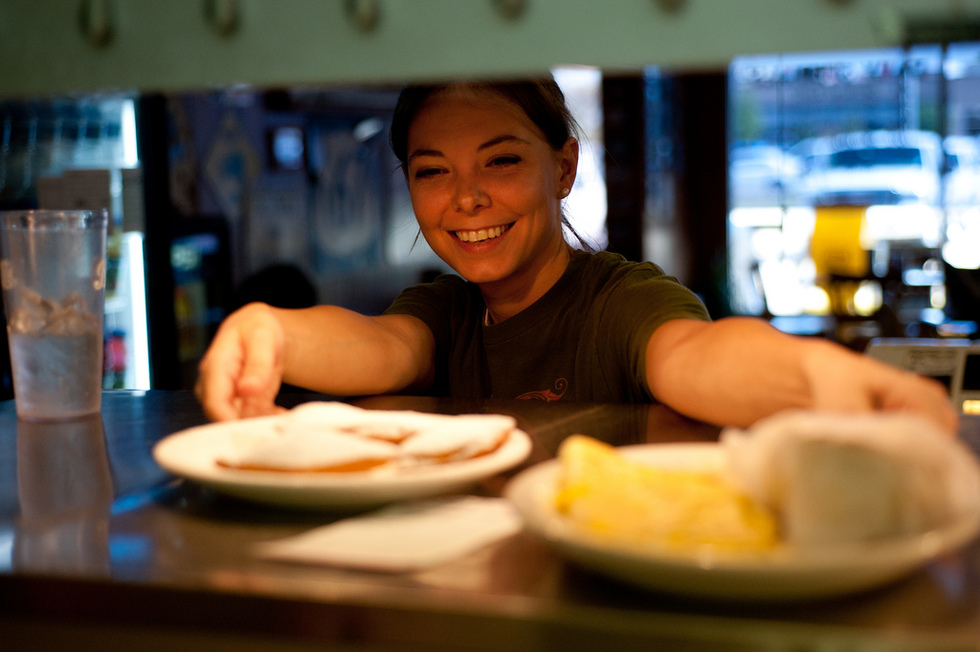 Southern Foodways Alliance (www.southernfoodways.org)
T-Coons, Lafayette
Tacked to the wall of T-Coons is, I kid you not, a taxidermied rear end of a raccoon with the words "Coons Ass" below it. It's there because in this part of the world, being called a "coon's ass" is a compliment--it means that you have deep Cajun roots. And the owner here, David Billeaud certainly qualifies---he's a sixth generation Billeaud in this area (the seventh generation back lived in France). But he calls the cooking "zydeco cooking" because it reflects the intermingling of creole and cajun traditions that makes the food in Lafayette and the surrounding area so interesting. Whatever you call it, the grub here is delish, whether you pop in for a crawfish omelet and a side of beignets at breakfast, or smothered rabbit at lunch. Best of all: the service here, as you can see, is always with a smile.
Food and Drink