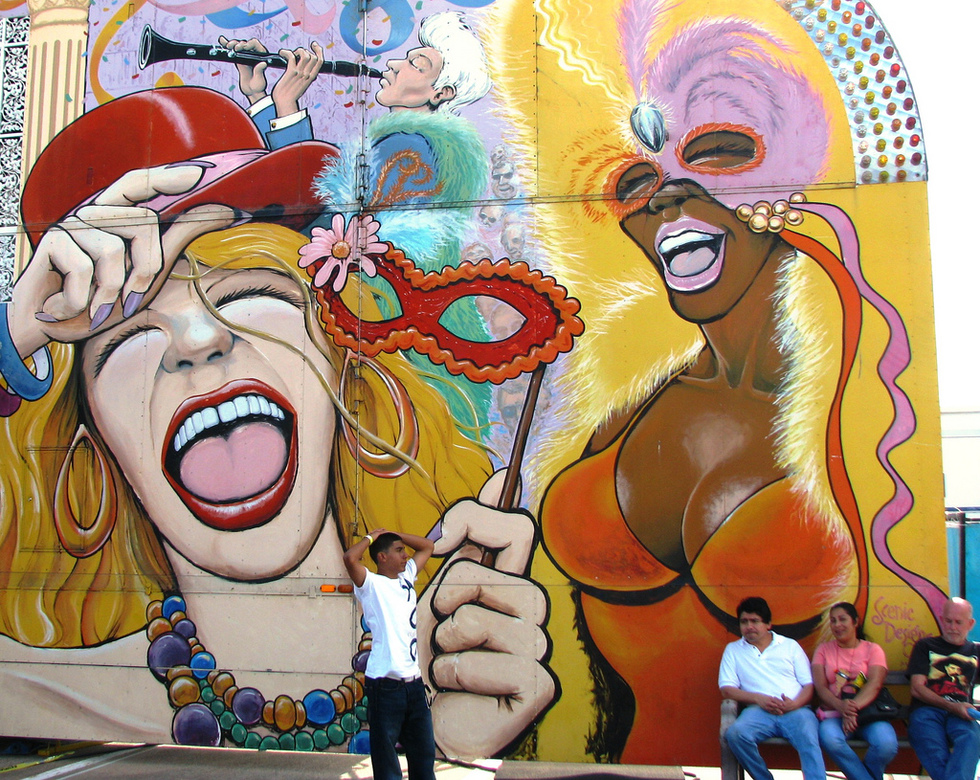 By
By William Richard
There's more to Louisiana than New Orleans' Mardi Gras! In fact, outside of summer (when the weather is better for the pool or the beach), the state is buzzing with a year-round roster of well-attended public events, each of them rich with culture particular to one of the United States' most distinct regions. 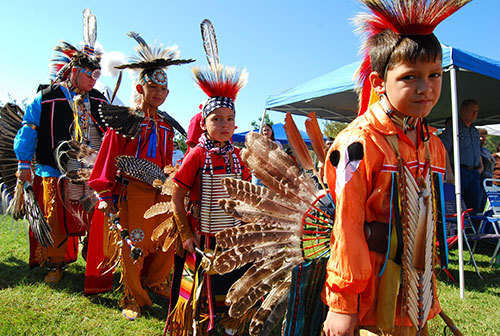 Louisiana Office of Tourism
Adai Caddo Pow Wow, Natchitoches Parish
The Adai, Native American people from northwestern Louisiana and northeastern Texas, were among the first original Americans to interact with Europeans way back in the 1500s. Later on, they even helped the Spanish establish a Texan capital in what is now San Antonio. For their heritage day, tribes from as far afield as Oklahoma and Mexico come to perform traditional dances, sell crafts and foods—Indian fry bread and tamales are natural treats for a weekend day out—and immerse the public in their traditions and culture. And it's free to attend. 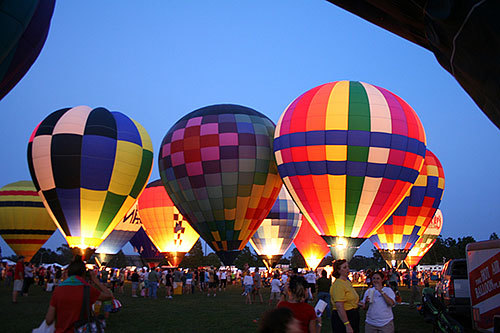 Shannon Hurst Lane
Louisiana Hot Air Balloon Championship Festival, Gonzales
The four-day hot air balloon festival near Baton Rouge began only in 2012 but it's already a firm autumn favorite combining entertainment, music, food, parachute shows, and, of course, hot air balloon rides. World champions come to match their navigational mettle, and in the evening, the handsomest balloons are illuminated from within for a breathtaking display called the "balloon glow." 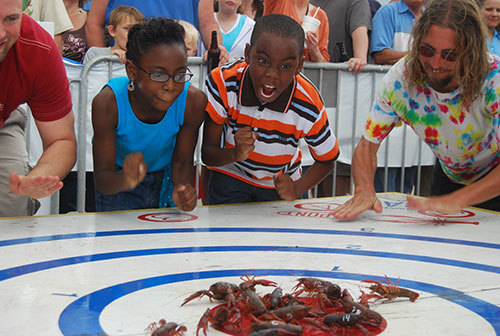 Louisiana Office of Tourism
Breaux Bridge Crawfish Festival, Breaux Bridge
In 1959, the Louisiana legislature proclaimed Breaux Bridge "the crawfish capital of the world," and the next year, the festival began. The steam rises and the Cajun, zydeco and swamp music jams while every conceivable traditional Louisiana dish flies from dozens of booths—jambalaya, étouffée, po-boys, and gator on a stick are part of the gastronomic rampage. It's an unbeatable fantasy of Cajun flavors—unless you're a crawfish. 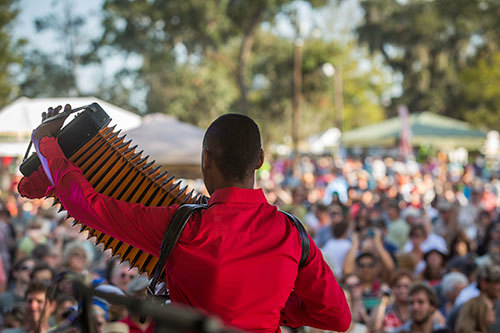 Louisiana Office of Tourism
Festivals Acadiens et Créoles, Lafayette
Louisiana's French flair intersects with Bayou culture in this popular event mashing up a food festival, a music festival, dancing, cooking demonstrations, crafts presented by the Louisiana Arts Guild, and kids' activities that highlight the particular traditions of the area. The hugely popular weekend has its roots in early-'70s government efforts to promote local French culture before it was lost, and now, the poppy sounds of Créole music (like Cedric Watson, pictured) and peppy flavors of Cajun spice have become tourist attractions the state couldn't do without. 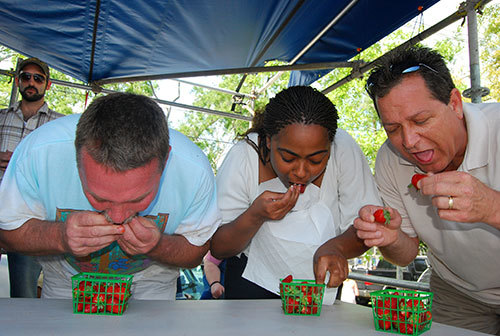 Louisiana Office of Tourism
Louisiana Strawberry Festival, Ponchatoula
The type of high-spirited crop celebration that Americans have always cherished, for more than four decades the Strawberry Festival has been a finger-staining party for the berry. Expect exactly the kind of wholesome farming event you might dream of, with strawberry eating contests (pictured), egg toss competitions, sack races, a midway with rides, two stages of live music, a pageant, and berry creations. Naturally, the festival even crowns a Strawberry King and Queen. As you might gather, it's no little affair; the recipe for 2013's strawberries and cream pie was seen more than a million times on Facebook. In fact, the event is reportedly right behind New Orleans' Mardi Gras as the state's most-attended festival of the year. 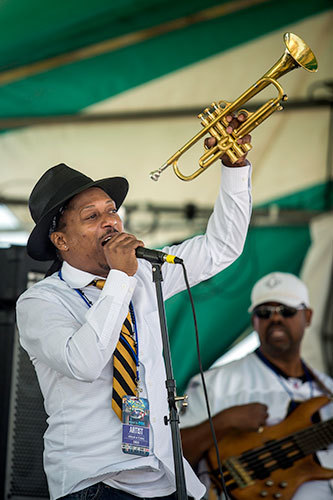 Louisiana Office of Tourism
Gretna Heritage Festival, Gretna
Right across the river from the Big Easy (you can take a ferry there and listen to music with a view of barges), Grenta hosts a big-ticket three-day event that sprawls 25 city blocks, 75 musical acts on seven stages, boxing matches, carnival rides, and a food tent like a big top. The theme here is internationalism, so the food runs the gamut from German beer to barbecue to sausage to beignet fries. Entertainment is world-renowned too; past acts have included ZZ Top, Chicago, Kermit Ruffins (pictured in 2013), and Earth, Wind & Fire. With good weather, attendance can top 100,000. 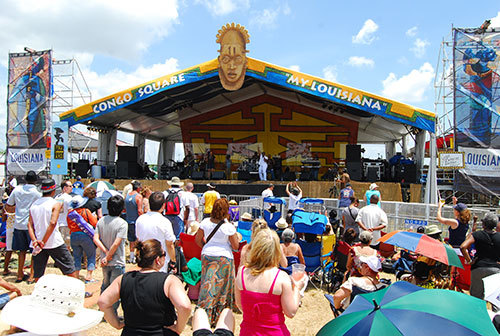 Louisiana Office of Tourism
Jazz and Heritage Festival, New Orleans
The biggest names in music consider it an honor to play "Jazz Fest," as it's called--at the Fair Grounds, you might find Billy Joel, Stevie Nicks, Maroon 5, Willie Nelson, or Paul Simon. Meanwhile, you can fill up on authentic sausage (Vaucresson Sausage Co. has been selling links there for two generations) and po-boys, but plan ahead, because hotels fill up, too.

When: Late April/early May 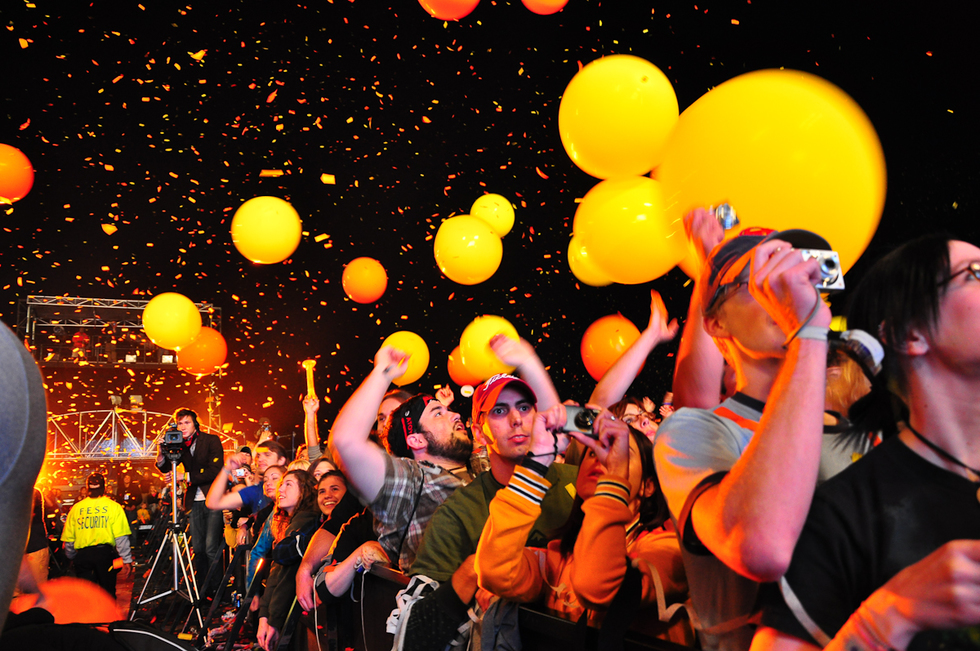 GlowJangles/Flickr
Voodoo Experience, New Orleans
Less acoustic but no less commercial than Jazz Fest, Voodoo attracts rock and electronic names such as Macklemore & Ryan Lewis, Nine Inch Nails, and Pearl Jam to City Park, which is divided into areas spotlighting local music, commercial headliners, and burlesque-style oddities. Not as macabre as its name might suggest (and not as uncrowded as this daytime photo might suggest), the big-dollar Voodoo Fest, as it's sometimes called, fills the park with countless food and beverage vendors, carnival rides, and younger crowds bidding goodbye to the summer with a rousing outdoor dance-party sendoff. 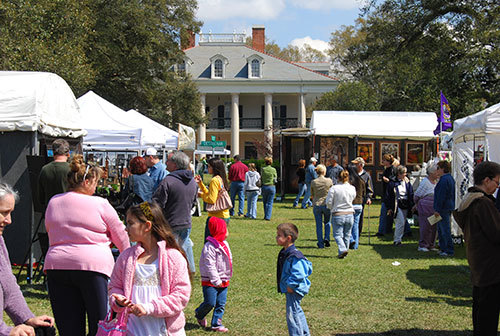 Louisiana Office of Tourism
Oak Alley Plantation Arts and Crafts Festival, Vacherie
Oak Alley Plantation gathers 170 booths of juried artists and crafters from throughout the United States, who contribute folk art, photography and woodworking. But the best, only-get-it-here find at this festival is a Louisiana Mud Painting, an artwork miraculously created using soil of various hues along with egg yolk as a binder. 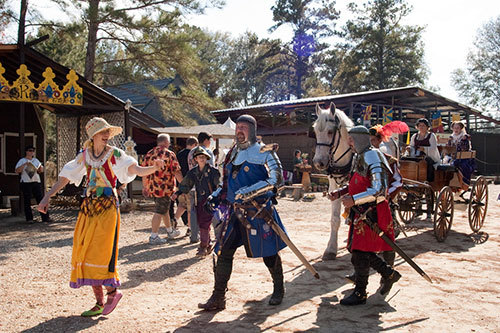 Peter Vidrine
Louisiana Renaissance Festival, Hammond
Renaissance Fairs are underrated family entertainment. This is one of America's best, and because it runs for six weeks on 16 acres, it makes a point of being welcoming to a wide audience that may not be immersed in the Ren Faire subculture. Louisiana Renaissance Festival emulates a 16th-century English village named Albright during the 1565 fall harvest festival. Cast members dress as people would have been dressed then, but with a wink. 2013 entertainment included Bawdy Beautiful, who performed "songs with an innuendo," "Whiskey Bay Rovers" (who supplied "pirate songs and sea shanties"), and plenty of artisan demonstrations from leatherworkers, weavers, candlemakers, and, um, donut fryers. During its monthlong run, there's a daily Royal Parade, rapier demonstrations, costume contests, and puppet shows. And Queen Elizabeth I holds court the way Santa does at the mall. If you forget your staff or crown at home, they have some there for you.

When: November and early December
Arts and Culture