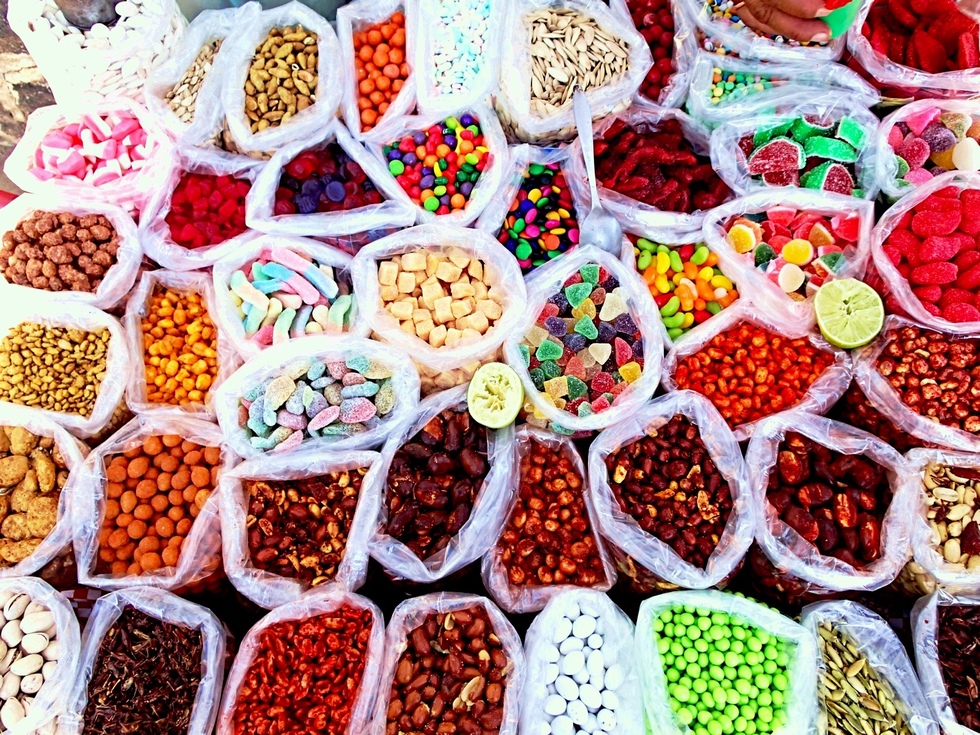 By Abigail Shneyder
Candy may be packed with sugar and empty carbs, but there is something nourishing about it: sweets can be loaded with culture and history. Take for example the confectionary pursuits of Mr. Milton Hershey. After failing several times, this high school dropout opened the world’s largest chocolate factory in 1903. Nearly three million people a year from all over the globe now visit Hershey’s Chocolate World to learn about the American success story. There may not always be a major tourist attraction devoted to the treats you find in other countries, but no matter where you go, when you taste them you'll be sampling the richness of local culture and history. 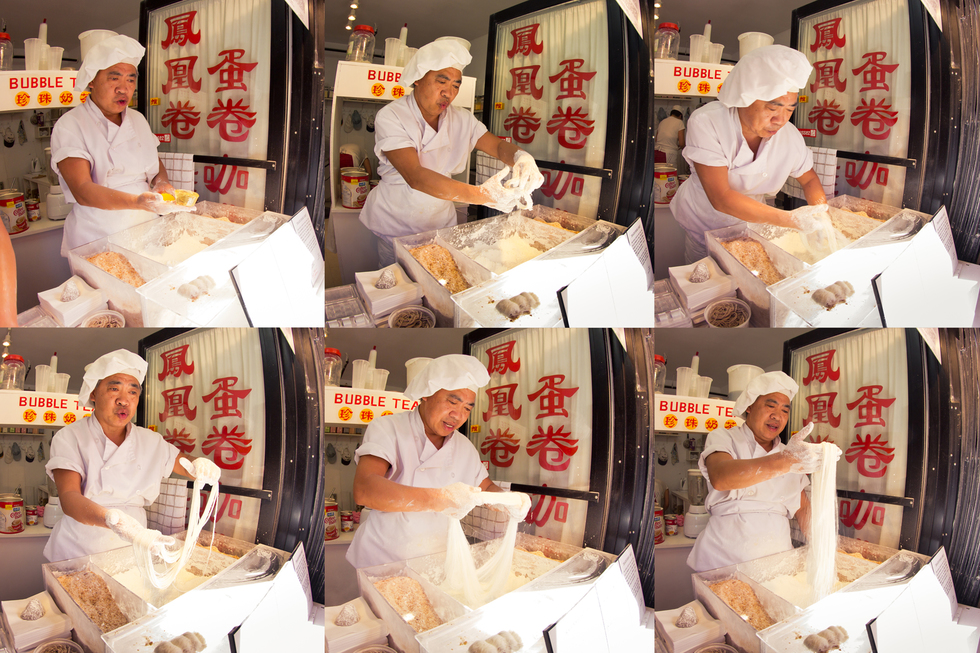 stillwellmike/Flickr
Dragon Beard in China
Some two thousand years ago, an inventive confectioner created a new type of candy for the Emperor and his court. Through an elaborate stretching process, the candy-maker crafted a high-fat dough (a combination of peanuts, glutinous rice flour, maltose syrup, coconut and sesame) into hair thin strands so delicate they were wafted by the slightest breezes, and so sticky they adhered to the chin of the eater. Legend has it that the emperor named the treat "Dragon Beard" both because of the candy's looks and to signify that only royals could eat the stuff (the Dragon was his symbol).

Eventually, the candy became a staple at celebrations for common folks, until the Cultural Revolution, when the Red Guard cracked down on crafts attributed to Imperial China—the Han Dynasty, in this case.

It looked like the art of making this candy would die out, as no new candy-makers could be trained, but in recent years, dragon beard candy is making a comeback and you'll see vendors at festivals across China and in Chinatowns around the globe going through the highly theatrical process involved in making this storied confection. 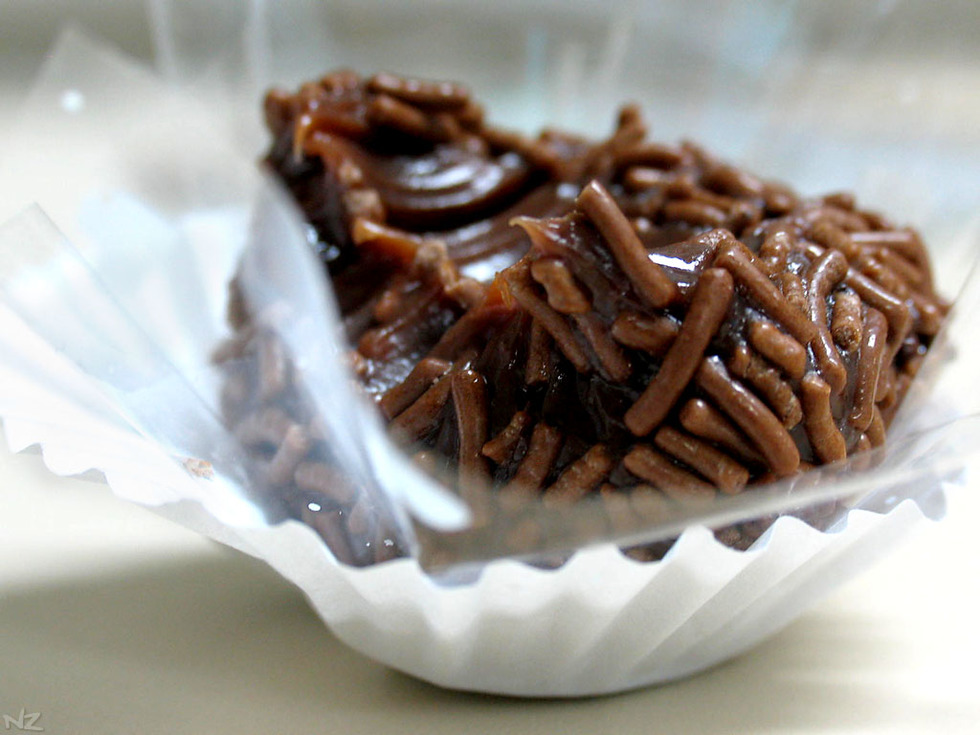 Rodrigo Senna/Flickr
Brigadeiros in Brazil
Travel through the world's fifth-biggest country and you'll find that the landscape, cuisine, cultural mores, and even the ethnic make-up of the population shifts dramatically from one state to the next. One of the few constants is brigadeiros, the chocolate truffle all Brazilians seem to crave. Across the country, the recipe for this treat remains the same. Sweetened condensed milk and cocoa powder are mixed and heated on a stove to achieve the brigadeiros’ signature sticky and smooth consistency. With buttered hands, a baker rolls the mixture into balls which are then rolled into sprinkles or granulated sugar. A staple treat at parties and birthday celebrations, this small candy sticks Brazil together. 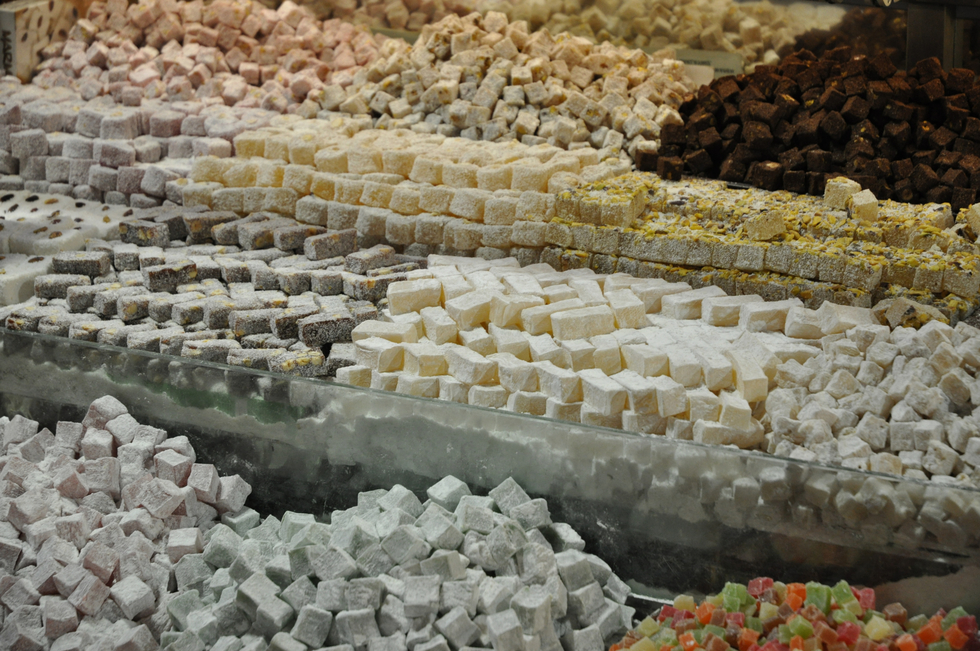 ale/Flickr
Turkish Delight in Turkey
1776 wasn't only a the year for America's Declaration of Independence—it marked a revolution in candy making as well. It was in that year that Bekir Effendi opened his confectionary shop and introduced Lokum, better known as Turkish Delight, to the world. A gel made of sugar and starch, the candy was such a hit that the sultan appointed Effendi "Chief Confectioner to the Palace" and awarded him a medal of honor in the first degree. You can still visit the original Hacı Bekir confectionary shop in Istanbul today.

The candy also has a literary pedigree: In The Chronicles of Narnia, the White Witch feeds it to protagonist Edmund Pevensie, who becomes so obsessed with gorging on the treat, he falls under her power. Let's see if you find Turkish Delight as wickedly addictive. 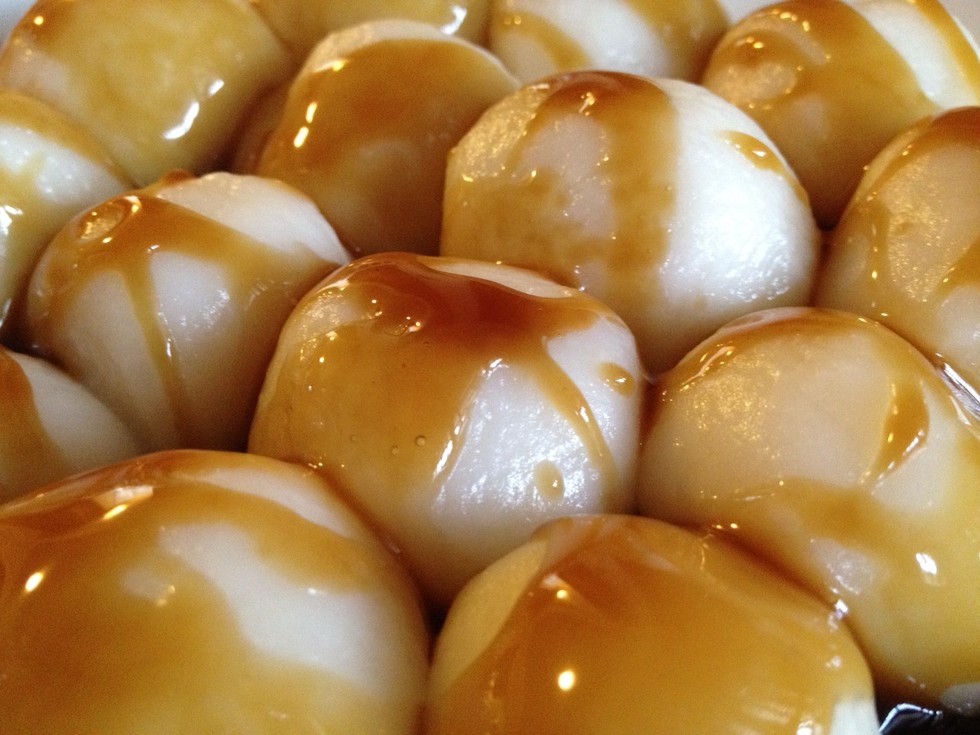 305 Seahill/Flickr
Mochi in Japan
History and ritual are as much a component of mochi as the short-grain, glutinous rice that forms the base of this sticky sweet. Samurais carried it into battle to keep up their strength because a half-inch squared lump has as many calories as a full bowl of rice. In fact, locals would know when a battle was going to happen by the sound of pestles hitting usus, mortars made of wood or stone used to mash the rice into paste. That sound is heard today during the mochitsuki ceremony, a two-day process of soaking, cooking, and pounding to create mochi the traditional way.

Mochi comes in many forms. It may contain bean paste, fruit, or ice cream at its core; it's sometimes toasted and eaten over noodles; and it's used as a dumpling in soups. Trying it in Japan, especially if you can get it fresh rather than factory-produced, can be a culinary highlight of a trip.

But mochi eating has a dark side, too. Every New Year's, when the treat is devoured to ensure good luck in the coming 12 months, a number of elderly people invariably choke on this super-sticky treat. In January of 2014, in Tokyo alone, four people choked to death and another 10 were hospitalized. Please chew carefully! 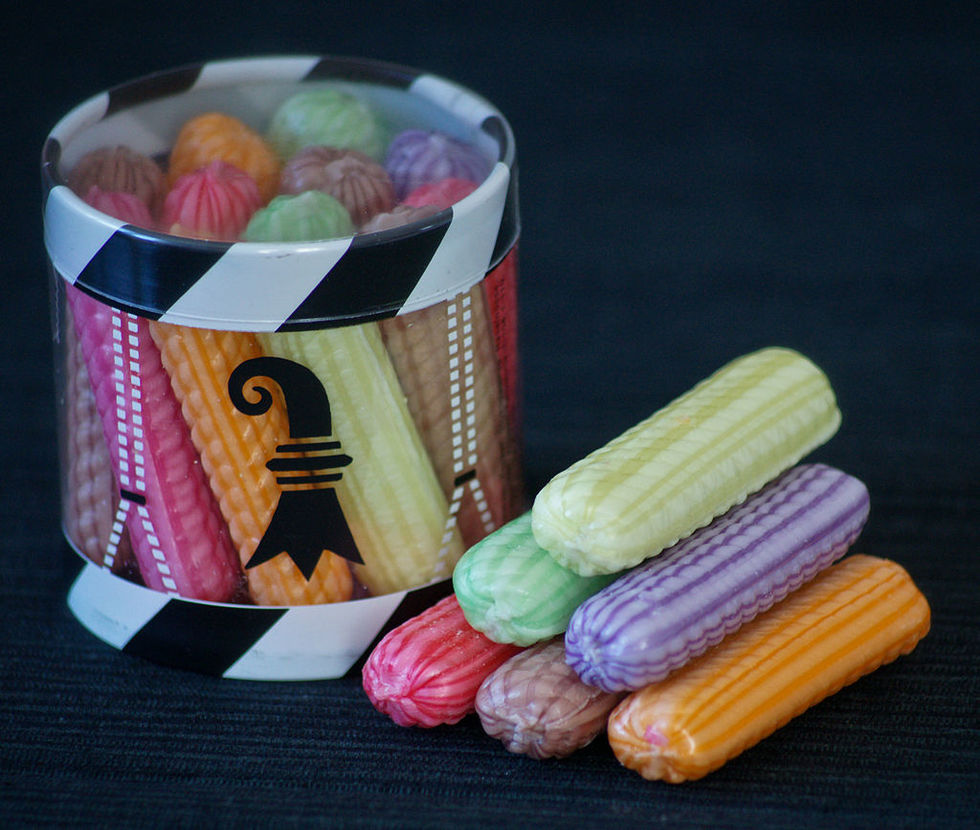 Sandstein/Wikimedia
Mässmogge in Switzerland
Lindt, Toblerone, Suchard—these Swiss brand names are world-famous. But this Alpine country has even more to offer the candy conniosseur. In fact, lesser-known mässmogge makes up one-fifth of all Swiss candy production. The hard-shelled sugar candies filled with hazelnut-praline are most often sold at the Basler Herbstmesse, a two-week-long Autumn Fair that Basel has hosted for more than five hundred years. Half of all mässmogge will be snacked on during the festivities, and the other half can be found in specialty shops throughout the year. 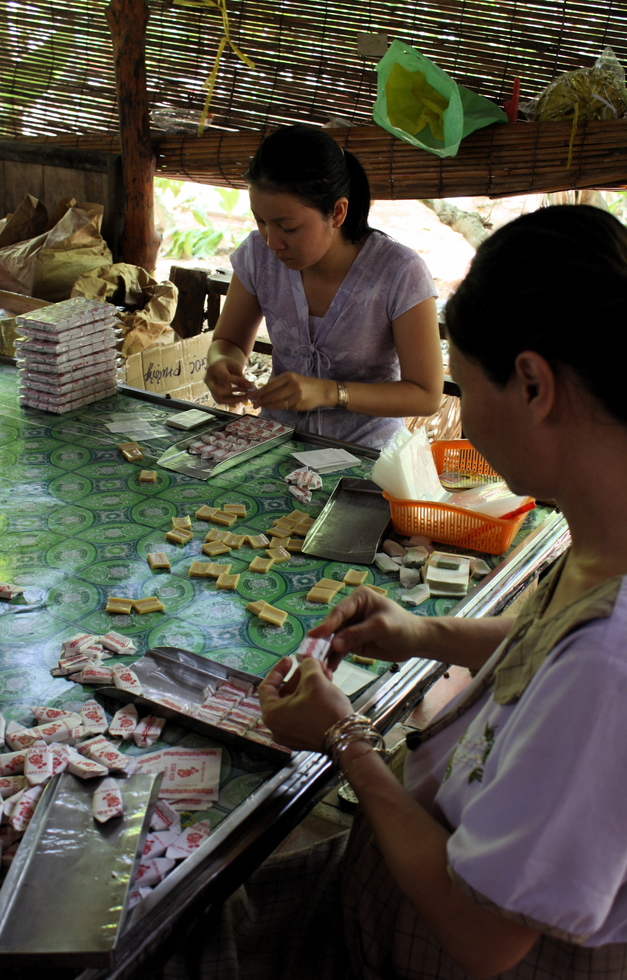 Dan Searle/Flickr
Coconut Candy in Vietnam
Candymaking is big business in Vietnam, particularly in Ben Tre Province (known as the "land of the coconut") where 30% of the local economy is devoted to the production of coconut candy. Dozens of small factories compete with one another. Their recipes—basically different ratios of coconut cream, milk and grated coconut to sugar and malt syrup—are closely guarded secrets. Some factories will allow outsiders to watch the production process, which involves burning coconut shells under large woks that hold the ingredients. Once the mix is caramelized, the thickened product cools in large molds and is cut into rectangles, and then it's wrapped and individually packaged. These scrumptious candies make wonderful gifts for friends back home. 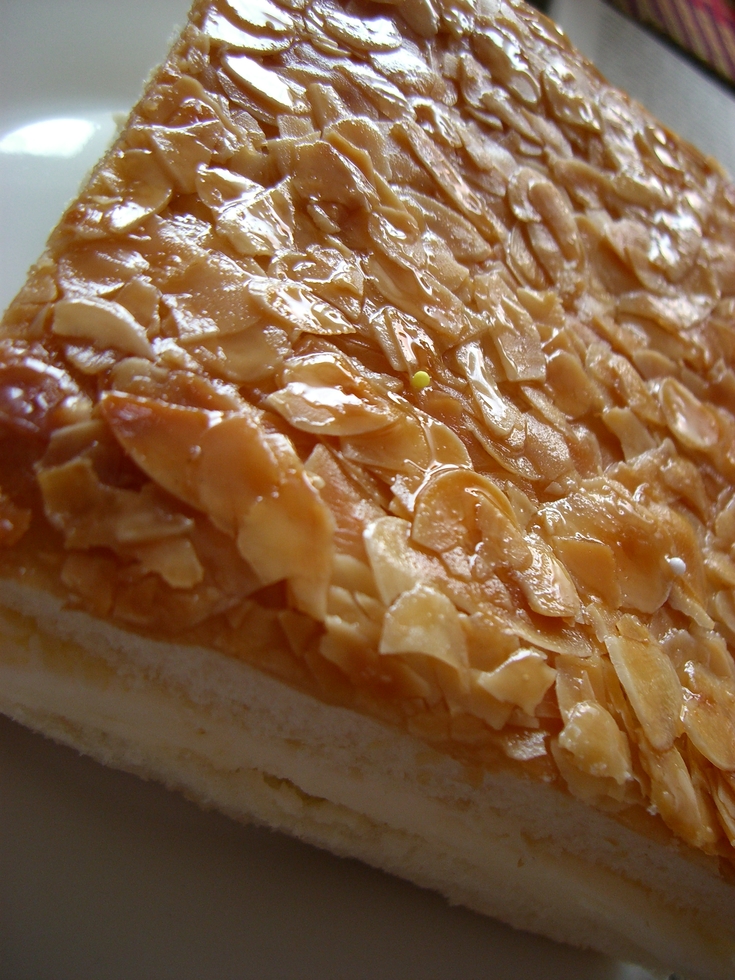 Michael Radtke/Flickr
Bienenstich in Germany
Bienenstich Kuchen is a German specialty that translates to “Bee Sting Cake.” One legend says that a bee, attracted to the honey-topped cake, stung the baker who created the recipe. The sweet-yeasted cake is filled with vanilla pastry cream and baked with a signature topping of carmelized honey and almonds. You'll definitely want to have some. 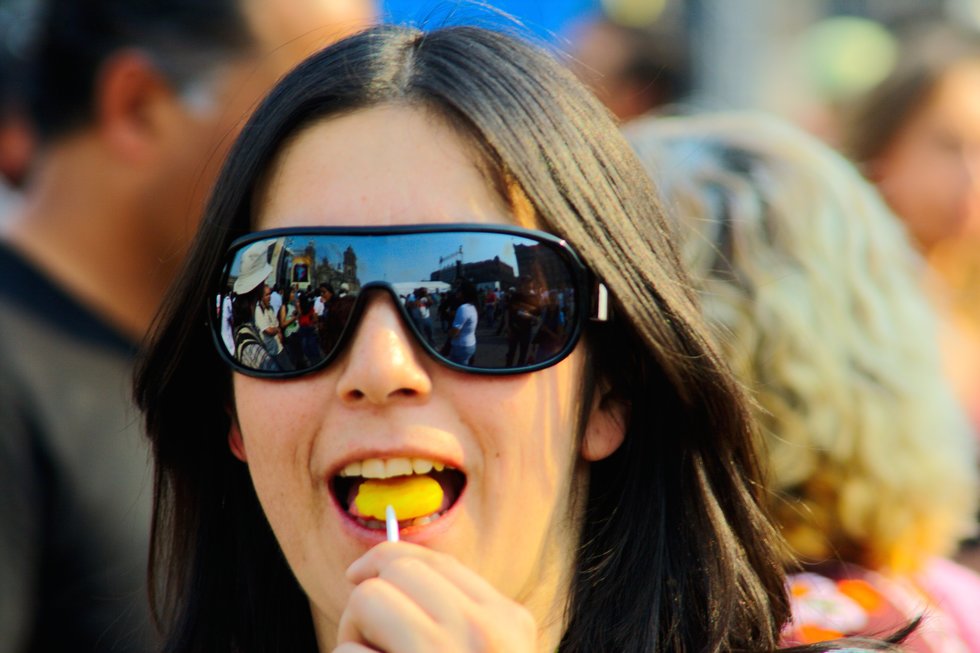 Esparta Palma/Flickr
Tamarind Candy in Mexico
Spicy and tangy, sour and sweet, Mexican tamarind candy is bursting with all kinds of opposing and complementing flavors. Often sugar- or chili-coated, tamarind candy can be gooey or chewy, dried into clusters, or made into lollipops. Tamarind trees, while common in Mexico, can also be found elsewhere in South America, Africa, India, and other parts of Asia. The fruit is acidic on its own, but with some sugar, it can be sweetened into a pleasant and tasty snack. 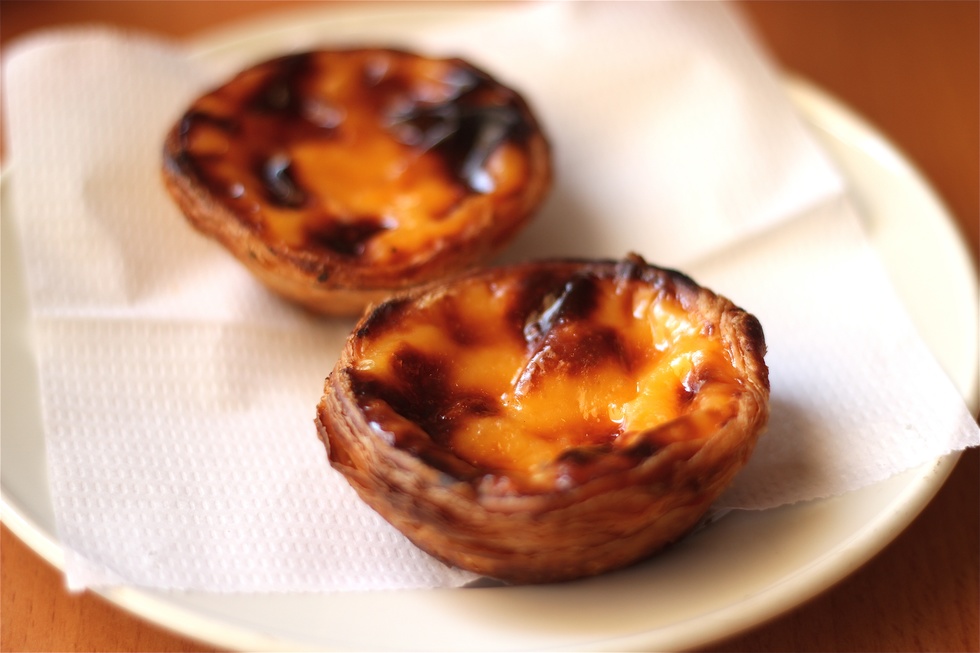 André Luís/Flickr
Pastéis de Belém in Portugal
A 17th-century Portuguese time traveler would be able to easily recognize today's Pastéis de Belém because the recipe hasn't changed in centuries. The treat was created by Catholic monks hundreds of years ago as a way of utilizing leftover yolks after the egg whites were used to starch clothing. After the Liberal Revolution of 1820, many convents and monasteries faced foreclosure, but monks from the parish of Santa Maria de Belém had an idea. They started selling pastéis de nata at a nearby shop, hoping the money raised would ensure their monastary’s survival. Alas, the monastary eventually closed, but the shop owners bought the recipe, opened the Fábrica de Pastéis de Belém in 1837, and tourists and locals have been flocking to Lisbon for pastéis ever since. 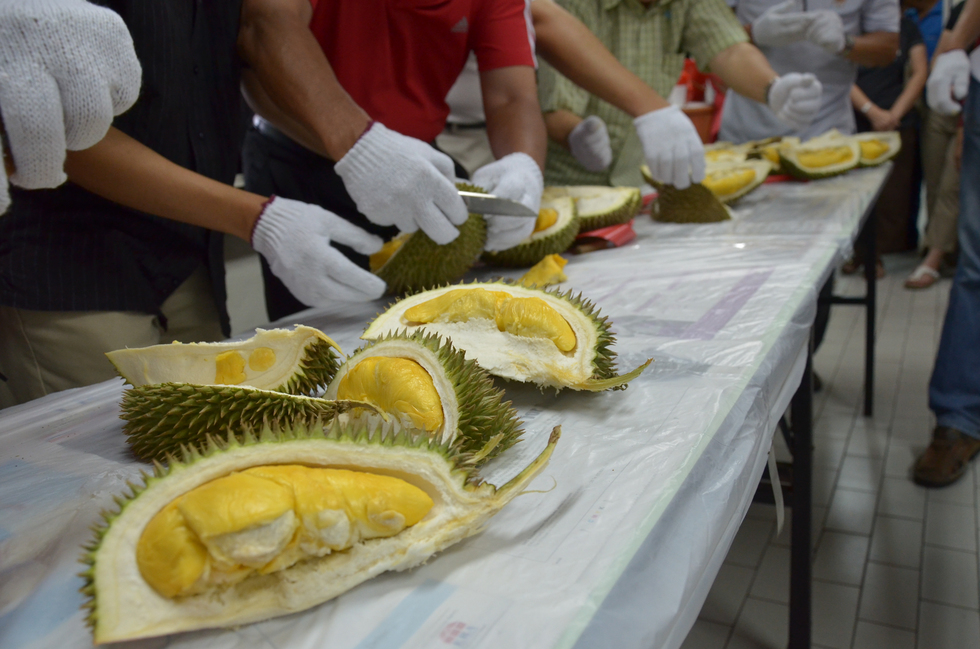 YL Tan/Flickr
Durian Candy in Indonesia
Love 'em or hate 'em, everybody’s got an opinion on durian candy, the chewy sweets made from the famously stinky fruit. Native to Indonesia and Malayasia, the fruit has been described as smelling like turpentine, rotten onions, sewage, rotting corpses, and gym socks—combined. It is considered so malodorous it is even prohibited on public transit and in hotels around Southeast Asia. Still, some folks love the stuff, especially in its candied form, which is slightly sweeter, and slightly less aromatic than the fresh fruit itself. Definitely an acquired taste, unless you happen to already love oniony, rotting gym socks.