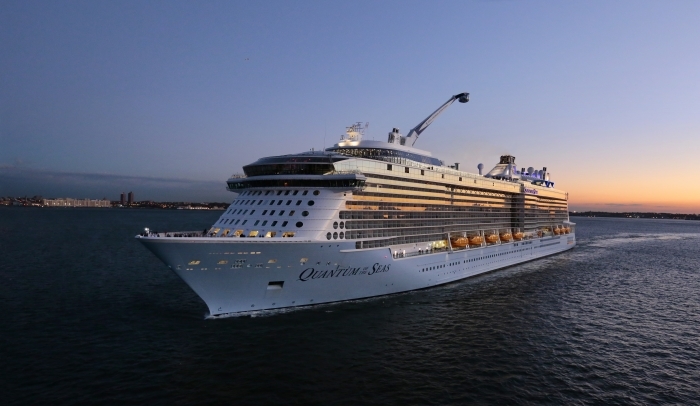 Cool Stuff Aboard the Quantum of the Seas

By Jason Cochran
Royal Caribbean's megaship Quantum of the Seas was so named because its designers wanted it to represent "a quantum leap forward." Is that just hype? Is this impressive megaship really a game-changer?

Well, yes and no. Some of the technological advances—faster Wi-Fi, wristbands that store your schedule and payment authorization—are likely to be on ships across the industry in time. But better connectivity is a trend sweeping tourism in general, not just cruise ships. The Quantum just got there first.

The amenities, though, indisputably break new ground. Whether you care about cocktail-serving robots or bumper cars depends entirely on the kind of vacationer you are. Some observers call twists like these mindless and would rather go on a vacation that focuses on the beauty of the destination. Other holidaymakers will choose the Quantum expressly because of these new ideas.

Only you know the kind of vacationer you are. Check out these new features on the Quantum. Are they the future—or just clever gimmicks? Or could they be both? 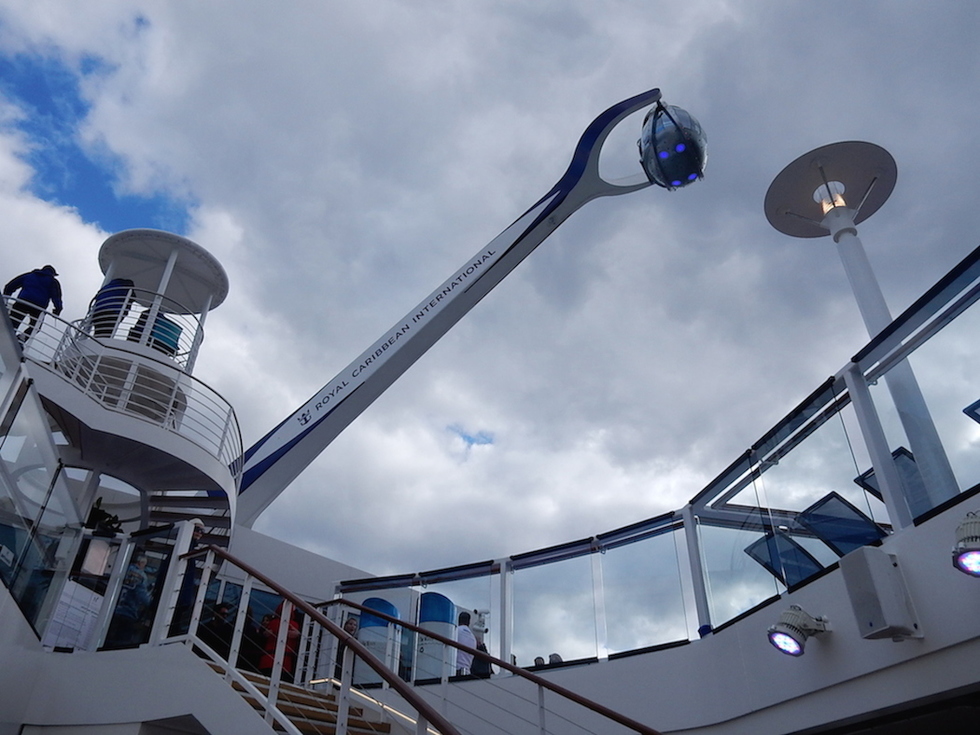 Jason Cochran
The North Star
The most salient feature is apparent from a distance. It may look like the Quantum is in a state of excitement, but that pod on a mechanical stalk is its signature amenity: The North Star. Groups of riders pay to board and be gently raised as high as 300 feet above the deck of the ship and, if the seas are smooth, over the water. 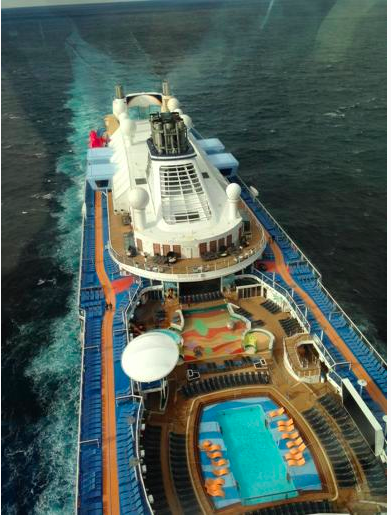 Fran Golden
The View from the North Star
No, that's not a shot from a drone. That's from the air-conditioned 14-passenger cabin of the North Star. Unlike nearly everything else on the modern megaship, it reminds passengers that you really are in the middle of the sea, and it also gives you some sobering perspective that your vessel is not much more than a speck on it. The perspective is wholly unique among cruise ships.

Installing the North Star came with an opportunity cost for the ship's designers: It's the first Royal Caribbean vessel to do away with the signature Viking Crown Lounge, the semicurcular cocktail bar that surveys the pool decks of its previous ships. Unfortunately, this deprives the Quantum of a comfortable indoor bar at which to roost and enjoy the sea; the other sea-facing bars are either small or confined to rooms that do double-duty as an entertainment auditorium. 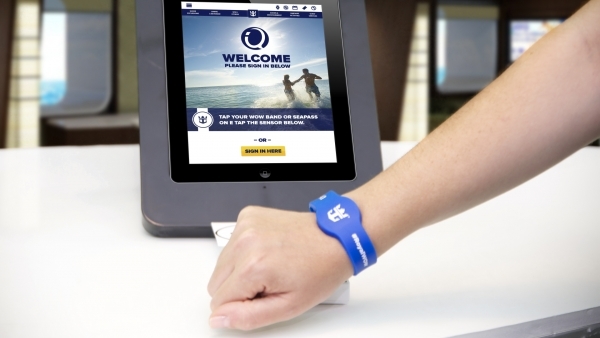 Royal Caribbean International
WOWbands
When you check in at the port, you don't get a key card. Instead, your card is waiting for you at your stateroom, and so are these RFID-equipped WOWbands, which buckle on your wrist like a bracelet and are encoded with everything you need to get around on board. Press it against a sensor on your cabin door and it will unlock, hold it to the back of a cocktail server's tablet and you'll pay for the drink. (We wonder how the crew feels about that, since it deprives them of passengers' traditional method of adding a gratuity to the bill.) These mean you no longer have to carry a key card around; everything you need is fastened to you all the time. 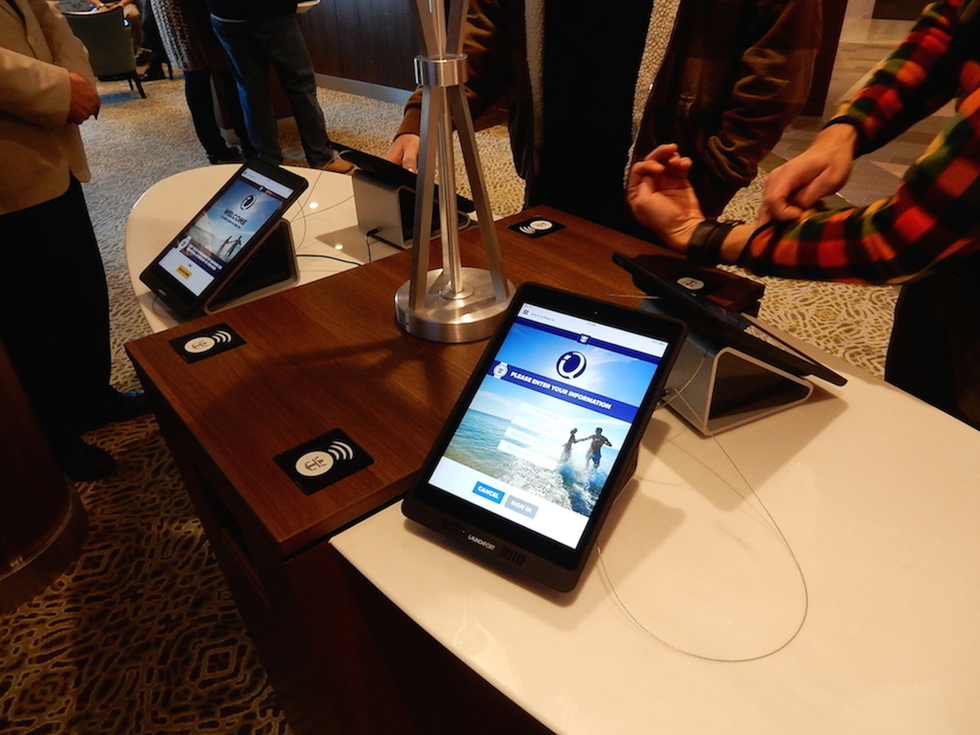 Jason Cochran
WOWband kiosks
If you want to make a dining or entertainment reservation (and you'll want to—there's no main restaurant so you'll likely fill your schedule with visits to more than a dozen dining locations), you can do it at a few stations that read your WOWband to open your account and add appointments to your itinerary. When you show up at, say, a show you have reserved, crew scans your wristband to verify your reservation and in you go. Not everyone is adept at using this technology, though, so there is also crew on hand to assist with making reservations by kiosk. 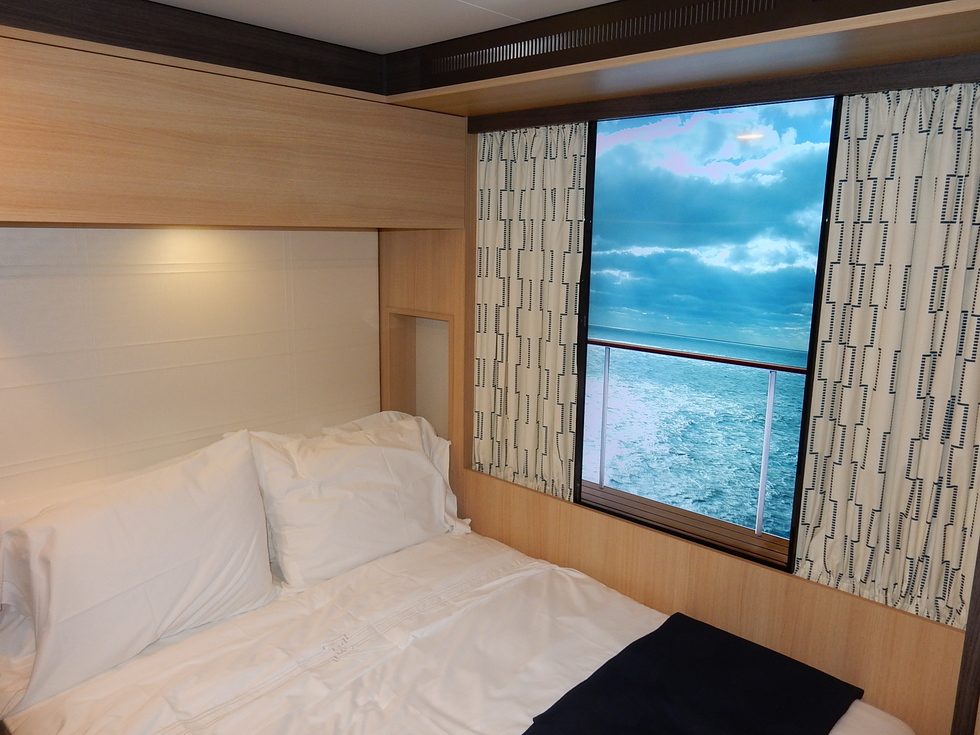 Jason Cochran
Virtual Balcony
This isn't a Royal Caribbean innovation (Disney did it first), but it's a boon for those who can only afford an interior, windowless cabin. Live HD cameras stationed around the exterior of the ship transmit live images of what's outside to a screen inside each inside stateroom. Superimposing the fake balcony railing is a little much, but otherwise the image looks crystal clear. 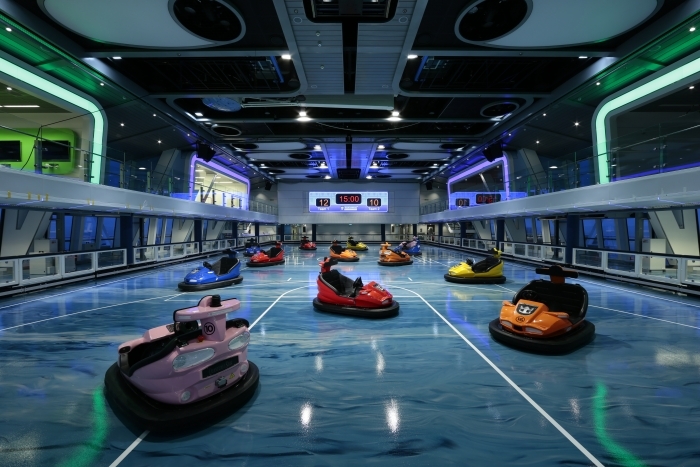 Royal Caribbean International
SeaPlex
SeaPlex is the ship's hopped-up gymnasium on the top decks. Depending on when you visit it, it can be a bumper car pen, a roller skating rink, basketball courts, or a venue for trapeze training. The various hoops and swings are stored in the ceiling inside hidden fly space and the flooring was specially designed to accommodate everything seamlessly. 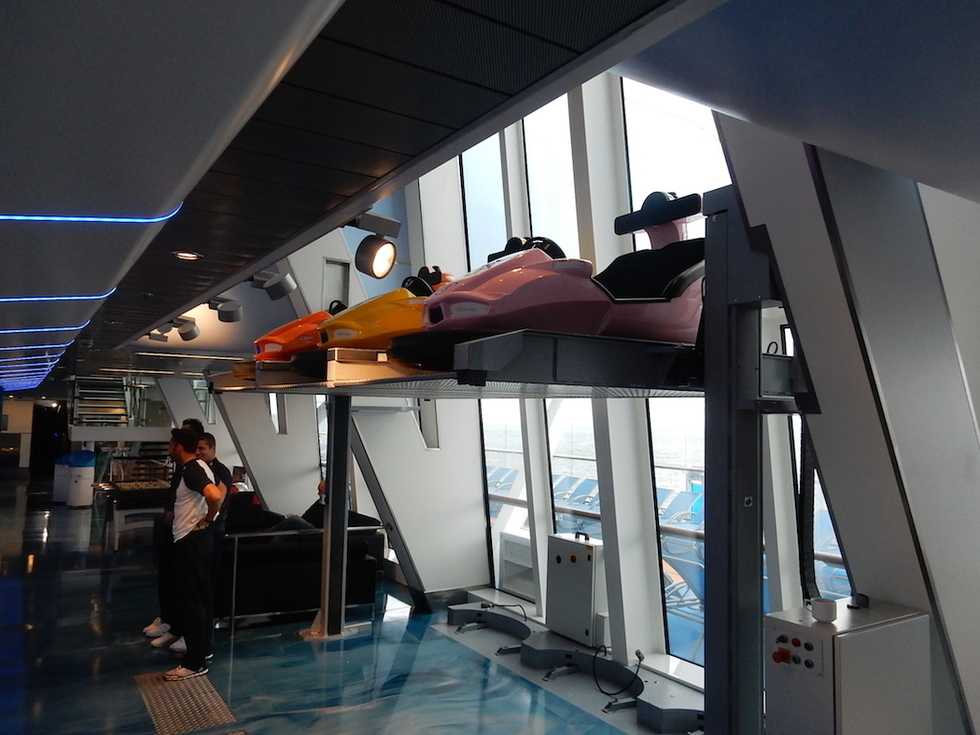 Jason Cochran
Bumper Car lifts
When the SeaPlex isn't being used for bumper cars, the 18 vehicles are kept out of the way on twin elevators like this one. They work exactly like car elevators in city parking lots. 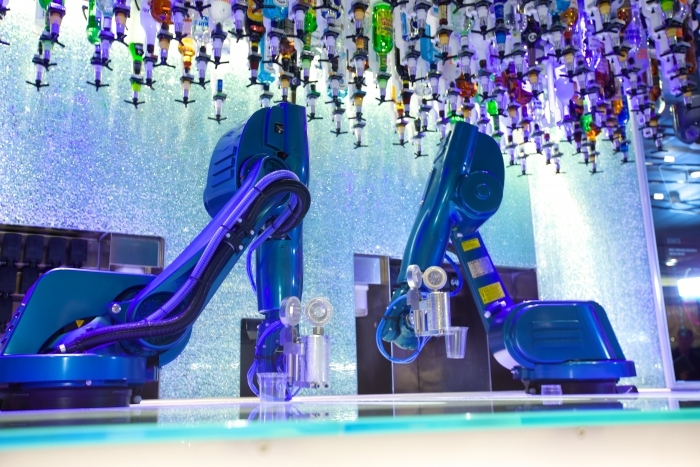 Royal Caribbean International
Bionic Bar
The Bionic Bar area is where twin, pre-programmed Kuka robot arms busily mix cocktails to order. Passengers order on tablets, choosing either from a list of standards or inventing their own concoction, and their orders are queued on a display while the robots process the drinks. When the drink is ready, you tap your WOWband to a sensor and your cup slides along a track to rest within reach. There are some kinks—our Long Island Iced Tea tasted terrible and a replacement order was ruined when the robots didn't realize they were out of grenadine—so for best results, keep the orders simple. No matter the snafus, it's still a memorable way to be served a cocktail. 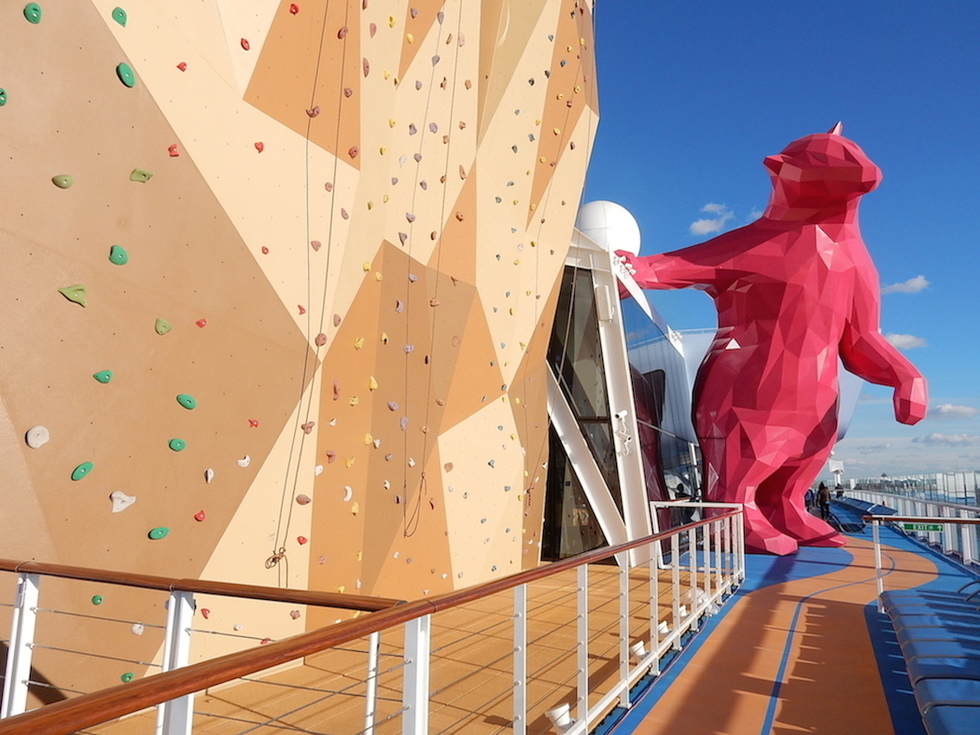 Jason Cochran
Felicia
A ship has to be pretty remarkable if the installation of a three-story magenta bear isn't the first thing you mention. Royal Caribbean named it Felicia, and you can walk between her legs to enter the SeaPlex. That's a rock climbing wall beside her. Once upon a time, Royal Caribbean made headlines for adding outdoor rock climbing walls. Now it's barely—or, um bearly—noticed. 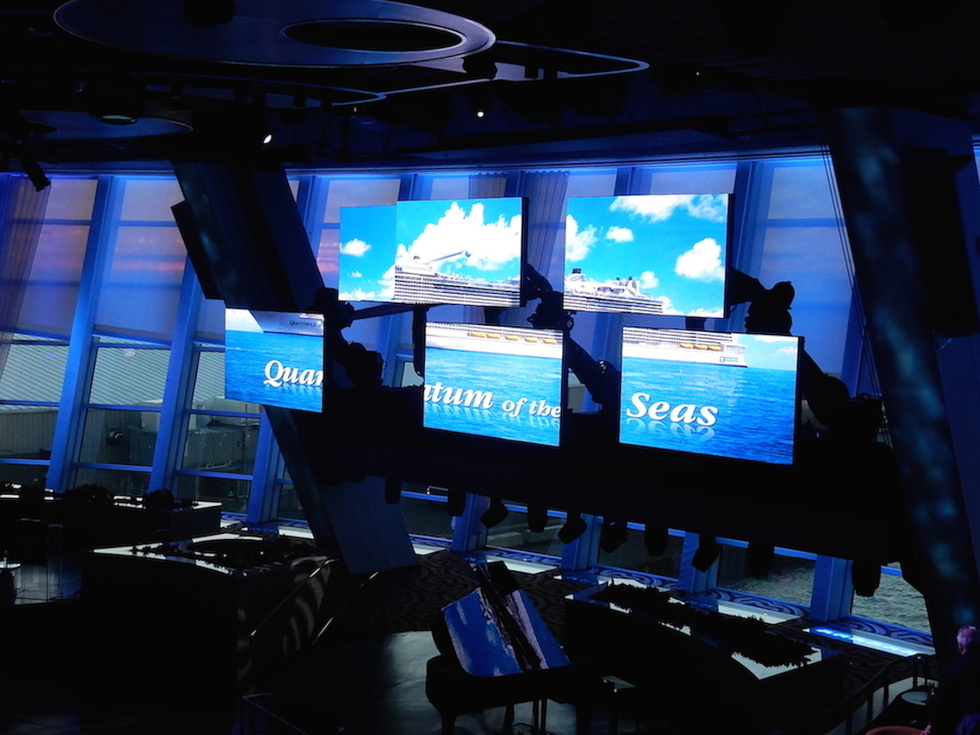 Jason Cochran
Two70 RoboScreens
Two70 is the most remarkable space on board. This multi-level auditorium has 270 degrees of three-level windows on the stern, but during the frequent scheduled shows in this terrific area, that view is covered by what Royal Caribbean calls Vistorama, which are screens on which are projected high-definition animated images. In addition to theatrical embellishments such as trap doors and elevator platforms, the room also contains RoboScreens, which are these HD screens on robot arms that dance around each other and form mosaics of shifting images. They fold into the ceiling when they're not in use.

The room might have made for a spectaular full-time lounge, but instead it functions like a common room for the ship. It contains an arty hour-long show (Starwater), an ice bar space, and, on its back wall, a free lending library that is unforunately smaller than what a significant number of passengers probably have back home. 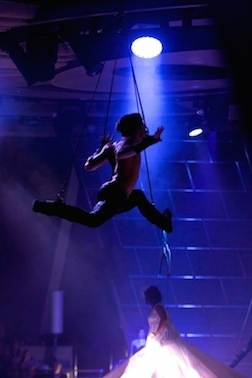 Royal Caribbean International
Starwater
Buff aerialists descend from the ceiling during the custom-made performance art revue Saltwater, performed in Two70. It doesn't make a lot of sense, but half the point is to get a kick out of the bells and whistles that were installed in the room. 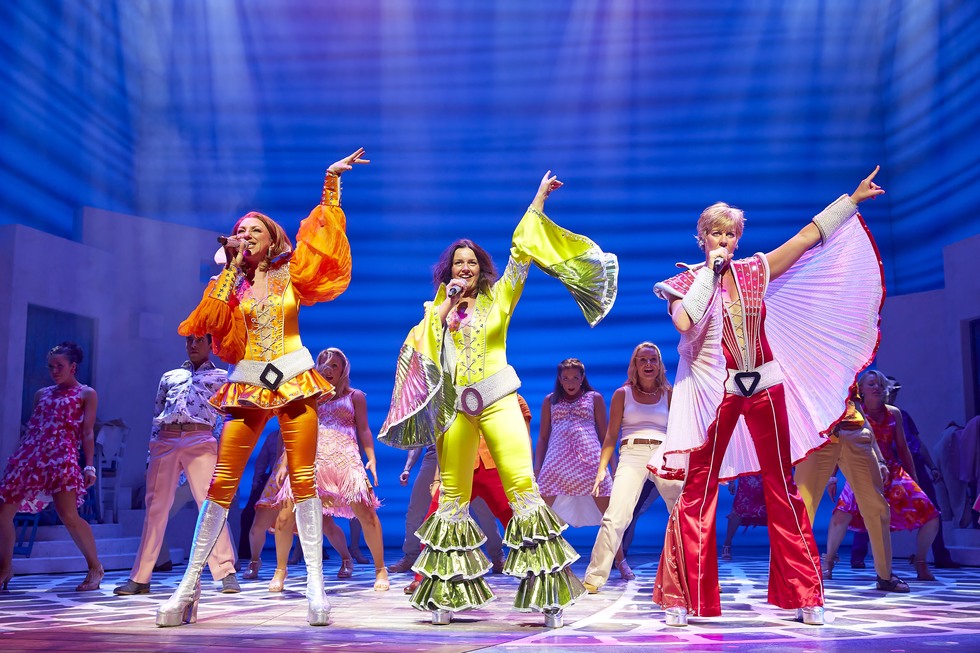 Royal Caribbean International
Mamma Mia!, Unabridged
Not all the entertainment is so esoteric. In a cruise line first, the entire script of a Broadway/West End show is performed. Most cruise lines make cuts to get their licensed Broadway musicals down to a manageable one-act size and pander to short attention spans, but the Quantum presents the unexpurgated ABBA jukebox musical Mamma Mia!, including a 15-minute intermission. The risk seems to be paying off. On the trip we took, nearly everyone stuck around for the second act. 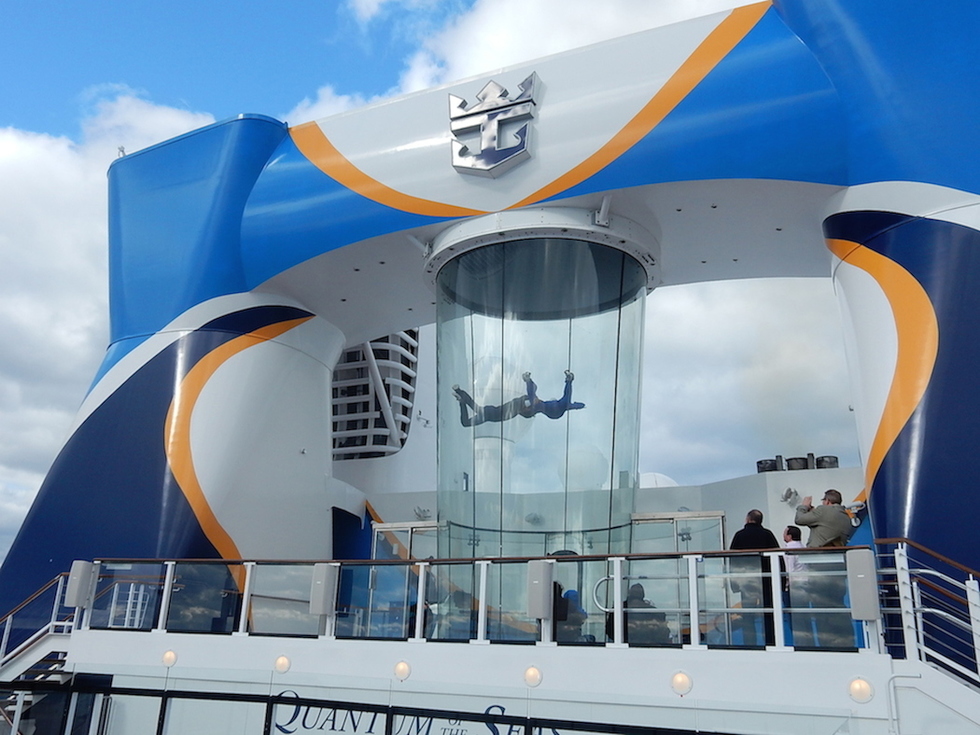 Jason Cochran
Ripcord by iFly
iFly is a chain of indoor skydiving locations around America. You put on a jumpsuit, get in the tube, and mighty turbines blow air upward, simulating the weightlessness of skydiving. An instructor is on hand to teach you the finer points of body posture so you can learn to ride the wave of air, but with only a few minutes to get the knack (and with a crowd watching you do it through the clear cylinder), you may want to pay for a few tries before you feel truly competent. The insulation is remarkable; from outside, you can barely hear the roar. 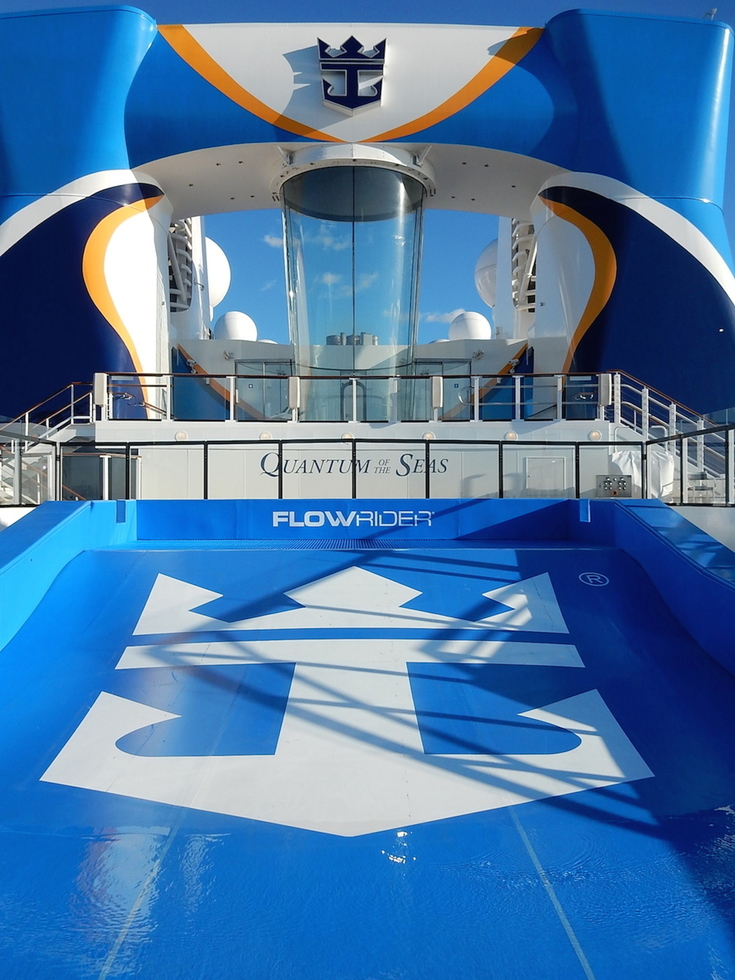 Jason Cochran
FlowRider
Beneath iFly you'll find the sheet wave machine where passengers can boogie board high above the seas. This faces the back of the ship, so beneath you, the wake of the ship trails off into the distance. This one is on some other Royal Caribbean ships, including the Oasis and Allure of the Seas, so it's nothing new. (It also is only turned on in appropriate weather and at appointed hours; in this shot, it's off.) 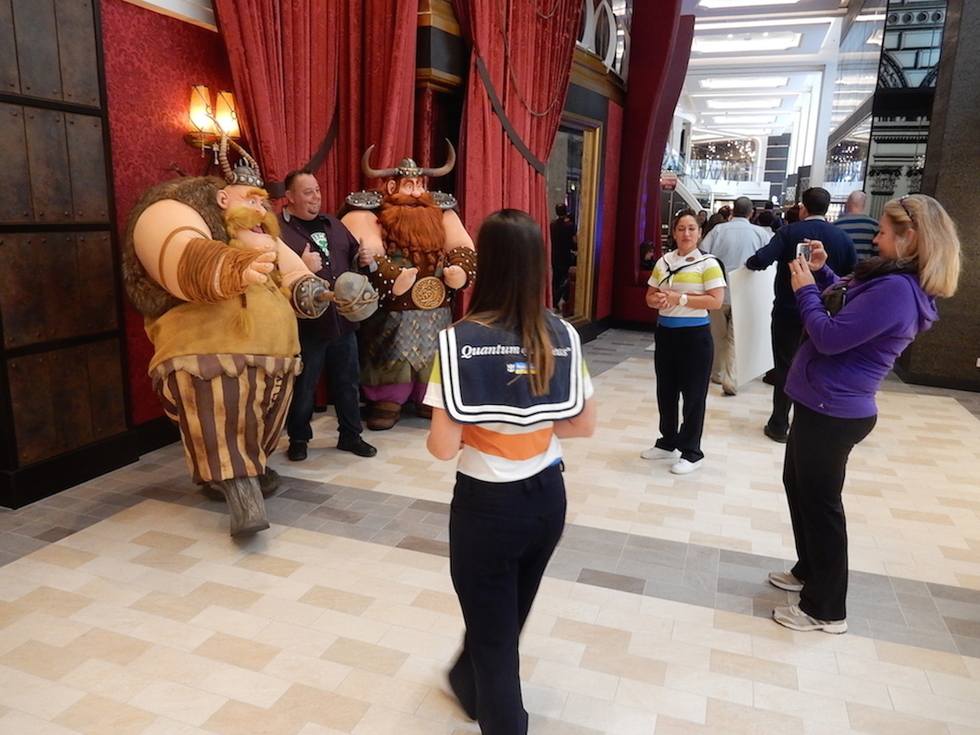 Jason Cochran
DreamWorks
The animated movie studio division of DreamWorks has a partnership with the Quantum, and the fruit of that include a character breakfast for kids, a Madagascar-themed splash area at the top-deck pool area, and occasional character sightings of the likes of Shrek and Fiona (in French aristocratic garb and performing a courtly dance) or these Vikings from the How to Train Your Dragon series. As you can see, it's not just children who get excited. 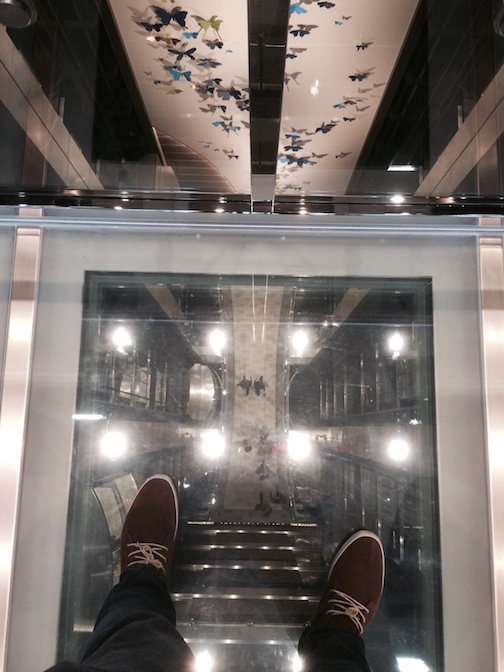 Jason Cochran
Thrill panel
Not all the fun touches are advertised by the line. Test your derring-do by standing on this clear acrylic panel 10 stories above the floor in the main elevator atrium. The crew on the bridge have two panels like this of their own which they use to make sure docking is going well. You're not allowed to use those, but this one is just as thrilling. 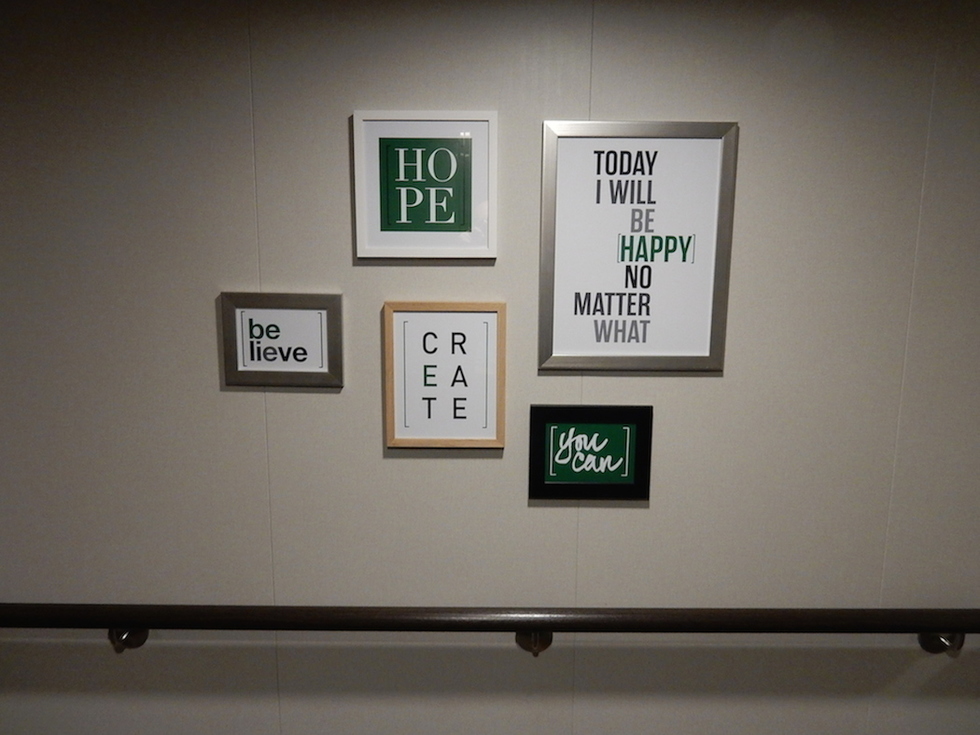 Jason Cochran
Corridor artwork
The artwork throughout the ship is a little odd. Much of it consists of positive messages such as these. The Quantum seems to think you're depressed and could use a lift. It's not so bad, Quantum!
Cruise
advertisement
advertisement