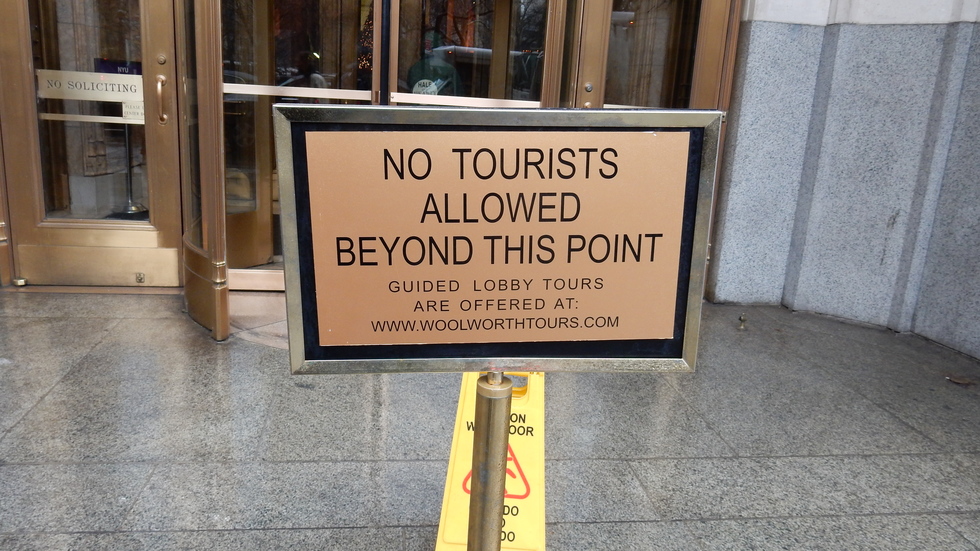 The Whimsical Wonders of the Woolworth Building, Forbidden for Years

By Jason Cochran
The Woolworth Building was once a household name. The tower in Lower Manhattan was opened by Frank W. Woolworth, magnate of the five-and-dime, in 1913, and paid for—in cash, no mortgage required—for $13 million amassed from nickels and dimes. It was the headquarters of Woolworth's, the Walmart of its day, and for 17 years, it stood as the tallest building in the world.

It may be on the National Register of Historic Places, but that doesn't mean the general public is allowed to walk right in. When you try to enter the lobby on Broadway opposite City Hall Park, you're abruptly stopped by this sign. The Woolworth Building may be a National Historic Landmark, but tourists are not welcome to walk in off the street.

But those in the know can find a way around that: You can book a tour of the grand lobby (Woolworth Building Lobby Tours, 203/966-9663, www.woolworthtours.com). The tour is one of the best-kept secrets for history nuts visiting New York City, and Frommer's took one of these little-known tours with Helen Post Curry, the great-granddaughter of the Woolworth Building's equally legendary architect, Cass Gilbert. She guided us through her prized family legacy and pointed out the rarely seen quirks and easter eggs of this fantastical icon of world skyscrapers. 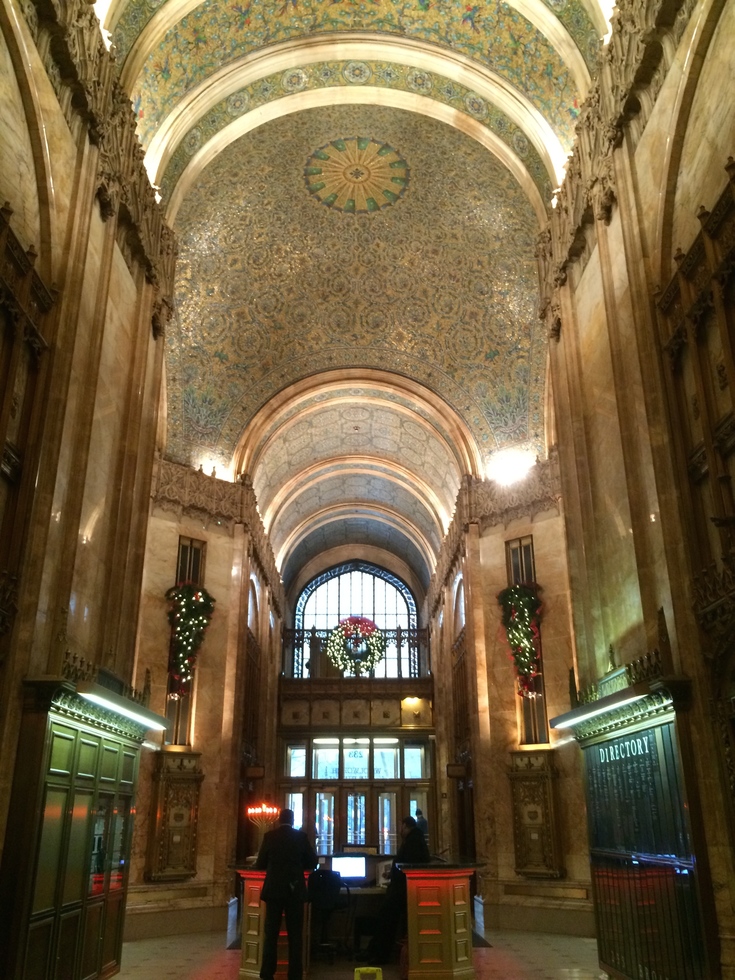 Jason Cochran
The Lobby
The richly detailed lobby, which isn't visible from the sidewalks of Broadway, soars heavenward in an arched, cross-shaped space that's nearly ecclesiastical in design. Why not? The building was erected as a temple to profit, with Woolworth serving as its high priest. The space, done in marble, glass tesserae, and gold leaf, was intended to proclaim Woolworth's stature—and to emphasize the wealth of the tenants who could afford to rent there. But despite the grand first impression, says Curry, it's "fundamentally a fantasy" with hordes of hidden faces, mysterious carvings of animals and sprites, and other silly, secular touches. We'll see those soon.
advertisement 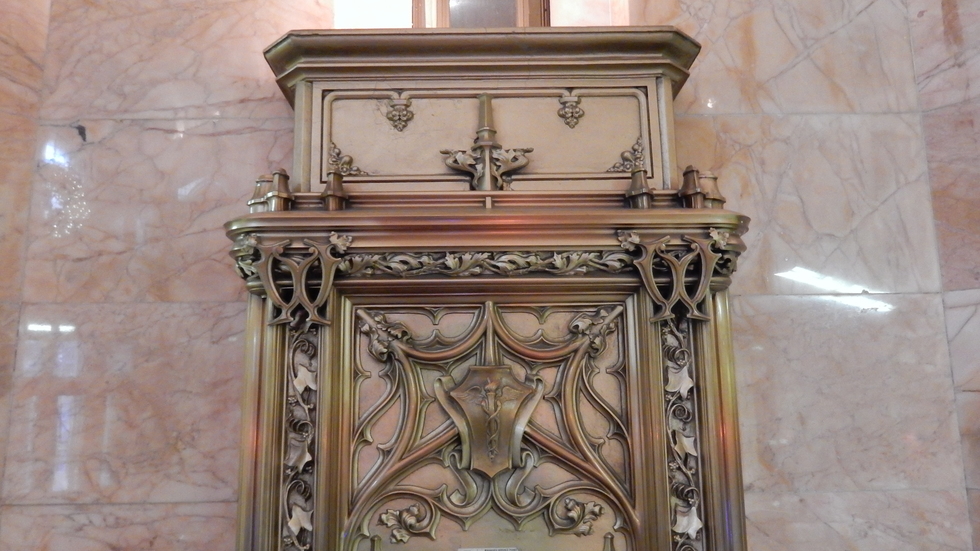 Jason Cochran
Post boxes
The post collection box at the bottom of the mail chute is intricately decorated with uppercase Ws—the insignia of the commercial magnate who commissioned them. 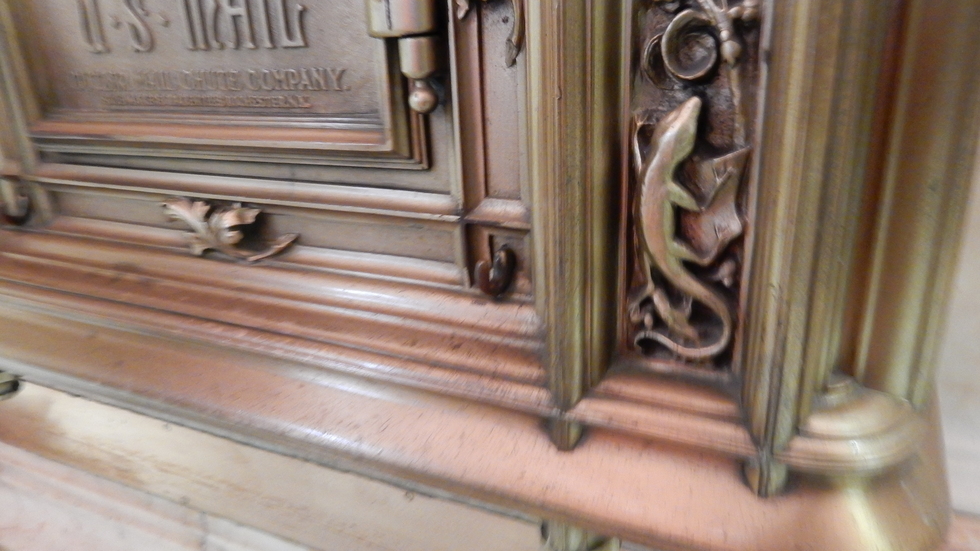 Jason Cochran
Hidden salamanders
Look closely and you'll find brass salamanders in the trim near the floor. In 1913, salamanders were a symbol for all things fireproof; to reassure people that their newfangled skyscraper was indeed safe to inhabit, designers nestled them in the decor throughout the lobby. This one is on the post box, but there are others by the elevators. The Woolworth Building was the first building to attempt high-speed lifts—no building had needed them before.  Naturally, the speed of the lifts and the altitude of the building made the public uneasy, so the salamanders were added as a symbol of security and strength. The building's creators invented the concept of express and local elevators just for the tower's unprecedented height.

The elevator cars were (and are) tiny, with barely enough room for six passengers—that part turned out to be shortsighted. But on 9/11, the tower stood firm despite being buffeted by debris from the collapsing North Tower a little over a block away. There was truth in this salamander after all.
advertisement 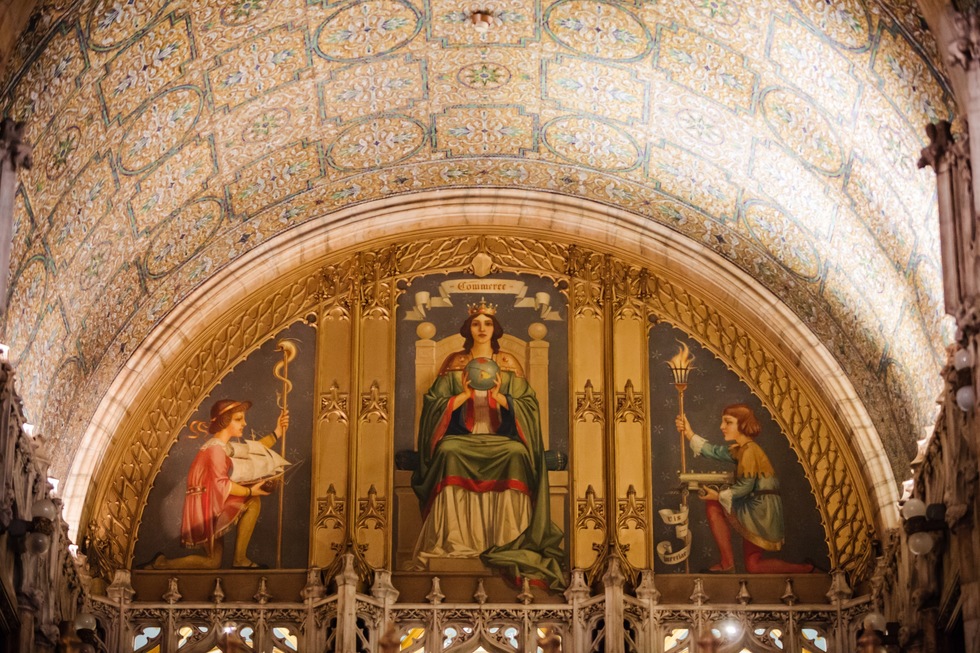 Thomas McGovern Photography
Commerce mural
The niches of the church-like lobby are decorated not with images of the Passion but with passionate images of money making by muralist C. Paul Jennewein. "The figures to left and right of 'Commerce' represent transportation with a clipper ship and a locomotive," explains Curry, the great-granddaughter of the architect, and a frequent tour guide. "The figures to the left and right of 'Labor' [on the lobby's opposite side] are offering grain and fruit. Both are clearly in the Christian triptych alterpiece tradition and, according to Gail Fenske in her definitive book on the Woolworth Building, The Skyscraper and the City, they further promote the sense of a romanticized version of commerce and labor." 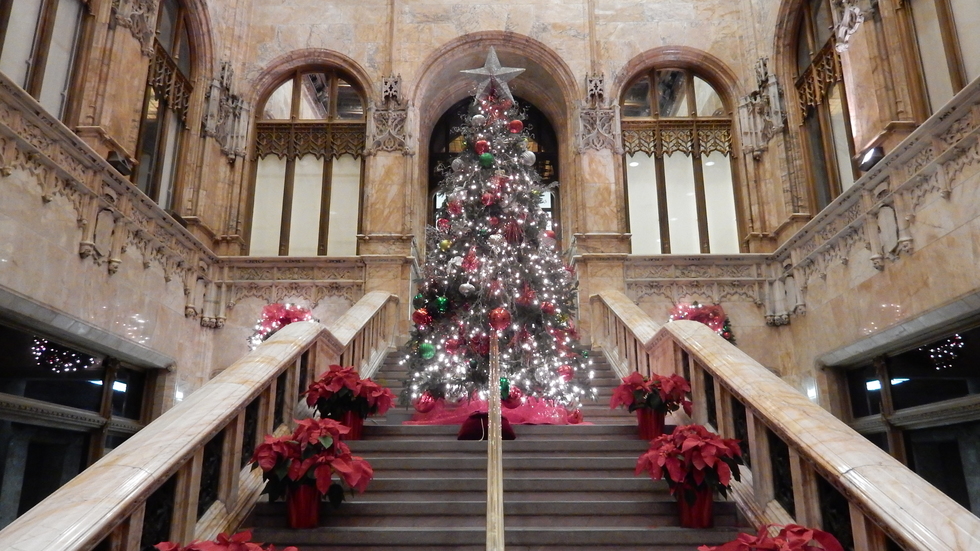 Jason Cochran
Grand staircase
The sweeping grand staircase at the back of the main lobby (seen here during the holidays) originally led to the Irving National Bank, which was founded in 1851 and was headquartered just above the lobby of the Woolworth Building when it opened in 1913. On the day the building opened, its lights were turned on by President Woodrow Wilson using a switch in Washington, D.C.
advertisement 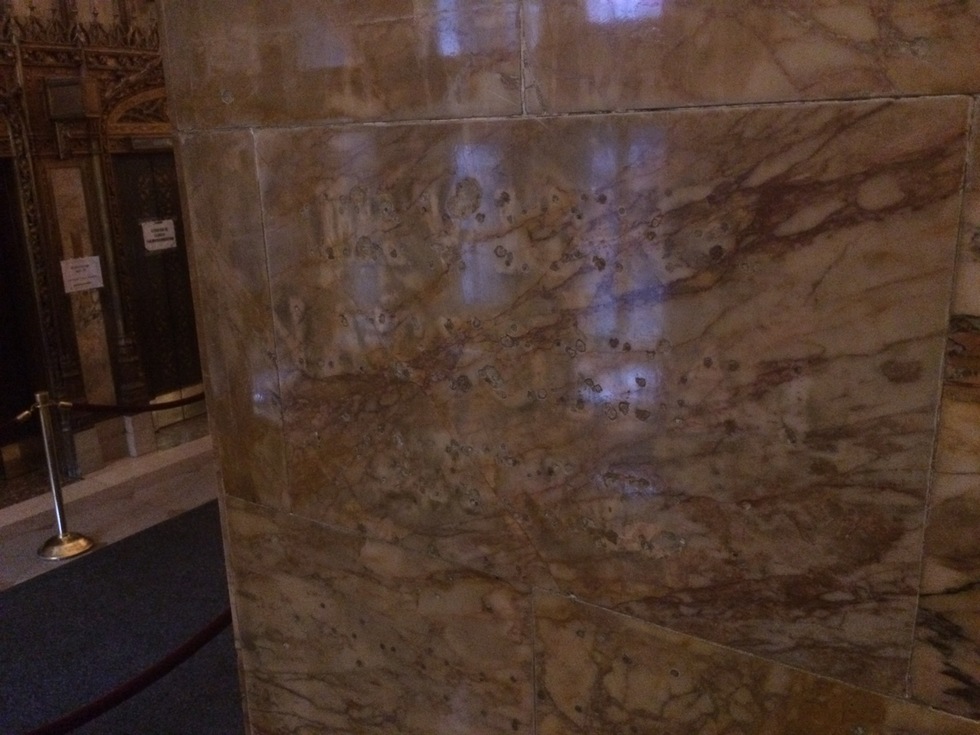 Jason Cochran
Ghost sign
Look closely at the marble and you can see the ghost of the old sign for the Irving National Bank—even though it moved out in 1931. 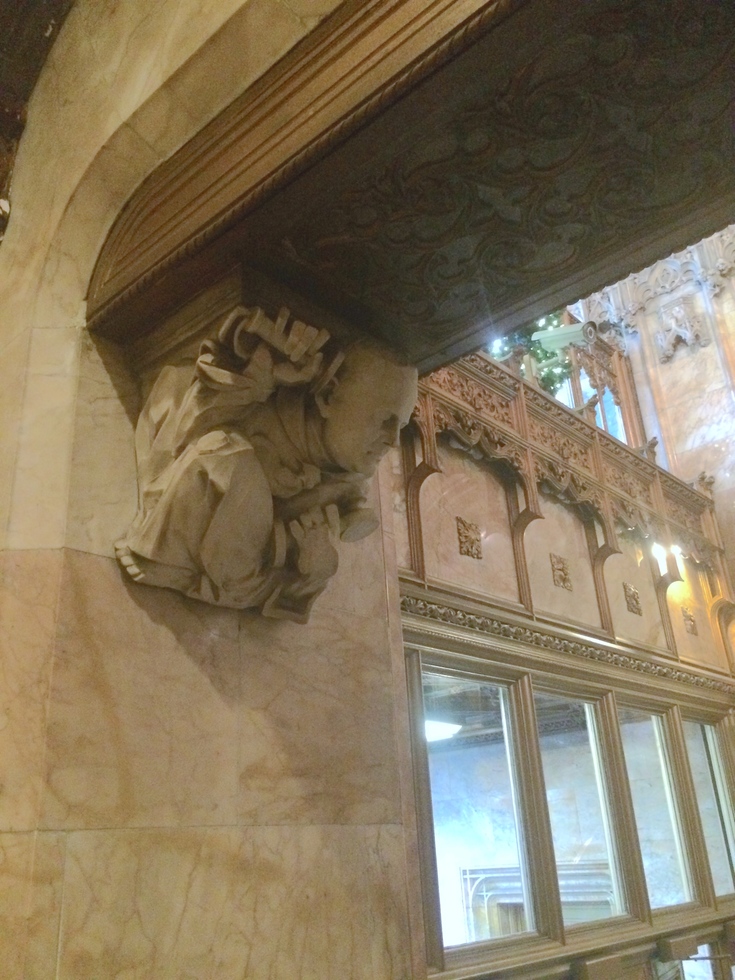 Jason Cochran
Corbel caricature
Often unnoticed overhead are corbels honoring various men associated with the construction of the tower. This one by the main entrance, appearing to hold up a rafter, is Louis Horowitz, head of the Thompson-Starrett Construction Company. He's shown talking on a two-piece telephone because according to Curry, he "was constantly on the phone managing the whole construction project and ordering the delivery of supplies to coincide with when they were needed [on site], thereby avoiding delays and allowing the entire thing to be done in only three years due to his efficiency."
advertisement 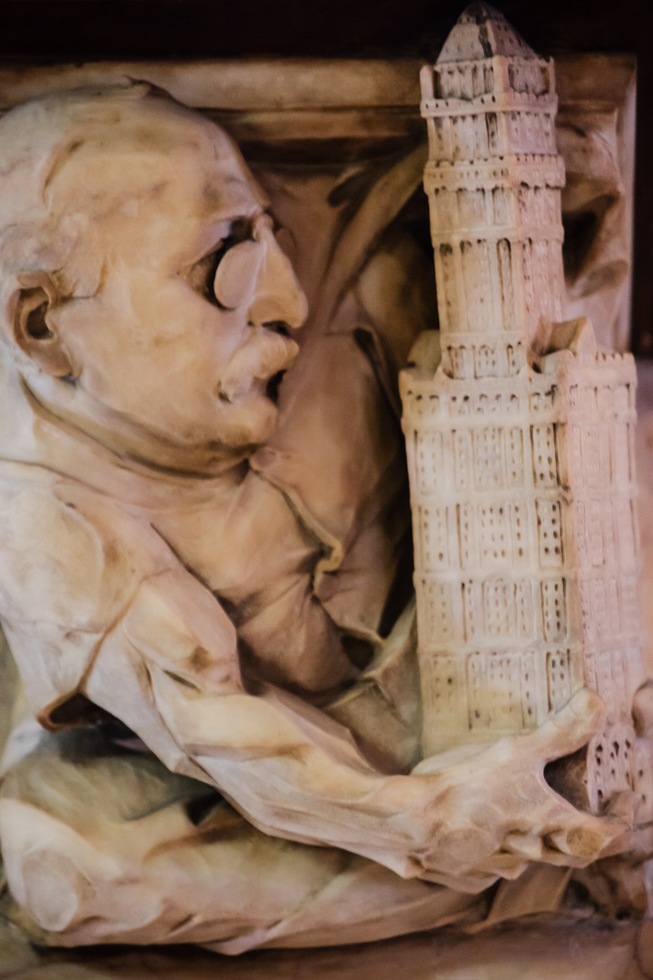 Thomas McGovern Photography
Gilbert corbel
This corbel, near the southern central elevator bank, is of Cass Gilbert, the celebrated architect of the building (and Curry's great-grandfather), who later worked on the U.S. Supreme Court building. He eternally cradles his creation in miniature. 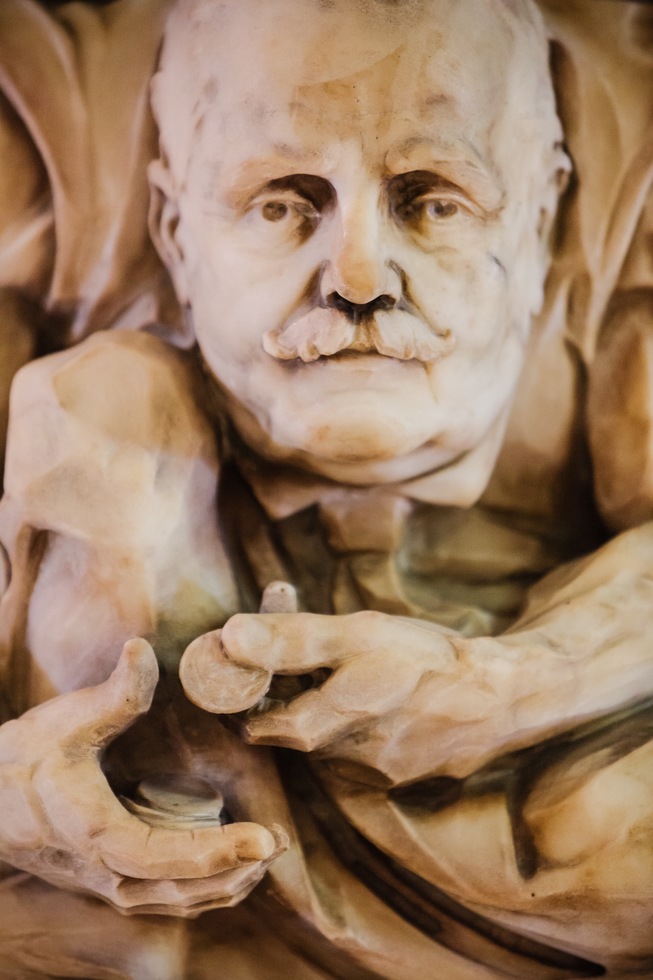 Thomas McGovern Photography
Woolworth corbel
This corbel, facing west, is of Woolworth himself. He's rubbing one of the coins that, at the zenith of his power, made him worth $6.5 million. That's more than $150 million today, and such a fortune is why he could afford to skip a mortgage and simply write checks to pay for his building's construction. He didn't have long to enjoy his triumph; he died five years later, just shy of 67 years old.
advertisement 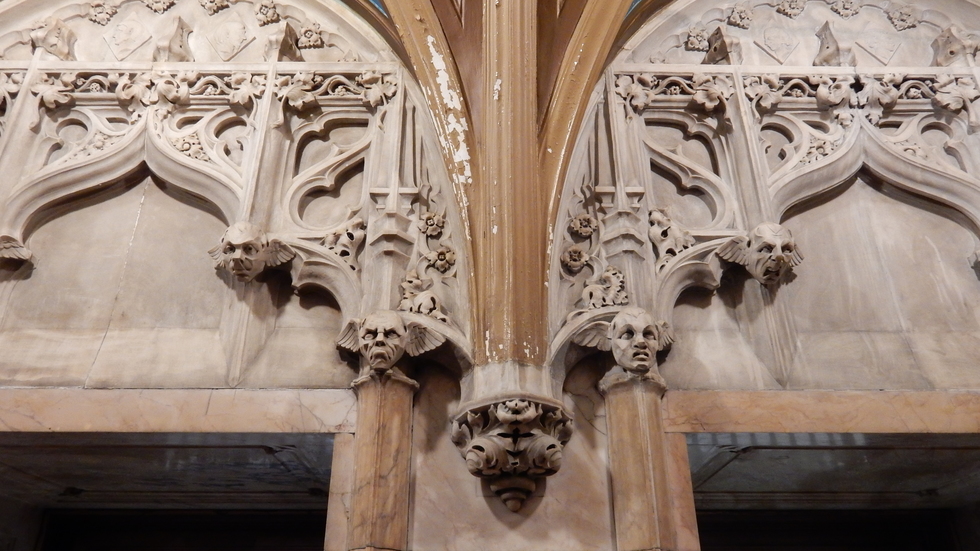 Jason Cochran
Faces everywhere
As with so much great American architecture completed before the Great War, the pleasures are in the details—and in marveling at the frivolous touches that Gilded Age wealth could afford. We don't know what these faces were—goblins? sprites?—but they're all over the decor. 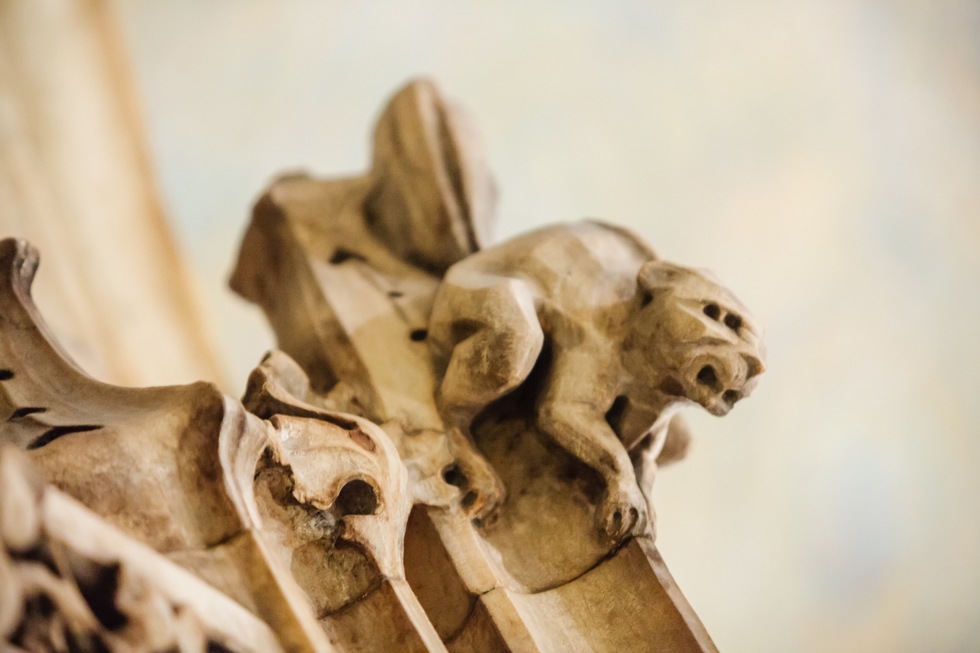 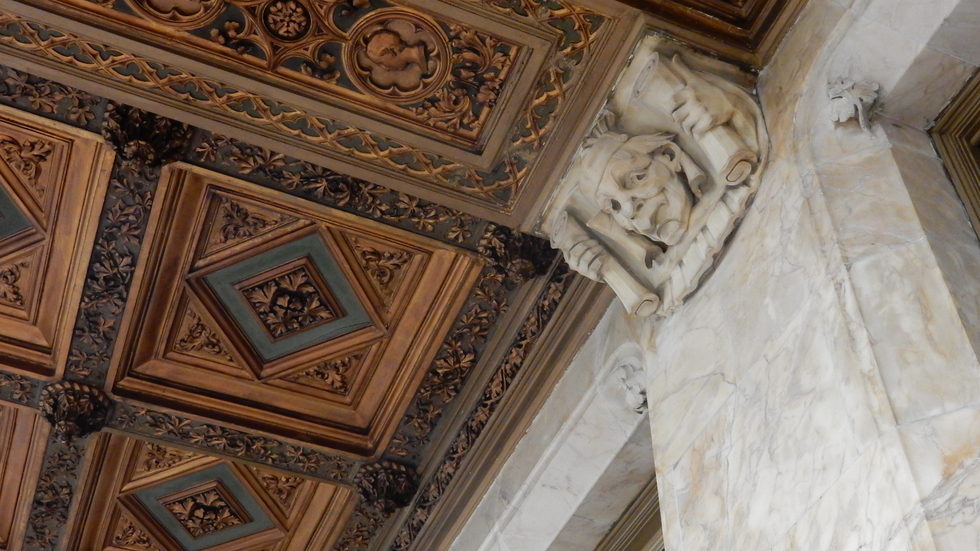 Jason Cochran
Scroll faces
Also a mystery are the many individual faces emerging from scrolls at the ceiling. Each one is unique and fantastical. 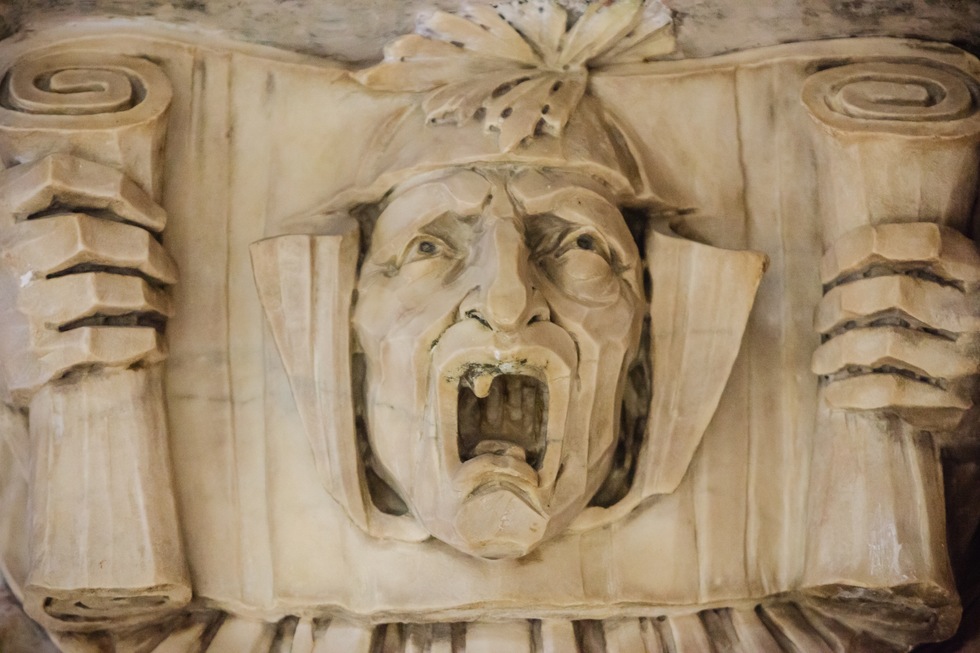 Thomas McGovern Photography
Scroll face
Here's one up close. Says Curry: "I don't think we have any idea about the faces in the scrolls but they are certainly extremely expressive and have a vague literary or theatrical feeling to me."
advertisement 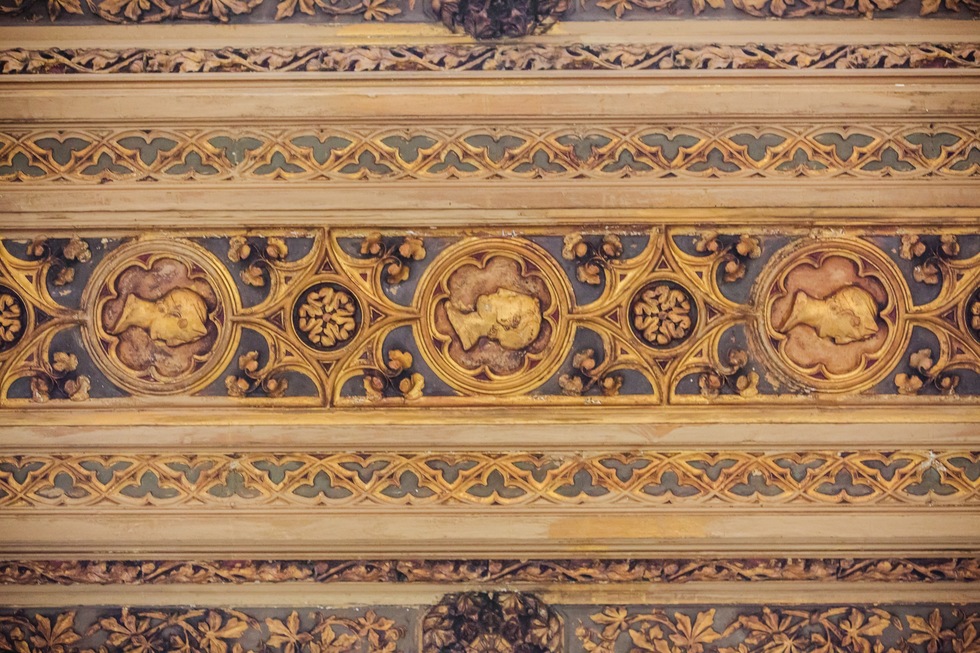 Thomas McGovern Photography
Carved ceiling
We don't know who, if anyone specific, is depicted by the profiles embedded in the ceiling, either, although Curry suspects they were not of anyone in particular and purely decorative. "The mosaic ceiling in the front part of the lobby, and the stained glass window over the grand staircase, were done by the firm of Heinigke and Bowen, who were certainly as well-known and well-respected as Tiffany Studios at the time," she says. 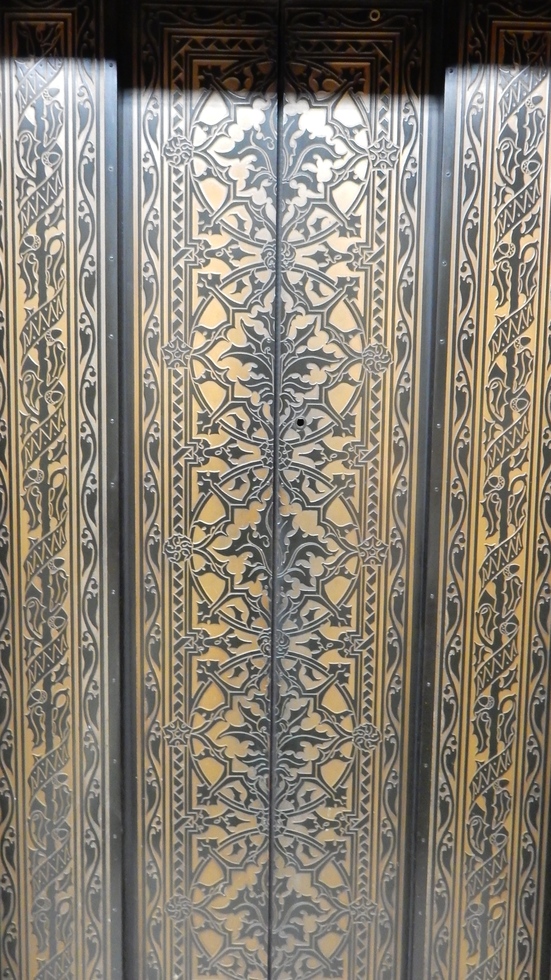 Thomas McGovern Photography
Tiffany elevator doors
Speaking of Tiffany, his team didn't only create beautiful lamps—it created the elevator doors here, on the tallest building of its day. Through these doors passed some of the people involved in the network of companies and labs who developed the atom bomb as part of the Manhattan Project. On the 11th, 12th, and 14th floors, a front company secretly gathered top physicists who devised a way to manipulate uranium's isotope, a key step in the development of the bomb.
advertisement 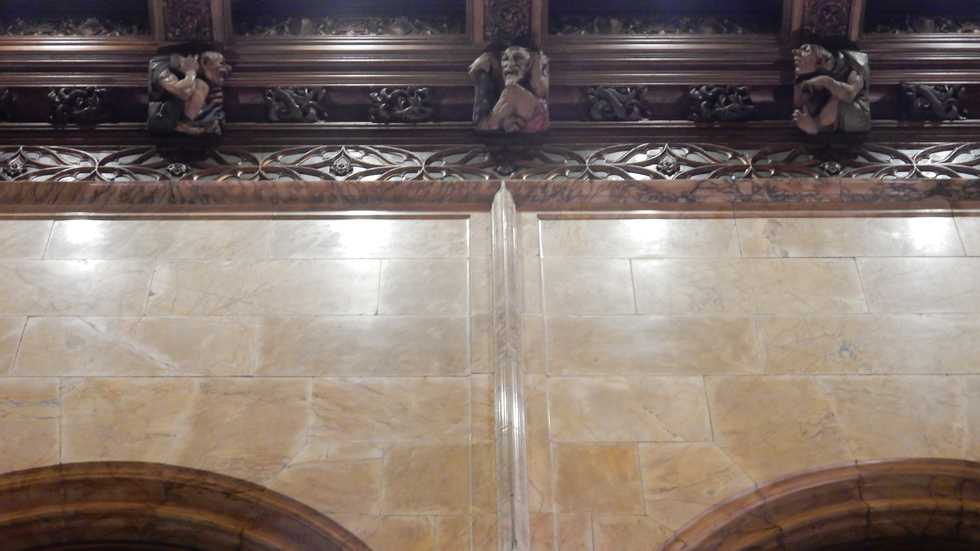 Jason Cochran
Guildhall-style wooden figures
All around a glass ceiling toward the rear of the lobby, where the pseudo-cathedralled arches of the ceiling give way to a squarer form and more wooden detailing, there are squashed rectangular figures affixed near the joints.

Curry's theory: "I think they are a stylization of the many craftsmen working behind the scenes to create the building, and it makes sense to show them in the section of the lobby where the architecture harks back to a northern European Guild Hall style." 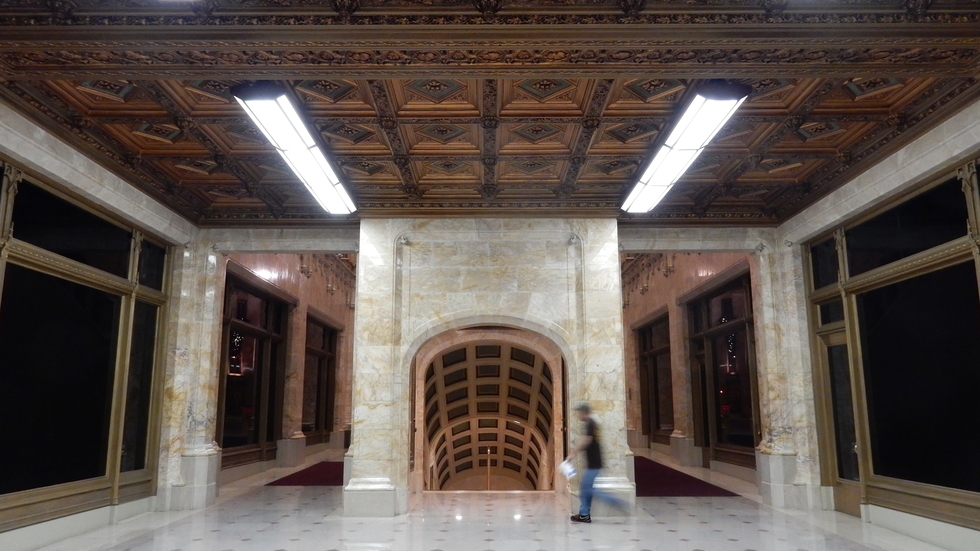 Jason Cochran
Private subway entrance
To attract the most exclusive tenants, the building originally had its own platform on the New York City subway, then just a decade old. A private passage, now sealed off, led to the BMT (the City Hall stop, closed since 1945) and IRT systems (the Park Place station). Today, the lower level is used for bike storage by office workers.
advertisement 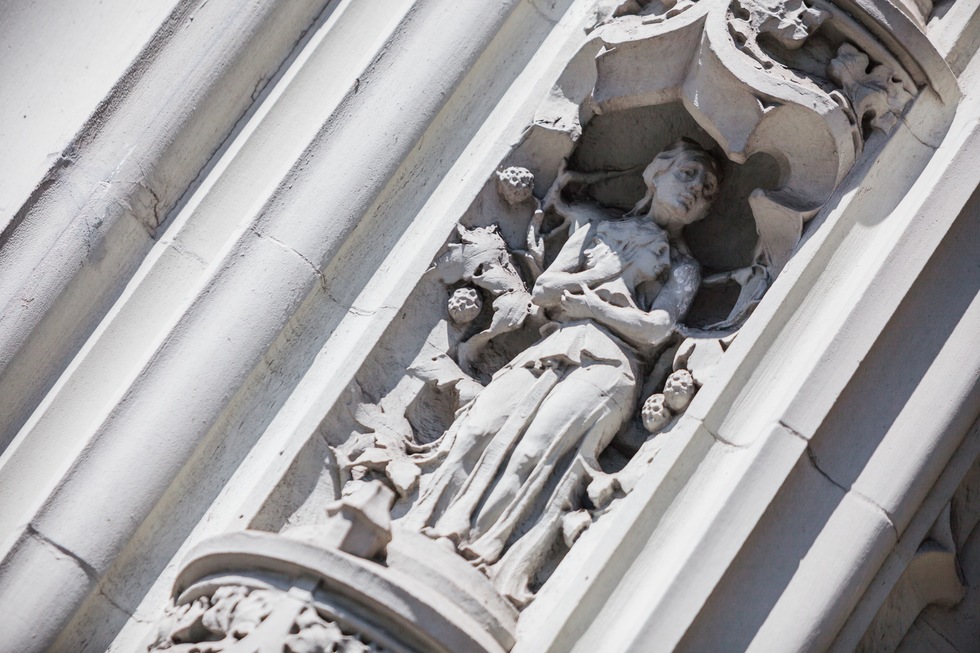 Thomas McGovern Photography
Allegorical figures
Back outside on Broadway, the entryway is lined with small sculptures. What do these strange figures represent? Curry: "I am not exactly sure, but they are certainly allegorical figures reinforce the notion of worldwide industry, commerce, and labor." 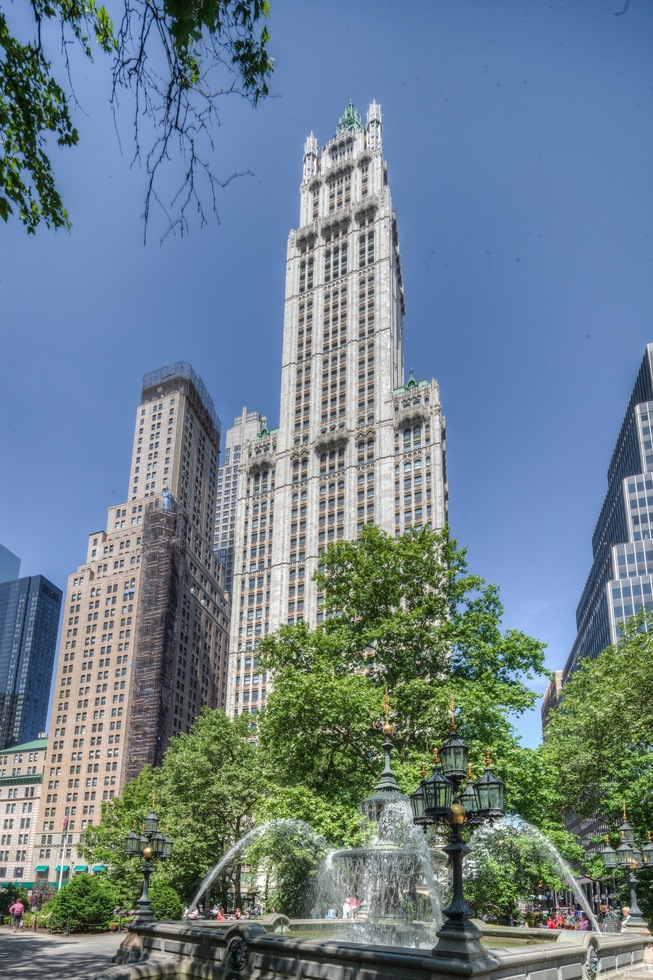 Thomas McGovern Photography
The Woolworth Building
Would you like to see these fantastical artistic flourishes for yourself? Well, there are three ways. You could rent an office in the lower 30 floors. Or you could buy a condo in the upper half of the Tower—the penthouse unit, which consumes seven floors including the original tourist observation deck (closed to prevent spying during World War Two), will cost you $110 million.

Or, if you're not a Russian oligarch looking for a safe place to park your fortune, you can choose the third way to explore the Woolworth's riches: You can take one of the guided tours. There are 30-, 60- and 90-minute versions which are always conducted in very small groups due to the cramped 1913 proportions of the lobby. There are seven approved guides, each with their own scholarship speciality, including (occasionally) Curry herself, who tells appreciative visitors about the towering legacy of her iconic great-grandfather, architect Cass Gilbert.