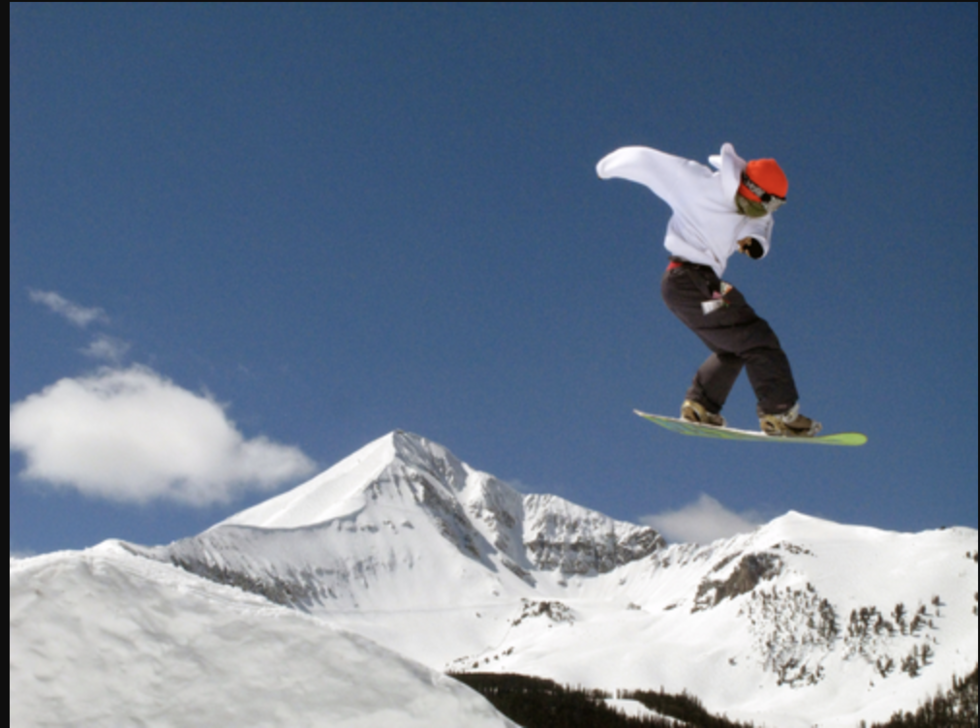 The 10 Most Extreme Snowboarding Terrains

By
By Lois Friedland, Photo Editing by Amarelle Wenkert

Major to moderate steeps, perhaps a chute or three, and glades where good carvers can slide between the trees—these are the types of terrain where you’re liable to find expert snowboarders who are looking to ride in ungroomed territory. Here’s a list of resorts filled with areas to entice riders seeking extreme terrain. Boarders who like to cruise and carve down groomed and manicured slopes will find plenty of choices, too. 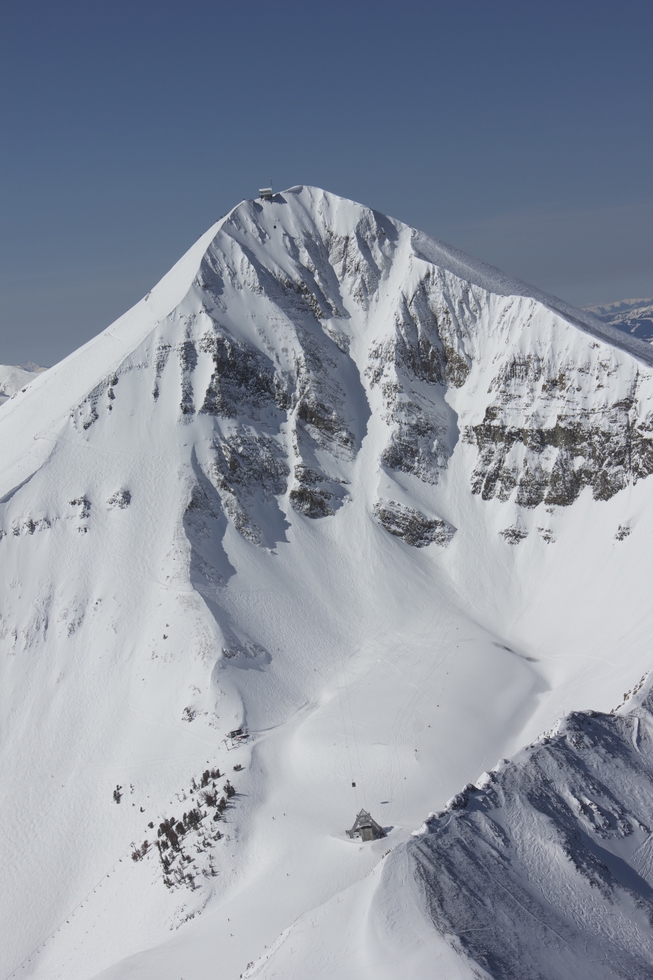 While riding up the Lone Peak Tram at Big Sky, much of the extreme terrain is within view. You’re at the peak of the resort and the only way down is via steep routes, such as the Gullies. If you and a buddy have the proper avalanche gear and experience, you can check out with ski patrol to challenge Big Couloir, with its 53-degree pitch near the top. Boarders’ favorite runs include the natural half-pipe located off the Swift Current high-speed quad chair next to Lower Morning Star and Shedhorn, which they call Shredhorn. Boarders who want to carve head up the high-speed quads on Andesite Mountain for fast runs down. tel. 800/548-4486; www.bigskyresort.com. 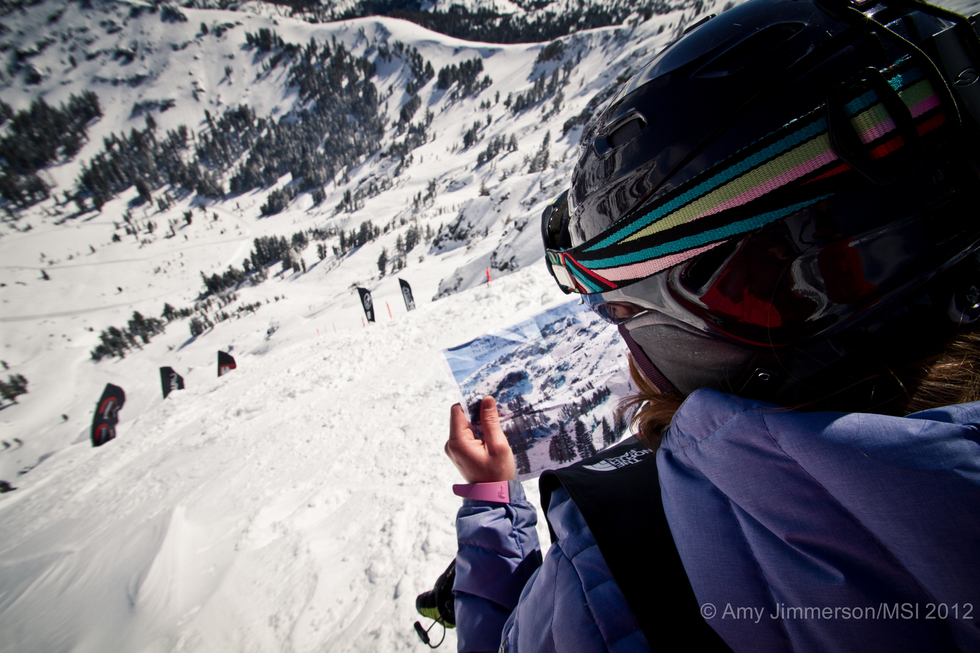 This small resort is tucked away from the main hubbub of South Lake Tahoe, but it’s worth the drive over Carson Pass to frolic on the high-altitude open bowls, chutes, and steep runs that fall off of a horseshoe-shaped ridgeline. Many of the slopes are north-facing, so they hold snow well into the spring. Add on an average annual snowfall of 40 feet (12m) and you have the making of an extreme place to rip up the mountain. tel. 800/967-7500 or 209/258-6000 for lodging, 877/KIRKWOOD [547-5966] for conditions; www.kirkwood.com. 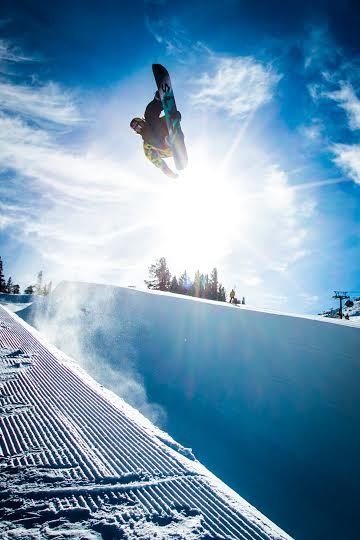 The sheer number of slopes and the length of the resort’s season—often late October into June—make this a popular place for snowboarders. Freestyle riders can be found jibbing on the rails in the terrain parks, which are designed for different levels, from the Disco Park where groms and other beginners tackle small bumps to the Unbound Main Park where freestylers perform radical maneuvers such as 720s. Riders catch big air in the 22-foot-tall (6.6m) Super Duper Pipe. tel. 800-MAMMOTH [626-6684] or 760/934-2571; www.mammothmountain.com. 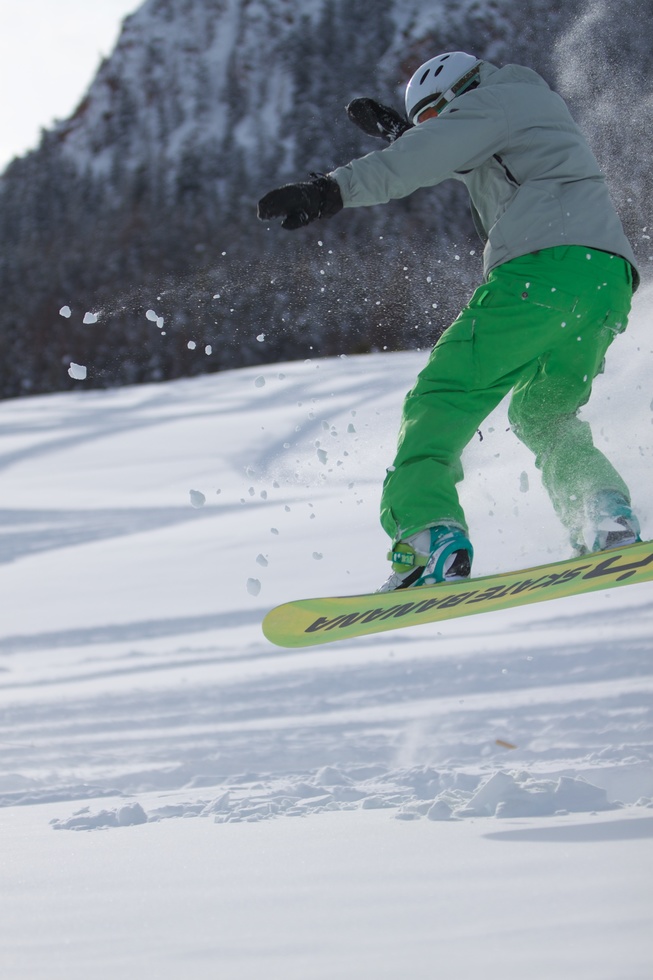 Here, there are lots of lines for snowboarders. Newbies can learn on the lower half of Apres Vous Mountain. Casper Bowl has a mix of terrain for intermediate to advanced boarders. The North Hobacks and the Headwall are popular spots for skilled boarders. Grand is an amazing cruiser for carvers who enjoy groomed runs. Jackson Hole offers clinics for advanced snowboarders and skiers who want to learn to enjoy the off-piste terrain that surrounds the resort. tel. 888/Deep-SNO [333-7766] or 307/733-2292; www.jacksonhole.com 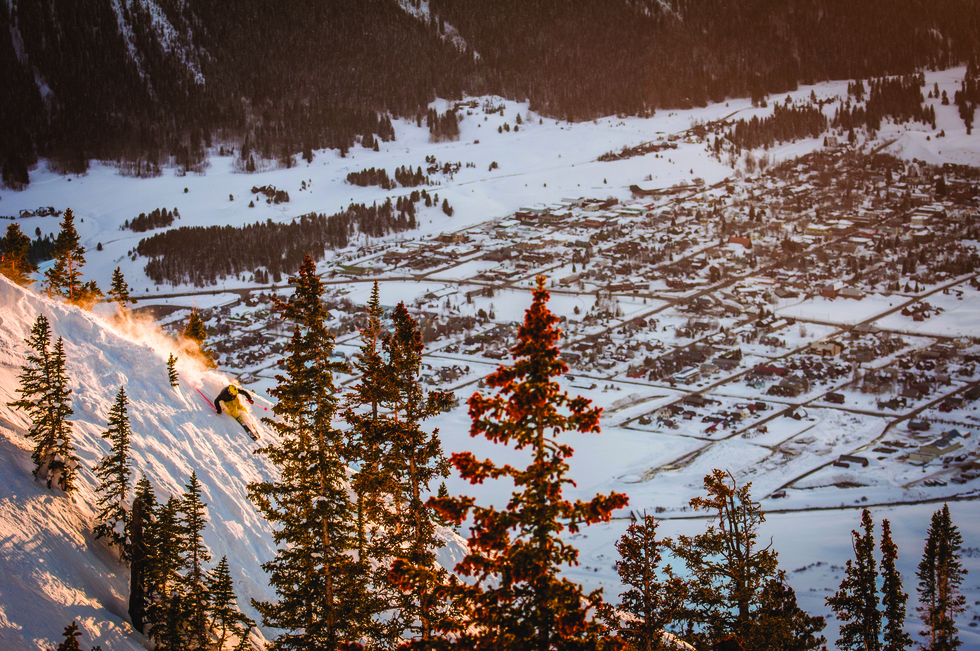 The steeps, bumps on trails, couloirs, chutes, and overall terrain on Crested Butte’s North Face attracts extreme snowboarders and skiers. Names like Headwall, with its steep, rock-strewn face, and Banana Funnel, with its ultra steep tree runs, are mouthed reverently by the excess of excellent boarders who play on the slopes here. Crested Butte holds the U.S. Extreme Ski and Snowboard Championships every year. tel. 800/810-7669; www.skicb.com. 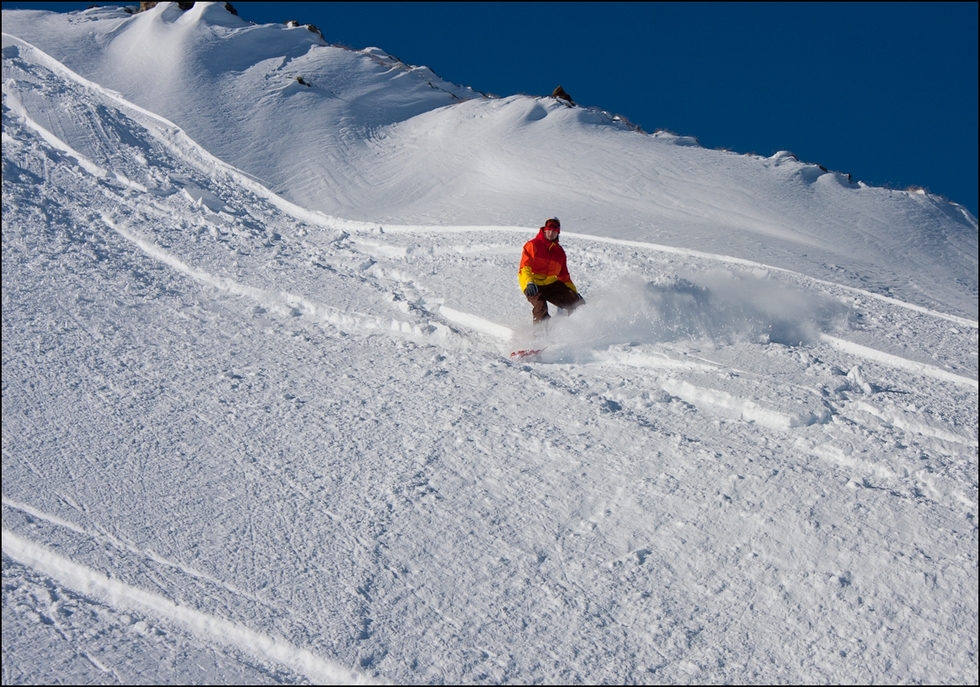 Snowboarders congregate at Livigno because the prices are low and party quotient is high. This duty-free, high-altitude resort is in northern Italy near the Swiss border. Most of the slopes are wide open, and with the Alta Vatellina lift pass, boarders can explore the slopes around Bormio and Santa Caterina, too. Some of the toughest terrain at Livigno is off the Mottolino gondola. The terrain park there has a half pipe, jumps, rails, and a bordercross course. tel. 39/342-05-22-00; www.livigno.eu/en. 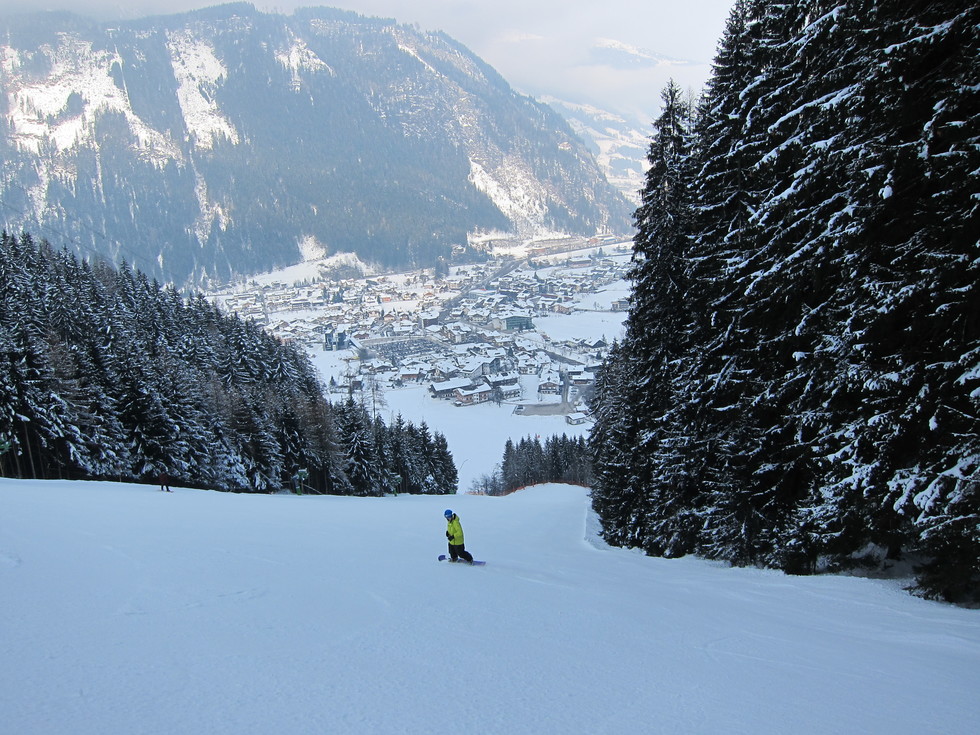 This ski town in the Zillertal Valley is an easy train ride from Innsbruck. You can board in the popular Gerent area, or buy the Zillertal Super Skipass, which opens up 502km (312 miles) of trails and 160 lifts. With the pass, you can ride on trails moving from one lift to another. If you end up in another town simply take a bus back. The Hintertux glacier isn’t far from here. The Vans Penken Park in Mayrhofen is lauded as one of the best snow parks in Europe, with terrain for big tricks in the Pro line, and gentler rails and kickers in the Public line. tel. 43/528/567-60; www.mayrhofen.at. 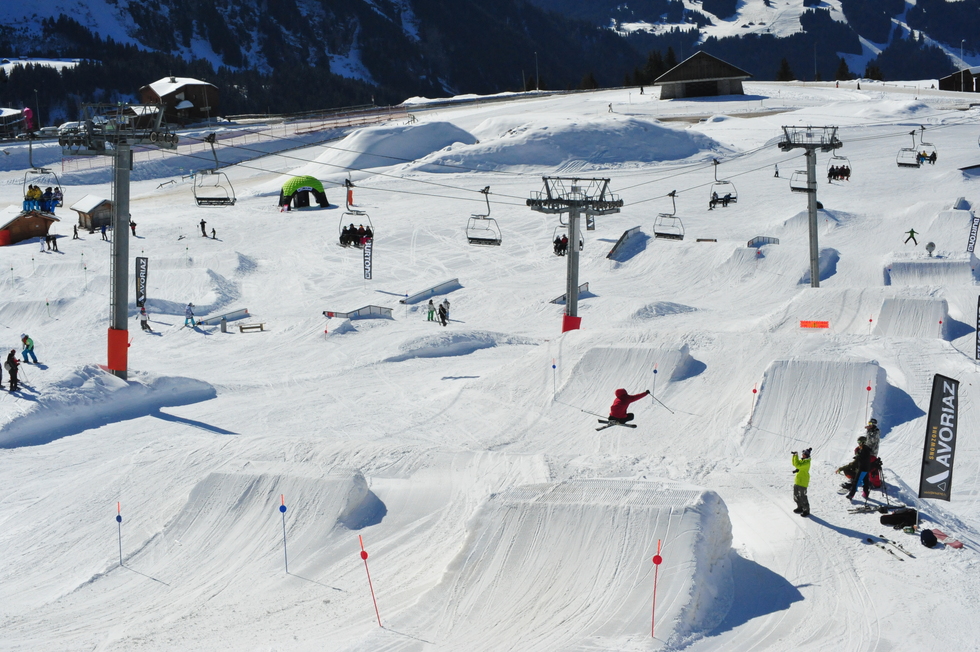 One of the first European resorts to embrace snowboarding, Avoriaz has four terrain parks and a half pipe. Avoriaz boasts The Stash, an ecological snow park designed by snowboarding guru Jake Burton. The Biotop has a long jib-monster. Arare is filled with advanced kickers, corner jumps and rails, and a superpipe. La Chapelle is for newbie freestylers still perfecting their skills. Avoriaz is linked to Les Portes du Soleil, a group of resorts straddling the French/Swiss border, where there are off-piste areas for shredding. tel. 33/450/74-02-11; www.avoriaz.com/ski-holidays. 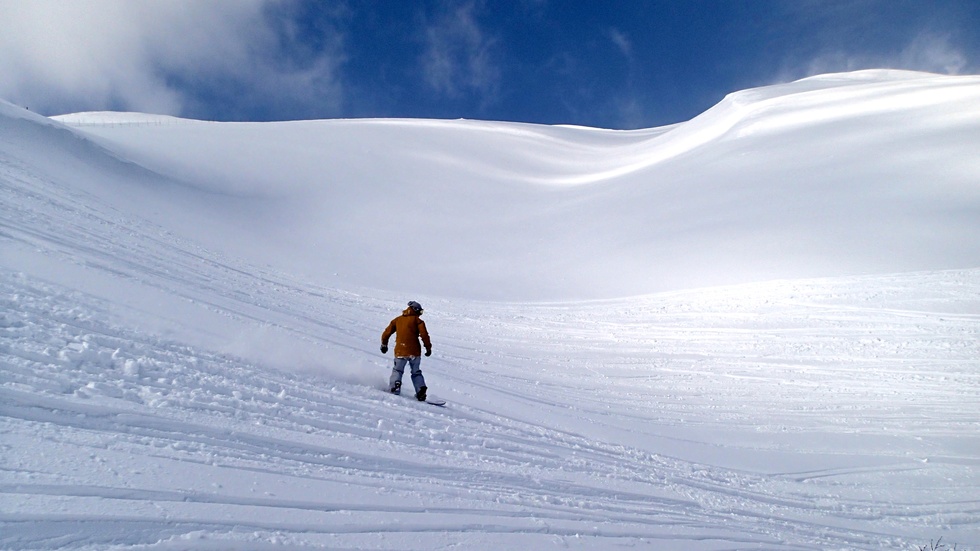 According to Forbes Magazine, Niseko is the second snowiest ski resort in the world, receiving an average of 1,511cm (595 in.) of snow annually. You can snowboard at night at the Niseko Hirafu area, because a large portion of the mountain is illuminated until 9pm. Take the gondola up and you can board on groomed terrain or in and out of the trees. The Niseko terrain park and half pipe, also lit in the evening, has large tabletops, rails, and kickers. Wonderland Park has spines, waves, hits, and rails for various skill levels. www.niseko.ne.jp/en. 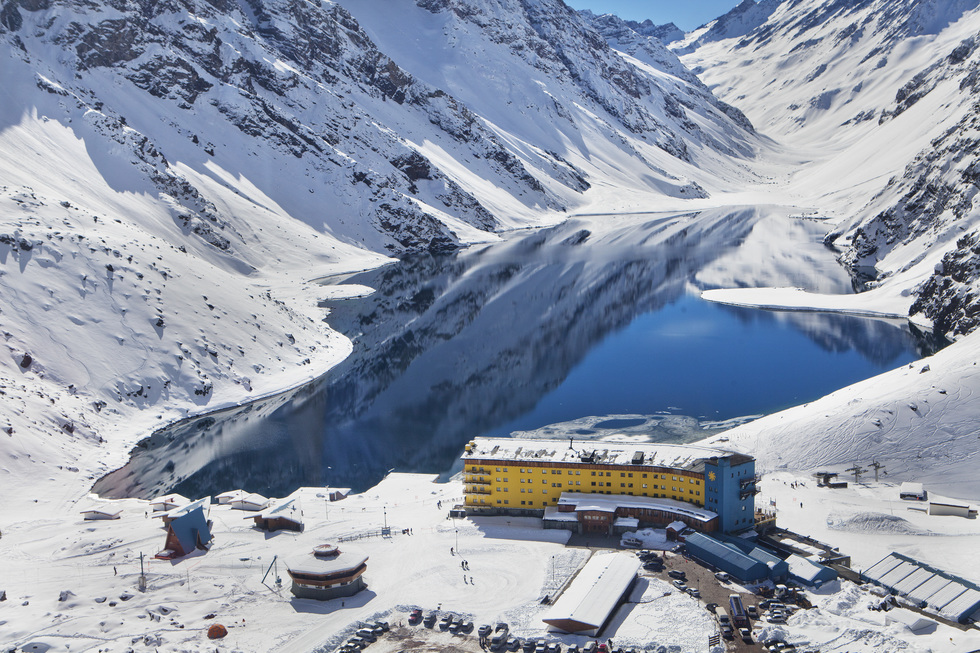 One of the biggest advantages to snowboarding south of the equator is that resorts there are just getting their season started while those in the northern hemisphere are closing up shop. Come to Portillo, the oldest ski area in South America, located in the Andes mountains near Lagune del Inca (Inca of the Lake). With 14 lifts and a relatively small crowd, snowboarders can go all day without having to fight the masses. Portillo’s amazing mountain views, international ski- and snow-school instructors (many of whom are past Olympic medalists), and friendly South American locals offer a refreshing change of atmosphere from many of the U.S. and European snowboarding destinations. tel. 56/2/2630606; www.skiportillo.com.