By Gretchen Kelly
"Set-jetting" means traveling on inspiration from your favorite films or TV shows. More and more destinations are banking on the hope that blockbuster movies or hit Netflix shows filmed in their location will lure you to book a trip yourself. Just as Hollywood awards season bestows gold on the best films and TV shows of the year, we're tipping our own hats to the best "set-jetting" destinations of the year. 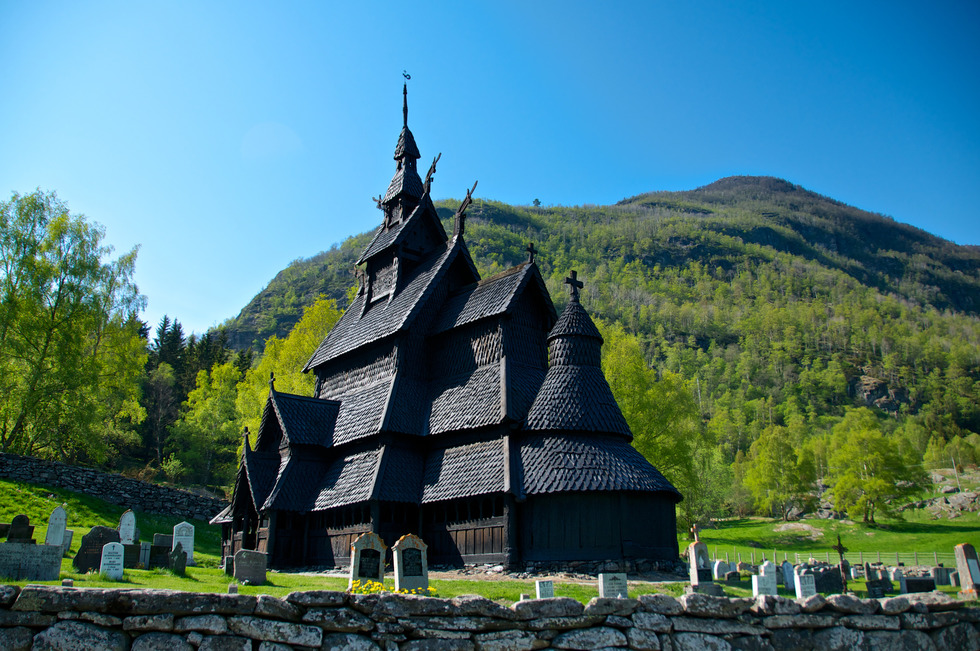 Courtesy, Visit Norway
Norway
Adventures by Disney's Frozen adventure to Norway was born in 2014 after the film that urged everyone to "let it go" got everyone going to Norway. Visit Norway says the movie has helped boost U.S. arrivals to its country by 32%.

Disney's Frozen package tour is an 8-day, 7-night trip that starts at $5,639 for adults (not including airfare). That's pricey, but some people are obviously willing to pay it to take in many of the sites that inspired the film's designers: the famous Stave churches, those pristine fjords, and the charming town of Bergen that has also been seen in children's film classics such as The Witches. Disney's journey includes all meals, Norway-side travel arrangements (a bus and a high-speed train ride) and entrance fees.

Princesses Elsa and Anna may have lived in the fictitious Arendelle, but Norway, one of the most expensive countries in the world, is reaping the benefits.
advertisement 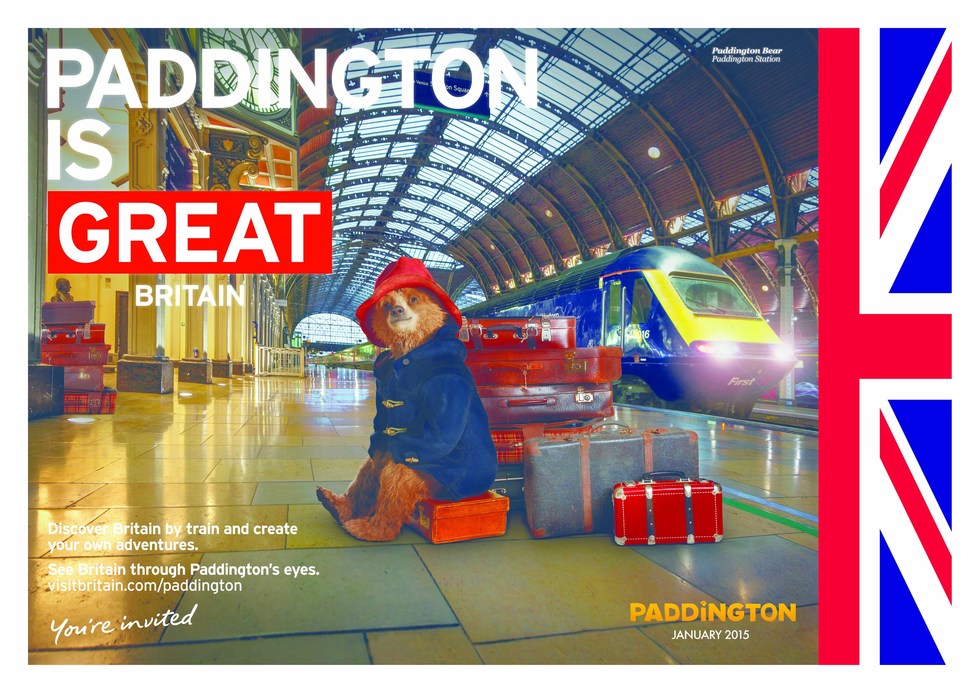 Courtesy, Visit Britain
London
Although interest in Paddington Bear is enjoying a renaissance, Paddington Bear the movie bears the distinction of being the first film to bear destination marketing as product placement. The government-based GREAT Britain Campaign is actually shown in the film on wrapped buses and other signage. Naturally, Visit Britain and hotels all across the country are creating Paddington trails for "set-jetters" to follow. These trails include day-trips out of London's famed Paddington Station in central London, the Peruvian stuffed bear's original dropping-off point.  London's Draycott Hotel and others are also offering "Paddington Packages" for families and adult travelers who want a cuddly bear as a traveling companion. 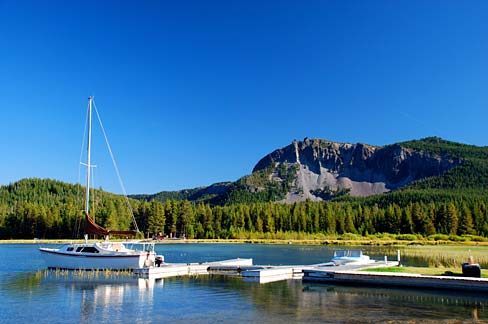 Photo by Gary English for Oregon State Archives
The Pacific Crest Trail
Reese Witherspoon's revealing star turn as traveler Cheryl Strayed, who took on the Pacific Crest trail in a gut-wrenching pilgrimage after her mothers' death, forms the molten core of the movie version of the memoir Wild.

Strayed did the 1,100-mile trek from California to Oregon/Washington, but the filmmakers did most of their location work in and around Portland and wild areas nearby. Some scenic spots such as Paulina Lake subbed in for others described in the book. The 14-cabin Paulina Lake Lodge in Deshutes National Forest was used to represent California's Kennedy Meadows. If you want to soak up some of Wild's heart-stopping scenery but you worry that a major trek along the Pacific Crest Trail is too ambitious, do what the filmmakers did: Set up headquarters in a cozy cabin and do Wild-inspired day hikes. It's much easier on the feet. 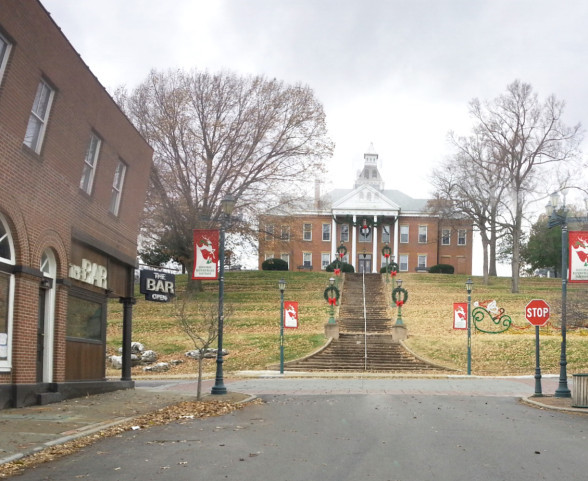 The Bar
Cape Girardeau, Missouri
At first glance, Gone Girl doesn't seem the most likely film to inspire travelers. Journalists have generally agreed not to spoil the plot, but people who have seen the film and read the book understand why.

But Gone Girl was a smash, and Americans love to re-enact popular movies—in this case, they've gone as far as to build attractions. Gone Girl's protagonist couple, played by Ben Affleck and Rosamund Pike, live in a small town in Missouri, by the banks of the Mississippi. The town and landscape are intertwined into the plot, giving filmgoers a look into the darker side of the all-American town. The town that David Fincher chose to play North Carthage was Cape Girardeau, Missouri (above).

The residents of Cape Girardeau were thrilled—they've created their own driving tour of the town, including places such as The Bar (owned by Ben Affleck's character in the film). In an instance of real life following fantasy, once Hollywood finished using a vacant building a setting for its fake The Bar, townspeople opened a real one in the same place—and now tourists visit it. 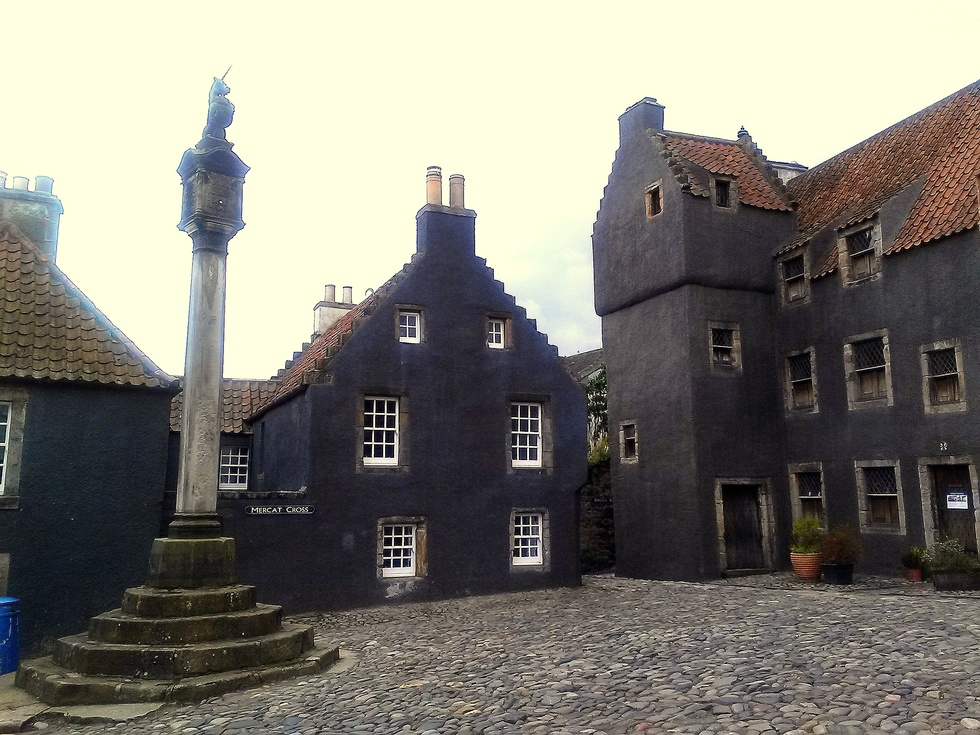 Photo by Gretchen Kelly
Scotland
Starz TV series Outlander made a serious bid to snatch the set-jetting TV crown from HBO's Game of Thrones. Filmed largely in vast, windy, picturesque places in the real Scottish Highlands (such as Culross, above), the series beckons fans, many of them female, to travel to Scotland in the trail of Jaime and Claire.

VisitScotland's Outlander Trail helps travelers plot their own journey into the magic realms seen on screens. Tour companies such as Black Kilt Tours offer day tours to Outlander locations. Black Kilt's owner Ross Buchanan has been on site for some of the filming. He'll not only wear a kilt for your tour, he'll tell first-hand behind-the-scenes tales in his charming brogue.
advertisement 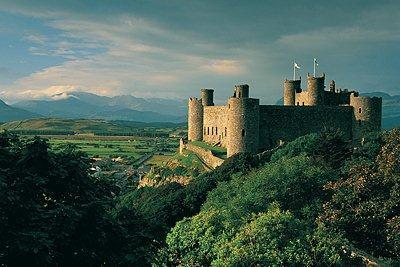 Courtesy, Visit Wales
Wales
Game of Thrones has been filmed on location in Northern Ireland, Iceland, and Malta, among other locations. The series makers have said they would "go all over the world" looking for filming locations to represent the mythical world of Westeros. We have one for them: Wales.

Wales, thought to be the home of King Arthur, is perfect for the Game of Thrones fantasist. It is one of the only countries in the world whose very flag is emblazoned with a red dragon—note that, Daenerys Targaryen! It's also the country with more castles per capita than practially any other in Europe. From Harlech Castle in North Wales (pictured) to Cardiff Castle in South Wales (host to President Obama at the 2014 Nato Summit), Game of Thrones fans can plan a castle-hopping trip through Wales. Fans of the series will also revel in the medieval history of this proud country. From Bard contests to harping concerts, this ancient and hospitable country is the perfect match for travelers in love with George R.R. Martin's vividly drawn characters and the HBO series that brought them to life. 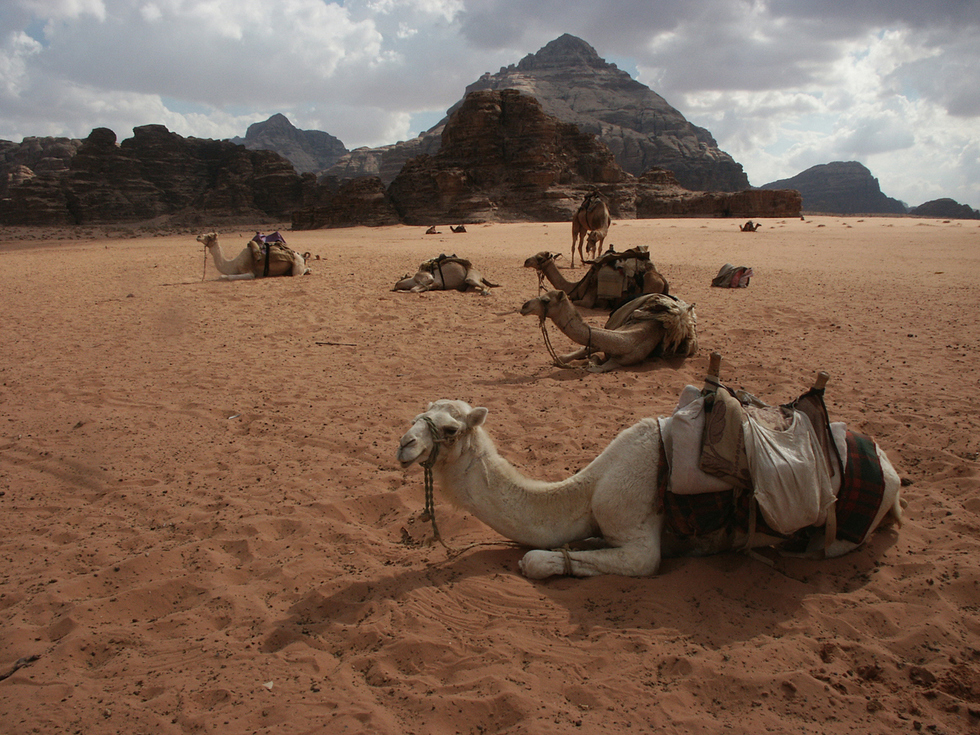 Jordan Tourism Board
Jordan
Ridley Scott loves the desert. The director's films Gladiator, Prometheus, and Kingdom of Heaven lean heavily on locations in Jordan and Morocco to evoke epic landscapes and sweeping sagas. His 2014 effort Exodus: Gods and Kings, starring Christian Bale as Moses, may have struck out at the box office but its exotic locale was fit within Scott's visual universe. For Exodus' desert scenes, Scott used real-life locations around Alameda, Spain (he filmed in the same places seen in Lawrence of Arabia) but the film's designers also mixed in footage from Jordan to give the film its authenic Biblical atmospehre.

Jordan's Wadi Rumm desert (pictured) near Petra, has starred in many films from Scott's Prometheus to Michael Bay's Transformers: Revenge of the Fallen. An Exodus trip to Jordan includes these vast backdrops but it also can include sites closely connected with Moses himself. The panoramic view from Jordan's Mount Nebo offers a view of the Promised Land the Bible says was granted to Moses himself.
advertisement 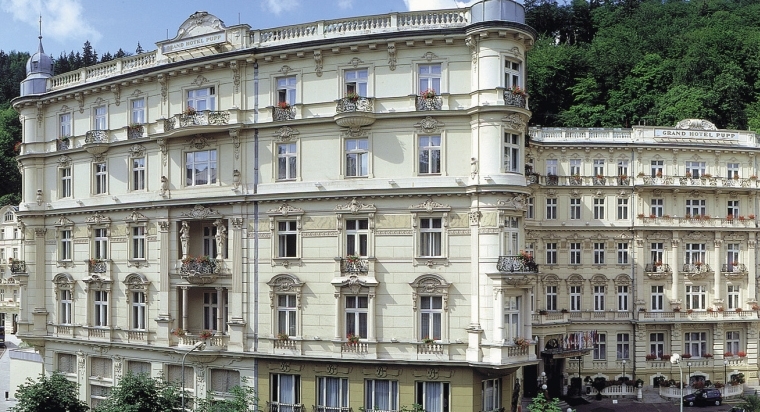 Grand Hotel Pupp
The Grand Hotel Pupp, Czech Republic
Wes Anderson is a traveler's dream director. From 2007's The Darjeeling Limited to 2014's The Grand Budapest Hotel, Anderson's movies are deeply evocative of place. They're movies whose "seeker" characters make you want to make similar pilgrimages. Grand Budapest's designer Adam Stockhausen chose The Grand Hotel Pupp in the Czech Republic as one of his main models for the hotel of the title. While the real life Pupp (also the backdrop for Queen Latifah's Last Holiday and Daniel Craig's Casino Royale) is Belle Epoch on the outside, the rooms, spa, pool, and restaurants within are all sleek and modern. So on a visit, you get the movie's vintage exteriors along with with Frette sheets and modern plumbing. 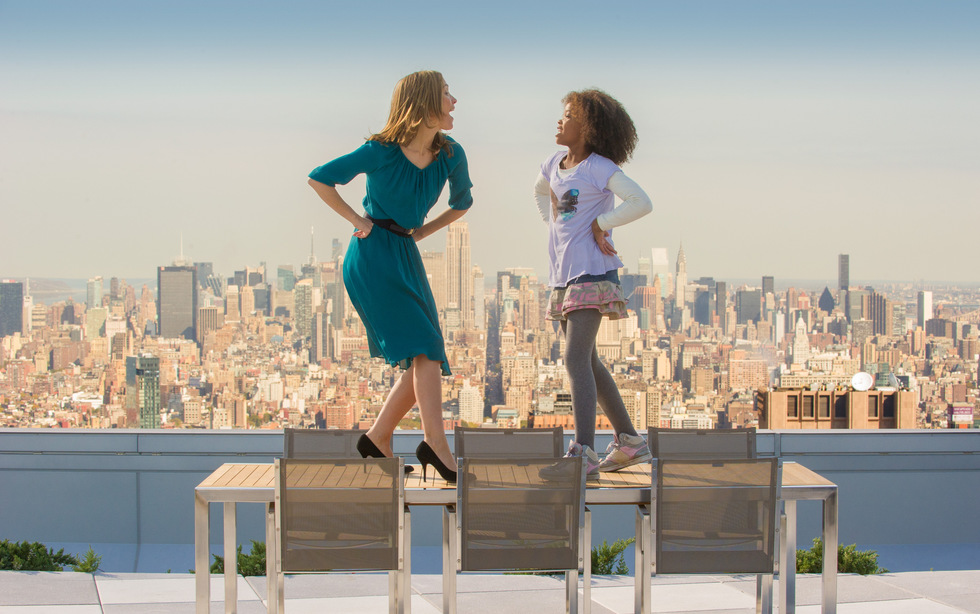 Courtesy, Sony Pictures Entertainment
New York City
Annie wasn't the critics' favorite movie of the year, but director Will Gluck's 2014 re-do of the beloved 1977 Broadway musical certainly gives big love to the Big Apple. Filmed almost entirely on location in New York City (Harlem and Tribeca get lots of screen time), Annie features a bravura performance by young Quvenzhané Wallis (Beasts of the Southern Wild) as well as high-wattage energy from Jaime Foxx as Will Stacks, an update on Daddy Warbucks. OnLocation Tours offers a 3/12 hour bus tour that takes Annie-philes to sites seen in both the new Annie and the original John Huston 1983 film version, including a pass by of Radio City Music Hall, a site that might have been familiar to the original Depression-era comic strip orphan upon which the whole franchise was based
advertisement 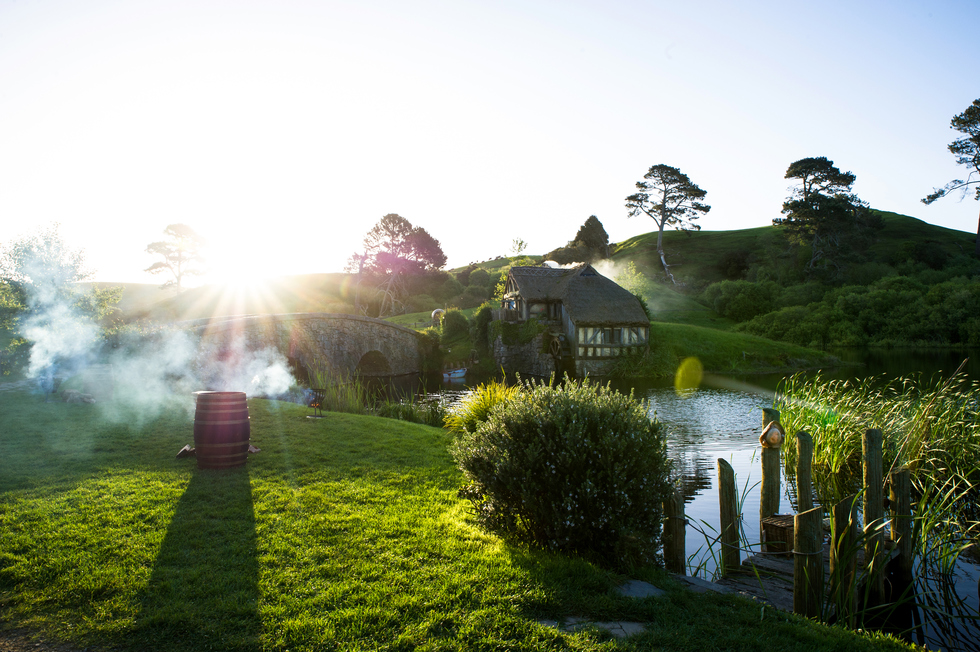 Courtesy, Tourism New Zealand
New Zealand
The Lord of the Rings is by now the granddaddy of "set-jetting" films, and just when its orc-loving tourist base seems exhausted, a new batch of movies renews interest. Peter Jackson's fantasy film trilogy and his three subsequent Hobbit films are credited with luring a full six percent of all travelers to New Zealand. Although the sets from LOTR througout New Zealand are largely gone, fans make pilgrimage at two sites: The Weta Workshpo Tour in Miramar, Wellington, and Hobbiton, two and a half hours outside of Auckland—both on the North Island.

The Weta tour takes visitors inside Jackson's famed Weta Workshop where the Hobbits (and Golem and all those armies) were animated. There's also a trip to a Hobbit-shoppers' paradise, Weta Cave, where original creature molds are on view along with every possible permutation of LOTR merchandise you could think of. Hobbiton Tours include the two-hour transportation from Matamata to the rural area where Hobbiton was born.

Hobbiton (above), where the movies' hobbits dwell, is a permanent exhibition. Although the films are at an end, the Hobbits' story in New Zealand will continue as long as there are travelers inspired to make their own epic journey to Middle Earth.