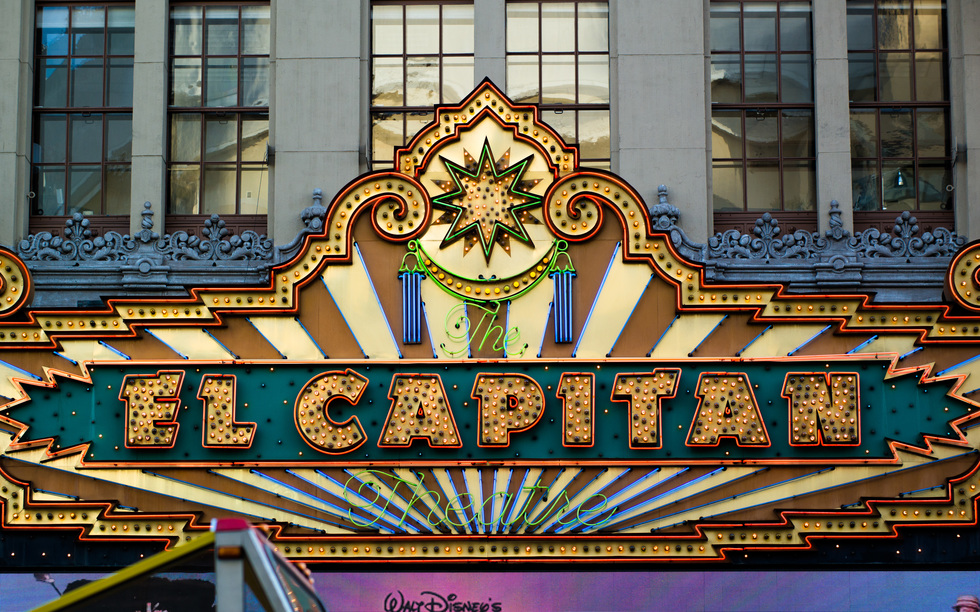 Though the first moving pictures were projected onto linen sheets hung on the walls of ordinary rooms, exhibitors soon realized that people came to the movies to escape reality—and they set upon extending the fantasy from the films to the theaters themselves. Many borrowed themes from world architecture, particularly exotic Chinese, Aztec, and Egyptian motifs, but the most popular look was Art Deco, with its streamlined chrome and sinuous curves. But with the rise of the multiplex, these grand palaces were boarded up, used for other purposes, or demolished. Here are 9 that have escaped the wrecking ball. 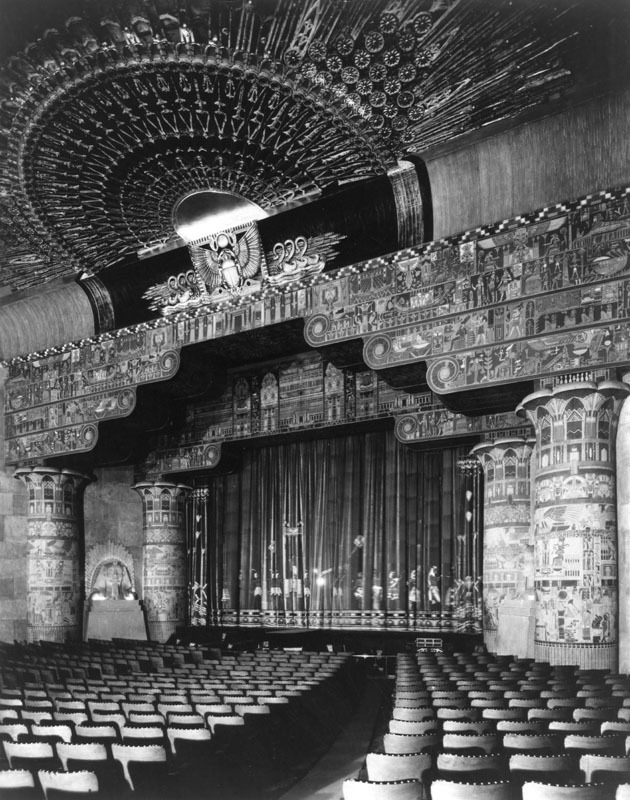 This grand theater opened in 1922, the same year King Tut’s tomb was found, and explorations in Egypt inspired its motif—a columned forecourt, hieroglyphics, murals, and a tiled fountain. Built by Sid Grauman as a palace fit for premieres, it continued to host premieres until 1968. Closed in 1992 and damaged in the 1994 Northridge earthquake, it was restored by the American Cinematheque in the late 1990s and now shows classic and contemporary films. Tours are available. www.americancinematheque.com. 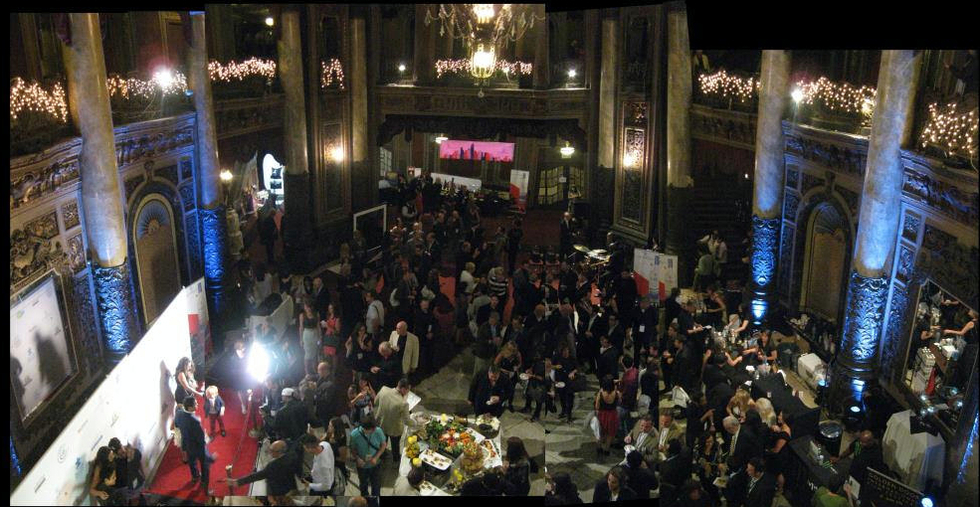 This astonishing baroque theater opened its doors at 54 Journal Sq. in 1929, with a grand lobby dominated by a chandelier. Its large clock tower, featuring a copper statue of St. George and the dragon, is a local landmark. Slated for demolition in 1987, it was saved by a grass-roots campaign and today shows both vintage and contemporary films and hosts live performances. tel. 201/798-6055. www.loewsjersey.org. 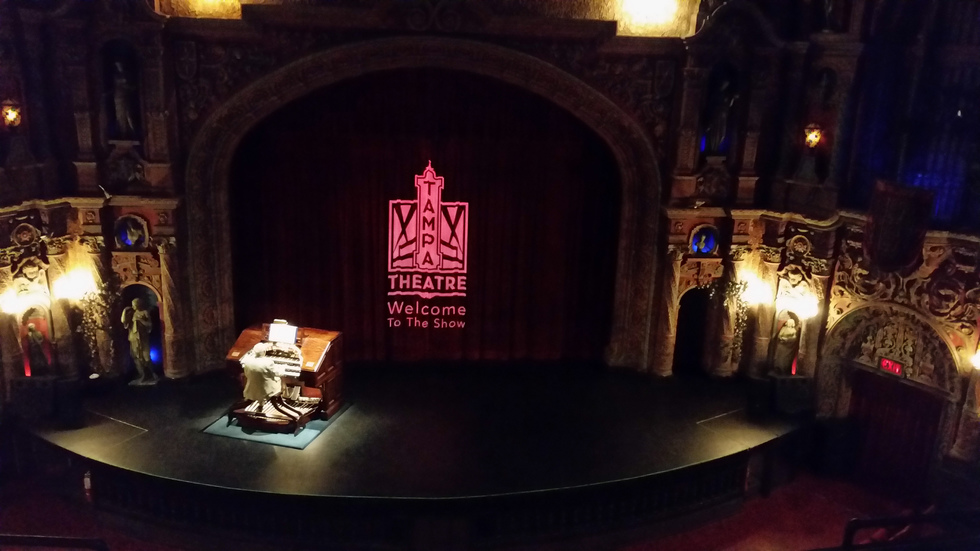 The Tampa Theatre opened in 1926 in downtown Tampa as a breathtaking example of an “atmospheric theater,” simulating an immense Mediterranean courtyard with statues, flowers, and gargoyles under a “sky” of twinkling stars and floating clouds. Faced with demolition in 1973, it was rescued through community efforts and reopened in 1978. 711 N. Franklin St. tel. 813/274-8981. www.tampatheatre.org. 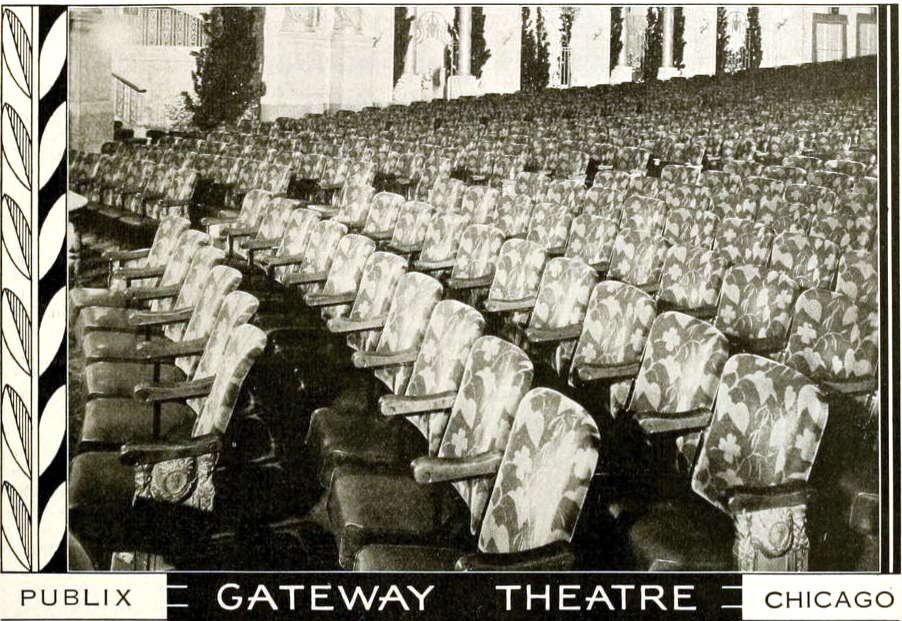 When it opened in 1930, the Gateway featured the latest rage: “atmospheric-style” decor, with a dark-blue star-spangled ceiling like a sky over the 2,100-seat auditorium, and classical statuary and vines on the side walls. Praised for its acoustics, the Gateway remained an active single-screen cinema through the 1970s. In 1985, a Polish-American community group, the Copernicus Foundation, took over and restored the theater, using it for community gatherings and special events. tel. 773/777-8898. https://copernicuscenter.org/ 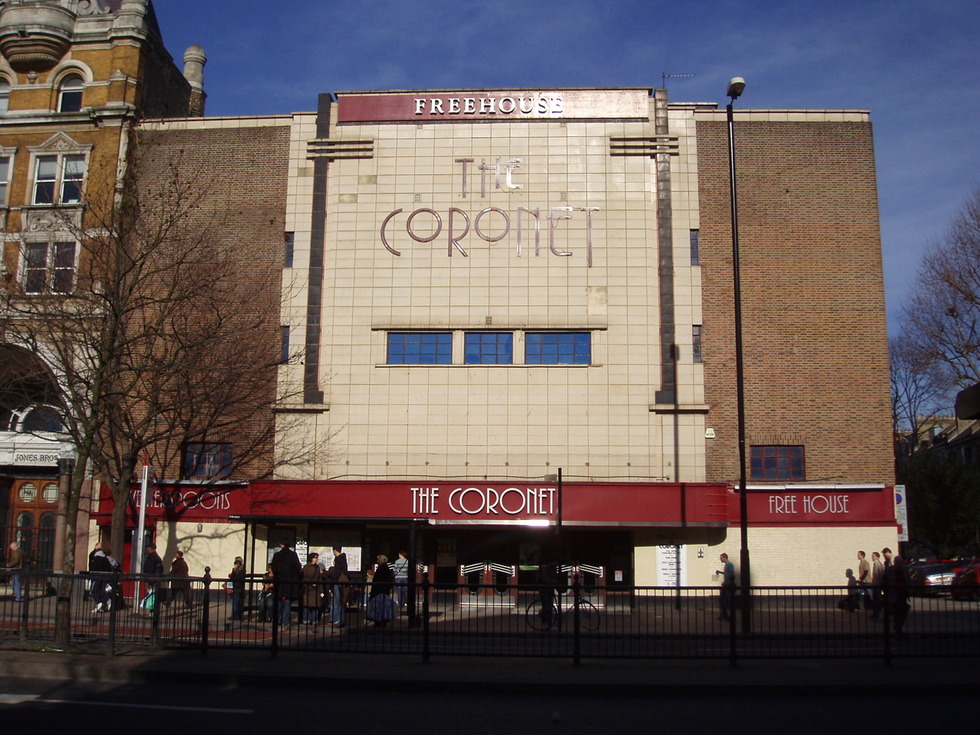 Prime among new cinemas converted from existing theaters was the 1898 Coronet Theatre in Notting Hill Gardens, an imposing Palladian theater where, legend has it, Sir John Gielgud saw his first Shakespeare play. Converted to a movie house in 1923, this landmark cinema has shown movies ever since. https://www.thecoronettheatre.com/ 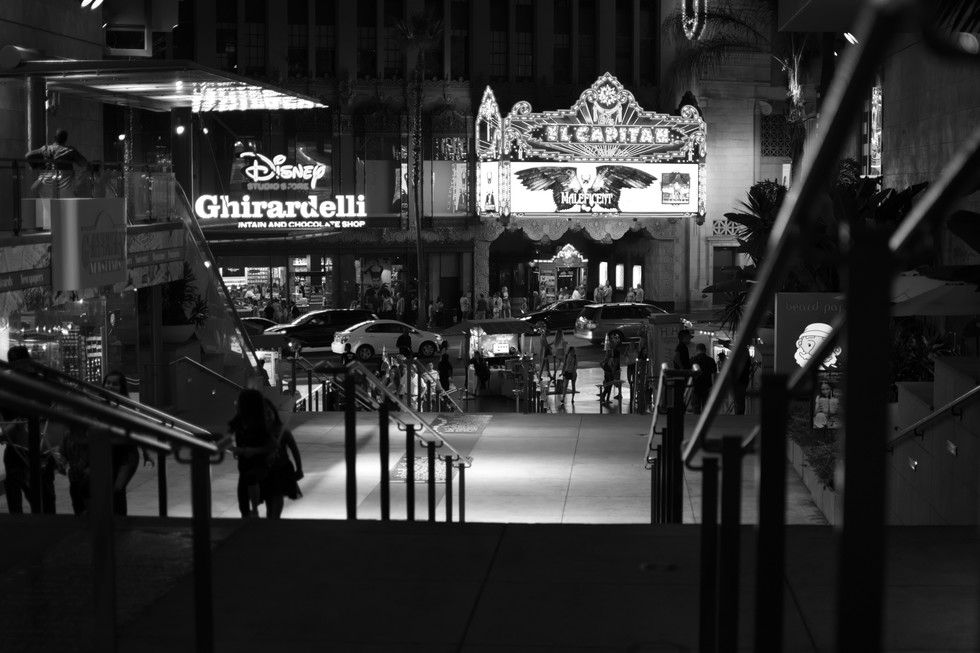 When the El Capitan Theater opened in 1926, it featured a Spanish colonial exterior and an elaborate East Indian interior. Designed for live plays, the El Capitan gradually became a movie house; in 1941, the world premiere of Citizen Kane was held here. The declining El Capitan was bought in 1989 by the Walt Disney Company, which restored much of its original decor. tel. 323/467-7674. https://elcapitantheatre.com. 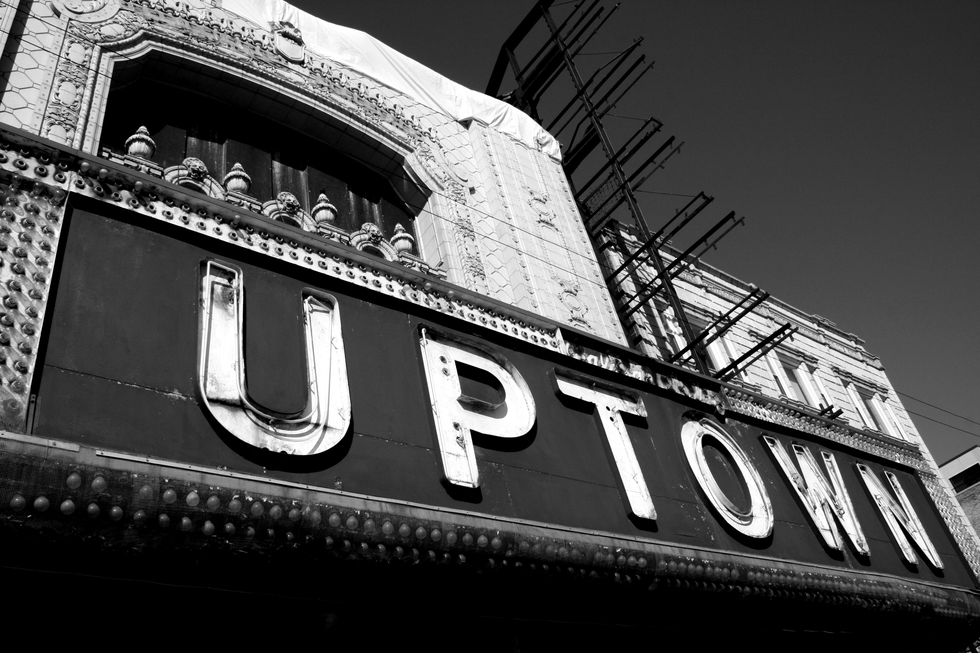 With nearly 4,500 seats, the Uptown Theater was the second-largest movie palace in the United States, after Radio City Music Hall. The design is Spanish Revival; a deliriously ornate five-story entrance lobby rests behind an eight-story facade. Initially built in 1921 for live performances (it had its own orchestra), by the 1940s it was mostly a movie house. A designated Chicago landmark, it’s been closed since 1981. In 2011, Alderman Harry Osterman pledged to work with another alderman, the owner of the building, and Friends of the Uptown to renovate the grand old building. www.uptowntheatre.com. 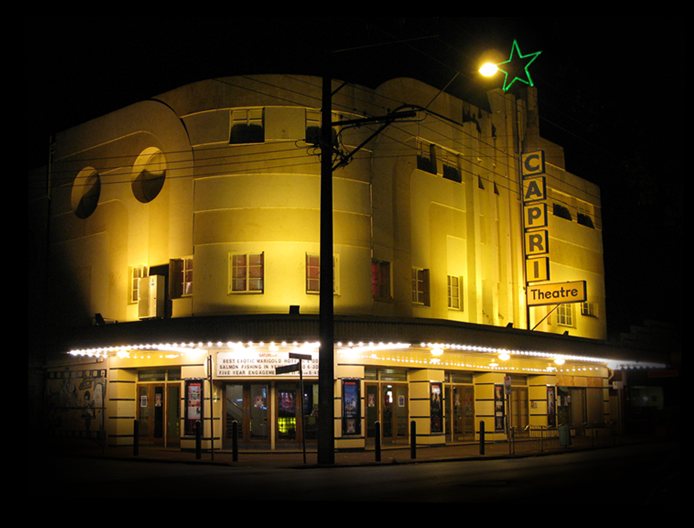 A sleek Art Deco palace built in this Adelaide suburb in 1941, the Capri’s most outstanding feature is its classic Wurlitzer theater organ. The Capri, in fact, has the largest theater organ in the Southern Hemisphere, which is played before film screenings 3 nights a week. 141 Goodwood Rd. tel. 61/8/8272 1177. www.capri.org.au. 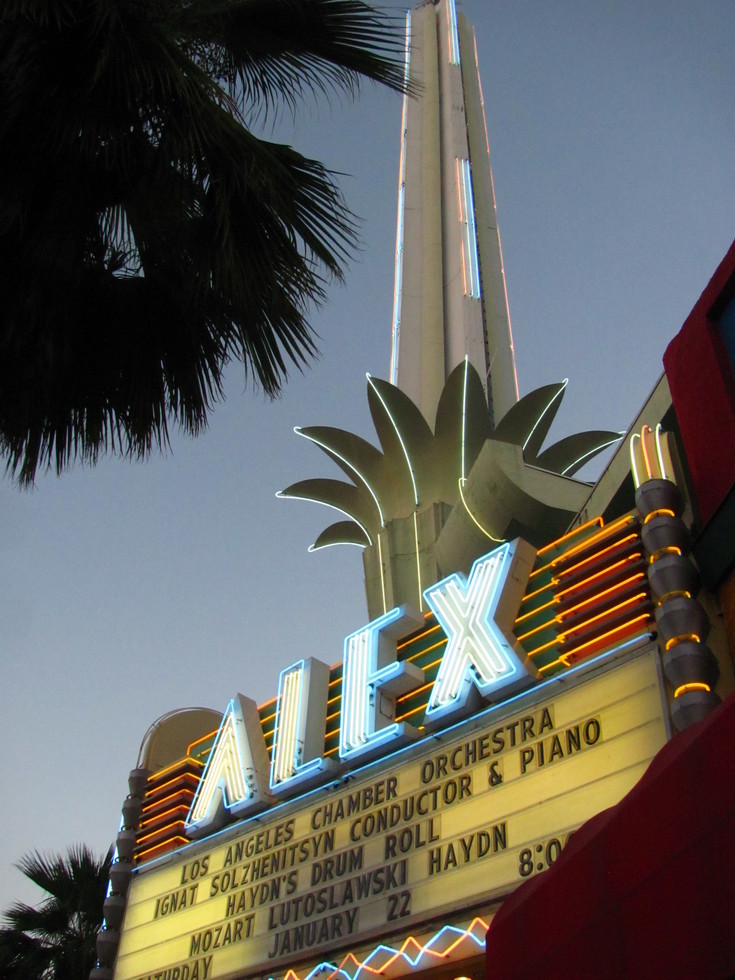 Built in 1925, The Alex Theatre began as a vaudeville theater and first-run movie house, designed with Greek and Egyptian motifs. The atmospheric decor featured a stage set simulating an ancient garden. In 1940, a 100-foot-tall (30m) Art Deco neon tower topped by a spiked starburst was added. Renovations began in 1992, and it is now a performing arts and entertainment center. tel. 818/243-7700. www.alextheatre.org.