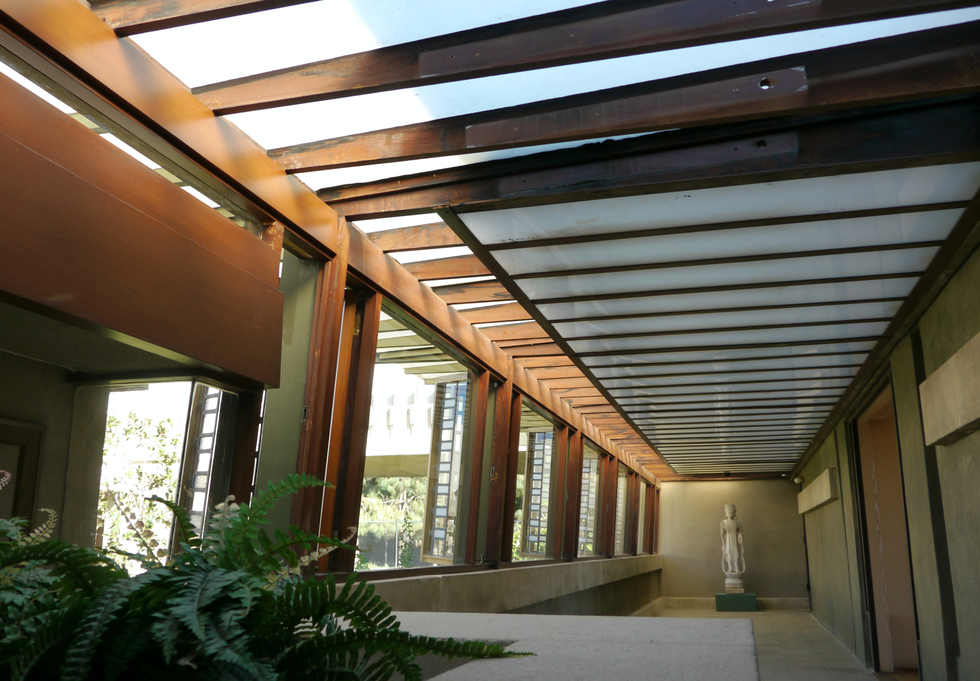 By Jason Cochran
How'd you like to live here? It's a passageway inside Hollyhock House, the first home built by Frank Lloyd Wright in Los Angeles. He didn't just design the ultimate showplace—he even picked out that Buddha sculpture, probably on one of his trips to Japan to create Tokyo's famous Imperial Hotel.

It didn't always look this good. It original owner, who commissioned it, only kept it a few years before giving it to the local government, which sent Hollyhock House into a decades-long odyssey of benign neglect, nonexistent maintenance budgets, and abusive tenants, who absconded with many of the original fixtures. But in 2019, shortly after a six-year, $4.4 million project, the architectural masterpiece was named a UNESCO World Heritage site—the first one in Los Angeles. 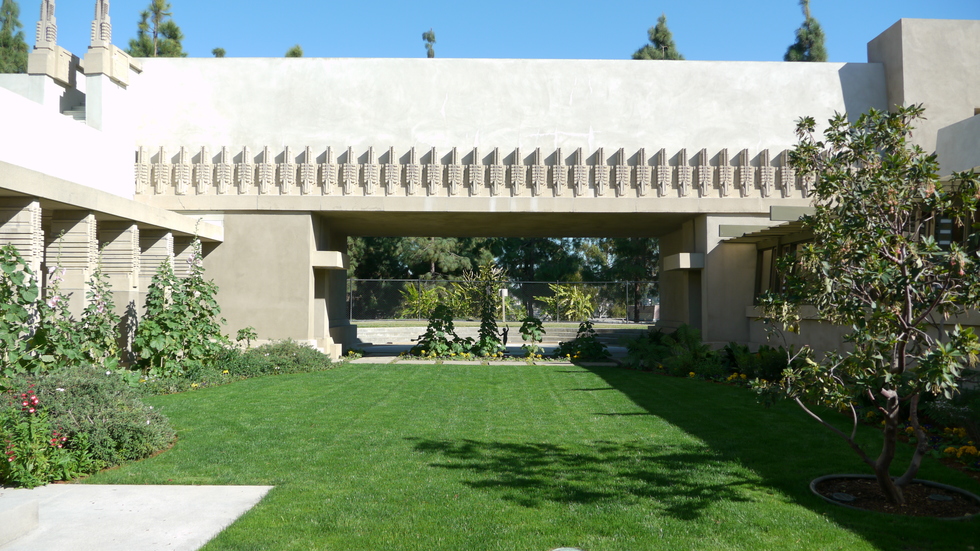 Jason Cochran
Courtyard
Today, the historic structure is part of the Barnsdall Art Park Complex, but when it was built, it was something that no one in Los Angeles—or in any other of American society circles—had seen: a home that looks virtually Mayan, a stone-like temple by an architect who, before its opening, had been famous for Prairie-style homes. Some architectural historians have suggested that the way the Hollyhock "flows" was a precursor to the first ranch-style homes in the United States. That most common of U.S. home styles appears to have begun with quite the twist. 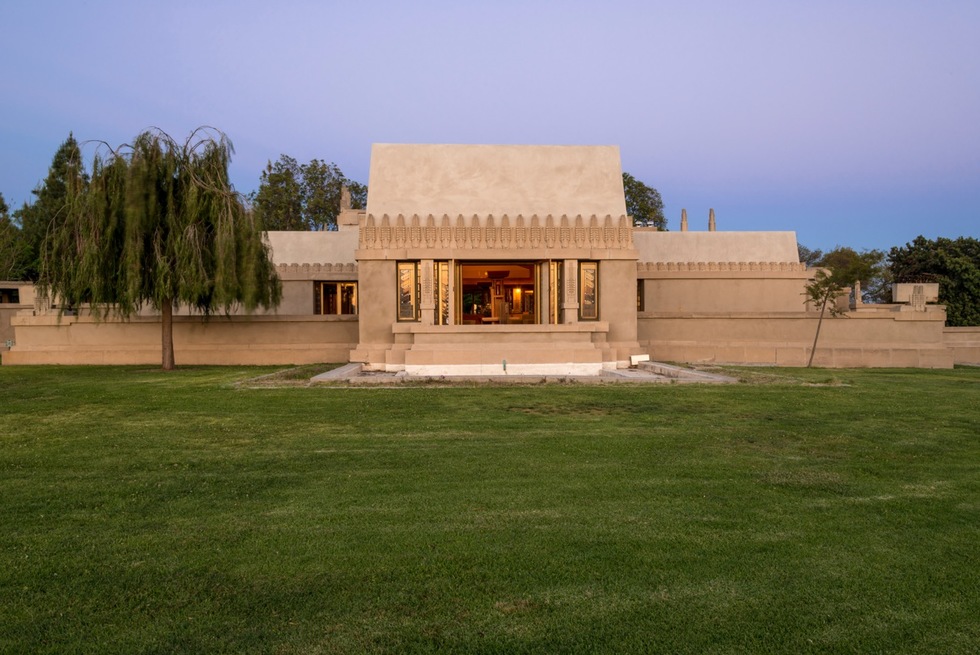 Joshua White / JWPictures.com
Hollyhock House from its lawn
Originally, the home was supposed to be made of poured concrete, but that turned out to be cost prohibitive, even for the heiress to the oil fortune who commissioned it. Instead, Wright used hollow clay tile. It looked right, but wasn't very good at keeping water out. The resulting leaks, which accumulated over decades, have required much stabilization.

At the same time, restorers had to rectify later changes. They removed recessed lighting and replaced the ugly sliding glass doors that had been installed in place of Wright's original wooden accordian-style doors (which had been intended to allow the spaces within the home to flow into the warm Los Angeles sunshine). 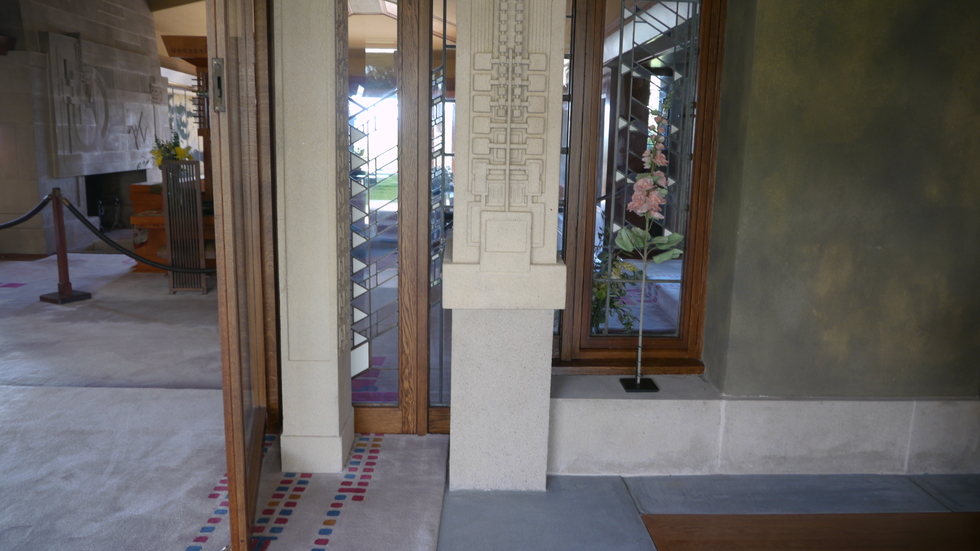 Jason Cochran
Hollyhock emblem, Hollyhock House
Aline Barnsdall, who commissioned the home as a showpiece, was an unconventional woman for her era. She named her child Sugar Top and decided to raise her without a husband, she supported early 20th-century labor anarchists, and she collected art. Perhaps less unconventinally, her favorite flower was the hollyhock, and Wright incorporated his stylized version of the blossom throughout the design, including on columns and on rugs, which were re-created for the restoration using original photographs; the originals went missing decades ago. 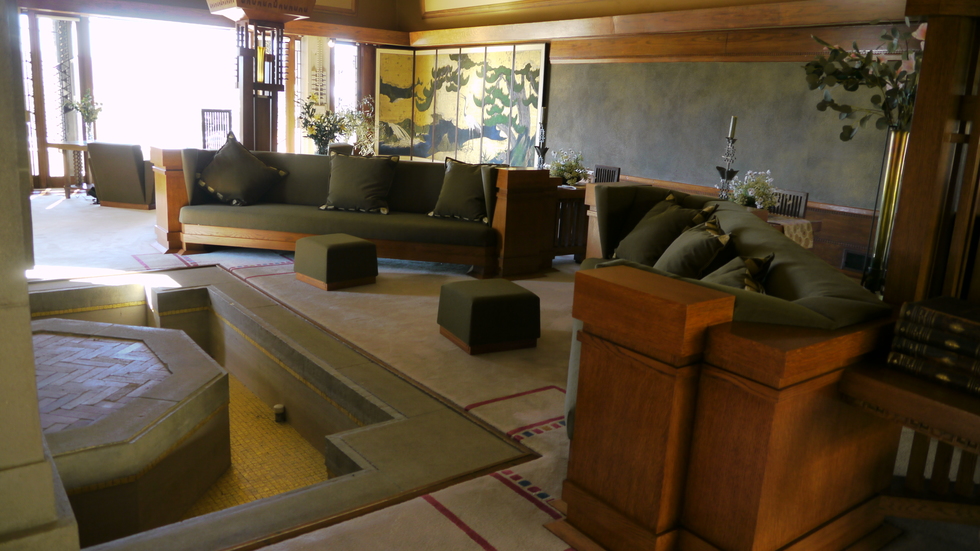 Jason Cochran
Living room, Hollyhock House
The main living area is the showplace, with wide western views, a custom suite of furniture and towering floor lamps (most designed by Wright, now largely re-created). A geometrically carved fireplace was originally fronted by a shallow pool. This element gave the room representations of the four elements: fire, earth (the stonework), air, and water. 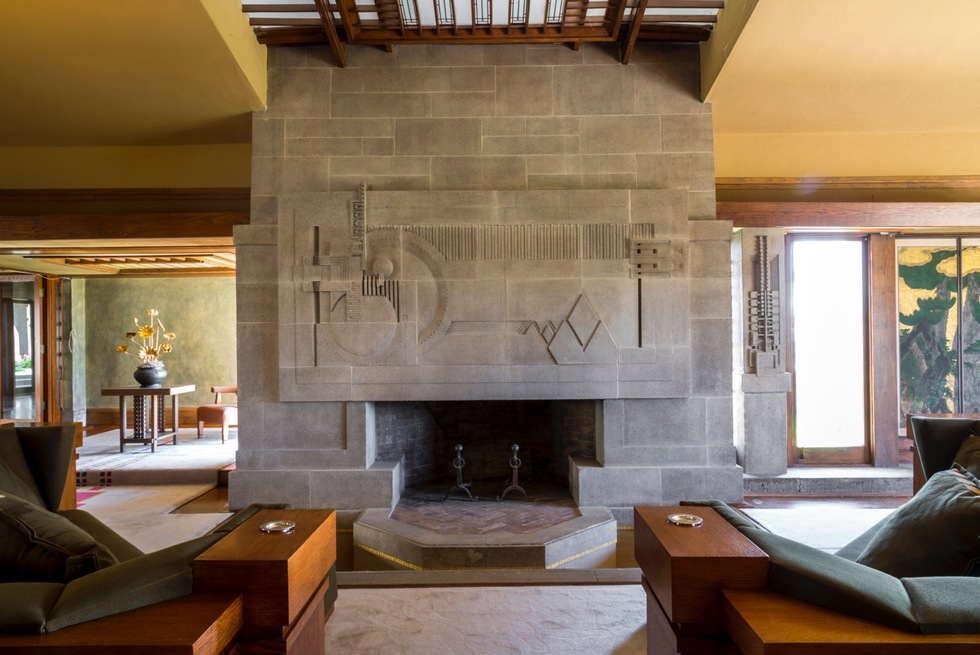 Joshua White / JWPictures.com
Skylight, Hollyhock House
Above the fireplace, Wright installed a skylight. Such flourishes are what caused the home's construction budget to bloat from $50,000 to $150,000 and the schedule to stretch to four years. He and his patron, Barnsdall, fought over the work. She never thought the final product was what she envisioned and so she decided not to live there permanently and to cancel plans for additional buildings on the plot, instead donating it to the California Arts Club in the late 1920s. 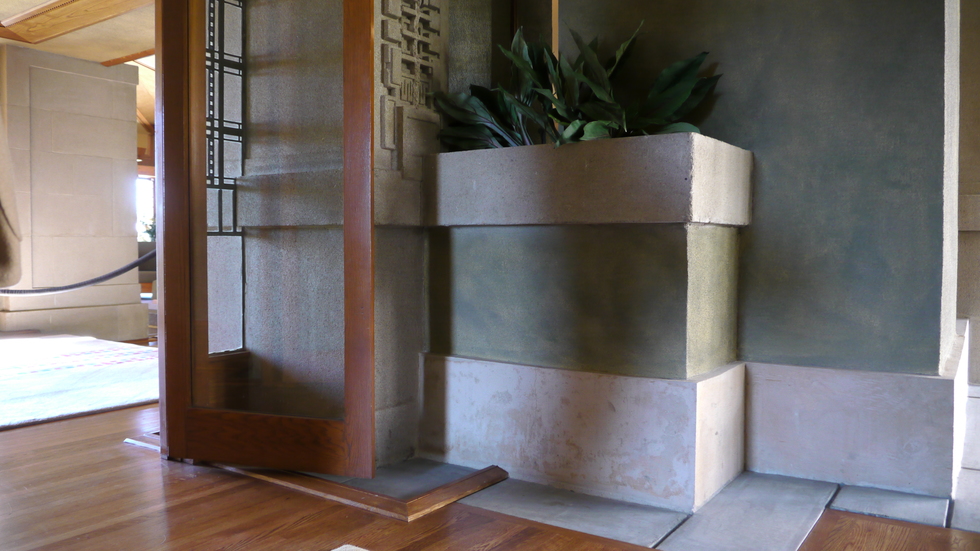 Jason Cochran
Planter, Hollyhock House
In returning the home to its 1920s grandeur, restorers faced considerable difficulty. The building was in such disrepair—both because of fundamental flaws with Wright's design and because of naked neglect—that no one knew exactly how walls looked. One day, though, they realized that the original stucco style could still be found on a hidden patch deep inside this built-in planter in the sweeping foyer. This swatch of paint was the Rosetta Stone that decoded the rest of the design scheme. 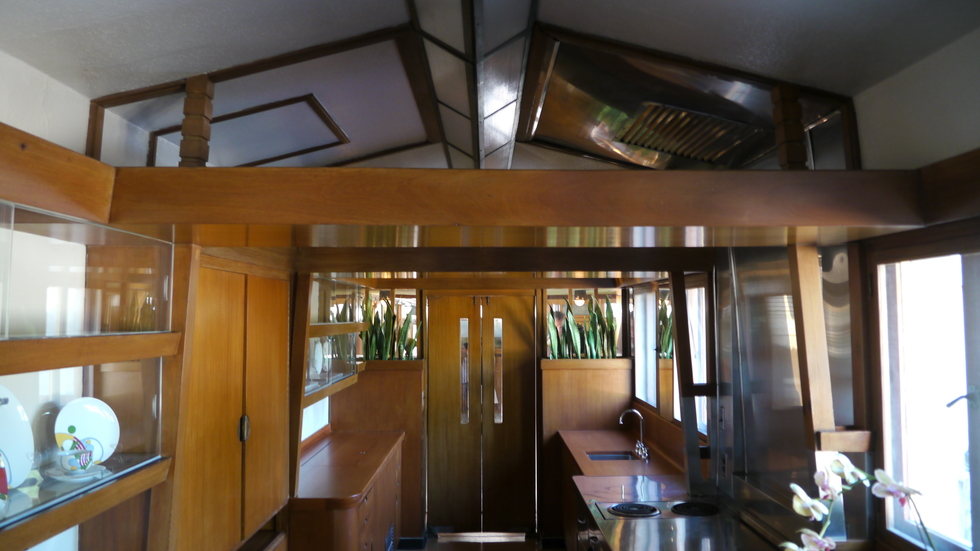 Jason Cochran
Kitchen, Hollyhock House
Could you cook a meal in this galley kitchen? Aline Barnsdall surely didn't. This is mostly the work of Wright's son, Lloyd, who completely rebuilt the kitchen in 1946, throwing down formica counters, among other sins. Restorers brought back its mahogany countertops. 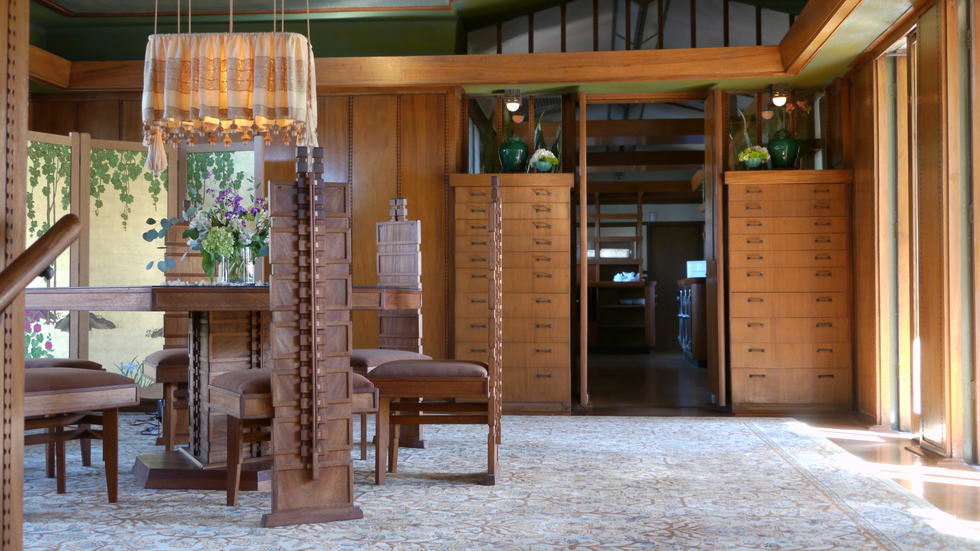 Jason Cochran
Dining room, Hollyhock House
The dining room set, however, is original Wright, not a reproduction. Take note of the clerestory windows: They have been raised by four inches after restorers realized the roof height had been altered in years past. Now there's light flooding into this room again, just the way Wright had intended. 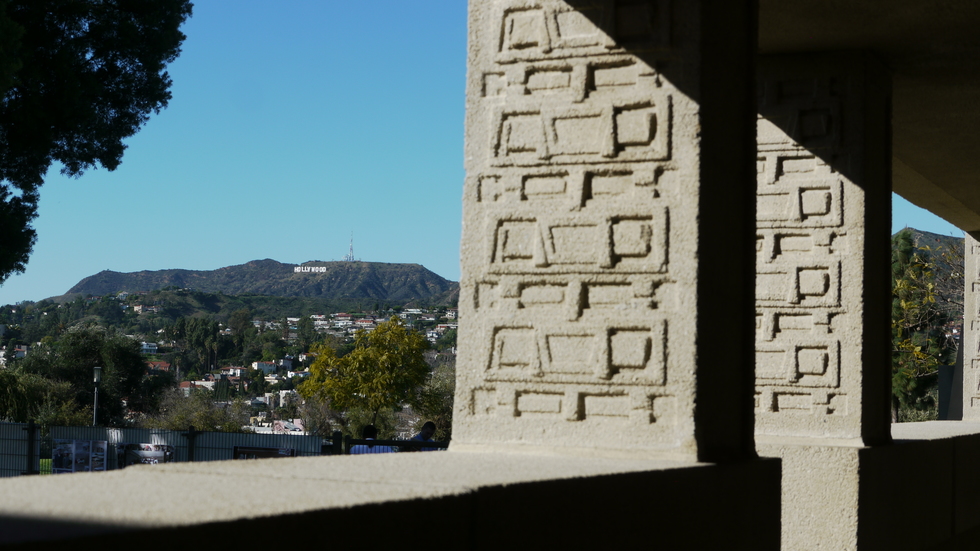 Jason Cochran
Entryway, Hollyhock House
Today, Hollyhock House again wows visitors. It commands a 13-acre plot on the top of Olive Hill in Hollywood, California, along with an adjoining theatre and arts center, and it has been nominated to be a UNESCO World Heritage Site. Its bedrooms remain off-limits because they haven't been made ADA compliant, and there's still a lot more restoration to be done (including stabilization of the multiple terraces overlooking the Los Angeles Basin), but the home is finally getting the love it was long denied and looks nearly identical to when it was born nine decades ago. Tours are conducted several days each week and can be booked via Barnsdall.org/tours.
Arts and Culture