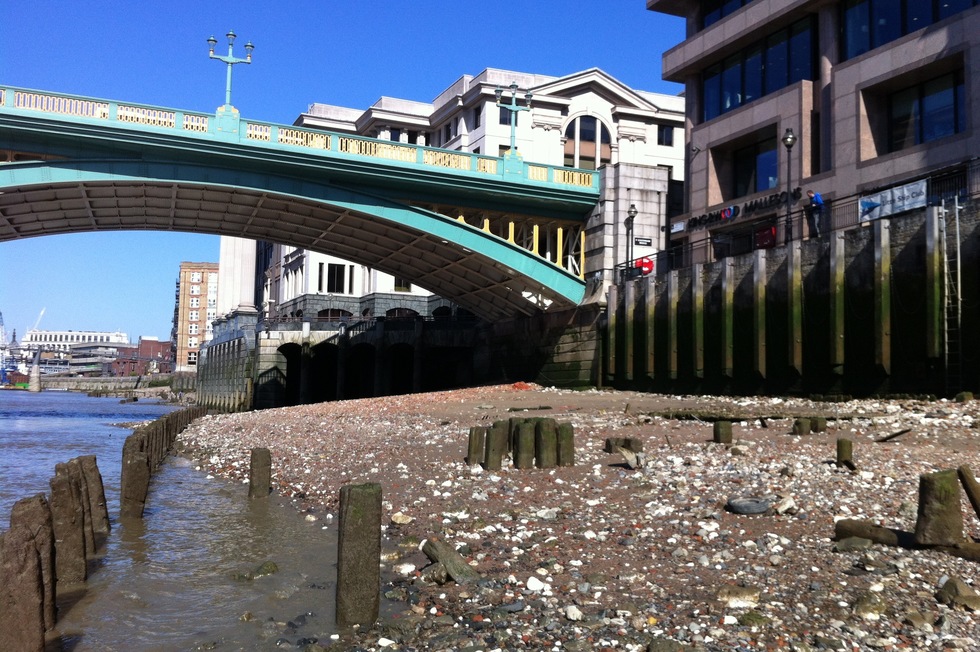 By Jason Cochran
Twice a day, the Thames in London swells with tidal water, rising as much as 23 feet. And as that great daily gush tumbles through the ancient channel, it tosses up centuries of junk. A little over a century ago, pollution wasn't a concept; to our ancestors, the world was inexhaustible and the river was God's gift for flushing away the animal bones and excrement and used-up crockery of their days.

And when that great churn of water departs the city again at low tide, it leaves behind newly exposed detritus that have been lost in time. Believe it or not, it's possible for tourists like you to descend to the beaches of the Thames and pluck out the remnants of centuries past.

It's called mudlarking, and it's probably the most exciting way to discover London that I've ever experienced. Here's how to do it. 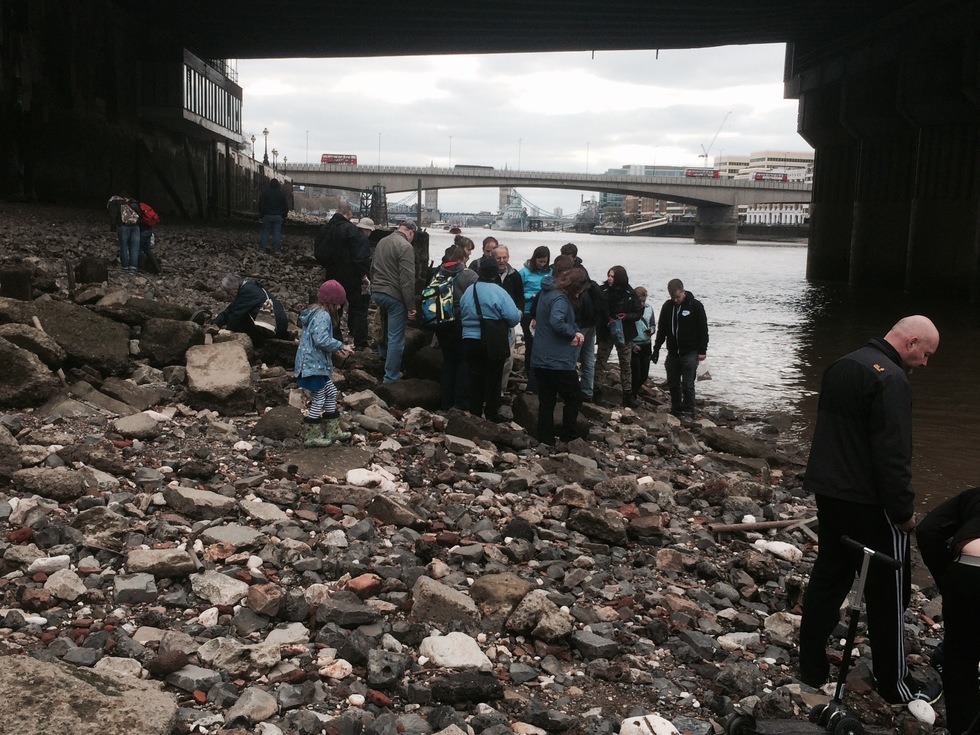 Jason Cochran
How to start
First, you have to think of safety. As I said, the river can rapidly swell by as much as 7-plus meters (23-plus feet), and you could die a highly theatrical but unnecessary death. There's no way a casual tourist can know where to safely dodge a quickly rising tide, so the wisest course is to go with a guide. Besides, you don't have a license—the Port of London Authority wants everyone to carry one. They're easy to get (there's no test and foreigners can have one), but it wants to make sure you know the basic rules and follow them.
In the City, the northern bank of the river is the best. That's partly because the northern side has the most history—the southern side of the Thames wasn't densely settled until society developed the technology to make it less marshy. Here, our guide has us beneath the Cannon Street Station railway bridge, where the long-gone Walbrook River once flowed into the Thames. 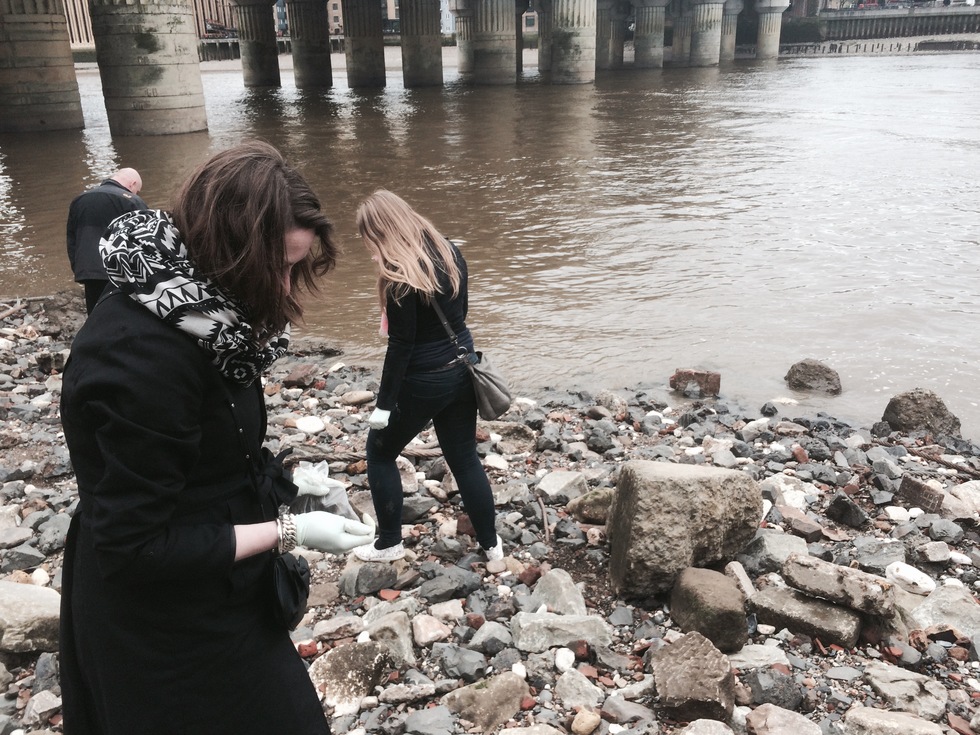 Jason Cochran
Protect against germs
You should also bring sensible, grippy shoes. You won't sink in the mud if you keep to the middle of the City, but you will brush up against muck and you may need to climb a ladder to get back to street level.

Also consider rubber gloves like these novice mudlarkers. The river may not smell like it, but London's Victorian-era sewers sometimes release human effluvia into the flow and you could potentially catch something if you have a small cut or if you accidentally wipe an orifice with a dirty hand. Just think in terms of hygiene and you'll be fine. Lots of people don't wear gloves at all, but it's smarter to do it—you may find the odd hypodermic needle and you may be shocked to learn that broken Georgian glass can slice your flesh as neatly as modern glass.

And wash your finds before letting anyone else handle them. You won't damage them doing it. They've been in this river for centuries. 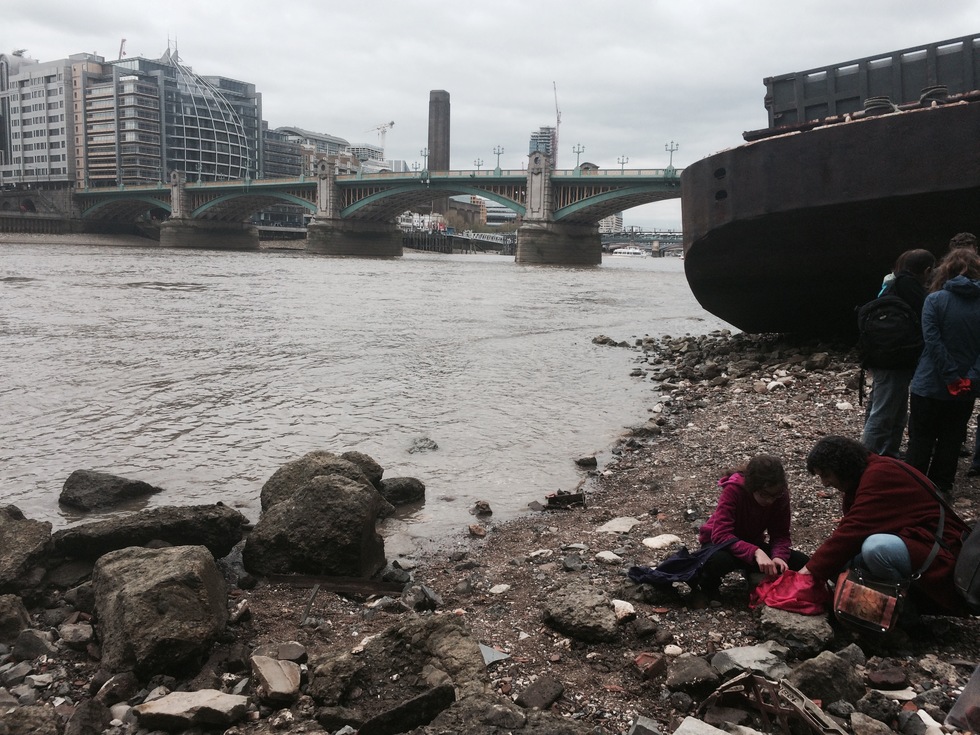 Jason Cochran
Little mudlarkers
Although the river foreshore is risky to the heedless, it's not truly dangerous if you are cautious. That's why it makes a particularly good activity for parents with their carefully monitored children. Kids actually make better mudlarks than grown-ups do: Their eyes are closer to the rubble and more apt to sensing when they've run across something unusual. They'll also learn about two millennia's worth of history through the everyday objects they find. On my first trip out, a nine-year-old girl ran across a perfectly preserved Victorian table fork. Our guide was plainly jealous of her find. 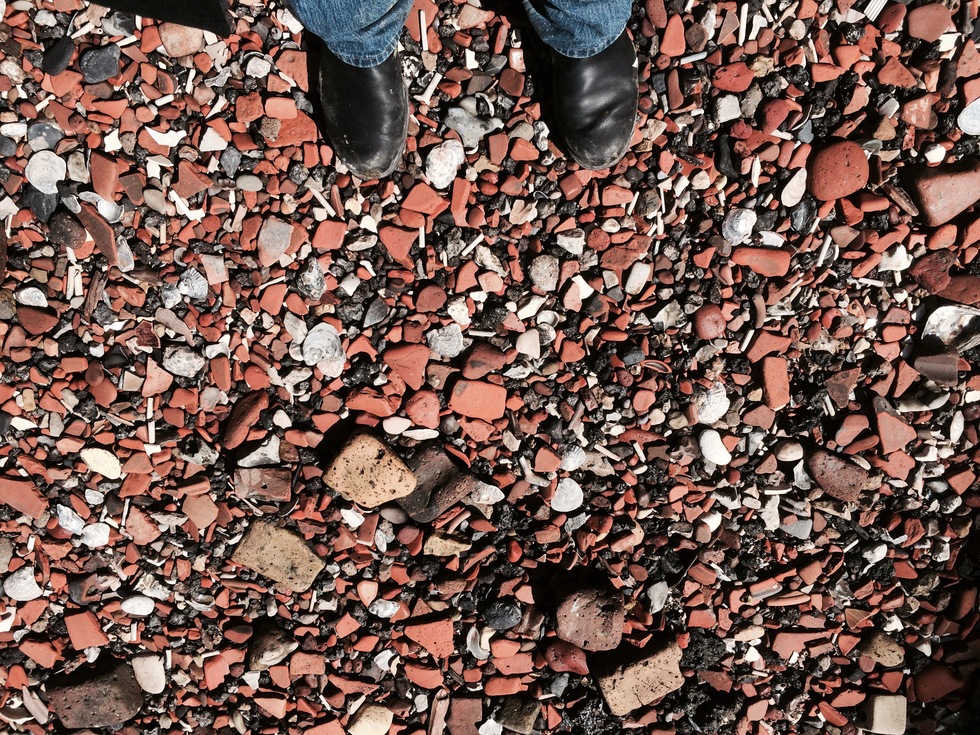 Jason Cochran
"Eyes only"
Rule Number One of mudlarking is: Eyes only. You're not allowed to dig, scrape, or use a metal detector, at least not without a permit (obtained from the Port of London Authority). Even turning over rocks technically requires a permit. But as you can see, "getting your eye in," as locals say, still allows you to find incredible objects.
Consider this image, which was taken by the north end of the Southwark Bridge. The red things aren't rocks. They're roof tiles, many from the medieval period, and some of which were charred by the Great Fire of 1666. The straw-like white cylinders are bits of clay pipes, which you'll find in abundance. You will also find chunks of Tudor beer tankards, ancient bottles, smashed Delftware crockery, keys, cutlery, animal jawbones, the occasional leather shoe—anything that someone would have chucked in the river once upon a time. The Thames has mixed them all up together so you'll find 2,500 years of history in the same field of vision.
This stuff would be junk to a local London mudlarker. But imagine coming home from your English vacation with your very own shard of Roman pottery. 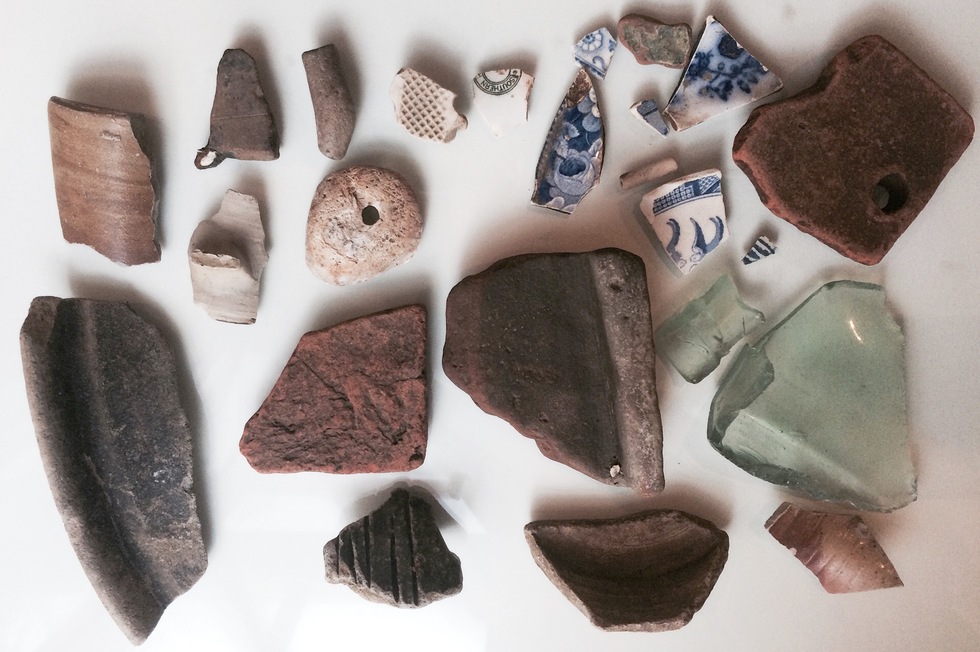 Jason Cochran
Everyday treasures
Astoundingly, you can keep what you find. Here are a few things I found on my first mudlarking trip. They include bits of 19th-century railway china, a Roman roof tile, and a grooved chunk of a medieval jug that once had a strap.
There is no program in place by the City to protect or archive the most mundane finds that wash up every day. And every day, anything that's been exposed will probably be plucked up by the river and washed out to the North Sea, lost forever. So take what you see. You're actually rescuing it, not defiling London. 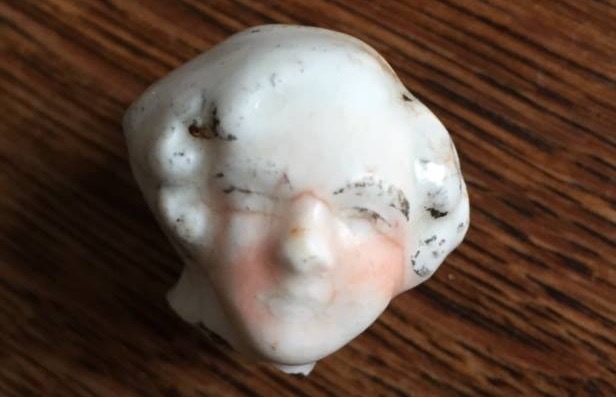 From the London Mudlark Facebook community
Haunting finds
What amateurs find actually contributes to knowledge of our history. That's because if you find anything the city considers of archeological significance, such as gold, silver, collections of coins, or truly remarkable whole potteries, you're supposed to let the experts at the Museum of London (www.museumoflondon.org.uk) know, even if it's only through photographs. (This is another smart reason, besides safety, to go with a guide--you'll know what's truly rare.)

You probably won't find anything this good. You'll find bits of crockery, keys, buttons. But you won't care. It's not about making cash—the stories of what you do find will be thrilling enough for you.
I didn't find this particular item. This is from the London Mudlark Facebook group of avid searchers. But I will find something like this—next time. Because mudlarking is addictive like gambling. Next time, I'll hit the jackpot. 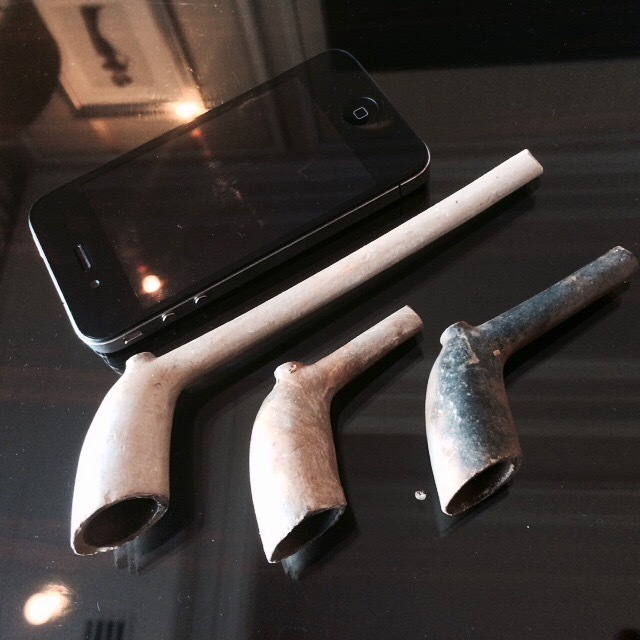 Jason Cochran
Clay pipes
Clay pipes were an integral part of London life starting in the 1500s. People tossed them into the water the way modern people flick cigarette butts. They're absolutely everywhere.


Here are a few I found in the rocks, placed next to an old iPhone 4 for size reference. It makes my head swim to think that my hands were the first to touch these for many centuries after they slept under an ancient river, and that they miraculously reached me unshattered.
With these finds, mudlarking officially became one of my favorite experiences I have ever had in London. It's intoxicating and addictive. For me, it's going to be as regular a stop as the British Museum or the Tate Modern.
Using a mudlarking resources such as Thames Discovery Programme (www.thamesdiscovery.org), you can identify some of the things you find one the foreshore. 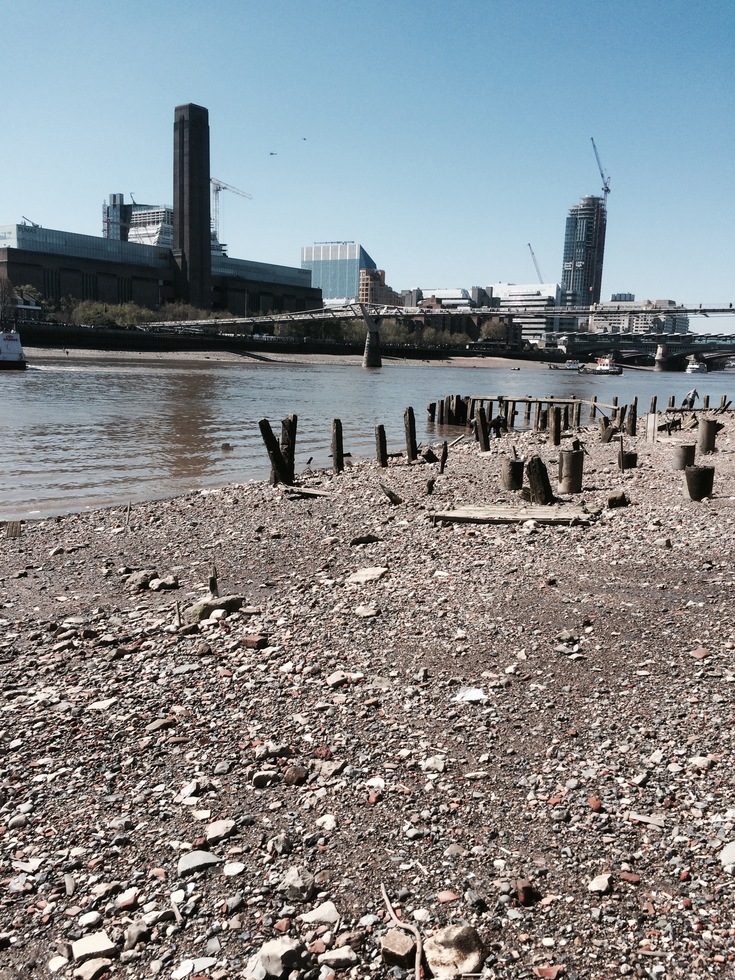 Jason Cochran
London's unique foreshore
Mudlarking is something you can't do in Europe's other major population centers. Most other European cities have over-engineered their rivers' flow, scooped out their history, and channeled their waters into paved canals. Their history is long gone. But not London's. It's one of the only places where you can safely do something like this. History reaches out and discovers you as you walk past. You only have to get close enough to identify it. 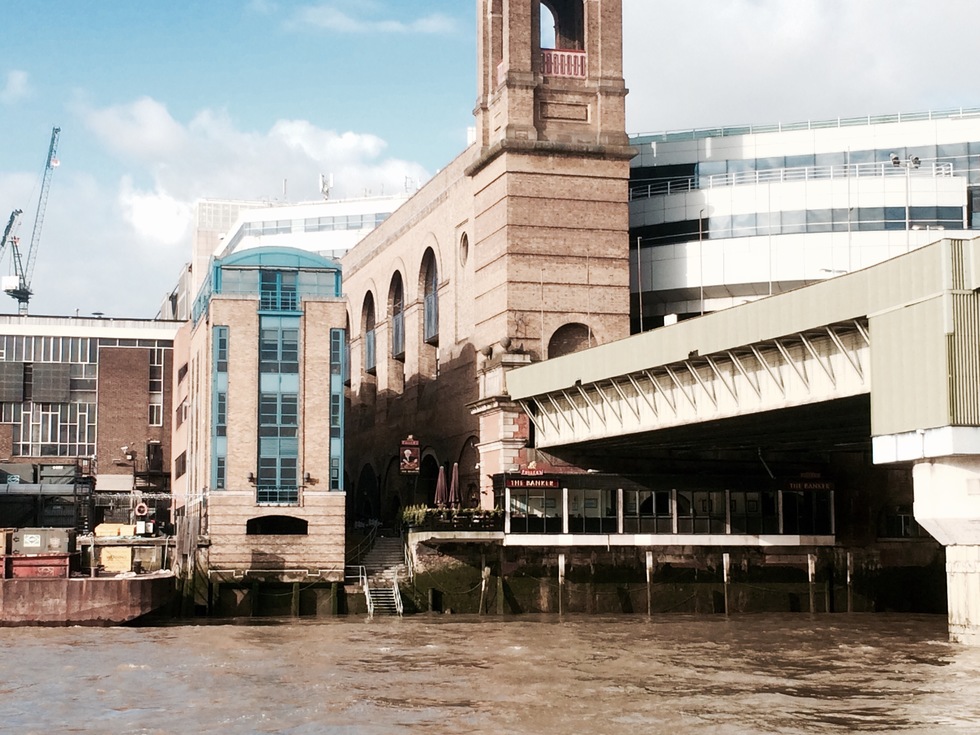 Jason Cochran
Cannon Street Station bridge
This is the very same section of the Cannon Street Station foreshore I had explored a few hours earlier: Very quickly, the stairs I used were inundated by treacherous, swift waters busy washing today's unclaimed secrets away.
"When I have been indulging this thought I have, in imagination, seen the Britons of some future century, walking by the banks of the Thames, then overgrown with weeds and almost impassable with rubbish. The father points to his son where stood St. Paul's, the Monument, the Bank, the Mansion House, and other places of the first distinction." —London Magazine, 1745
As it happens, the writer of that had it backward. It's the rubbish that makes the Thames exciting today.
Local Experiences
News