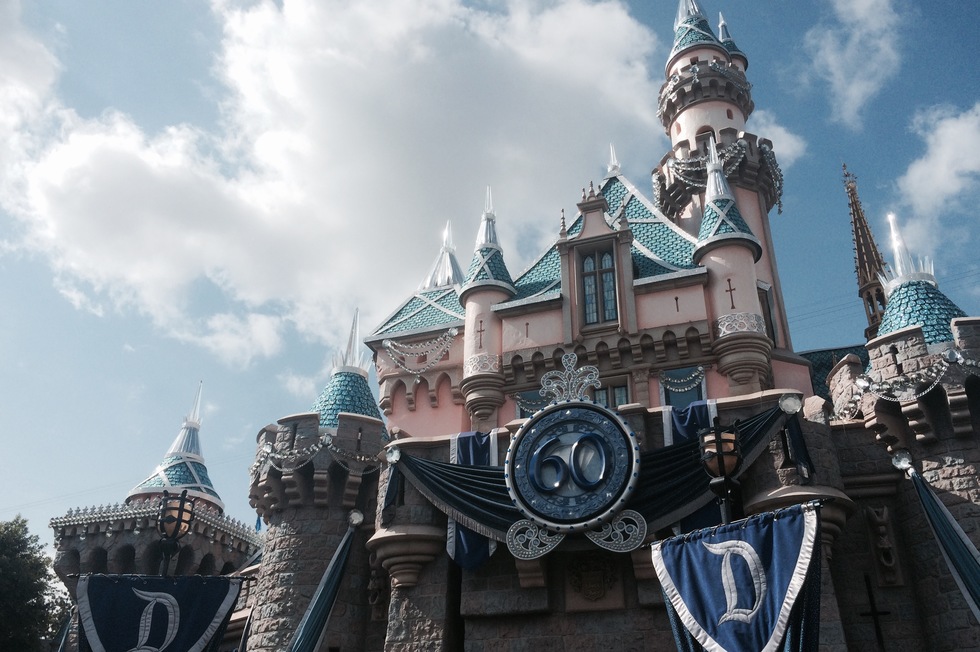 By Jason Cochran
Disneyland opened in July of 1955 with a now-legendary live television broadcast full of gaffes and false starts. But the Southern California landmark has more than made up for its rocky beginning by becoming one of the world's most beloved theme parks. For its 60th anniversary, in contrast to its birth, it is demonstrating a mastery of technological innovations including new twists on parades and water shows. 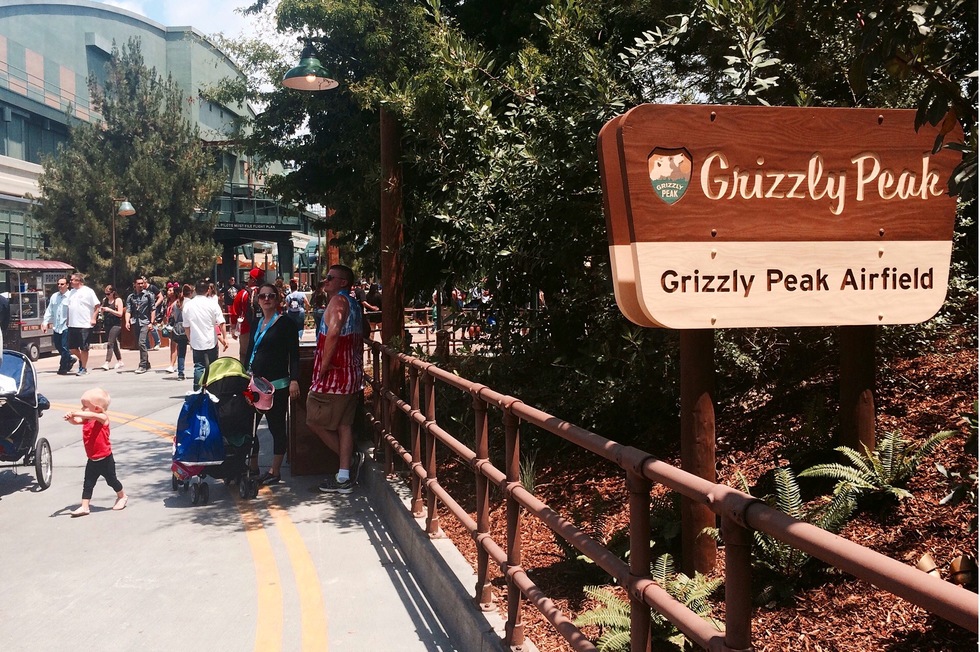 Jason Cochran
Attraction upgrades
The area around Soarin' in Disney California Adventure got a new look and new places to eat. Now, the signage is a tribute to the U.S. national parks (that families neglect to go see Disneyland). Inside Disneyland, the Matterhorn has been improved with deafening roar sound effects and new, lifelike Yeti figures that appear to leap for the bobsleds as they pass. And Peter Pan's Flight gets a new nursery scene in which the Darling children take flight for the first time. 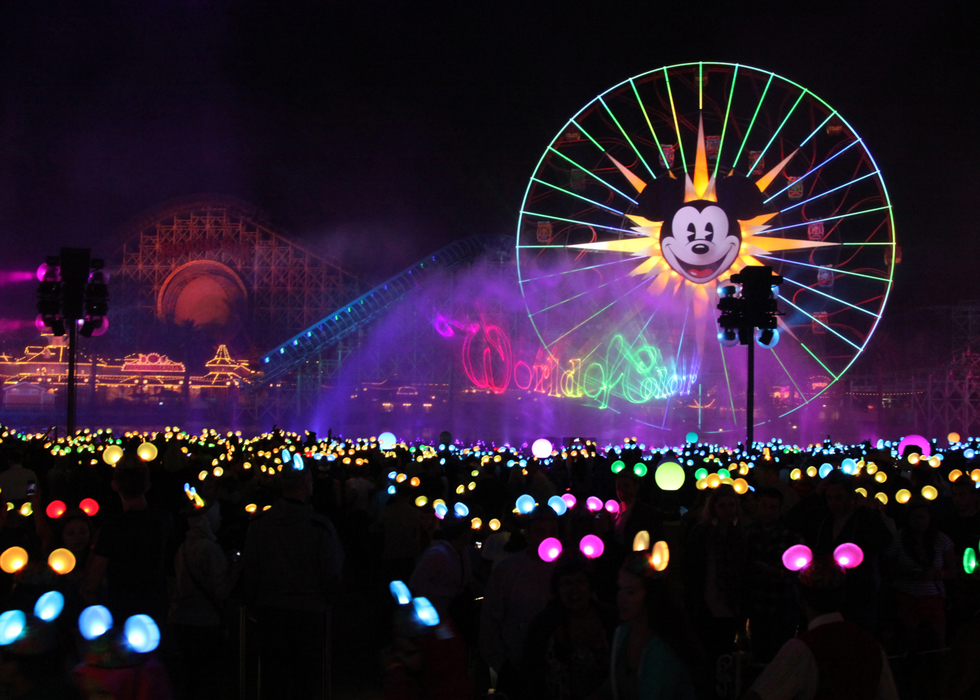 Disney Parks
World of Color
Disney California Adventure's World of Color, a Bellagio-style water show made more dazzling with massive projections, gets a new version called "Celebrate! The Wonderful World of Walt Disney". The new iteration eases up on the sky-high geysers (California's in drought, after all) and layers the spectacular with the oft-told tale of Walt Disney's creation of his animation empire. Neil Patrick Harris provides the filmed narration. Of course there's a sing-along of "Let it Go" from Frozen grafted uncomfortably into the middle, but the fireball-laden salute to Star Wars—a segment that leaves smoke rings drifting in the night sky—seems to thrill audiences the most. Even in the midst of a historic drought, Californians still know how to play in the water. 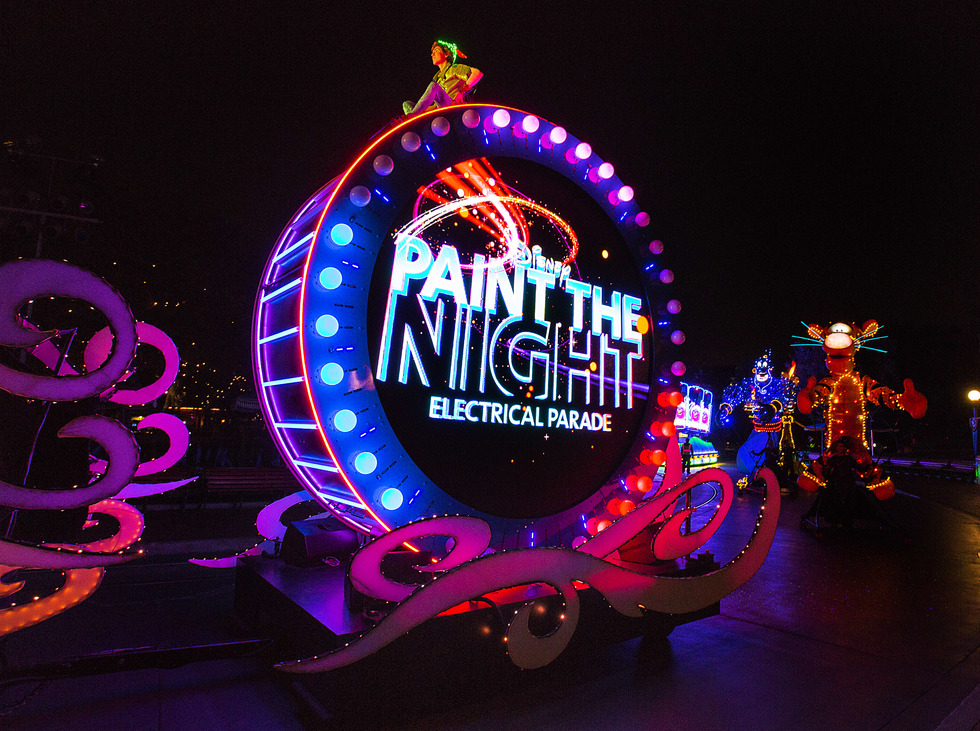 Disney Parks
Paint the Night parade
The Main Street Electrical Parade has been a favorite of Disney guests since the 1970s. But that was all about hot, old-style filiment bulbs. The modernized Paint the Night, launched for the 60th anniversary, is all about LEDs—1.5 million of them—which means performers can wear them more easily, lights can spin and chase with lightning speed, and floats can be exponentially more stunning. Some parades are perfunctory, but this one is a stunner: Tinker Bell, in an illuminated dress, hovers in front of the first float; Lightning McQueen and a 54-foot long Mack Truck shimmer by; Elsa and Anna ride atop a cool blue ice tower palace. One float (pictured) is a nod to the big bass drum that was the logo for the original Electrical Parade. But don't leave the parade early—the last one, a psychedelic vortex of swirling light pods, is the one that has crowds wondering how it was all done. 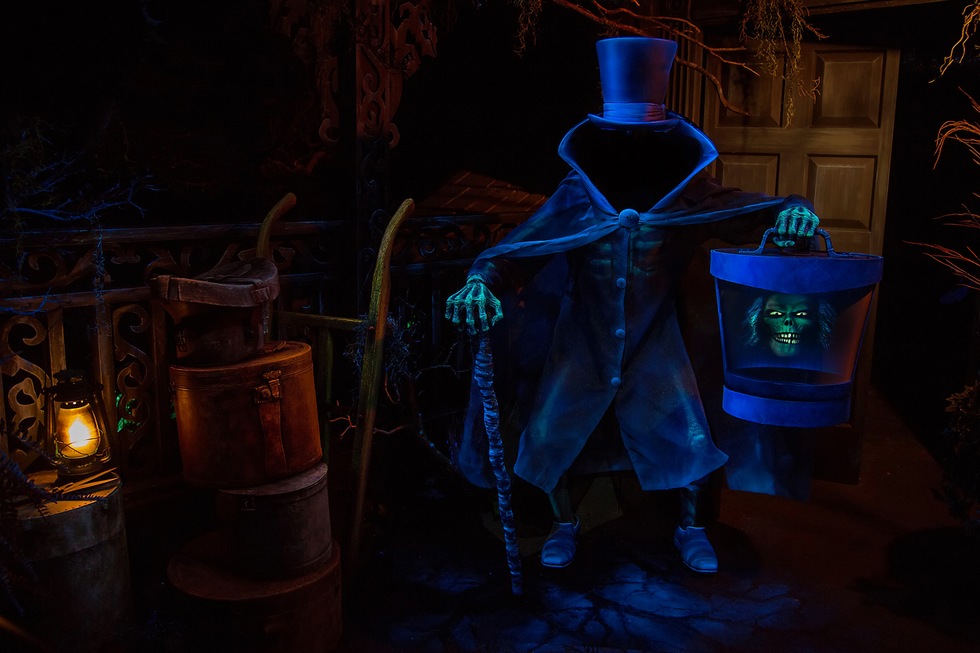 Disney Parks
The Hatbox Ghost
Disney nerds are particularly jazzed about the return of the Hatbox Ghost. The character has appeared in promotional materials for the Haunted Mansion ride since its debut in 1969. But the technology required to illustrate his signature move—his head vanishes from his neck only to re-appear in his hatbox—wasn't ready back then, so the original figure was removed from the attraction after a few months. A half-century does wonders for science, though, and now the Hatbox Ghost, his trick perfected, has been put back into the Haunted Mansion just following its attic scene. 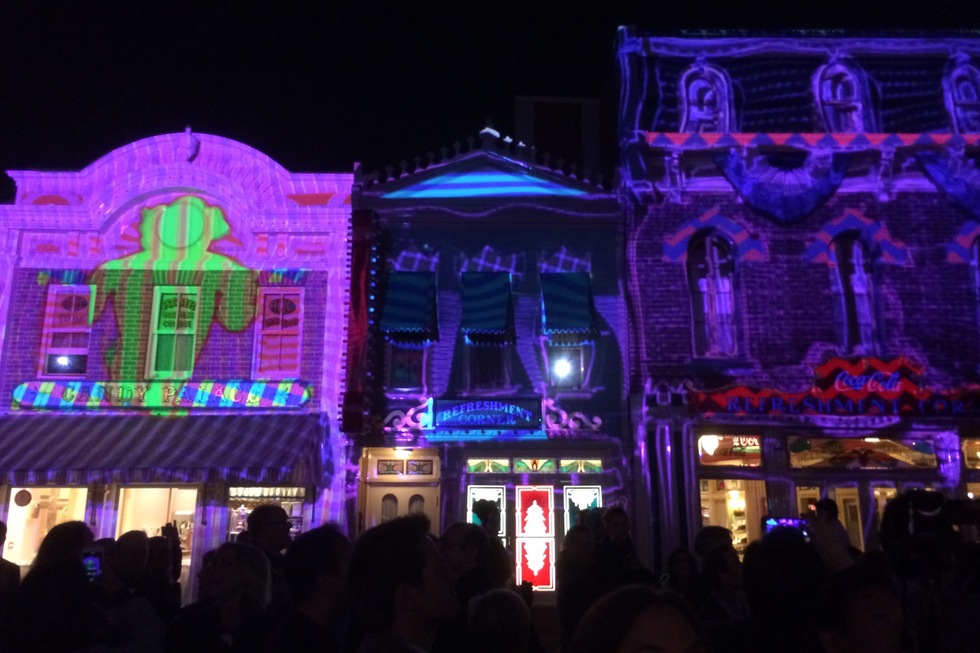 Jason Cochran
Disneyland Forever along Main Street
It used to be that guests crushed each other to pack into the forecourt "Hub" in front of the Sleeping Beauty Castle for the nightly fireworks show. But that may change, because for Disneyland Forever, the storefronts along Main Street, USA, are part of the spectacle. They're bathed in animated projections that make them appear as if they're jiggling, dancing, sprouting coral, and floating away in time to the soundtrack of the fireworks display. Used to be if you couldn't get closer to the Castle than the Emporium, you made do. Now the alley of Main Street is the place to be. Other places in the park are also gussied up in time to the music, including the Matterhorn mountain (which becomes a volcano), It's a Small World, and the Rivers of America, which come alive with a mists of waters for sychronized projections. 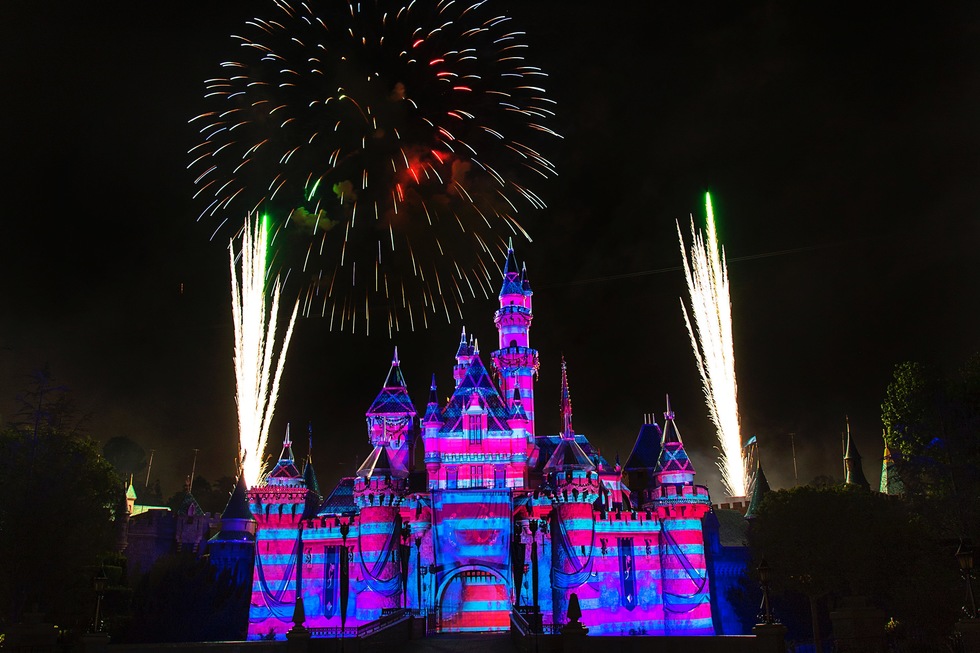 Disney Parks
Disneyland Forever fireworks
Sleeping Beauty Castle is only 77 feet tall, but during the new nightly fireworks show, Disneyland Forever, it's a giant screen for eye-bending projections as it shimmers with LED lights. Above it, Tinker Bell flies back and forth, as she has done for years, but his year, Nemo from Finding Nemo also appears to "swim" on wires overhead. And above and behind it, of course, those signature fireworks fly in symmetry, tied to the music, which includes a new song, "Live the Magic," written by Mary Poppins co-songwriter Richard M. Sherman. Combined with the projections on the park's landmarks, the culmulative effect easily makes for one of the best fireworks displays Disney has ever mounted. 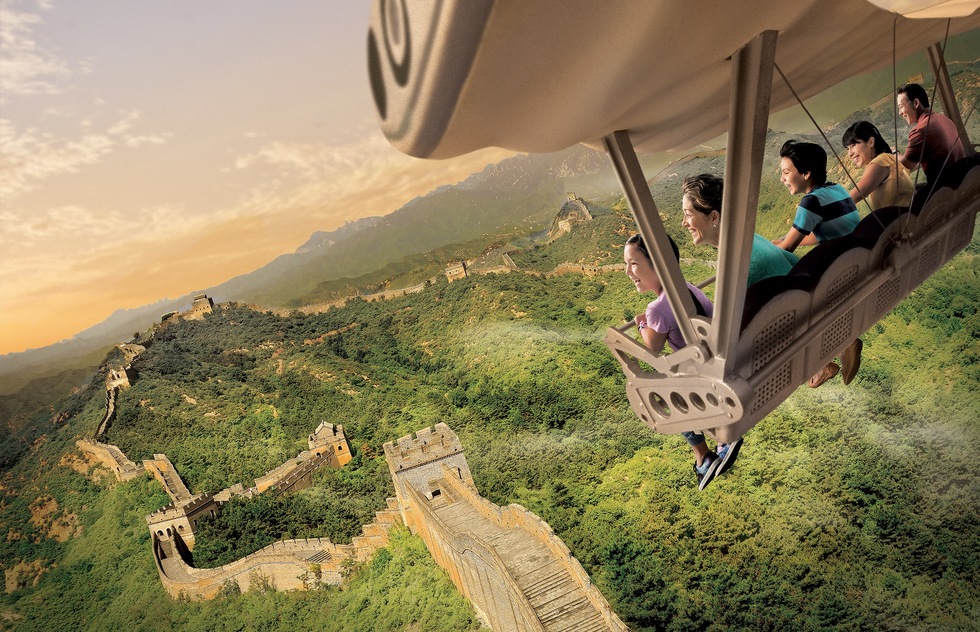 Disney Parks
Soarin' Around the World
Soarin' Over California—a gentle, extra-sensory simulated flight in front of a giant screen showing aerial footage—was an opening-day attraction at Disney California Adventure in 2001, and it was exported intact to Epcot in Florida four years later. It has since become one of Dinsey's most beloved attractions. But the movie, which was originally intended to be a booster film for the tourist sights found in the state of California, hasn't changed in 15 years. Disney finally filmed new footage, and the effort took the company around the planet to fly over the world's greatest landmarks. Buh-bye, shots of Pebble Beach and orange groves; the new version is now Soarin' Around the World. 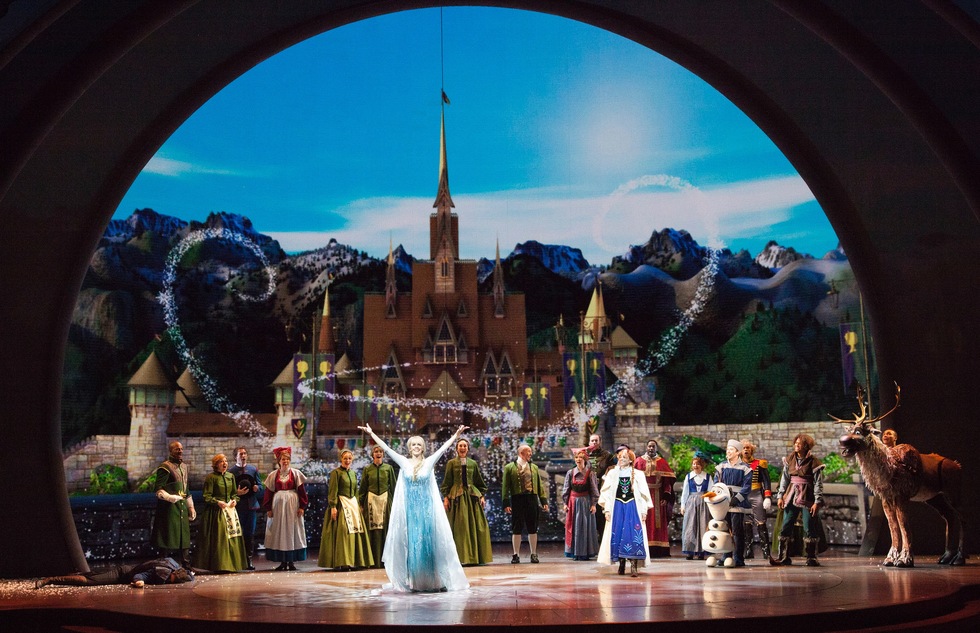 Disney Parks
Frozen—Live at the Hyperion
After 13 years, the beloved live version of the movie Aladdin played its final performance at the nearly 2,000-seat Hyperion Theatre inside Disney California Adventure. To replace it, the company recruited established Broadway talent for a high-tech, one-hour live version of this generation's animated musical phenomenon. The result, Frozen—Live at the Hyperion, performed a few times daily, raises the quality level of the typical theme park show. Don't be afraid to sit in the back, because the effects take up the width of the house, but either line up early or get a Fastpass for it, because this snowy show is white hot.
Theme Park