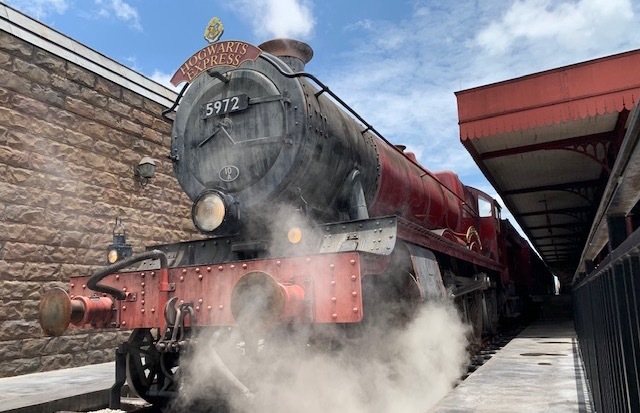 By Jason Cochran
The Wizarding World of Harry Potter at Universal Orlando has been an unprecedented smash in the world of theme parks. A big reason why is its remarkable number of details—which theme park insiders loosely call "theming." Millions have visited the two Harry Potter areas inside the Islands of Adventure and Universal Studios Florida parks, but there's so much to take in that most guests miss these fun little touches. These aren't on the maps—you have to discover them for yourself. 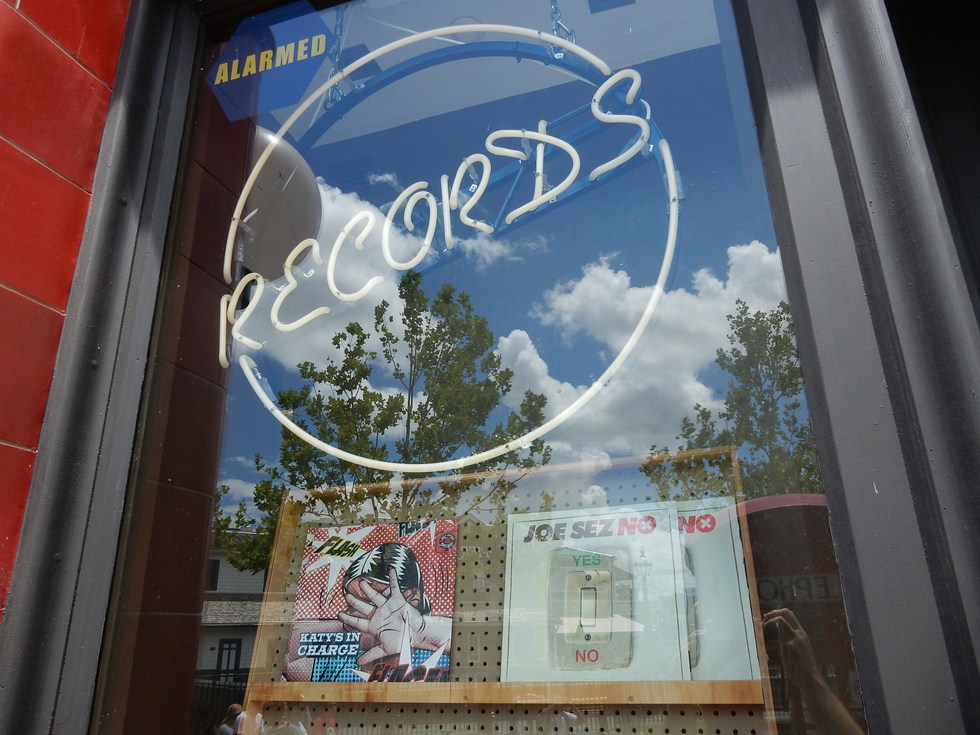 Jason Cochran
Record Store titles
Just as the windows of Main Street in Walt Disney World and Disneyland are painted with the names of people who helped build those parks, the record store window outside of Diagon Alley is filled with inside jokes about the making of The Wizarding World of Harry Potter. Joe Sez No looks like an '80s pop album, but it's actually a joke about Harry Potter author J.K. Rowling, who had total veto power over every idea Universal creatives came up with. Rowling gave thumbs up to every single thing presented in the park, down to the souvenirs and the candy. Along the way, she turned down so many concepts that it became a running gag behind the scenes.

Another LP, “Here’s to Swimmin’ with Bowlegged Women” by the Quint Trio, is a reference to Quint from the movie Jaws, who sings a song with those lyrics. Why Jaws? Because Diagon Alley was built where the old Jaws boat ride attraction used to be... 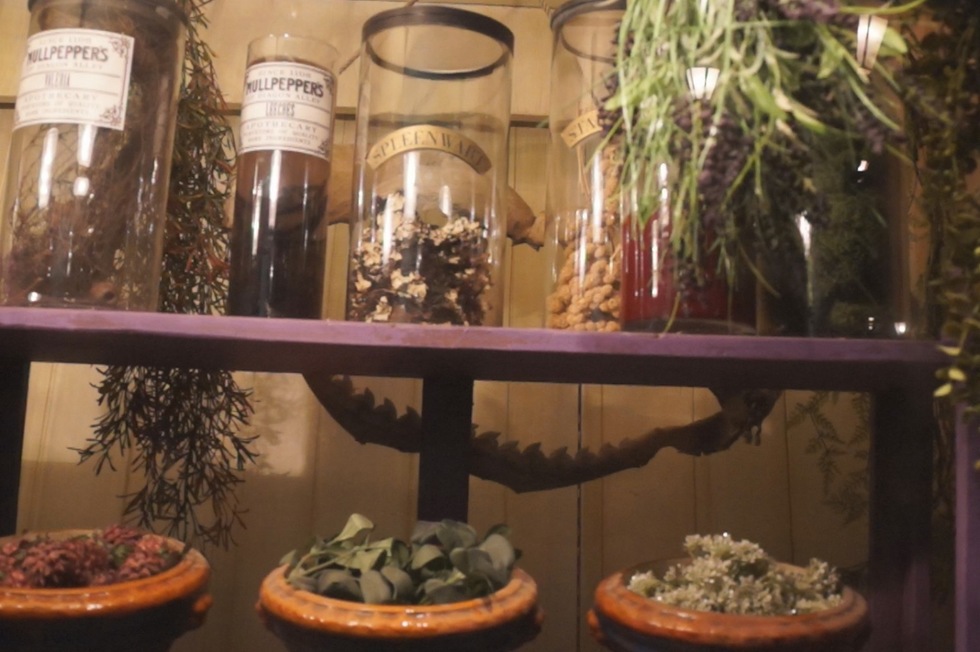 Jason Cochran
Mulpepper's jaw
...which also explains the shark jaw secreted away in the back of the display window of Mr Mulpepper's Apothecary, which in the books was a grocery store for potion ingredients. 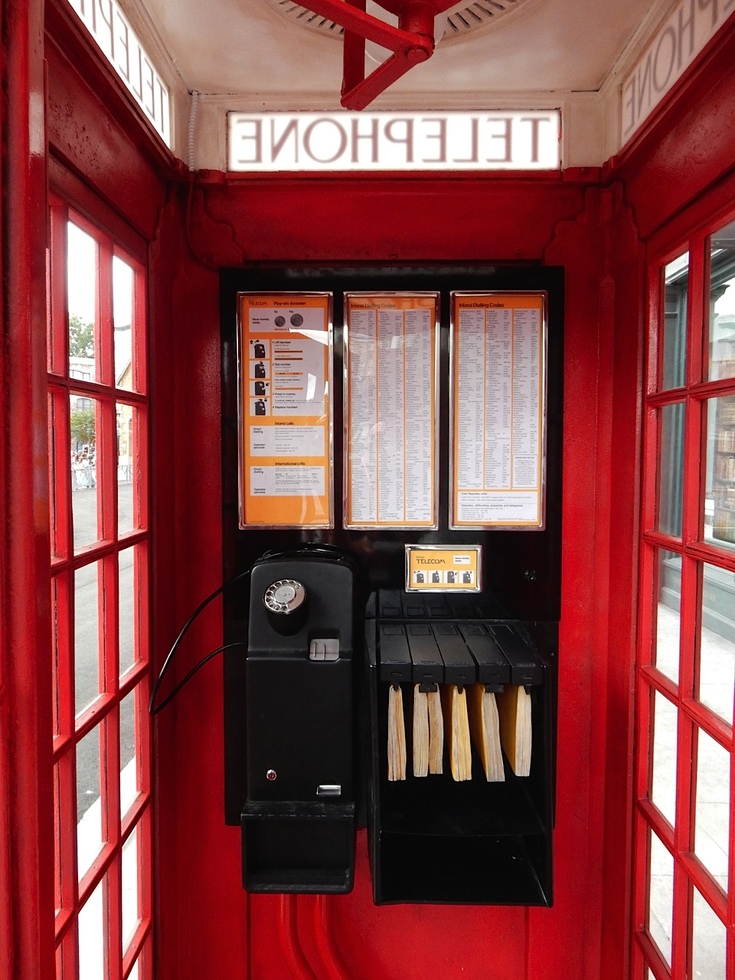 Jason Cochran
Phone box
The red telephone box standing outside the entrance to Diagon Alley doesn't seem to do much. The phone books aren't even really made of paper and the receiver appears to be dead. But if you dial M-A-G-I-C (62442), you'll hear a message from the Ministry of Magic. 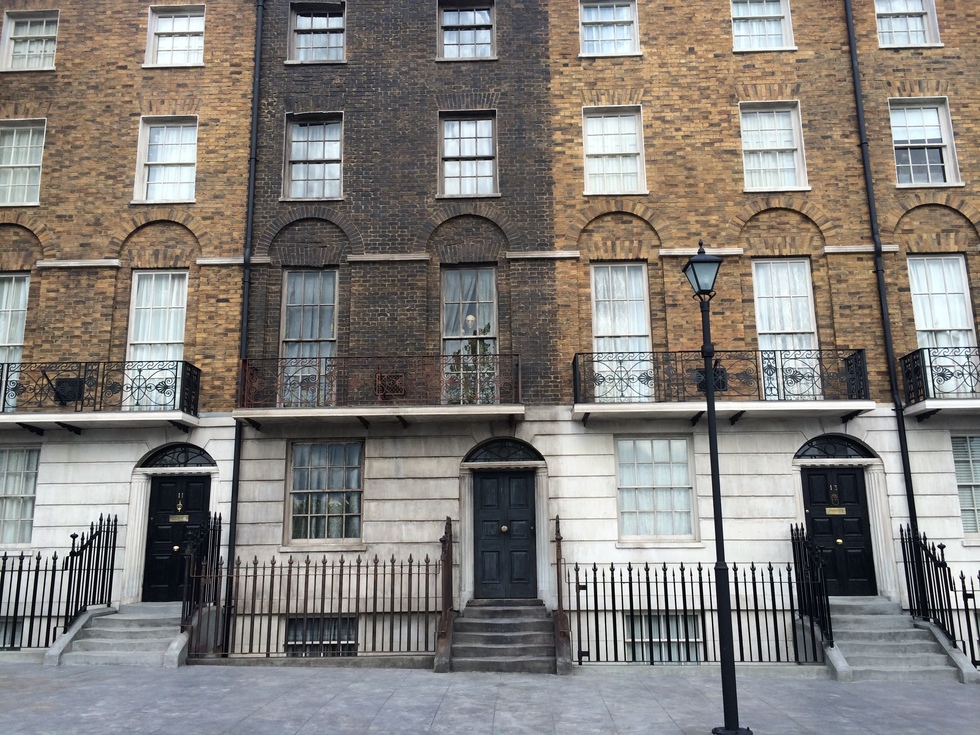 Jason Cochran
Kreacher, the House Elf
Stand outside 12 Grimmauld Place (the home of Sirius Black) long enough and eventually, you'll see its curtain shift and catch a glimpse of Kreacher, its House Elf, warily observing you from the gloom. 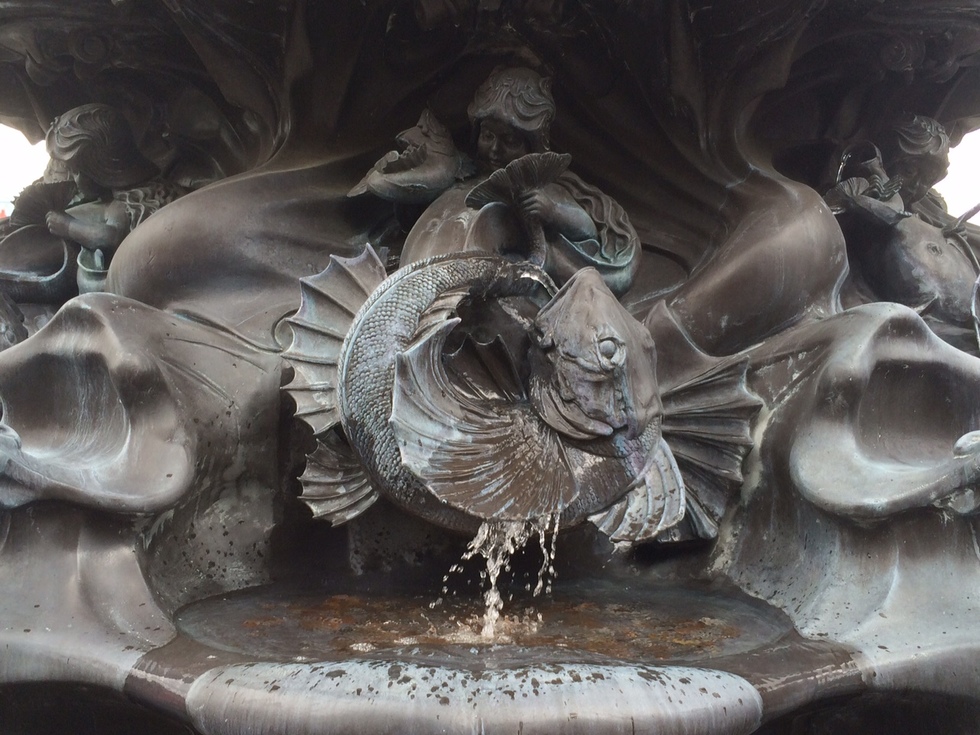 Jason Cochran
Alfred Gilbert's Eros Fountain
The smaller version of Alfred Gilbert's Shaftesbury Memorial Fountain from London's Piccadilly Circus is particularly fine. It's actually better than the original for one big reason: It still works. The real fountain, which Gilbert considered one of his best masterpieces, has been dry for years—so Orlando is the only place you can see it in its full, intended glory. 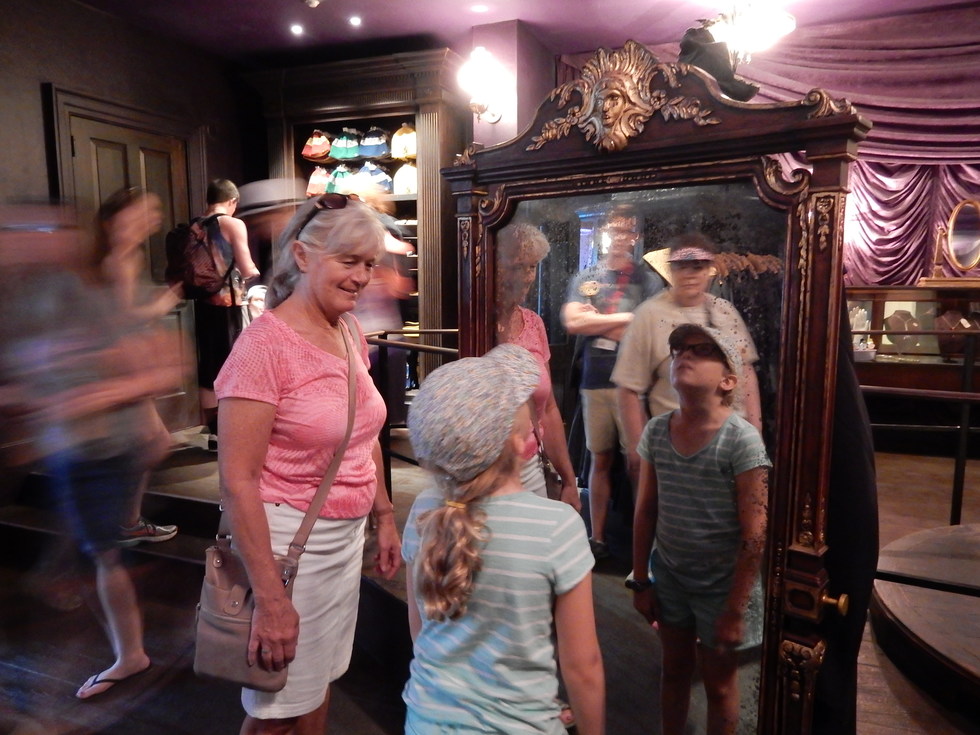 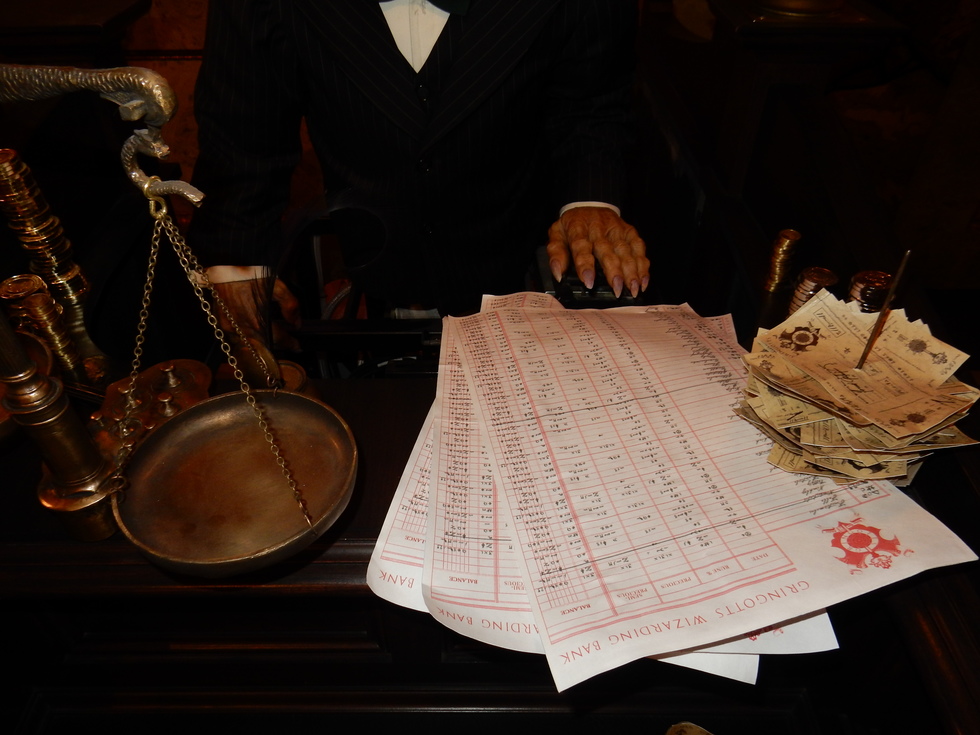 Jason Cochran
Bank clerks, Gringotts
You can't get close enough to them to see for yourself, but the haughty bank clerks counting cash at Gringotts are laboring over actual paperwork inscribed with goblin runes. Some of the gold they're minding was previously used as props in the Harry Potter movie series. (The same goes for some of the Quidditch equipment in the case at Quality Quidditch Supplies—it was used by the actors in the films.) 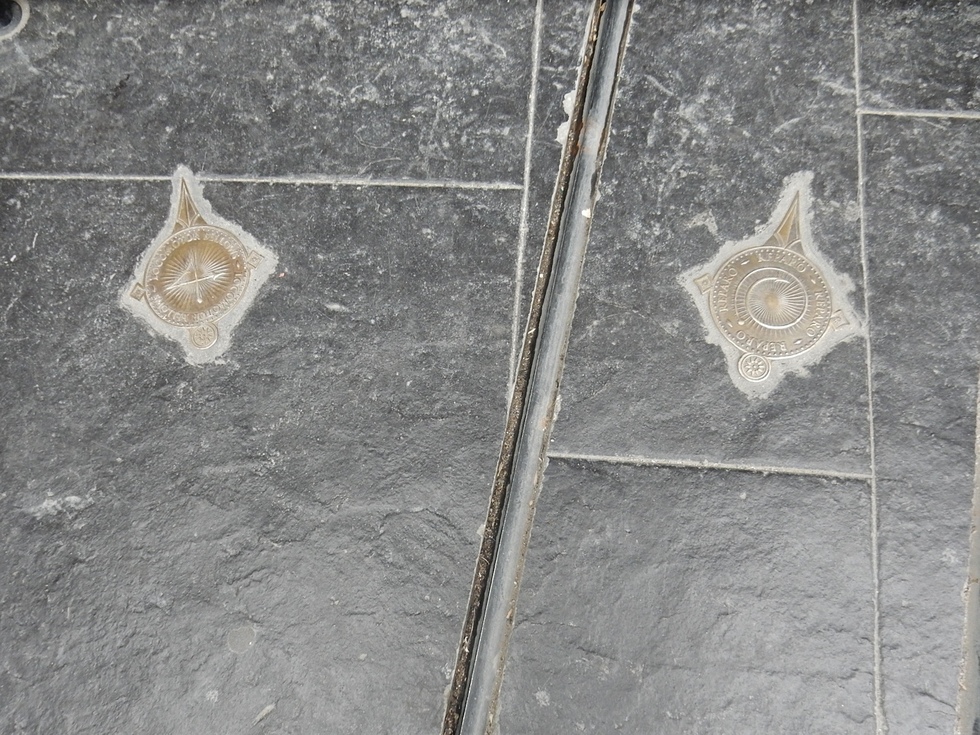 Jason Cochran
Hidden spells
Whenever you see a medallion in the flooring, it's the location of a secret spell. There are more than two dozen of them throughout both Harry Potter areas in the two parks. Armed with an interactive wand from Ollivander's Wand Shop (you have to purchase that separately, and they come with a map), you stand on the medallion, face the direction of its long point, and wag your wand in the pattern depicted on it—and something happens. It could be a prop coming to life, or a show behind a shop window, or a less pleasant surprise from a hidden spigot, so keep an eye out for wet spots that might warn you of potential consequences. 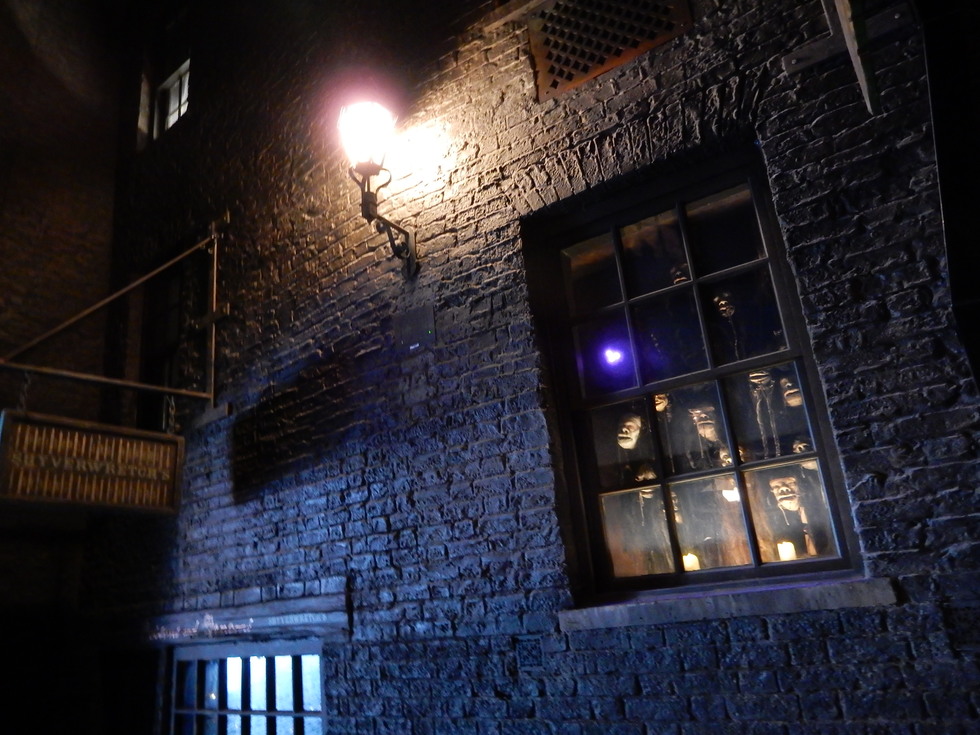 Jason Cochran
Singing Shrunken Heads, Knockturn Alley
One of the best secret spells is beside Borgin and Burkes in Knockturn Alley. Use your hidden spell map inside here, and UV light shows you clues that are invisible in the rest of Diagon Alley. Once activated, these shrunken heads come to life and sing as a chorus. One of the songs in their repertoire is another Easter egg: "Show Me the Way to Go Home" is something that the characters sang in Jaws. 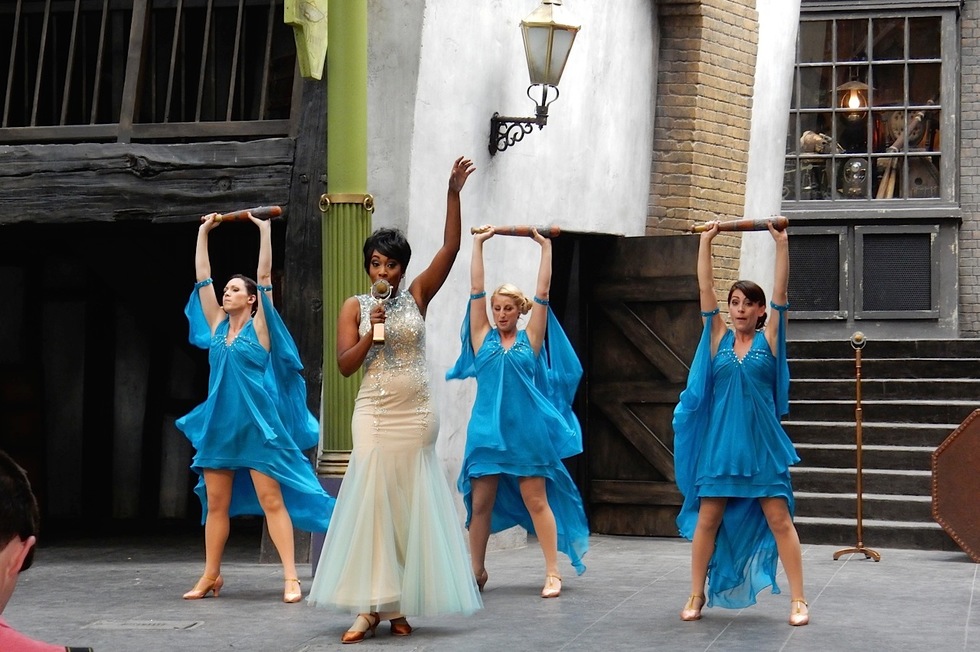 Jason Cochran
Celestina Warbeck
J.K. Rowling has said that Shirley Bassey-esque singer Celestina Warbeck is one her favorite characters that never made it into the seven-volume Harry Potter series. Although she was the favorite singer of Luna Lovegood, it took until the opening of Diagon Alley at Universal Orlando, when she was given a short revue in Carkitt Market, for Celestina to be realized in the flesh. Rowling was so enthused by her that a few months later, she re-opened her manuscript book on the Potter series and wrote new material just for her—a song she titled "You Stole My Cauldron But You Can't Have My Heart." It may the first time a theme park inspired a major writer to create material. 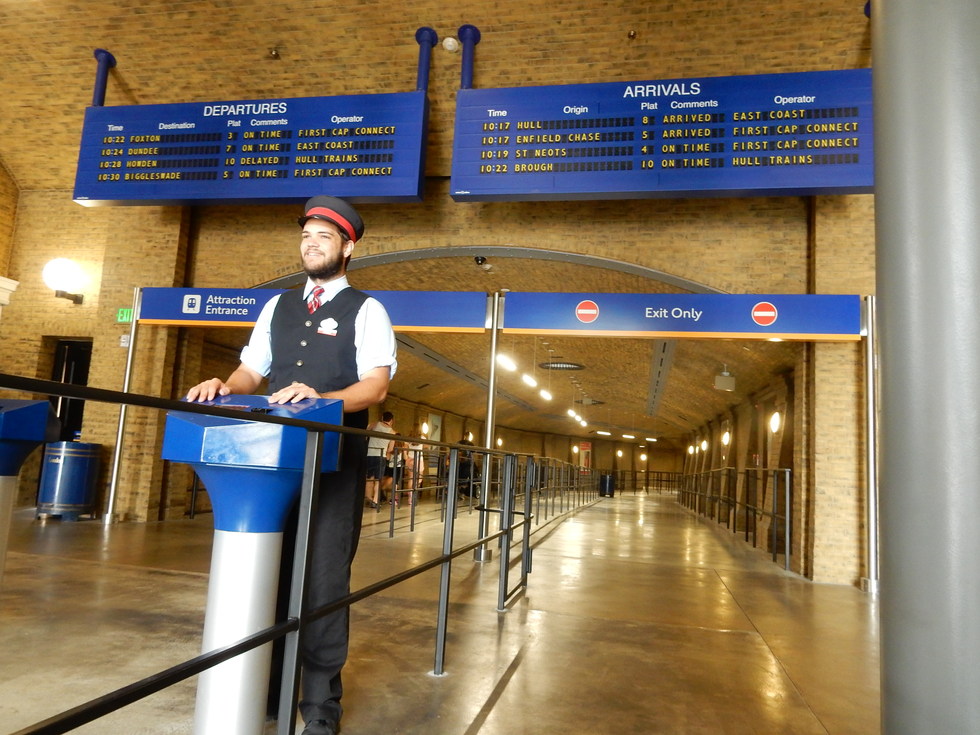 Jason Cochran
King's Cross Train Timetable
At the train station that takes you from Diagon Alley to Hogsmeade, the times on the train schedule correspond with real destinations and the actual time of day in the United Kingdom. Although the colors and brickwork are also impressively accurate—King's Cross really looks like that—the bricks are false. They were painted onto a thin layer of concrete. 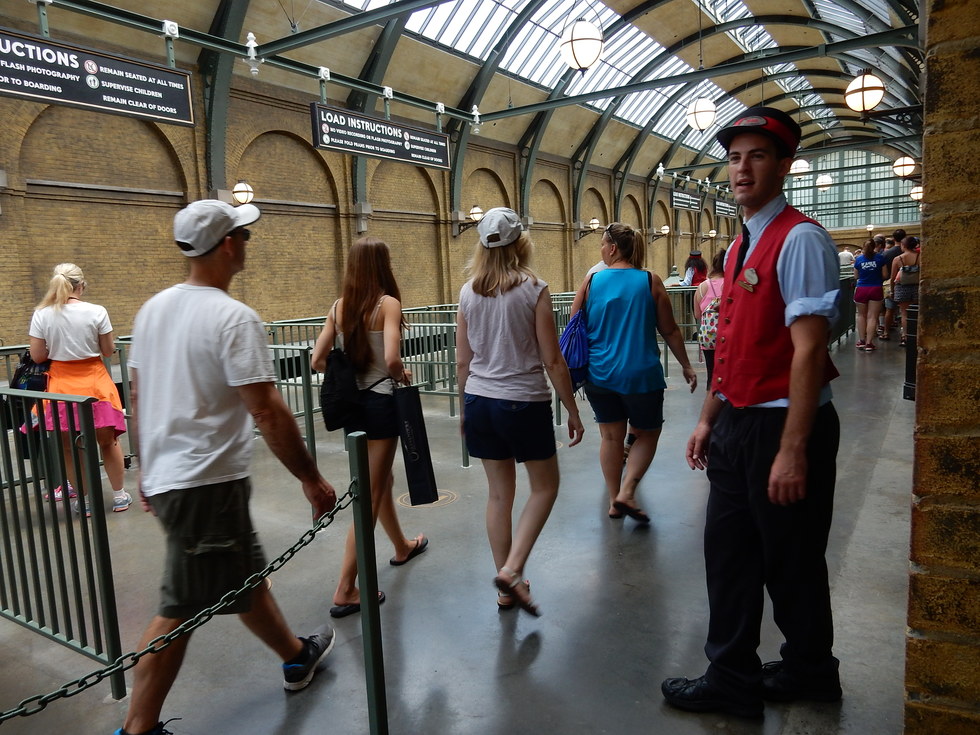 Jason Cochran
King's Cross Muggles
Sometimes the secrets of Diagon Alley extend to your interaction with staff. The platform agents at King's Cross are muggles, and as muggles, they aren't supposed to know anything about what happens in Diagon Alley. Try to engage them—they will claim to be puzzled by the strange carved wooden sticks you have carried out of it. 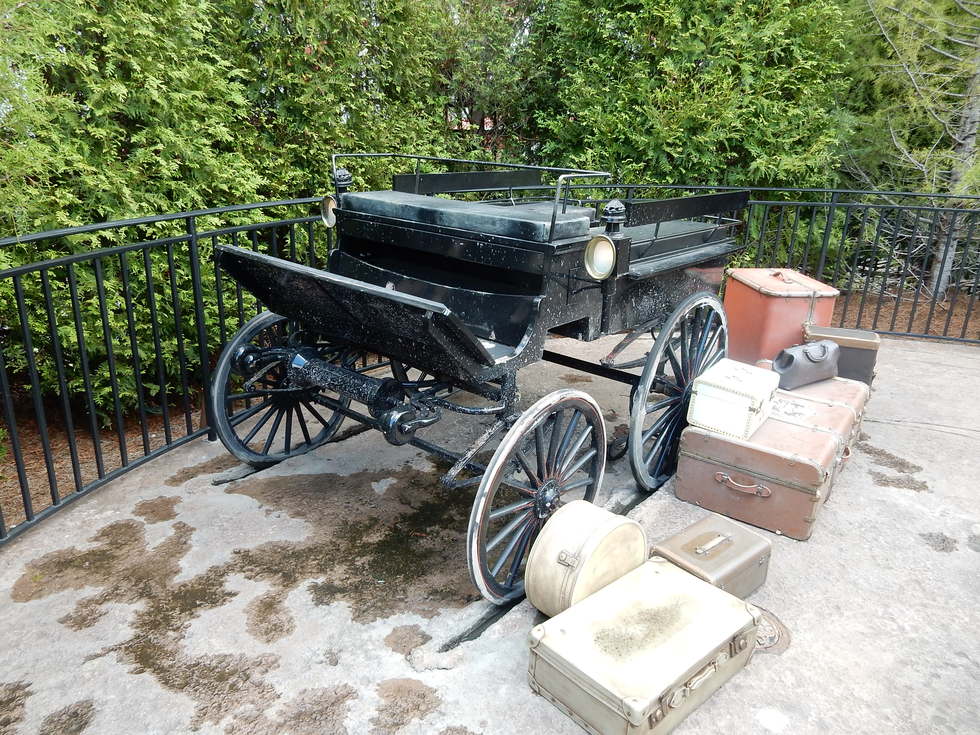 Jason Cochran
Thestrals Carriage
Between the Hogsmeade train platform and Hogsmeade village, you'll pass this easily-overlooked horseless carriage that is pulled by trained thestrals, a dangerous animal that looks like a skeletal horse with bat wings. Now and then, it leaps and shimmies—you can't see the thestrals for yourself because you're not a wizard and you haven't suffered enough. 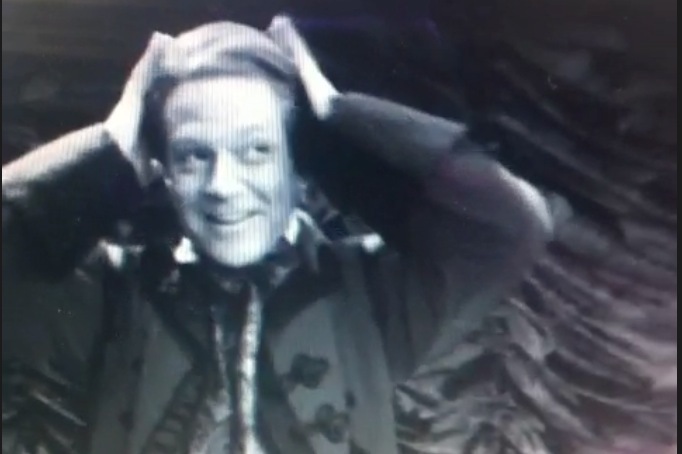 Jason Cochran
Gilderoy Lockhart
Kenneth Branagh appears in footage as the pompous Gilderoy Lockhart, incompetent substitute teacher and best-selling fraudster. Look in the window of the bookstore, where you'll also see his popular travelogues Travel with Trolls and A Year with the Yeti. A few of the movie actors appear in their own footage elsewhere, such as Helena Bonham-Carter as Bellatrix Lestrange in Knockturn Alley and on the Gringotts ride. 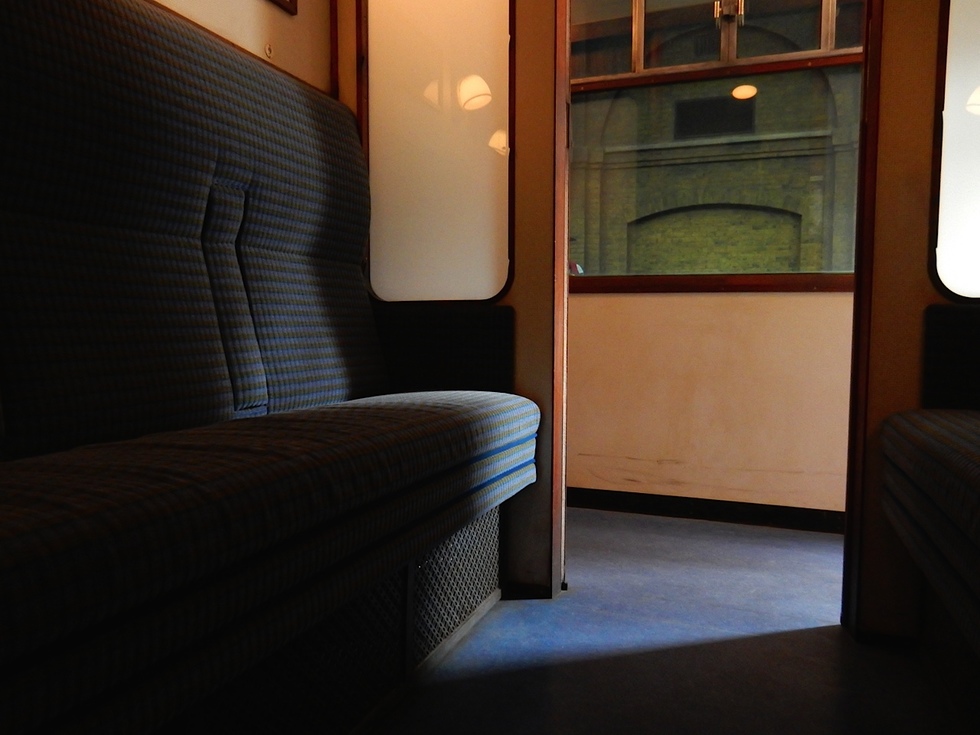 Jason Cochran
Hogwarts Express voices
If you think Harry Potter and Hermione sound a little odd as they pass by your compartment on the train ride, you're not wrong. Although they participated in shooting new material for the opening of Hogsmeade, the first phase of The Wizarding World of Harry Potter, Daniel Radcliffe and Emma Watson did not record new material for the opening of Diagon Alley and Hogwarts Express. Universal got other people to record their diaglogue.

For Frommer's' complete visual guide to what to buy at Diagon Alley, click here.
Theme Park