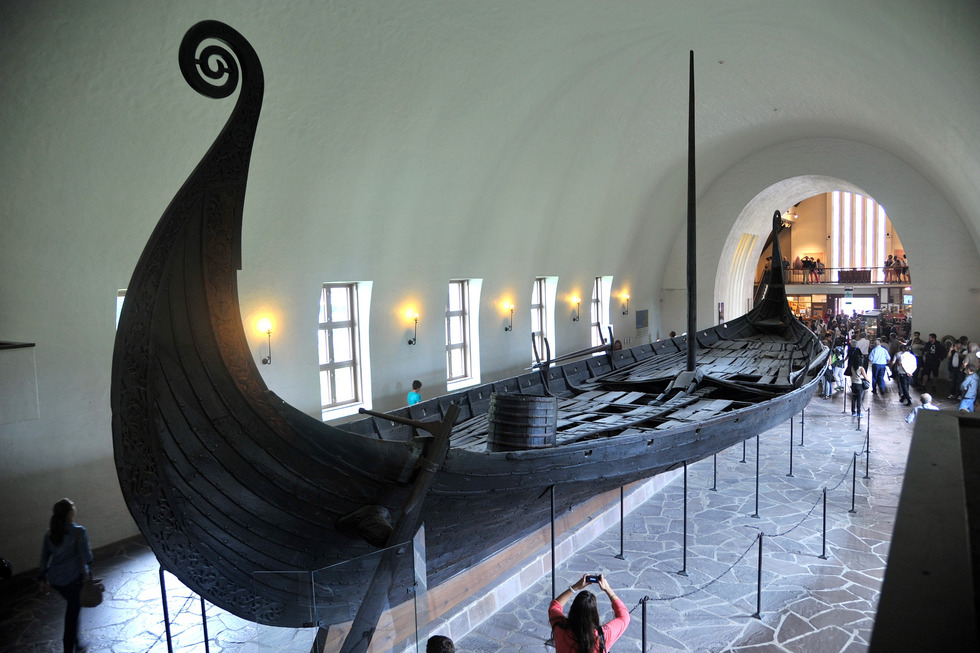 By
By Holly Hughes
Exploring, raiding, carrying precious cargo, fighting pitched battles at sea—throughout the ages, oceangoing vessels have shaped human history. In our age of jet travel and concrete highways, the allure of sail and oar is more romantic than ever. Standing on the decks of these historic ships—whether they’re still seaworthy or not—you can’t help but be swept up into their watery stories.

Pictured: The Gokstad ship in The Vikingskiphuset in Norway 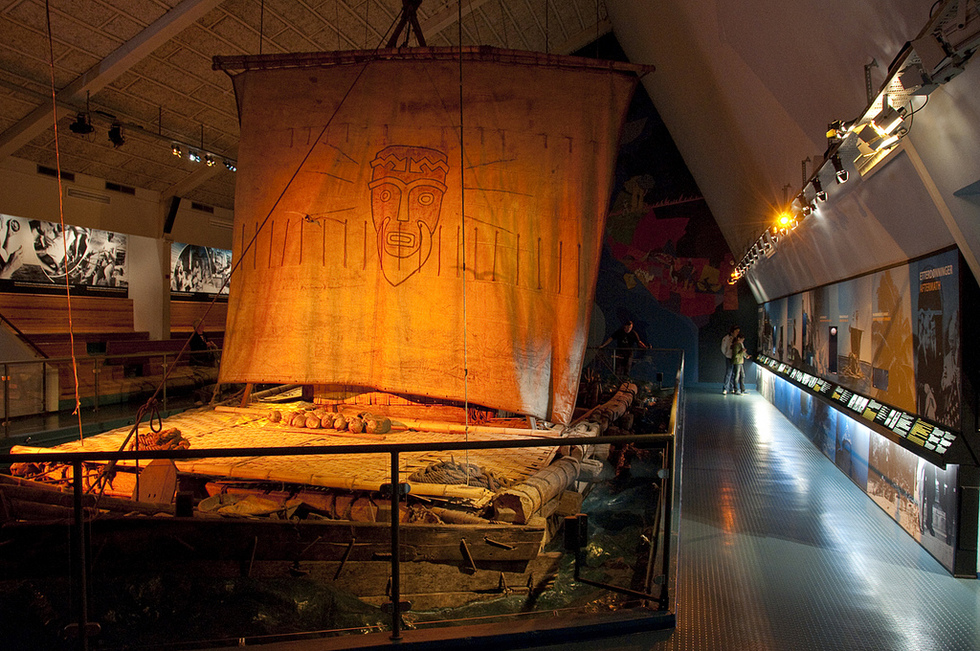 Mika Hiironniemi / flickr.com
The Kon-Tiki, Bygdøy Peninsula, Norway
Excite your inner Viking by making the quick ferry ride south from Oslo to see the ancient Viking funeral ships resurrected from the Oslofjord that are on display at the Vikingskiphuset. One of these ships, the Gokstad, was built in 850, during the peak of the Viking period. If the funeral ships aren’t quite Viking enough for you, you may wind up even more fascinated with another famous craft displayed nearby: the Kon-Tiki Museum. In 1947, young Norwegian scientist Thor Heyerdahl and five comrades sailed this primitive-looking 14m-long (45-ft.) balsa-wood raft, with its one large sail lashed to a mangrove pole, 6,880km (4,275 miles) across the Pacific, to prove that prehistoric South Americans could have settled Polynesia. Several of Heyerdahl's other intriguing sea craft are displayed as well. 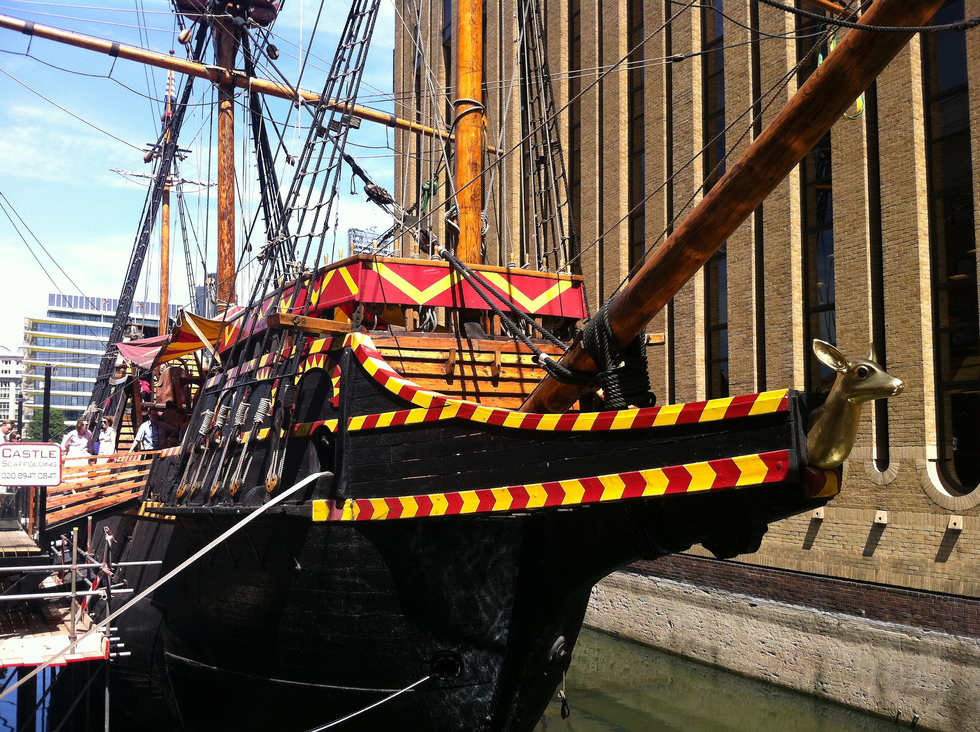 Robert Patton / Flickr
The Golden Hinde, London, England
Moored at the old dock of St. Mary Overie, right in the middle of London, it’s amazing to find an exact full-scale replica of The Golden Hinde, the Tudor galleon in which Sir Francis Drake made the first sea voyage that completely circled the globe, in 1577–80. Tiny as it looks, this modern replica—its square white sails boldly decorated with red crosses—has itself sailed around the world some two dozen times (When visiting, call ahead to make sure the ship is actually in port.). Costumed actors chat with visitors and reenact the liveliness of the original ship in its sailing days. 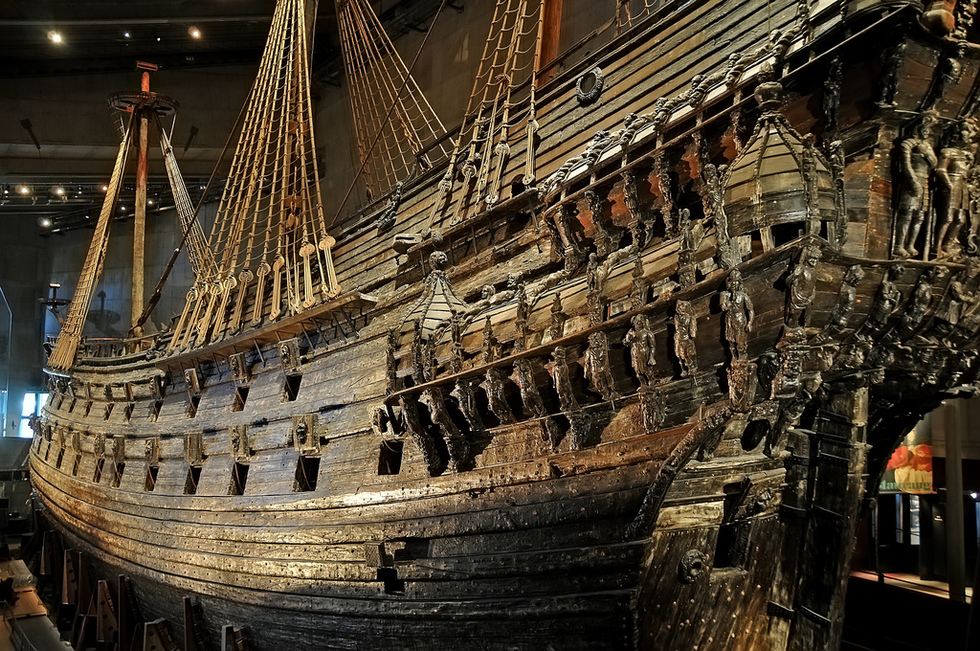 Dennis Jarvis / flickr.com
Vasamuseet, Stockholm, Sweden
The number-one tourist attraction in Sweden is an old boat—the oldest complete boat in the world, in fact, hauled up from the floor of Stockholm Harbor in 1961 and gloriously resurrected. Built in 1628, the warship Vasa was designed to intimidate opposing navies, with 64 powerful guns, two gun decks, and some 700 painted and gilded sculptures bristling from its decks. Tragically, it sank the day it was launched, overbalanced by those massive guns. In 1961, it was meticulously hauled to the surface and restored, along with a trove of 17th-century objects found on board; it rests today in its own high-raftered ship hall on Stockholm’s museum island, Djurgården. 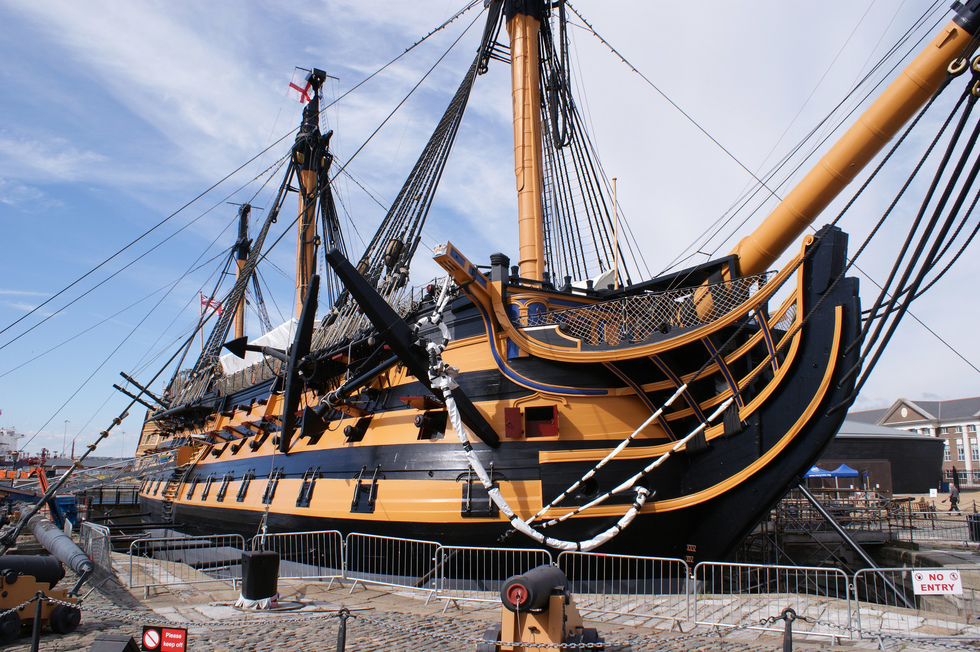 Hugh Lllewelyn / flickr.com https://flic.kr/p/fq4mfL
HMS Victory, Portsmouth, England
Among the many ships on display in this historic English naval base, the star of the show is the HMS Victory, the flagship of Admiral Nelson’s fleet during the Napoleonic wars. Launched May 7, 1765, this 104-gun ship is the oldest commissioned warship in the world. On October 21, 1805, it led the Royal Navy to a decisive victory at the Battle of Trafalgar, though a bullet claimed Nelson’s life. Next to the Victory, the Royal Naval Museum houses relics of Nelson, as well as ship models, figureheads, medals, uniforms, weapons, and other memorabilia. 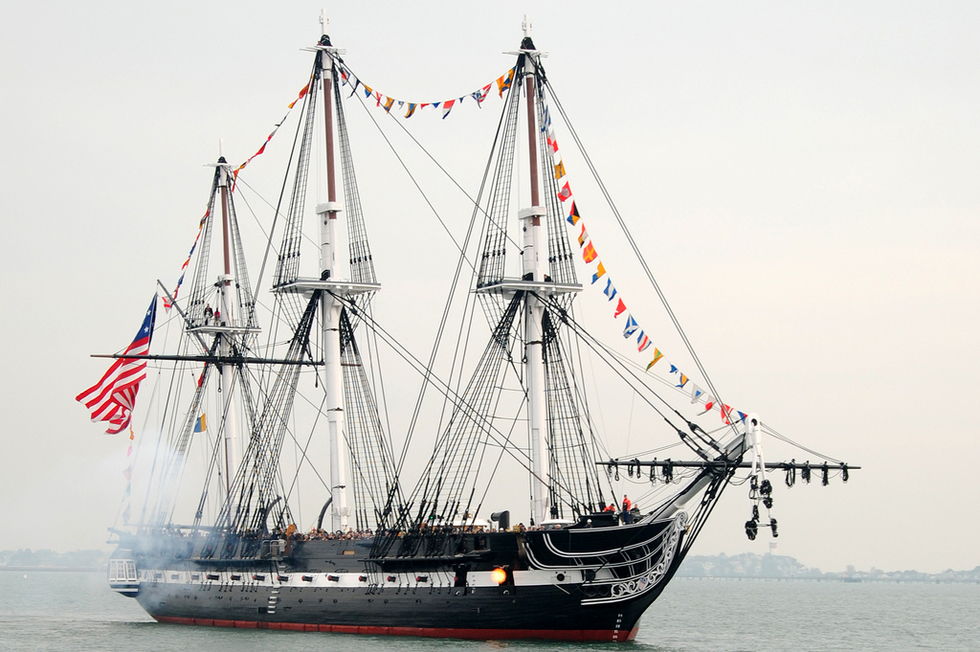 DVIDSHUB / fickr.com
Old Ironsides, Charlestown, Massachusetts
The final stop on Boston’s Freedom Trail is the frigate USS Constitution, fondly known as Old Ironsides—a hero of the War of 1812. Built in 1794–97 (many of its fittings were forged in the foundry of Paul Revere), this hardy warship never lost a battle in its 18 years of active service; it participated in no fewer than 40 engagements and captured 20 of His Majesty’s vessels. It won its nickname on August 19, 1812, when shots from HMS Guerriere bounced off its thick oak hull as if it were iron. Today, active-duty sailors lead tours on deck, wearing 1812-vintage dress uniforms. 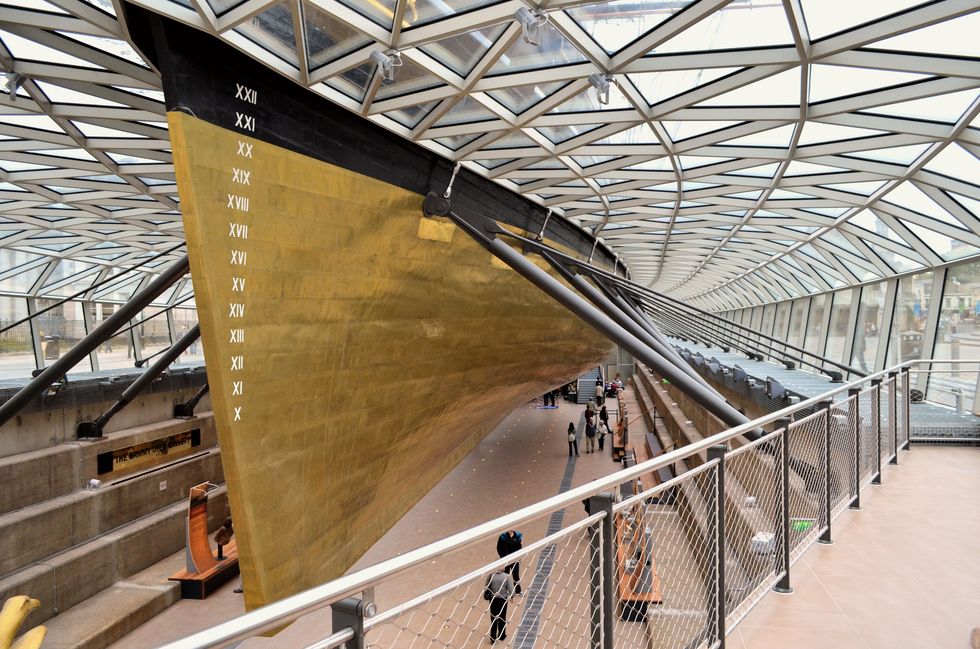 Gary Holmes / Flickr.com
The Cutty Sark, Greenwich, England
A short boat ride east of London on the Thames, at Greenwich Pier lies the ultimate word in sail power: the sleek black three-masted Cutty Sark, the greatest of the clipper ships that dominated the late 19th-century tea trade from China. You can’t help but be mesmerized by her 43 sails, 11 miles of webbed rigging, and towering 46m-high (152-ft.) mainmast, ingeniously designed to catch every breath of wind on the ocean. Launched in Scotland in 1869, the Cutty Sark shattered speed records for its era, traveling up to 584km (363 miles) in 24 hours. A massive restoration project was completed in 2010 and the ship is now displayed to maximize visibility from all angles. 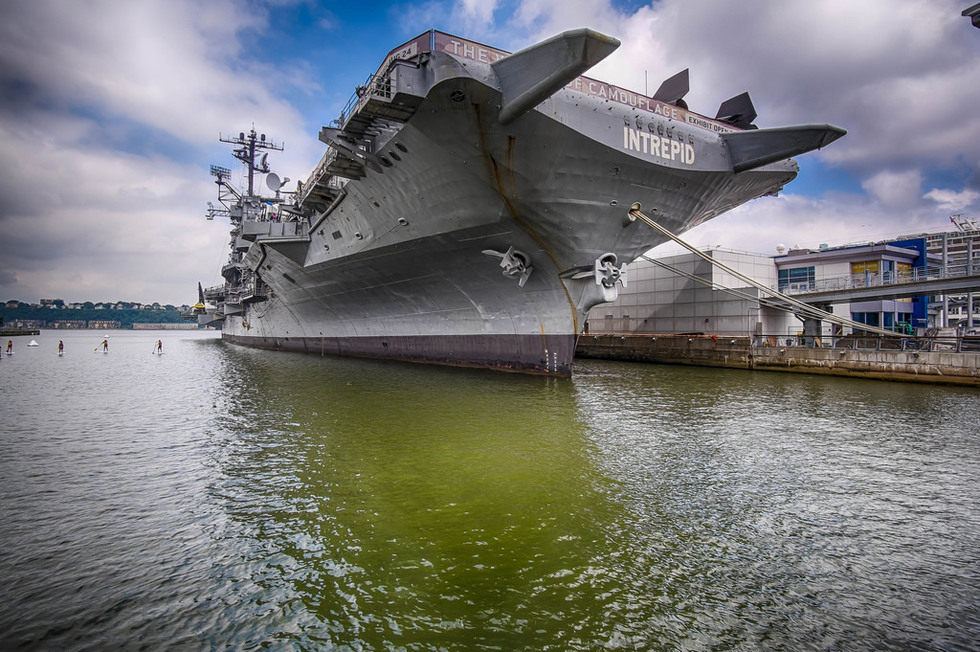 Theodore Lee / flickr.com https://flic.kr/p/ozJ6Uc
The Intrepid, New York, New York
This vast grey aircraft carrier—nicknamed “The Ghost Ship” because it survived 7 bombings, 5 kamikaze raids, and one torpedo hit—sits moored today in New York City, its decks holding a rambling military museum. On the wind-whipped landing deck, maneuver around stealth bombers, fighter jets, and choppers; below, on the cavernous hangar deck, exhibits celebrate all branches of the armed services. While some areas re-create day-to-day life on board a carrier—the dorm-like Marine berths, the mess deck—others display uniforms, weapons, equipment, vintage aircraft, and memorabilia. Moored across the pier are even more craft to explore: the nuclear missile submarine Growler and the retired supersonic jet Concorde and the latest attraction: an actual space shuttle.
Arts and Culture
Cruise