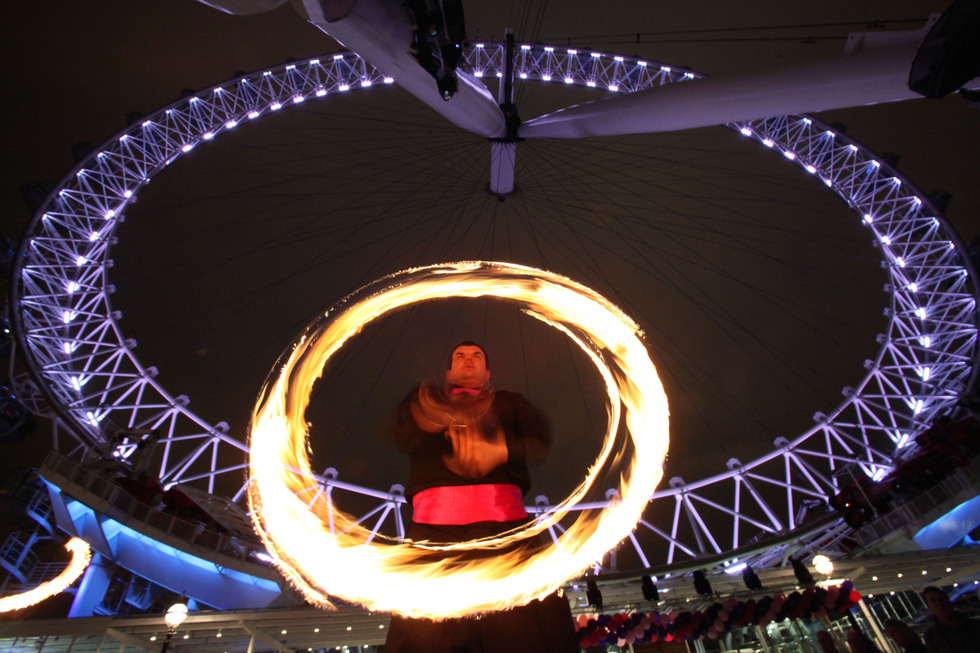 The London Eye: Weird and Wonderful Pictures Through the Years

By Jason Cochran
The London Eye turned 15 in 2015. Although Londoners weren't sure about it at first—how dare it dwarf the tower containing Big Ben!—the tourist attraction quickly came to define the city's skyline. Now a trip to London wouldn't be the same without it.

"The Eye has done for London what the Eiffel Tower did for Paris, which is to give it a symbol and to let people climb above the city and look back down on it," wrote Pritzker-winning architect Sir Richard Rogers. "Not just specialists or rich people, but everybody. That's the beauty of it: it is public and accessible, and it is in a great position at the heart of London."

The Eye has been copied across the world, but nowhere else has it become such an essential part of a place's fabric. In celebration of this tourism icon, we dipped into the Eye's archives to find some of the odder—and more beautiful—moments from its 15 years.

Coca-Cola London Eye
Late 1999: Hoisted into place
Originally called the Millennium Wheel, it was part of London's efforts to create new tourist attractions to celebrate the turn of the century. Sections of the Wheel were transferred by barge up the Thames, assembled flat, and the resulting circle was hoisted up by 2 degrees an hour. But then a crucial hoisting cable snapped, and the Wheel got stuck for days. It was finally fully in place by October 17, 1999—and was immediately colonized by protesters from India and Spain who were trying to stop construction of new dams. "We chose the Millennium Wheel because, like the dams, we don't think it serves any purpose," one told the press. They were arrested. 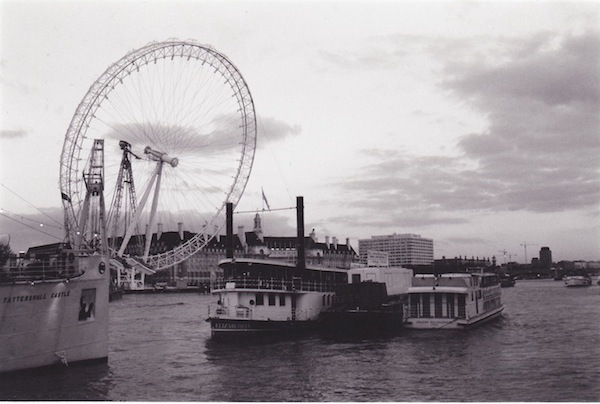 Jason Cochran
Late 1999: Missed deadlines
The complexity of the construction was hampered by unusually intense high tides. By the time Wheel went vertical, it was a month behind schedule, installation of the capsules had to be delayed to early November, and planners missed their target of sending riders on their first spin at the stoke of midnight from Big Ben on New Year's Eve.

The Wheel, which by now was beginning to be called the London Eye, began turning at 8pm that evening when then-Prime Minister Tony Blair fired a laser at it from across the river. British Airways, the attraction's then-sponsor, flew one of its Concorde jets overhead in tribute. Instead of riding, though, VIPs had to stare at it from a barge. Passengers were not cleared to ride until March, 2000.

For the record, Blair's commemorative words: "To everyone here and throughout Britain, have a happy and wonderful New Year. From us all here in Britain to people throughout the world, we wish you peace, we wish you prosperity in the new millennium." 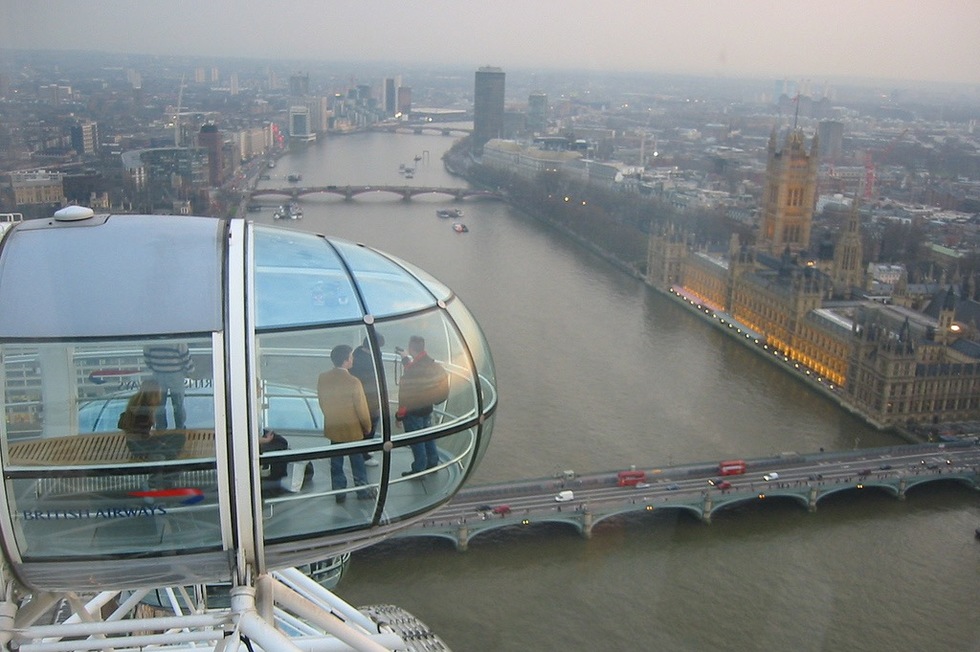 Ben Paulos/Flickr.com
2002: Made permanent
The London Eye originally had permission to remain for only five years. But July of 2002, when it marked 8.5 million visits, the local government realized that removing it would eliminate a vital attraction that was now known to tourists worldwide. Lambeth Council, which controls the river bank on which it's attached, gave permission to make the ride permanent.

This image, from early 2003 (before the towers of Vauxhall were built in the background), bears the livery of British Airways, its sponsor until 2008. 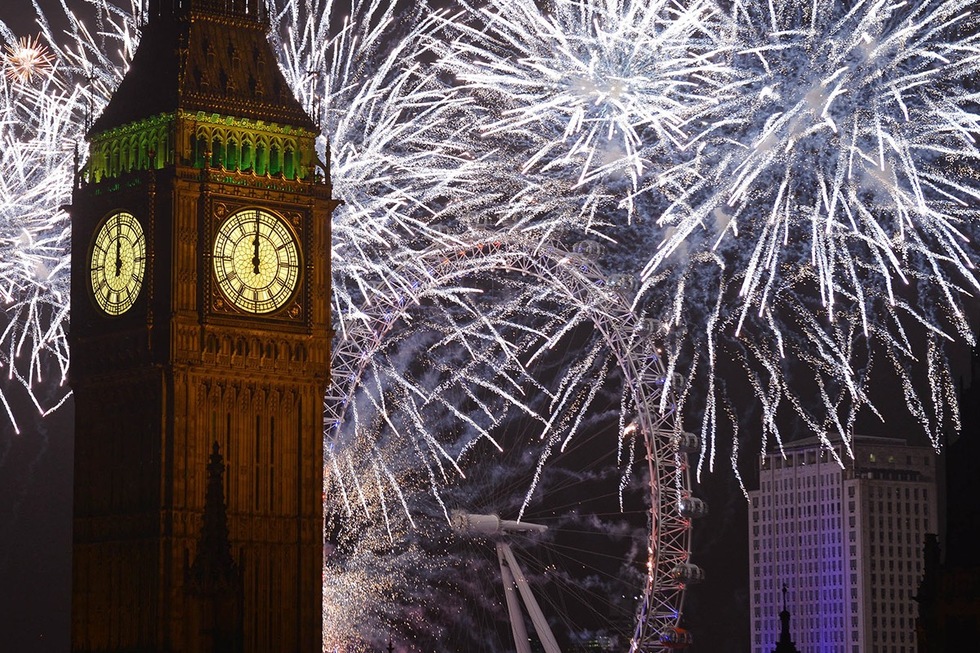 Coca-Cola London Eye
2005: London's New Focus on New Year's Eve
Since the first day of 2005, the London Eye has served as the focal point for the city's annual fireworks display over the Thames—the structure of the wheel is now fitted with pyrotechnics for the big countdown. 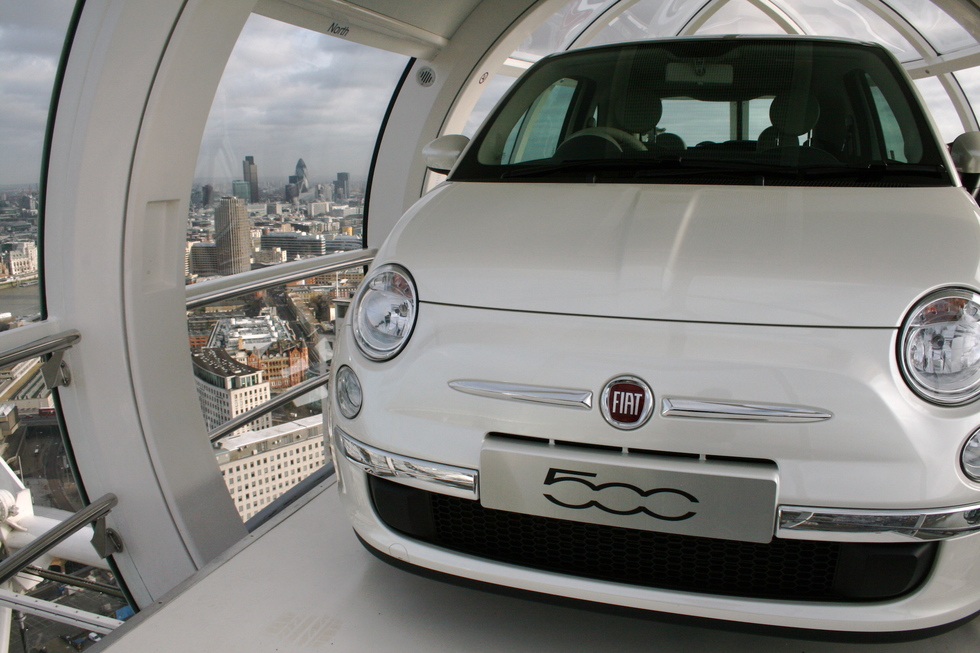 Coca-Cola London Eye
2008: Fiat 500 Flies on the London Eye
Increasingly, corporations want the luster of the Eye to rub off on them, and they pay millions of pounds to mount costly promotional events. In January of 2008, Fiat squeezed one of its new Fiat 500 cars into one of the capsules and let it ride for two weeks. It racked up 84 miles that way. 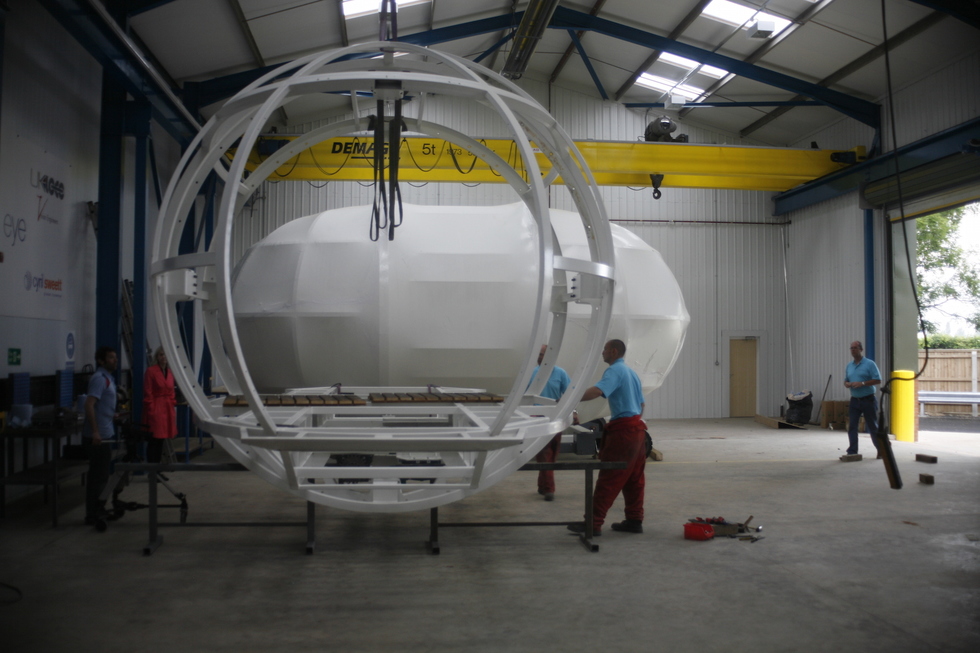 Coca-Cola London Eye
2009: Capsule refurbishment
In preparation for the influx of visitors for the 2012 Olympics, capsules were individually removed, replaced with a spare to keep the wheel balanced, and trucked to the city of Worcester, where they were given new ventilation and new ceiling-mounted monitors and Wi-Fi. One by one, the pods were wrapped, floated down the Thames, fixed up, and returned until all 32 had been renovated. The project cost £12.5 million (nearly $20 million in U.S. dollars). 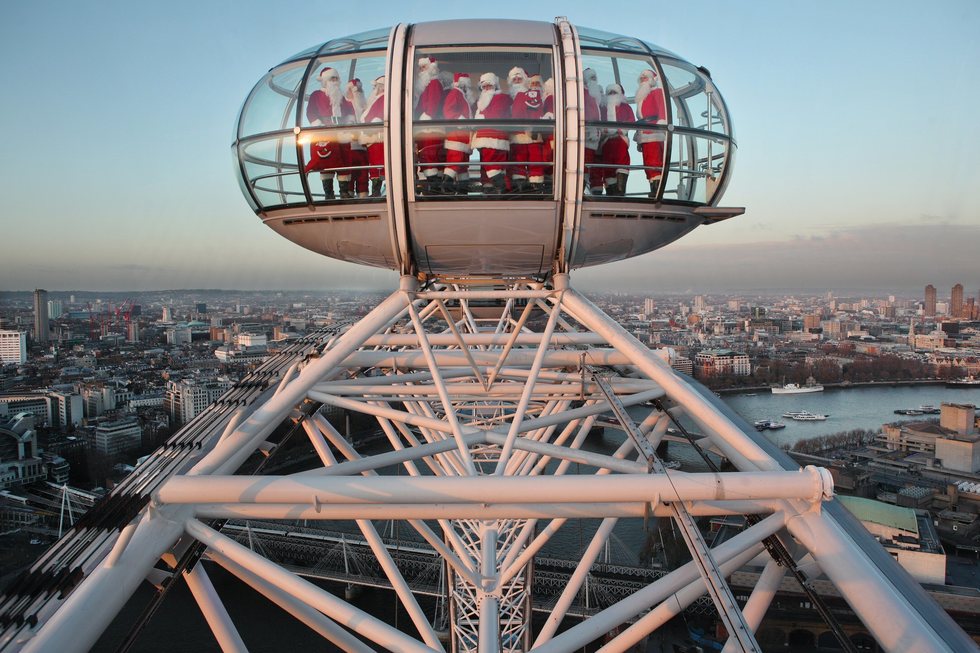 Coca-Cola London Eye
2011: Fathers Christmas Aloft
Now sponsored by EDF Energy, the Eye promoted its champagne holiday package—guests who bought it could go around twice instead of the usual single rotation, trying a flight of champagne as they went—by cramming a capsule full of Santas for a photo op. That same year, a "4-D" movie about London, which visitors can watch in County Hall across the river path, was added to the standard ticket package. 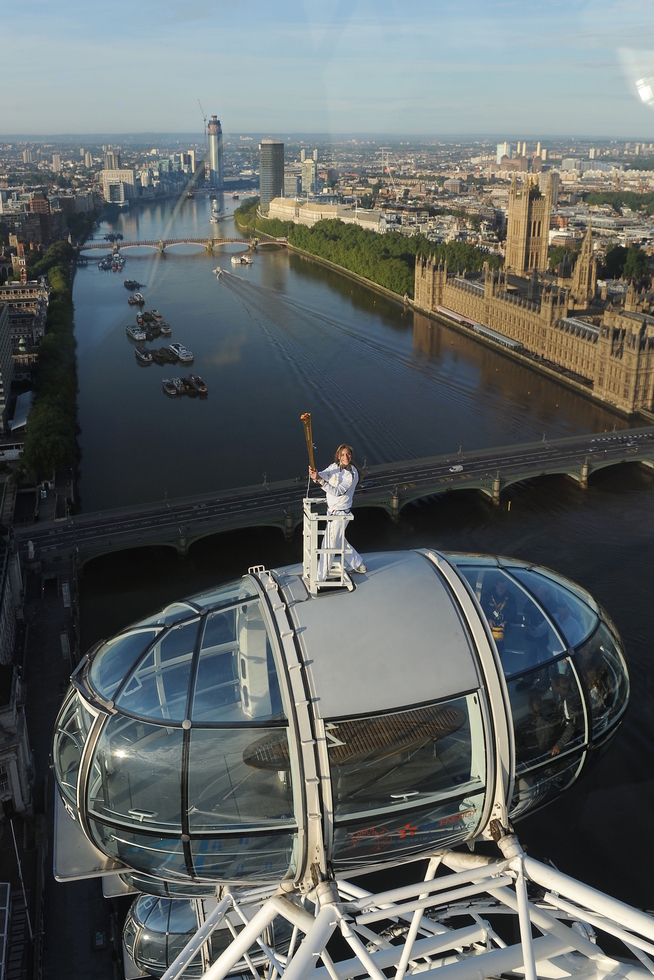 Coca-Cola London Eye
July 22, 2012: The Olympic Torch
Amelia Hempleman-Adams, 17, who the year before became the youngest person to ski to the South Pole, was handed the honor of carrying the Olympic Torch for the Summer Games as it made its way through London to the stadium near Stratford. She climbed atop a capsule for her ride at 8am on an otherwise quiet Sunday morning. 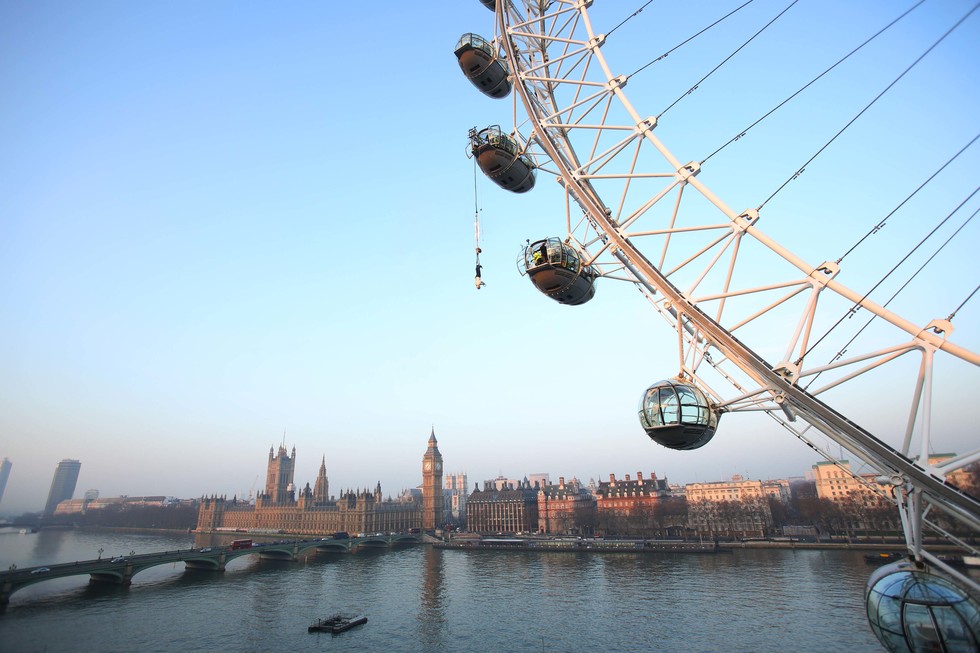 Coca-Cola London Eye
March 5, 2013: Escapology
For a TV show, stuntman Jonathan Goodwin, 32, was bound in a straightjacket and suspended 200 feet up from a pod—and then the rope was lit on fire. 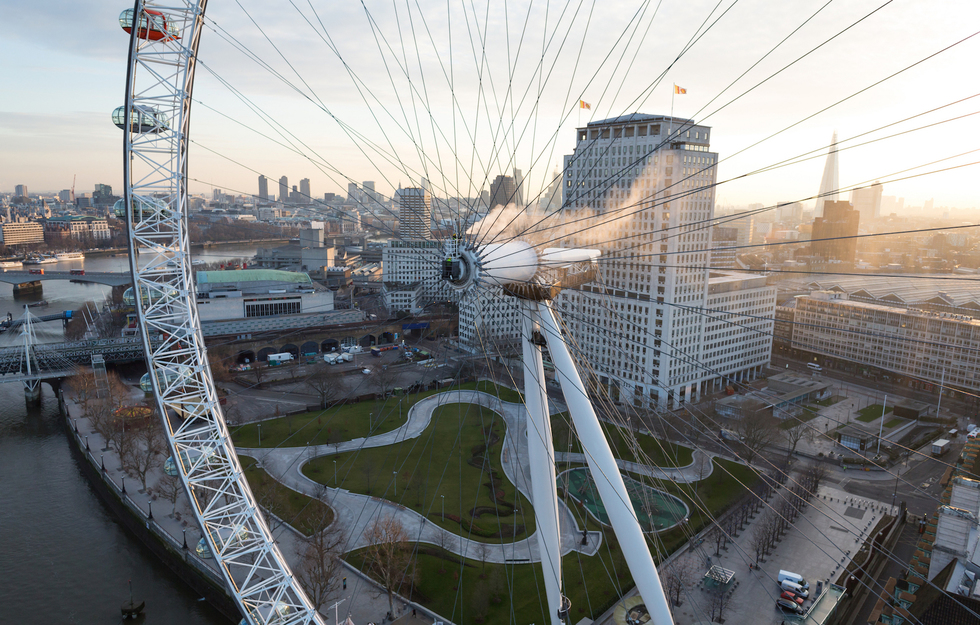 Coca-Cola London Eye
March 2013: A deep clean
Kärcher, a professional cleaning company that has also scrubbed Mount Rushmore and Rio de Janeiro's Christ the Redeemer, took three weeks to wash the London Eye for the first time since its construction. Here, they scale the hub to rinse it using a pressure washer. 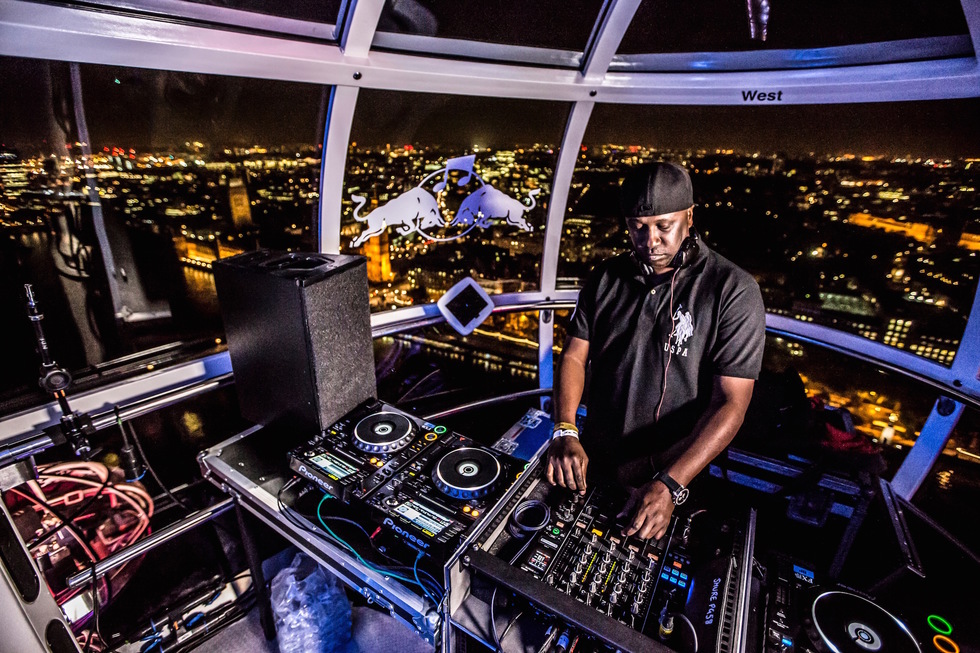 Coca-Cola London Eye
November 14, 2013: Red Bull Revolutions in Sound
For one night, each capsule was outfitted with a different D.J. (pictured: Todd Terry) or performer from U.K. club culture, and the music was sent out to the world online. 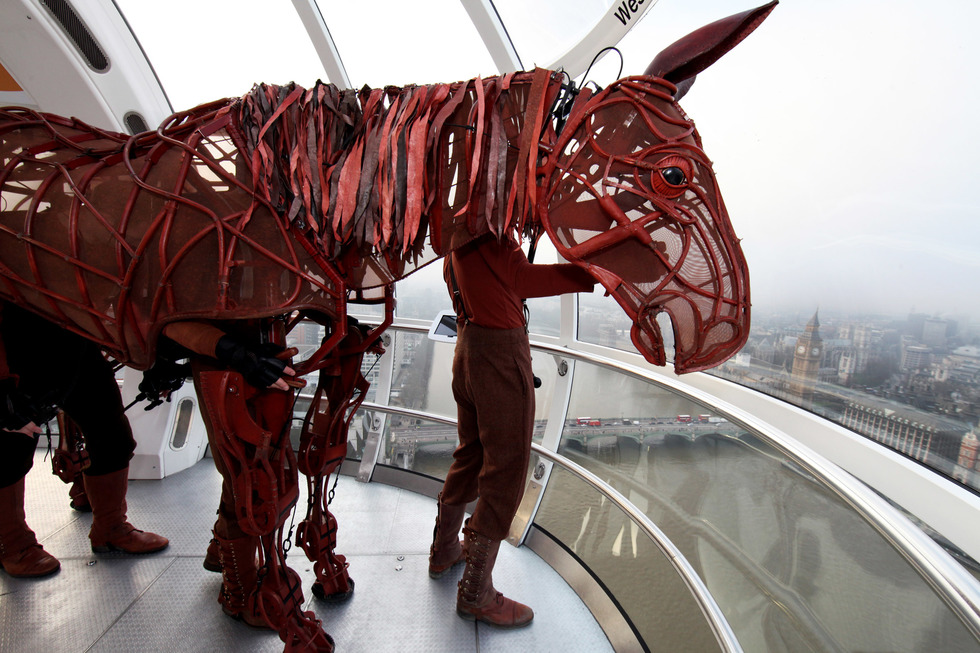 Coca-Cola London Eye
January 2014: War Horse on the Eye
To promote its 2,000th performance in the West End, War Horse sent one of its "Joey" puppets on a spin, with TV news cameras in tow. The show began a few hundred yards down South Bank at the National Theatre, and a portion of the rent paid by the London Eye to remain on the river goes to the nearby arts complex the Southbank Centre. 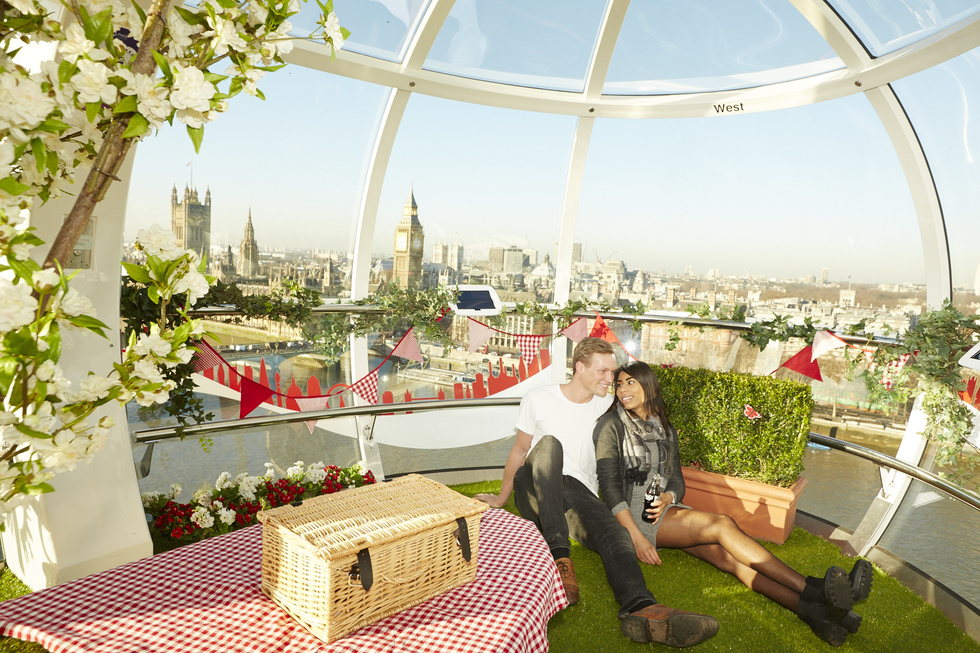 Coca-Cola London Eye
January 2015: Coca-Cola Takes Over
The London Eye is managed by Merlin Entertainments (the company behind Legoland, Madame Tussauds, and SeaLife Aquarium), but every few years it is re-stickered with sponsorship from a major company. To promote its branding of the Eye, Coca-Cola outfitted a capsule with a picnic, and at night, it doused the Eye in red lights. 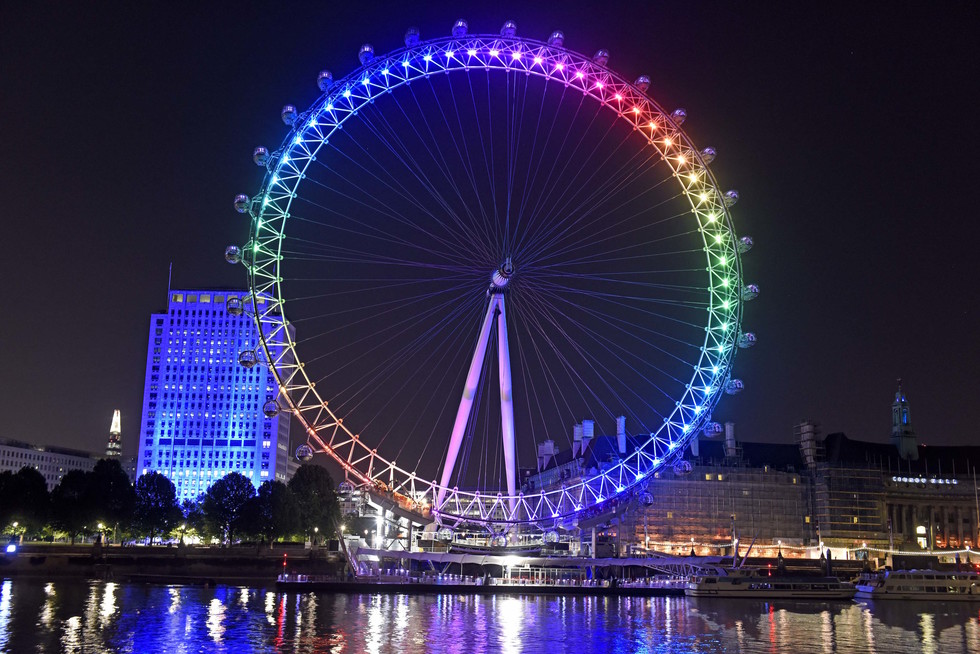 Coca-Cola London Eye
Annually: London Pride
The Eye is routinely lavished with a new livery in light for major holidays. Here's how it looks in June during London Pride. 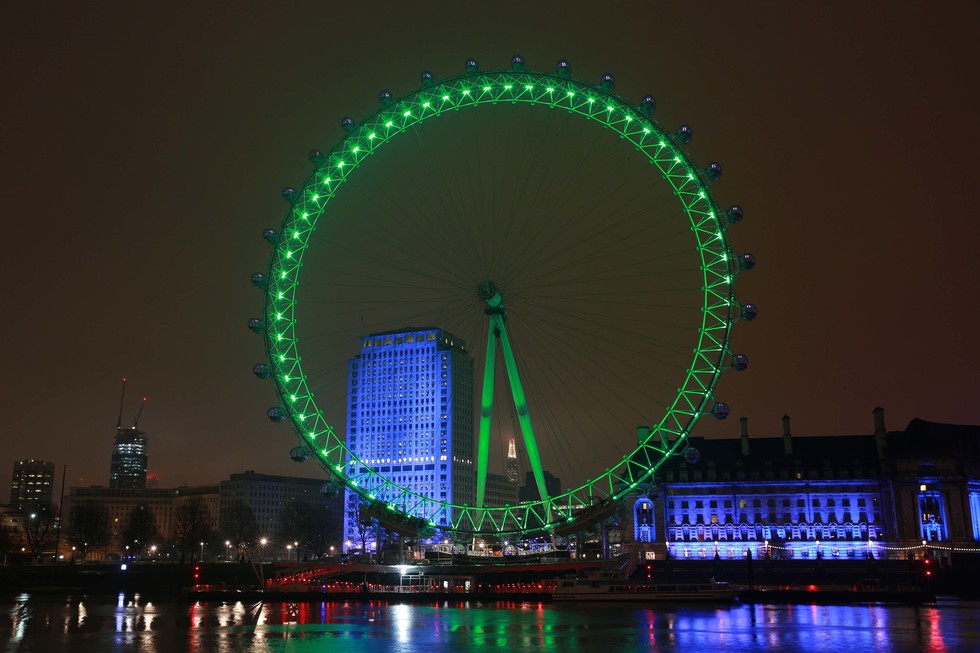 Coca-Cola London Eye
Annually: St. Patrick's Day
And on St. Patrick's Day, it's illuminated in emerald green, ignoring for at least a night the centuries-long tension of Anglo-Irish relations. 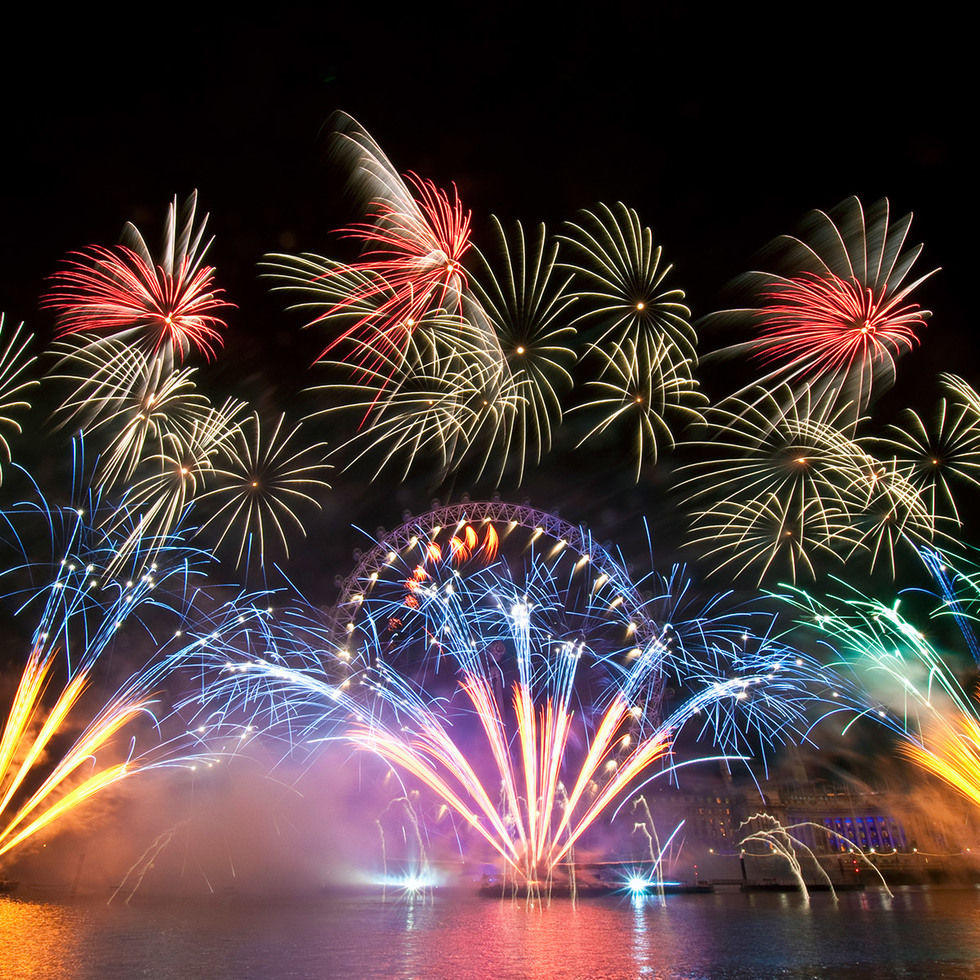 Coca-Cola London Eye
Annually: New Year's Eve
But the London Eye shines brightest each year on its birthday. By 2014, half a million people were cramming the banks to watch the show, forcing the city to control crowds by issuing tickets for the first day of 2015. Now, to get near the Eye on the turn of the year, you have to apply to the City of London in early fall.
Arts and Culture
Photography