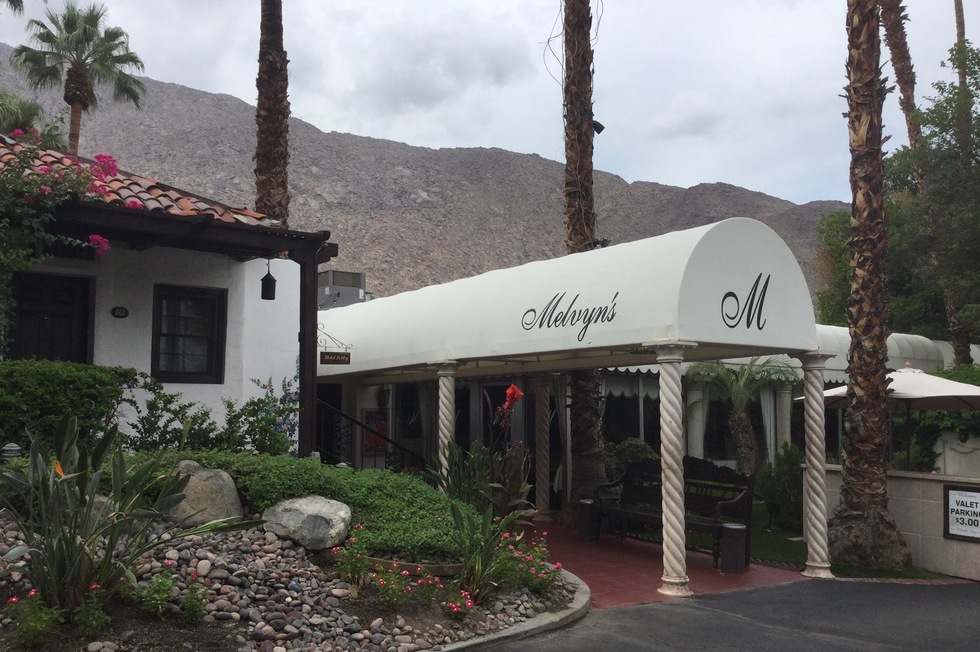 Frank Sinatra's Palm Springs: A Tour of His Hangouts

By Jason Cochran
He sang about Chicago and New York, but Frank Sinatra, who would have turned 100 in 2015, usually did it his way at his California home, Palm Springs. You can still visit the places Ol' Blue Eyes ate (like Melvyn's, pictured), drank (a lot), and slept—and pay respects at his final resting place. 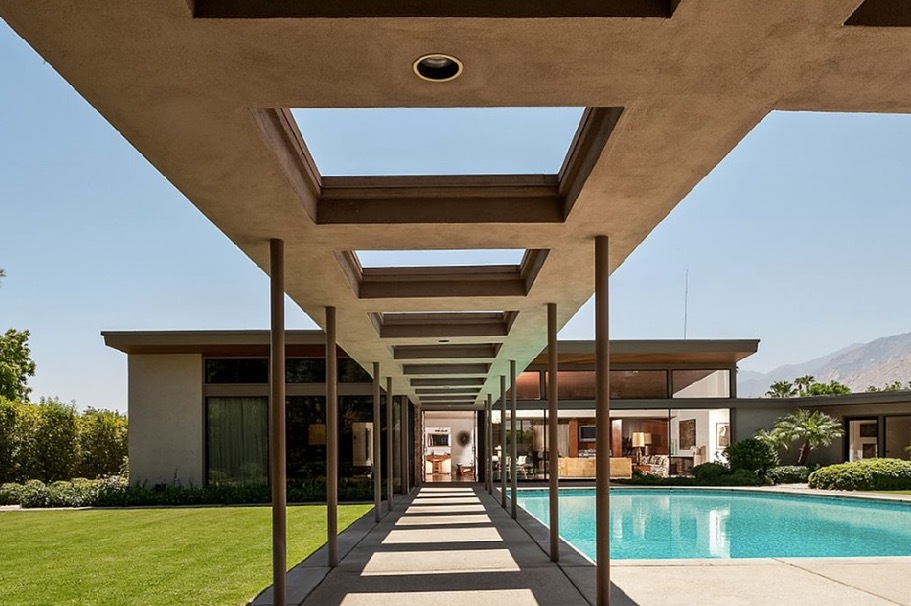 SinatraHouse.com
1148 East Alejo Road: Twin Palms
Frank commissioned midcentury architect E. Stewart Williams to craft a desert home, which was his primary residence between 1948 and 1957. Frank originally wanted a Georgian-style mansion, but Williams convinced him to go a different way—and the California Desert style took off. The current owners have kept it in top shape and added udpated conveniences, and it rents to vacationers for $2,600 a night. For that, you get four bedrooms, 6.5 bathrooms, a piano-shaped pool, and Sinatra's original sound and recording system, which is still in place. If you can't afford to rent it for yourself, groups of 20 can arrange to take a guided tour. 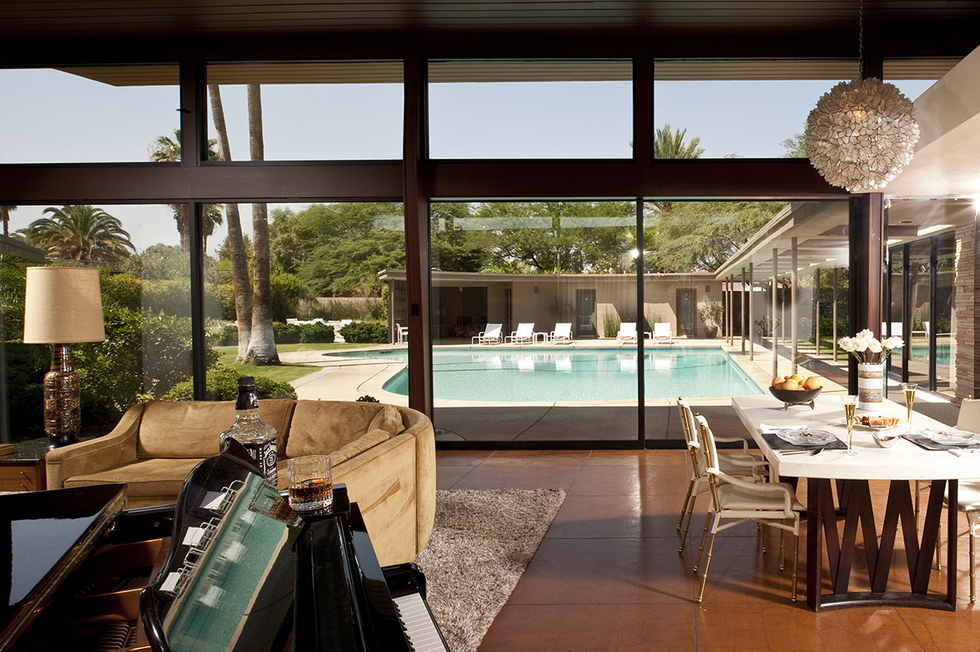 SinatraHouse.com
1148 East Alejo Road: Twin Palms
It's said Frank planted a flagpole between the two palms of Twin Palms, and he would raise a flag to let his guests know it was cocktail hour. He had a special Jack Daniel's banner made to announce his favorite drink, which he helped popularize. Sales of the whiskey doubled in 1955 after Sinatra began referring to it as "the nectar of the gods"—and of course Twin Palms has a well-used wet bar featured prominently in the living room. In the master suite bathroom, a chip in the sink put there, legend goes, by a flying bottle of champagne that was hurled during one of Frank and Ava Gardner's many battles. (Yeah, right, drink another one.) Still, Ava later recalled, "“It was the site of probably the most spectacular fight of our young married life, and, honey, don’t think I don’t know that’s really saying something..." 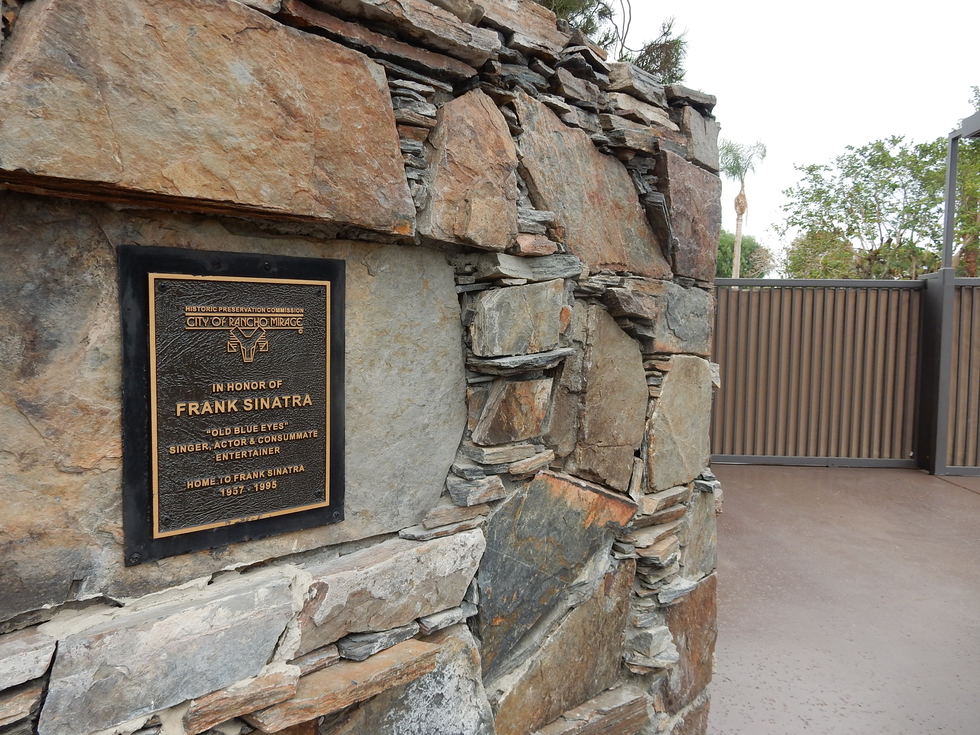 Jason Cochran
70588 Frank Sinatra Drive, Rancho Mirage: The Compound
In 1957, Frank left Twin Palms and traded up to a much larger compound in the town of Rancho Mirage, a 15-minute drive west of downtown Palm Springs. There's a plaque in the driveway to honor him—be careful, because the street is busy and there's not space to pull over. The walled property sits along the 17th fairway of the Tamarisk Country Club. Here, the guest quarters are as large as Twin Palms alone, and the main house is some 8,000 square feet. Each guest bungalow was built with both "his" and "her" bathrooms. In 1995, the compound was purchased by multi-billionaire Jim Pattison, who owns the Ripley's Believe It Or Not! attractions, among other things. He has kept it largely the way Frank had it, including retaining his huge collection of toy trains, but tourists may not enter. 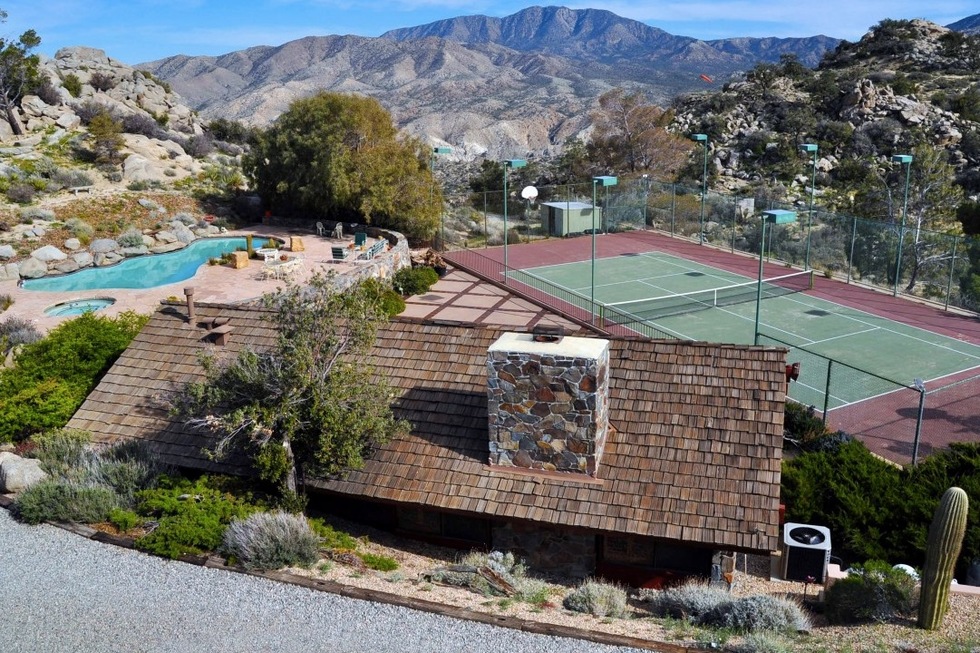 VillaMaggio.com
70300 San Lorenzo Road, Mountain Center: Villa Maggio
Frank commissioned architect Ross Patton to built a 7.5-acre mountain escape near Pinyon Crest expressly for private entertaining—eight bedrooms, nine bathrooms, a guest house that doubles as a studio, and views you can't believe. He named it after the character that won him an Oscar in From Here to Eternity, Pvt. Angelo Maggio. After John F. Kennedy spent the night in 1960, Frank, a Democrat, installed a commemorative plaque, but after a return trip, when Kennedy dodged rumors of Frank's mob ties by staying with Bing Crosby instead, it's said Frank got so angry he became a Republican. Other guests included Princess Grace, Elizabeth Taylor, and Richard Burton. You can only reach it by a gated road or its private helipad. In 2014, it was selling for $4.4 million and was marked down to $3.95 by the summer of 2015. 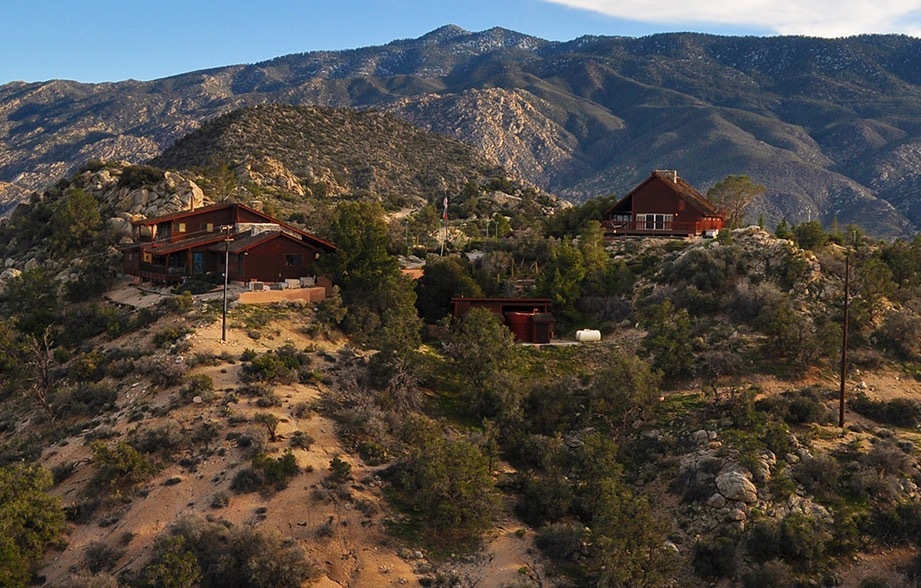 VillaMaggio.com
70300 San Lorenzo Road, Mountain Center: Villa Maggio
Even though Villa Maggio is off-limits to you, down in Palm Springs, several homes of the Rat Packers still stand and are visible on a driving tour, including Sammy Davis Jr.'s (at 444 Chino Road), Dean Martin’s mid-century modern Alexander house (at 1123 Via Monte Vista) and Peter Lawford, who lived so near Martin he could walk there without spilling his martini (1295 Via Monte Vista). 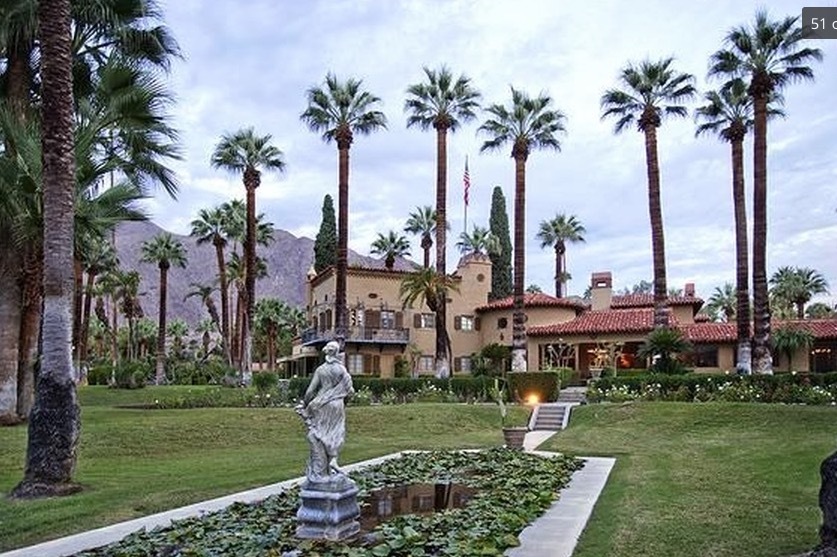 Zillow.com
457 Hermosa Place, Palm Springs: The martini incident
In 1958, actress and hoofer Ann Miller lived in this lavish 1928 Moorish mansion with a Texas oilman. Their four-acre spread in the Las Palmas neighborhood was dubbed "Villa Paradiso" by an envious Cary Grant, and at one party, it's said, Frank decked a barman for not knowing how to make an extra dry martini. (As you have learned, drunken misbehavior is something of a theme of any Sinatra tour.) Even if that story is apocryphal, the mansion is a lush example of desert luxury that once attracted Hollywood types to the Coachella Valley. 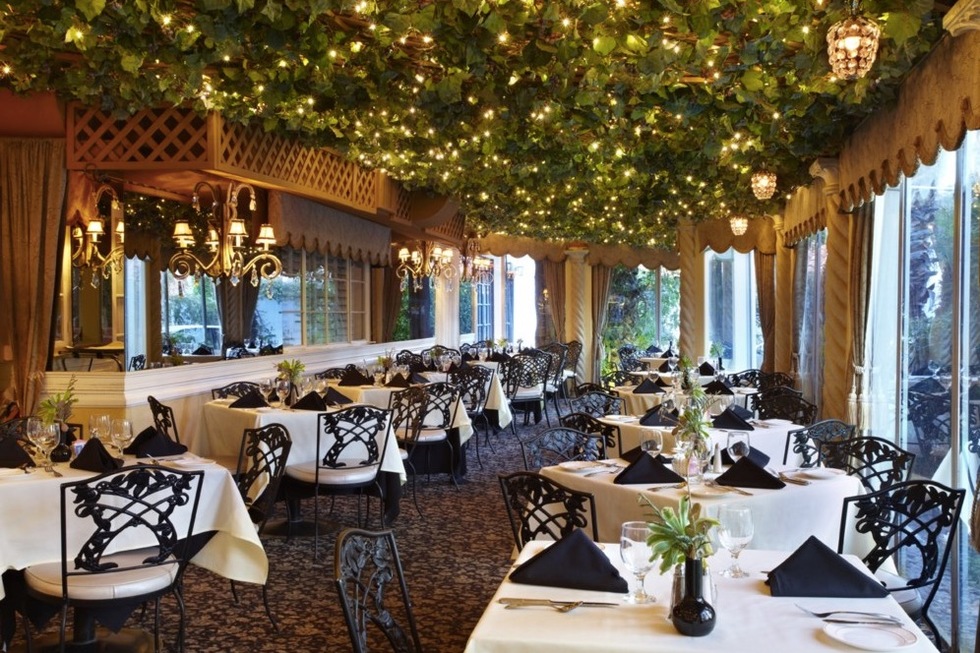 Melvyn's Restaurant
200 W. Ramon Road, Palm Springs: Melvyn's Restaurant
Brian Ellis, then and now the maître d’ at Melvyn’s Restaurant, told the Los Angeles Times: "When Mr. Sinatra came into the dining room, everything stopped. Silence came over this room." Frank chose Melvyn's, the restaurant at the Ingleside Inn, as the location for his pre-wedding party to Barbara, and he was a regular. Little seems to have changed since then—not even the waiters, many of whom have worked here for decades. The patio room with a faux-leaf draped ceiling is still a select spot for a Palm Springs luncheon. Although he could often be found glued to the bar, his corner table is still there, and you can still order pepper steak prepared tableside, as he did. John Travolta still loves this place. 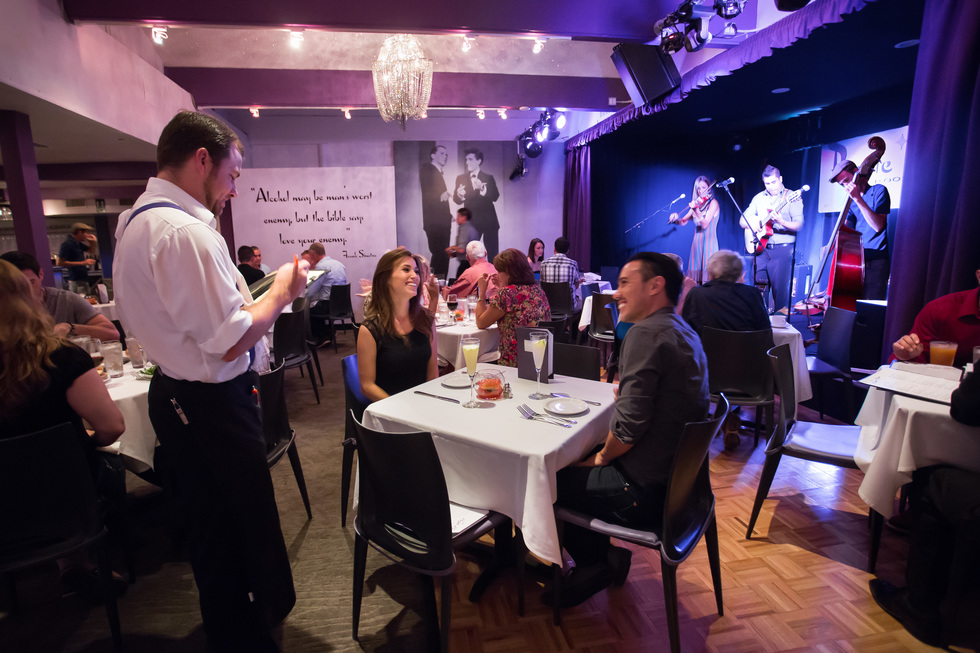 The Purple Room
1900 East Palm Canyon Drive in Palm Springs: The Purple Room
Many of the old Rat Pack hangouts have gone, including Don the Beachcomber, Sorrentino’s, and Ruby’s Dunes, but The Purple Room at Club Trinidad, built in 1960, is still around, undergoing a revitalization in 2014. The motel to which it's attached it less than fresh, but inside, the Purple Room is once again a cool place to sip a vintage cocktail—lots of brown liquor, strong enough to make your liver cry—or slip into a booth for a supper-club evening. The Purple Room's co-owner, Tony Marchese, says Frank got engaged to Barbara here, and Frank was known to regularly turn up to drink and hear musicians. Even now, the singers still croon the songs that made Frank and his brood big. 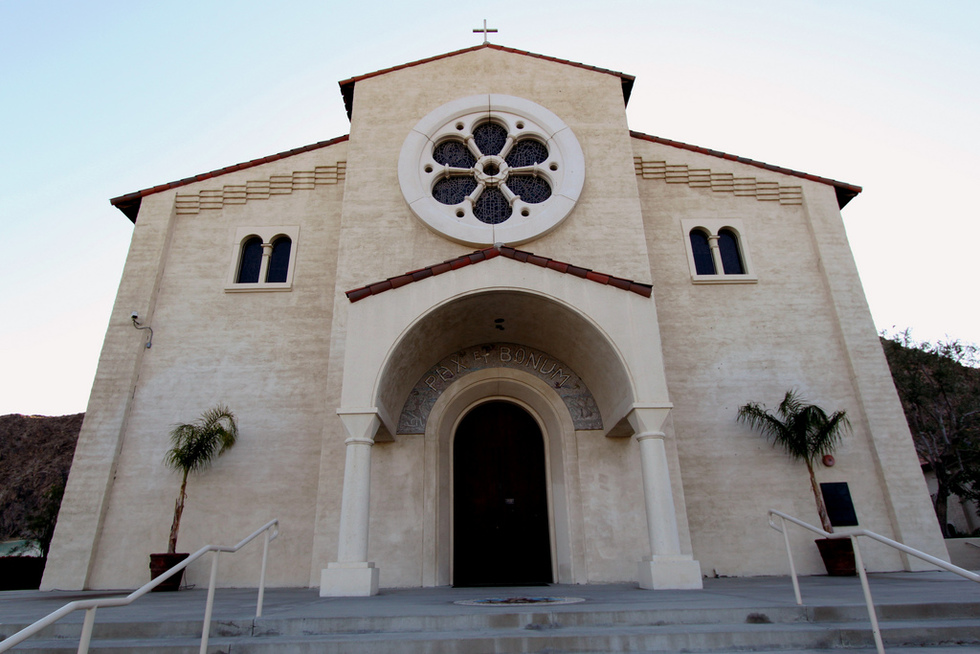 PraytinoPhotography/Flickr
47225 Washington St., La Quinta: St. Francis of Assisi Church
Frank worshipped (allegedly) here, in the town of La Quinta, 25 minutes east of Palm Springs near the legendary resort of the same name. It was designed by the famous Italian director Franco Zeffirelli. Frank Capra, who wrote nearly all his movies at the resort, also attended. Frank's daughter Nancy got married at St. Louis Catholic Church (68633 C St., Cathedral City), which thrived thanks to donations from Frank's mother Dolly. 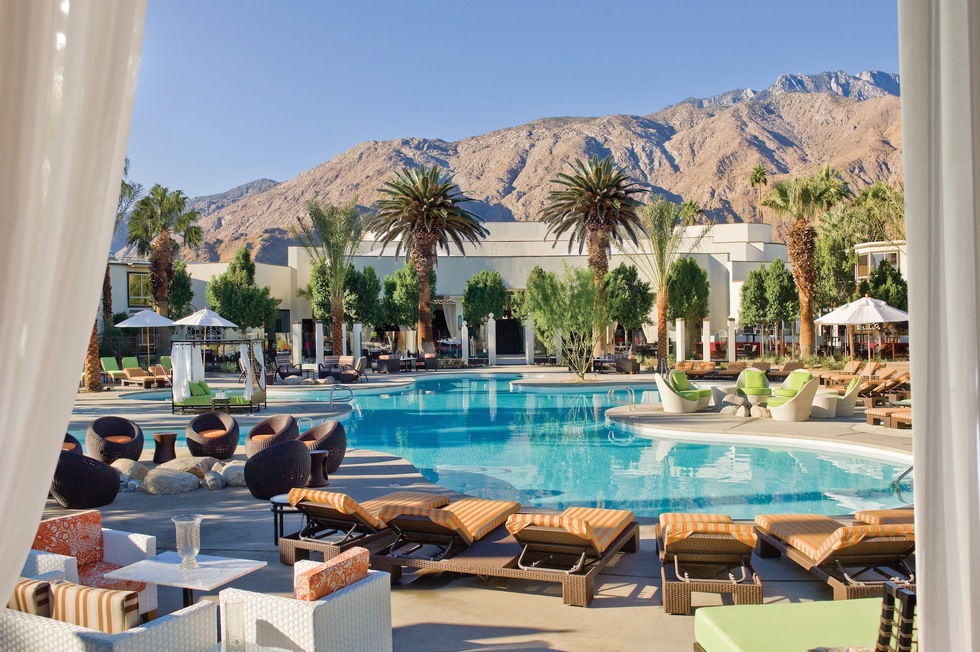 Riviera Palm Springs
1600 North Indian Canyon Drive, Palm Springs: Riviera Palm Springs
Frank sometimes performed in the ballroom (the original one; now there are two) of the still-operating Riviera, built in 1959 near downtown Palm Springs. Usually, his appearances were for benefits featuring some of his other show business pals, including Bing Crosby or Jerry Lewis. 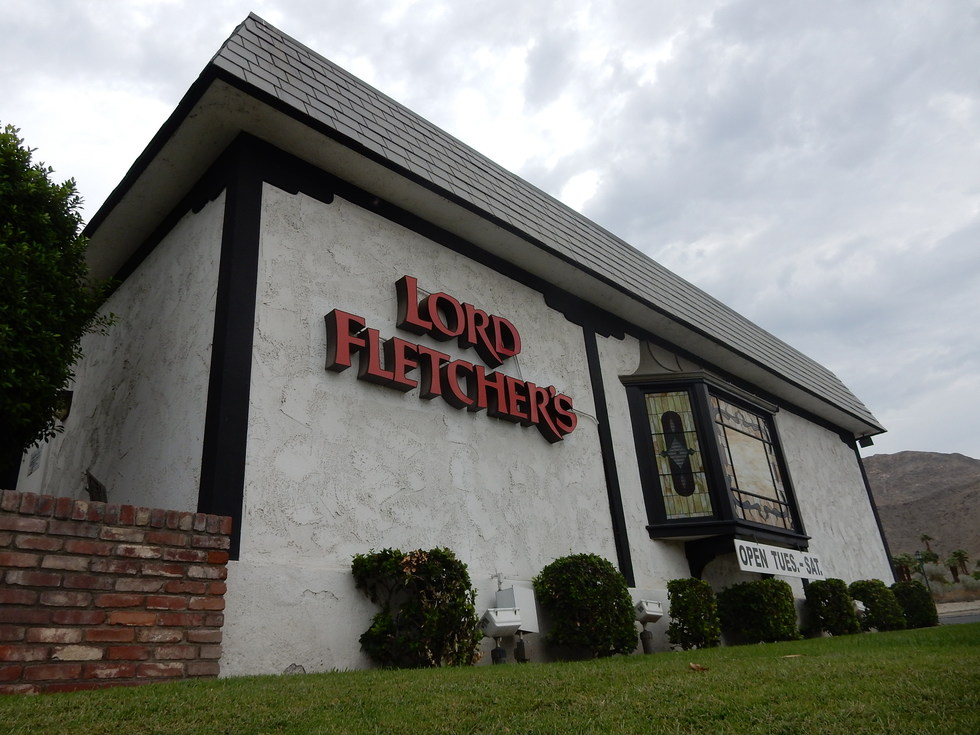 Jason Cochran
70385 Highway 111, Rancho Mirage: Lord Fletcher's
In his later years, Frank drew pleasure from dining at Lord Fletcher's, an English-themed restaurant and pub. It was the location of his 70th birthday party. In one well-known story, Frank would secretly sprinkle $20 bills under the table to give the cleaning crew a pleasant surprise after he left. Then there was the time he brought astronaut Alan Shepard here and both wound up behind the bar belting "Fly Me to the Moon." It still serves his favorite dish: braised short ribs with red cabbage or pot roast with potato pancakes, with a dessert of English rice pudding. 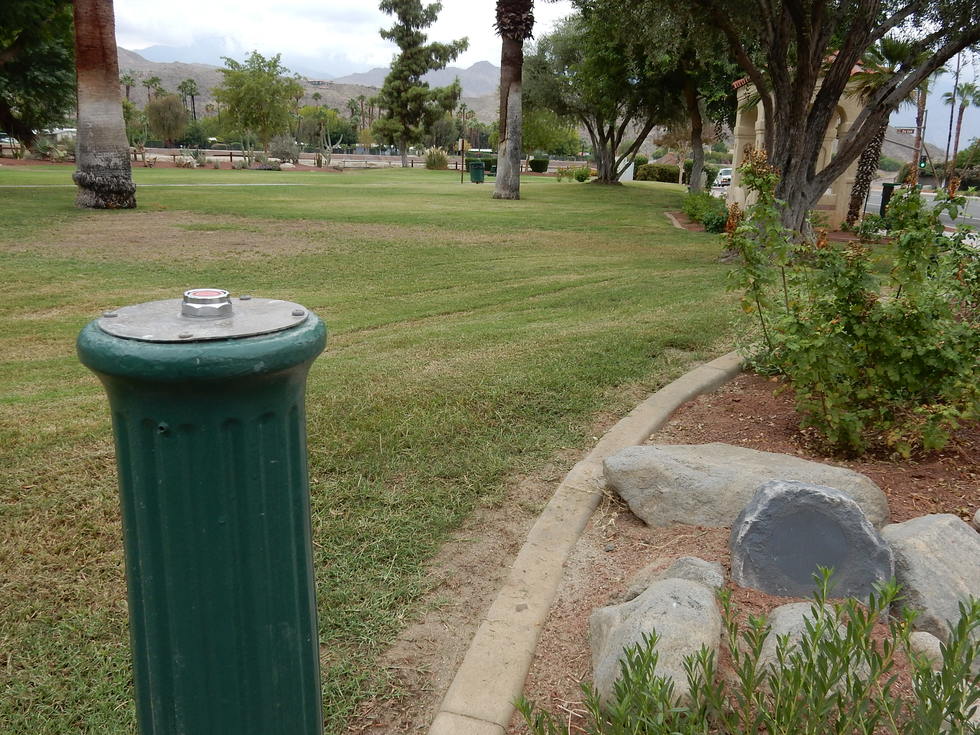 Jason Cochran
70001 Frank Sinatra Dr., Rancho Mirage: Michael S. Wolfson Park
You can still hear Ol' Blue Eyes if you press this button. But he's not singing: As a late-life gift to his local politico buddies, he recorded a 58-second welcome spiel to visitors of this otherwise unremarkable park. The information he delivers is strangely sheep-obsessed. After a few generic facts about the political career of Mr. Wolfson, he extolls the nearby Santa Rosa mountains, "Realm of the Bighorn Sheep" and then Bradley Peak, "home for the Bighorn Sheep during the lambing season... If only for a brief interlude may this park bring you peace and happiness. I thank you." The speaker is hidden in a fake rock. 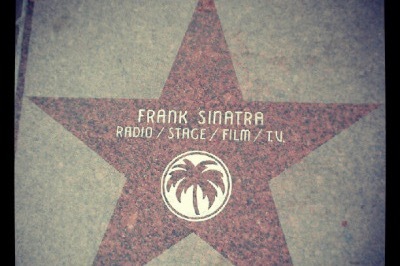 Palm Springs
123 N. Palm Canyon Dr.: The Walk of Stars
In 1994, four years before his death in West Hollywood, Frank was on hand to christen his entry on Palm Springs' version of the Walk of Fame, known here as the Walk of Stars. The Walk honors famous people with strong ties to the area. You'll find it (unless construction has moved it to a temporary safe location) near the heart of downtown. 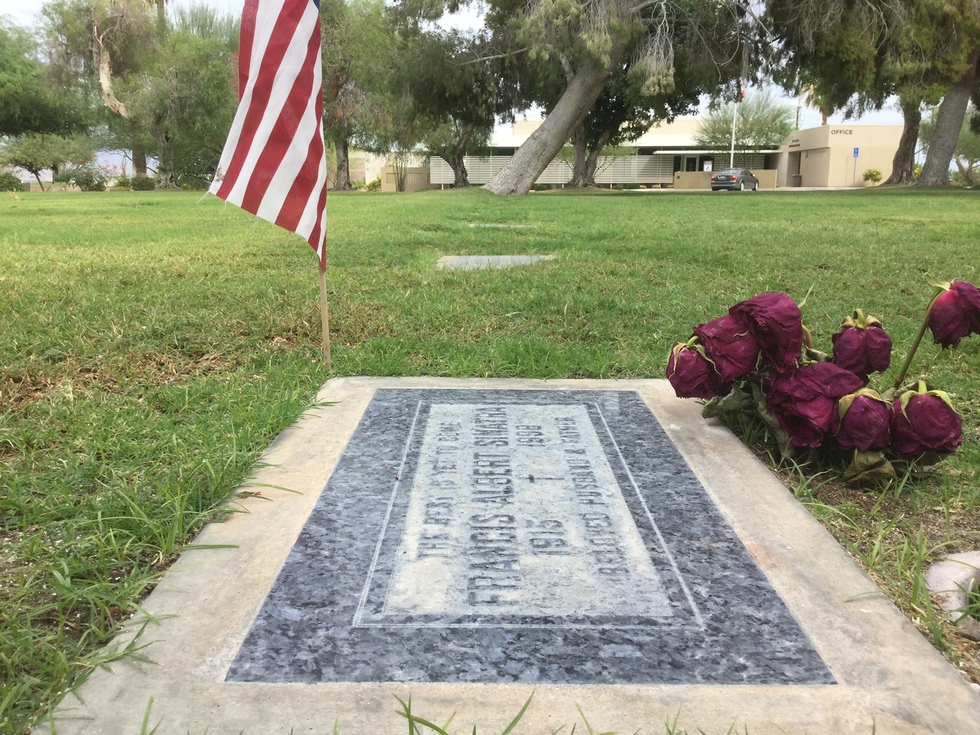 Jason Cochran
31705 DaVall Drive, Cathedral City: Desert Memorial Park
And in 1998, he faced his final curtain. Under a fading and surprisingly mundane headstone that reads, unconvincingly, "The Best Is Yet to Come," the wonder boy from Hoboken rests—reportedly with a flask of Jack Daniel's beside him. He looks like he's mostly alone here, but nearby you'll also find his prizefighter father Anthony Martin Sinatra, his brash and fascinating mother "Dolly" (look for Natalie Sinatra; she was killed flying to her son's opening night at Caesars Palace), his dear friend Jilly Rizzo, his uncle Vincent Mazzola, and the composer Jimmy Van Heusen, the co-writer of such Sinatra standards as "Come Fly With Me," "My Kind of Town," and "Love and Marriage." Hollywood director Busby Berkeley, Betty Hutton, and Sonny Bono are also here. You'll find Frank a little north of the marker for Section B-8, not far from a tree. There are often dimes or bottles of Jack on his grave—tributes from fans for a larger-than-life icon of American culture.