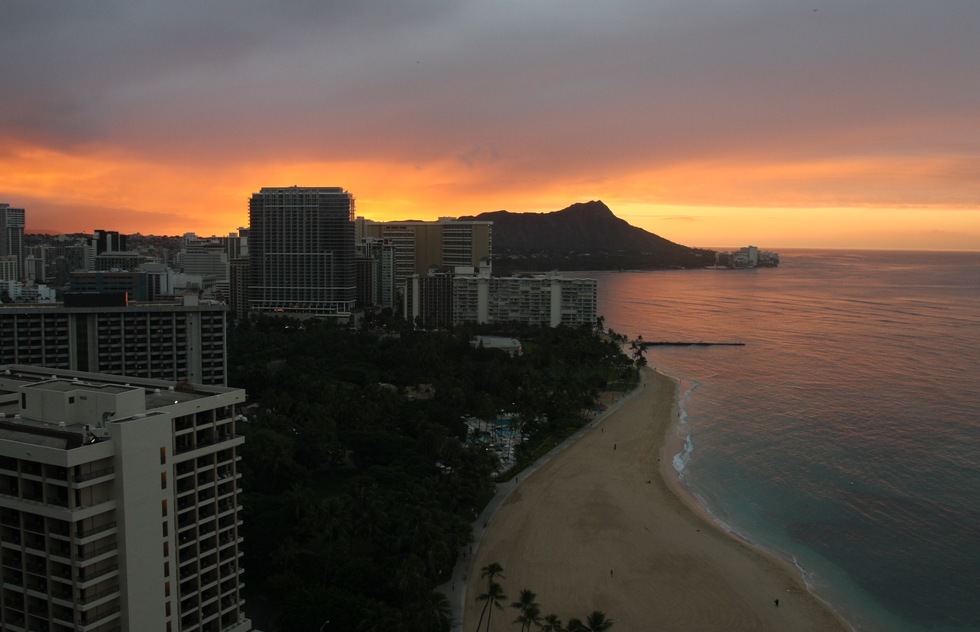 By Jason Cochran
It beckons to everyone on Waikiki Beach: Diamond Head. It's hard to look at this regal remnant of a volcanic crater and not feel the urge to stand on top of it, soaking in the view of Oahu and the Pacific Ocean below you. Fortunately, climbing Diamond Head (seen here at sunrise, the best time to do it) is easier than you might think. We took pictures along every step of the way to the viewpoint so that you'd know how to hike the Diamond Head Summit Trail and whether it's an activity for you.

Important: As of spring 2022, all out-of-state visitors to Hawaii must make a reservation to visit Diamond Head State Monument. Reservations are free (although entry for non-Hawaiiians is $5) and are available 14 days ahead via the state's website. 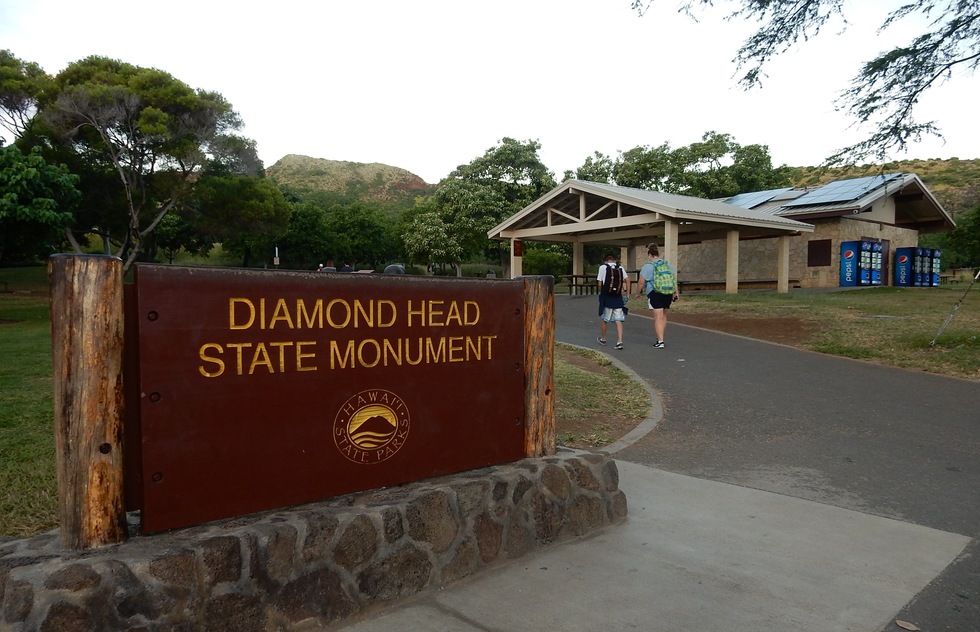 Jason Cochran
Trailhead, Diamond Head Summit Trail
Most people begin their hikes by driving through a tunnel that goes inside the crater. It costs $5 for a single-entry vehicle ticket to the parking lot (or $1 to walk in). One of the best times to climb Diamond Head is for sunrise, when temperatures are still relatively cool and the sun shines from behind your back on the crescent of Waikiki Beach far below. For good reason, that's also one of the busiest times of day—the trails fill up with coach tourists.

GPS systems recognize Diamond Head State Monument, but if you don't have one, you can enter the park at Diamond Head Road at 18th Avenue. The park is open from 6am to 6pm, seven days a week. The last entry to the trail is 4:30pm. 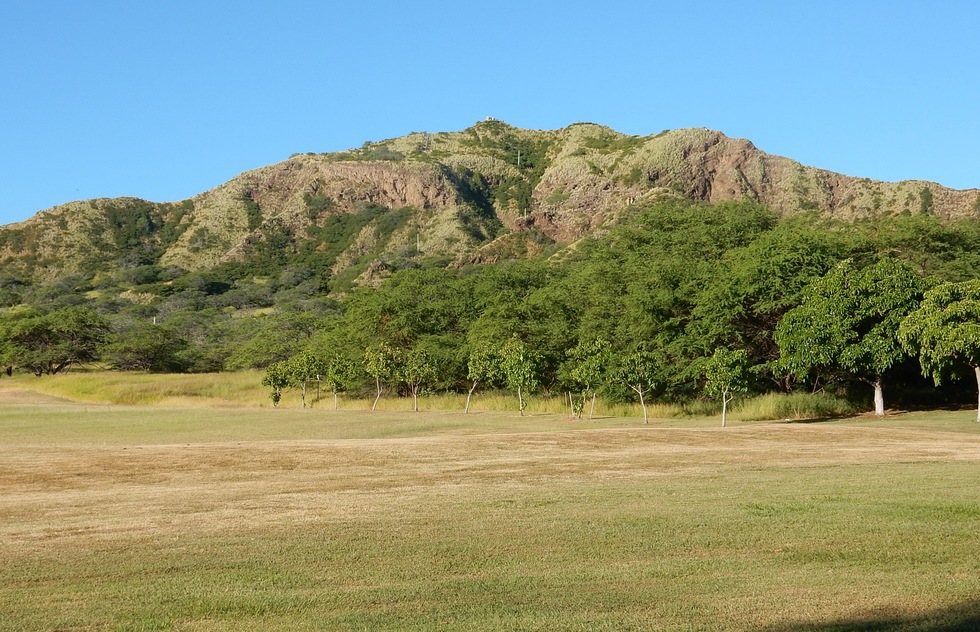 Jason Cochran
From the crater
That famous summit doesn't look so special from the parking lot area in the crater. This view also gives a much more realistic view of the difficulty level. From here, you'll go 0.8 mile (1.3km) and rise 560 feet (171m). This hike, which is more like a walk with stairs, will only take a person in fair physical condition 30 to 45 minutes each way.

You'll want to bring water, not so much because of intense exertion but because Hawaii humdity can make you sweat and there's not much breeze to cool you until you reach the lip of the crater. 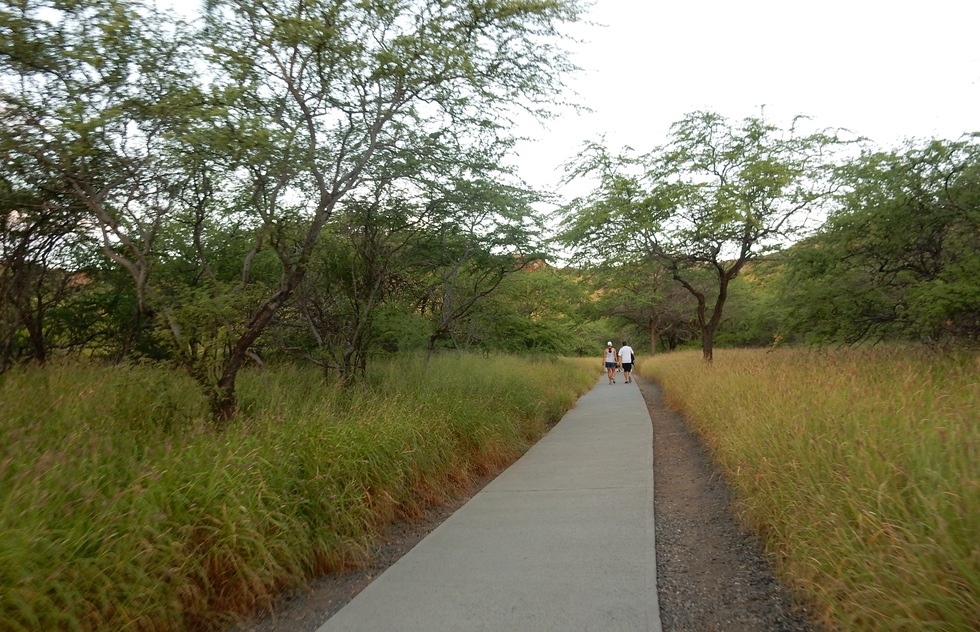 Jason Cochran
Crater floor
The 0.2 miles along the crater floor are an easy and evenly paved walk to the craggy part of the crater wall. 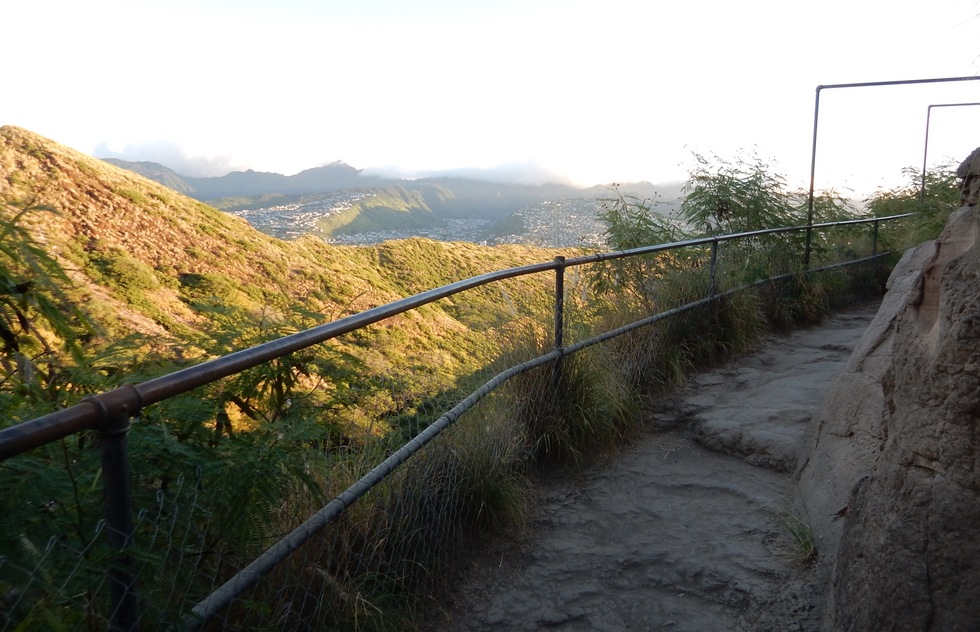 Jason Cochran
Typical path
As you gain elevation, the path isn't paved and is usually uneven but sturdy, like this—so you can see why flip-flops aren't the best footwear choice for Diamond Head Summit Trail. The dropoffs are well-railed. 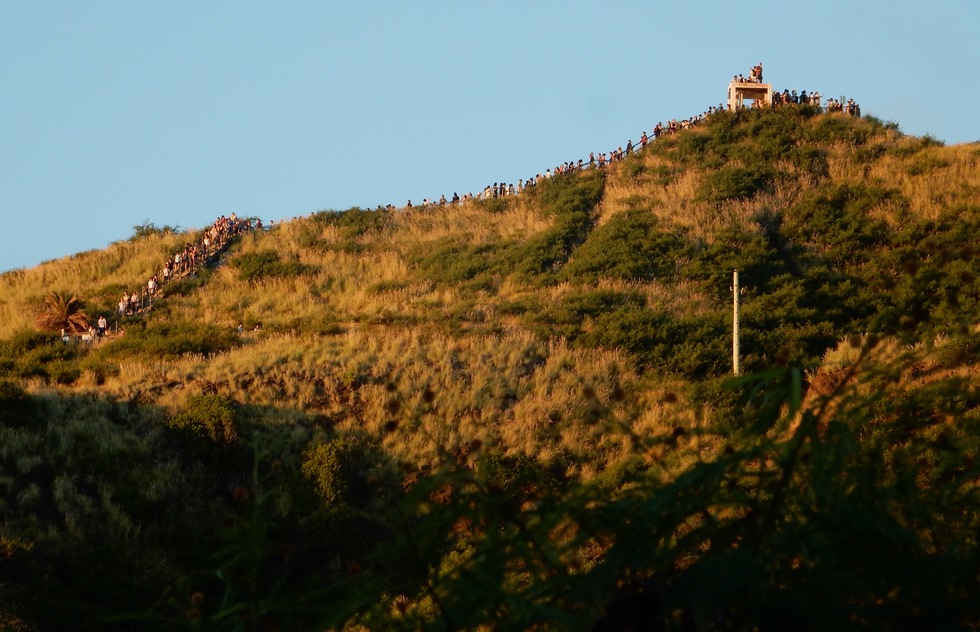 Jason Cochran
Sunrise crowd
Don't expect a solitary wander through the silence of nature's glory. More than 3,000 visitors come here a day, and the throng is thickest, by far, at sunrise. These tourists, many of whom flew in from Japan, are lining the walkway to take pictures of the gold-orange dawn. They climbed in the half-light and will go down as the sunshine starts to heat up. Don't be dismayed—most of them will be gone within minutes. 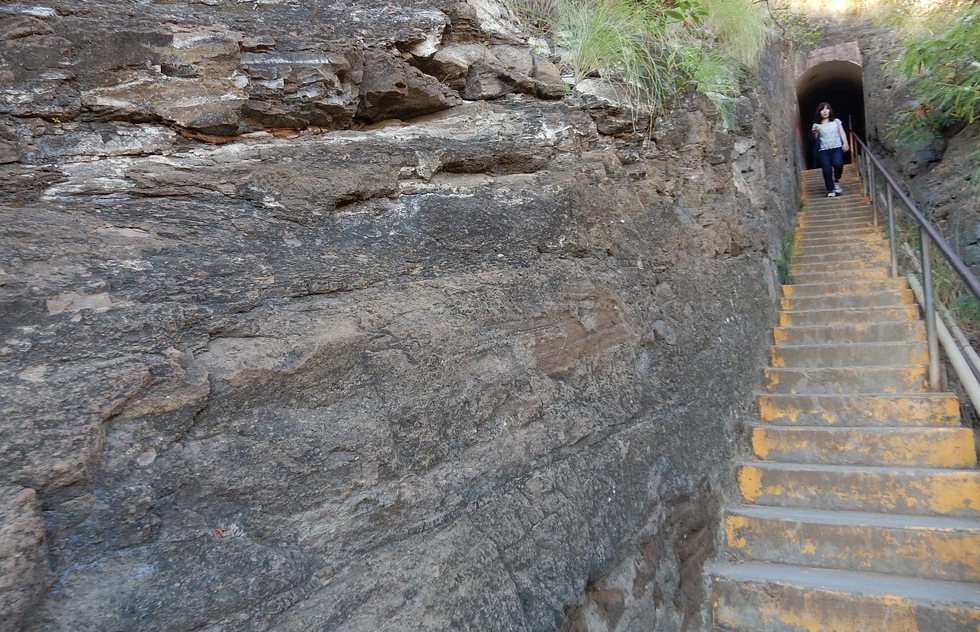 Jason Cochran
First staircase
Diamond Head was used by the military, and you'll be using infrastructure it installed. Things get steeper for the last 1/10th of a mile. This is the first staircase you'll encounter: 74 steps culminating in a tunnel. 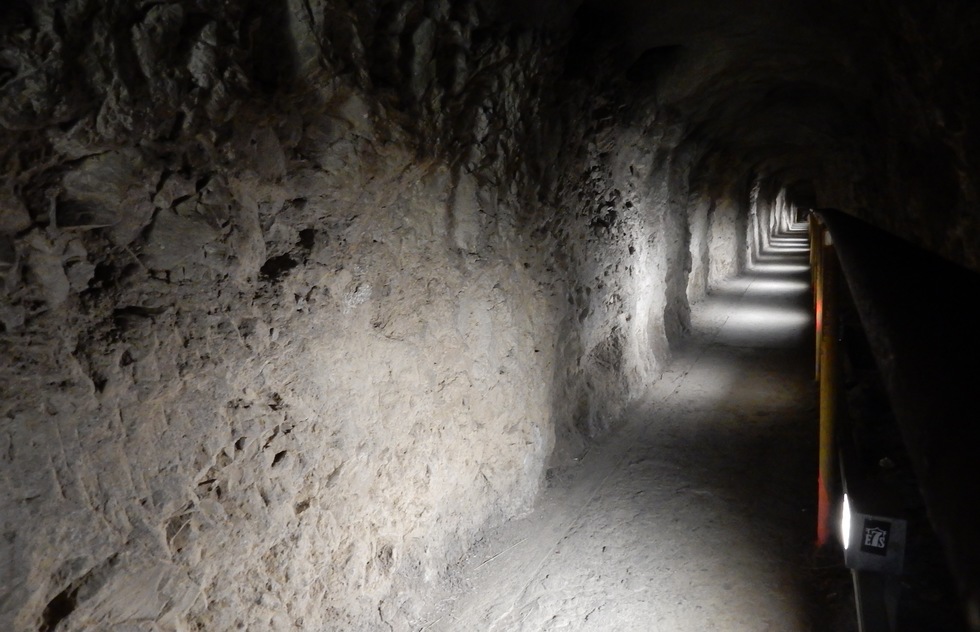 Jason Cochran
Tunnel
Everyone has to go through this tunnel to reach the summit. It's 225 feet long—it only appears as if it has no end because the final few yards are around a bend. As you can see, it's lighted. 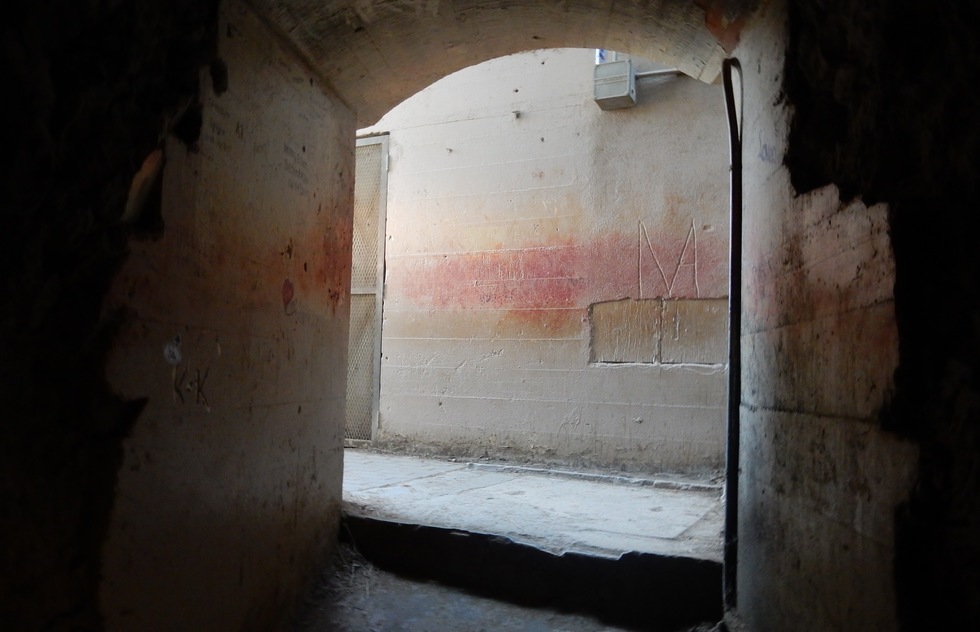 Jason Cochran
Fork in the path
At the end of the tunnel, you make a choice. Turn right and go up a 99-step staircase, then climb two stories inside the mountain on an old spiral staircase until you reach an observation platform embedded in the rock. (We'll show you what that looks like.) From there, climb a few more steps to the summit.

Turn left, and you'll be entirely outside and using a combination of sloped paths and shorter outdoor staircases to reach the same summit. 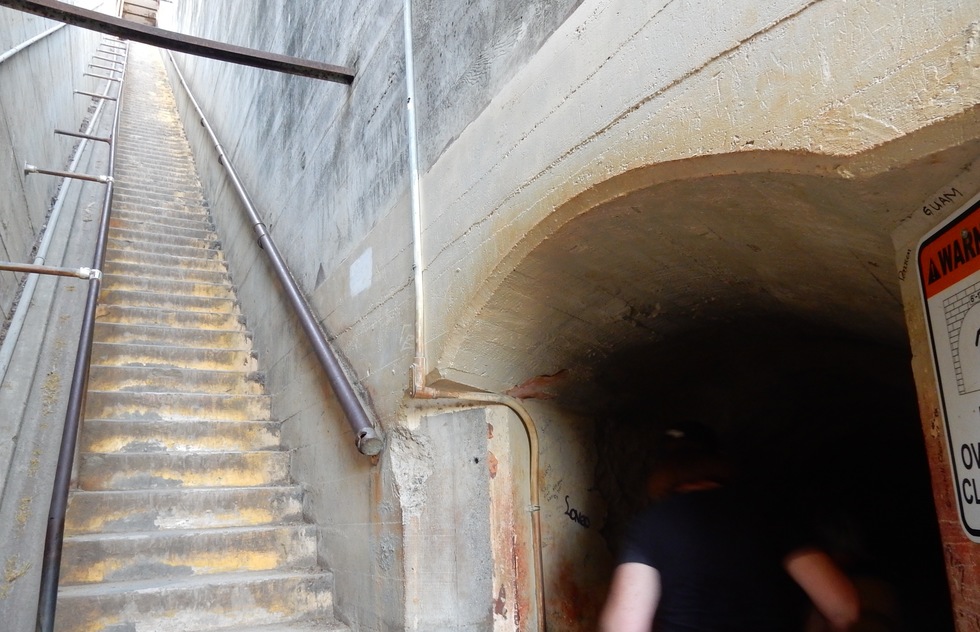 Jason Cochran
99 steps
Here's what you do if you turn right: a 99-step staircase. There are no landings, so make sure you're steady on your feet or grip the metal handrail. (There are lots of metal handrails, and your hands will smell of metal when you get back to your car—you might think of packing hand sanitizer.) 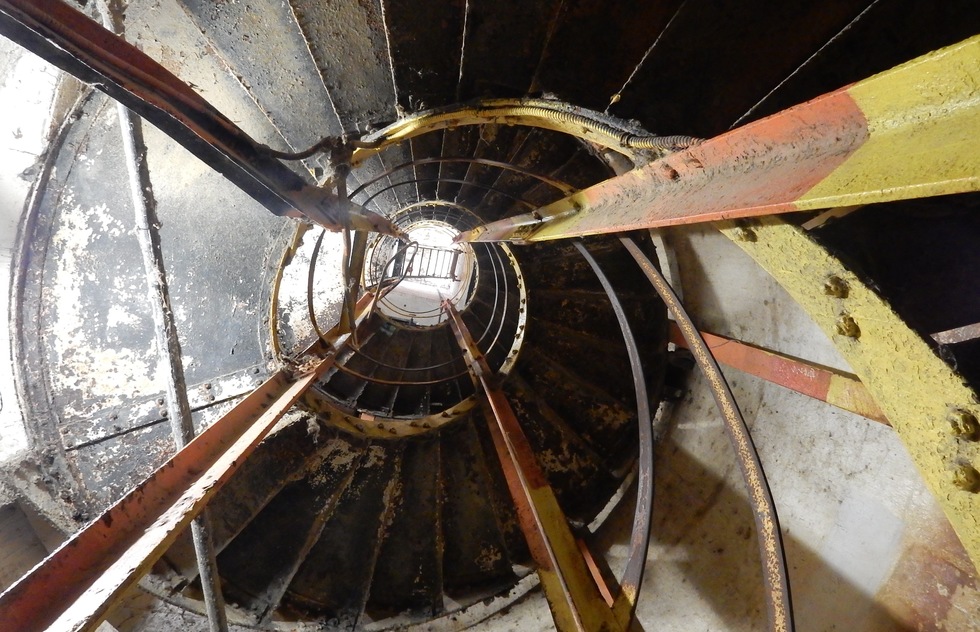 Jason Cochran
Spiral staircase
After that long staircase, you climb 52 lighted steps on this spiral staircase (it's taller than that, but access to the top is locked) to reach the turret-like, third-level fire control platform. It's rusty, so don't wear light-colored clothing if you can help it. 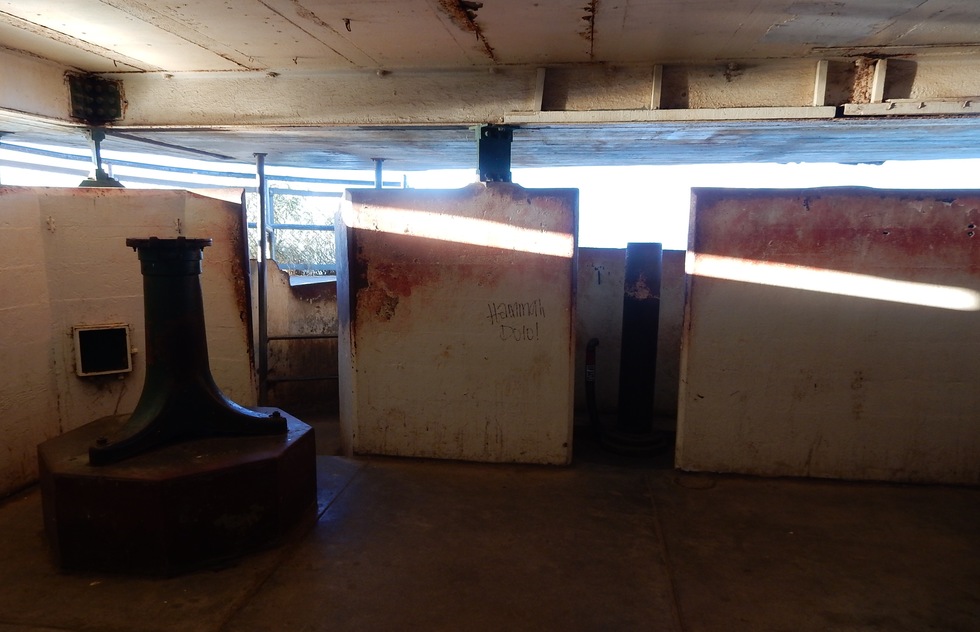 Jason Cochran
Fire control station
Here's that fire control platform you eventually reach if you turn right after the long tunnel. This station, which dates to 1908, was built to help triangulate artillery fire on enemy ships, although no one ever fired from the station in war. It's kind of spooky. There are spectacular views out of those slots, but squeeze out through that central narrow portal for access to the summit itself. 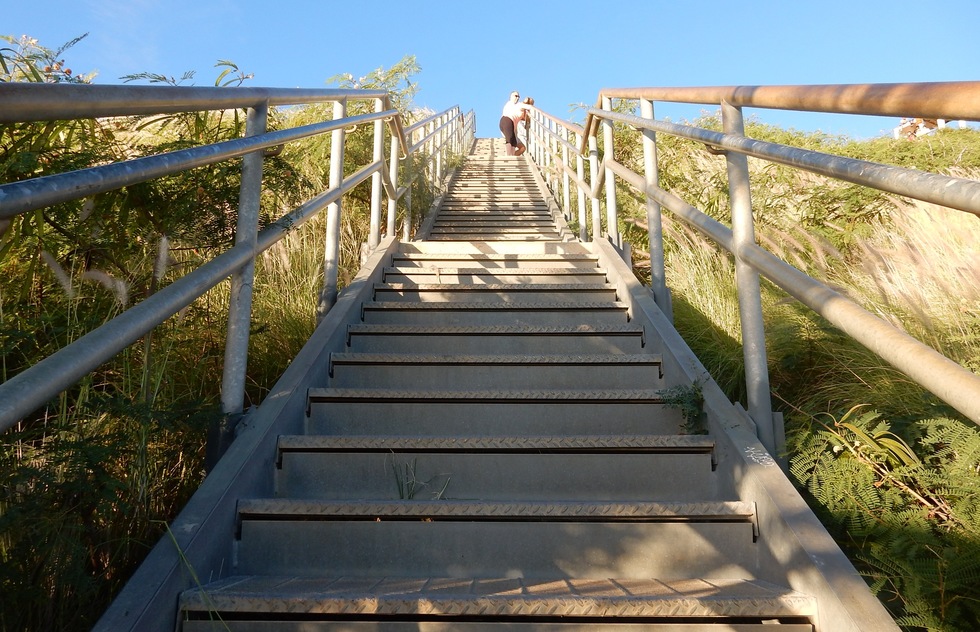 Jason Cochran
Final stairs
If you had turned left out of the tunnel, you'd be fully outdoors until you reached this new, 82-step metal staircase to the summit. It's shorter than the the stairs you'd take by turning right because on this fork, part of the pathway gains elevation along a slope instead.

Some people make a loop of the two tunnel choices: They ascend through the fire control station and descend this way—or the reverse. 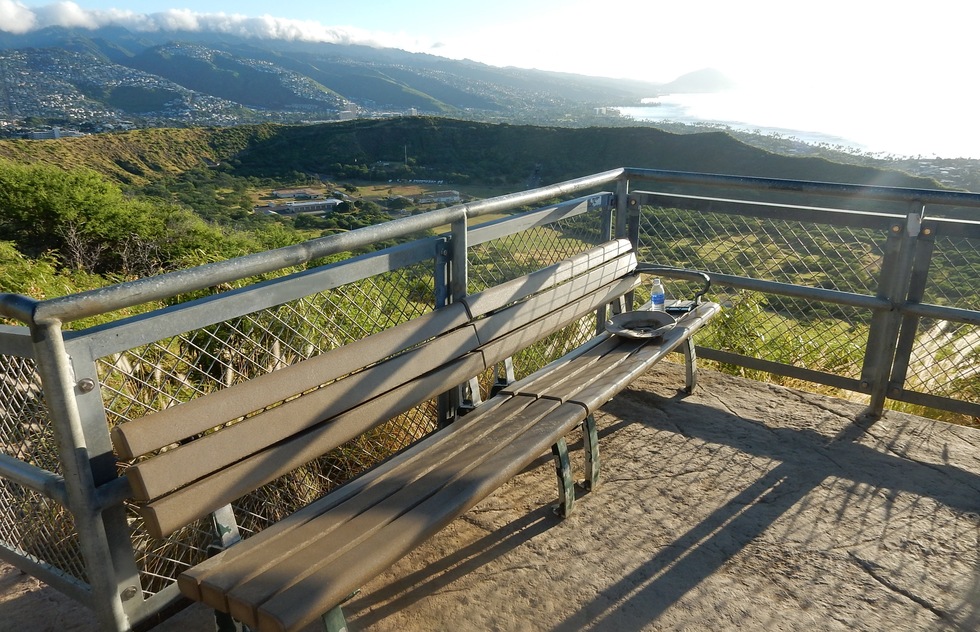 Jason Cochran
Benches
There are a few benches along the way. This one overlooks the crater. 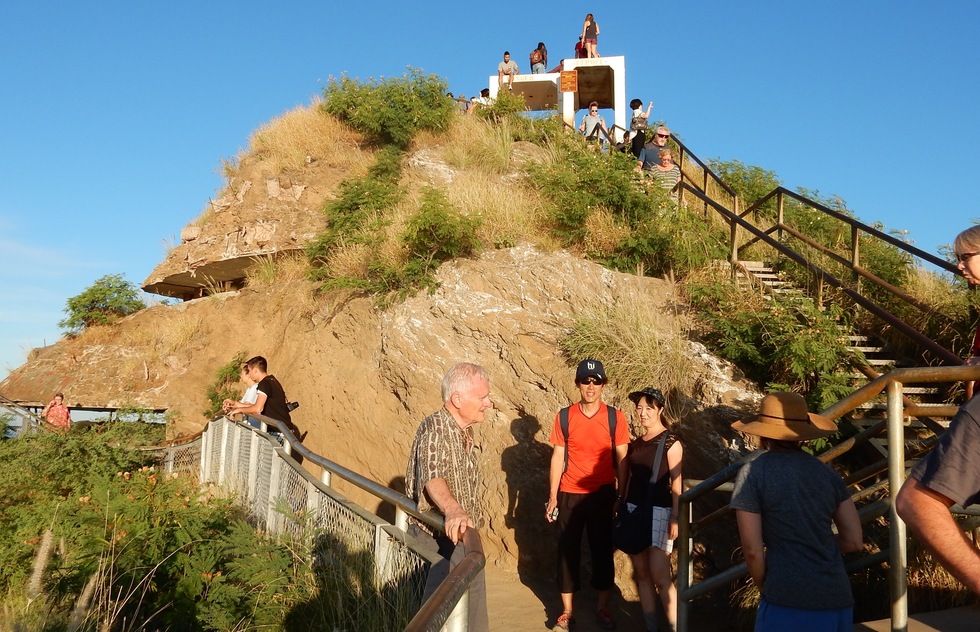 Jason Cochran
Summit
You made it. Here's the crowd slowly thinning out after the sunsrise rush. As you can see, people of all ages are able to complete the hike—the toughest part of which, to be honest, is really more of a walk on stairs. Be thankful for that—much of this had to be constructed using pack mules and until the 1970s, the summit was only reached by ladder. 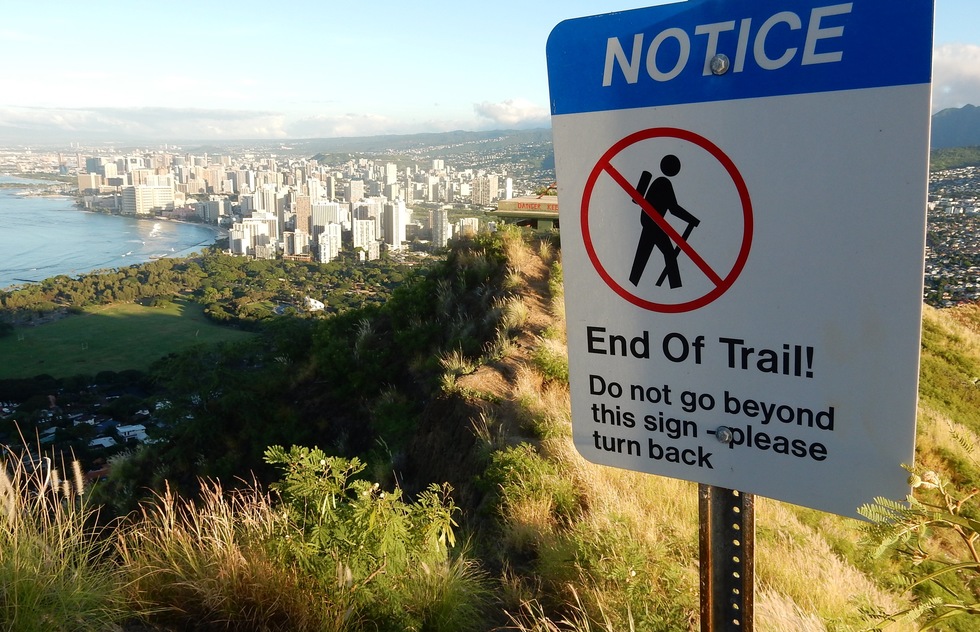 Jason Cochran
End of the trail
We won't spoil all the views for you here—it's much more exhilarating to see them in person. Rest assured they are 360-degree and they are spectacular.

Inevitably, some foolish tourists jump this fence and try walking further outside the safe zone. Given that dropoff, we wouldn't. 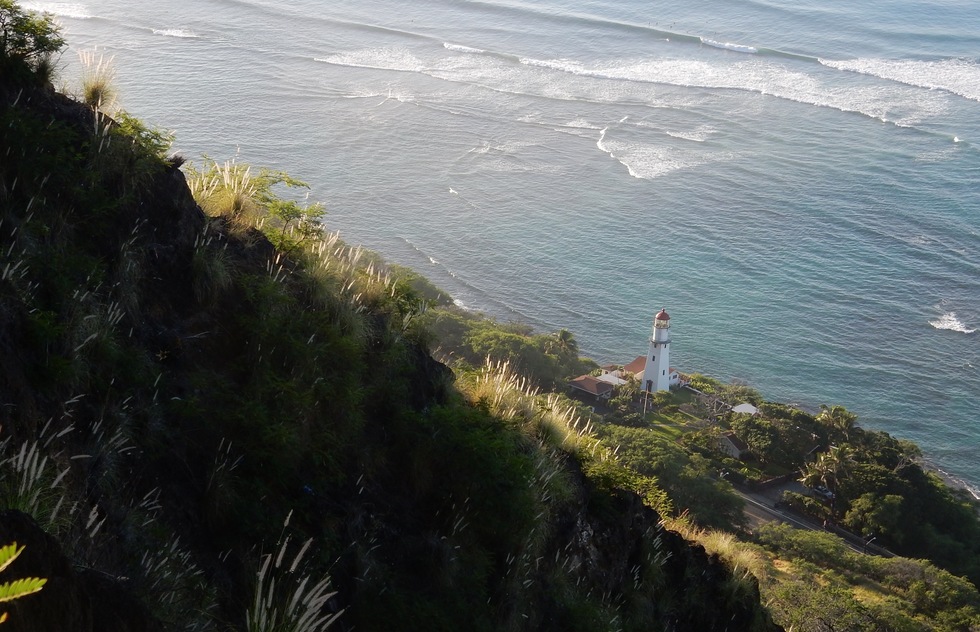 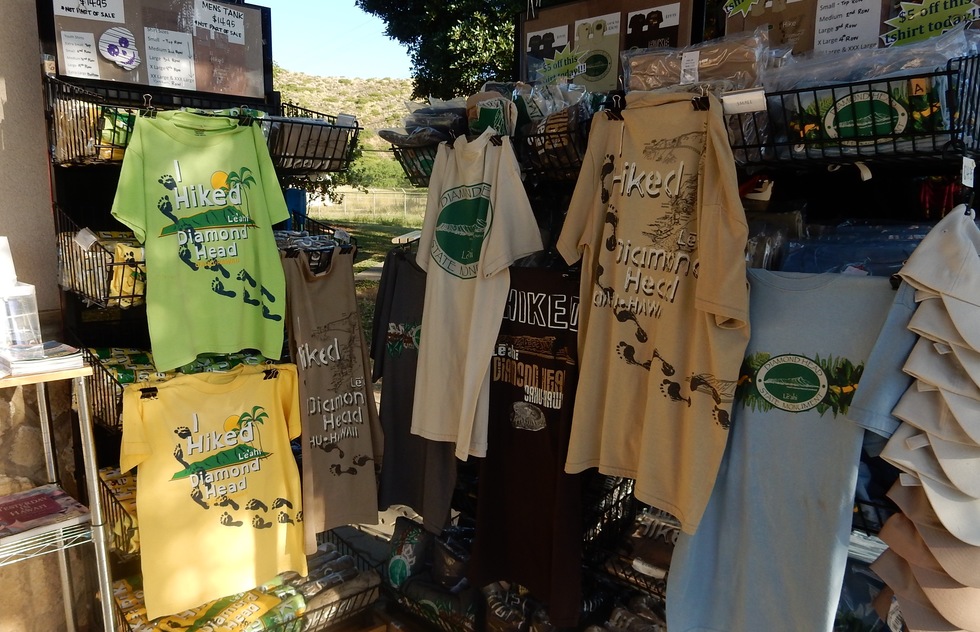 Jason Cochran
Kiosk
What's a tourist attraction without a little commerce? Back down at the parking lot, a kiosk sells officially licensed tee-shirts and guide materials on the area. It was installed in 2014 as a public-private partnership to offset budget cuts imposed by the government. If you forgot to bring sunscreen, you can buy it here.
Outdoor & Adventure
Vacations