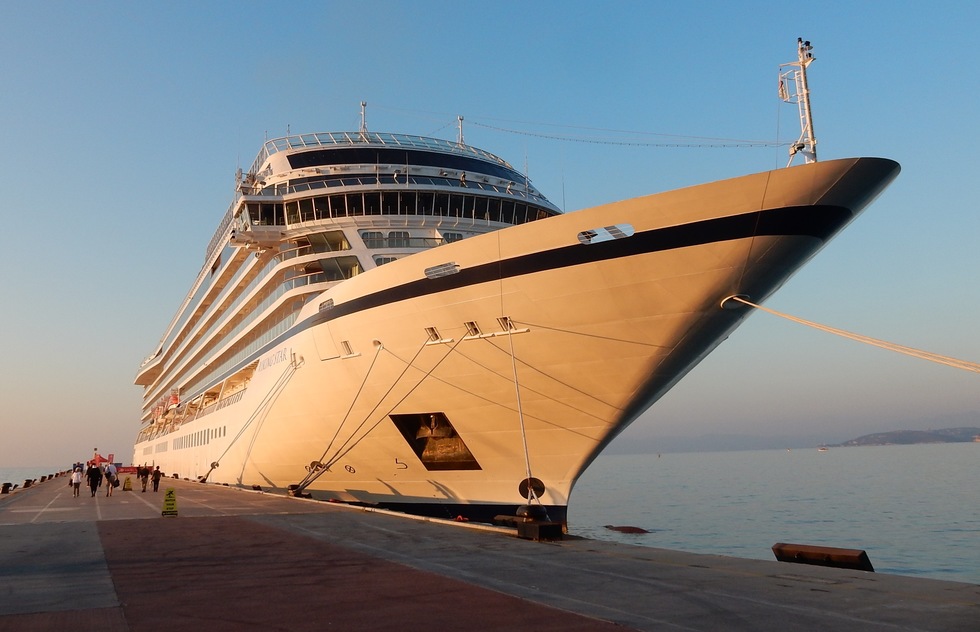 The Viking Star: Things We Love That Every Cruise Ship Should Have

By Jason Cochran
In 2015, Viking River Cruises jumped into oceangoing cruising in a big way, launching the first of several full-sized ships, the Viking Star. In many ways, this luxury ship isn't like much of its competition. As a river cruise company, Viking is used to hosting relatively small groups of around 200 and fewer, and retaining a cozy, high-service product was a key concern as it designed a ship that holds more than 900 passengers. Did they succeed?

This is the Viking Star as seen not through professionally lit glamour photography, but as it actually is—we took these shots ourselves so you can see what the ship is truly like. 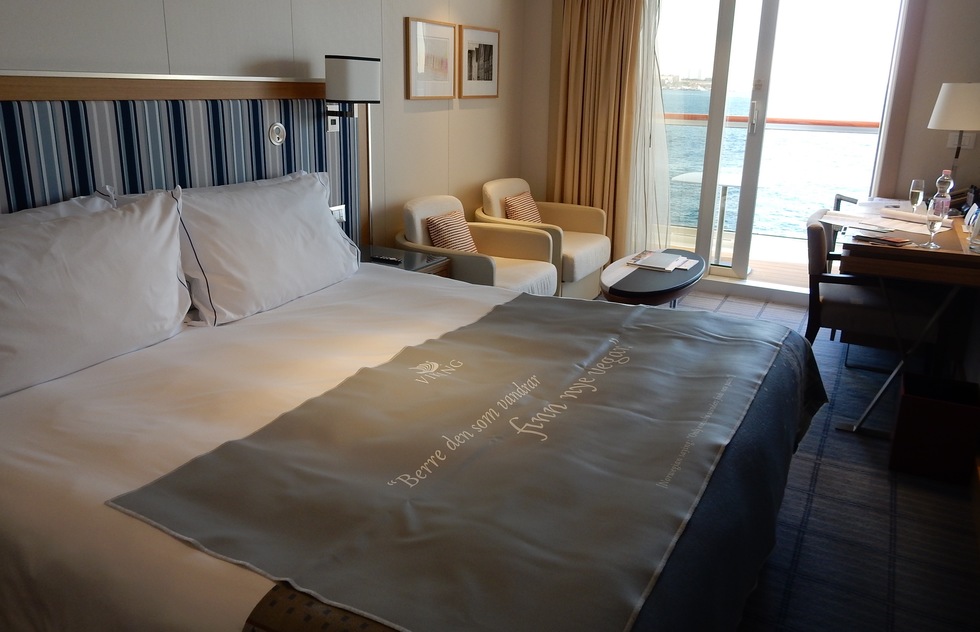 Jason Cochran
Deluxe Veranda stateroom
The most basic stateroom category, Veranda, isn't too basic at all. There's not much difference between the Veranda and Deluxe Veranda rooms, which are both the standard cabin style—they look much the same. 270 square feet with balcony and ample bathroom with a shower. You get two bucket seats—not a couch. Purified water is replenished daily in a pitcher on your desk. 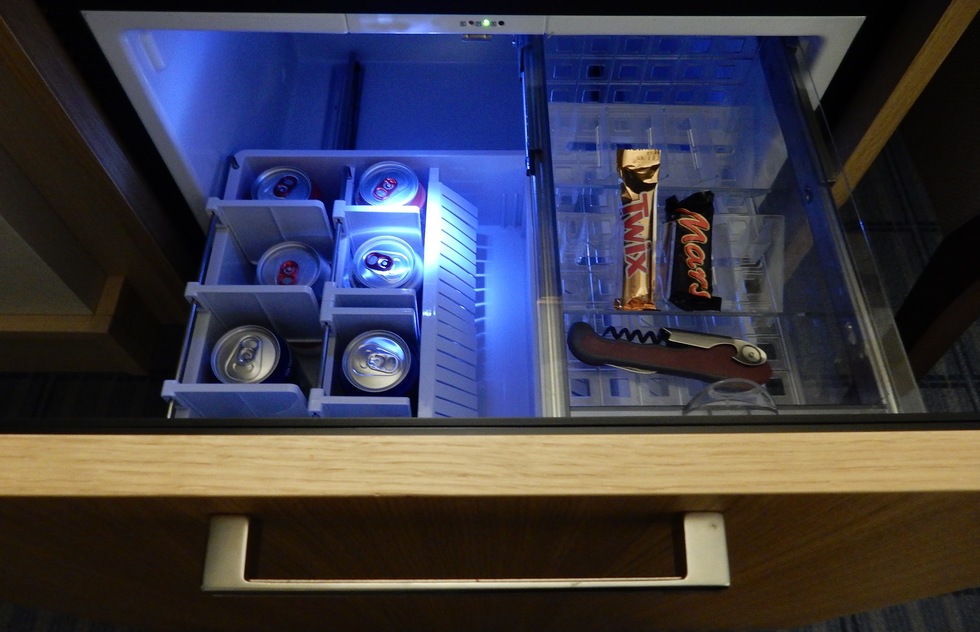 Jason Cochran
Free minibar
The major difference between Veranda and Deluxe Veranda is that if you spring for a Deluxe, you get an in-room pod coffeemaker, a guaranteed reservation in each of the two specialty restaurants (no guarantee with Veranda rooms), and a free minibar stocked with non-alcoholic drinks. Deluxe also gets you 7 more days to book shore excursions (67 days versus 60 in Veranda), although they don't usually book so quickly that matters. 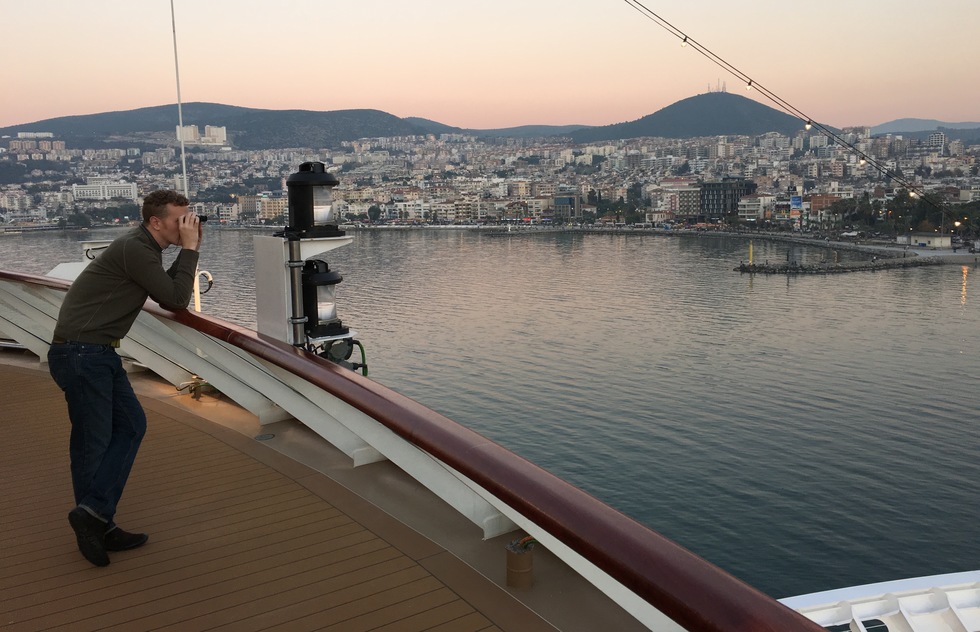 Jason Cochran
Your own binoculars
Deluxe Veranda staterooms also have a free pair of binoculars you can take wherever you go throughout the cruise—a smart touch that often comes in handy when you're in a particularly interesting port town (in this case, Kusadasi, Turkey). 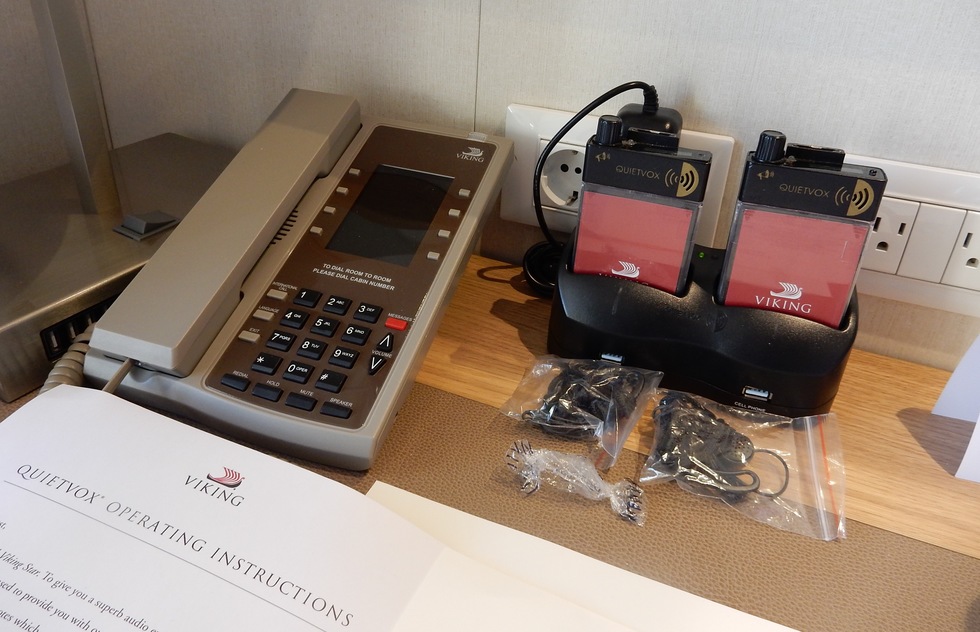 Jason Cochran
QuietVox
Also on your desk are the QuietVox devices, charging in a dock. Every passenger gets one to use on shore excursions, where they let you listen to your guide's narration over long distances so no one has to shout and getting lost is hard. They're not perfect—the headphone cord is too short, for example, forcing you to hang the device around your neck instead of slipping it in a pocket—but it's a smart addition to the cruise, and having one of your own keeps you from having to waste time picking up a new one each day.

As you can see, the cabins also have power outlets for both U.S. and continental European plugs. 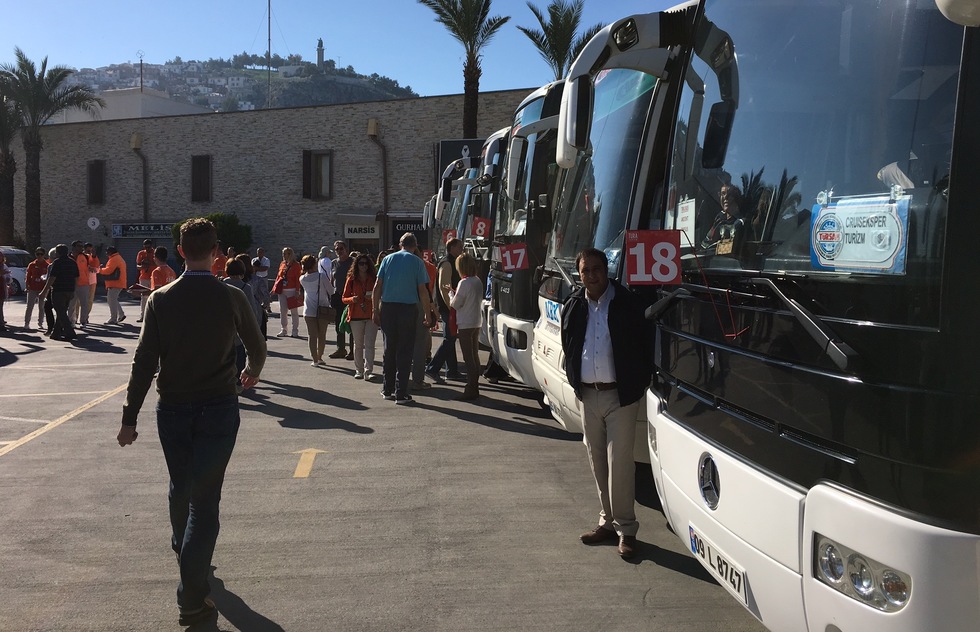 Jason Cochran
Free shore excursions
Another bonus most cruise ships don't offer: Everyone gets a free shore excursion in every port. That means you don't have to shell out for shore excursions unless you want to. The free offering is usually an introductory tour of 3 to 4 hours which many guests use for transportation and orientation.

Unfortunately, the paid shore excursions aren't always accurately described or worth the money. And in some instances, the land-based arrangements are not well organized: this is particularly true at the ports where guests were dropped off near local vendors instead of in more convenient locations, which for passengers with mobility issues becomes a  concern. Mealtimes are not always thoughtfully programmed, either—on a tour I took in Santorini, we were offered nothing for 5 and a half hours, 'til mid-afternoon.

My suggestion: Take the free tour to get your bearings and then make your own way. You'll usually be finished in time to find your own lunch, and you'll save money on planning. 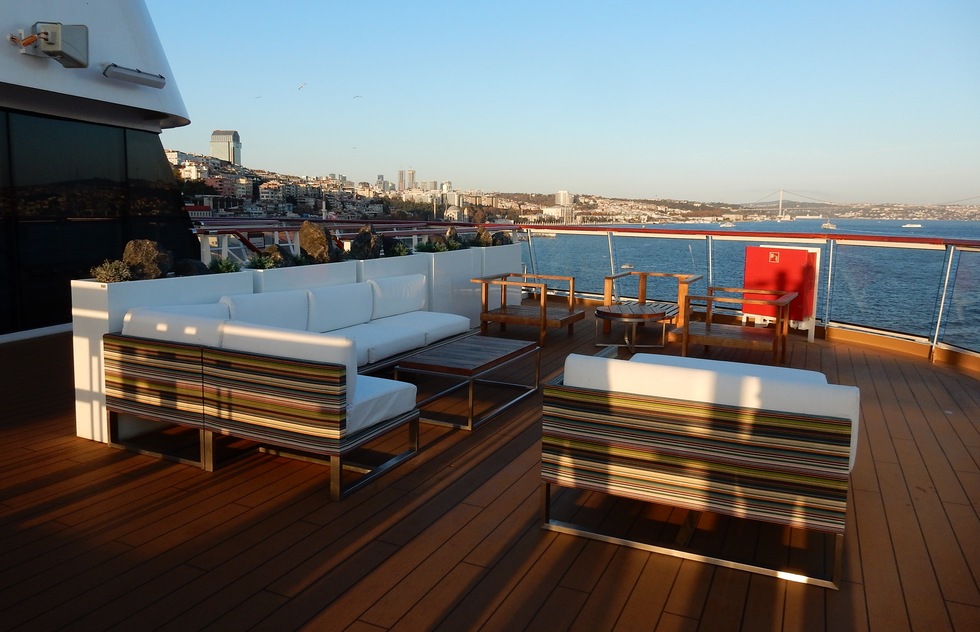 Jason Cochran
Deck lounge space
Back on board for a quick tour of what's cool in the ship design. You'll never find a major cruise ship with these kinds of loungers on deck. At times, it feels like a yacht. 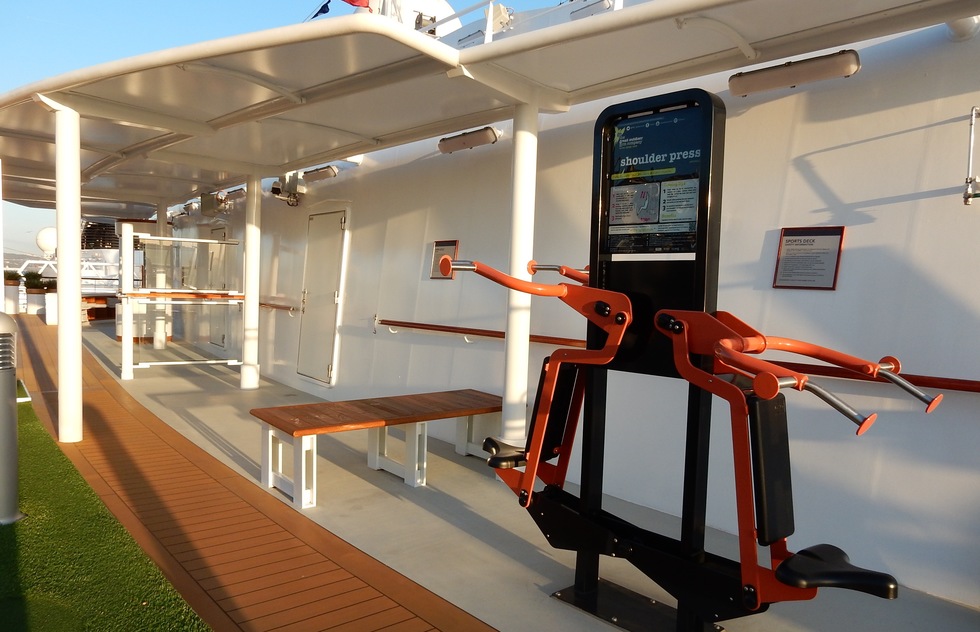 Jason Cochran
Exercise deck
Although there's an indoor fitness center, Deck 9 has outdoor fitness machines (that are rarely busy) so you can work out with a view. 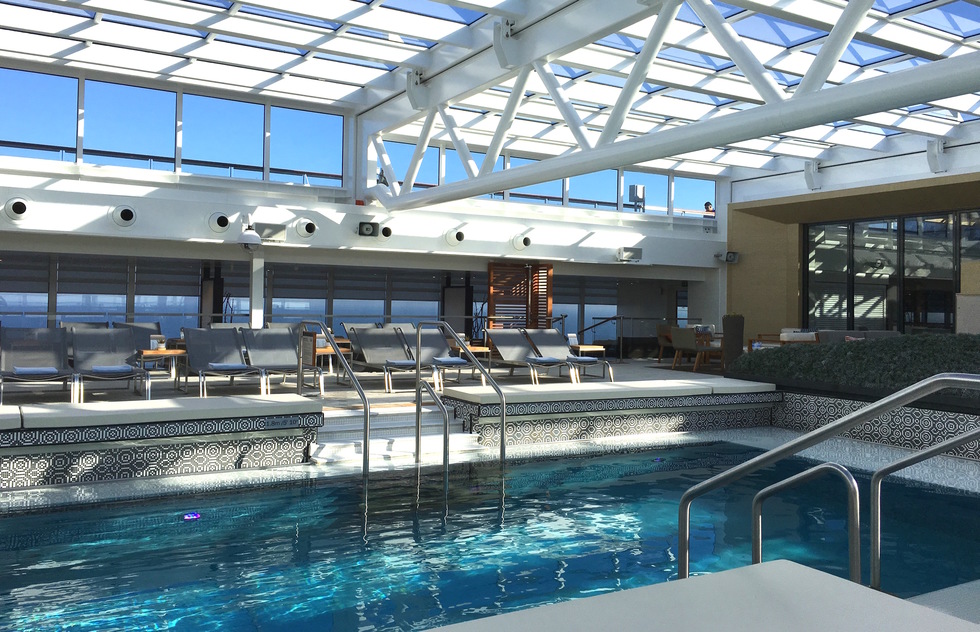 Jason Cochran
All-weather Main Pool
The Main Pool has a retractable roof, so it and its hot tub are used in all weather. 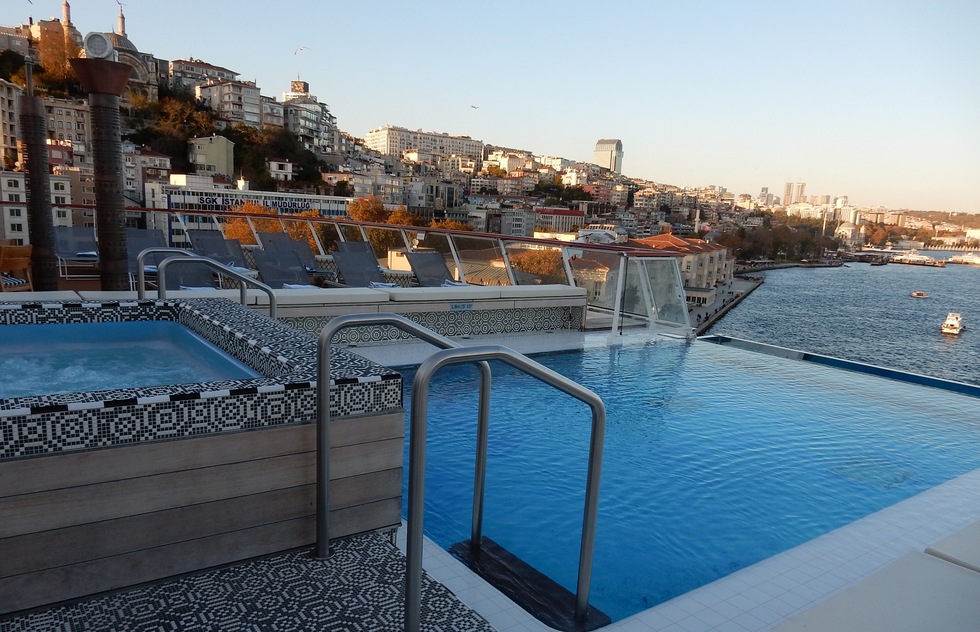 Jason Cochran
Infinity Pool
Meanwhile, aft on the same deck, the Infinity Pool is in the open air but the way its surface extends to the horizon makes you feel like you're at one with the sea. 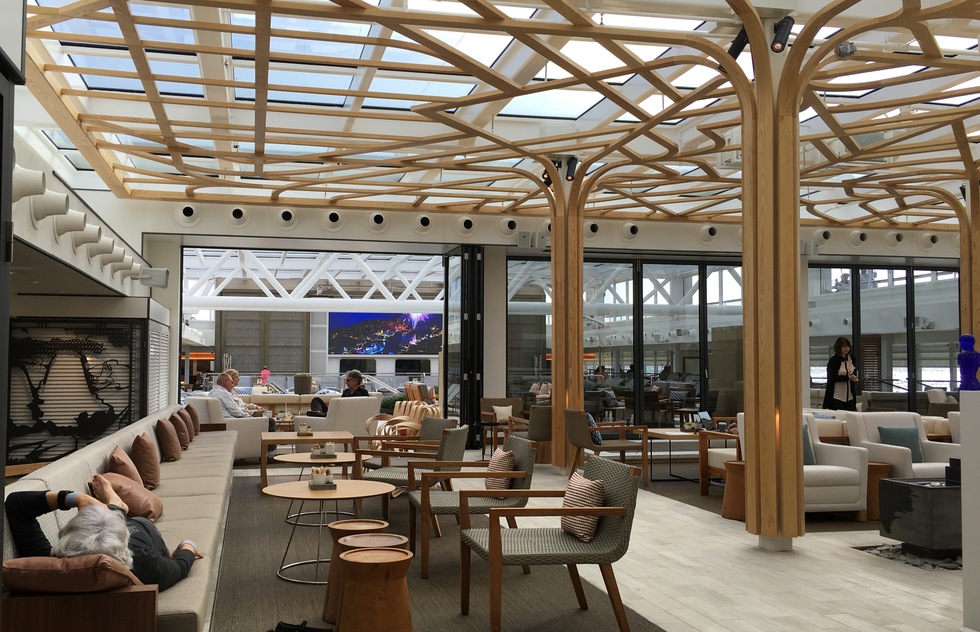 Jason Cochran
Wintergarden
The skylit Wintergarden, located beside the Main Pool, is where high tea is served each afternoon. Otherwise, it's a warm place to nap. 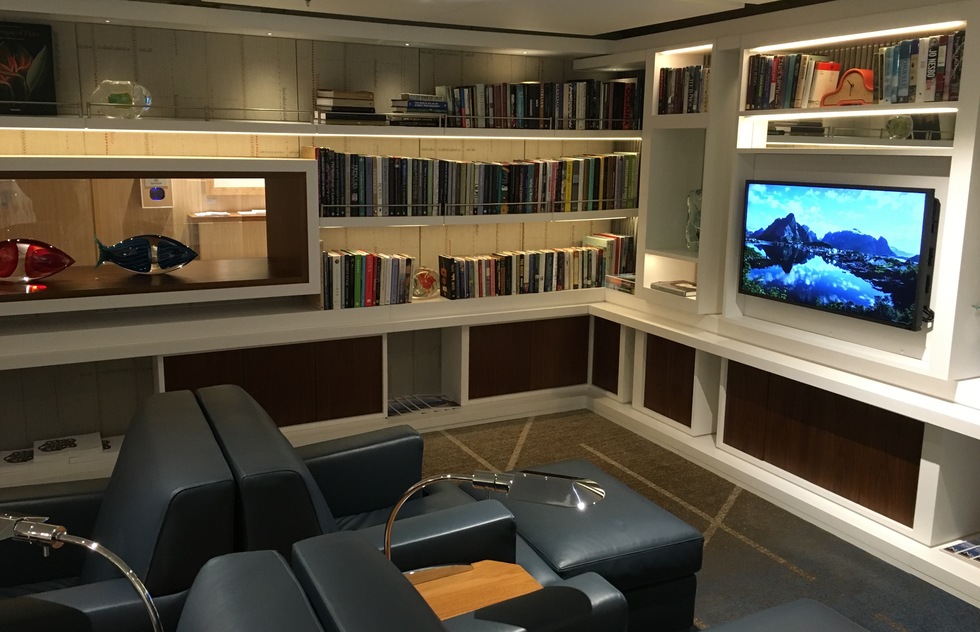 Jason Cochran
Quiet Spaces
There are plenty of hidden places to sit—and they're quiet! Unlike most corporate cruise lines, which pump music into every crevice, the Viking Star is full of quiet places to sit and read (like this one call the Living Room on deck 2). Wherever you go, there are bookshelves stocked with intelligent reading material. There's no library on the ship—because the library is everywhere, and the atmosphere is subdued enough for you to be able to enjoy the books. 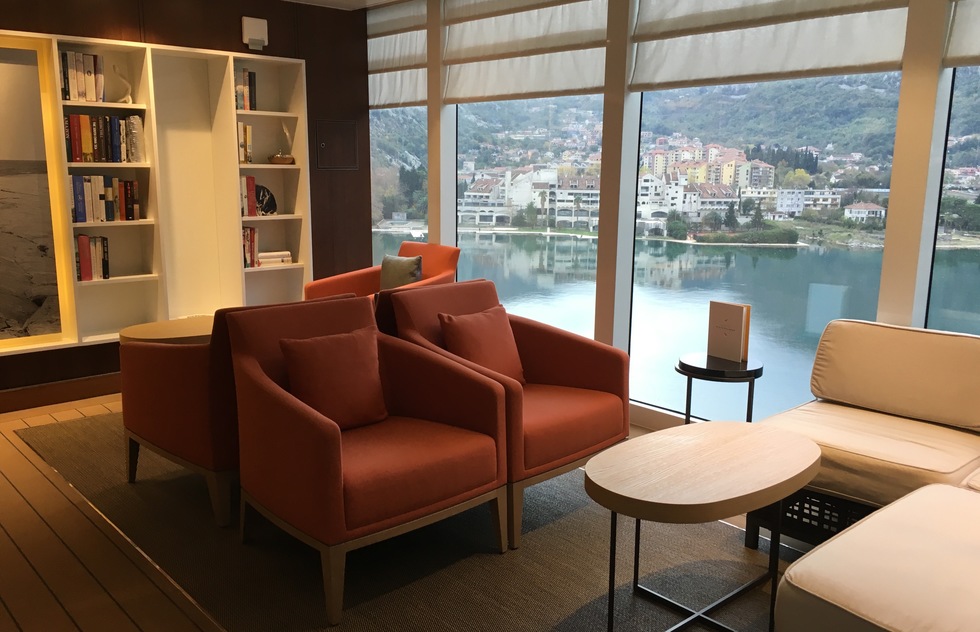 Jason Cochran
Lanai, Deck 7
Here's a reading area on the Lanai of Deck 7—with plenty of windows for appreciating the destination (in this case, Kotor, Montenegro). 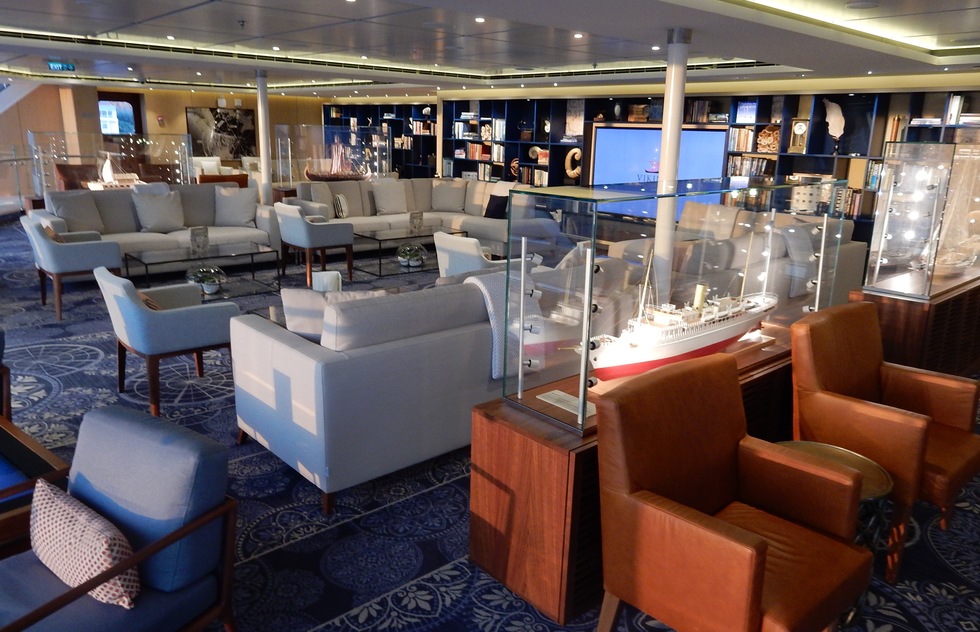 Jason Cochran
Explorers Lounge
The Explorers Lounge, at the prow on Deck 7, has a loft space extending into Deck 8 that's quiet and affords views out to sea. This is a ship that really wants you to chill out instead of throw boisterous limbo parties or herd you into a casino—you'll find neither. 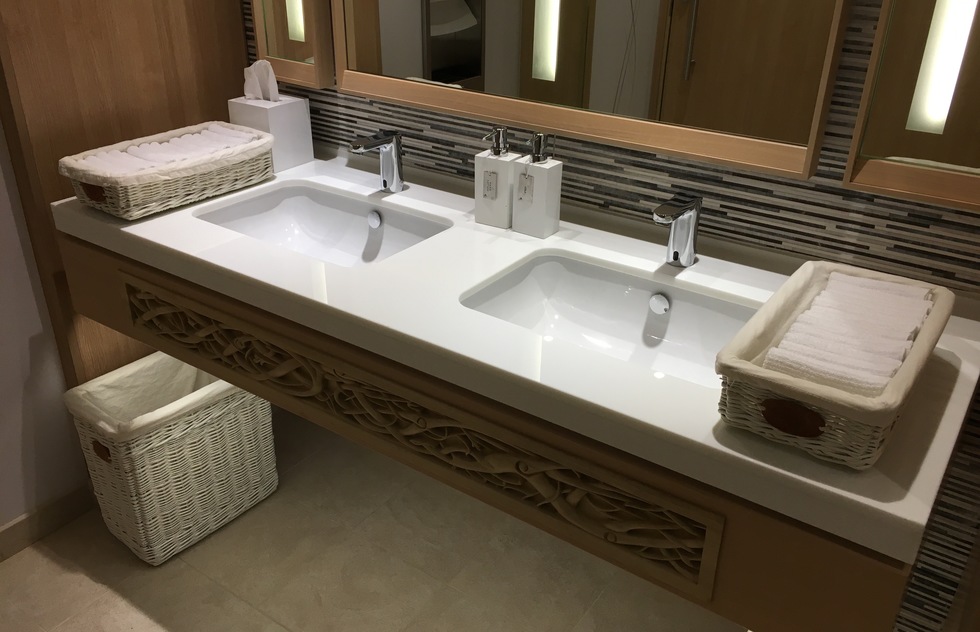 Jason Cochran
High-end washrooms
Sounds of birds or gentle ocean waves are piped into the bathrooms, and you wipe your hands on real towels. 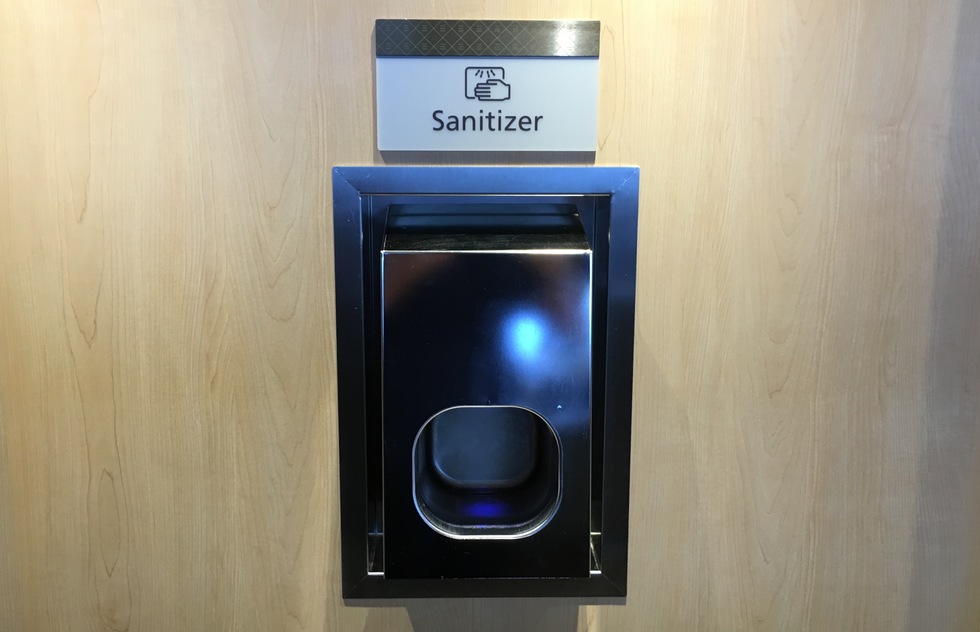 Jason Cochran
Touchless hand sanitizer, Viking Star
Sanitation is a primary worry on all modern cruise ships. Hand sanitizers are found everywhere—stick your hand in, it senses it without touching you, and it blasts a dose of solution. Ironically, it feels and sounds like a sneeze. 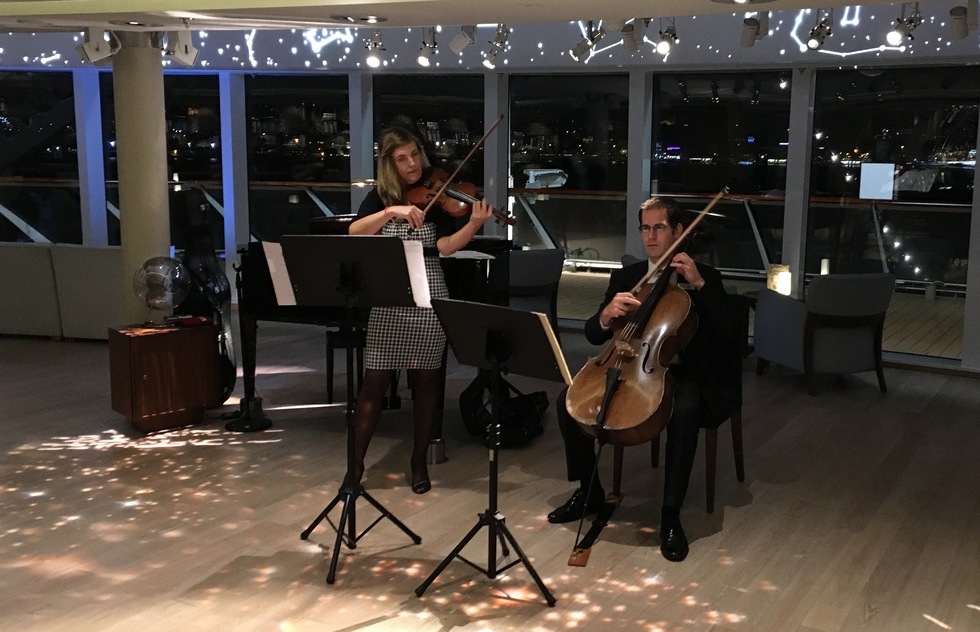 Jason Cochran
Classical music
Entertainment tries to be higher-brow. Sometimes it's a pianist, sometimes chamber music or an impromptu aria. Later at night, the most popular shows include a Rat Pack tribute show by one of the young resident vocalists. Stage shows, though, are not Viking's strong suit. 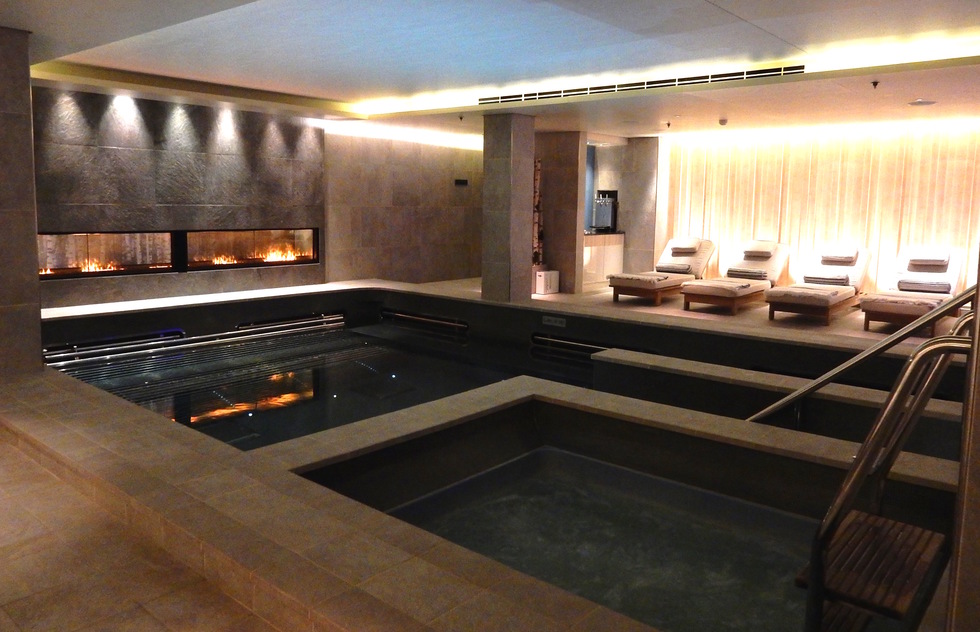 Jason Cochran
The Spa
Anyone can use the indoor pool at the Spa, although most people forget it's there, making it a smart escape. 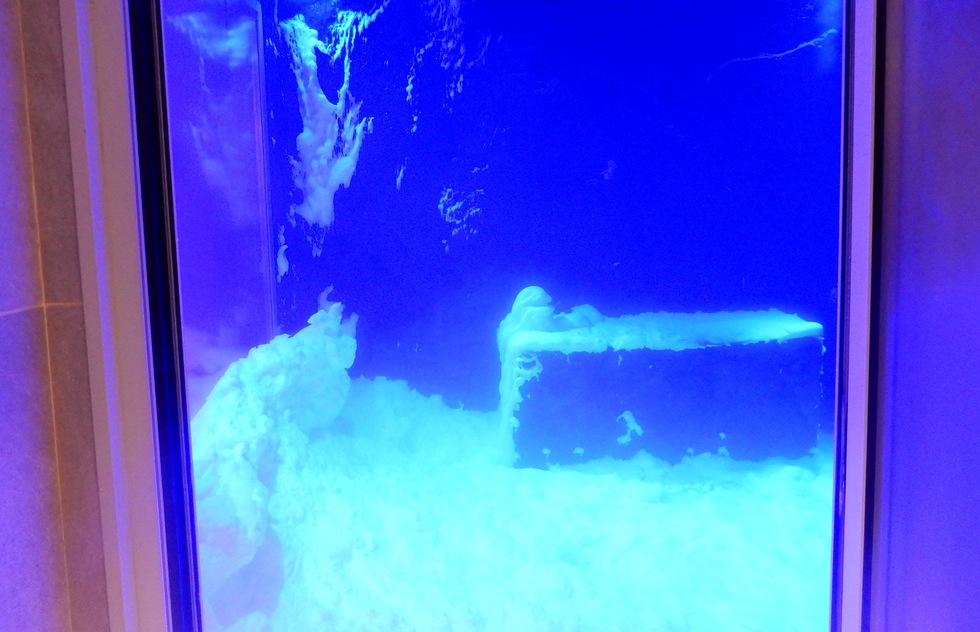 Jason Cochran
Snow room
Remember: Viking is a Norwegian company, so it tries to be gently Sandinavian in its touches. In this case, it's a "snow room" at the Spa, which has a Swedish theme. To simulate a traditional Nordic treatment, clinicians will take you from here to the steam room and back again, slapping you with soggy birch branches in between. It's about the only way Viking's Norse heritage will hit you over the head. 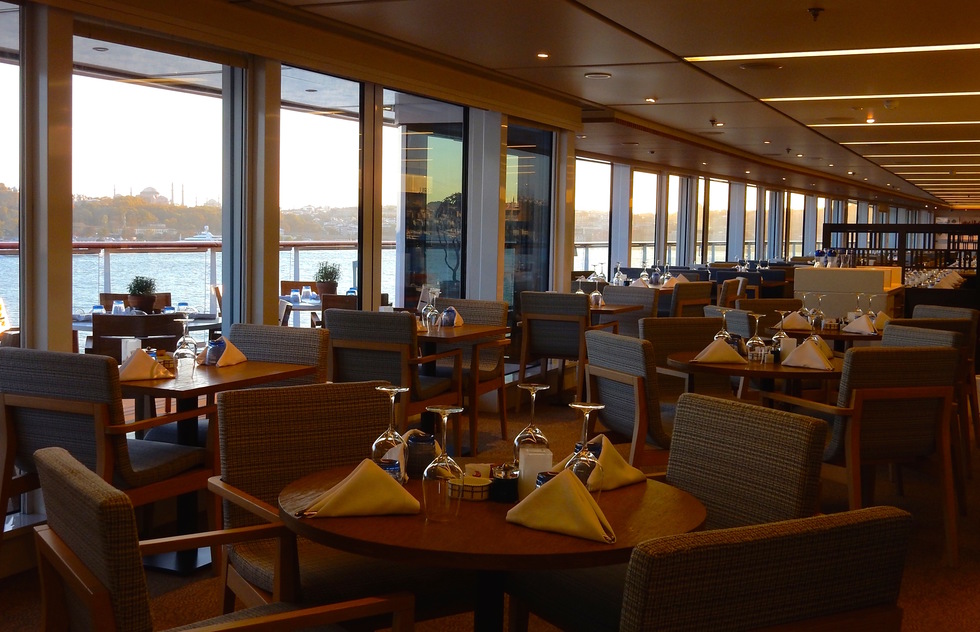 Jason Cochran
World Café, Viking Star
There are four main restaurants. The World Café (pictured) is the buffet option with views from either side of Deck 7. The Restaurant is the default table-service option down on Deck 2. The two speciality choices, Manfredi's (rich, delicious Italian with meatier options beyond simply pasta and risotto) and The Chef's Table (experiemental themed menus that change every few days; not really a chef's table but truly skilled cooking), don't cost extra to enjoy but you do need to secure a reservation. The food was among the best I've had on a cruise ship, and that includes the non-specialty fare that most cruise lines try to make dull in order to push you to pay more. 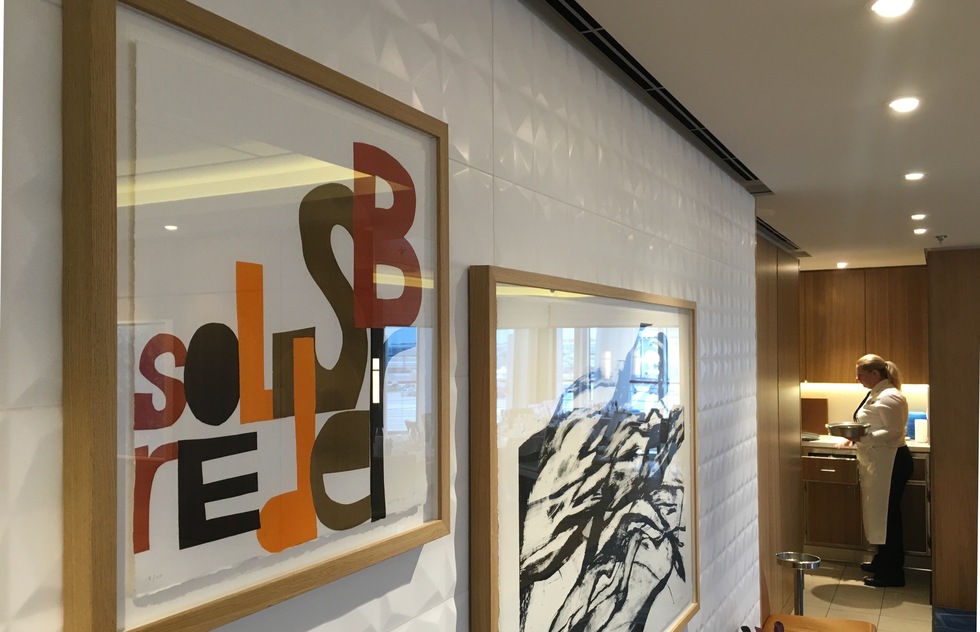 Jason Cochran
Magne Furuholmen art
What other cruise ship can claim to own artwork by the guy responsible for "Take on Me"? Norwegian Magne Furuholmen, one-third of the group A-ha, is also a contemporary artist who created this piece, which faces aft in The Restaurant.

That's not the only pop culture connection on board: a certain 1970s heartthrob has served as cruise director (click here for that). 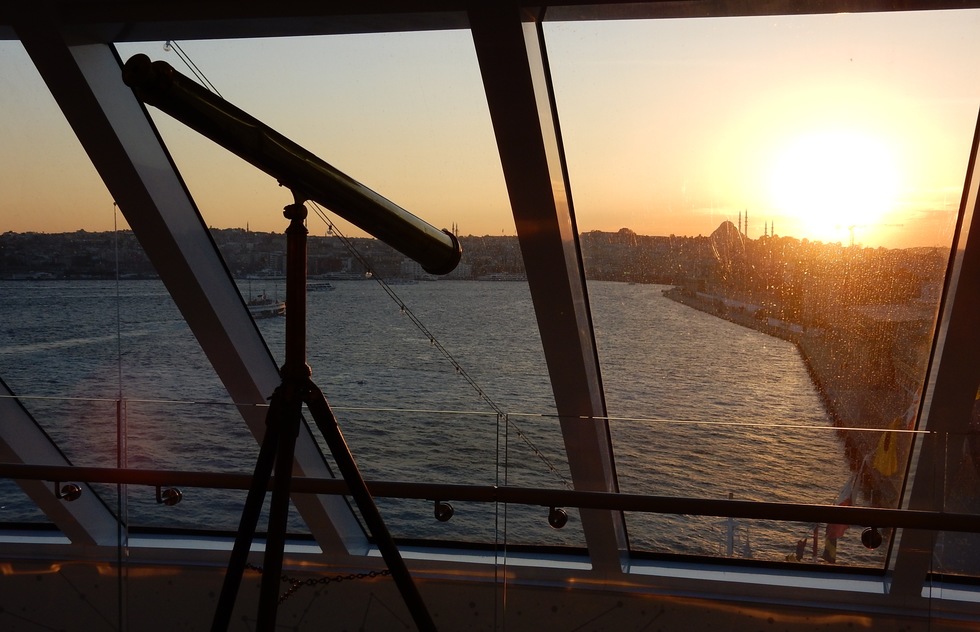 Jason Cochran
Telescope, deck 7 forward
Depending on the itinerary, the Viking Star generally costs between $250 and $300 a day—but remember, that includes a shore excusion in every port, which other lines make you pay extra for, nor do you have to pay extra to eat in the speciality restaurants.  One more thing: Wi-Fi is also free, although it's not as speedy as it is on land. In an industry where 75¢–$1 a minute is typical, getting that for free is something. 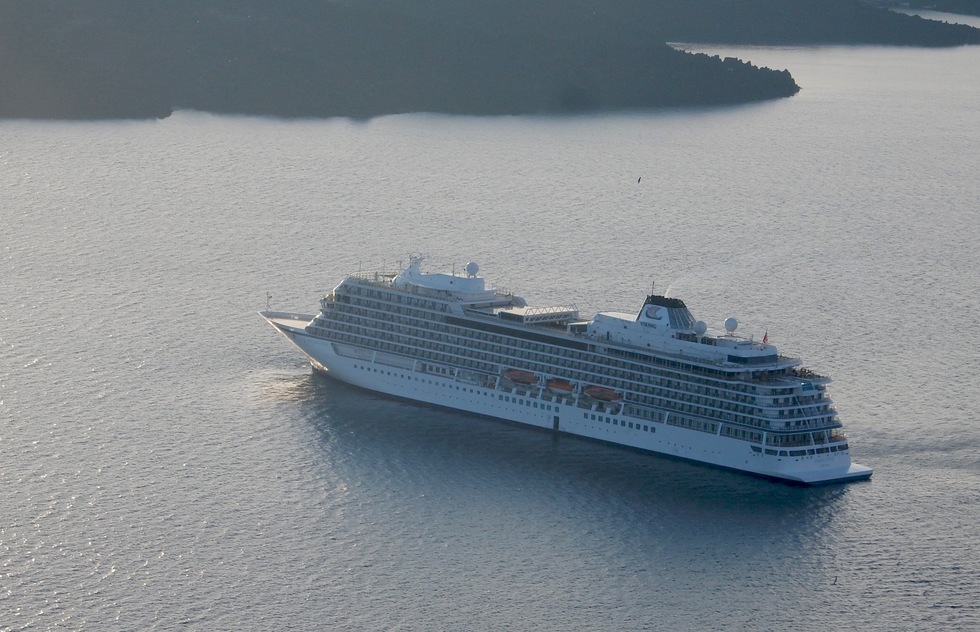