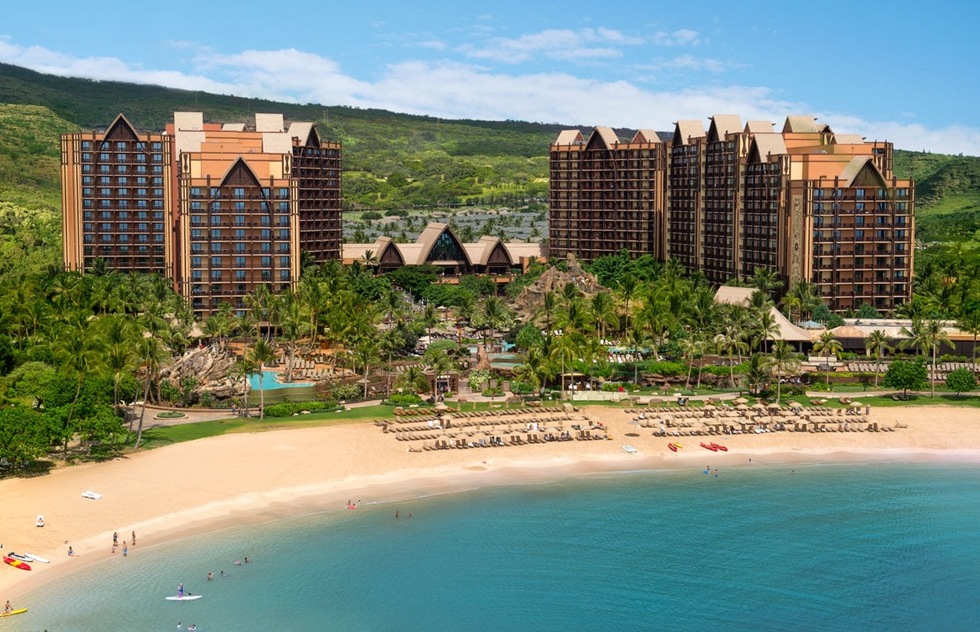 Disney's Aulani in Hawaii: See What It's Like in Photos

By Jason Cochran
Most American families are familiar with The Walt Disney Company's massive resorts in both Florida and California. But relatively few of them will have experience with the company's custom-built Aulani resort at the Ko Olina development, which opened in 2011 about 30 minutes west of downtown Honolulu on the Hawaiian island of Oahu. How much like Disneyland is it? Is it crawling with appearances by Disney characters, and do guests have to wait in lines?

Have a look at what Disney's Aulani resort (officially called "Aulani, a Disney Resort & Spa") is really like—and what to expect out of a vacation there—with Frommer's' exclusive photo tour. 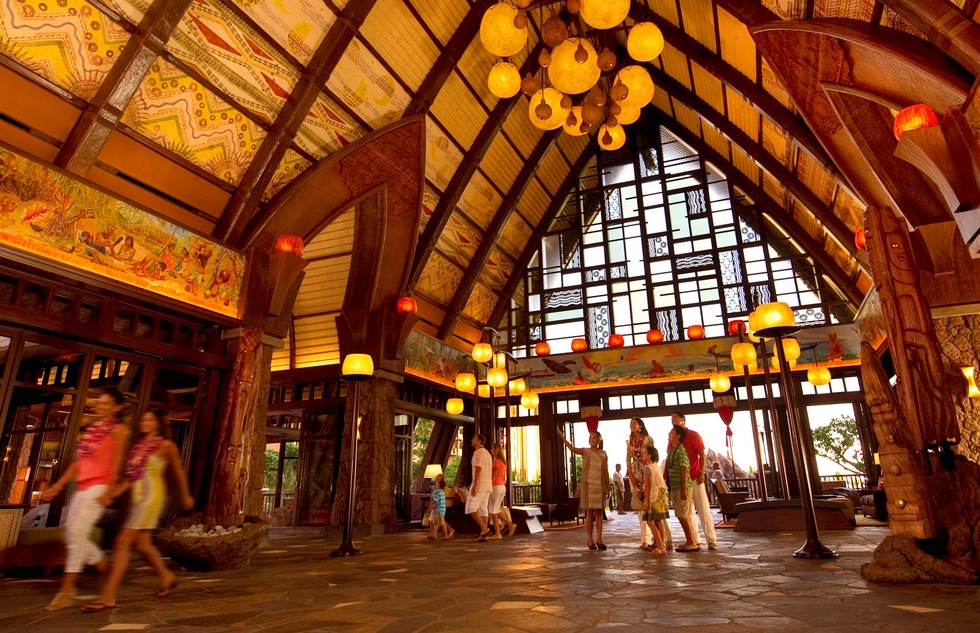 Disney
Maka'ala Lobby
The first thing to understand about Aulani is that in terms of quality, Disney's non-park travel products (including Disney Cruise Line and Adventures by Disney tours) tend to be of a much higher standard than its crowded theme parks. Partly as a result of the higher rates families pay to be a part of them, non-park Disney resorts tend to maintain a closer-to-luxury level and come with few of the annoyances that can mar an exhausting trip to one of its parks. In Aulani's case, that positive impression begins with the soaring Maka'ala Lobby that opens out onto the water park in its courtyard—guests won't spend much time here, but it vaulted ceilings are nonetheless an emblem of the resort. 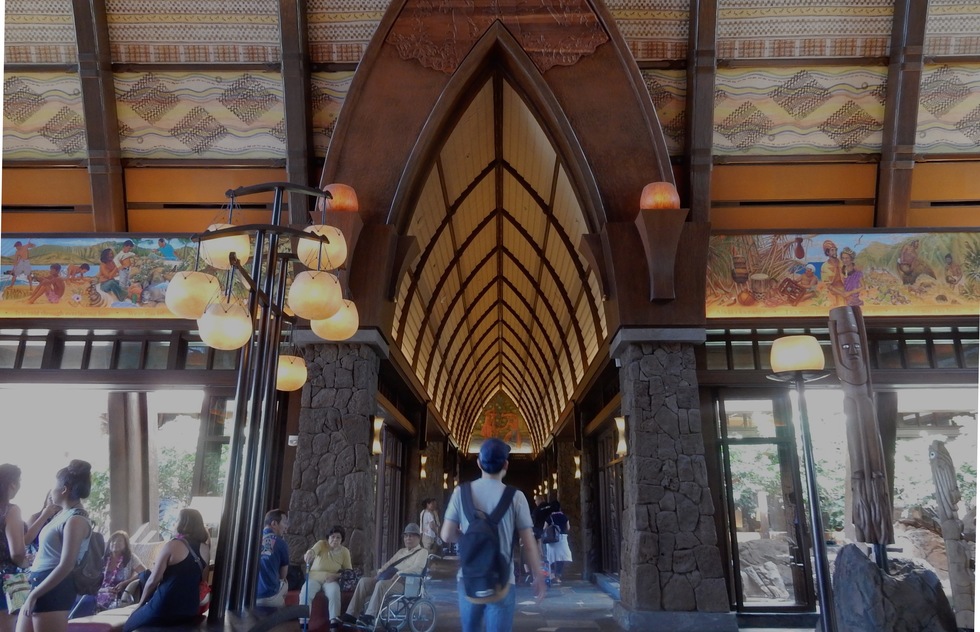 Jason Cochran
Maka'ala Lobby
Besides the check-in and tour desks, the lobby has a few souvenir stores (more on those later) and a verandah that overlooks the swim area and the beach beyond it. Upon check-in, all females receive an orchid-and-tuberose lei, while males receive a kukui nut lei—receiving a lei is, of course, a traditional Hawaiian welcome. Hawaiian culture and history is a huge part of the "story" that Disney has put into the hotel—the fact you will see no Disney characters in this 200-foot-long ribbon mural is a sign that the company intends to put Hawaiian culture front and center. 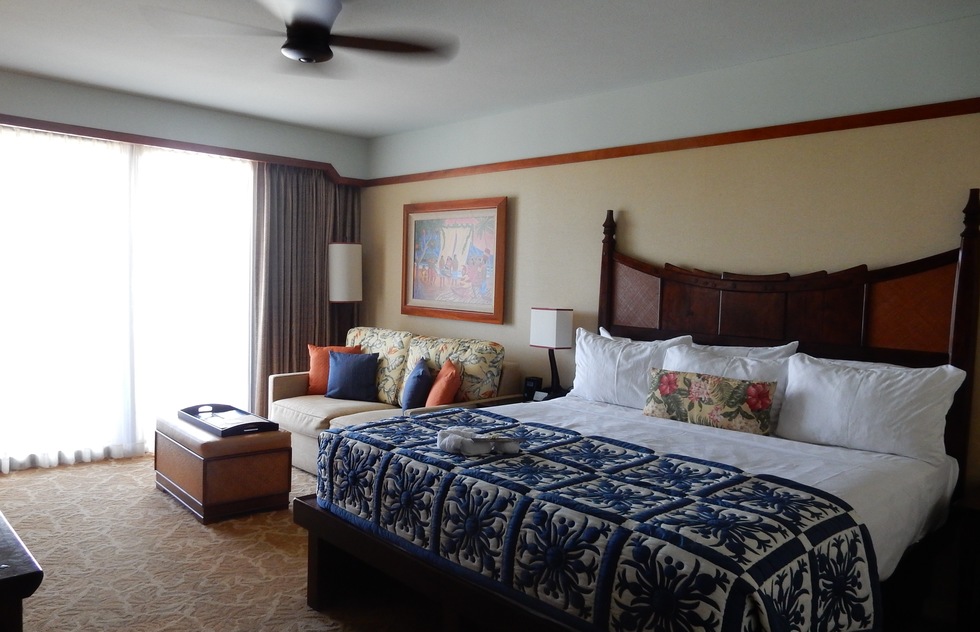 Jason Cochran
Standard room
Standard rooms are a nice-sized 382 square feet and sleep up to 4 adults (many have two queen beds; this one has just one king bed). Every room has a private balcony or porch. All rooms can see some sea, but the more that view takes in the Pacific Ocean, the more prices ascend. (Many rooms are also assigned to subscribers of the company's time-share program, Disney Vacation Club.) All rooms have a Blu-Ray player, a small fridge, a coffeemaker, and free Wi-Fi. 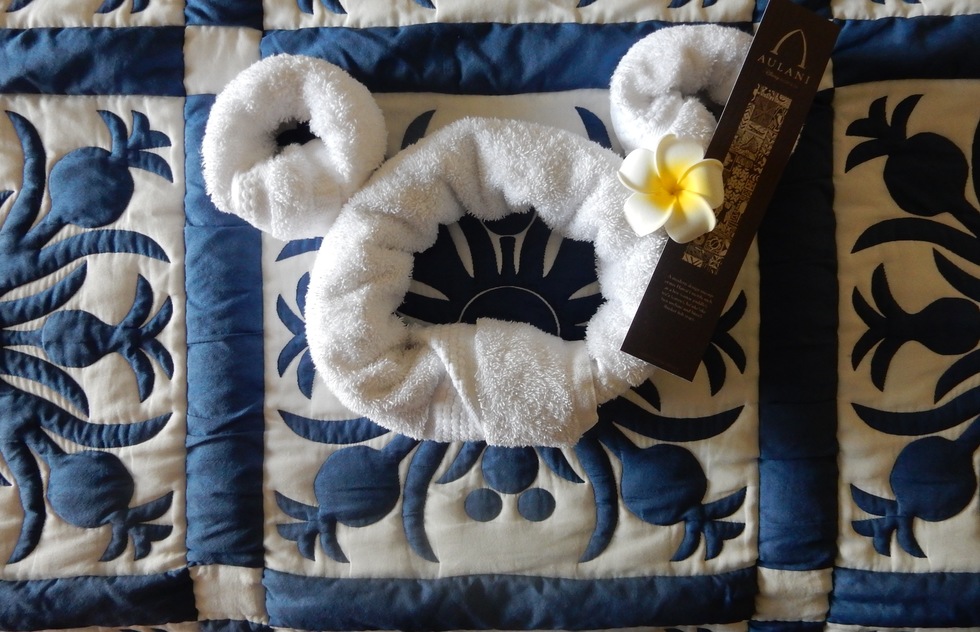 Jason Cochran
Towel sculpture
Disney is known for its towel sculpture awaiting guests on their beds. Here, it's the old-fashioned mouse ears (with an Aulani bookmark for beach reading). The flower clip is plastic, so it'll look just as fresh on the last day of your visit. 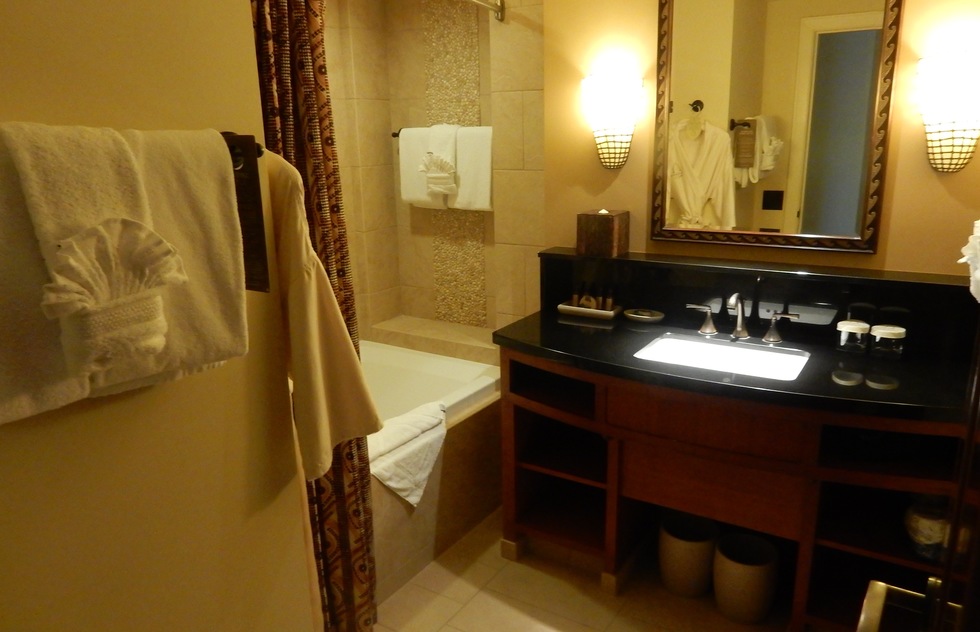 Jason Cochran
Standard bathroom
Bathrooms aren't exciting viewing, but people want to know what they're like, so here it is. At Aulani, they're large, with the sink inside the same room as the bath/shower, plus a separate water closet. Now let's get out of the room and see the resort grounds. 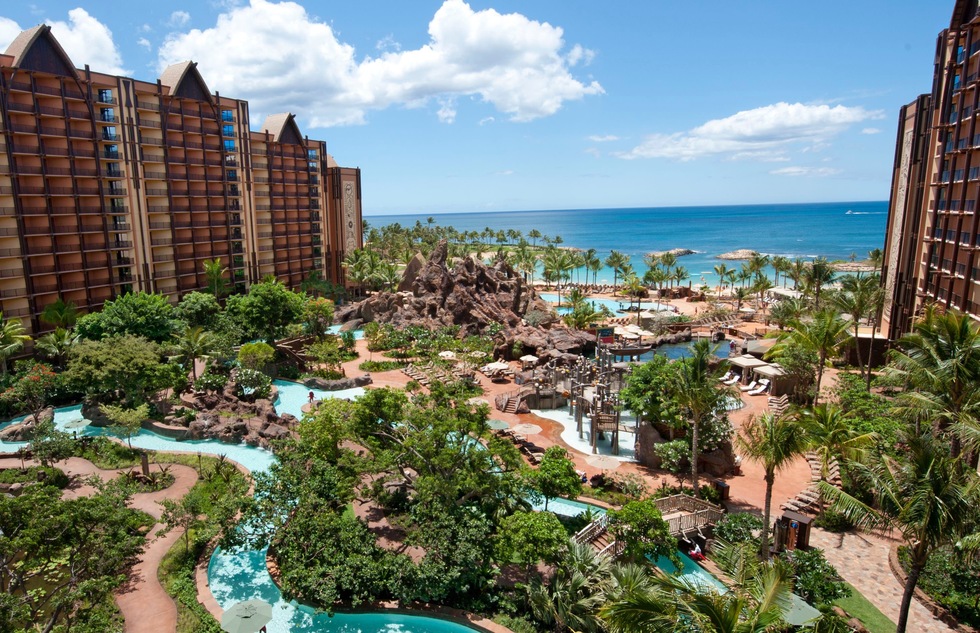 Disney
Play areas
Aulani's two room towers stretch like arms around the main pool and play areas, and the beach lies beyond them. In the foreground, you can see the 900-foot lazy river (Waikolohe Stream) and the false volcano remnant (Pu'u Kilo) from which the two water slides plunge (Volcanic Vertical and the two-person Tubestone Curl raft flume). 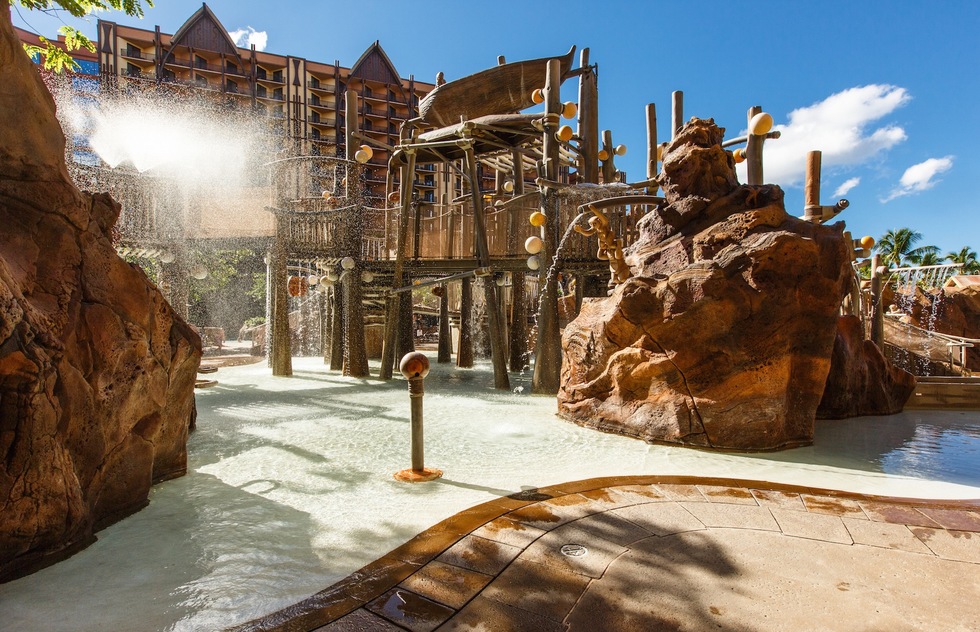 Disney
Menehune Bridge
The children's 2,100-square-foot wet play area is heated to 82 to 86 degrees Fahrenheit, like all the man-made pools at Aulani. A smaller and simpler play area (water spouts and the like) for the youngest children is located nearby. 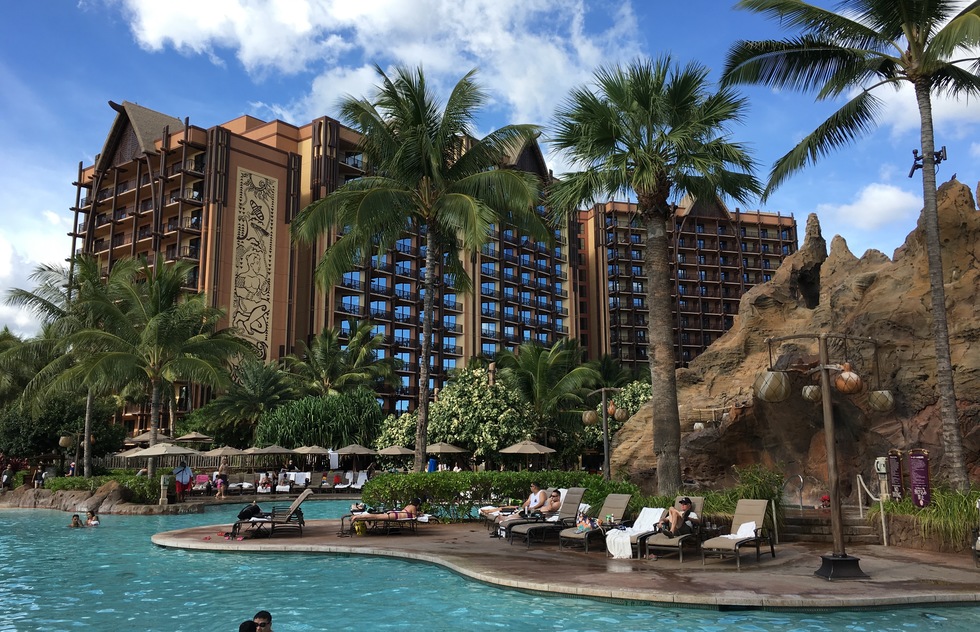 Jason Cochran
Waikolohe Pool
The main pool complex takes up some 8,100 square feet. There's another "adults-only" pool (Wailana Pool) with an adjoining (but not swim-up) bar on the north side of the resort, near the Aulani spa (Laniwai) and fitness center, and within sight of another hotel, the Four Seasons Resort Oahu at Ko Olina. 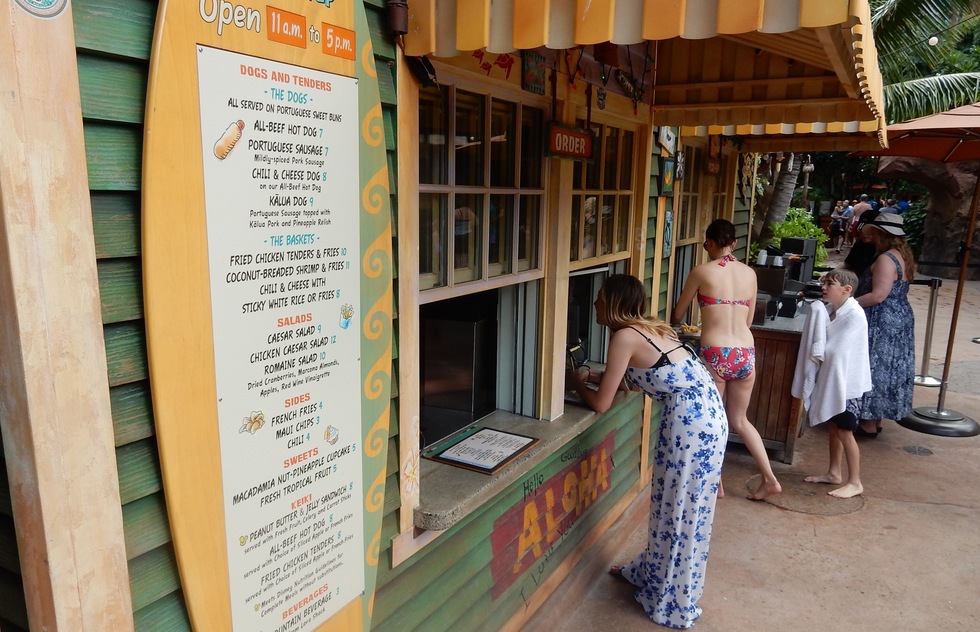 Jason Cochran
Pool food
Guests must pick up a wristband each day to use the pool area. There's a cluster of food options on the pool deck, including Mama's Snack Shop and The Lava Shack, which serves the same frozen pineapple dessert that is beloved as the Dole Whip inside the mainland Disney parks. You'll also find Papalua Shave Ice, serving one of Oahu's most well-known snacks—but it must be said Aulani's version is not remotely close to the most delicious version of it on the island. (For some of the best local food in Oahu, see our slideshow on that.) 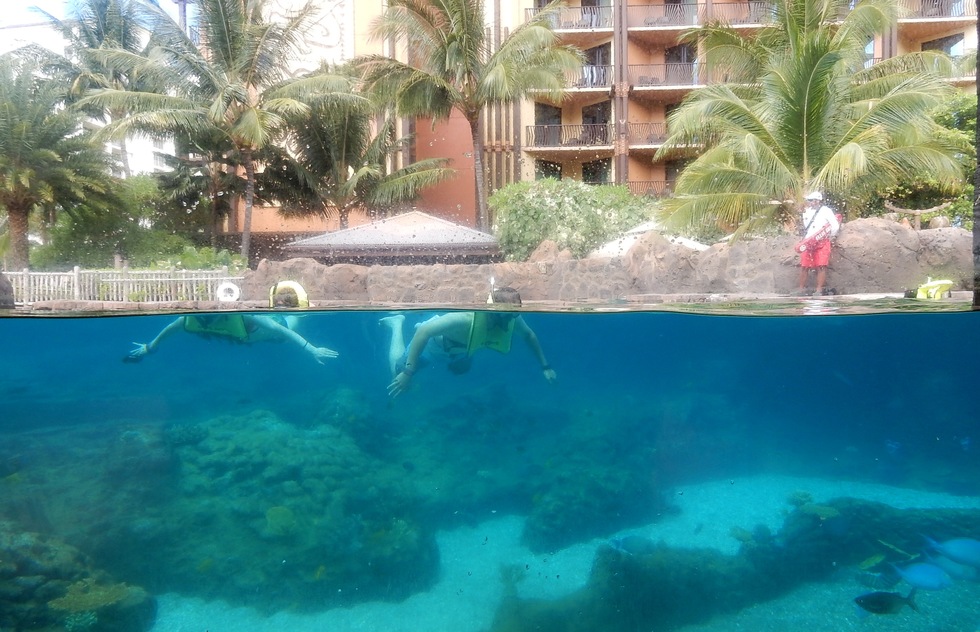 Jason Cochran
Rainbow Reef
The Rainbow Reef saltwater area is stocked with tropical fish and guests snorkel above them—unlike most of the pool area, this activity requires an extra payment. 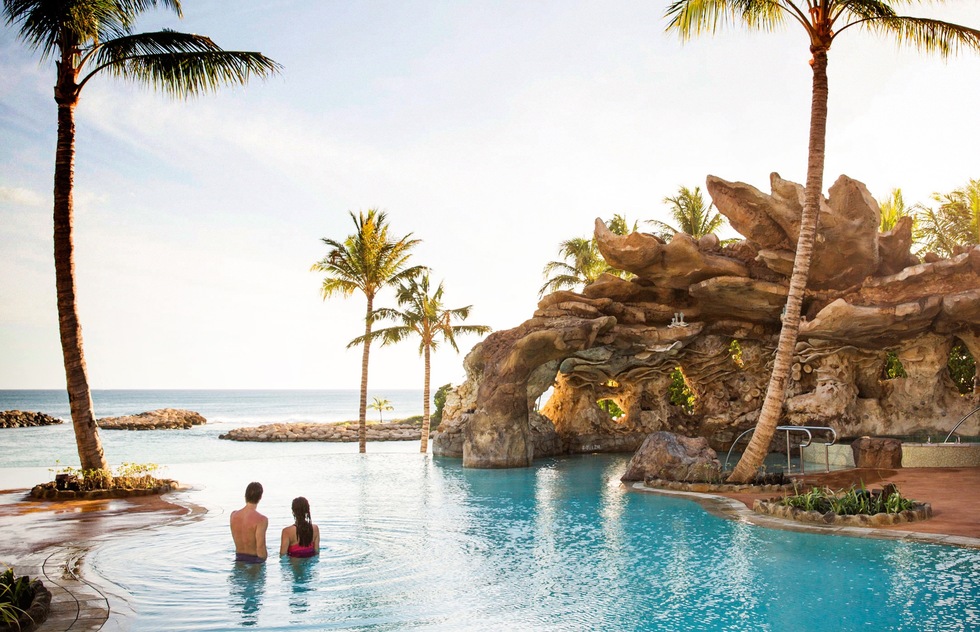 Disney
Ka Maka Grotto
The resort installed this newer infinity pool after opening to increase capacity and bring guests closer to the sea. 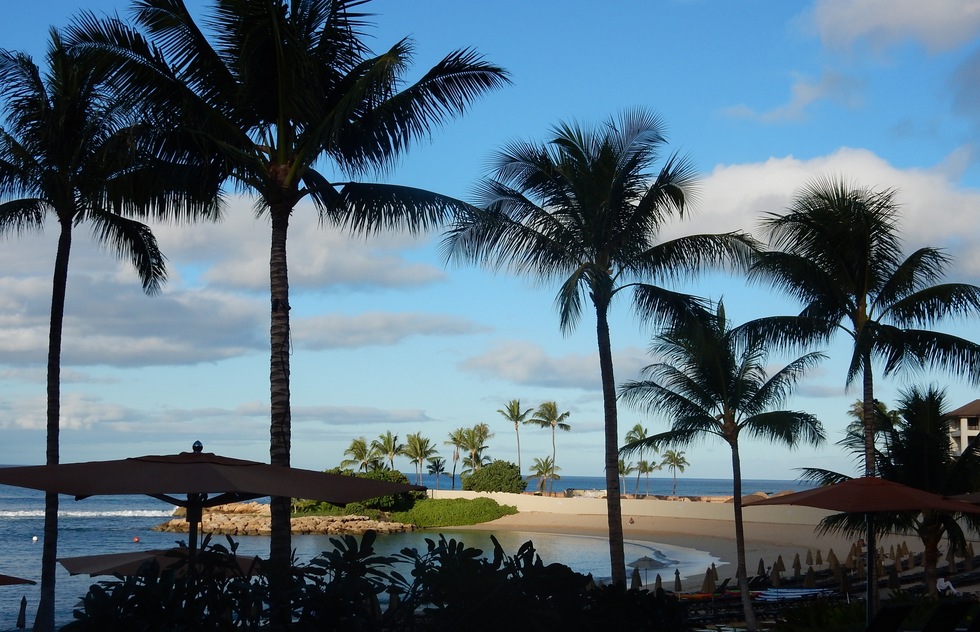 Jason Cochran
Ko Olina's beaches
The beach lagoon at Aulani is man-made, which means its sand is powdery, its surface is flat (waves crash on a man-made barriers away from shore), and you can walk a number of yards into the sea without stepping on rocks or getting in over your head. This lagoon is one of four similar ones in the Ko Olina development, of which Disney is a tenant, and there's a shoreline path you can take past the other beaches used by neighboring resorts, including a Marriott. Conveniently, there's also some decent restaurants, shopping, and ice cream within a short, safe walk within the Ko Olina development—which comes in handy considering the high prices of the Disney restaurants. 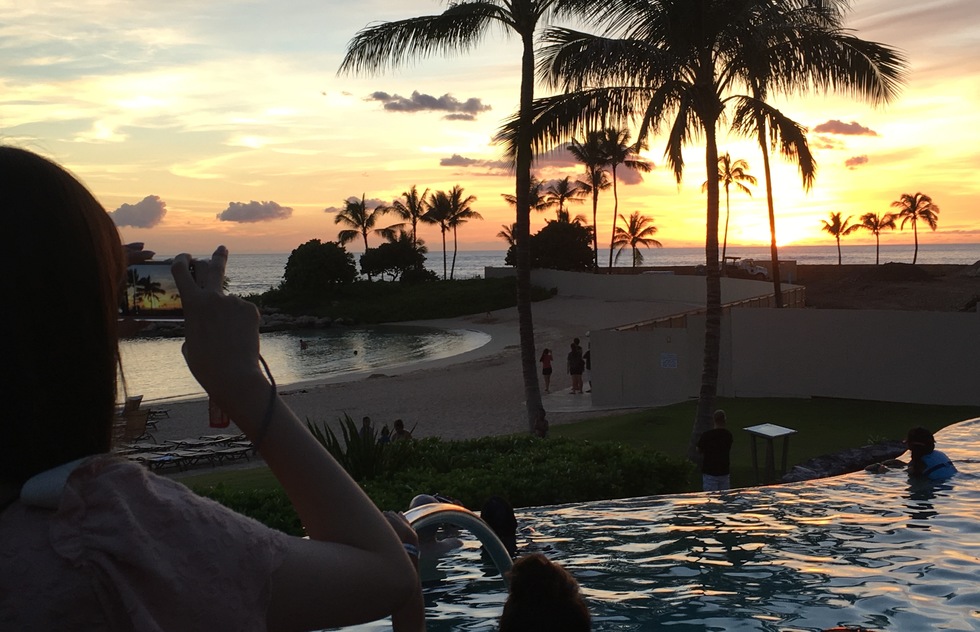 Jason Cochran
Sunset
Everything faces west, which means sunset is a nightly event. At Aulani, the dusk hour is programmed with free storytelling and other activities to get guests outside and enjoying the twilight. Many guests just hop in the infinity pool to watch the sun wink into darkness at the horizon of the ocean. 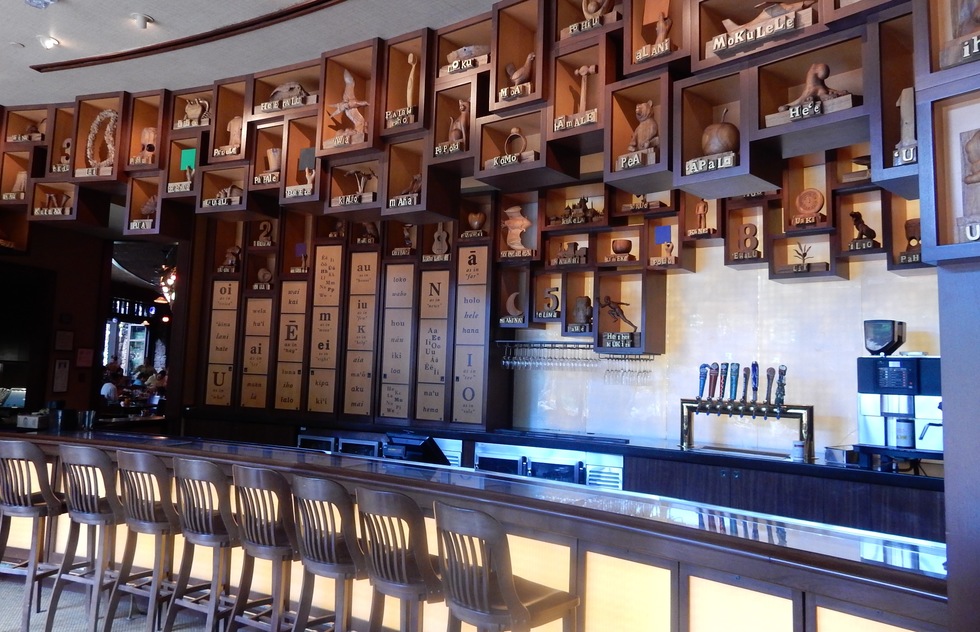 Jason Cochran
The ‘Ōlelo Room
The coolest place to eat and drink is the ‘Ōlelo Room, decorated with a diorama glossary of Hawaiian words—another way Disney is careful to promote Hawaiian history and culture among tourists. To work in this bar, staff must be fluent in native Hawaiian, a fact that has Disney cast members hitting the books and competing to earn the assignment. The other on-site restaurants are 'AMA 'AMA (high-priced and sheltered open-air with many ocean-facing tables) and Makahiki (not on the water, more casual but still on the pricey side). 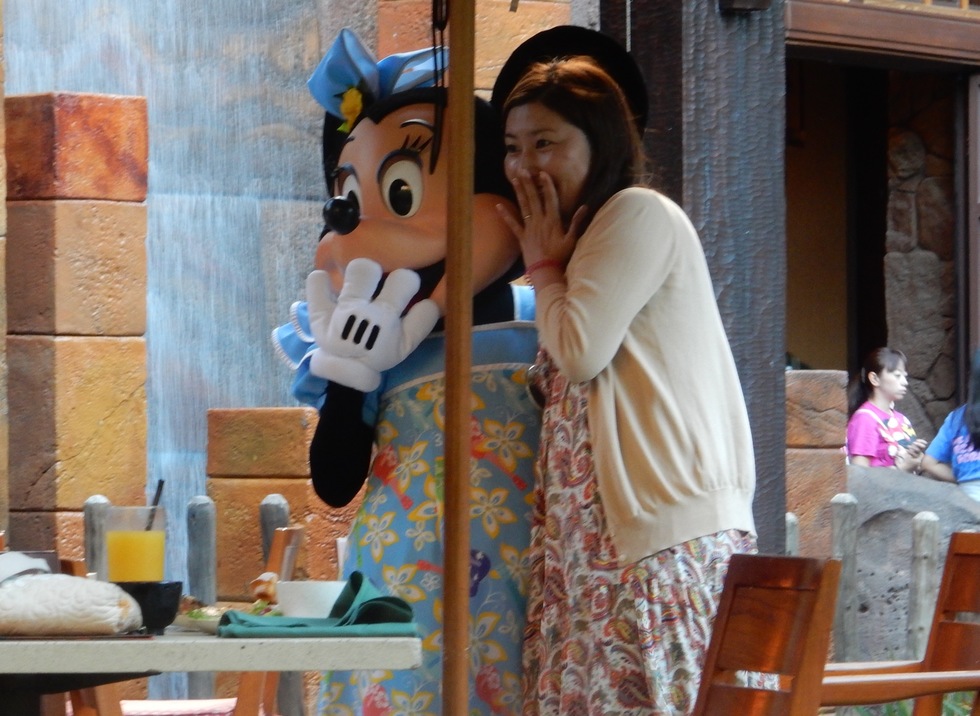 Jason Cochran
Character breakfast
The Mahahiki restaurant is one of the only places on the entire campus where you can reliably find costumed Disney characters—they appear on schedule every morning at the "character breakfast". Why are there so few characters? Disney wanted to be sensitive to the Hawaiian culture and minimize the intrusion of its entertainment franchises—planners had a mantra among themselves that everything at Disney's Hawaiian venture should always have "a big H but a little D."

American visitors will also notice how many Aulani guests are from Japan—a big reason Disney chose to build Aulani in Hawaii is its relative proximity to Japan, where Disney characters are massively popular and locals have their own Disney parks. So around 40% to a half of your fellow guests will likely hail from Asia, but curiously, many of them will be couples while most U.S.-based guests are families with children. 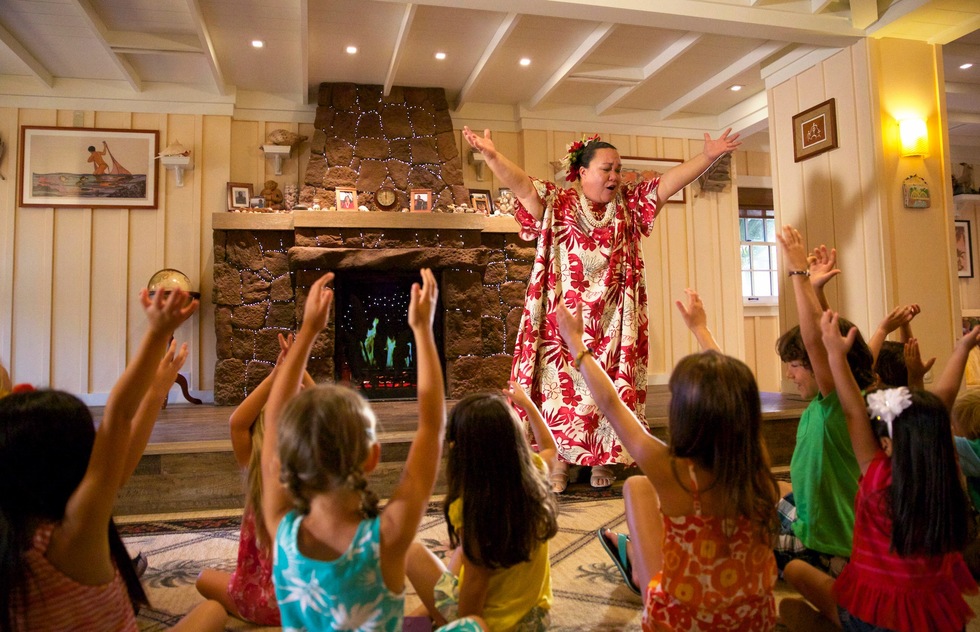 Disney
Aunty's Beach House
Kids' programs are free—as they should be at a resort that regularly charges more than $300 a night. Aunty's Beach House (actually at the bottom of a room tower, opening onto the pool area) is the huge, 5,200-square foot kids' club, full of bells and whistles and chaperones, that's aimed at kids age 3 to 12. Teens have their own Painted Sky Teen Spa area at another end of the resort. If your kids are under 3, there's no baby care for them, so if you've got very young children, consider that. 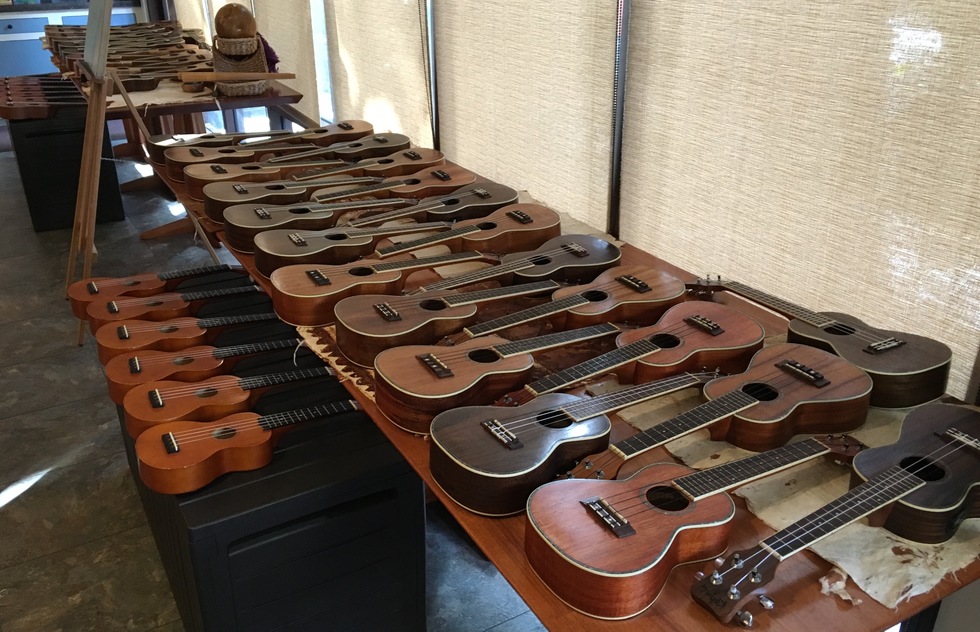 Jason Cochran
Pau Hana Room
Obviously, kids' activities is something Disney does extremely well, and it's a big reason why people choose Aulani. The day's schedule is always packed with free things to do—such as ukelele lessons for the entire family in the Pau Hana community room. Most costs nothing to join, and there's no hidden resort fee, but some activities that require specialized equipment (such as taking a "sailing canoe" out on the water or playing 18 holes of golf at a neighhoring course) are charged. 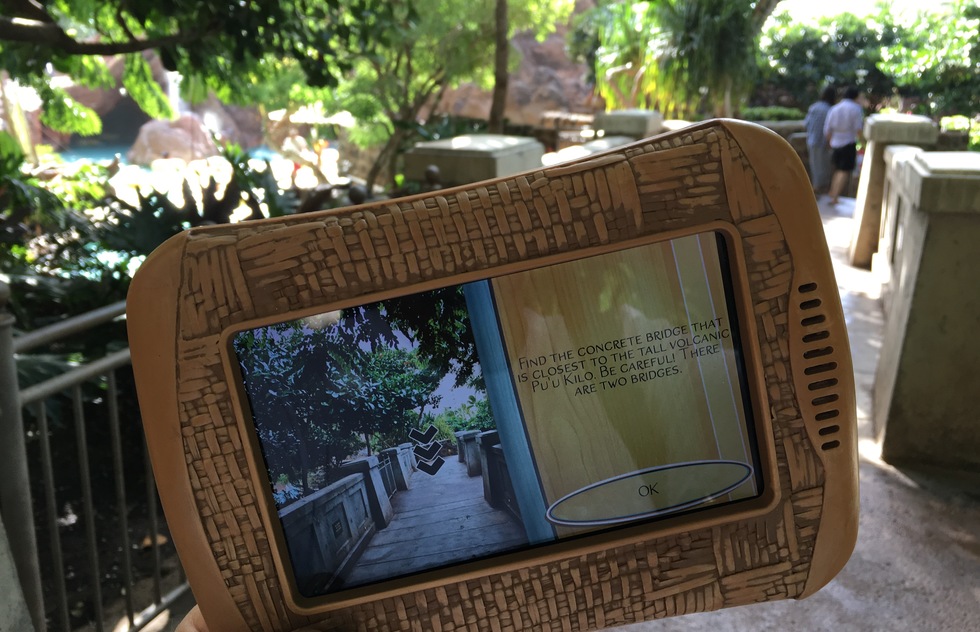 Jason Cochran
Menehune Adventure Trail
Another thing Disney does well: tricked-out themed environments. Grab a free tablet in the Pau Hana Room and set out on the self-guided Menehune Adventure Trail, a scavenger hunt aimed at small children. Tap the tablet at key moments, and something in the huge central garden that seemed inert will come alive with robotics, spurt water, or transform on command. If you've seen A Pirates Adventure: Treasures of the Seven Seas in the Magic Kingdom, you know the concept. It's not cheap to install games like these, and kids love playing them when they're tired of the pool. 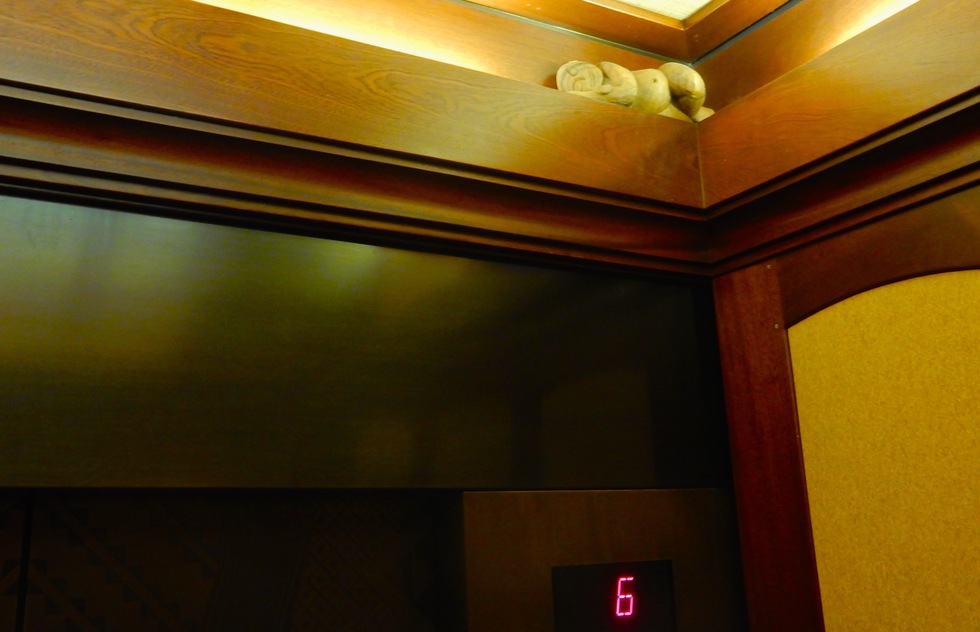 Jason Cochran
The Menehune
There are "Hidden Mickeys," of course—what would a Disney property be without little mouse ears hidden in the decor, waiting to be spotted?—but Aulani is also stocked with countless hidden Menehune, which are meant to represent leprechaun-like local craftspeople who come out at night to build and fix things. This one's hidden on a ledge in one of the elevators, but you'll find their faces popping up everywhere you don't expect them. 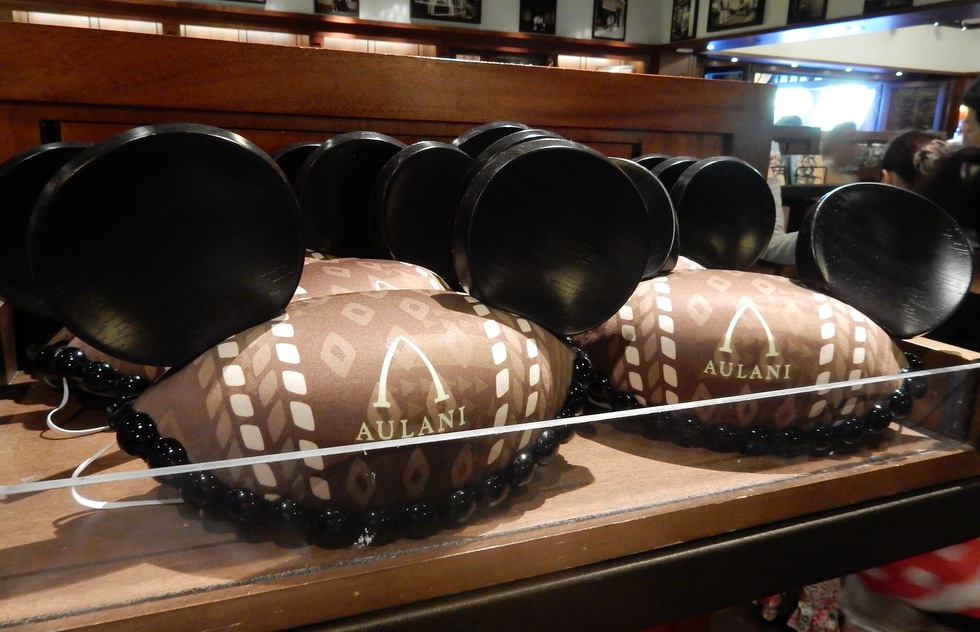 Jason Cochran
Souvenirs
You don't need to ask if there will be Aulani-specific souvenirs—Disney doesn't miss a trick, and of course there are plenty of Disney fans who belly up to the cash register to stock up on the stuff they can only buy here, like these mouse ear hats. 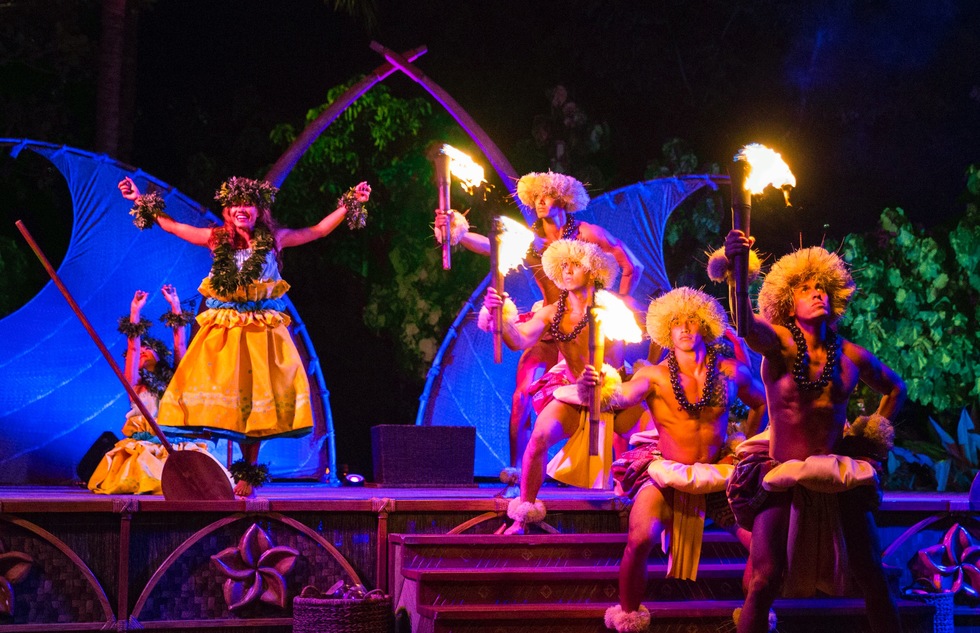 Disney
Starlit Hui
A few times a week on the lawn, the resort puts on a free, family-friendly Hawaiian show—gorgeous hula dancers, handsome Hawaiian boys, jovial duelling ukelele players, lots of colors and music. (You'll be sitting on the lawn but they'll lend you a mat.) The major beloved Disney characters politely wait until the cultural display has concluded to show up in Hawaiian garb and have a dance party under the stars with your children. The Starlit Hui generally happens only on two or three nights a week, and not on consecutive nights. On nights when the Hui isn't on, the hotel screens Disney films on the lawn instead. 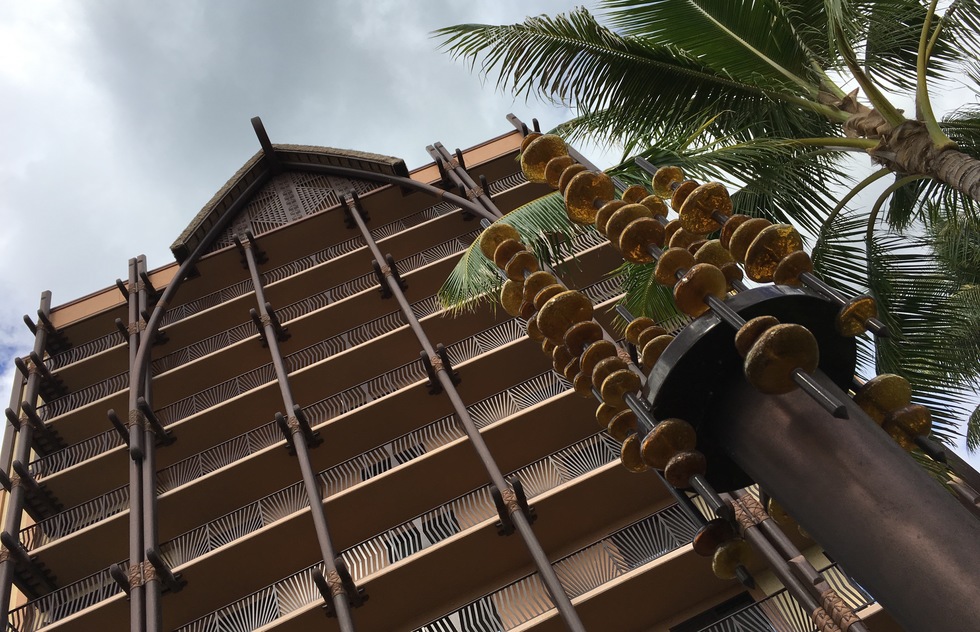 Jason Cochran
Aulani, a Disney Resort and Spa
Disney knows a lot about how to run a successful vacation entiity, and some people find its expertise justifies the higher expense of a Disney vacation. Aulani surprised us by being less of a Disney resort and actually just a well-run and fully programmed family resort. If you rent a car on Oahu, you'll be within easy driving distance to Honolulu and all its attractions and food as well as about 15 minutes from the Pearl Harbor historic area.

The official page for Aulani, a Disney Resort & Spa can be found by clicking here. Frommer's' has an entire book on what to see and do in Oahu and the rest of Hawaii, which you can find in the Frommer's Store.
Beach & Water Sports
Family & Kids
Hotels