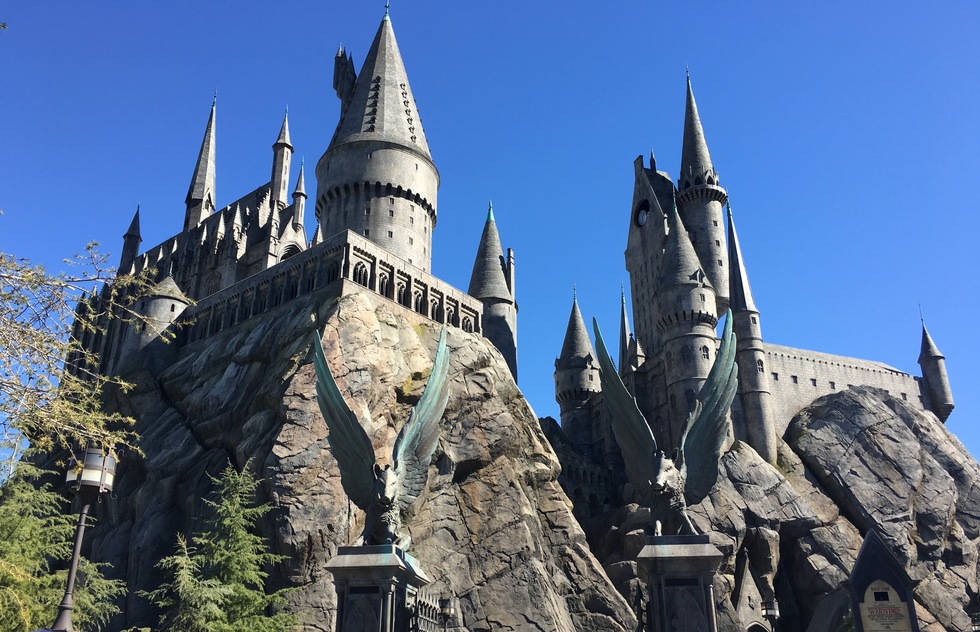 The New Wizarding World of Harry Potter in Hollywood—In Pictures

By Jason Cochran
It's the amusement park franchise that created a blockbuster in Orlando—and now there's a West Coast version, too. Universal Studios Hollywood, the theme park that grew out of one of America's oldest operating movie studios, has constructed its own version of The Wizarding World of Harry Potter, complete with Butterbeer, bespoke souvenirs, and multimillion-dollar rides. We were among the first guests to walk in the shadow of Hogwarts Castle again—have a look at the new Wizarding World of Harry Potter. 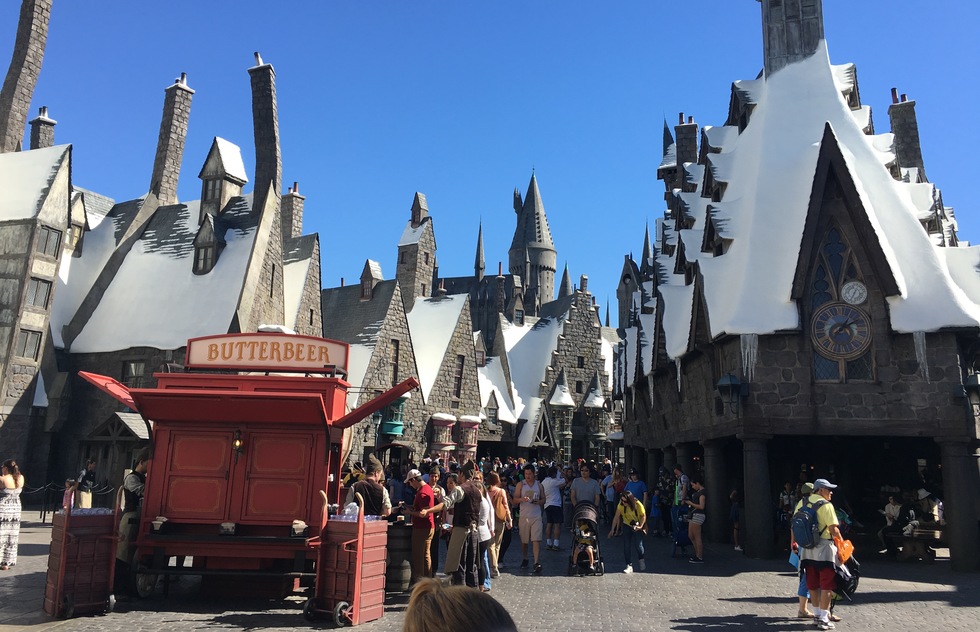 Jason Cochran
Hogsmeade Village
Hollywood's Wizarding World represents the village of Hogsmeade, which lies beneath Hogwarts School of Witchcraft and Wizardry and serves the students who attend it. There's a main drag of shops and food—pop into the little stores for souvenirs straight out of J.K. Rowling's books—that culminates in a spectacular ride housed inside Hogwarts Castle.

In most respects, this Wizarding World is a near-facsimile of the original that opened in Orlando in 2010. In 2014, the Universal in Orlando got a second area, Diagon Alley, but the Los Angeles Wizarding World focuses only on Hogsmeade, the first half of Florida's version. Fortunately, it's alike in nearly every way. 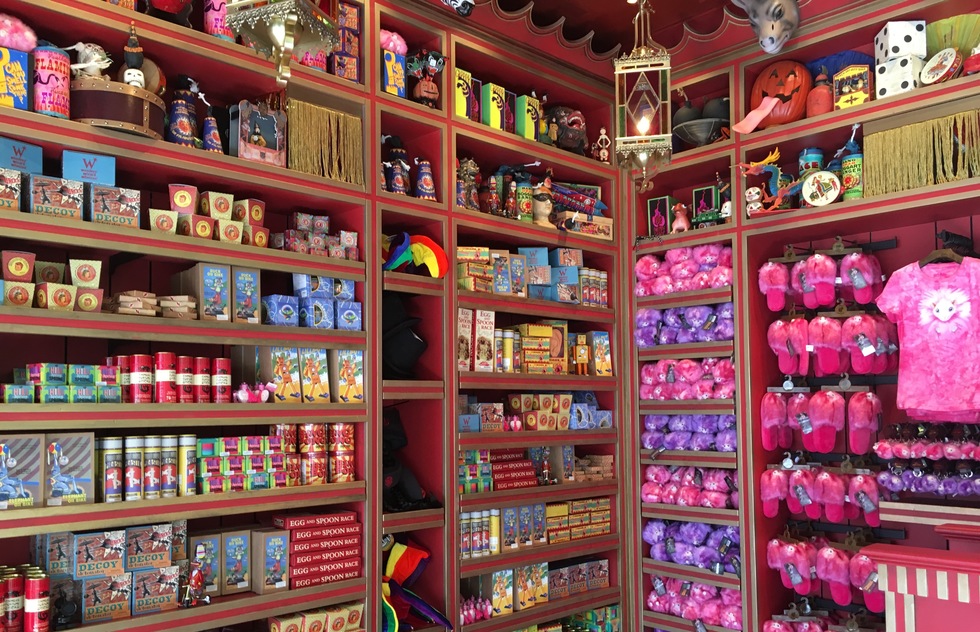 Jason Cochran
Zonko's Joke Shop
Just like the village of Hogsmeade in the books and movies, there's a Zonko's Joke Shop. The merchandise seems like it sprang from the pages of the books—Chinese Fortune Sticks, Pik-a-Stiks, tin toys, and fluffy Pygmy Puffs for pets. If you buy one of those, a clerk will ring a giant bell proclaiming the new adoption to the entire shop. In Orlando, Zonko's closed when Diagon Alley opened, but at the L.A. Harry Potter land, it endures. 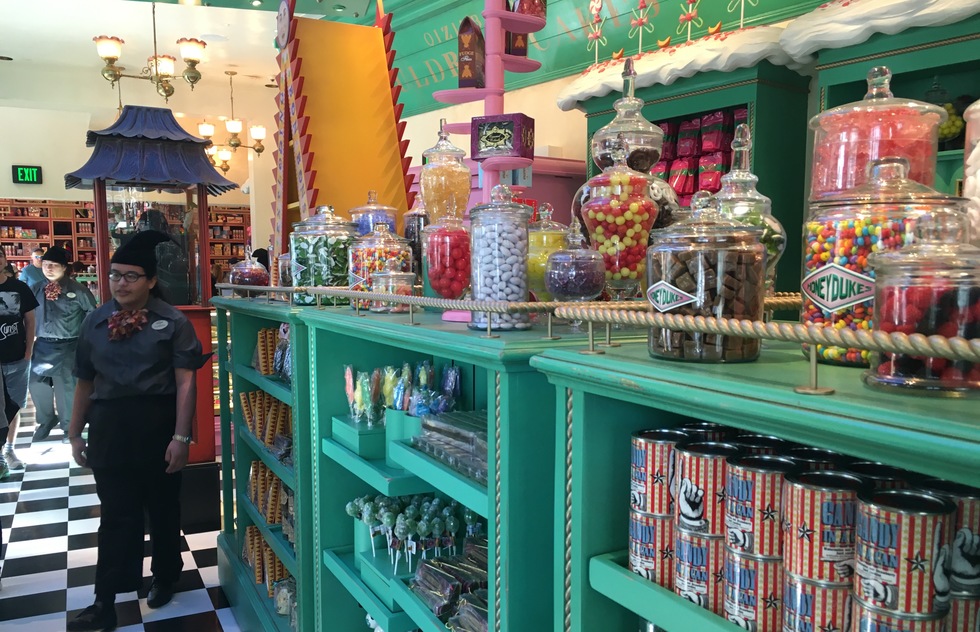 Jason Cochran
Honeyduke's
Honeyduke's, the popular candy shop, is well-stocked with Rowling inventions as Chocolate Frogs, Fudge Flies, and Fizzing Whizzbees. Don't miss that Wizarding World favorite, Bertie Bott's Every-Flavour Beans, which are jellybeans that taunt the tongue by looking delicious but occasionally sneaking in a bean that tastes awful. Rowling personally approves everything that goes on sale in the Wizarding World, and the souvenirs for sale here match the ones sold in Florida. 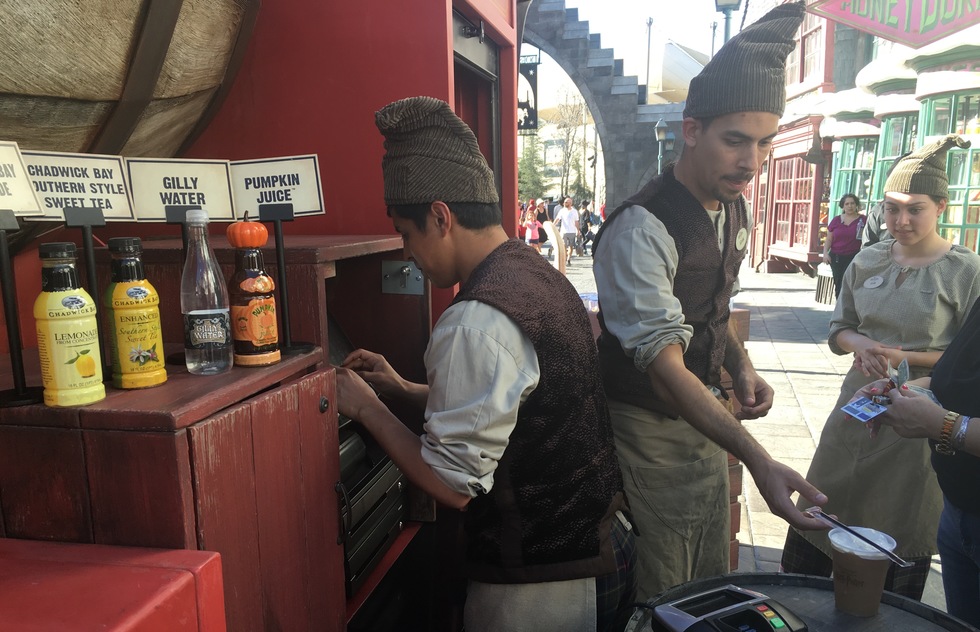 Jason Cochran
Butterbeer
Is there Butterbeer? Boy, is there—in several carts and in the restaurant. You can get it either cold or frozen, either with a marshmallowy foam topping or without. It's a delicacy you can only buy at a Wizarding World or on the tour of the movies' filming location at Warner Bros. near London. The best way to describe its flavor is like a butterscotch Life Saver, and although it's sweet, in truth there's about as much sugar in a can of Coke: 200 calories, 3.5 grams of fat, no protein, 29 grams of sugar, and 42 grams of carbs. (There's no nutrition label at Universal—but that's what you're drinking.) There's also Gilly Water (which is actually just water) and Pumpkin Juice (which has more in common with apple juice). 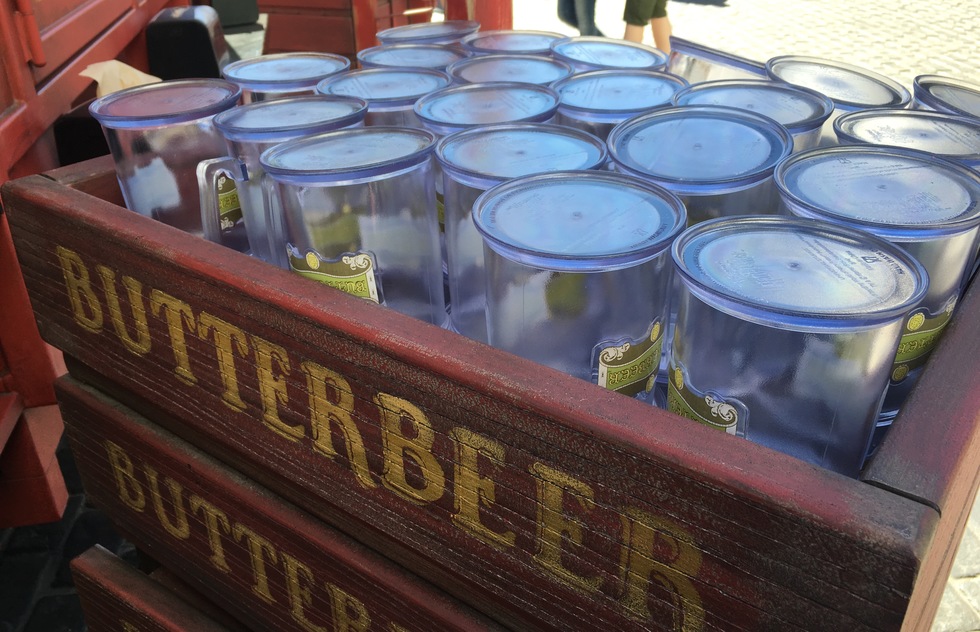 Jason Cochran
Butterbeer souvenir mugs
A plastic cup of Butterbeer is about $6, and if you want it in a souvenir mug, double that. It's the same collectible mug you'd get at Hogsmeade in Orlando, but stay tuned, because over time, the Orlando Wizarding World has increased its mug options to meet collector demand, so Hollywood might, too. 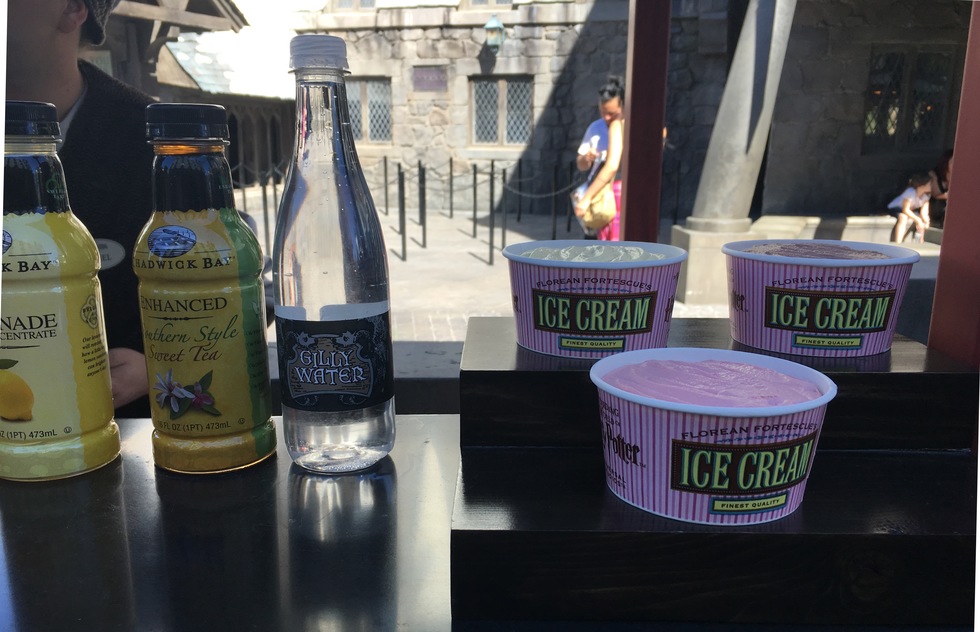 Jason Cochran
Fortescue's ice cream
The big sensation at Orlando's Diagon Alley is Florean Fortescue's Ice Cream Parlour. In Hollywood, you can buy cups of it at street kiosks. Why no shop? Because in the books, Fortescue's is only located in Diagon Alley, which is supposedly in London, not in Hogsmeade. Here, it has to be pre-packed and shipped in for the students. It's a slight cheat, but worth it for flavors like Chocolate Chili. 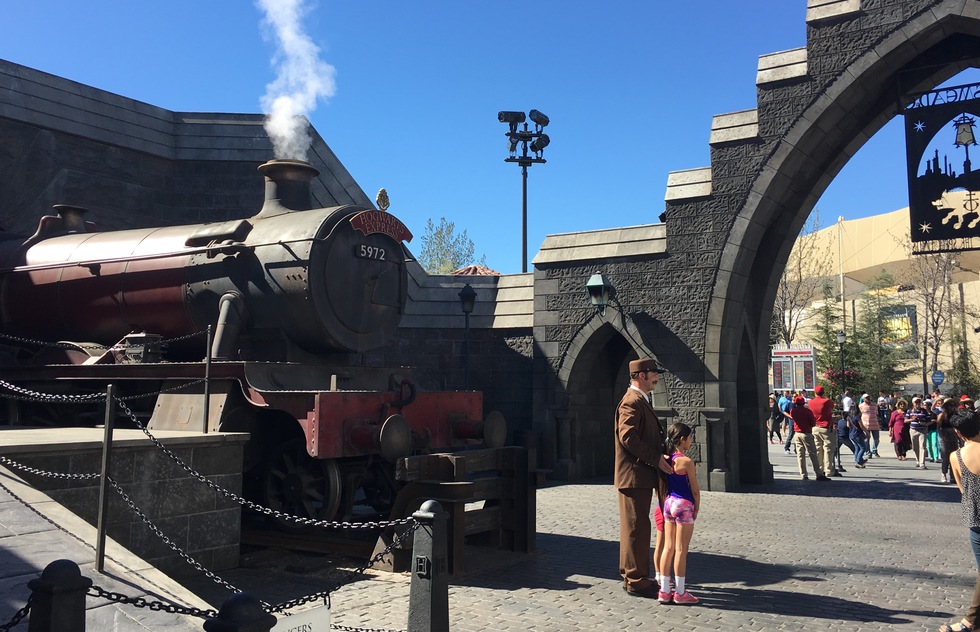 Jason Cochran
Hogwarts Express
As with Orlando's Hogsmeade, the Hogwarts Express train that stands inside the town's gate is a prop—but an impressive one. 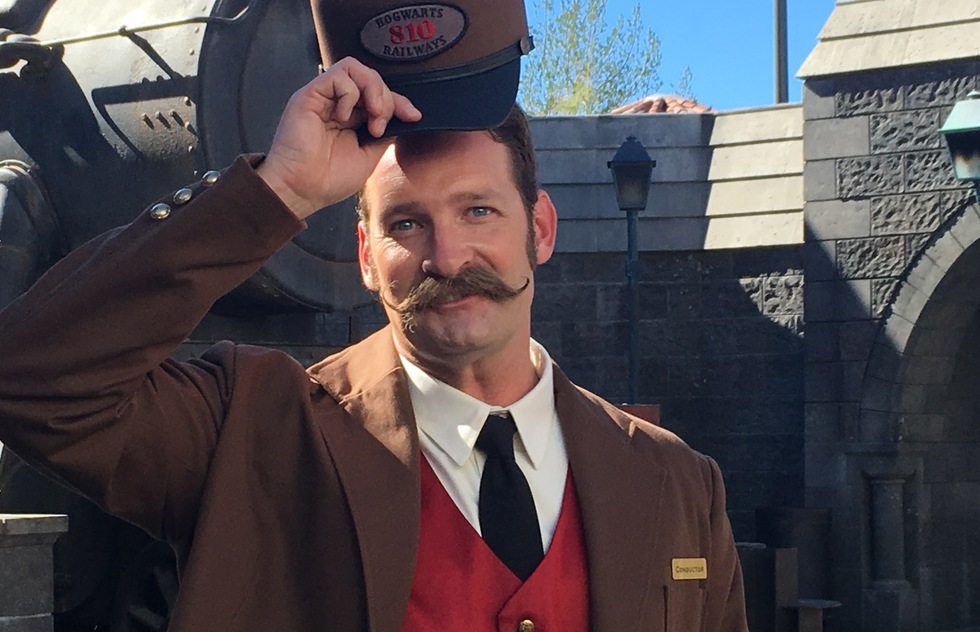 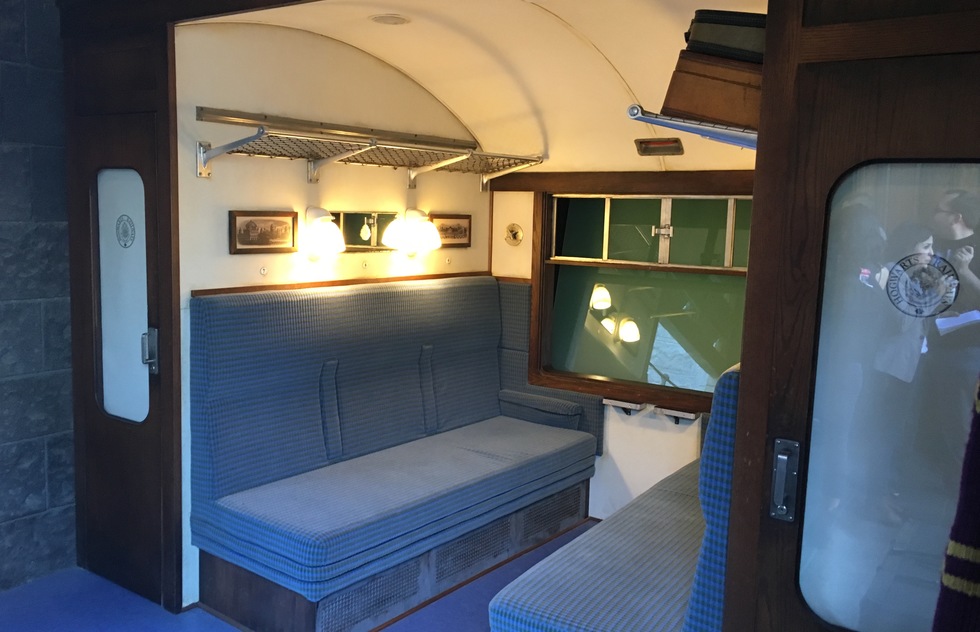 Jason Cochran
Hogwarts Express Photo Opportunity
In the station house beside the train, you'll find the Hogwarts Express Photo Opportunity, which is a re-creation of the train carriage the students take to school—an attraction that you won't find in Orlando. Have a seat and a photographer will take a shot of you on the Express. If you think it looks exactly like it did in the movies, you're not wrong—the luggage rack is the same one used on set. You have to pay extra for this souvenir—you can't simply take your own selfies in here. 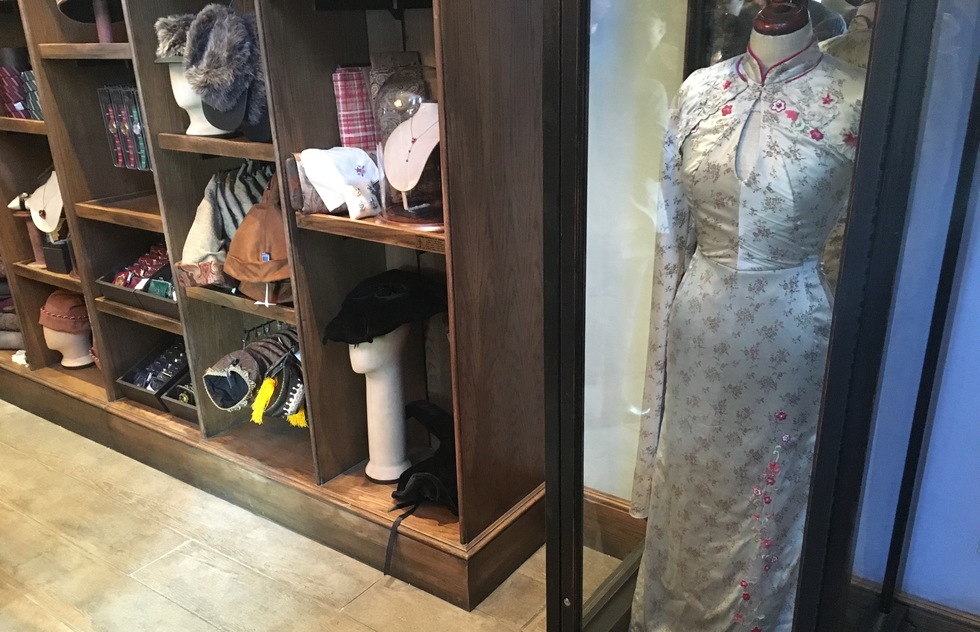 Jason Cochran
Used in the films
Here's another thing from the movies: a dress worn by the character Cho Chang, who dated both Cedric Diggory and Harry Potter in the movies. It's not marked—the creators of the Wizarding World love inside secrets, so you just have to know. You'll find this one in Gladrags Wizardwear, which is attached to the Dervish and Banges shop for school supplies. 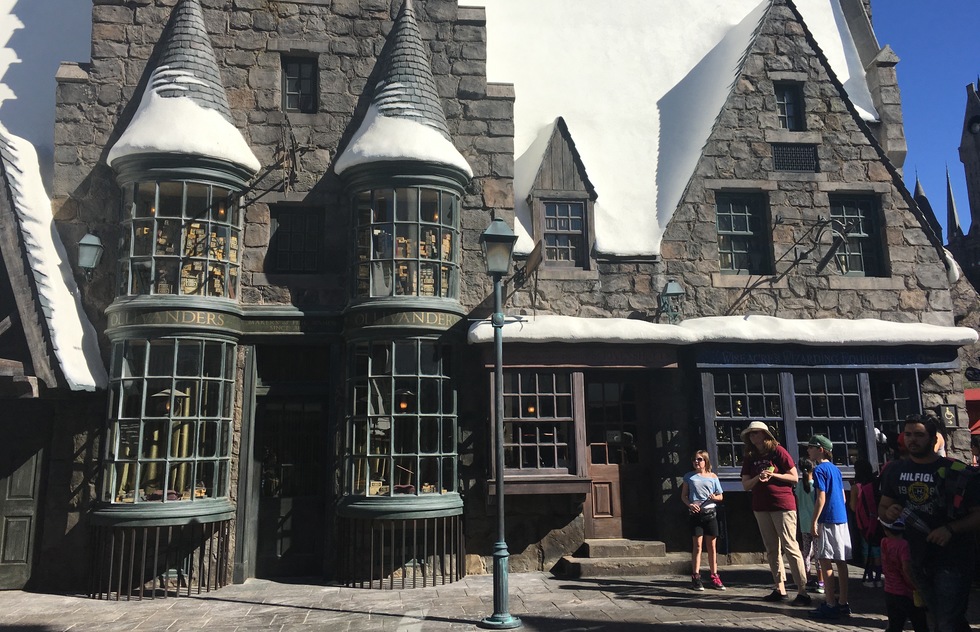 Jason Cochran
Ollivanders
One big change from Orlando's layout is the relocation of Ollivander's wand shop across the street from its cramped placement in Florida. Here, visitors enjoy a brief "wand selection" moment in a room stacked floor to rafters with boxes of magic wands, and then shop for wands of their own. There's a different wand for each character in the series no matter how seemingly trivial, and they can be purchased for $40 to $47. The wands turned out to be a huge cash cow for Universal, so now they have more trading space. 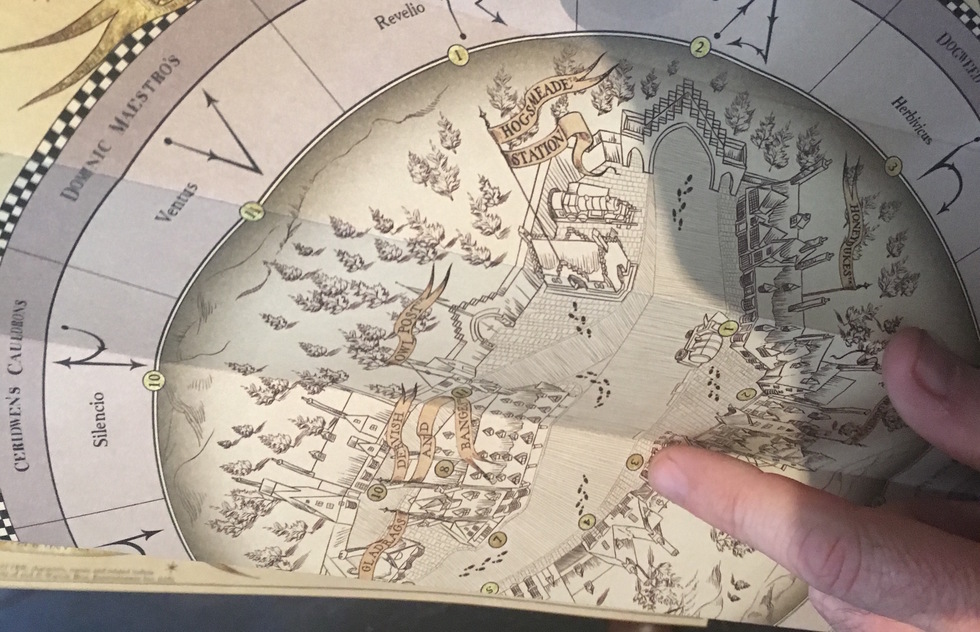 Jason Cochran
Spells
The more expensive wands are "interactive," which is like a Harry Potter version of a shooting gallery: There are spots throughout the land where you can wave an interactive wand to activate a fun trick—for example, in the window of Honeyduke's, a Chocolate Frog appears. When you buy one, it comes with a map to all the spots. There are 11 sprinkled throughout this Wizarding World. 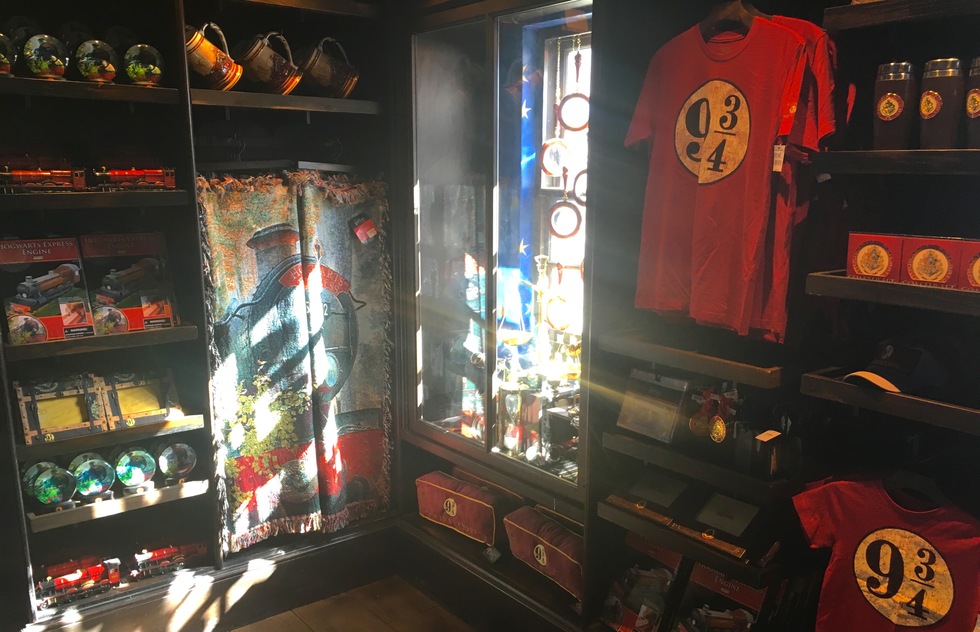 Jason Cochran
Wiseacre's Wizarding Equipment
The only souvenirs that don't seem like they're part of the fabric of their shop are the ones in the one-room Wiseacre's Wizarding Equipment, which is attached to Ollivanders. It, too, is actually a Diagon Alley store, not that it makes much of a difference to the casual visitor. Here, the purchases are a bit more of your world than of Harry's, including "Platform 9 3/4" tee shirts, Hogwarts Express throw rugs, and coffee mugs bearing the Deathly Hallows symbol. 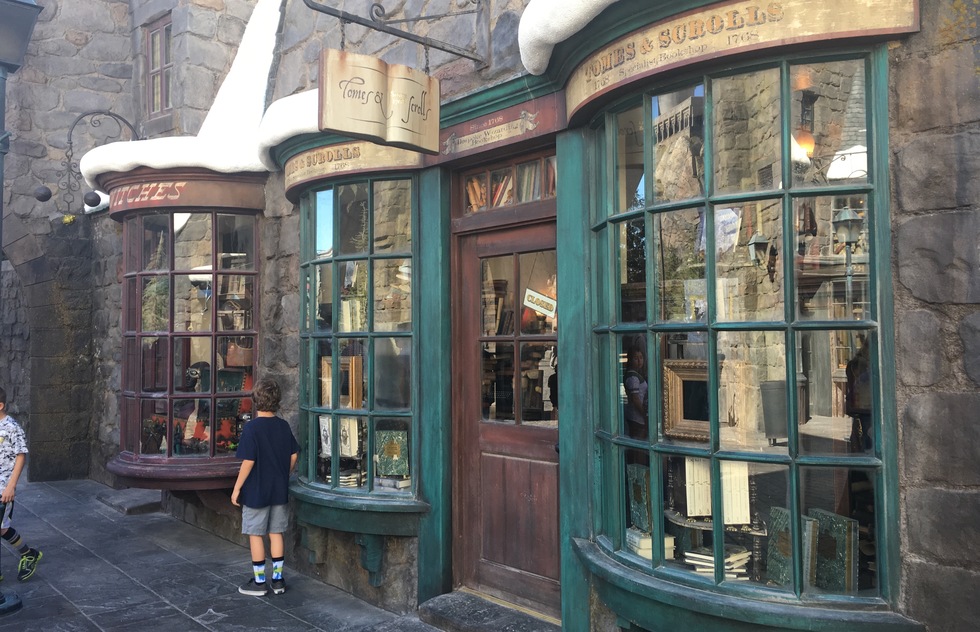 Jason Cochran
Tomes and Scrolls
Some of the storefronts are just dressing, but they don't skimp, and the windows are just as full of surprises as they are in Florida. Look carefully in the ones at Tomes and Scrolls and you'll see movies of Kenneth Branagh selling his boastful volumes as his character, Gilderoy Lockhart (just as he does in Hogsmeade in Orlando).

Here, it pays to take time to notice details, whether it's hand-painted lichen on the walls or false owl poop streaking the ground. Also don't neglect the bathrooms—the "Boys" and "Girls" rooms: The toilets are outfitted with antique-looking water closets and the unseen ghost of Moaning Myrtle complains to all those who venture inside. 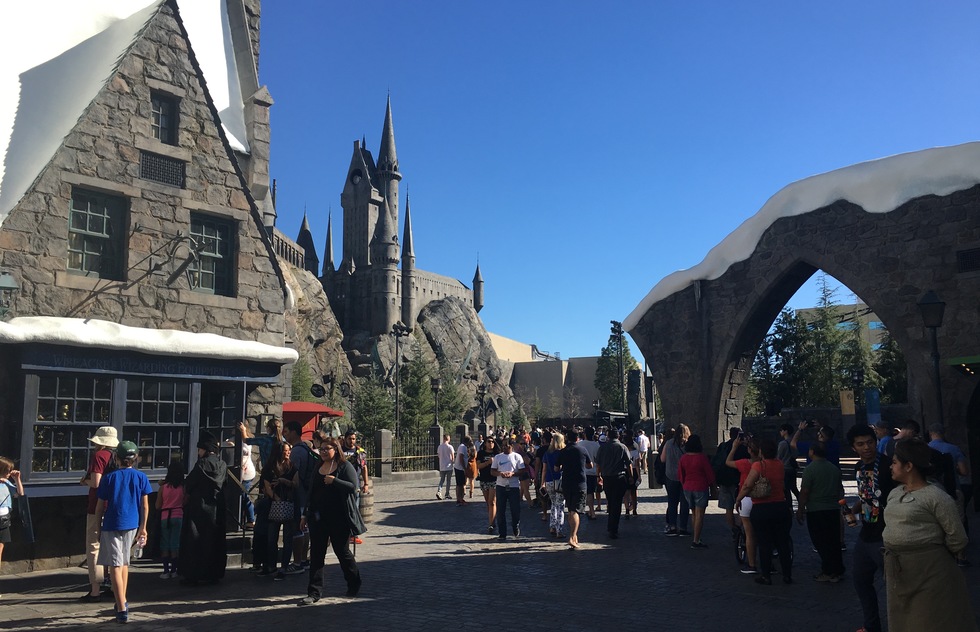 Jason Cochran
Hogwarts Castle
Now you're at the end of the lane and the Castle gets its big reveal. A chunk of the old medieval town wall helps draw your eye toward Hogwarts, which soars high in forced persepctive. 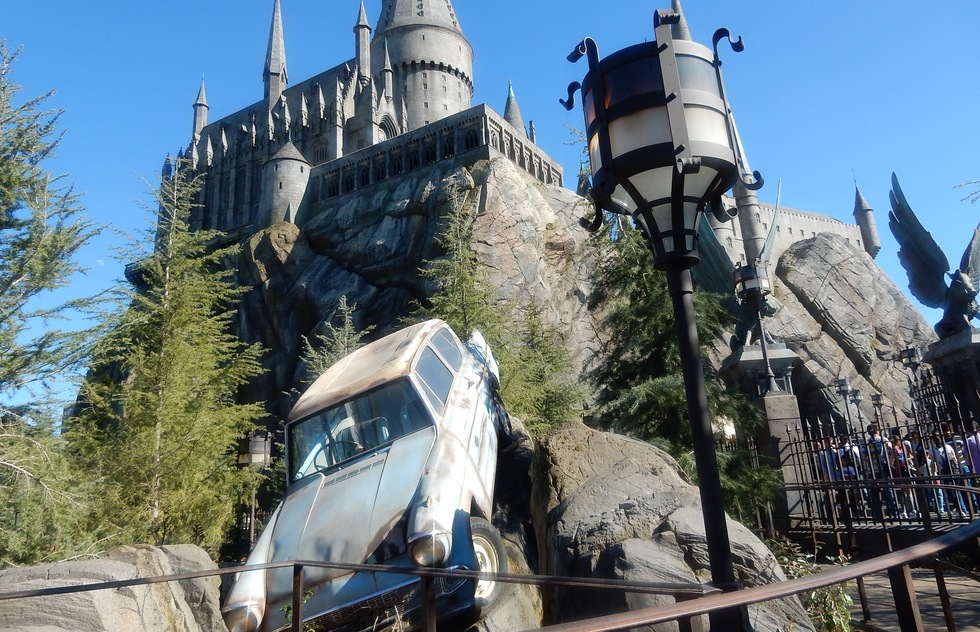 Jason Cochran
Harry Potter and the Forbidden Journey
To the untrained eye, the main ride, Harry Potter and the Forbidden Journey, strikes the same notes as its forebear: the queue (worth a visit for its own sake) winds through the greenhouse and classrooms of Hogwarts, the paintings still come alive and talk to you, and the ride is still an over-the-top tour de force of theme park technology. You still have to store all loose items in free lockers and there's a single rider line.

While you're in the Greenhouse area, you'll be overlooking the entrance to Universal Studios' famous backlot tram tour—that, and the California mountains in the distance, sometimes come as jarring reminders that all this is thanks to Hollywood magic. 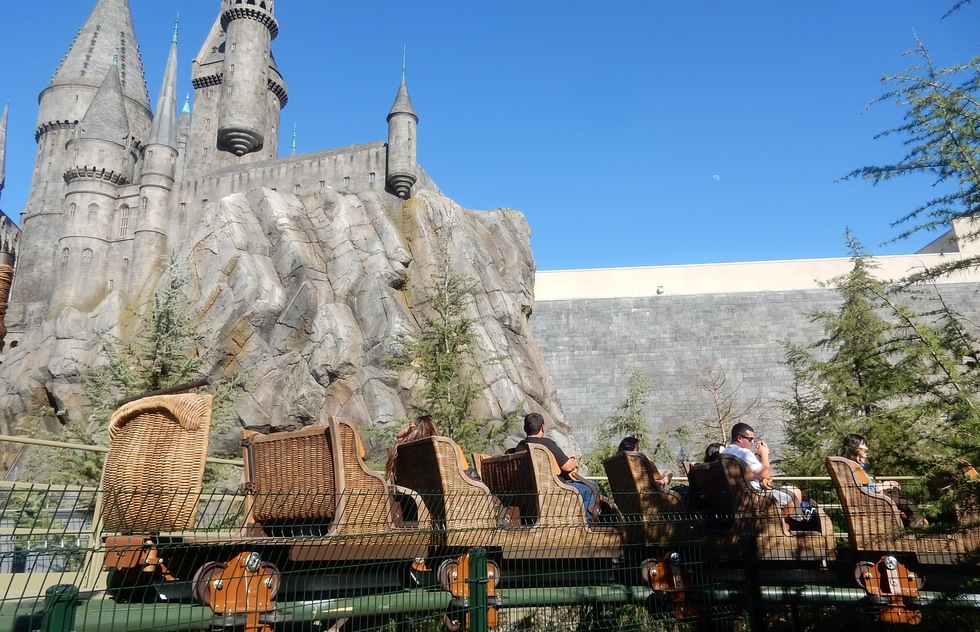 Jason Cochran
Flight of the Hippogriff
This outdoor "junior coaster" has a height minimum of only 39 inches and its easy swooping motions are over in less than a minute. It's easy for kids. 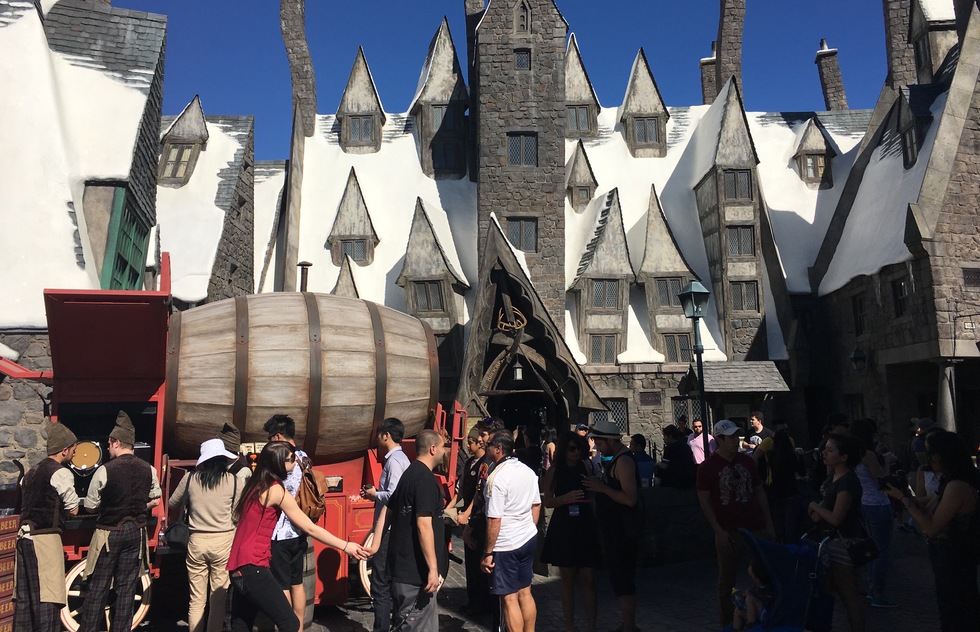 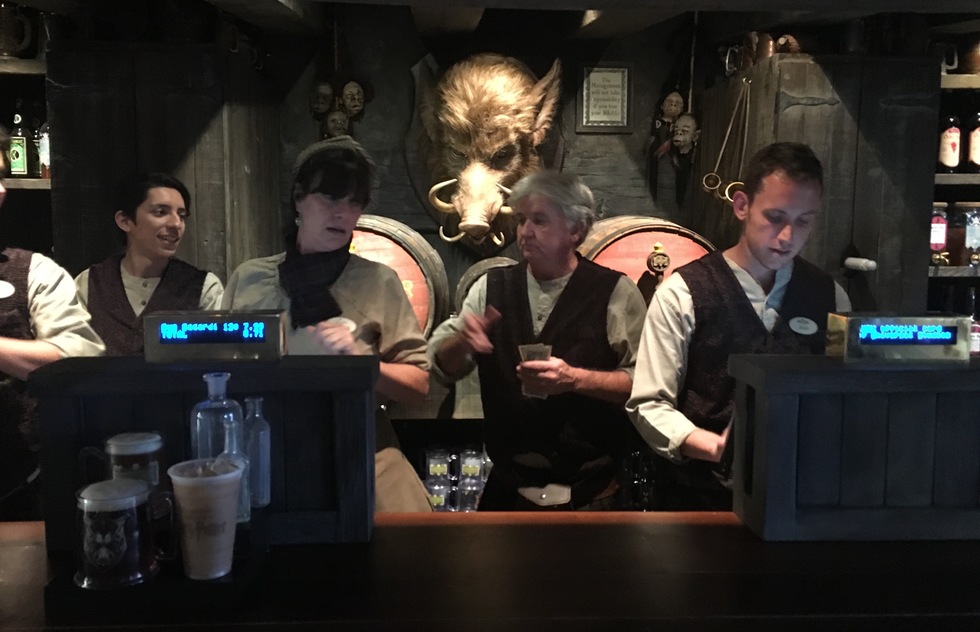 Jason Cochran
Hog's Head Pub
Attached to Three Broomsticks, it's your only option for booze. You can order both beers that you know and three only-in-Wizarding World options: Hog's Head (an ale), Dragon Scale (a lager), and Wizard's Brew (a stout). Warning: The mounted hog's head may not be quite dead yet. Second warning: You may not add rum to Butterbeer. 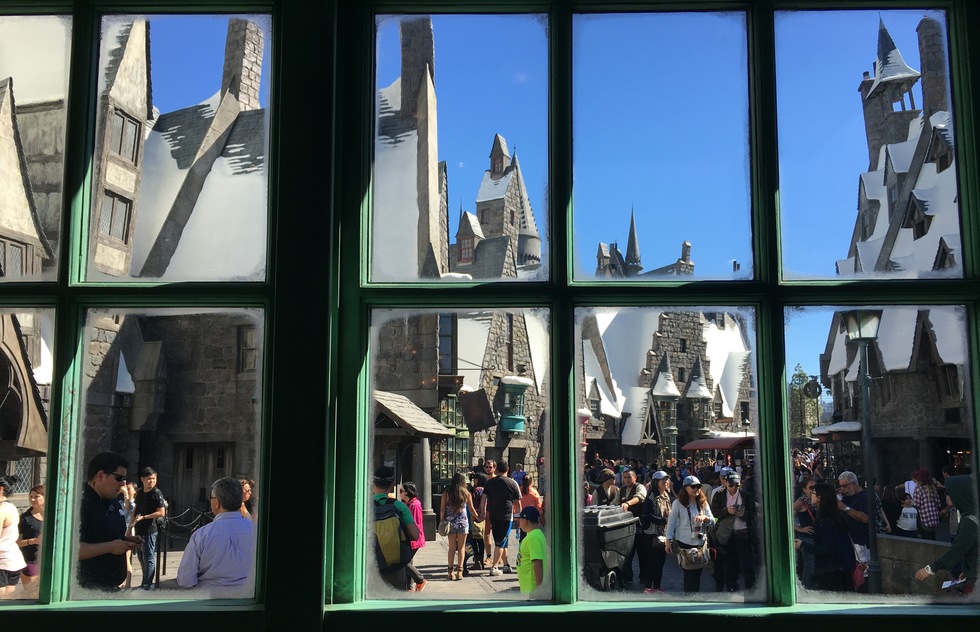 Jason Cochran
The Wizarding World of Harry Potter at Universal Studios Hollywood
Best of all, this version of The Wizarding World of Harry Potter can cost less to see than the one in Orlando—if you buy tickets ahead of time on Universal's website, you'll find tickets are cheaper on days that are predicted to be less busy.
Family & Kids
Photography
Theme Park