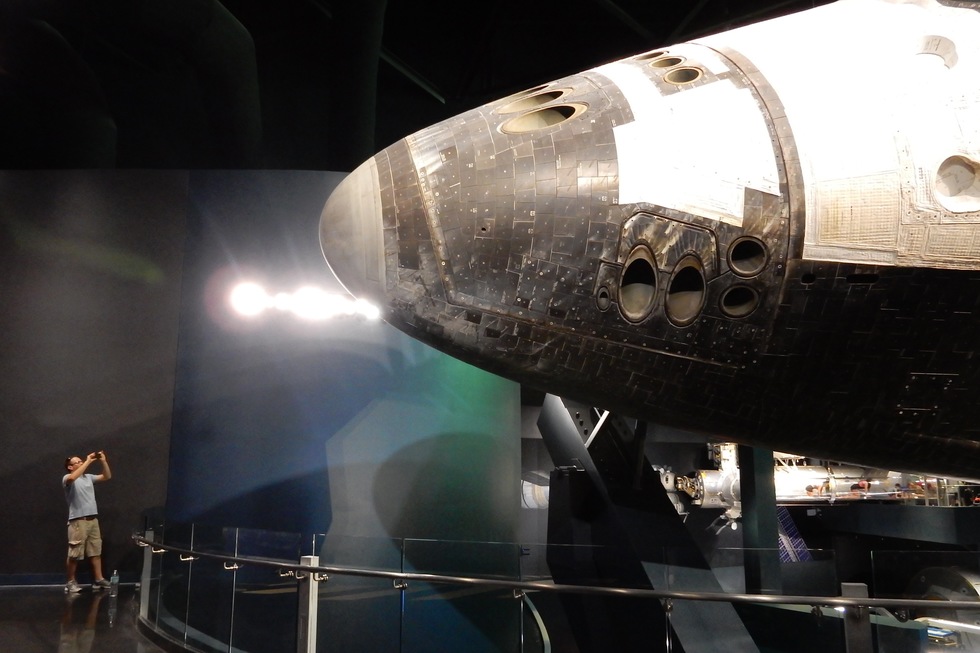 By Jason Cochran
Disney and Universal work very hard to convince customers to forgo rental cars, remain on their properties, buy tickets for every day of their stay in town, and never leave. What a shame! Look what you're missing if you take that bait. 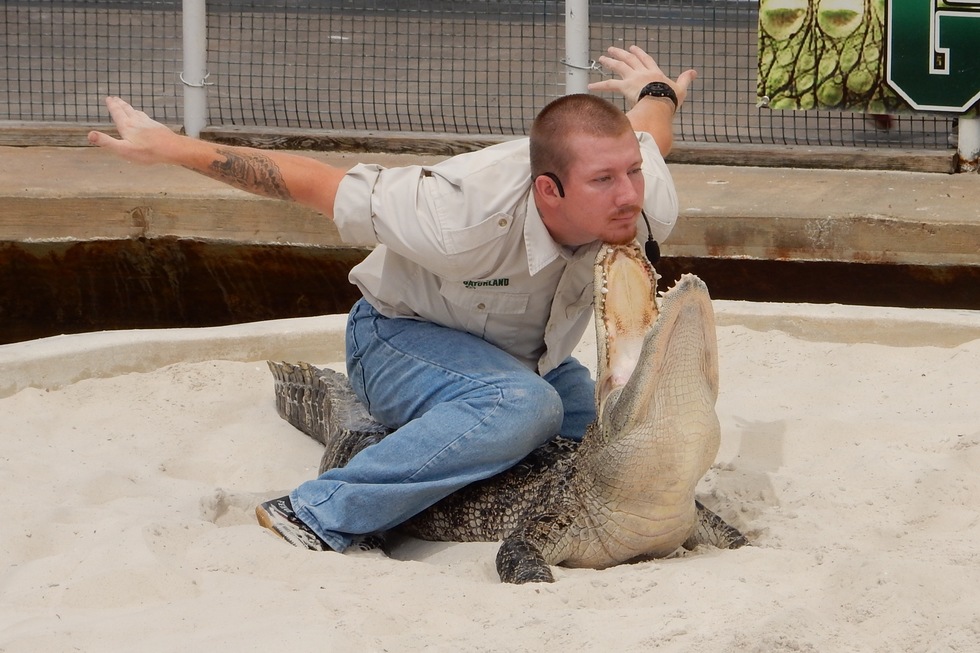 Jason Cochran
Gatorland
Not so long ago, Orlando was untamed swampland, and even in the first decade of Walt Disney World's existence, as visitors drove in they would pass dozens of alligators sunning themselves by the side of the roads. Gatorland, founded way back in 1949, is where you'll find tons of the reptiles teeming in huge habitats—plus birds, snakes, ziplines, and other diversions that hark from Central Florida's simpler time. They'll let your kid straddle a gator for a photo op. It's a visceral vacation experience—don't fret, though, because its mouth will be taped shut. This guy's a professional handler. 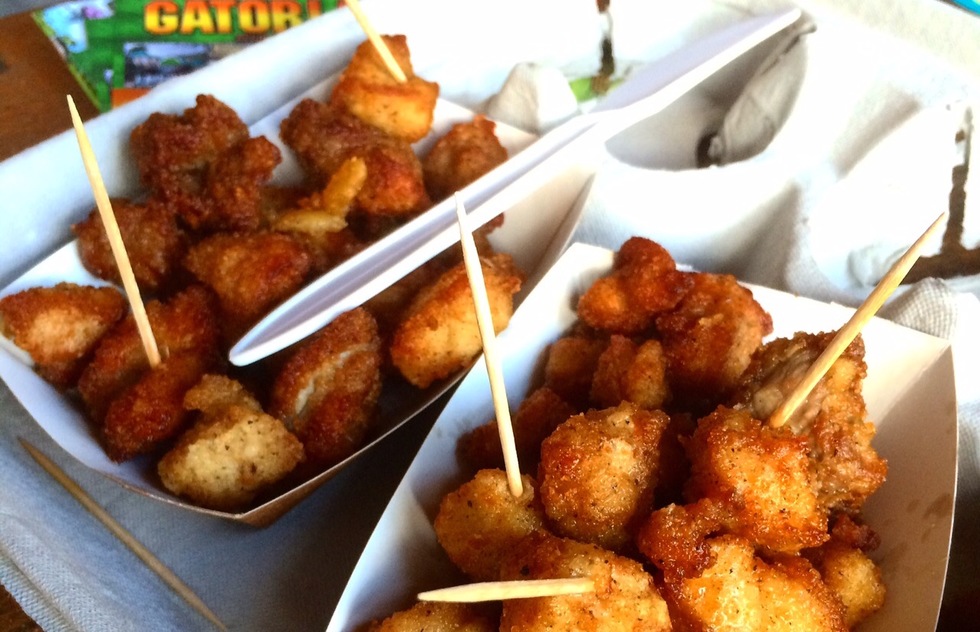 Jason Cochran
Gator bites
It's legal to eat alligator, and at Gatorland, they serve them as nuggets, so when your friend asks how your trip to Orlando was, you can tell 'em you ate reptile chunks. They do not taste like chicken—they taste like swamp lizard. 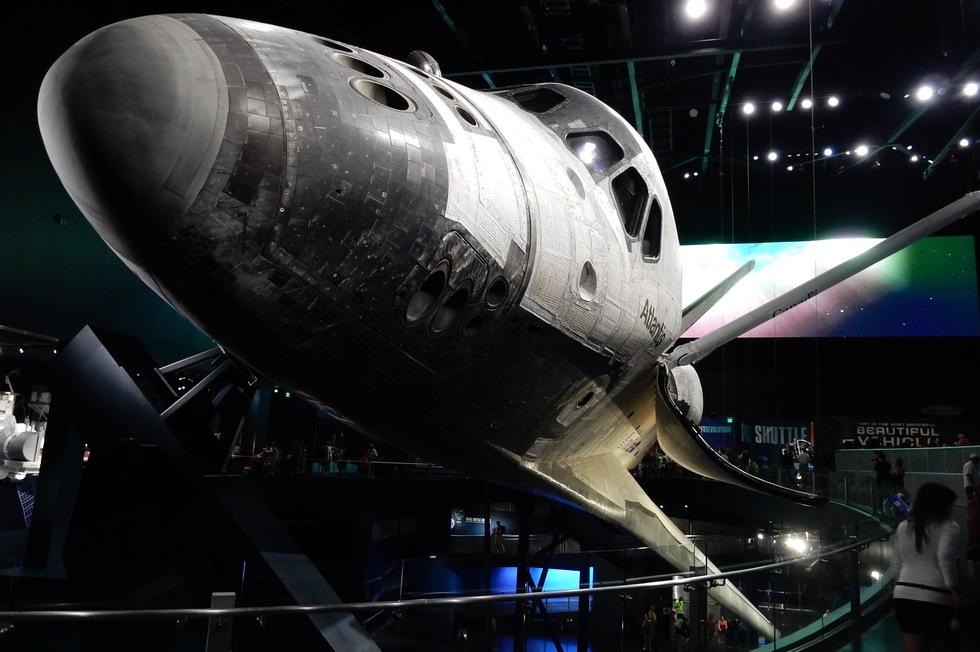 Jason Cochran
Space shuttle Atlantis
Decomissioned space shuttles went to New York, Los Angeles, and Houston, but the best and most elaborate presentation of any of them, by a light year, is in the theatrical $100 facility commissioned for the Atlantis at Kennedy Space Center. Look closely and you can see it's still coated in space dust. The hall is bustling with interactive exhibition and systems demonstrations, and you can cap a visit with a ride in the 44-passenger Shuttle Launch Experience simluator, which brilliantly approximates the sensations of a launch without making you feel sick. 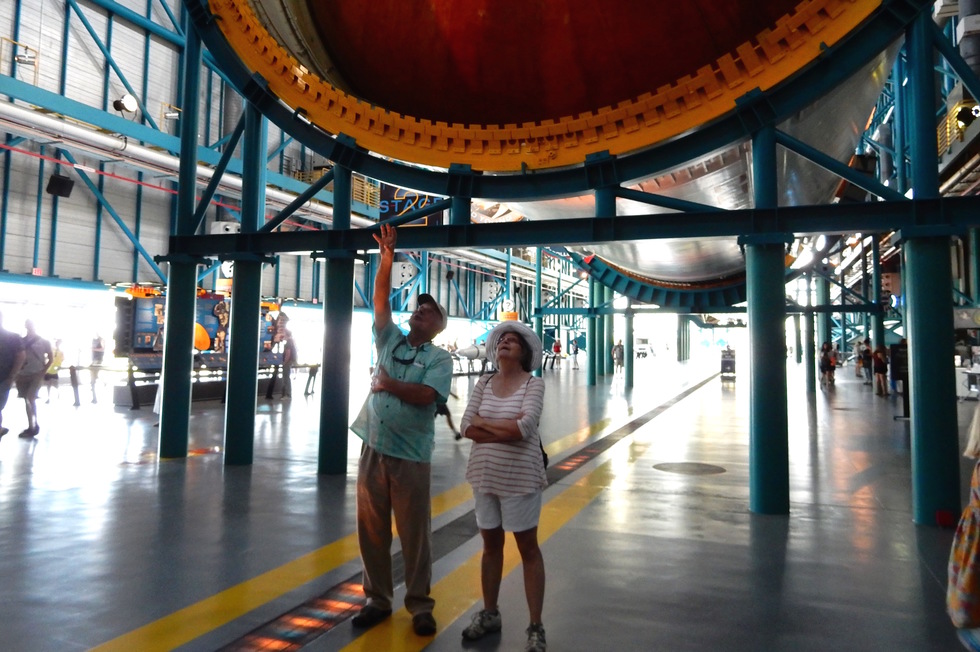 Jason Cochran
Saturn V rocket at KSC
America sent people to space from Central Florida. So while you're at Kennedy Space Center, you must take the included shuttle bus to see the Saturn V rocket, which is so big (30 stories tall) it has to be displayed on it side in a massive custom-built warehouse. You'll also see an actual moon rock, spacesuits with visors made of real gold, the original Mercury mission control center, and the next generation of rocket, SLS, under construction. Repeat: America sent people to space from here, over and over and over, and it's preparing new missions right now—and everything is on display today! If, even in light of that, the Dumbo ride seems more amazing to you, we don't know what to tell you. 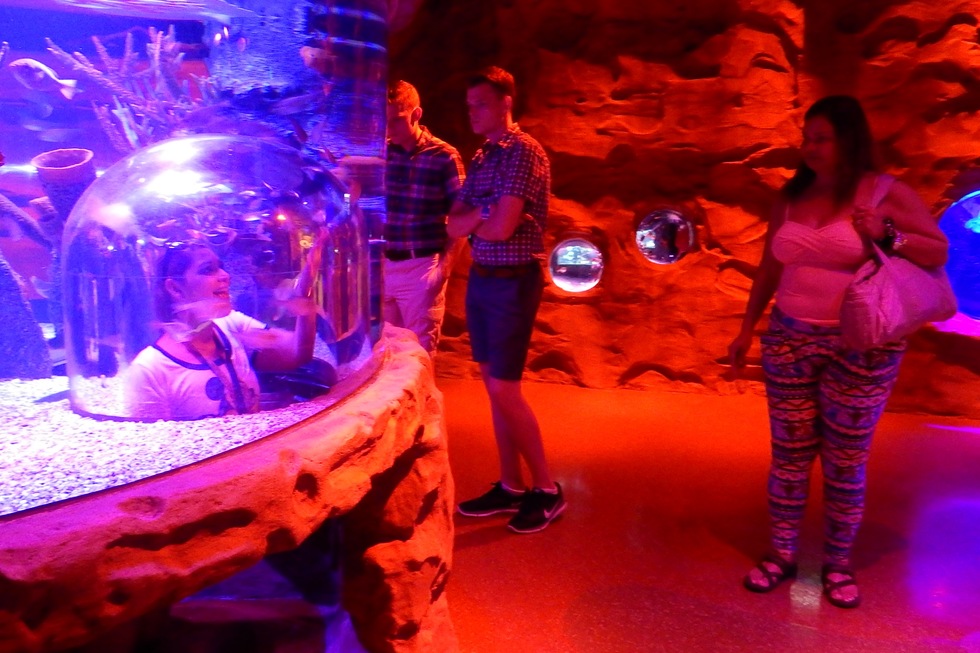 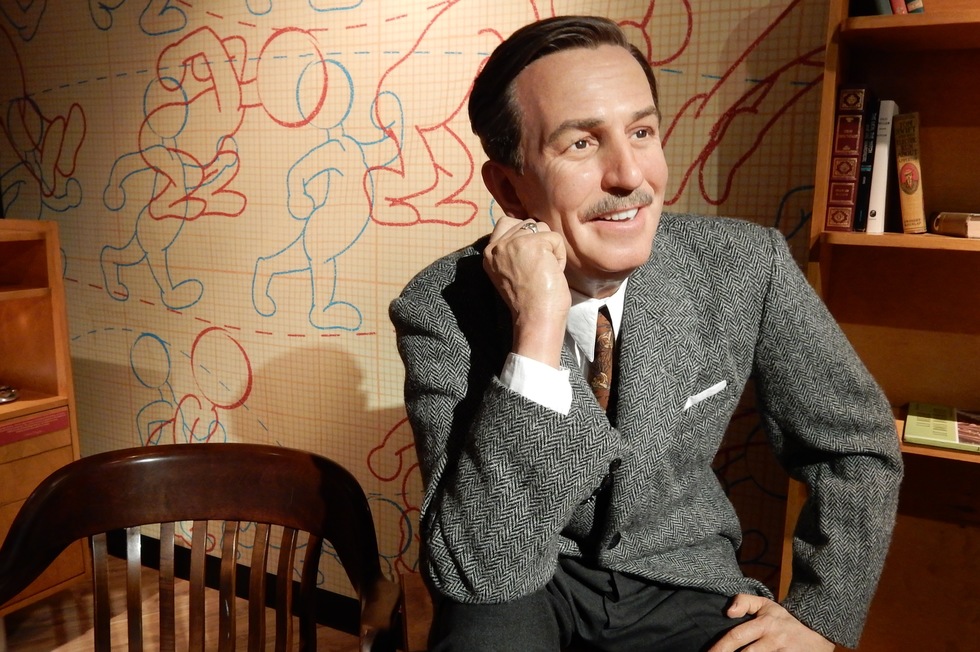 Jason Cochran
Madame Tussauds
Next to SeaLife Aquarium is Orlando's very own Tussauds wax museum (opened 2015), stocked with celebrities, world figures, and this guy named Walt, whose bright idea turned Orlando into the kind of place where a wax museum would thrive. As all all Madame Tussauds, you're free to wander among the lifelife figures, take photos with them, and even touch them if you want. 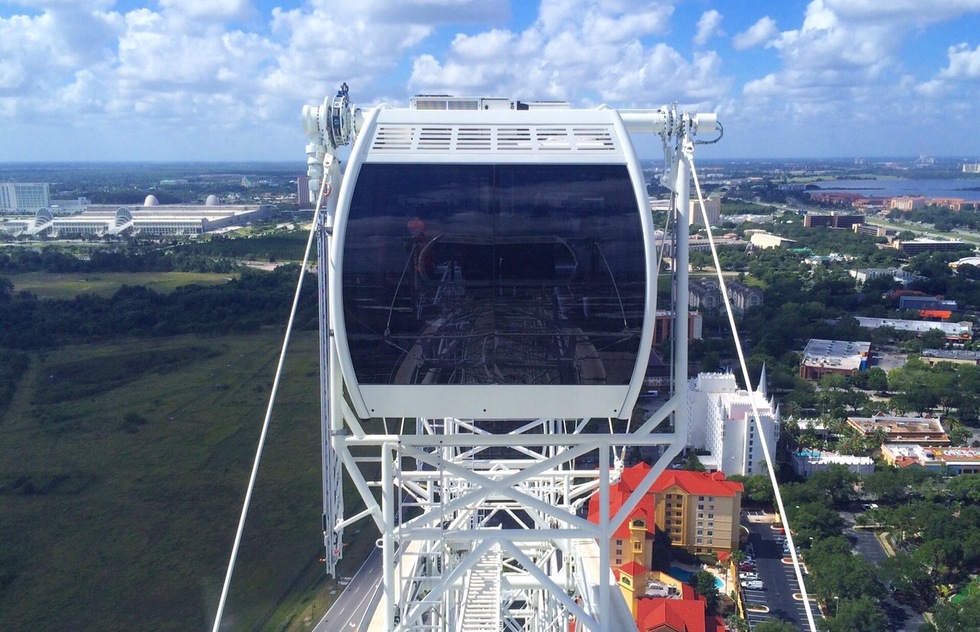 Jason Cochran
The Orlando Eye
The tallest observational wheel on the East Coast (400 feet) creeps along at only 1 mph for tourists' long-distance viewing pleasure. It takes 30 minutes and the 15-passenger pods are air-conditioned. It's owned by the same company that runs SeaLife Aquarium and Madame Tussauds, so you can see them all together on the same visit. 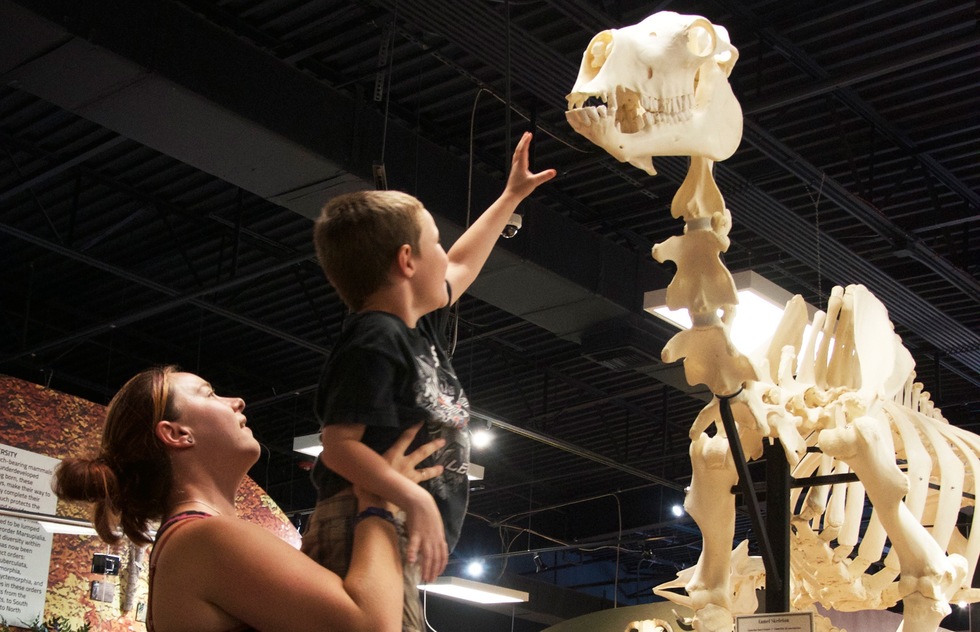 Skulls Unlimited International, LLC
Skeletons: Animals Unveiled
Four hundred animal skeletons, each one painstakingly prepared and displayed in detailed habitats. This export from Oklahoma City, where it was a smash concept, is far more thoughtful and diverse than you might imagine, and it's in the same complex as the Eye, Madames Tussauds, and SeaLife. 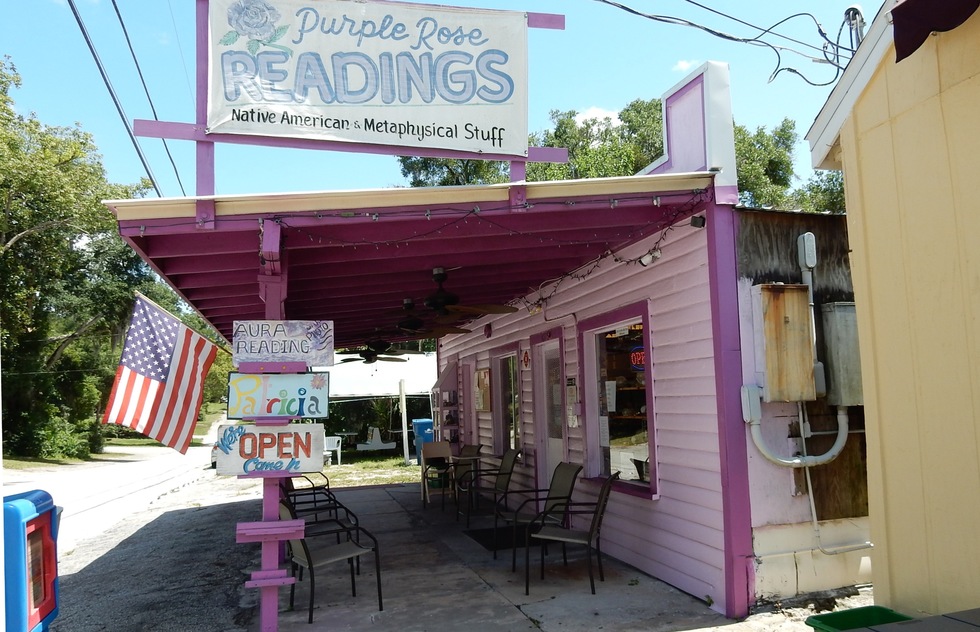 Jason Cochran
Cassadaga
This tiny Florida hamlet was established in 1875 as a haven for psychics and mediums; it's an offshoot of the famous Lily Dale in upstate New York . You can't live in Cassadaga without being an accredited spiritualist, and they welcome visitors for cheap readings and healing sessions. There's even a haunted hotel from 1928 with a creaking wooden verandah. Even if you don't believe in the world of psychics, this is one of the most fascinating communities in the country. The town is a 45-minute drive north of Disney. 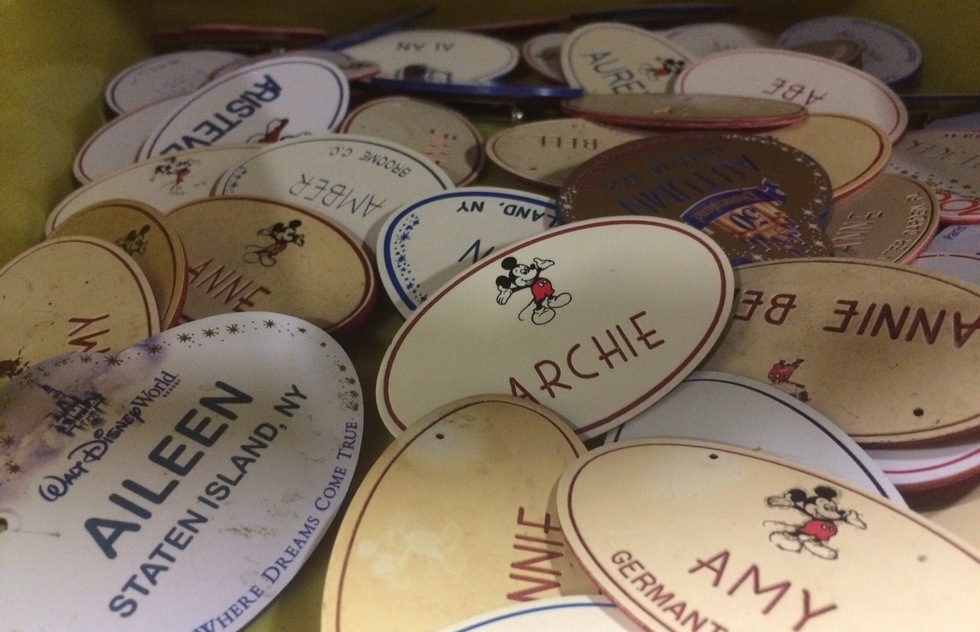 Jason Cochran
Theme Park Connection
When the theme parks close down rides or shops, they often liquidate their assets at shops like these, where anyone off the street can buy stuff like obsolete uniforms, retired Disney resort dinnerware, outdated theme park maps, and piles of name tags (pictured)—all for cheap. You'll even find some movie props and the occasional big-ticket item like a whole ride vehicle. Address: 2160 Premier Row 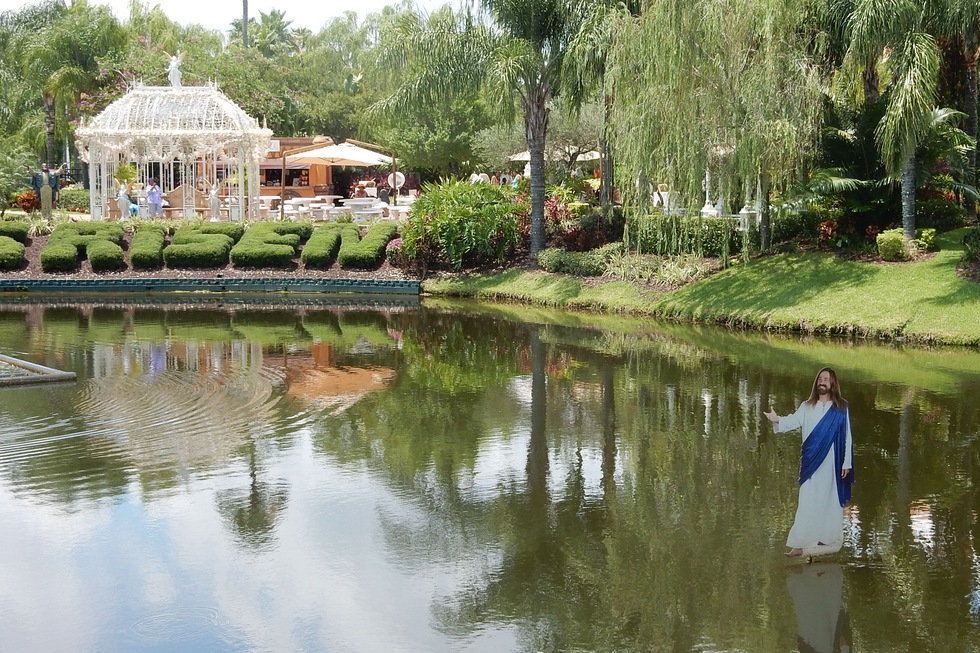 Jason Cochran
Holy Land Experience
A rare theme park with tax-exempt status, what Holy Land Experience lacks in rides (there are none) it makes up for in antique Bibles, models of Old Jerusalem, and re-enactments of Biblical events like the Last Supper and the Crucifixion—the presentation of which, in the Holy Land Experience, includes an honest-to-goodness boxing match with the Devil. HLE tends to mostly attract the devout, although looky-loos have been known to attend. This is the central pond, which is permanently furnished with a cutout of an actor playing Jesus walking upon it. 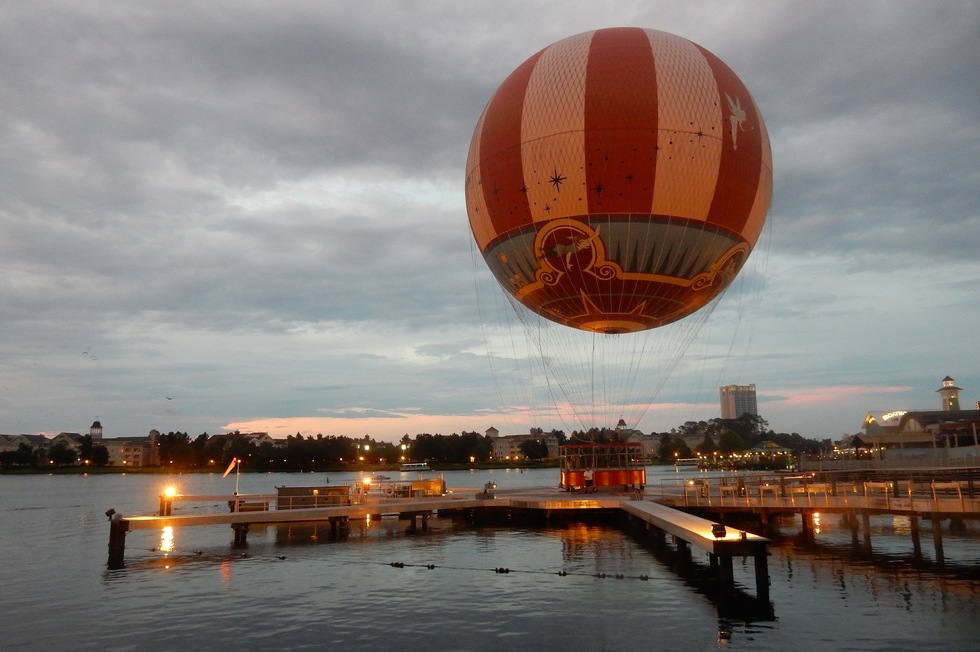 Jason Cochran
Characters in Flight
Disney Springs is a shopping-and-dining district that lies outside the theme parks and doesn't require admission. But it does have a ride: The Characters in Flight balloon, which in good weather (and with breezes under 22mph) ascends 400 feet for a panorama of the Walt Disney World and Lake Buena Vista areas. You ride on a steel-enclosed catwalk and the balloon is guided by a cable, so this won't end like The Wizard of Oz. 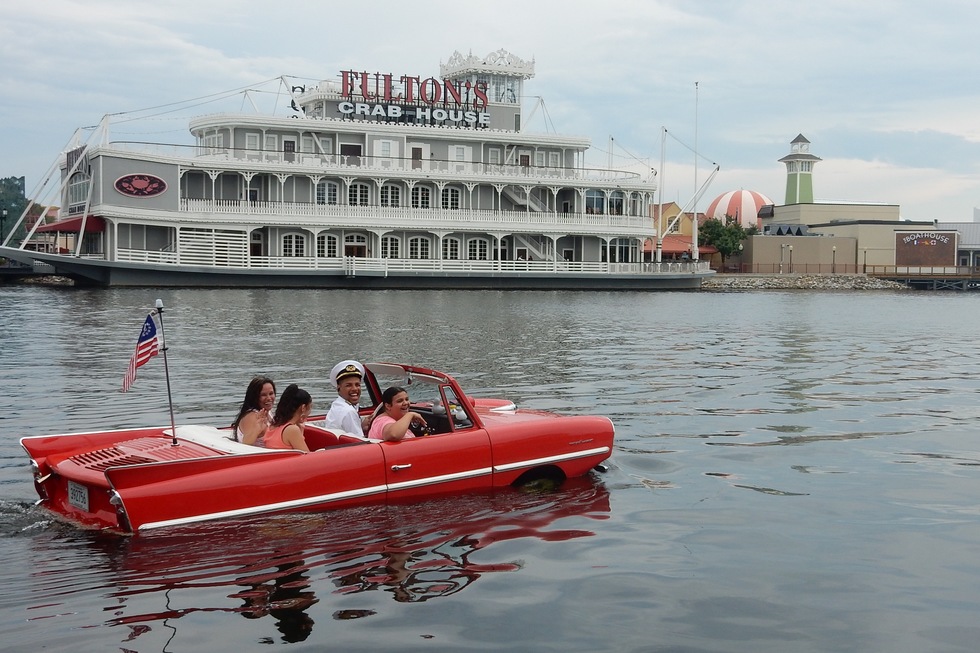 Jason Cochran
Amphicar
The Amphicar is an amphibious automobile that was actually in production in the early 1960s, and The Boathouse at Disney Springs has acquired a fleet of them. You can rent one (with a pilot) for your amusement. You start on land, ride down a ramp into the always-smooth Village Lake, and make a display of yourself for jealous onlookers for 20 ridiculous minutes. 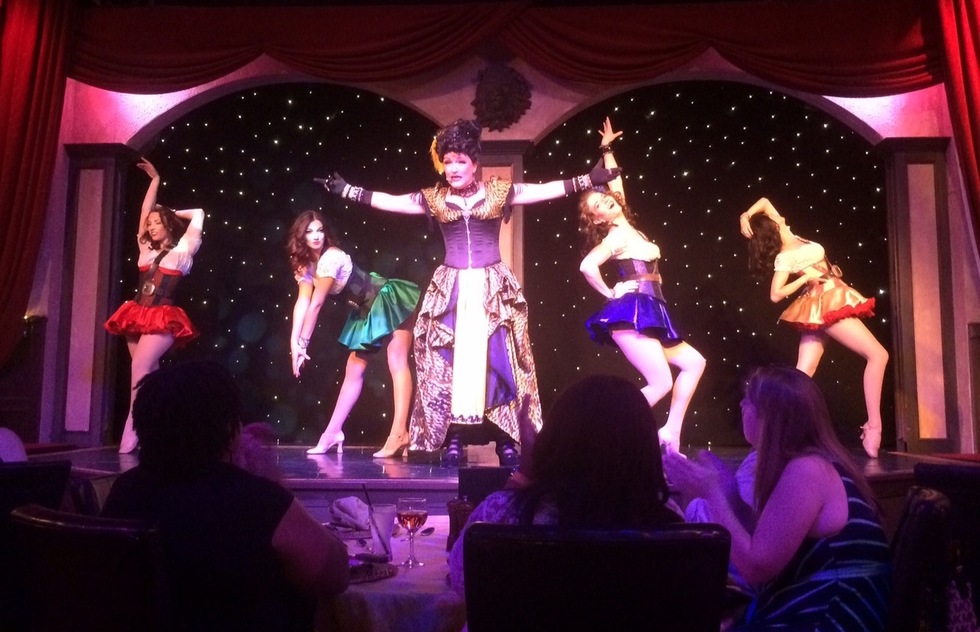 Jason Cochran
Treasure Tavern
One of the great unsung Orlando traditions is "dinnertainment"—a raucous stage show you see in a special theatre while you eat dinner. One of the newest, and most adult-themed, is the silly Treasure Tavern, which is like a cross between The Benny Hill Show and Cabaret. Expect a few circus acts, some music with mildly ribald lyrics, a little dancing, and a lot of alcohol, which helps the first three go down better. 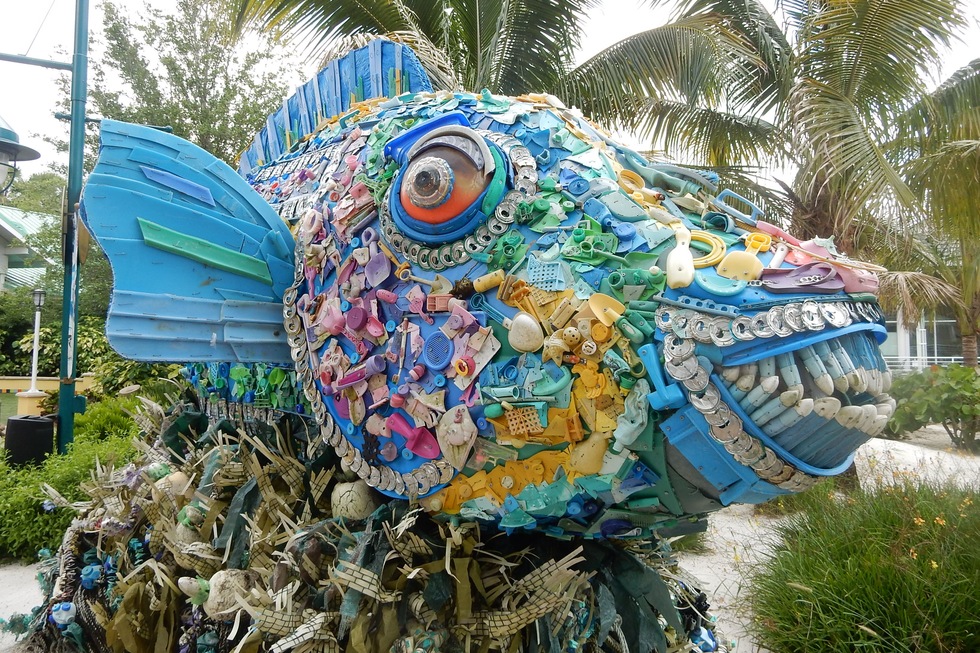 Jason Cochran
What to Do in Orlando
Is that all? Not even close. There's more—like this huge sculpture made entirely out of plastic trash that was fished out of the oceans by the group WashedAshore.org, found at SeaWorld.

For the full list of all the fascinating stuff most people miss, grab a copy of Frommer's' award-winning guide to Orlando—one of the only guidebooks on the market that devotes full attention to both the Disney/Universal theme parks and the other things that make Orlando one of the most popular places in the world to visit.
Family & Kids
Theme Park
Vacations