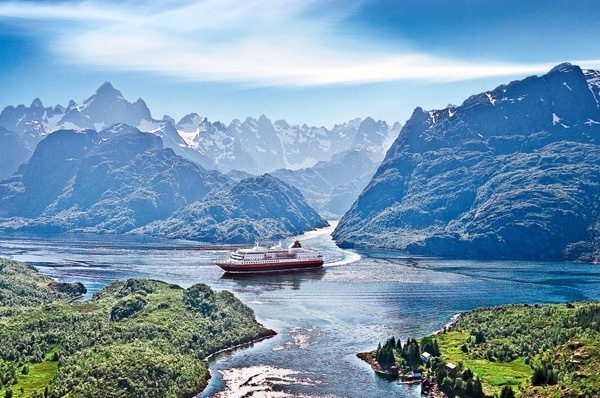 By Melissa Klurman
Forget everything you know about cruise ships. Hurtigruten, which sails the Norwegian coast, is nothing like them.

Its name translates to "Fast Route" because the line was created in the 19th century to ferry passengers, mail, and cargo along 1,500 miles of the craggy Norwegian coast that was otherwise too difficult to reach by rail or road. Today, Hurtigruten, once marketed as Norwegian Coastal Voyages, is still partly a ferry, carrying people, cars, and provisions—but cleverly, its fleet of 11 ships in Norway double as tourist cruises complete with staterooms, seafood buffets, and a full staff. Norwegians may hop on for a port or two, but overseas visitors usually book a 6-day one-way journey up the picture-perfect shoreline from Bergen to Kirkenes, or a 12-day trip up and back. Unlike cruise ships that cram in thousands, Hurtigruten’s fleet comprises mid-size vessels that hold an average of 500 guests, and only two of its ships even has a pool.

Curious about Hurtigruten's scenic journey? Here's what you can expect when you travel the "fast route" up the coast of Norway: 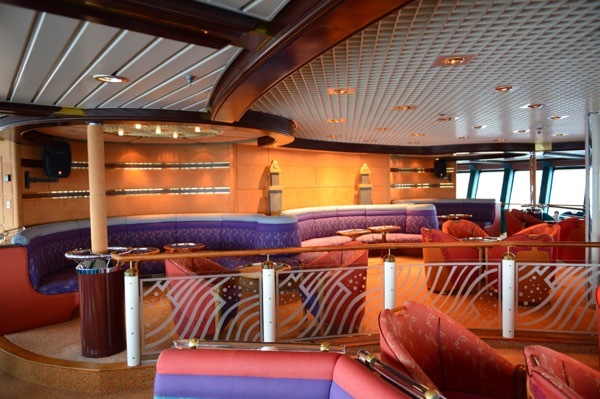 Melissa Klurman
Hurtigruten Bar Lounge
The bar is where you'll find low-key, nightly entertainment ranging from traditional storytelling to live guitar or piano, led by the onboard expedition crew. The crew also conducts information sessions throughout the cruise on daily points of interest such as the wildlife on the Northern Cape, the Aurora Borealis, and the fjords. 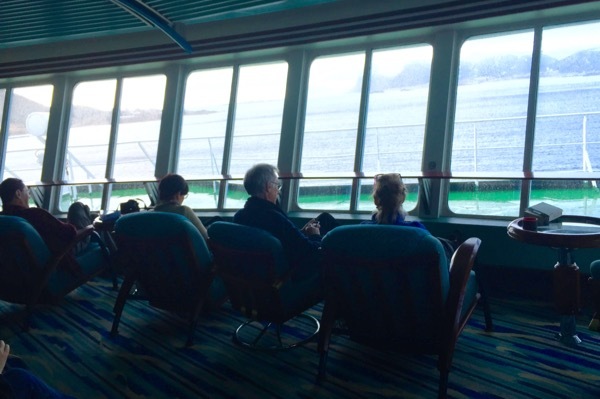 Melissa Klurman
Hurtigruten Panorama Lounge
The journey up the western Nordic coast has been called the world's most scenic, and soaking up the panoramas is the main form of entertainment aboard Hurtigruten. The best views are had in the aptly named Panorama Lounge. 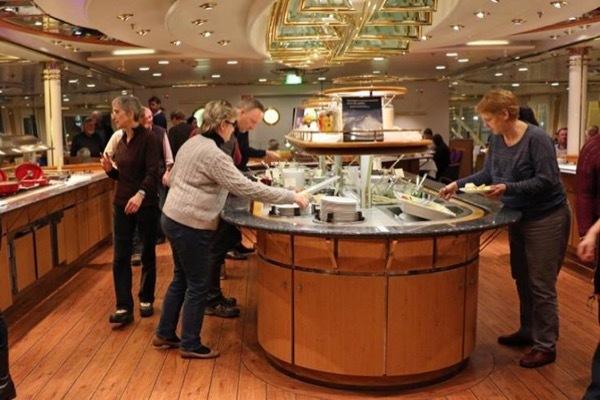 Kelly Kelly
Hurtigruten Dining Room
Three meals a day are served as part of a cruise package: a hearty Norwegian buffet breakfast, a seafood-laden buffet lunch, and a three-course dinner of regional specialties. Hurtigruten takes on fresh fish and produce four times during a 6-day cruise, and uses 80 percent local ingredients in what it calls Norwegian "Coastal Cuisine"—you'll eat Norse specialities such as fresh-caught Arctic char, wild salmon from Svolvan, halibut in Hasvik, and golden cloudberries. 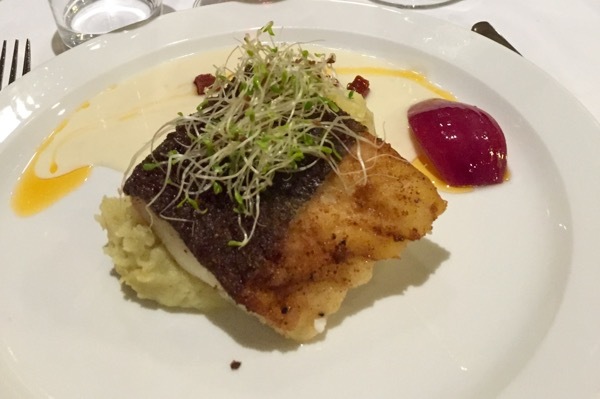 Melissa Klurman
Cod is King in Norway and on Hurtigruten
Cod is king in Norway—cod fishing is the top industry along its coast. Hurtigruten passengers spot massive A-frame drying racks in ports and fishing boats throughout their journey. Hurtigruten offers a traditional cod fishcake tasting on deck during an evening of star gazing. Here skrei (the highest quality fresh-caught cod) is given star treatment on one of the daily Coastal Cuisine dinner menus. 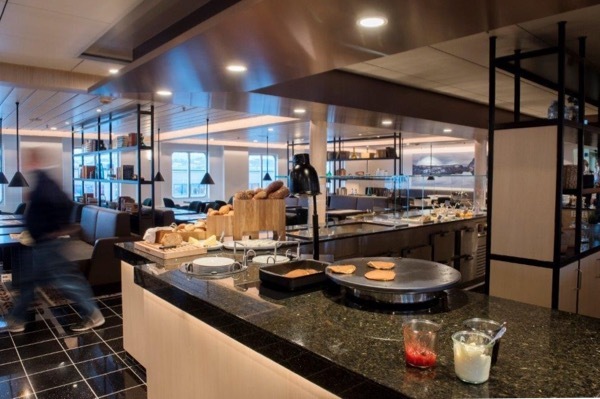 Hurtigruten
The New Cafe on Hurtigruten
The coffee shops are social hubs on the ships because ferry passengers spend time here as well as cruise passengers—they're a great place to meet Norwegian locals. They're also the only spot on the ship to get drinks and snacks (including hot sandwiches or addictive Norwegian waffles) between meals. 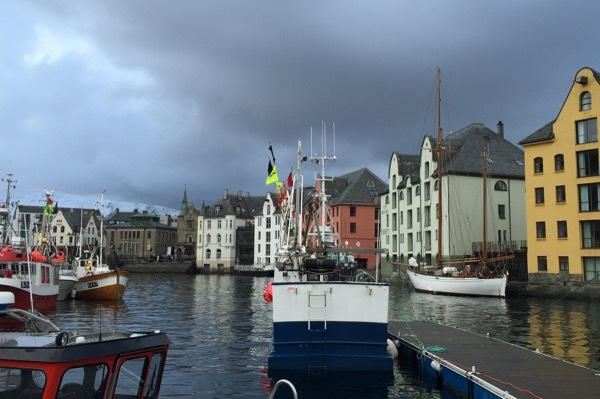 Melissa Klurman
Hurtigruten Scenic Port of Calls
The small ship size means it can visit ports other cruise lines couldn’t even consider, and since this is working ship that ferries passengers up the coast, ships stop seemingly everywhere there’s so much as a house. Many of the smaller stops (the ships stop 33 times on a one-way journey) won’t be announced, but if there’s something that catches your attention, you can run down the gangplank as soon as the ship docks. For quick stops (15 to 30 minutes), you have time to stroll around town or take photos from the dock. You can get off wherever you’d like, but remember that the ship waits for no one and sticks to a working ferry schedule.

Longer stops allow passengers to book excursions in scenic port towns such as Bergen, Ålesund, and Trondheim. Moving up the coast across the Arctic Cirlce, the expeditions become the stuff to dine out on for a lifetime: snowmobiling in Lapland, glacier hiking in Bodø, dog sledding in Tromsø, and king crab fishing in Kirkenes. 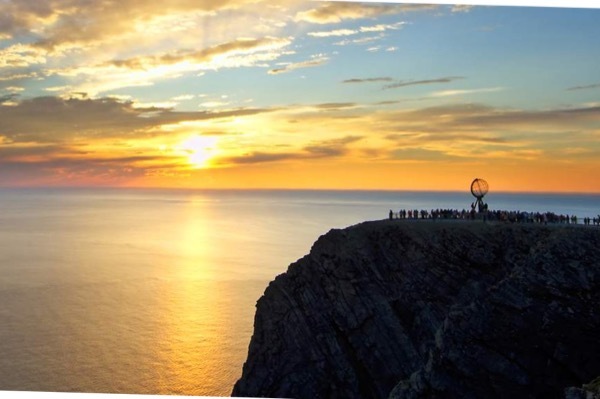 Hurtigruten
Hurtigruten Excursion to the North Cape
Another port of call highlight is a stop at Honningsvåg, the gateway to the North Cape, the northernmost point on the European continent and a rugged cliff that plunges down into the Arctic Ocean. Its iconic globe statue makes for the ultimate photo op. In winter, you'll see endless snow, in the summer the midnight sun, and all year, a landscape of treeless plains, picturesque fishing villages, and the odd reindeer. Honningsvåg is pretty much everything you'd hope to see on a Norwegian journey on one remote stop. 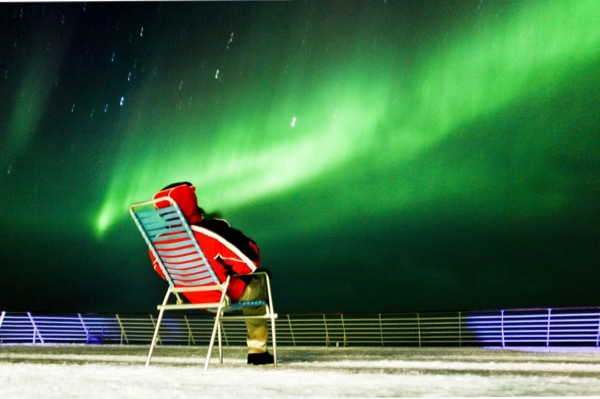 Hurtigruten
Northern Lights Fill the Sky on Hurtigruten
One of the most popular reasons for cruisers to sail with Hurtigruten in the winter is for a chance to spot the Northern Lights.  Chances are good you'll see them after the ship passes over the Arctic Circle and into the clear, pollution-free skies of northern Norway. Hurtigruten is so confident that guests will experience the glowing natural phenomenon that if you take a full 12-day voyage during the winter and don't see them, it will let you cruise again for free. 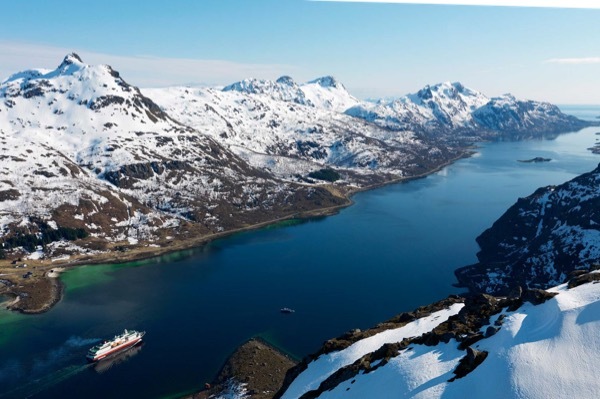 Hurtigruten
Squeezing up to Trollfjorden on Hurtigruten
Norway's coast is often associated with soaring fjords, and Hurtigruten brings passengers within easy picture-taking range of at least 100 of the most impressive sights. One of the most popular photo ops is Trollfjorden at the straight of Raftsundet, where the ships comes within 100 yards of the rocky walls. (Trolls are reputed to live in this area—a fact the ships celebrate with special "trollkner" cocktails.) 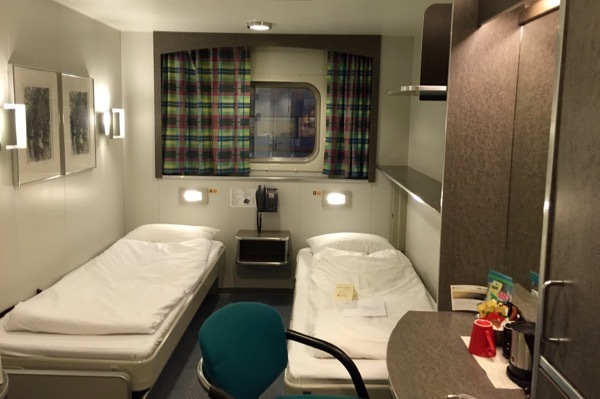 Melissa Klurman
Arctic Superior Stateroom on Hurtigruten
Staterooms are more like European hotel rooms, not luxury suites. Most contain two single beds, one of which flips into a couch, plus a desk, a chair, and an armchair. Bathrooms have showers with good water pressure, heated floors, and a single-pump dispenser with soap used for washing everything from hands to hair (if you're picky, bring your own moisturizer, shampoo, and conditioner). There’s a kettle with tea and coffee makings and a hard-wired phone that picks up the intercom so you can be alerted to Northern Lights sightings—but no TVs or in-room Wi-Fi, so be sure to download entertainment options on your personal devices before you board. 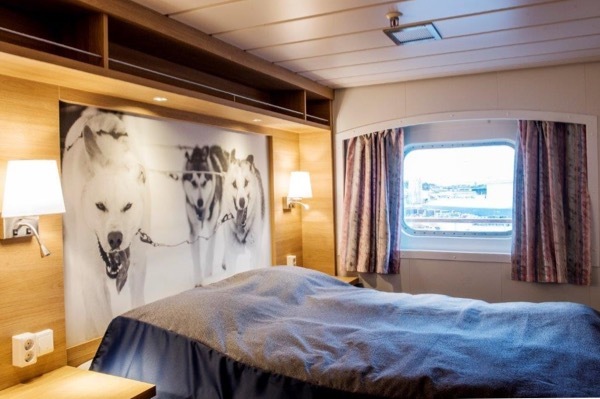 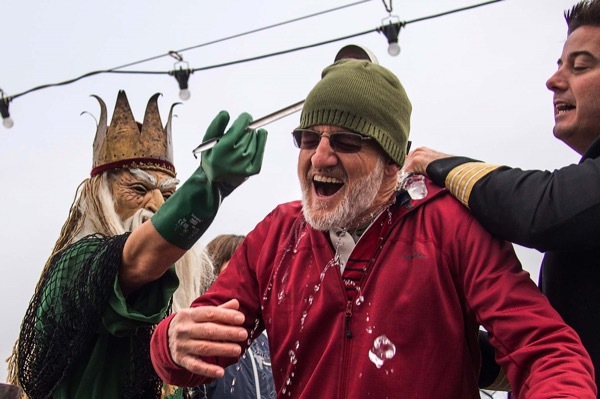 Hurtigruten
An Arctic Baptism At Sea
One more thing on Hurtigruten that's unlike anything you'll find on other cruise ships: an Arctic baptism. It's an exciting moment when the ship crosses the latitude marker at 66 degrees, 34 minutes north. Hurtigruten celebrates the occasion up on deck with both the captain and "the Norse god Norge" on hand to drop freezing ladles of Arctic water down the backs of guests. Sure, you can skip it, but why miss out on a prime Facebook photo moment? You also get a shot of Norway's much-loved aquavit Linie (which is sailed around the world before it's served), and a true Norwegian story to tell your friends.
Cruise
Honeymoons