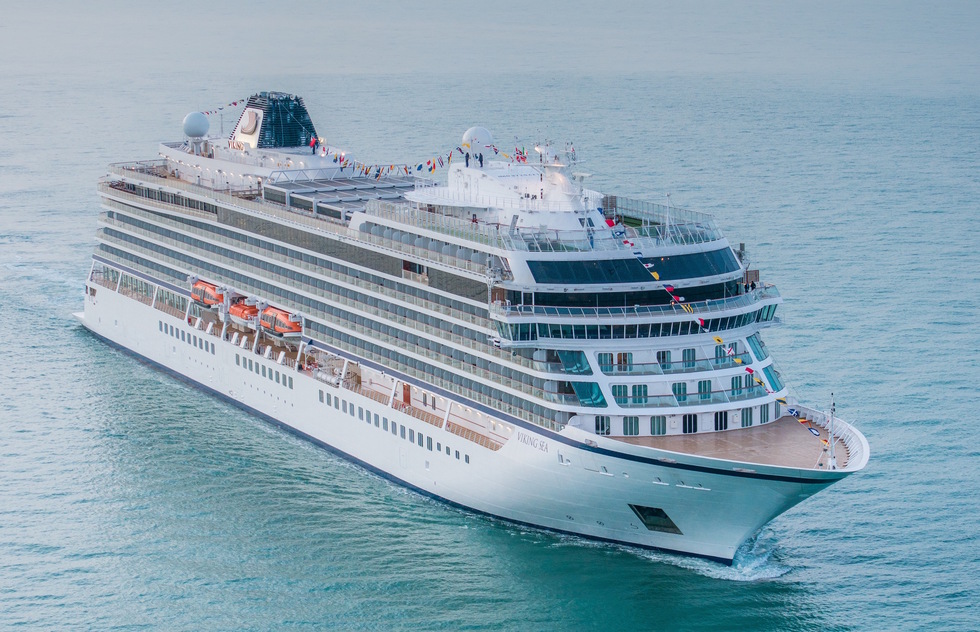 The Viking Sea: A Photo Tour

By Jason Cochran
Viking Cruises is advertising like crazy on TV, but what do you know about it? It used to be known as a longboat river cruiser but it's expanding aggressively into cruise ships for the seas as well—and its Viking Sea, launched in 2016, is the second of six ships the company plans to christen through 2020. Now that it's sailing, the company's game plan for an identical seagoing product becomes clear: The Sea is materially nearly identical to the Viking Star, released in 2015, so if you're familiar with the Star (here's our slideshow feature on that vessel), then you're familiar with the Sea—and with the forthcoming Viking Sun, Viking Sky, Viking Spirit, and Viking Song.

But there are some features typical of mainstream cruise ships that the Viking Ocean ships intentionally lack—not that the omissions are a bad thing. Here's what we mean. 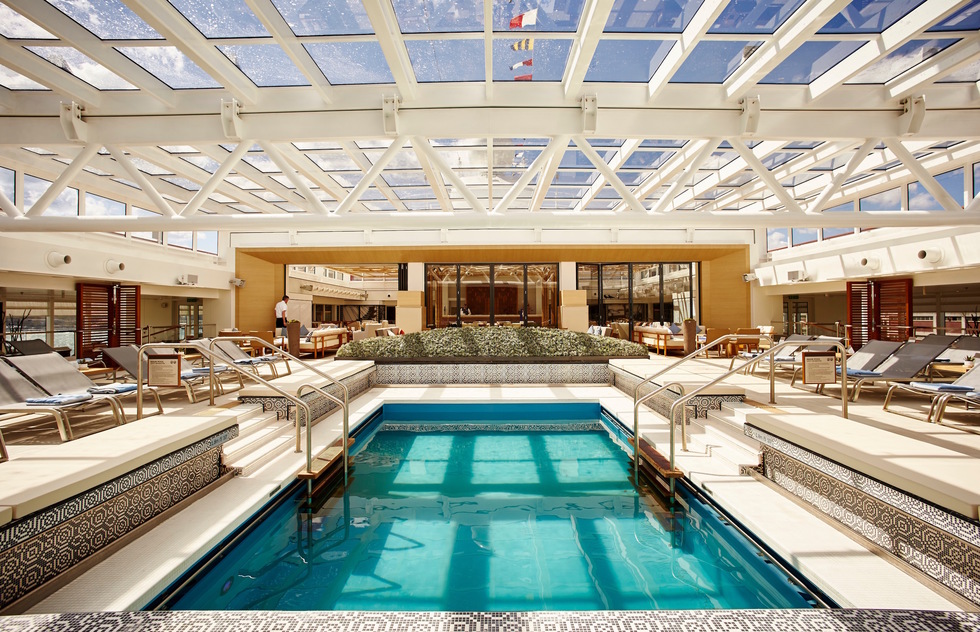 Viking Cruises
No noisy pool contests
Every now and then, there's a short classical or jazz performance, but no one will get in your face to demand you do the limbo for a cheering crowd. Even when they show movies under the stars here—that roof retracts—passengers listen to them on headsets. 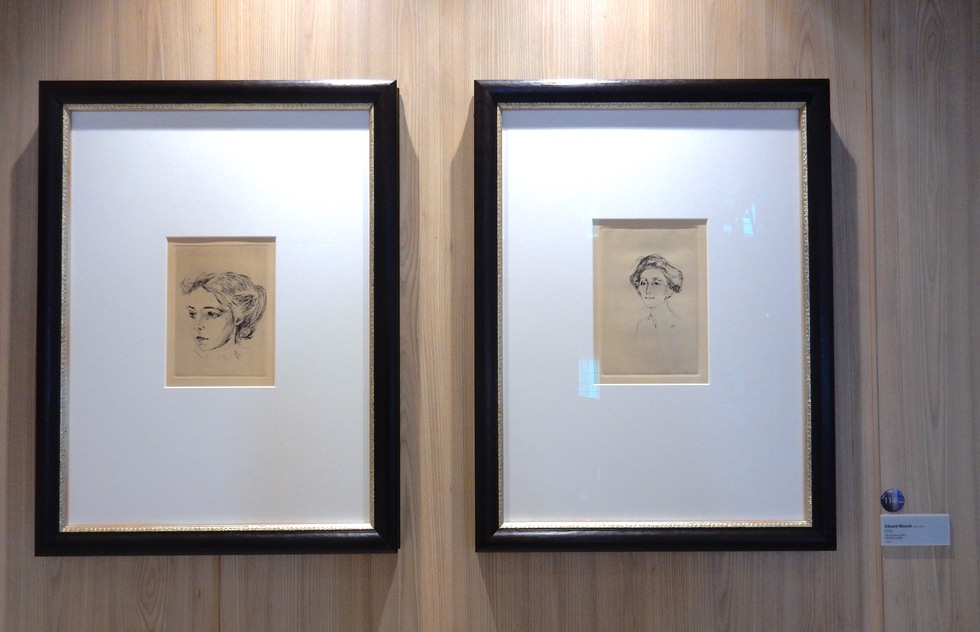 Jason Cochran
No art "auctions"
There is no art gallery filled with schlocky paintings of dancing olives or girls on motorcycles. There is art, of course, but it's well-selected, not for sale, and often quite valuable—these pieces in the main Atirum of the Viking Sea are by none other than famed Norwegian painter Edvard Munch, who has multiple works on board. 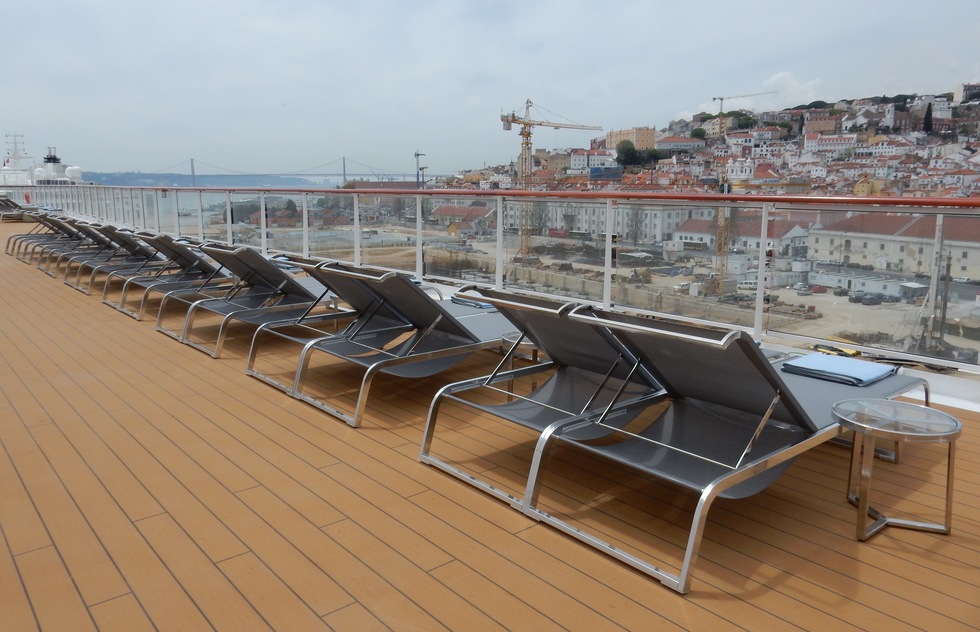 Jason Cochran
No fighting for lounge chairs
The decks on the mainstream lines' gargantuan ships are a free-for-all where you have to get up early for a seat and never let it out of your sight. But on the Sea, the top decks are lined with plenty of loungers (some in shade, which is nice), and the clientele that chooses Viking tends to be in their early retirement years—they're hardly bronzed pool bunnies who slather on tanning oil and lay around until brown. 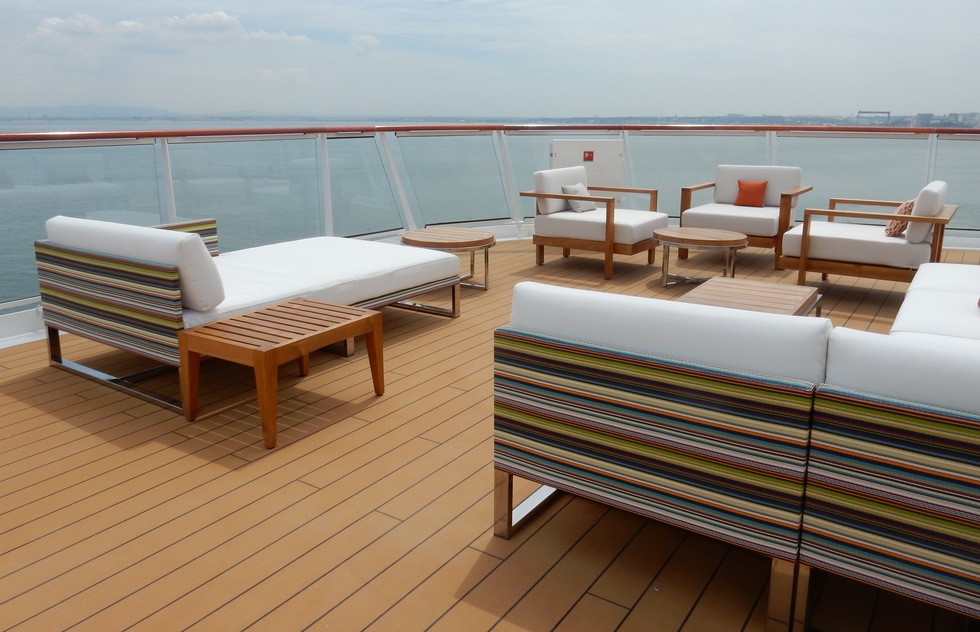 Jason Cochran
No piped-in music
It's almost like they want you to enjoy the sounds of the sea. Other lines don't give you a moment's peace until you retreat to the safety of your stateroom. 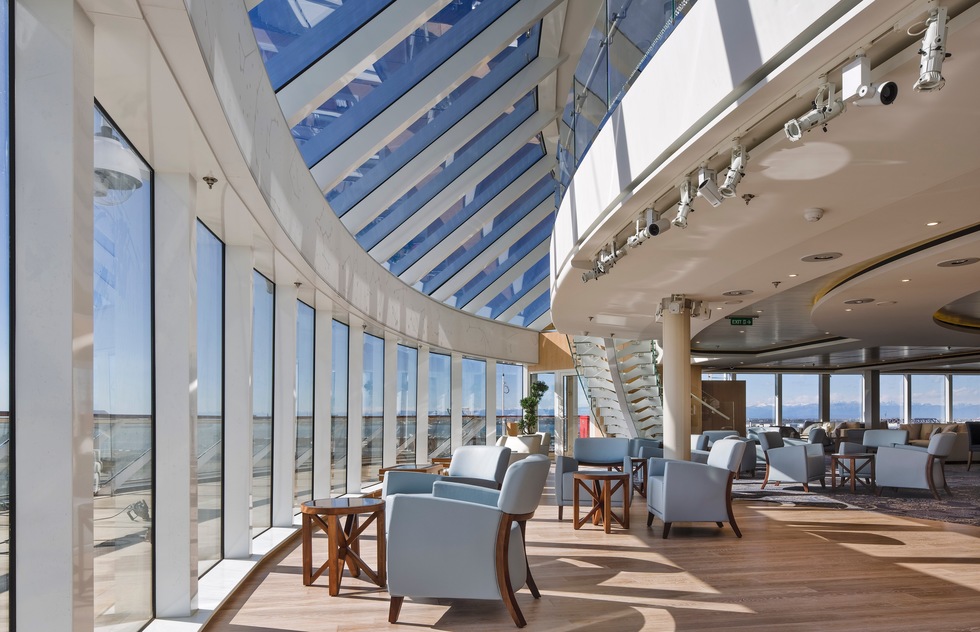 Viking Cruises
No casino
Instead, passengers tend to gather for wine or cocktails. This is the Explorers Lounge, high at the front of the ship, and it's a popular spot in the evening. 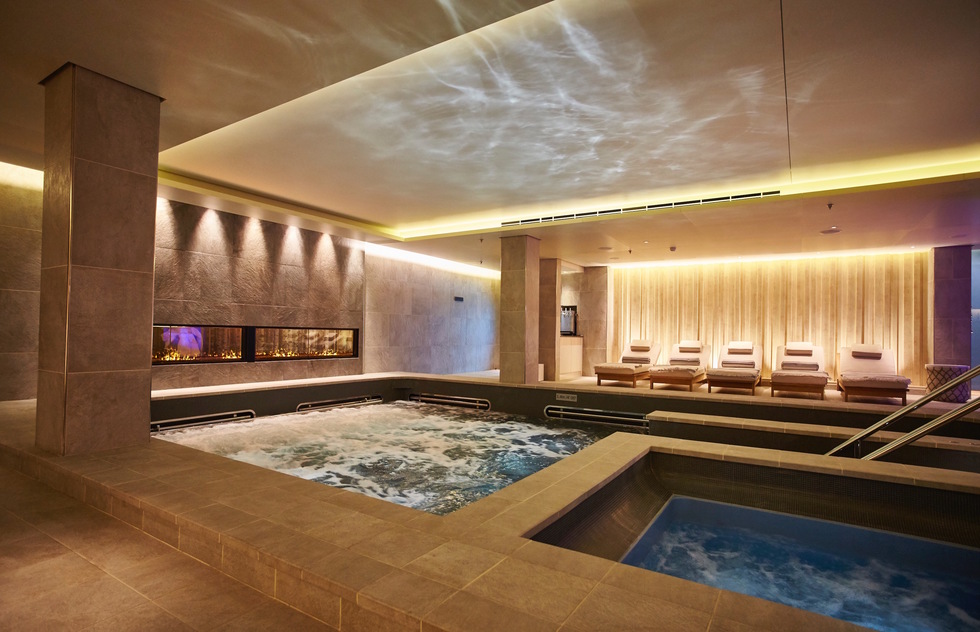 Viking Cruises
No corporate spa
Viking runs its own spa, rather than licensing that area to companies like Steiner and Canyon Ranch (you'll find these two on most of the mass volume cruise lines). This enables Viking to give treatments a Scandinavian spin befitting the line's Nordic origins. Like the Star, the Sea has a frozen "snow room" that should be used in alternation with the sauna for an invigorating Norwegian-style session. Or you can just hang out by the private indoor thermal pool, pictured. Viking hasn't conquered the age-old problem of overbooked treatments, though, so if you want a massage or other type of session, book early. 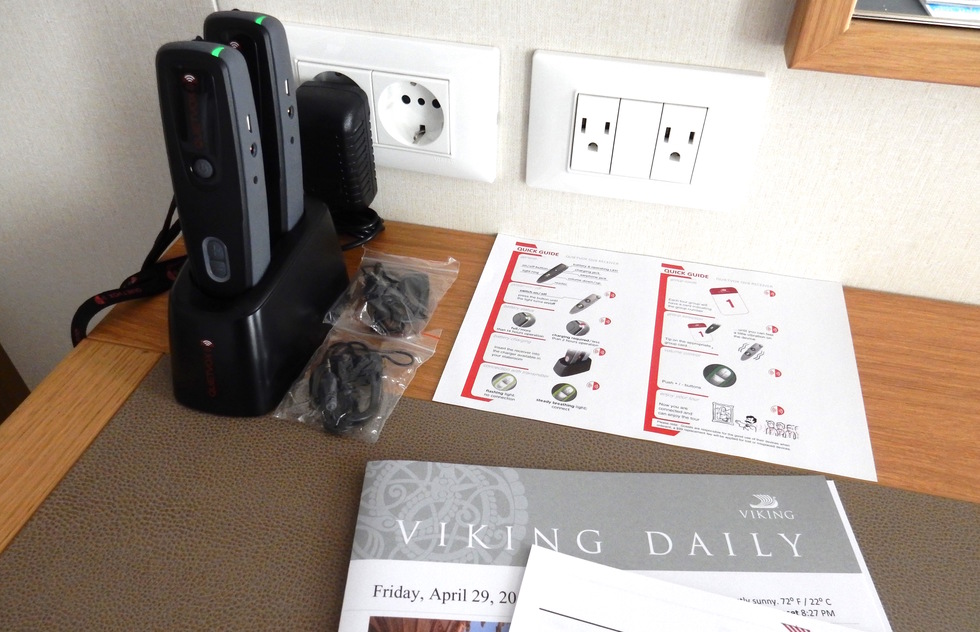 Jason Cochran
No shore excursion pressure
You don't have to pay for excursions if you don't want to—you'll still be able to learn about each place you go because there's always at least one free tour. Usually it's a multi-hour orientation that includes free time for shopping.  Each stateroom comes with a wireless headset system that allows you to hear tour guides without them having to shout. You take it with you whenever you go on a shore excursion and recharge it by night. (Incidentally, you can also see that cabins have both European and American power outlets—and there are also USB charging ports by your nightstand.) 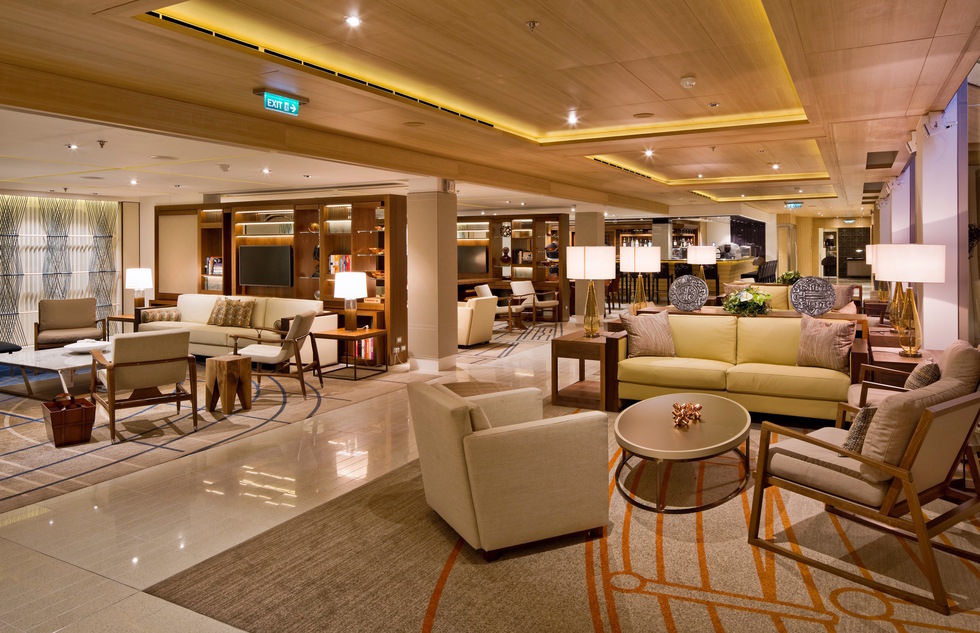 Viking Cruises
No kids' club
You'd have to be crazy to take a kid on a Viking Ocean cruise—there's nothing kid-oriented for an average child to do. Adults, though, will find themselves entertained. For example, there books everywhere—no need to sign them out, just take anything that interests you off the shelf (such as in the "Living Room," essentially the lobby of the ship) and start reading on the nearest sofa. And there are plenty of places to sit, too, found all over the ship. 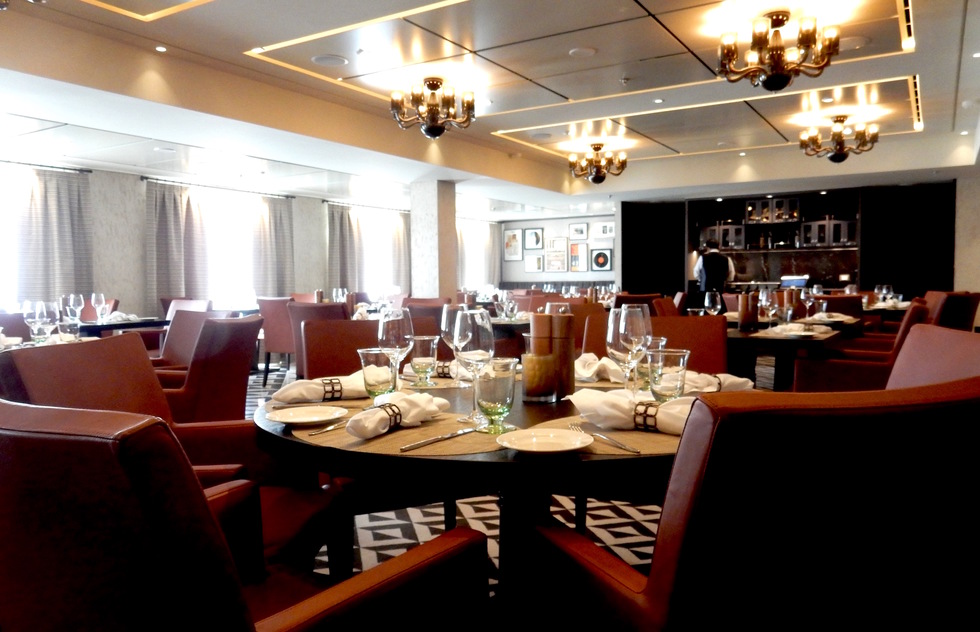 Jason Cochran
No up-charged food
This is Manfredi's, the Italian restaurant that's also on the Star. Even though the food here is far above par for a ship (osso buco, rich pastas and meats, hunks of artisinal cheese), it doesn't cost more to eat here. You get a few free reservations at each of the two specialty restaurants, which are this one and The Chef's Table, which cycles through specialty gourmet menus. 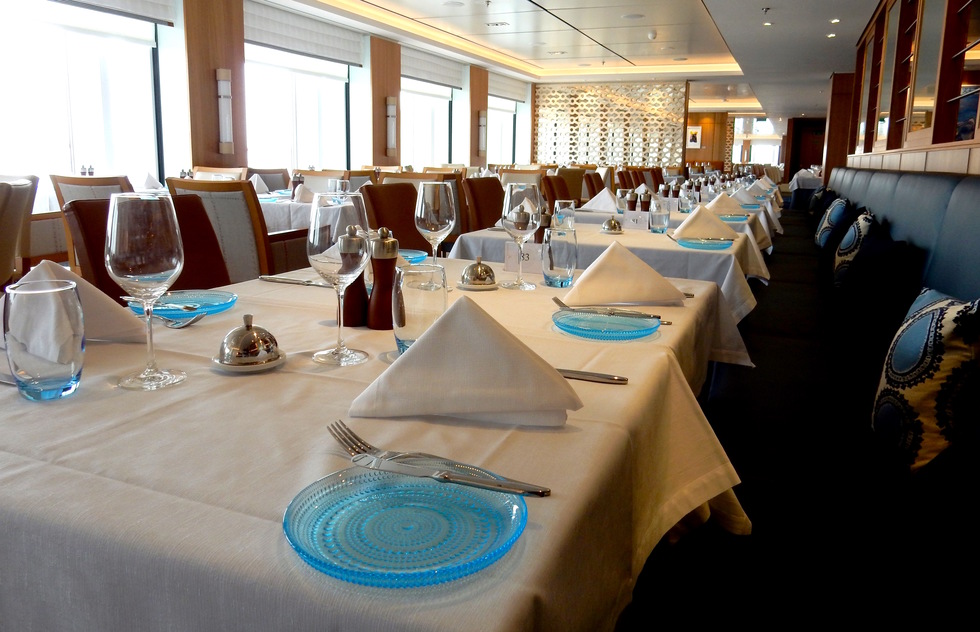 Jason Cochran
No up-charged food
This is the standard table-service choice, The Restaurant. It's long and narrow, so it's easy for everyone to see the ocean. There's also a buffet-style option, World Café, located on Deck 7 and also facing the water on both sides. And there's room service, which is free. 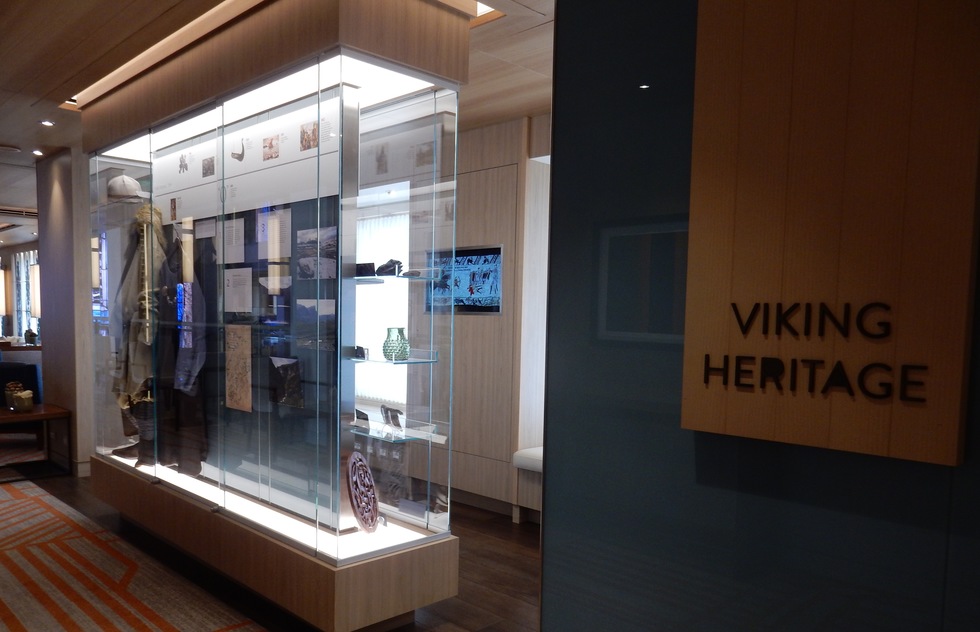 Jason Cochran
No major theatrical productions
There are a few occasional revue-style shows, but they're light on sets and costumes and not the best part, shall we say, of the entertainment options. What's better are the many brief pop-up classical and piano performances, plus licensed screenings from New York City's Metropolitan Opera. There are, however, near-daily lectures on current events or esoteric topics and a mini-museum about Viking culture—the people, not the company—plus another on polar explorers. 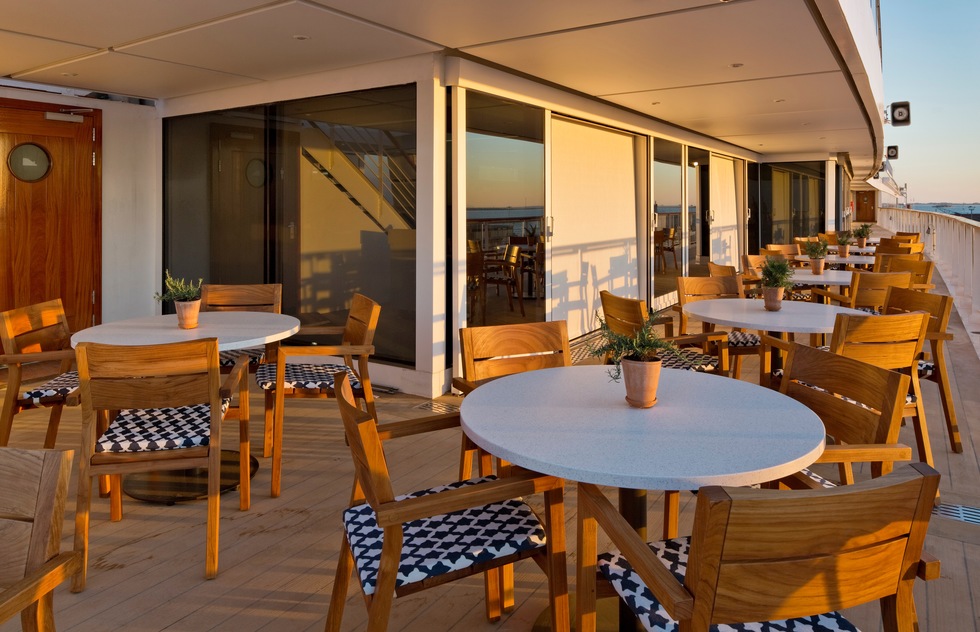 Viking Cruises
No photo sessions
No one will attempt to take your photograph and sell it back to you—there's no such thing on this ship. They may, however, try to serve you wine as you watch the sunset here on the Aquavit Terrace. 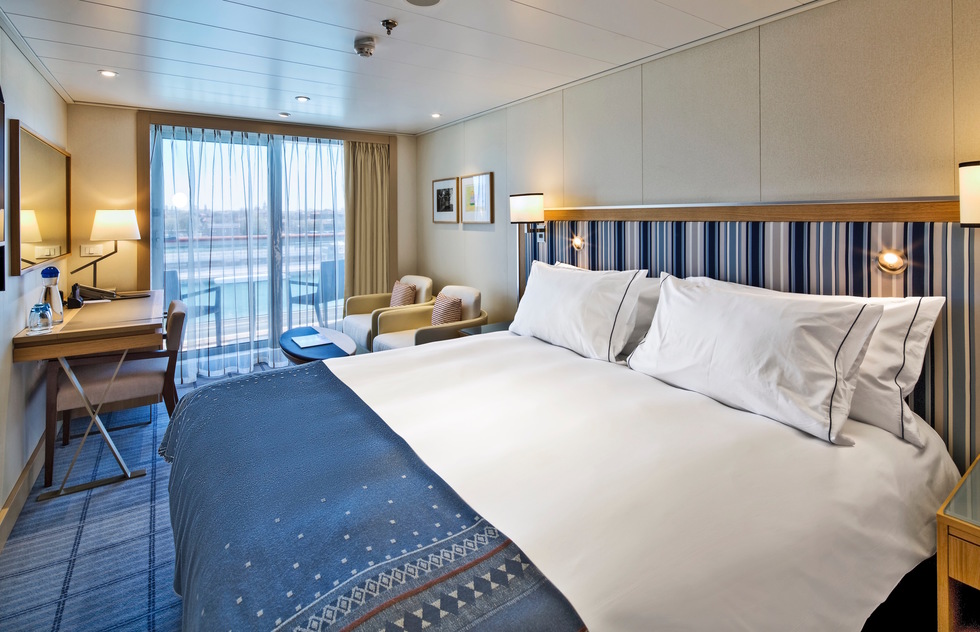 Viking Cruises
No nickel-and-diming
In your stateroom (this one is a Double Verandah, and it's fairly typical), the minibar is free, but whether that includes alcohol depends on your room type. There's also a selection of recent films and classics streaming for free on your TV—if you're a glutton for punishment, you can stay abreast of U.S. news with Fox News and MSNBC, both of which are regular channels. And W-Fi is free throughout the ship. Not fast, but free. 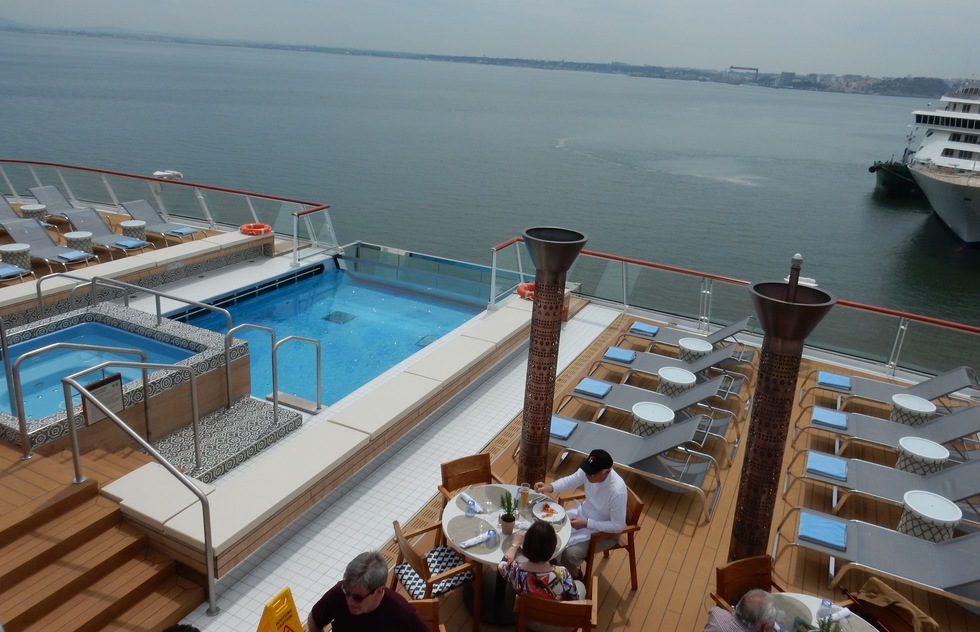 Jason Cochran
No endless days at sea
Viking's itinerary programmers say they want customers to explore the places they go, so they try to keep at-sea days to a minimum—a 10-day cruise might have only one. That contributes to the higher-than-average cost of a Viking Ocean cruise, since the ship must pay more port taxes and you'll be spending less money on board, but it also means you'll be seeing more. You may only have time to slip into the stern infinity pool on Deck 7 (here, docked in Lisbon) once or twice after a day of touring. 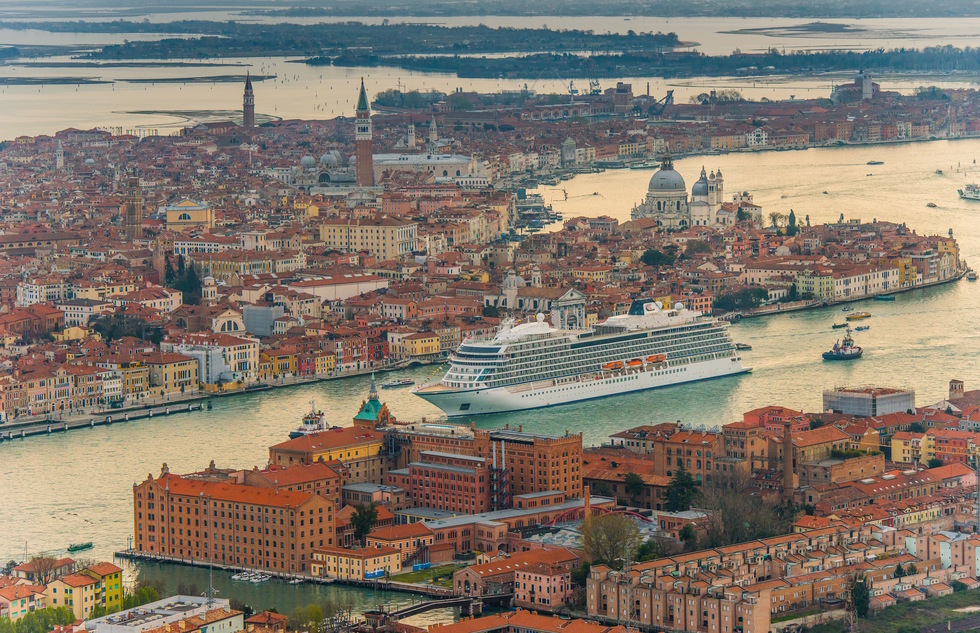 Viking Cruises
Few theme park ports
With just 9 decks and 930 passengers at its capacity, the Viking Sea can slip into ports that larger ships have to avoid. This one's Venice, Italy. Your itinerary is likely to have a few ports on it that you've never seen before if you've relied on mainstream ships until now.
Cruise
Photography
advertisement
advertisement