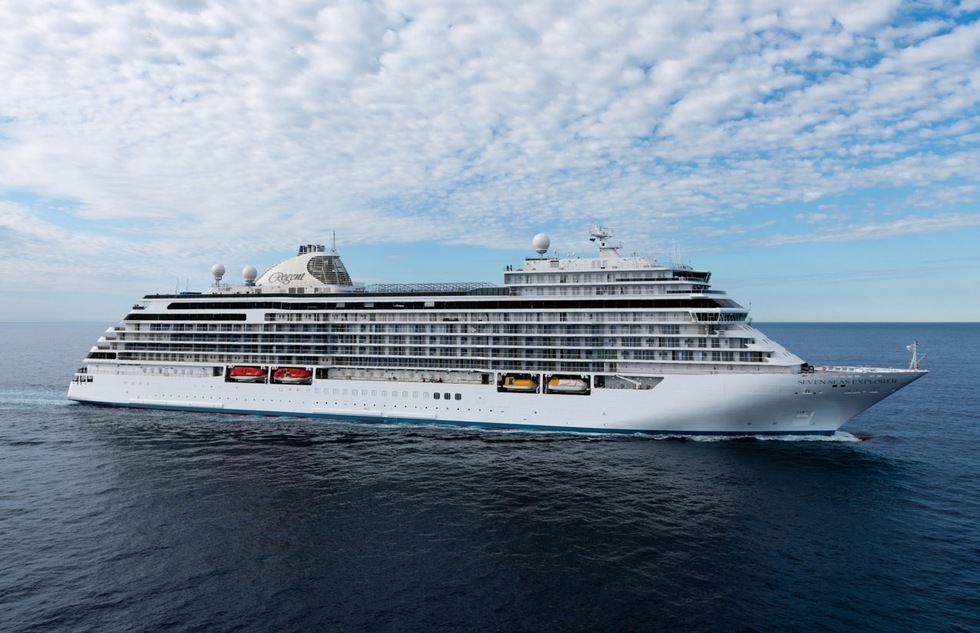 Regent Seven Seas Explorer: Is this 'The Most Luxurious Cruise Ship Ever Built'?

By Jason Cochran
Here she is: The $450 million Regent Seven Seas Explorer. The company that christened it in 2016 has boldly asserted that in doing so, it set "a new standard for inclusive luxury with a ship that is unquestionably the most luxurious ever built." In fact, the president of Norwegian, which owns the line, has crowed (somewhat controversially) that "this ship is a trophy to the one percenters." One could argue that a true one percenter could afford their own yacht, but his point was that it's unapologetically fancy. Yet ultimately, luxury is in the eye of the beholder. So behold—what do you think? Let's go inside. 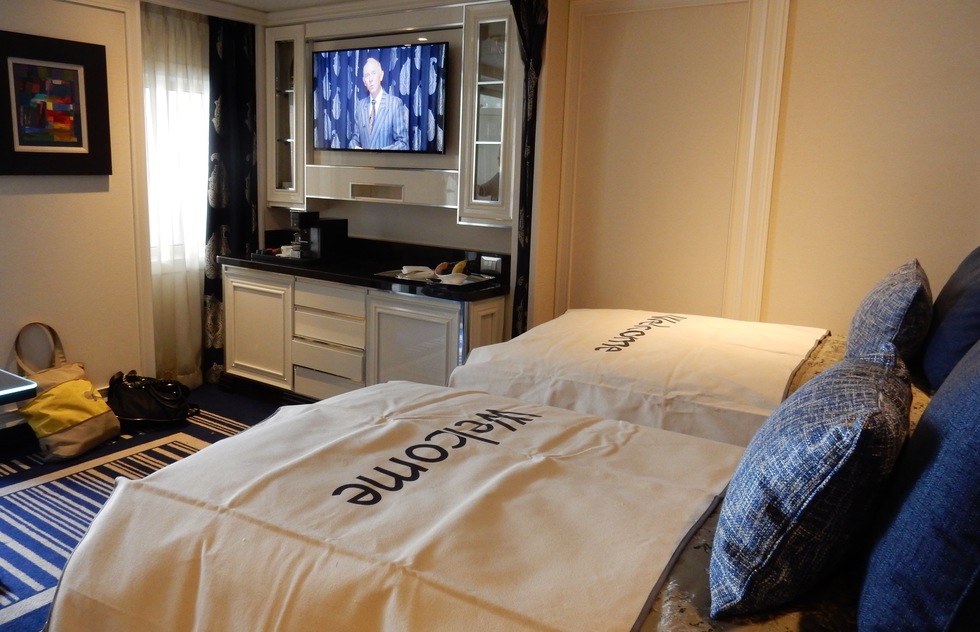 Jason Cochran
Superior Suite
This is what a regular stateroom looks like—they're all called "suites" on this ship, even if the majority technically has a layout similar to a hotel room. There are 375 in 10 categories. In this case, it's a Superior Suite, category F2. It's about 332 square feet (30.8 square meters). The fittings are indeed a few cuts above what most mass-market cruise ships have. There's molding on the walls, thick and richly colored curtains, and other details that make it feel more like an actual hotel room than a seagoing cabin. The bed is king-sized unless you request for it to be split into twins, as this one was. 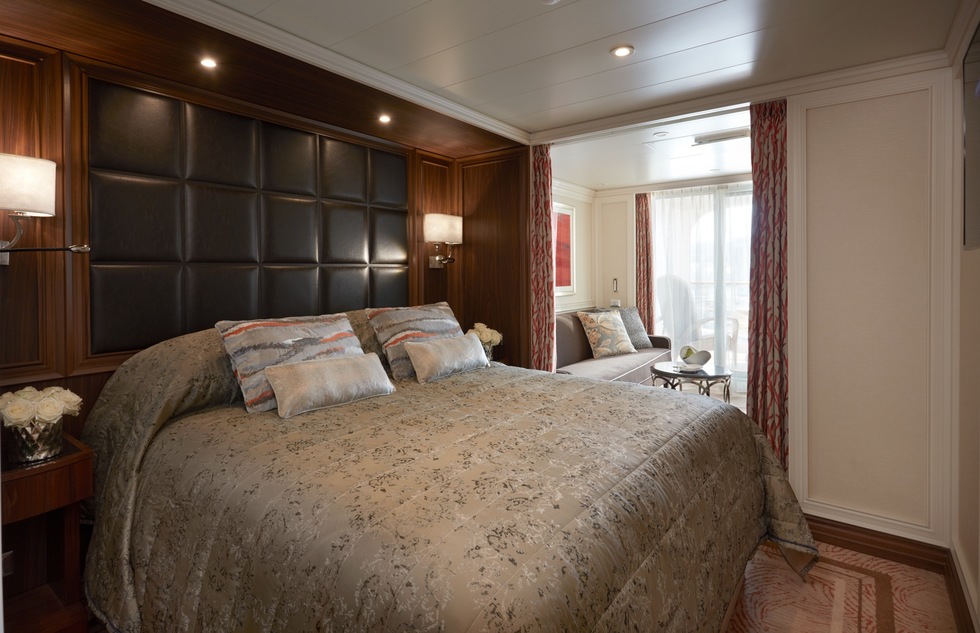 Regent Seven Seas
Veranda Suite
Here's a glamour shot taken by the company of one of its Veranda Suite rooms, the most "basic" cabin available. That's 219 square feet (20 square meters). As a baseline, all cabins come with a private balcony, daily fresh fruit, a welcome bottle of champagne (although you may have to hassle staff to keep it iced—they won't do it automatically), hair dryer, 24-hour room service, TVs that have a few news channels and free movies on demand, and—best of all—free WiFi, although it's as creeping slow as most ship Web access is these days. You won't be watching any streaming video on your devices, but it's fine for email. Even fully booked, there will only be 750 passengers using the bandwidth. 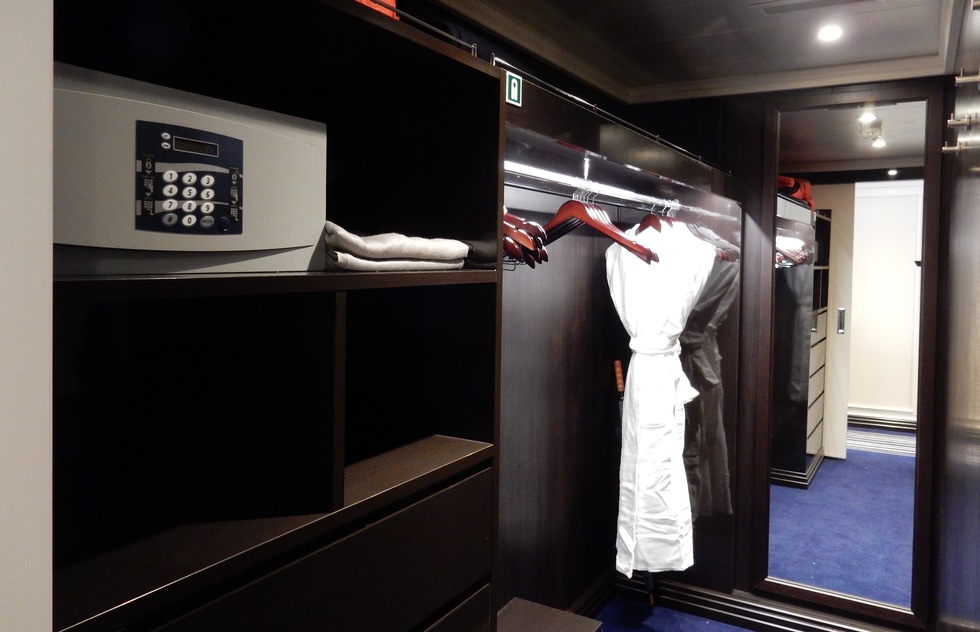 Jason Cochran
Walk-in closets
Remarkably, staterooms that are more expensive than the Veranda suite have honest-to-goodness walk-in closets (with a full-length mirror on the far wall) slotted between the sleeping area and the bathroom. This is highly unusual among cruise ships. It's also practical, since the upscale dress code requires passengers to have some elegant looks ready for dinner—no shorts and flip-flops at mealtimes on this line. 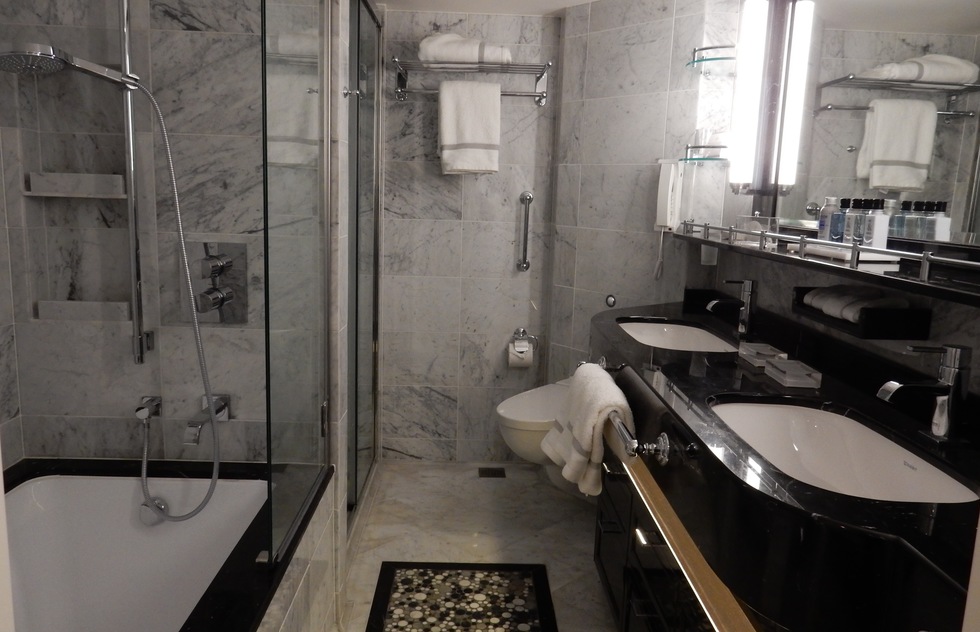 Jason Cochran
Full bathroom
Bathrooms, too, are hardly industry standard. Everything above a Veranda suite comes with not just a shower, which is common at sea, but also a bathtub, which isn't. The details are in marble (the ship contains an acre of it) and stone. If you've been on a cruise before, chances are your bathroom didn't look like this. 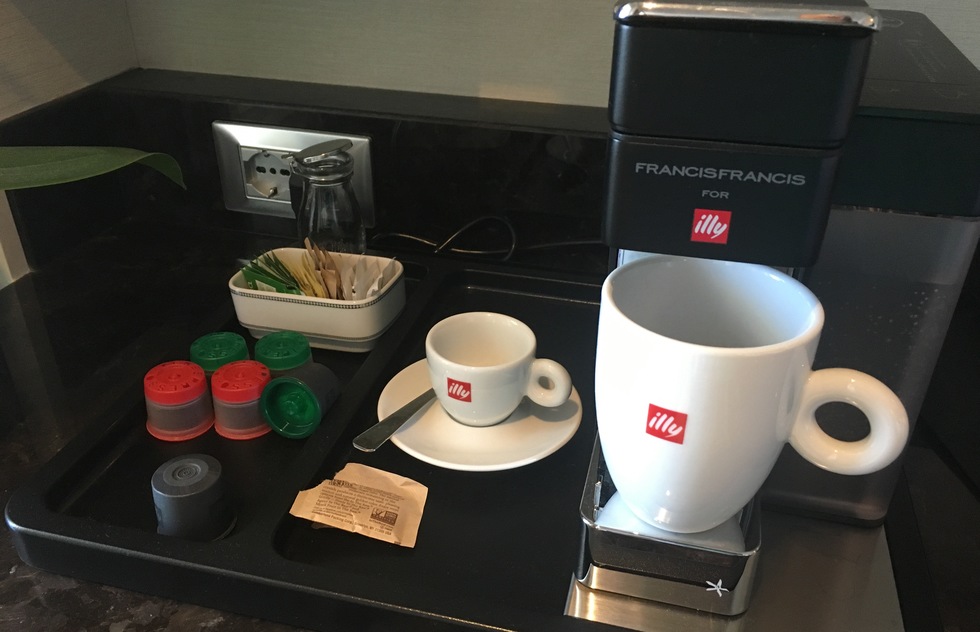 Jason Cochran
In-room coffee
Rooms have high-end in-room coffee/espresso makers. Like so many luxury hotels, they leave it up to you to figure out how it works and what the colored capsules mean, but at least it is replenished daily. So are soft drinks, bottles of water, and a few cans of standard beer, which are all included in your fare. (Milk, however, is ignored by your stewards—you have to pester room service to deliver that fresh, and there are some times of the day when you can't find any place on the ship to serve you a cappuccino. That would be par for the course on another cruise line, but true one-spercenters demand one-percenter service.) 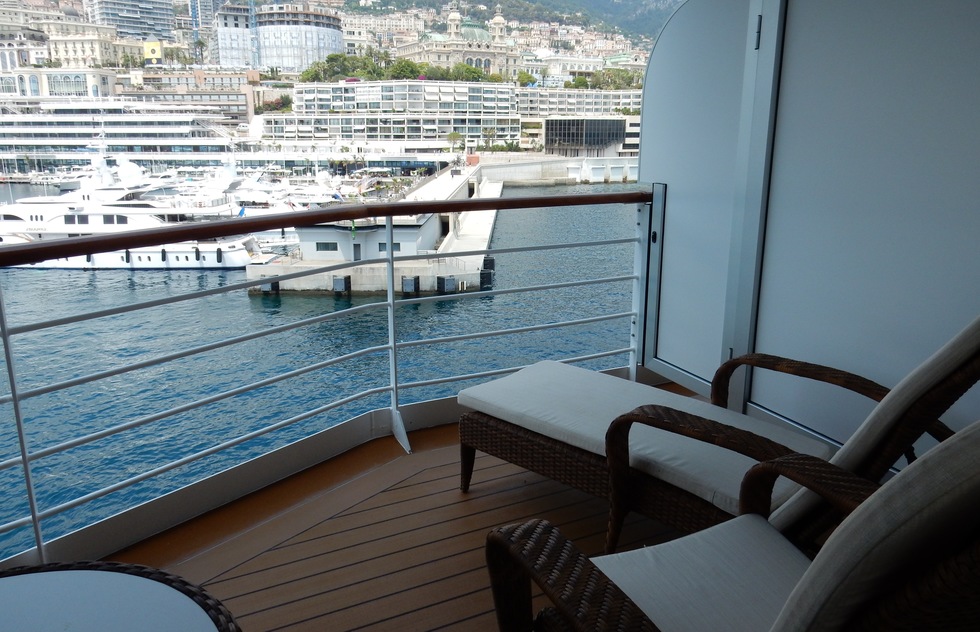 Jason Cochran
Balcony
Every room has a balcony—no gloomy inside cabins on this boat, unless you're on staff—and many of them are generous, with quality furniture. The average size of a balcony is 138 square feet (12.8 square meters), which is an industry high. This is in a Superior Suite (in port at Monte Carlo, Monaco). 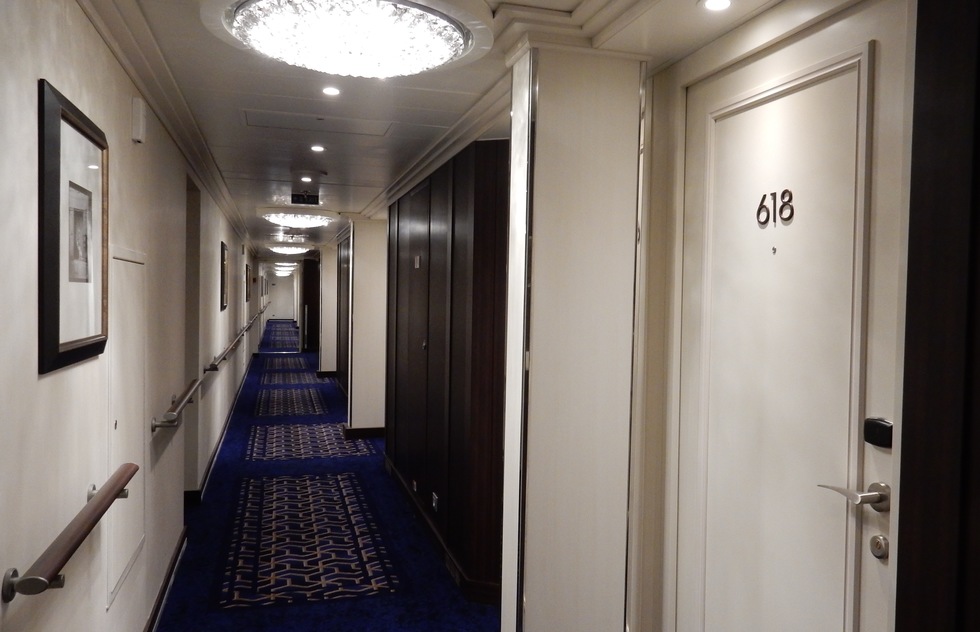 Jason Cochran
Corridor
Moving out of the cabins, the corridors have a more refined air than the usual. Regent Seven Seas attracts an older, wealthy clientele, and the chandeliers and original art in even the most humdrum of common spaces seem to convey that. 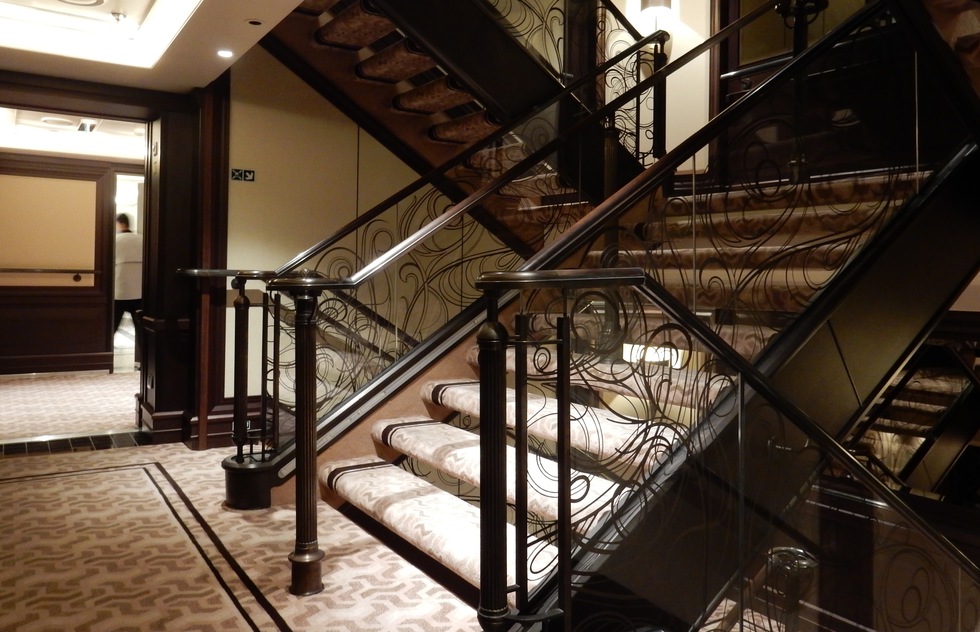 Jason Cochran
Stairwell
Likewise, the stairwells. Publicity photos don't often show these workaday areas of the ship, despite the fact that all passengers use them daily, and it's where some lines cut corners. But not so on this vessel. In the background is one of the uniformed crew members; there are 552 staffers serving 750 guests, which isn't a bad ratio. 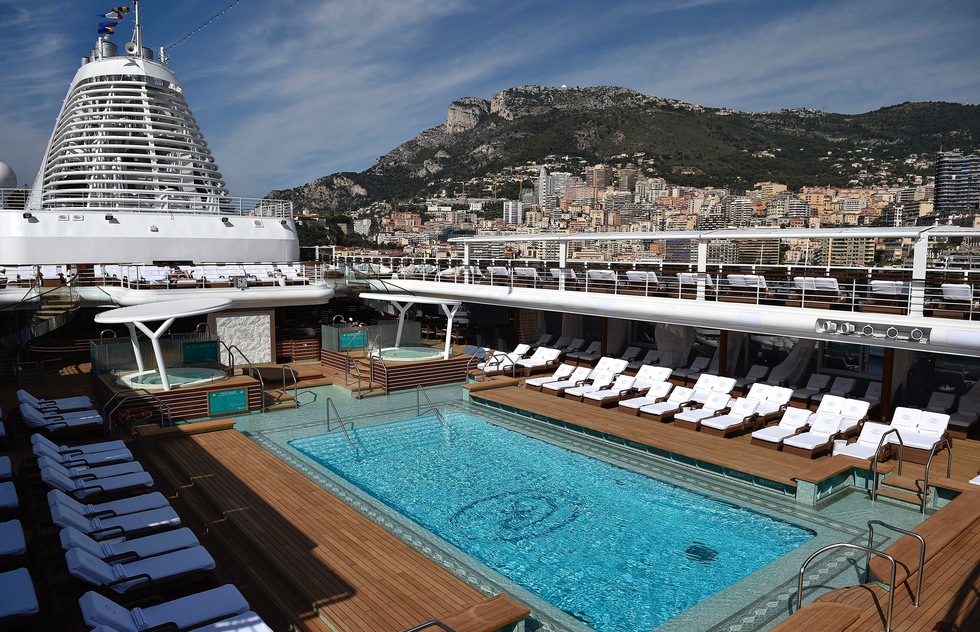 Regent Seven Seas
Pool
The pool area takes up two levels—plus two spa tubs, a bar, a grill with scoop ice cream—with substantial cushioned chaises, and there's never a person shouting into a microphone to force you to party. 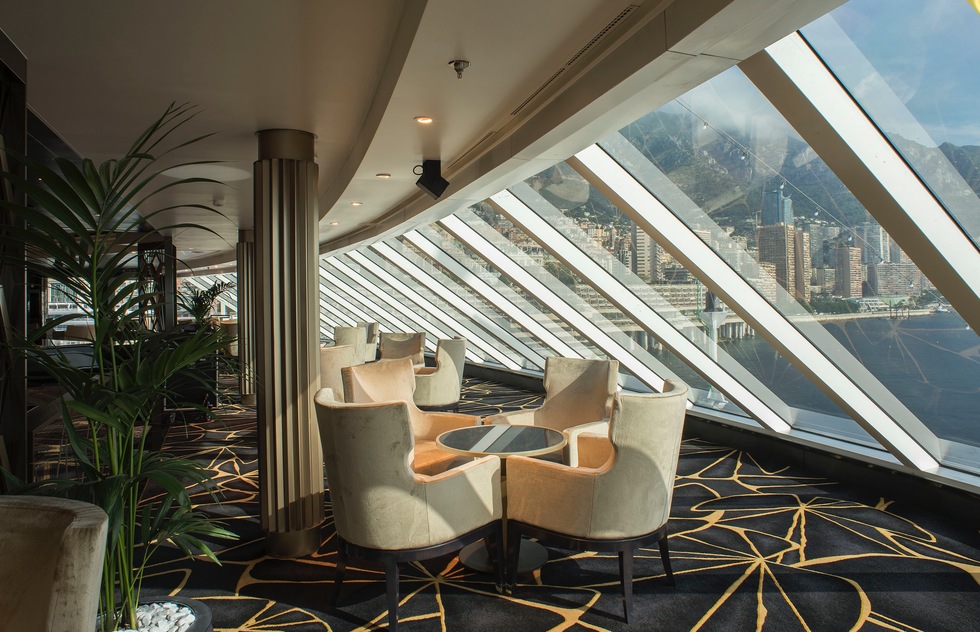 Regent Seven Seas
Observation Lounge
The Observation Lounge at the bow (front) of Deck 11 is a subdued lookout for table-service cockatils. By night, the area in front of its bar may double as a dance floor, not that the typical Regent customer belongs to the dance-until-the-wee-hours crowd. 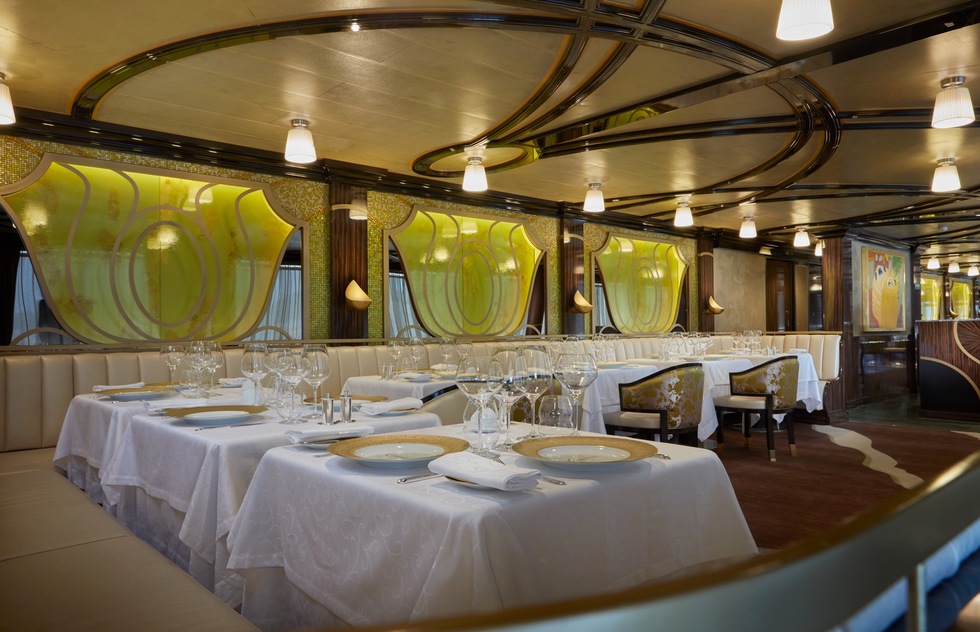 Regent Seven Seas
Chartreuse
There are several themed restaurants, all included in the fare. The main ones: Chartreuse (pictured) is for fine French cuisine (lots of foie gras), Prime 7 specializes in grilled meats like steak, and Pacific Rim is pan-Asian. The buffet option, La Veranda, is renamed Sette Mari in the evening, when it serves Italian dishes. 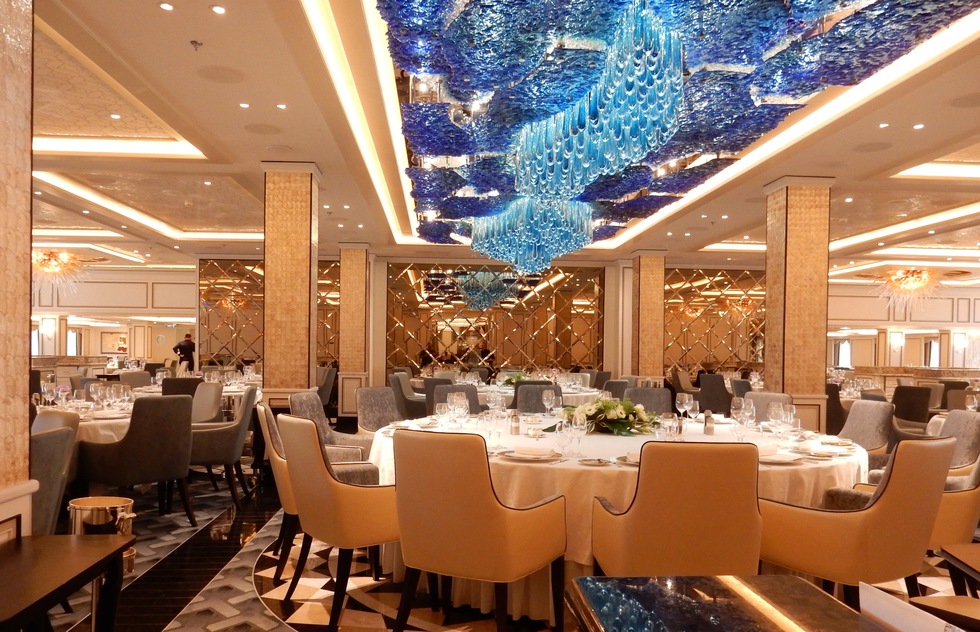 Jason Cochran
Compass Rose
The default restaurant—the one most of your dinners will be taken in—is Compass Rose. Breakfast, where there's a self-serve caviar station, is also served here as well as upstairs in the casual La Veranda buffet. 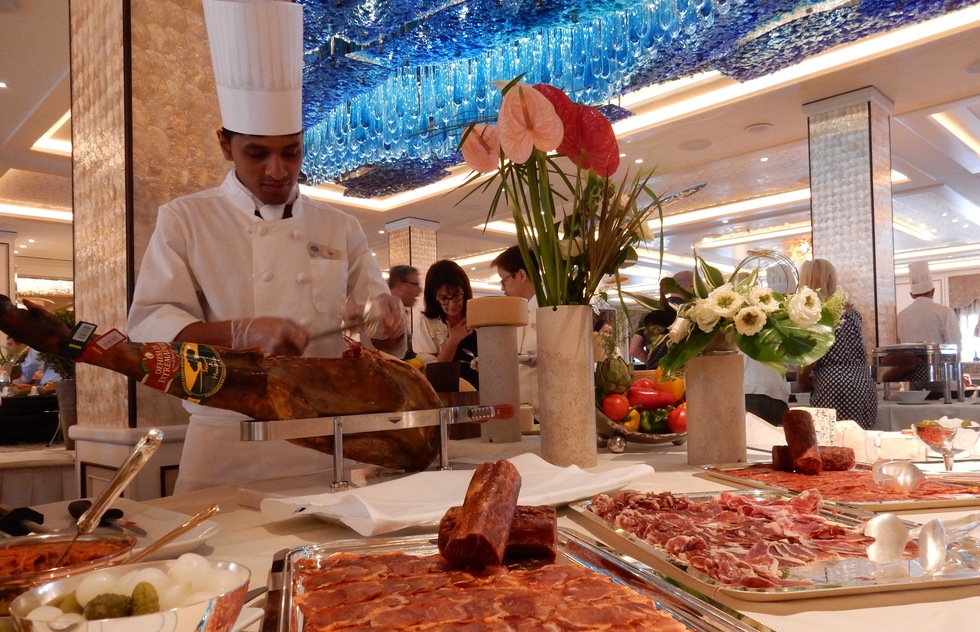 Jason Cochran
Buffet
Once every cruise, Compass Rose dedicates itself to a stupendously lavish buffet—lobster, crab legs, sushi, rare cheeses, carved meats, caviar. Many passengers consider it to be a highlight meal. And who wouldn't think so when you can stuff yourself with all the proscuitto and freely flowing champagne that you want? Everything you can consume, except the most premium alcohol, is paid for as part of your fare. 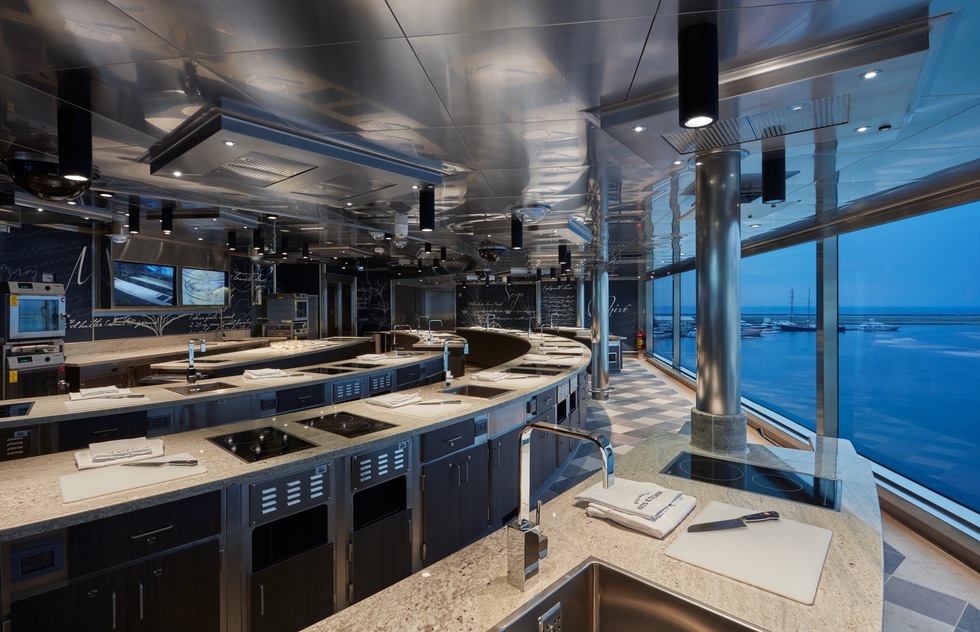 Regent Seven Seas
Culinary Arts Kitchen
Even beyond the restaurants, the Explorer emphasizes food. (When passengers are too experienced and well-off to demand a zip line or a skating rink, it's what a ship must do.) Off the pool area on Deck 11, you'll find the Culinary Arts Kitchen, a fully tricked-out, 18-station cooking classrom for hands-on gourmet learning experiences led by pedigreed chefs. On land, the theme carries over into Gourmet Explorer Tours, which are shore excursions that delve into local ingredients and recipes at the various ports of call—with lots of cooking and eating included. Those excursions are cultivated by on-board chefs, and their excitement for local dishes shows. Most shore excursions, certainly a majority in every port, are included in the cost of a cruise; Gourmet Explorer Tours may incur a surcharge starting at $80. 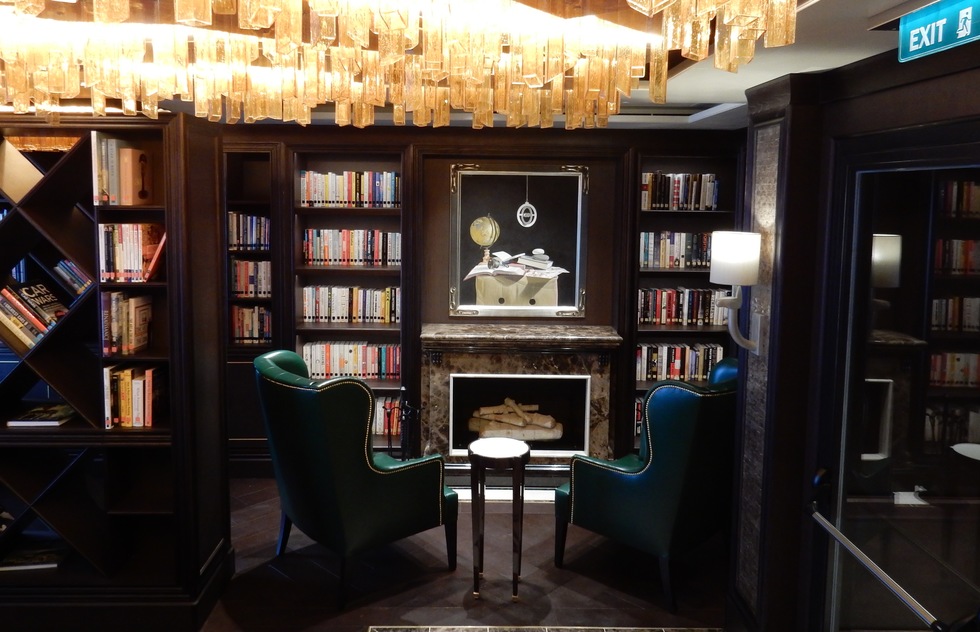 Jason Cochran
Library
The major cruise lines are eliminating libraries. They'd prefer you buy drinks and gamble instead of read. But the Explorer keeps a nice one, even if the quality of the selection is more mainstream than intellectual, befitting its patrons' penchant for poolside reads. 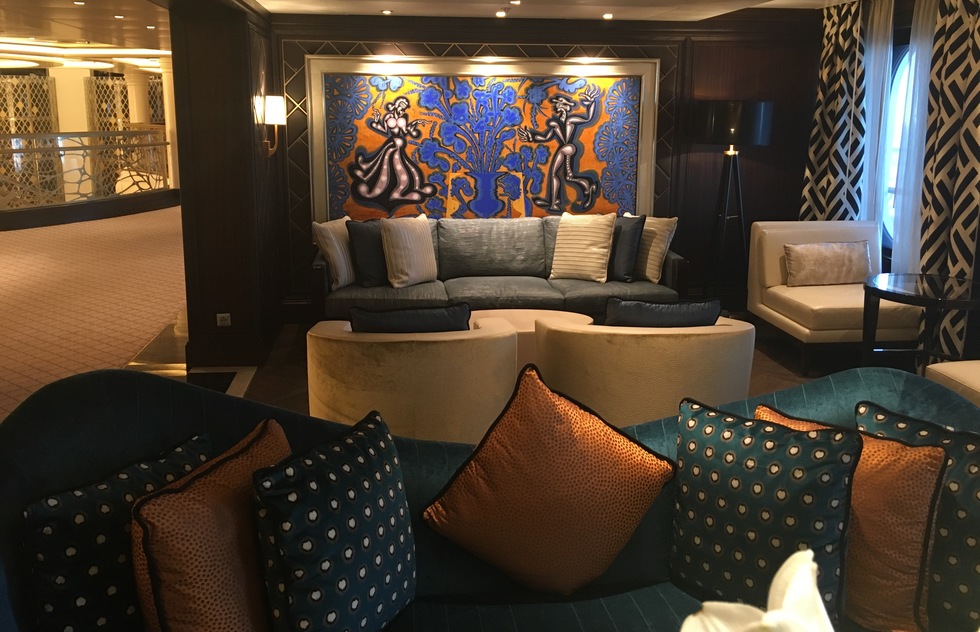 Jason Cochran
Lounge
Throughout the ship, there are plenty of places to sit, and unlike on cheaper lines, there aren't loudspeakers bolted into every available corner. That means it's easy to find places to get away. The Explorer lacks a low-level deck that permits passengers to go all the way around the ship while overlooking the ocean—they have to go up top for that—but the interior lounges are tastefully decorated with high-quality art, not schlock. 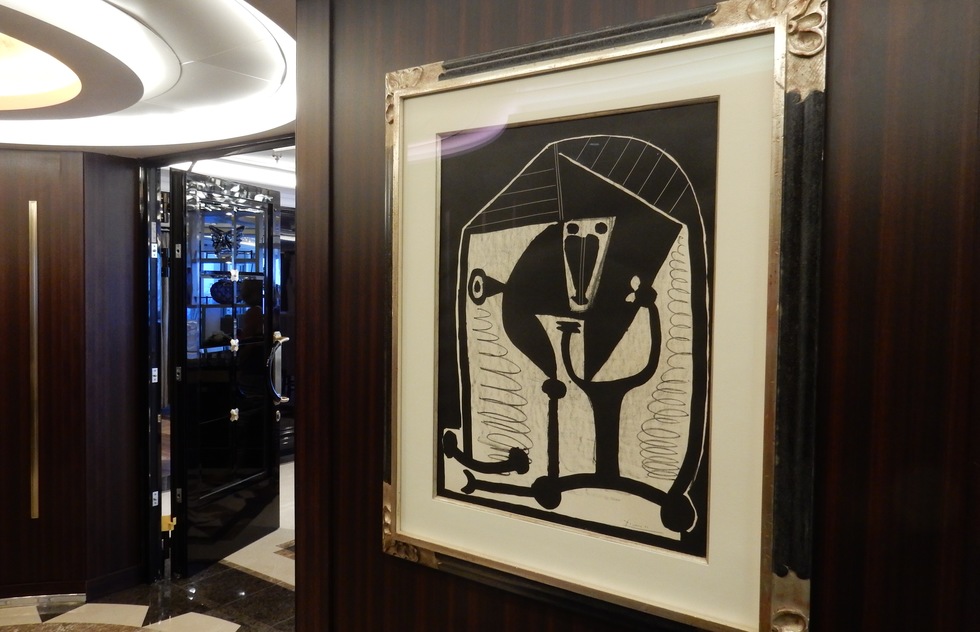 Jason Cochran
Picasso
Case in point: This lithograph by Pablo Picasso is one of a pair hanging in a corridor outside the ship's most expensive suite on Deck 14. There are works by other modern masters, including Marc Chagall, as well as contemporary greats, such as Spain's Eduardo Arranz-Bravo, scattered around, too. 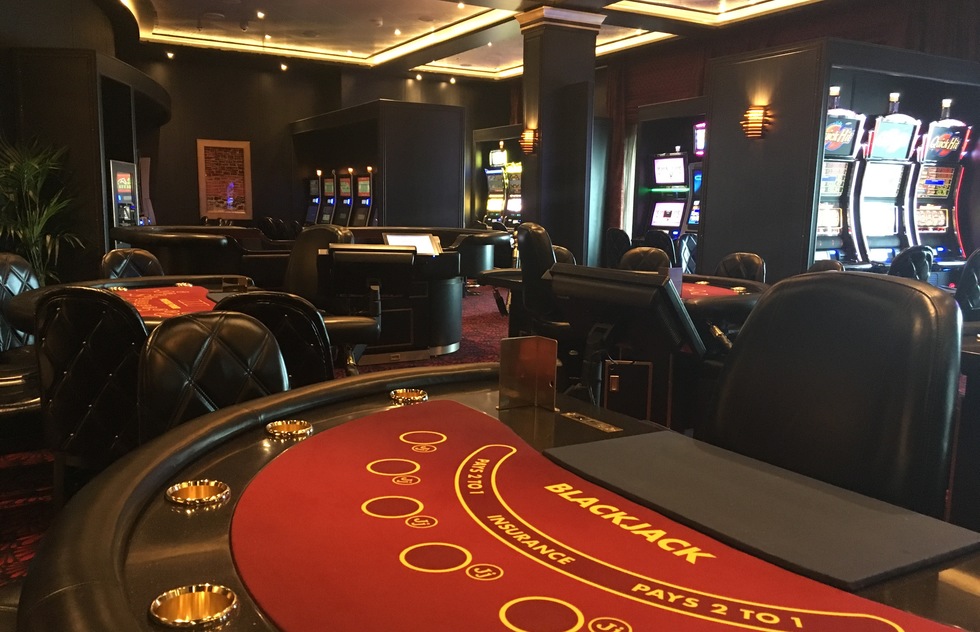 Jason Cochran
Casino
And, of course, there's a casino, although it's not large, not loud, and not obtrusive. It's angled more to James Bond fantasies than to penny slots. No children are allowed in here, but then again, there are none to shoo out. The line would never tell you that kids aren't welcome, but it in a way it already has: There's no kids' activity center, no arcade, no family pool. Any child who found himself on this cruise would spend much of the time in a blazer and trousers, feeling powerfully bored. 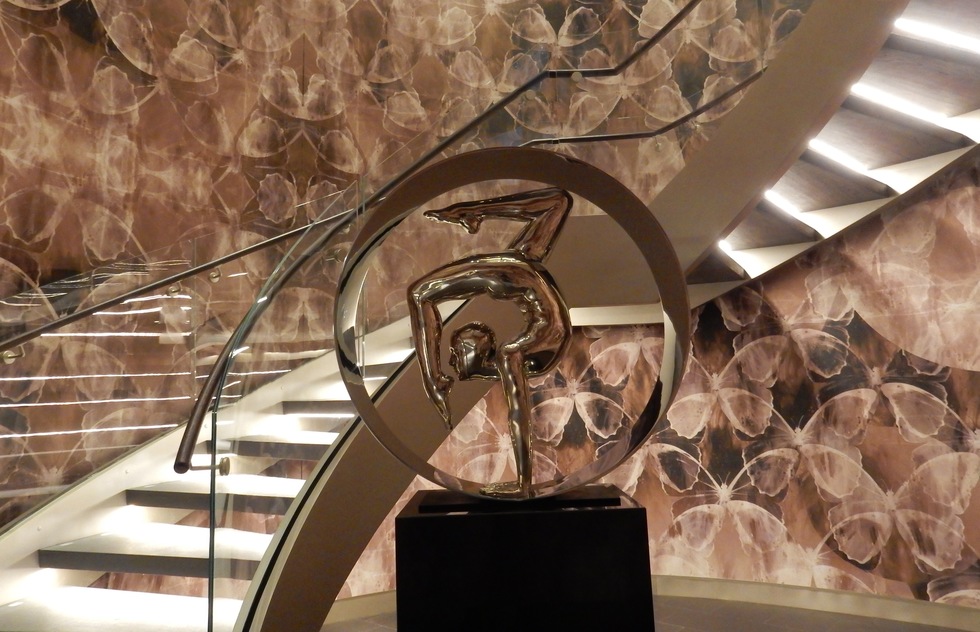 Jason Cochran
Canyon Ranch Spa
The spa isn't bespoke; instead it's run by Canyon Ranch, a popular operator you'll find on many ships and at many land-based resorts. Just outside of this one, there's a hair and nail salon (about $100 for a styling). Within, you'll find a partly covered infinity pool overlooking the stern of the ship, but it's mostly used after spa treatments, not for sunbathing.

A cruise on the Regent Seven Seas Explorer can cost around $10,000 (a single night in its top suite costs even more than that), and that's after the frequent two-for-one deals that most passengers seem to have used. For that high price, many things that other cruise lines charge for are taken care of—shore excursions, alcohol and champagne, WiFi, specialty meals, and, depending on your room category, even free ship-to-shore telephone time and a pre-cruise hotel. The most luxurious cruise ship ever built? Certainly debatable, especially since none of us was alive during the heyday of the great ocean liners. Incredibly luxurious? For that, there'd be less of a dispute.