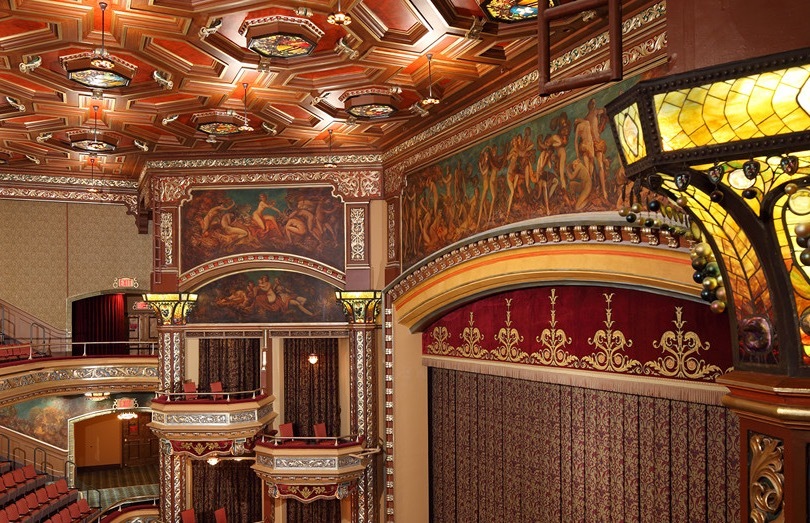 By Jennifer Ashley Tepper
Broadway’s 40 theatres (soon to be 41!) each contain a multitude of secrets, and many of them are designated historic sites. From the hidden speakeasy behind a wall panel at the Music Box to the intricate Tiffany glass panel ceiling at the Belasco, find out which exciting features you should seek out on your next trip to a show. 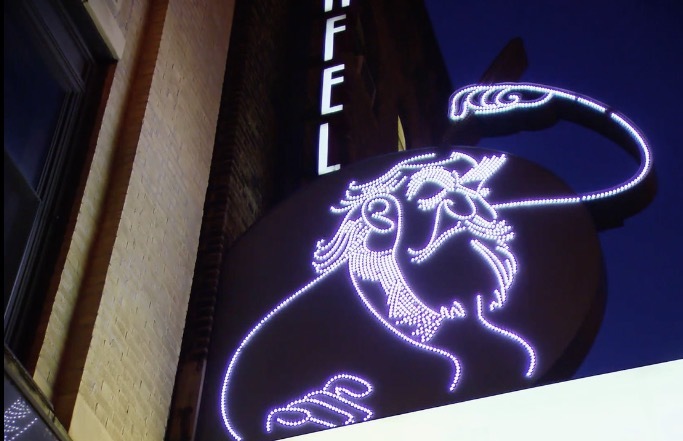 Spotlight on Broadway
Al Hirschfeld drawings at the Al Hirschfeld
Broadway’s Al Hirschfeld Theatre, on 45th Street just west of Eighth Avenue, used to be called the Martin Beck—an exterior box office window still bears the old name, as a matter of fact. In 2003, the house was renamed the Hirschfeld in honor of the most important caricaturist and cartoonist in Broadway history, whose career drawing theatrical personalities spanned eight decades. The building's walls are adorned with a collection of distinctive Hirschfeld drawings, many of which were originally published in the New York Times. The first drawing you'll see, though, is outside on the marquee (pictured): a Hirschfeld of Hirschfeld. In the venue’s mezzanine-level lobby, check out 22 re-creations of famous line drawings of shows and performances from the very theater you’re standing in. 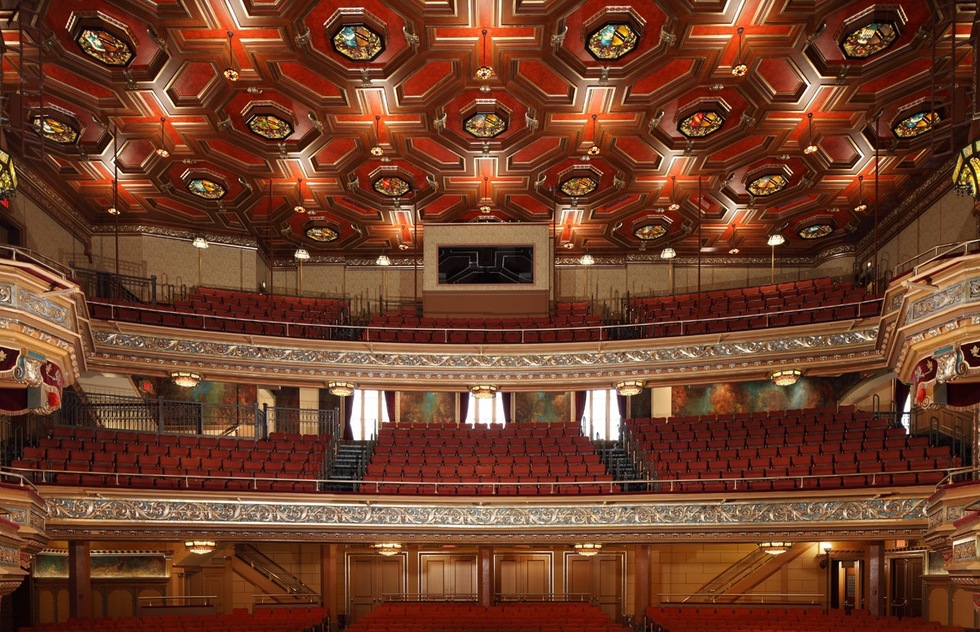 Whitney Cox, Shubert Archive
Tiffany glass-paneled ceiling at the Belasco
Theatrical impresario David Belasco was close friends with Charles Lewis Tiffany, and so the Belasco, built in 1907, is filled with original fixtures and glasswork designed by the jewelry legend (not to be confused with stained-glass artist Louis Comfort Tiffany). Only ticket buyers will be able to view the full glory of the ceiling at the Belasco: 22 octagonal ceiling panels featuring ideographs of Shakespeare, Sheridan, Racine, Tennyson, Goethe, Goldsmith, and Molière—all great poets and playwrights. Shakespeare actually appears in all of the panels. To clean them, custodians have to lower them to stage level, gently scrub each panel, raise them back up, and replace their bulbs. It takes three workers two days to clean the whole thing. These panels were covered by paint for years, which was removed with Q-tips only in 2009 during a renovation. 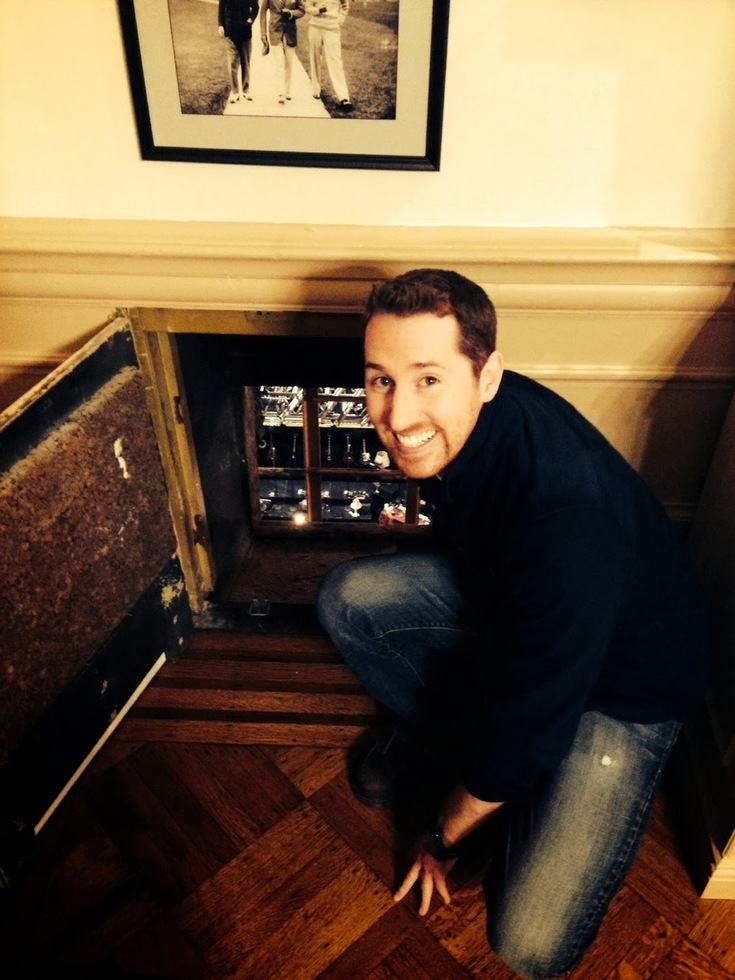 Tim Dolan, Broadway Up Close Tours
Shubert Archive at the Lyceum
When producer Daniel Frohman built Broadway’s Lyceum Theatre on 45th Street, he included an office for himself, as well as an extensive scenery shop, on the top level. Today, this is the Shubert Archive, filled with historic treasures. There are still some features from the scenery shop and penthouse office’s original use, including a peep window facing the stage. When Frohman’s wife Margaret Illington appeared in a play at the Lyceum in 1907, he watched her through the portal, and if he thought she was overacting, he would wave a white handkerchief. (This photo is of Tim Dolan, the leader of Broadway Up Close theatrical history walking tours, getting an insider's look at the century-old window.) The Lyceum’s innovative scenery shop rooms are now filled with aisles of irreplaceable costumes, orchestral books, libretti, and much more. It’s used by academics, but if you have a legitimate reason to study its materials, librarians may invite you in. 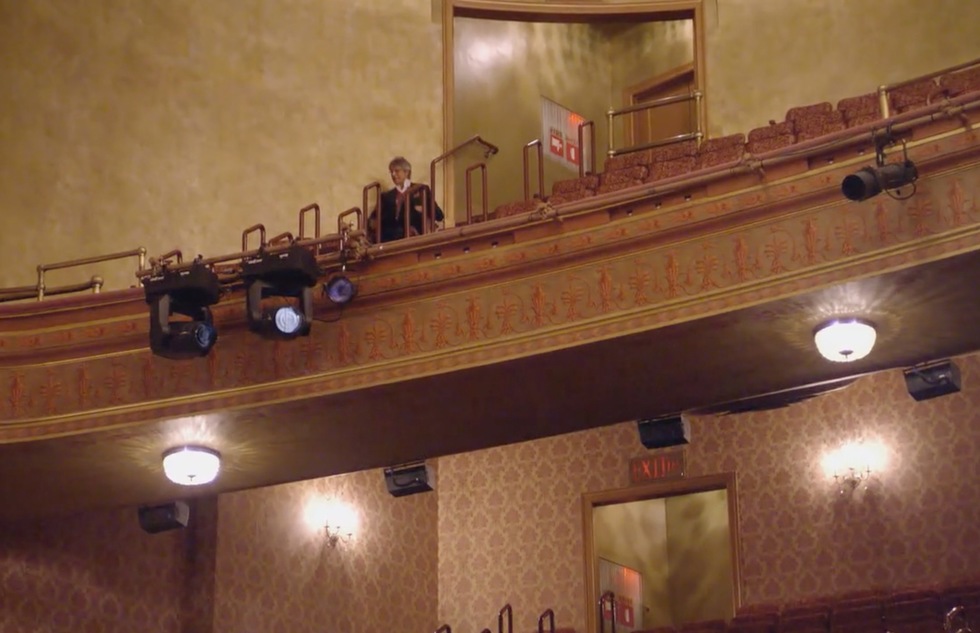 Spotlight on Broadway
The "Tommy Tune seat" and the famous orchestra staircase at the St. James
The St. James has what insiders call “the Tommy Tune seat.” In the last row of the balcony, on the house-right side, there is one seat placed by the wall by itself. The Tony-winning Tune saw Hello, Dolly! from that seat as a kid, and years later, he would insist on working from the spot while staging My One And Only—once he had a look at his work from up there, he’d have to hike down several floors to go star in the show. It’s also his favorite seat as a spectator, so if you see something at the St. James, you may spot him sitting there. The famed orchestra staircase at the St. James is another feature of the building that seems ordinary but has had an extraordinary existence. For a century, artists working at the St. James have crowded around the stairs on house left to make changes to their shows and watch the audience watch them. From Susan Stroman during The Producers to Rouben Mamoulian during Oklahoma!, every St. James director has held court on the stairs that you, too, can visit when you go see a show there. 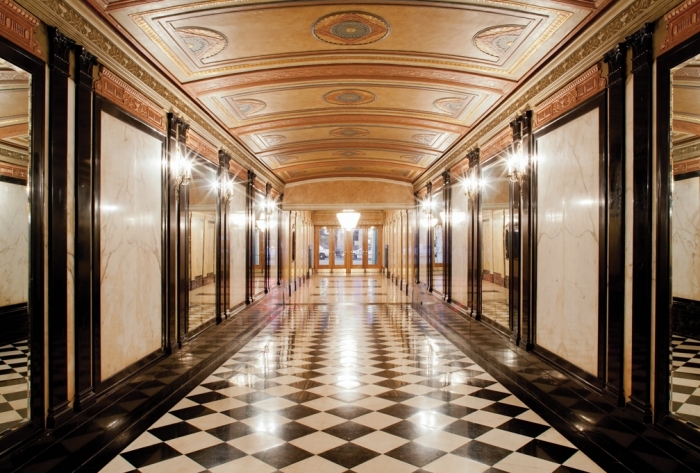 Great Places Directory
"Ghost box office" and Apollo Link at the Lyric
The Lyric Theatre was created in 1998 by combining two abandoned Broadway houses, the old Lyric and the Apollo, into one. Neither had been in steady use as theatrical venues since the 1930s. The structure that opened on 42nd Street in 1998 was originally called the Ford Center, and it incorporated elements of both houses that had occupied its space. As such, a couple disused "ghost" areas remained on site, built into the real estate, but with no real purpose in the new structure. On 43rd Street, to the left of the theater’s exit doors, sits an unused box office area. The Ford was initially intended to have box offices on both 42nd and 43rd Streets, but when the 43rd Street one proved unnecessary, it was abandoned. The 42nd Street side of the structure has an abandoned space as well: the Apollo Link. To the left of the theatre’s entrance, there is a long, dimly lit hallway. This was once the entrance to the bygone Apollo Theatre. Now it’s an emergency exit for the new venue and a lost piece of Times Square history. Looking almost exactly as it did as far back as the 1910s, with marble floors, mirrored walls, sconces, and intricate ceiling décor including chandeliers, the Apollo Link is accessible only by those already inside the Lyric Theatre. 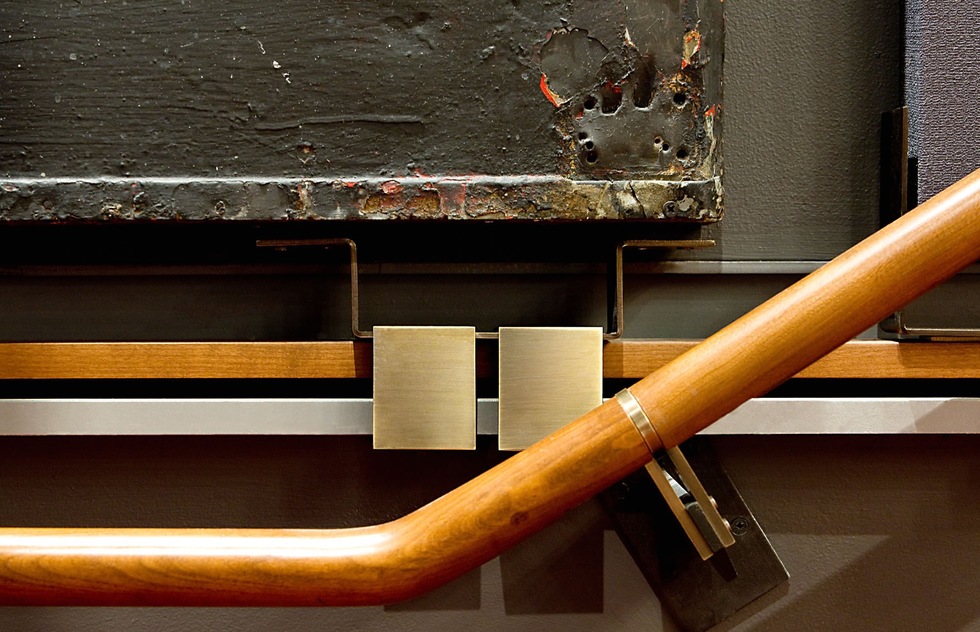 COOKFOX
Pieces of the Henry Miller's at the Sondheim
In 1918, Henry Miller’s Theatre was built on 43rd Street. For 50 years, the venue housed some of Broadway’s most prized plays until it fell into disuse and became an adult movie cinema, a disco, and a series of other lowbrow operations. In 1998, Roundabout Theatre Company reclaimed the shabby old Henry Miller's for its Cabaret revival starring Alan Cumming, and from 2001 to 2014, Urinetown occupied the decrepit house, a perfect fit for its dystopian aesthetic. After that, the theater underwent a five-year overhaul. Today, the Sondheim Theatre has Henry Miller’s exterior but a revamped interior that nevertheless incorporates elements of the original. Look closely as you explore and you'll find 100-year-old doors lining the auditorium walls and decorative elements in the lobby. The spirit of the old theater still lives within the new one. 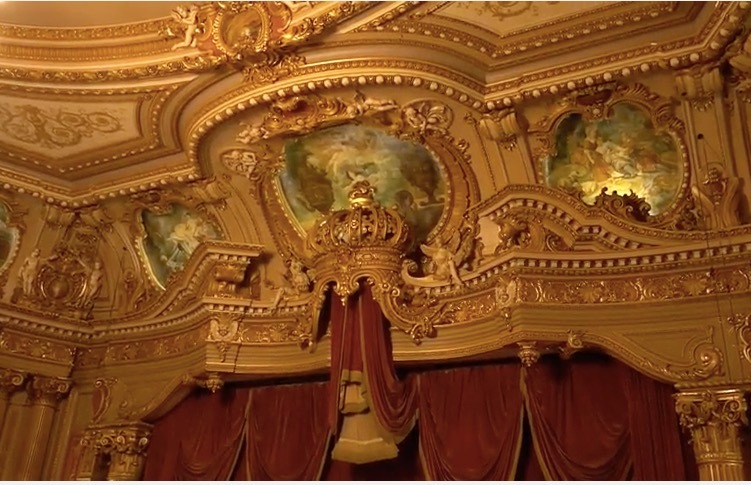 Jason Cochran
The Mark Hellinger Theatre at the Times Square Church
On 51st Street sits one of Broadway’s most extravagant theaters: the Mark Hellinger. These days, it's known as the Times Square Church. After a string of flops, the Nederlanders sold the stage that had brought the world the original productions of Jesus Christ Superstar and My Fair Lady. Since 1989, the church has kept the house in impeccable shape—both its interior and exterior are landmarked—and it could presumably become a Broadway house again someday. But for now, it can only be seen during a church service. The huge, gorgeous, three-story lobby is as luminous as ever. The entire place is burnished in shades of gold and rose, and every room is filled with stunning details, like a fireplace in the lower lobby and an old-style ticket-takers’ desk in the main foyer. 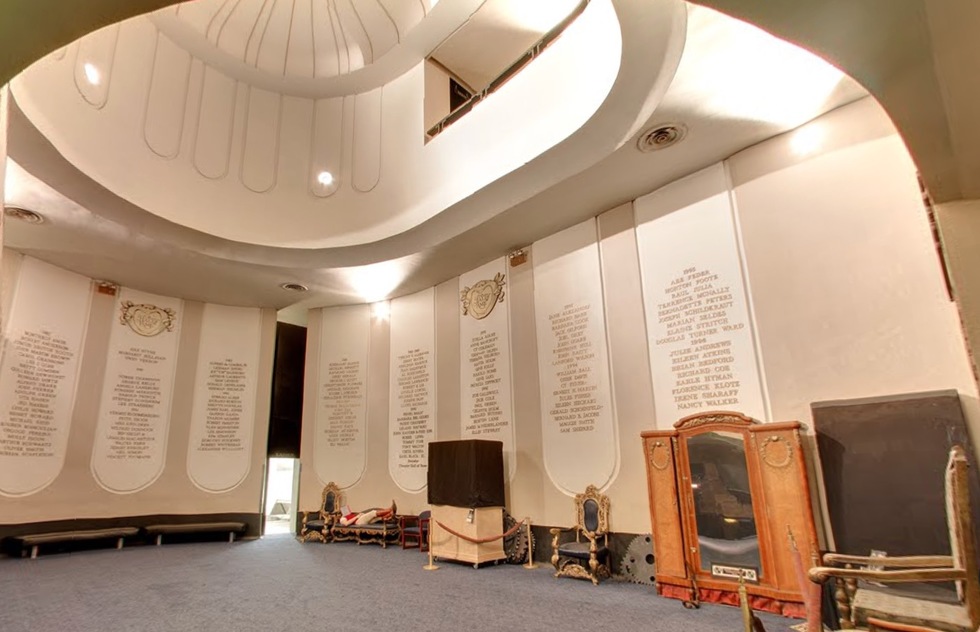 Theater Hall of Fame at the Gershwin
The Gershwin is home to the Theater Hall of Fame, the only nationally recognized site honoring lifetime achievement on the American stage. Each year, eight new luminaries are inducted based on their credits and contributions to the art form. When you enter the Gershwin, take the escalators up to the rotunda level, where you'll find giant wall plaques listing all Hall of Fame honorees, as well as photos, props, and scripts. There are artifacts tied to everyone from Bernadette Peters to Lynn Fontanne. As a special bonus, retired scenic pieces from Wicked—a Gershwin Theatre resident—are on display. 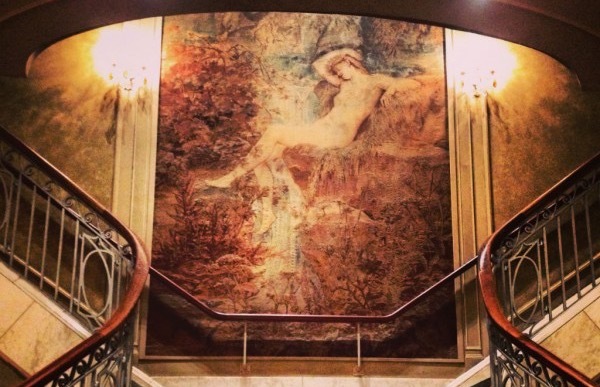 Archive
Speakeasy at the Music Box
When songwriter Irving Berlin built the Music Box Theatre for his Music Box Revue in 1921, he had a secret wall panel built into his office. These were the days of Prohibition, and alcohol was imbibed secretly in a small bar, away from prying eyes. Today, the mini speakeasy is part of the house manager’s office. The rest of the theater, which has seen performances ranging from Humphrey Bogart to Paul Newman, is a jewel of 1920s design and its intimate proportions make it a favorite among performers.