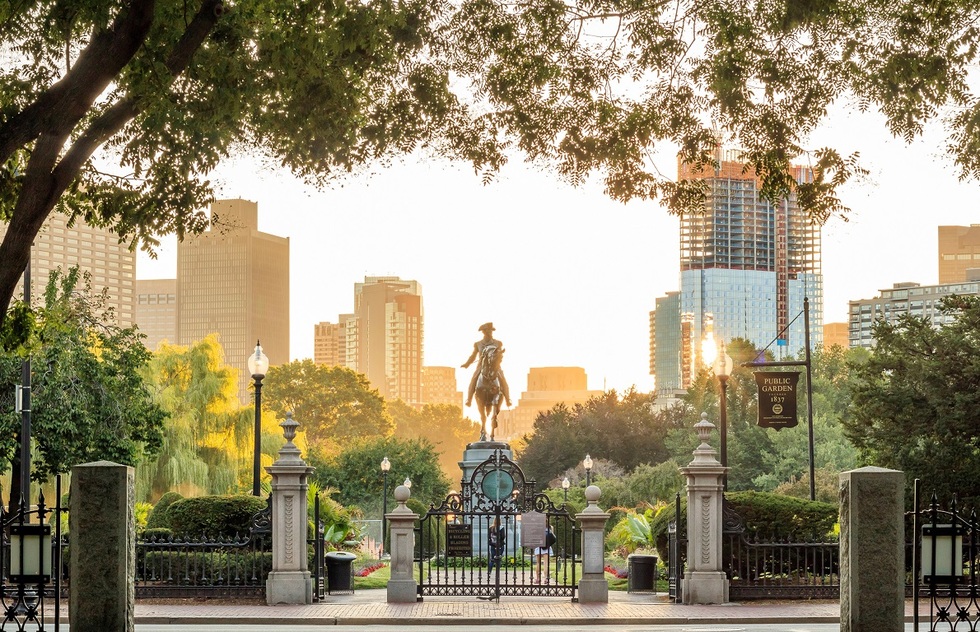 By Shakeema Edwards
Boston has long been a lighthouse attracting history buffs to its historic sites. As the epicenter of the American Revolution, the city's Fourth of July celebrations are extravagant, and with free tours and admission-free monuments and museums available year-round, there's never a bad time to visit Boston for an affordable, educational, and entertaining trip.
But trying to see all of historic Boston in one trip can be overwhelming. Between the city’s Freedom Trail—a 2.5-mile walk through downtown Boston—and its Black Heritage Trail—a 1.6-mile walk through Beacon Hill—there are 31 historic places, landmarks, and monuments. If you don't have 3 hours to complete both trails, here are a few must-see sites. 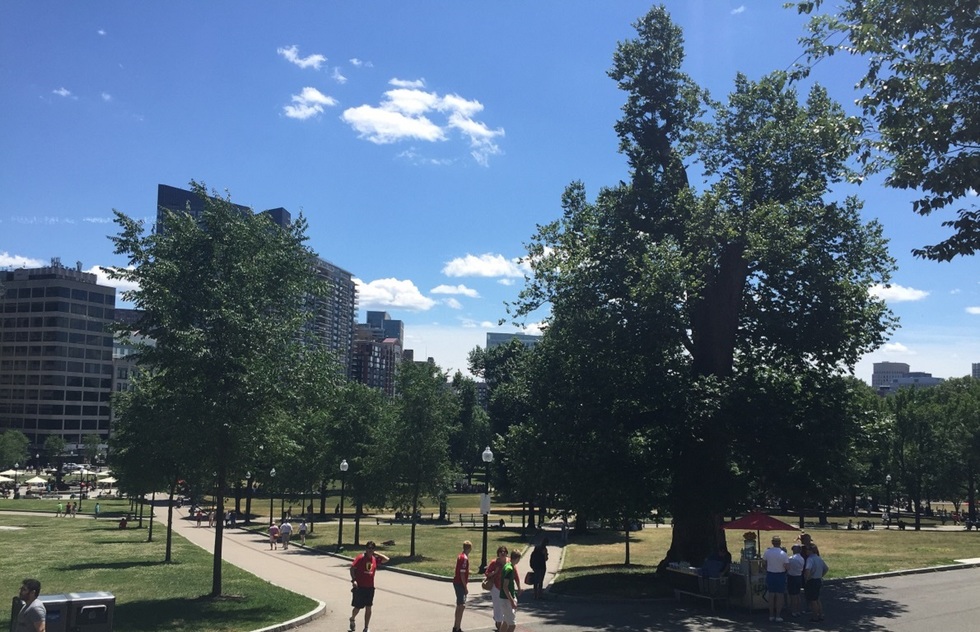 Shakeema Edwards
Boston Common
The Freedom Trail begins at the Boston Common, and—as any fan of The Sound of Music knows—the beginning is a very good place to start. Established by the Puritans in 1634, the Common is considered the country’s oldest public park. In its almost 400 years of existence, it has served many purposes: The Puritans used it until the early 19th century to graze livestock and as a place to hang criminals and dissenters. For the Redcoats, it was a camp and training ground during the Revolutionary War. In 1965, Martin Luther King Jr. led a 2 ½-mile walk from Roxbury to the Common, and once there he spoke on the “Freedom Struggle in Boston” before 22,000 marchers.
Today, the park’s 45 acres are still a site for protests and speeches, but are largely used for recreation. Littered with dozens of plaques, monuments, and memorials—including the Declaration of Independence Plaque, the Lafayette Monument, and the Boston Massacre Memorial—the park is ideal for a photo scavenger hunt. 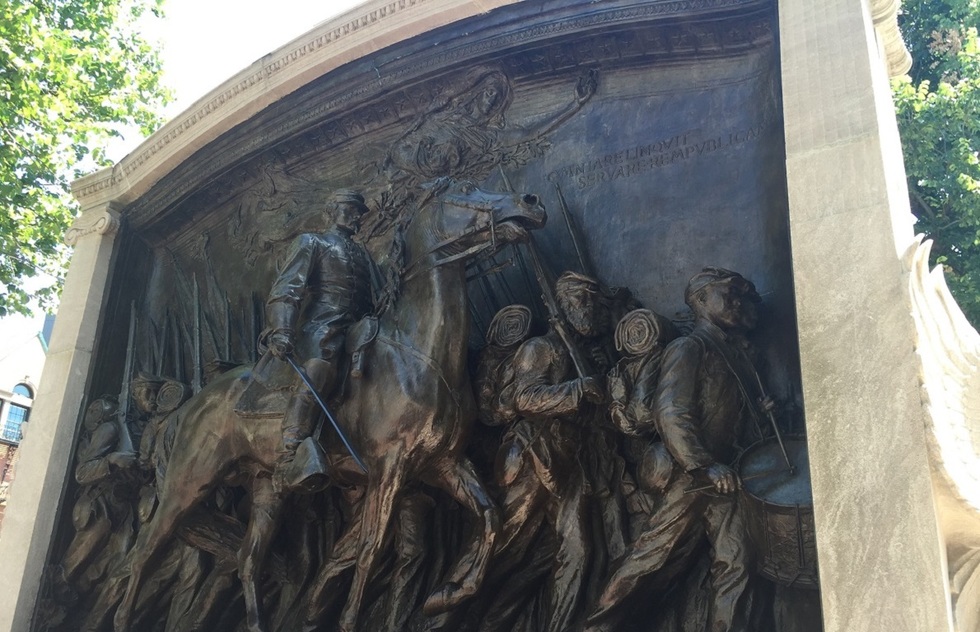 Shakeema Edwards
Robert Gould Shaw and the 54th Regiment Memorial
If you’ve seen Glory, the 1989 film about Colonel Robert Gould Shaw—the son of wealthy Bostonian abolitionists—and the 54th Regiment of Massachusetts Volunteer Infantry—the Union Army’s first black unit—then you might have glimpsed this memorial in the end credits.
At the edge of the Boston Common, on the corner of Beacon and Park streets, this is the first stop on the Black Heritage Trail. Sculptor Augustus Saint-Gaudens took almost 14 years to complete this bronze memorial, which commemorates Shaw and the 54th Regiment. The soldiers, led by Shaw on horseback, are shown embarking from Boston on May 28, 1863. Marching down Beacon Street, they headed to South Carolina, where many —including Shaw—lost their lives at the Second Battle of Fort Wagner. The inscription in the right-hand corner sums up the soldiers' heroism: “Omnia Relinqvit Servare Rempvblicam” (He left behind everything to save the Republic).


Though heavily wounded in battle, Sergeant William Harvey Carney fought to keep the American flag out of Confederate possession. For his bravery, he received the Medal of Honor and is considered the first African-American recipient of that award. 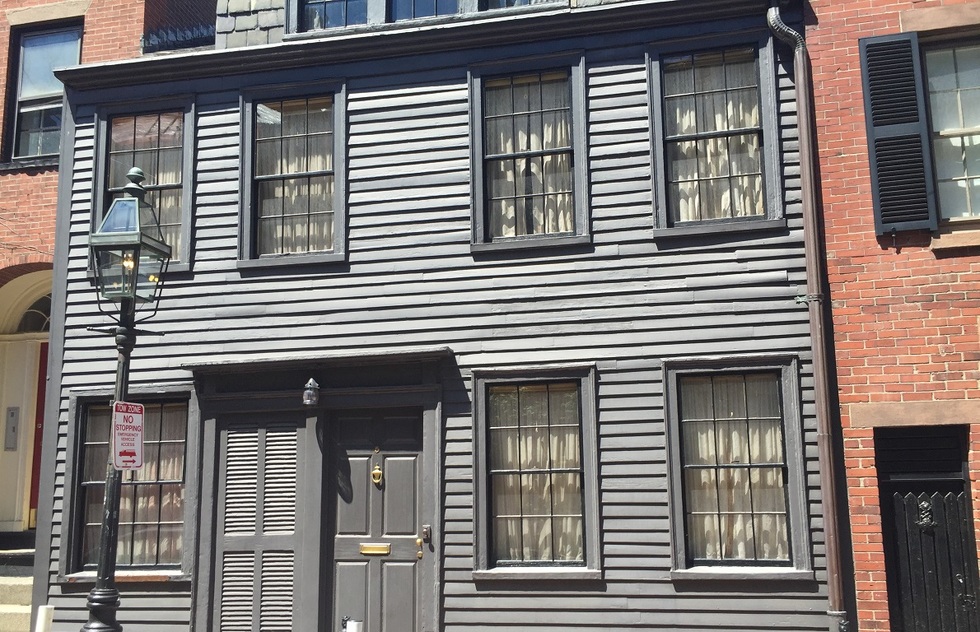 Shakeema Edwards
Pinckney Street
The red brick rowhouses, with their dusty window panes and louvered shutters, and the few quaint wooden structures still standing make Pinckney Street one of Beacon Hill's most captivating thoroughfares. The George Middleton House (pictured) has stood at 5 Pinckney Street since 1787 and is considered the oldest home on Beacon Hill. Its original owner, who led an all-black Patriot militia company during the Revolutionary War, helped to organize the Boston African Benevolent Society and was one of the earliest African-American activists in the area.
John J. Smith, whose Federal-style house still stands at 86 Pinckney Street, was an African-American state legislator, serving in the Massachusetts House of Representatives in 1868, 1869, and 1872. Smith, an abolitionist who also fought for equal school rights, lived to see his daughter Elizabeth teach at the Phillips School. Located at the corner of Pinckney and Anderson streets, Phillips—named after Boston’s first mayor, John Phillips—was among the first schools in Boston to integrate. 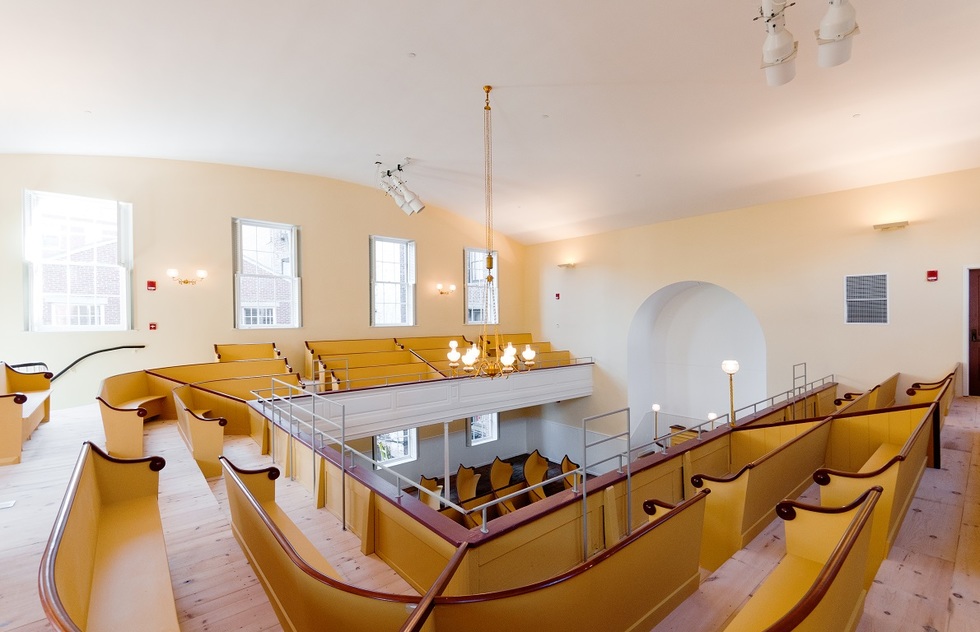 Shawmut Design & Construction / Flickr
Museum of African American History
The Boston branch of the Museum of African American History occupies two historic buildings. At 46 Joy St., the unimposing Abiel Smith School stands tucked between taller, more modern buildings, while the three-story African Meeting House, or First Independent Baptist Church (pictured), stands behind it.
The Meeting House, once the heart of the city’s black community, holds the double distinction of being the first African-American Baptist church north of the Mason-Dixon Line and of being the country’s oldest existing black church building. It was here that white abolitionist William Lloyd Garrison founded the New England Anti-Slavery Society; here, too, that Frederick Douglass spoke out against slavery and recruited soldiers for the 54th Regiment. For almost 30 years, the first floor of the meeting house served as a community school for children. The African School, which began in 1798 the home of Revolutionary War veteran Primus Hall, eventually moved next door and became the Abiel Smith School, the first building in the country constructed for the public education of black children. 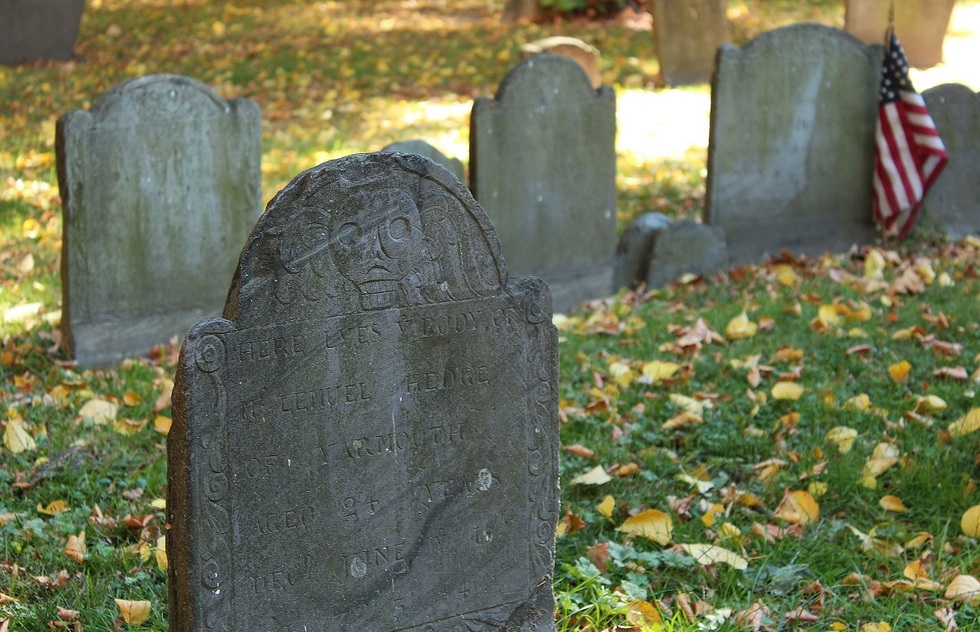 Robert Linsdell / Flickr
Granary Burying Ground
Walking along Tremont Street, the striking greenstone grave markers sprinkled among fading slate gravestones are sure to catch your attention. Founded in 1660 as a result of overcrowding at the nearby King’s Chapel Burying Ground, the cemetery is the final resting place of a number of historic figures from Boston’s colonial and Revolutionary eras. While only an estimated 2,300 headstones stand in the cemetery, the number of dead buried here is almost double that figure due to mass burials. The five victims of the Boston Massacre, including Crispus Attucks, are buried together in the southeastern corner of the grounds. The grave immediately next to theirs belongs to Samuel Adams, one of three signers of the Declaration of Independence interred here (the other two are John Hancock and Robert Treat Paine). A 25-foot-tall granite obelisk marks the Franklin family tomb, where Benjamin Franklin’s parents and siblings are buried, but he’s in Philadelphia.
Another reason to visit the ground, which is open daily and free of charge, is to see the archaic Puritan iconography—winged death’s head, soul effigies, etc.—carved into the markers. 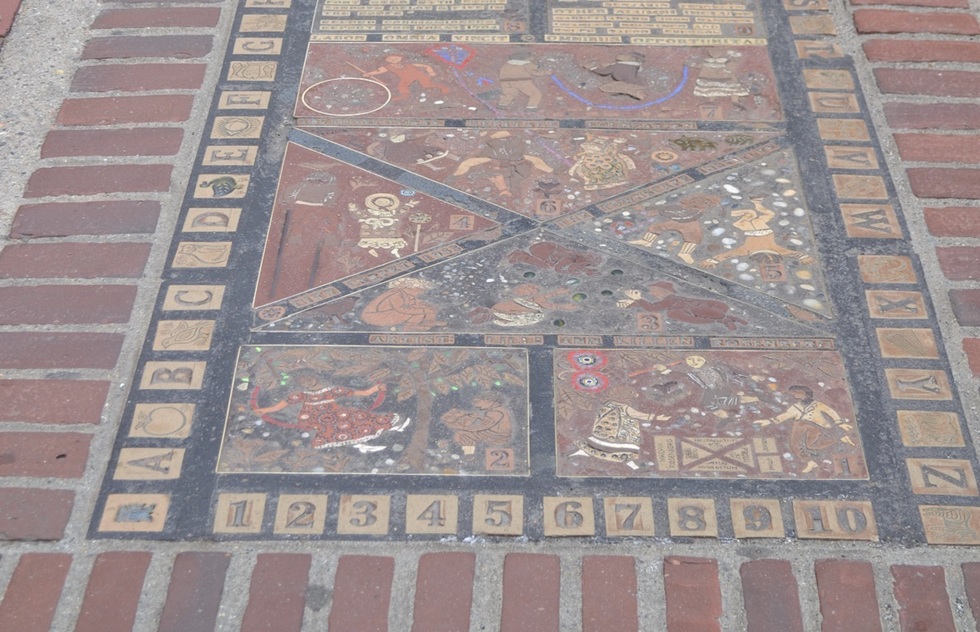 Clare / Flickr
First Public School Site
The country’s oldest public school began as an all-boys’ high school in 1635 in the home of its first headmaster, Philemon Pormort. Ten years later, Boston Latin School’s first building was constructed on School Street, where classes were held for about 100 years. During that time, Cotton Mather, Samuel Adams, Benjamin Franklin, John Hancock and other notable figures spent their formative years at Boston Latin, learning Latin, Greek, and the humanities.
The Boston Latin School is now in its fourth building and has long relocated from downtown Boston to the Fenway neighborhood. All that remains to commemorate the original schoolhouse, which was torn down to accommodate the expanding King's Chapel, is a sidewalk mosaic (pictured). On a brisk walk down School Street, you can easily step right past this collection of images, which show children jumping rope, swinging from trees, and reading. 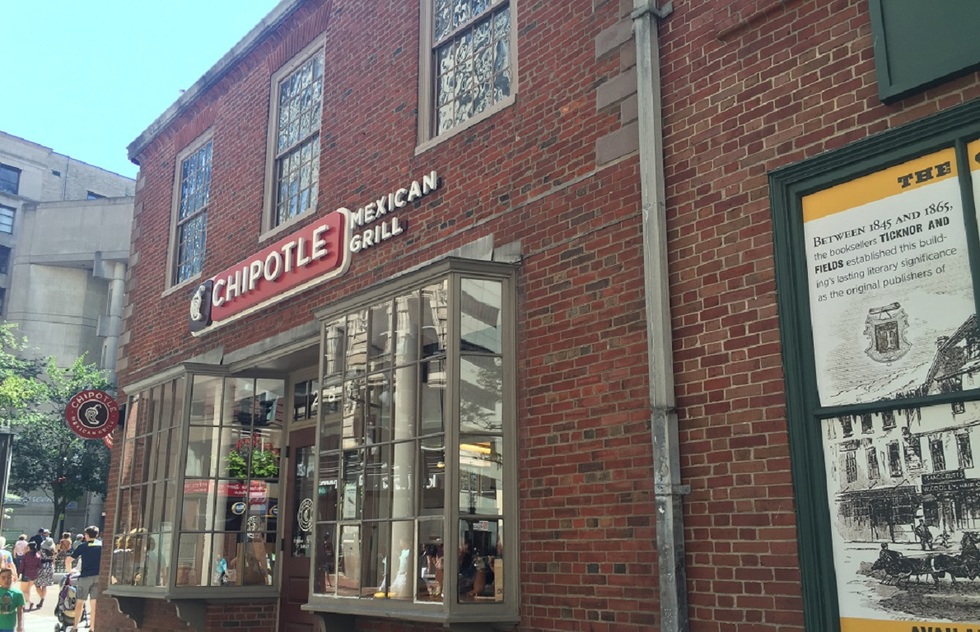 Shakeema Edwards
Old Corner Bookstore
Now leased and operated by Chipotle, this building, and the land it occupies, has a storied history. The land was originally bought by Anne Hutchinson's family in the mid-1630s. Here, Anne held weekly Bible meetings where she espoused beliefs that challenged Puritan doctrine, ultimately leading to her exile from the Massachusetts Bay Colony.
The Hutchinson house was lost in the 1711 blaze that also claimed the first Meeting House and the Boston Town House. After serving as an apothecary shop for many decades, the building became the Old Corner Bookstore in 1829. Much later, booksellers Ticknor and Fields published the works of literary giants like Harriet Beecher Stowe, Louisa May Alcott, and Nathaniel Hawthorne, and often hosted the authors on the premises. So you can order a charred chorizo in the same spot where the likes of Dickens, Emerson, and Thoreau discussed ideas. 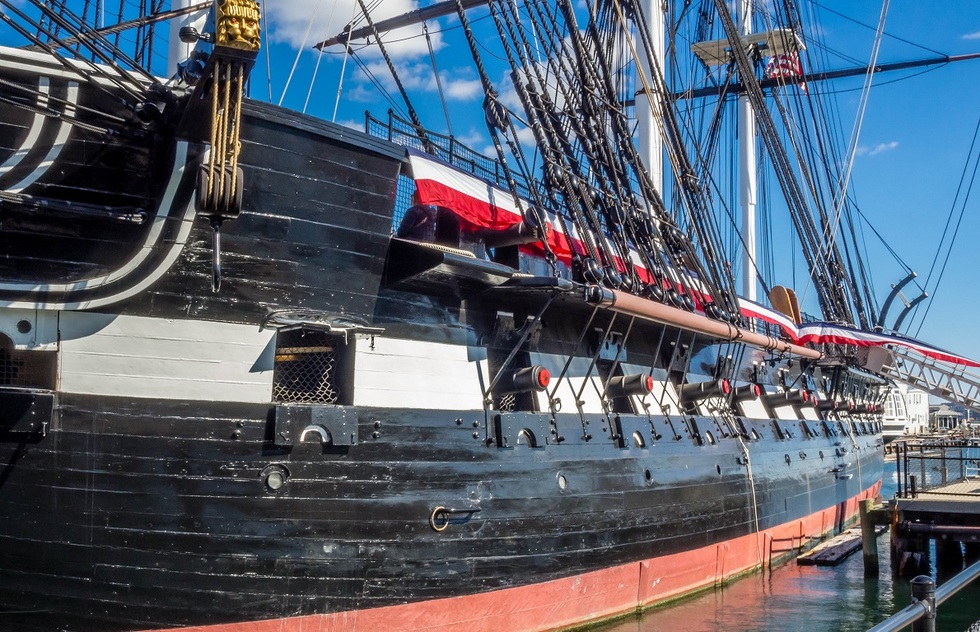 ctj71081 / Flickr
The USS Constitution
Head down to the Charleston Navy Yard and climb aboard the world’s oldest commissioned warship, today a museum. The USS Constitution, which launched from Boston Harbor in 1797, is one of the six original frigates that made up the U.S. Navy. In its early years, the ship sailed to the West Indies and fought in the Quasi-War with France and in the Barbary Wars, but the Constitution made a name for itself, and earned a lasting nickname, in the War of 1812.
During a 35-minute shootout with Britain’s HMS Guerriere, a sailor witnessed 18-pound cannonballs bouncing off of the Constitution’s oak hull, leaving nary a scratch. In his surprise, the soldier exclaimed, “Huzza! Her sides are made of iron!” With that statement, the Constitution was branded “Old Ironsides,” and its 33-0 battle record shows that the name was well-deserved. 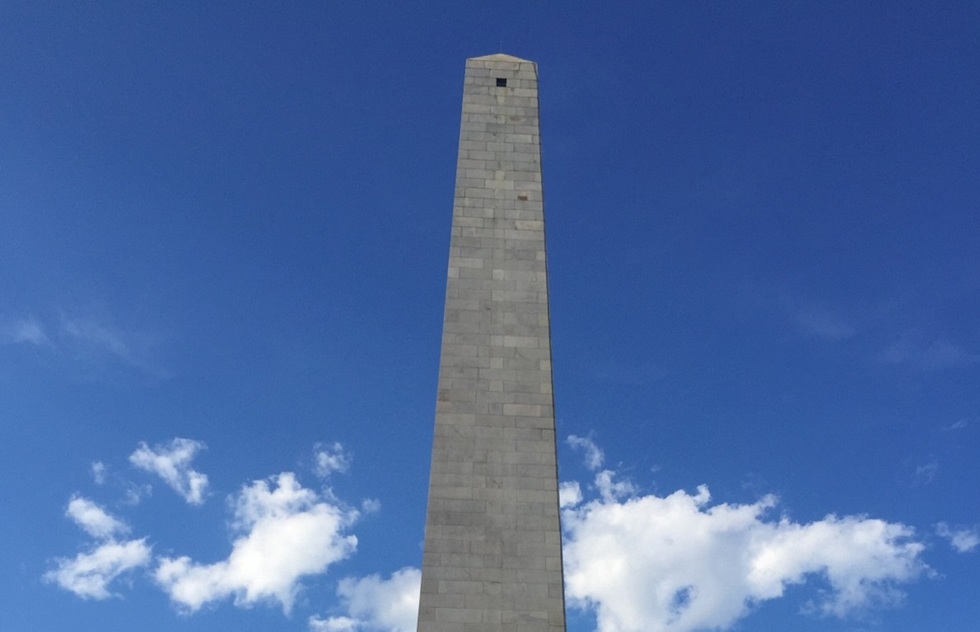 Shakeema Edwards
Bunker Hill Monument
This 221-foot granite obelisk marks the site of one of the earliest battles in the Revolutionary War. On June 17,1775, the colonial militia and the larger, better-trained British Army engaged in a David-and-Goliath-like encounter, with the scrappy militia, despite its low ammunition, managing to halve the British forces. Ultimately, the Redcoats won the battle, after three assaults on Breed’s Hill, where most of the fighting actually occurred. But the resilience of the colonial militia was not soon forgotten by either side and inspired colonial forces.
Fifty years after the battle, the cornerstone of the monument was laid on Breed’s Hill by the Marquis de Lafayette, a Frenchman who didn’t fight at the Battle of Bunker Hill but was a pivotal figure in other decisive battles in the Revolutionary War. The monument took 17 years to complete, and you can climb all 294 steps to the top for a spectacular view of Boston.
Family & Kids
National Parks
Vacations