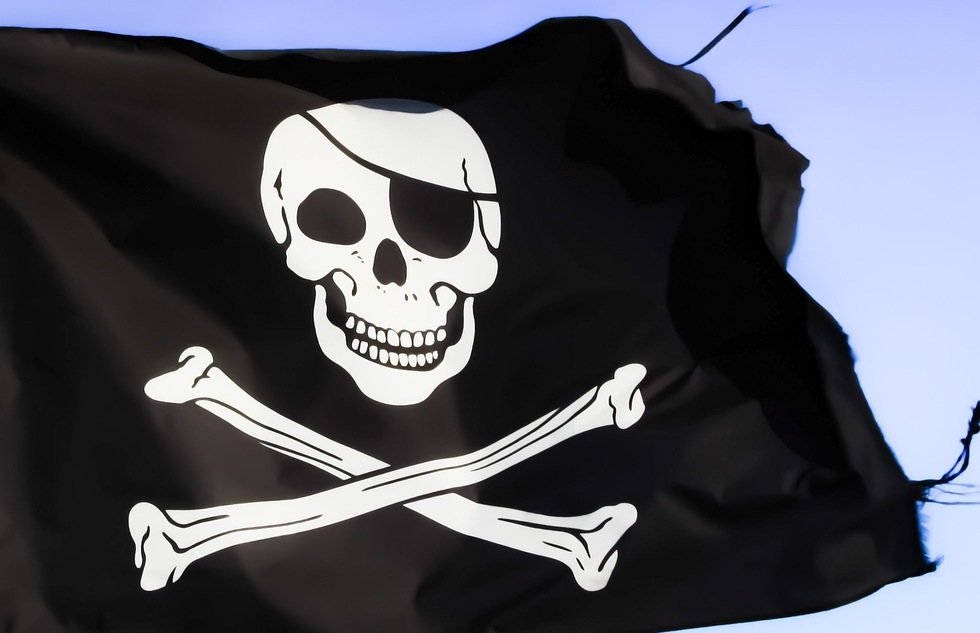 The Caribbean really was a hotbed of piracy at one time—especially during the 17th and 18th centuries, when Europe-bound ships laden with goods from North and South America were easy pickings for enterprising buccaneers. Of course, the popular image of pirates hobbling around on peg legs, sporting parrots on shoulders, saying things like “shiver me timbers,” and wearing copious amounts of eyeliner owes less to reality than to fictional creations such as Long John Silver of Treasure Island and Johnny Depp’s Captain Jack Sparrow of Disney’s Pirates of the Caribbean movies.

Separating hard truth from colorful legend isn’t always easy in the Caribbean today—if Blackbeard really slept in all the places where he’s said to have bedded down in island towns large and small, the famous marauder must have had a serious case of narcolepsy. But there are still places where you can find genuine traces of the region’s piratical history, along with fun ways to celebrate the myth. So hoist the Jolly Roger and get out those treasure maps: We’re setting sail in search of the real-life pirates of the Caribbean. 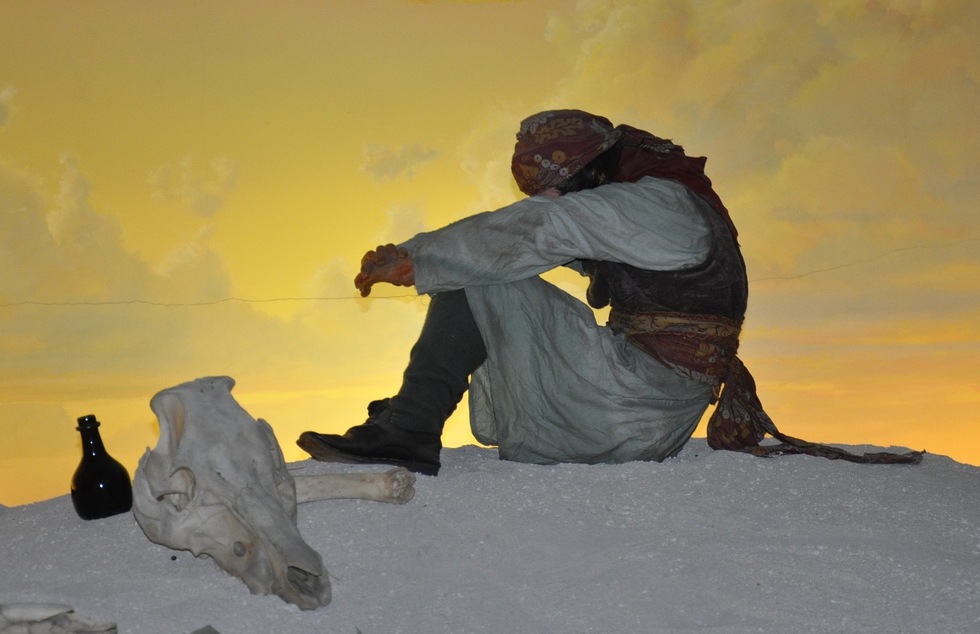 Now the capital city of the Bahamas and a perennial pit stop for cruise ships, Nassau became a pirate stronghold in the early 18th century, owing to its prime location amid trade routes, shallow waters ideal for quick-moving ships, and weak colonial governance by the British. In fact, for about a dozen years starting around 1706, lawless freebooters had the run of Nassau’s island, New Providence, until the crown finally reasserted control. You can get a feel for that wild era at the interactive Pirates of Nassau museum, which features a moonlit replica of Nassau’s harborfront as it looked in 1716; artifacts such as cutlasses, flags, and pistols; and waxwork tableaux showing the exploits of raiders on the high seas, unfortunates marooned on desert isles (pictured), and female pirates Anne Bonny and Mary Read dividing loot on a beach. Later, visit the city’s hilltop Fort Charlotte to gaze out over the harbor and try to imagine frigates in place of Carnival Fun Ships. 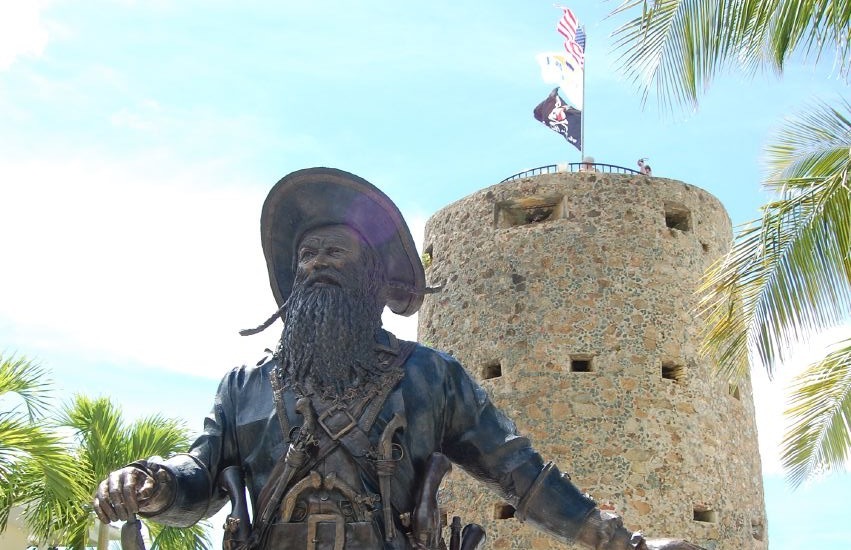 One of the few real-life pirates to rival the fictional ones in notoriety is Englishman Edward Teach, better known as Blackbeard for his prodigious facial hair. In the first two decades of the 1700s, he terrorized the shipping industry of the West Indies and along the Virginia and Carolina coasts, until the British navy finally caught up with him—and decorated the prow of his own warship with his severed head. Many sites throughout the Caribbean claim an association with Blackbeard, but it’s hard to confirm those assertions; marauding outlaws tend not to leave much of a paper trail. One of the most prominent points of interest is Blackbeard’s Castle, a national historic landmark in the red-roofed city of Charlotte Amalie on the island of St. Thomas in the U.S. Virgin Islands. Local lore holds that the infamous pirate used the 17th-century watchtower (pictured above, along with Blackbeard's statue) as a lookout. Supporting evidence is nil, but the panoramic view from the top of the tower is a doozy. As for the location of Blackbeard’s fabled buried treasure, your guess is as good as ours. 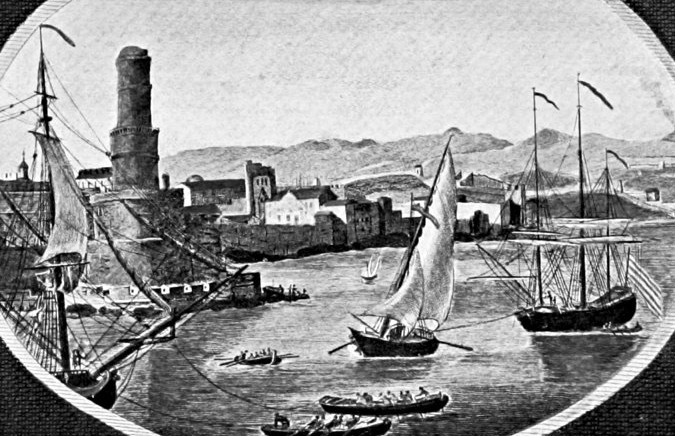 You’d never guess it today, but in the latter half of the 17th century the sleepy fishing village of Port Royal on the southeastern coast of Jamaica (about 19 miles south of Kingston) was one of the Western Hemisphere’s largest and liveliest cities—and the Caribbean’s undisputed capital of vice. Made a safe haven for pirates by the island’s British colonial government in exchange for protection from the Spanish navy, the place was overrun with buccaneers, brothels, and bars, the latter serving oceans of a notorious rum about as potent as lighter fluid. There aren’t many signs of Port Royal’s rowdy past today (for reasons we’ll get to next), though the town’s history, including its run as a pirate’s paradise, is recounted at the Institute of Jamaica in Kingston and at Port Royal’s Fort Charles Museum, located on the ground floor of the only still-standing military fortification in a city that once had half a dozen.

What happened to the others? Well, that’s another story . . .

Pictured above: an illustration of Port Royal in its 17th-century heyday 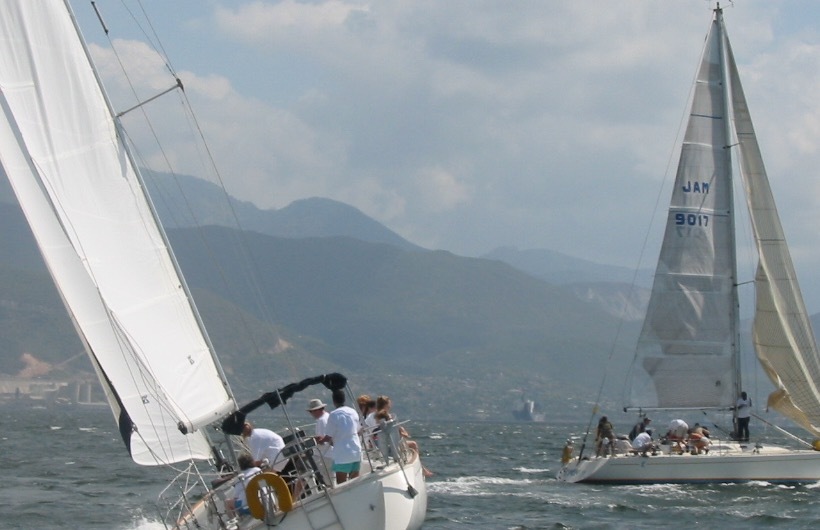 On June 7, 1692, a severe earthquake and subsequent tsunami hit Port Royal with a powerful double whammy from land and sea that sucked whole buildings into the sand and rinsed away two thirds of the city, along with hundreds of people, in mere minutes. More than one contemporary commentator saw the event as divine punishment for the city’s sins. Ever since, the watery ruins of the destroyed section of Port Royal have remained under the surface in a remarkably well-preserved state, like some Pompeii of the deep. It’s possible to go scuba diving in the sunken city, but because of the site’s archeological importance, you’ll need special permission from the Jamaican government (contact a local dive operator for more information).

Pictured above: Yachts in Kingston Harbour 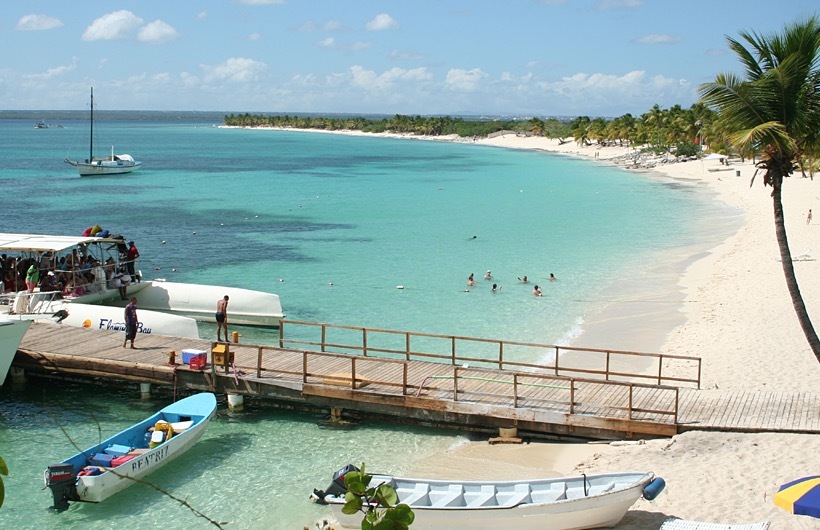 For more than 300 years, generations of treasure hunters, legal authorities, and, later, historians wondered what happened to the Quedagh Merchant, a ship that was captured and then abandoned by Captain William Kidd, a Scottish privateer executed for piracy by the British in 1701. When a snorkeler finally discovered the shipwreck in 2007, researchers confirmed that it had been hiding all that time under only 10 feet of crystal-clear water just off the coast of the Dominican Republic’s tiny Catalina Island (pictured). Now the site has been named a Living Museum of the Sea, where those on snorkeling and diving excursions can swim past the hull of the ship, barnacled cannons, and the significant populations of coral and fish that have taken up residence over the centuries. 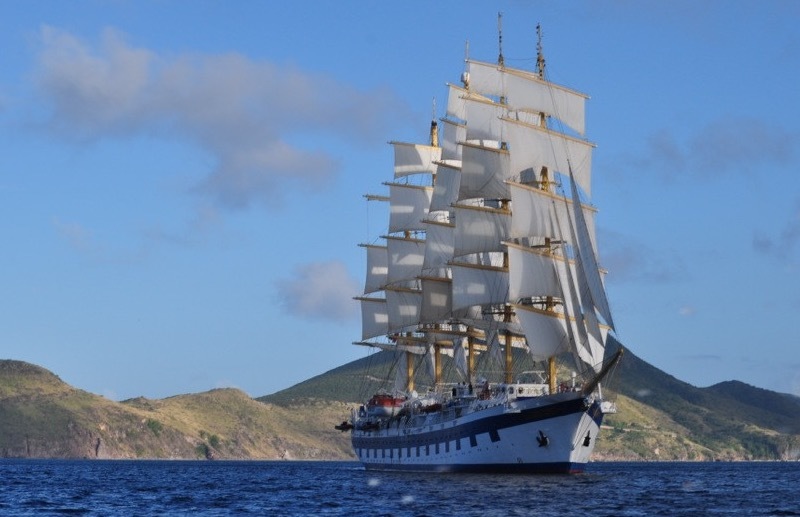 To taste what life was like aboard one of these vessels, take a ride on a traditionally rigged tall ship, one of the beautiful, large-masted wooden schooners and frigates that can make you feel like you’ve stepped into a J.M.W. Turner watercolor. There’s no shortage throughout the Caribbean of harbor cruises and anchored ships to check out (a good option for the seasickness-prone). But for the full effect—surrounded by open sea, sails flapping, decks creaking, salt air stinging, mutiny brewing—you can take a cruise lasting several days, such as those available from Star Clippers, one of whose ships is pictured above. Another line, Island Windjammers, offers a weeklong pirate-themed experience in the Grenadines, with stops at spice islands and historical sites, swashbuckling contests, tales of nautical derring-do, and lots and lots of rum. 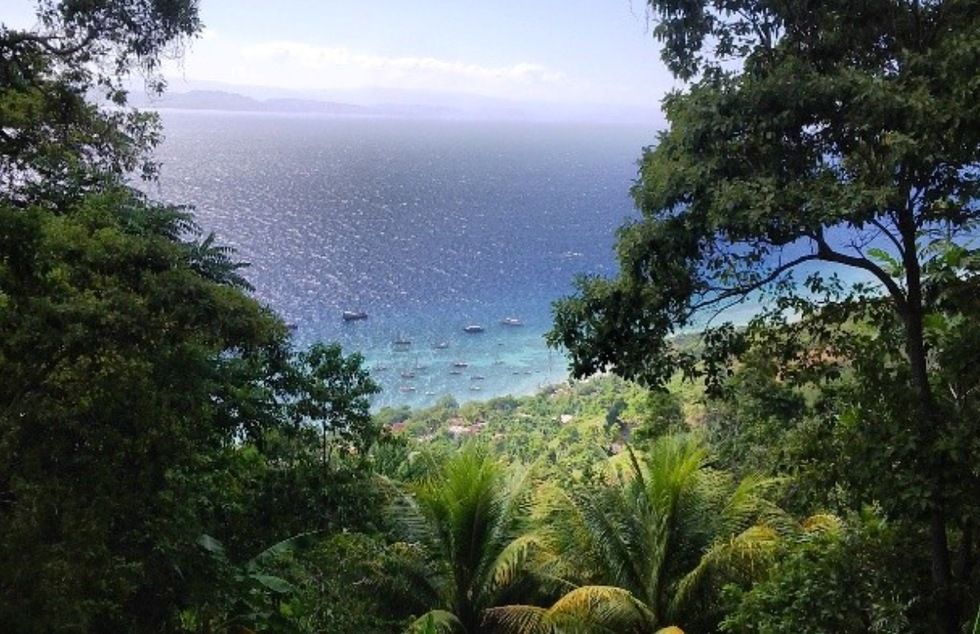 Another major stronghold from piracy’s gory glory days in the 17th century is Tortuga, a small rocky island just north of Haiti (Christopher Columbus conferred the name, after the Spanish word for “turtle”). An international band of thieves didn’t just occupy this speck in the Caribbean—they fortified it, too, building the 24-gun Fort de Rocher to keep Spanish forces from nearby Hispaniola (present-day Haiti and the Dominican Republic) at bay. Pirates eventually lost control of Tortuga, and today only the fort’s hillside foundation remains. To visit the island, you’ll need to take a ferry from Port-de-Paix. That'll transport you to a wild landscape of caves, coves, and unspoiled beaches with not a soul in sight. 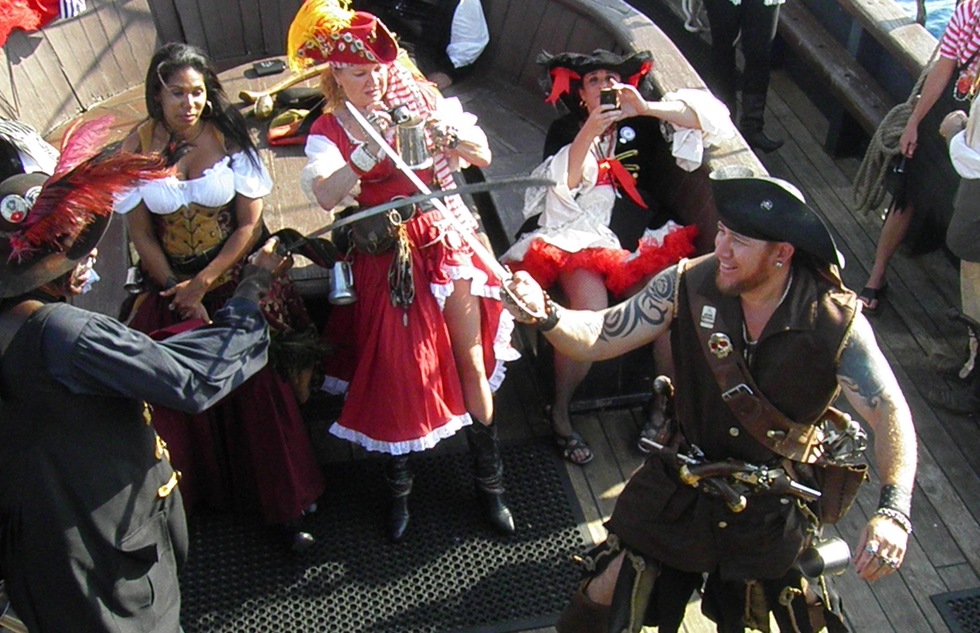 The McGee / Flickr
An Annual Pirate Invasion of the Caymans

Each November, the Cayman Islands become the epicenter of wannabe sea banditry during the Pirates Week Festival, a tradition stretching back four decades. There are mock beach invasions, parades, fireworks, street parties, food and drink specials, underwater treasure hunts, costume contests for humans as well as dogs, and more people growling “yarr” than you could shake a cutlass at. Meanwhile, steel pan music, craft stalls, and traditional cuisine acquaint visitors with other cultural aspects of the three islands in the mini chain: Grand Cayman, Little Cayman, and Cayman Brac. 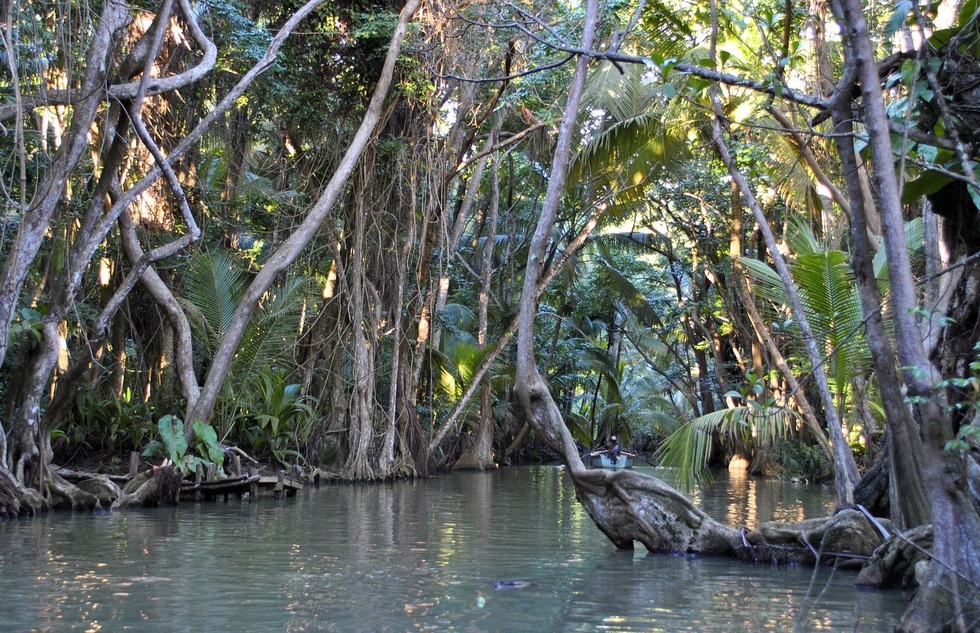 Despite its title, Disney’s hugely successful Pirates of the Caribbean series has been shot all over the world, in locations—and in front of green screens—in Los Angeles, Australia, Hawaii, and even Utah (that state’s Bonneville Salt Flats served as the wasteland known as Davy Jones’ Locker in At World’s End). That’s not to say, though, that the Caribbean ended up entirely on the cutting room floor. The island of St. Vincent stood in for Port Royal (series star Johnny Depp stayed at the Young Island Resort), several seafaring scenes were shot in the Bahamas, and the Castillo San Cristóbal in San Juan, Puerto Rico, shows up at the beginning of the fourth installment, On Stranger Tides. A photogenic coastline, rugged interior, and absence of overdevelopment made Dominica in the Lesser Antilles another attractive option. In Dead Man’s Chest, it’s the cannibal-filled isle where Orlando Bloom’s Will Turner is suspended in a cage over a gorge. Those scenes were filmed in the Morne Trois Pitons National Park, a lush preserve with jungle, waterfalls, hot springs, and a volcano.

Pictured: a rainforest in Dominica