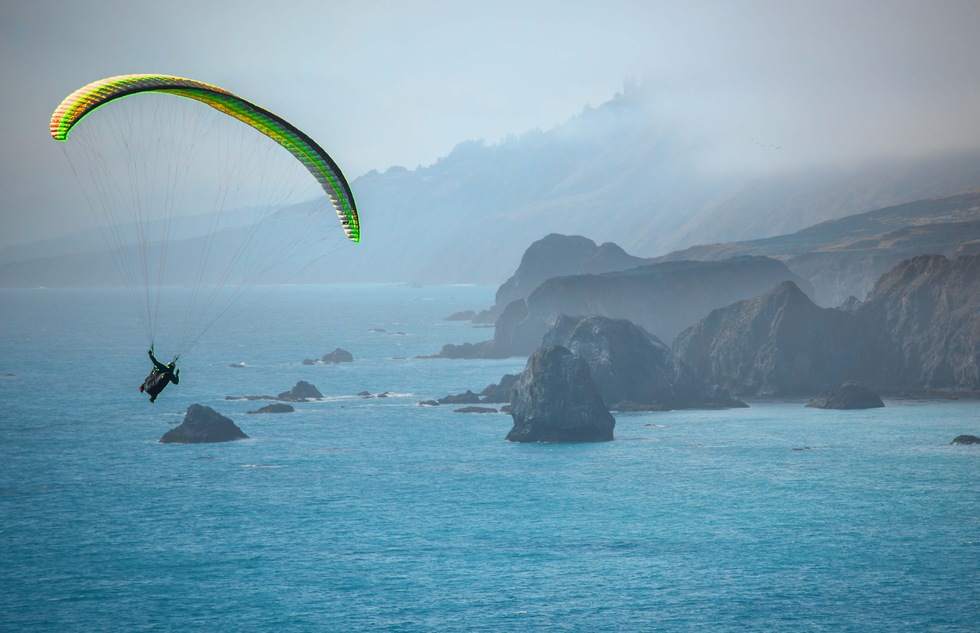 California State Parks That Would Be National Parks Anywhere Else

There are eight U.S. national parks in California—more than in any other state except Alaska, which ties it. From the iconic waterfalls and granite cliffs of Yosemite to the stark desert expanses of Death Valley and the rugged seascapes of the Channel Islands, California’s octet of federal preserves show off an impressive range of natural beauty.

But here’s the thing: In California, even the state parks are awe-inspiring. Far from the picnic-table-near-some-trees model adopted elsewhere in the country, California offers visitors to its state parks the chance to ride waves near unspoiled beaches, marvel at ancient redwoods and desert wildflowers, and gawk at one of the most extravagant private homes ever built. If these sites and many others in the system were located anywhere else, they’d probably be national parks. California, meanwhile, has showstoppers to spare. Here are eight of our favorites. 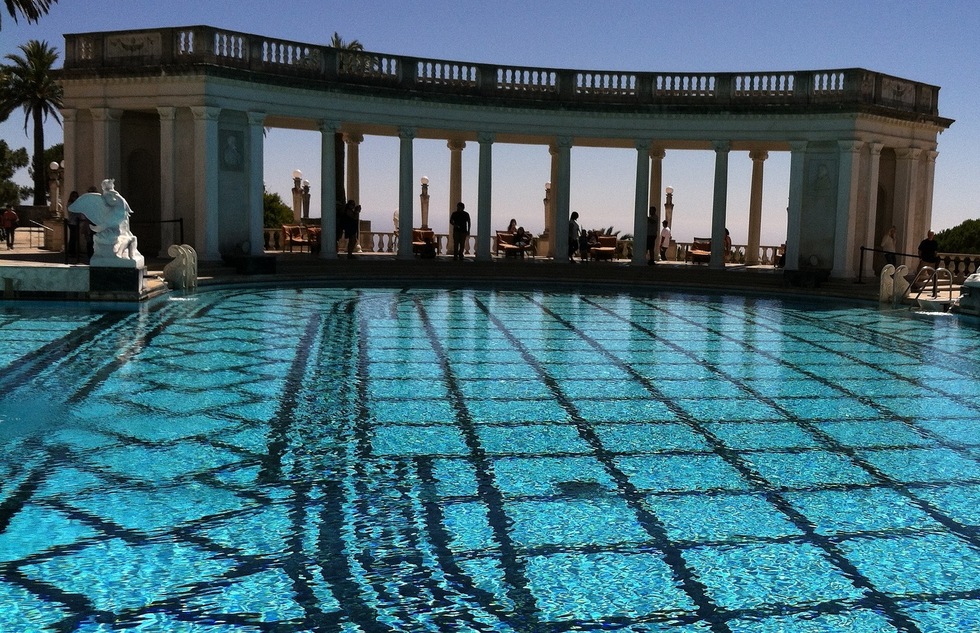 Among manmade landmarks, San Simeon’s Hearst Castle might just be the most American one imaginable—a gargantuan, 115-room mansion, built (in 1919 by architect Julia Morgan) from a jumble of styles inherited from Europe, and owned by an unscrupulous kajillionaire, publishing tycoon William Randolph Hearst, who hosted everybody from Calvin Coolidge to Charlie Chaplin and supposedly forbade them all from even alluding to death while visiting. If that doesn’t sum up a certain strain of the American character, we don’t know what does. Today, you can take one of three hour-long guided tours (make reservations in advance) to see the clifftop estate’s ornate rooms, including the cavernous Assembly Room with the grand fireplace referenced in Orson Welles’s Citizen Kane, as well as guesthouses, greenhouses and gardens, Hearst’s collection of art and antiques, and the famous Neptune Pool (pictured above), surrounded by columned temples and impressive mountain views. 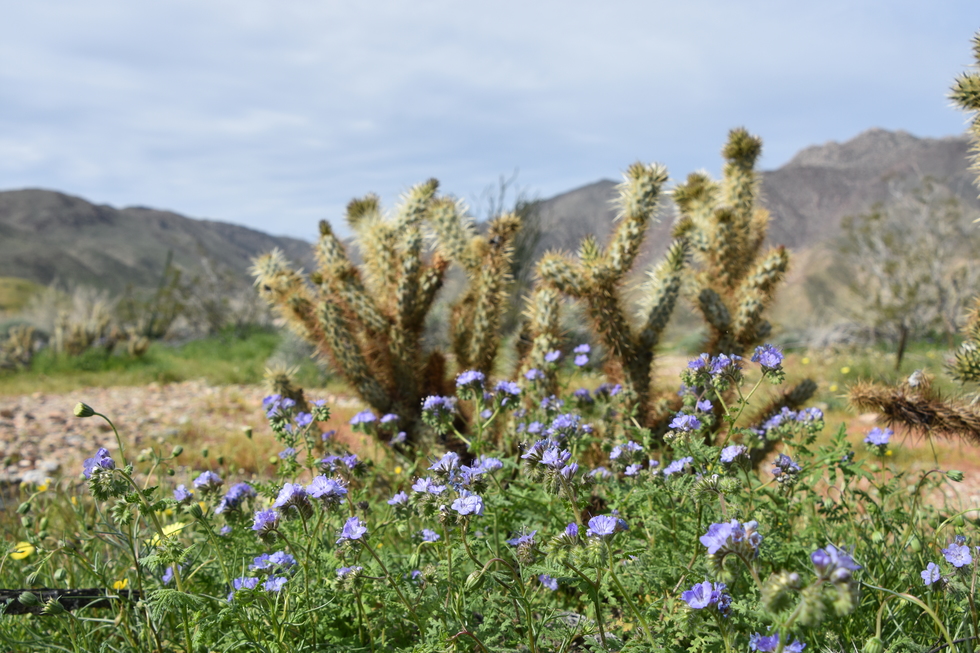 California’s largest state park occupies 600,000 arid acres about 90 miles northeast of San Diego. Despite the desert conditions, thousands of wildflowers carpet the park in shades of purple, yellow, pink, and orange each spring—a surreal phenomenon that happens naturally in just two other deserts in the world (one in Utah, the other in Chile). Visit during other times of the year and you can hike through rocky canyons, discover an oasis shaded by palms, see bighorn sheep (the park takes part of its name, borrego, from the Spanish word for sheep), and, after sunset, enjoy some of California’s choicest stargazing. 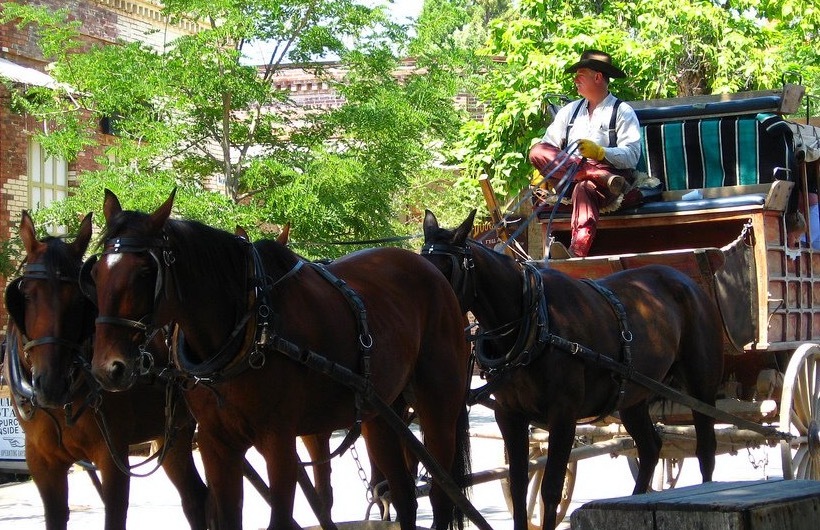 Following the 1850 discovery of gold in the Sierra Nevada foothills, the town of Columbia quickly swelled in population to become California’s second biggest city. There was even talk of making it the state capital, until Sacramento won out. Though the mines in Columbia were eventually exhausted and the number of residents dwindled, the place never quite became a ghost town like, say, Bodie, which has been preserved in a state of eerie stasis a hundred miles or so to the east. Set amid car-free streets in the downtown district’s original 19th-century buildings, Columbia State Historical Park transports visitors to the Gold Rush glory days via stagecoach rides, gold-panning demonstrations, and candle-making lessons, all led by costumed reenactors in period dress. The site is an especially good option if you’re traveling with kids. 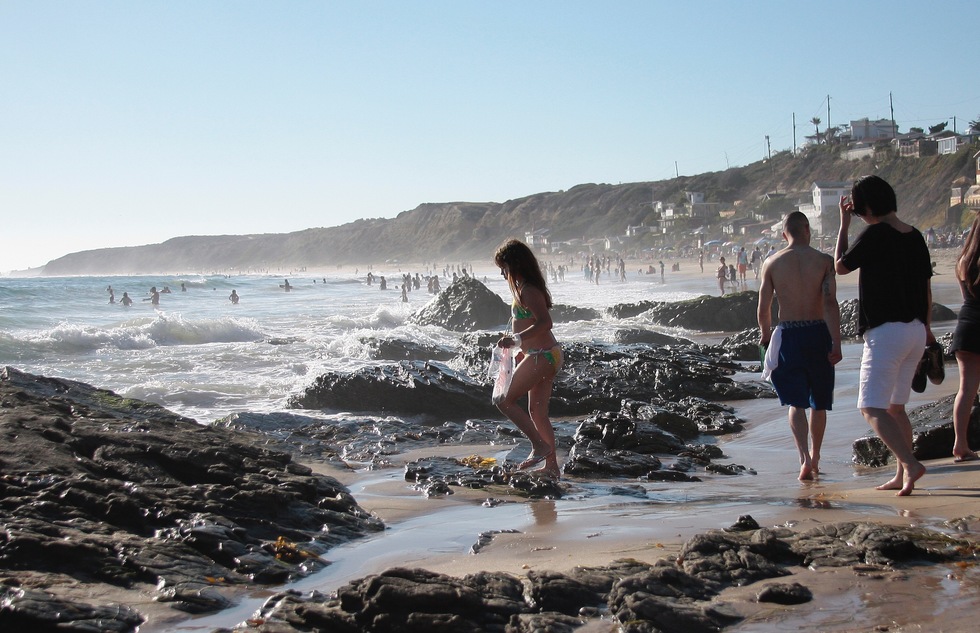 Orange County’s coastal splendor is on full display at Crystal Cove, set off the Pacific Coast Highway between Laguna Beach and Corona del Mar. In addition to having more than 3 miles of beaches popular with surfers, standup paddleboarders, and tide-pool lookie-loos, the park preserves 2,400 acres of backcountry wilderness with trails for hiking and mountain biking through dense forests and across cliffs with ocean vistas. Twenty-one rustic cottages are popular options for affordable overnight accommodations—though you’ll want to book way in advance because demand is high and supply extremely limited. 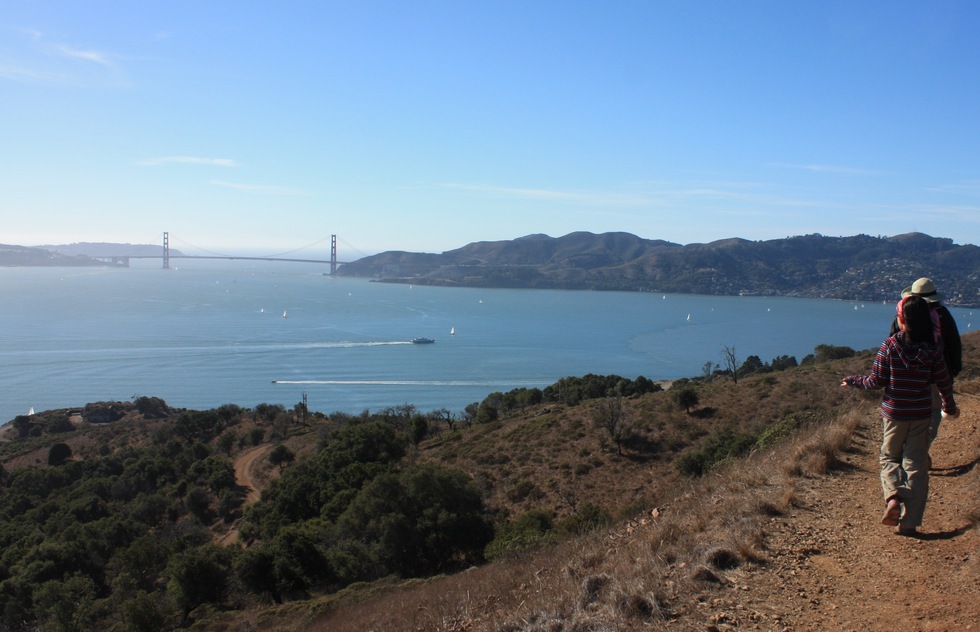 This 1-square-mile island in San Francisco Bay is perennially overshadowed by its moody southern neighbor, Alcatraz. But Angel Island has a history almost as fascinating as that of the former floating prison—and with far fewer tourists and much more natural beauty. A military outpost for about a hundred years starting with the Civil War-era construction of Camp Reynolds (which you can still visit today), the island also served as a major immigration station around the beginning of the 20th century. Hundreds of thousands of immigrants, mostly from Asia, passed through what some have called the “Ellis Island of the West.” During World War II, German and Japanese prisoners of war were held here. Despite all these events, Angel Island still looks remarkably unspoiled on hiking trails showcasing native trees, wildflowers, and some of the bay’s most spectacular panoramas. 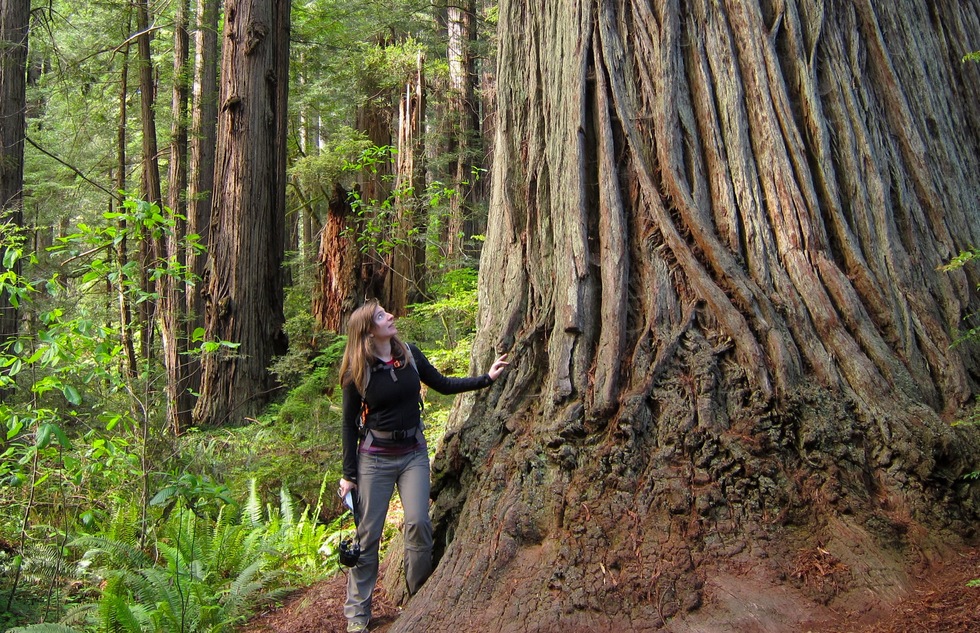 The awe- and ahh-inspiring redwood trees on California’s misty northern coast between Orick and the Oregon border are divvied up among one national park and three state parks: Prairie Creek (pictured above), Del Norte Coast, and Jedediah Smith. Redwood National Park is usually the busiest of the bunch—in fact, to control crowds, rangers limit the number of permits issued to see the famous Tall Trees Grove each day. But the equally worthy state parks offer plenty of chances to hike and even mountain bike (on former logging trails) to the tallest living beings on earth. You’ll also see herds of elk, enormous ferns, and other timeless wonders that might make you temporarily forget about your social media feeds—until, of course, you whip out your phone to document your visit. Bigfoot is said to frequent these parts, too, though we can’t confirm. 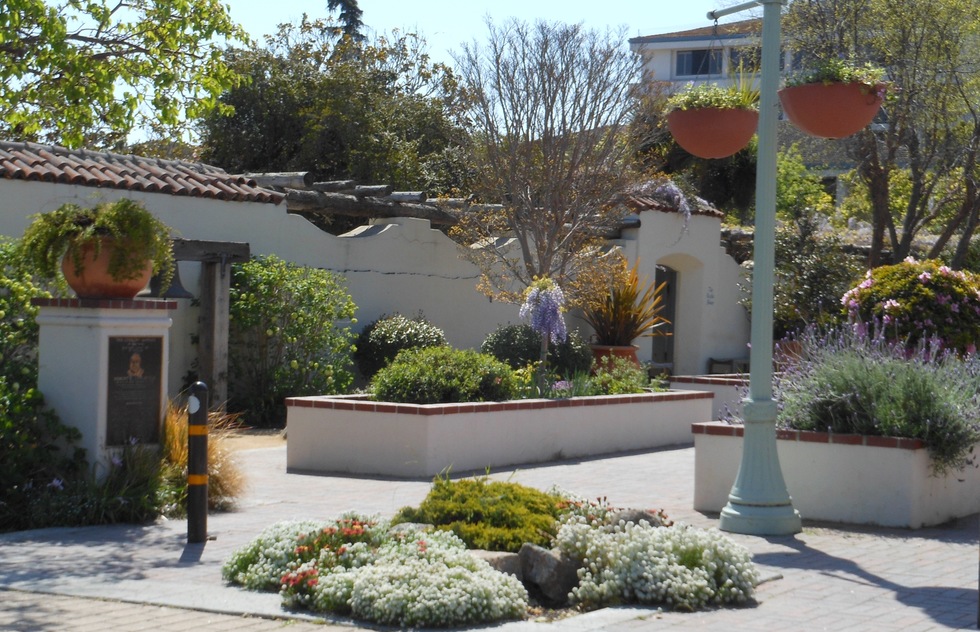 When you think of the most economically and politically significant cities in California, you’re liable to leave out Monterey. But from the 17th to the mid-19th century, it would have topped the list. From the arrival of the Spanish in 1602 through the settlement’s role as the capital of California during its Mexican and U.S. territorial eras, Monterey assembled a pretty remarkable resume. California’s oldest government building (the Customs House) and first theater are here. So are the spot where the U.S. flag was raised in California for the first time and the adobe homes where leaders in the city’s trading and fishing industries lived. The onetime headquarters of the Old Monterey Whaling Company occupies another adobe, next to a sidewalk made of whalebone. Today, dozens of these sites are linked by the city’s Walking Path of History in the oldest part of town. To see the buildings’ carefully restored interiors, you can book tours at the Pacific House Museum, a good spot to acquaint yourself with the city’s storied past. 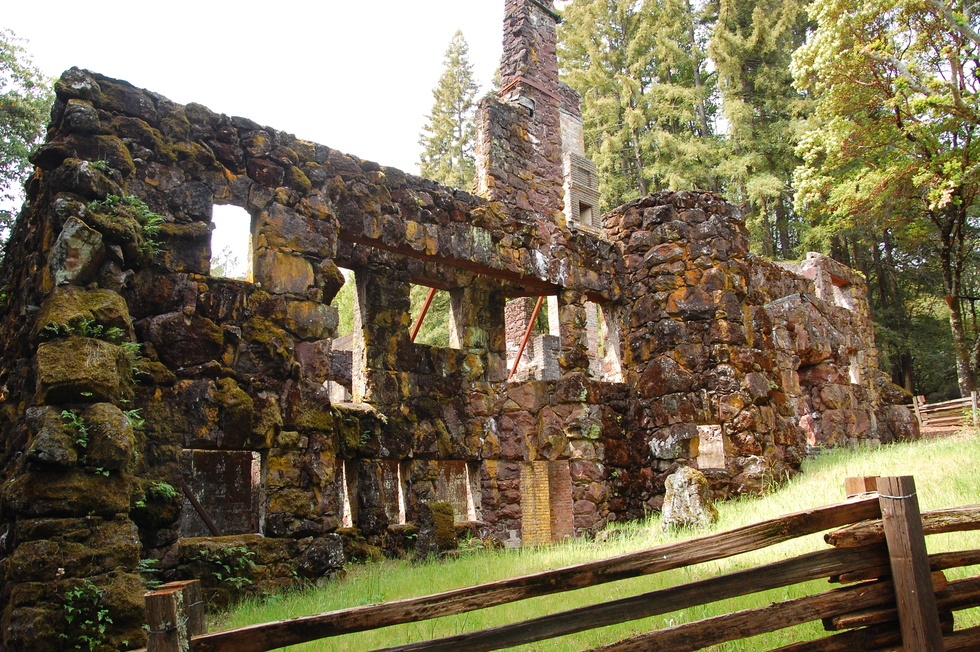 California is basically an adventure novel come to life, so it’s fitting that one of the most popular adventure novelists of all time came from here. Jack London, best known for The Call of the Wild and White Fang, bought his “Beauty Ranch” on the eastern slope of Sonoma Mountain in Glen Ellen in 1905. He planned to build a mansion here but it burned down. Instead, he and his wife, Charmian, used an onsite cottage as living quarters—and, in Jack’s case, dying quarters, too; he passed away on the sunporch in 1916 at just 40 years old (addictions to alcohol and morphine likely contributed). Today, you can visit the cottage, poke among the ruins of the burned mansion (pictured above), and pay your respects at the author’s burial site. Even if you’re not a fan, an orchard, lake, and gently rolling hills make it easy to see why London loved the place.