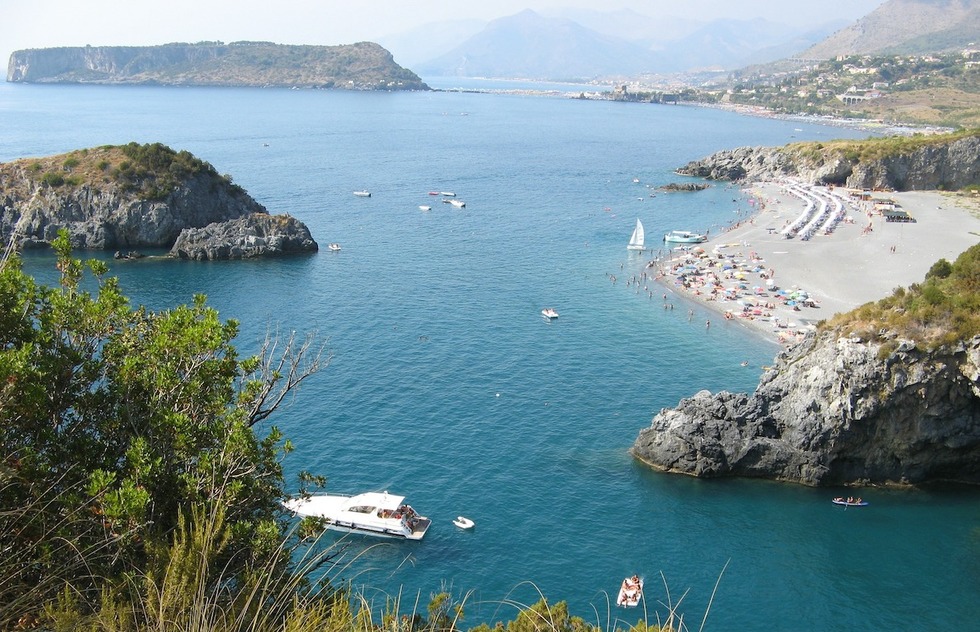 14 Reasons Calabria Needs to Be Your Next Italy Vacation

By
By Michelle Fabio
Calabria, the toe of Italy’s boot, is unfairly one of the country’s lesser-known regions among Americans, but it’s long been popular with Europeans, especially for its stunning 500 miles of coastline. Beyond beaches, this ancient land between two seas—the Ionian and Tyrrhenian—offers additional natural splendors including three national parks with towering mountains, lakes, waterfalls, and gorges, as well as countless rolling hills lined with olive trees.

Once known as Magna Graecia (that's "Great Greece" in Latin) for the Greek settlements on these shores thousands of years ago, Calabria counts among its former rulers the Germans, French, Spanish, Turks, Austrians, and Bourbons, all of whom have influenced the area’s architecture, dialect, customs, and cuisine. So whether you want a relaxing beach holiday, an outdoor adventure, adorable medieval villages, or centuries-old artifacts from many cultures and traditions, there’s something for you in Calabria. 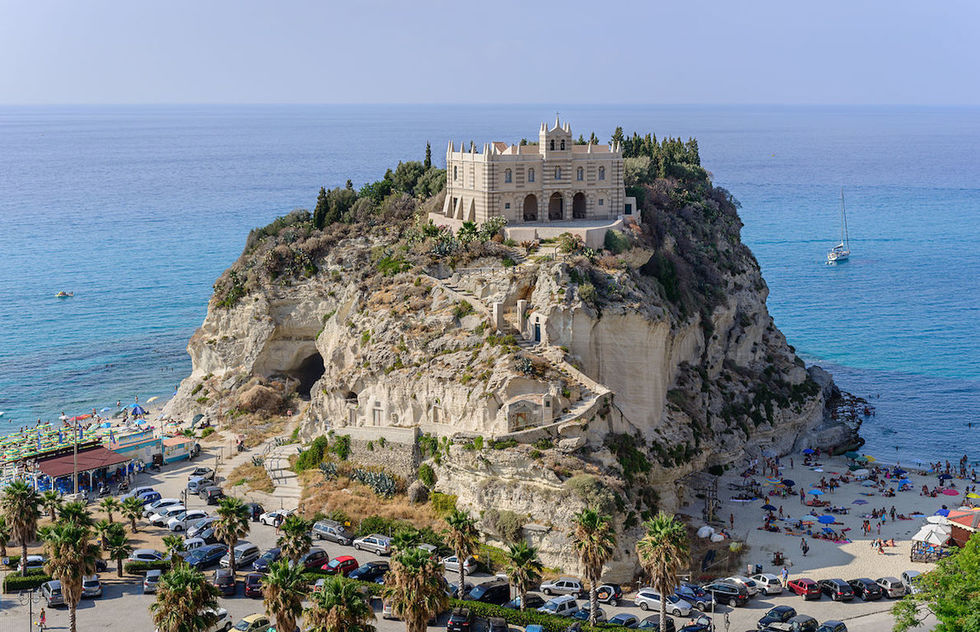 By Norbert Nagel (Own work) [CC BY-SA 3.0], via Wikimedia Commons
Tropea
Tropea, on the Tyrrhenian Sea, is Calabria’s crowning jewel. Dramatic rock formations, clean beaches, and crystalline water reminiscent of tropical islands are the main draws—understandably—but the charming, pedestrian-only historical center, with its restaurants, cafes, and shops, is an added bonus.

And then there are the famous red onions, which you’ll find hanging all over the place and in every restaurant, prepared in various ways, including a sweet marmalade—a true flavor of Calabria. Santa Maria dell’Isola, a Benedictine sanctuary that sits at the top of 300 steps (pictured above), is Tropea’s most famous landmark and well worth the climb for the incredible views across the Strait of Messina to the Aeolian Islands and Stromboli. 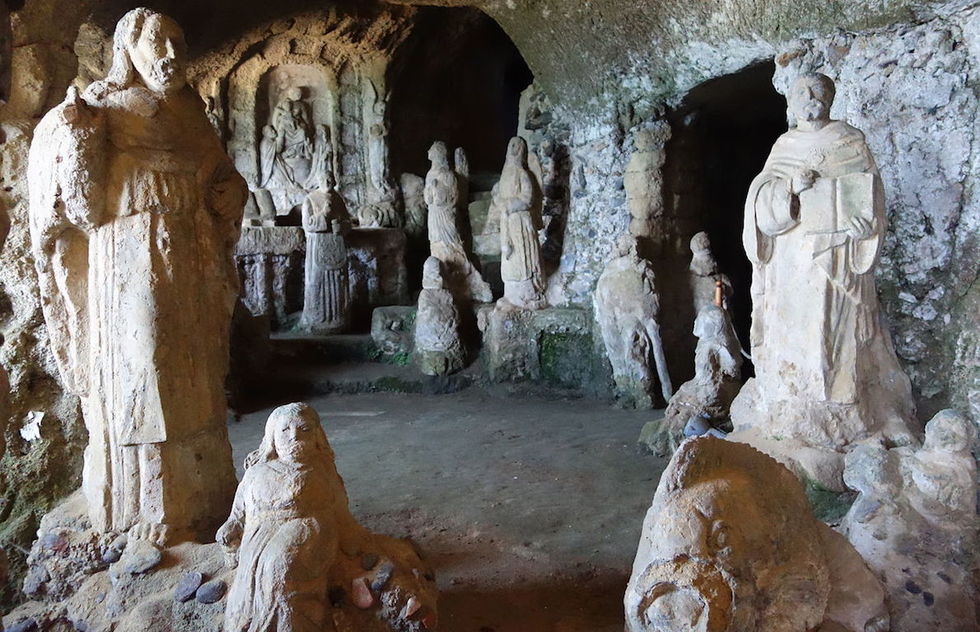 Polpettinablu (CC BY-SA 3.0)
Chiesetta di Piedigrotta
As its name suggests in Italian, Chiesetta di Piedigrotta is a little church in a cave. Located near the beach on the Tyrrhenian in the community of Pizzo Calabro, the church has an interior that was carved entirely from tufa limestone. In the 17th century, a group of Neapolitan sailors prayed to the Virgin Mary during a terrible storm and promised to build her a church if they survived. When they washed up alive on the shores of Pizzo, they followed through. Over the years, other sculptors have expanded upon their work, carving out several altars, biblical scenes, and even depictions of Pope John Paul II and John F. Kennedy.

Pizzo is also famous for tartufo, a ball of hazelnut gelato filled with melted chocolate and dusted in chocolate powder. 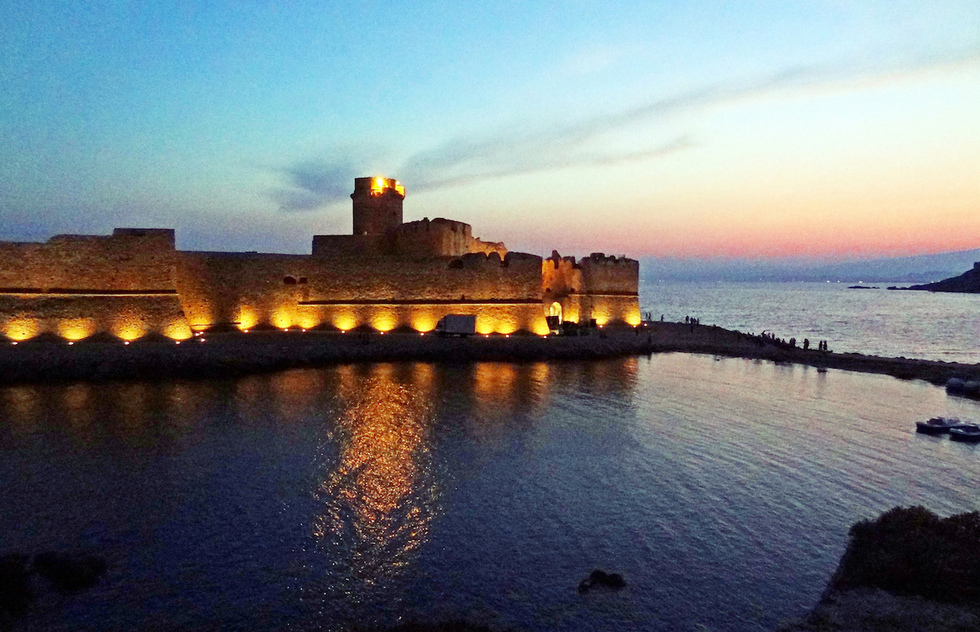 Revol Web/ Flickr
Le Castella
Le Castella is a 15th-century Aragonese fortress that appears to float on its own island in the municipality of Isola di Capo Rizzuto. Visitors can climb to the top of the castle, as they go peeking out the “bocca di lupo” (wolf’s mouth) windows, which were once used for spotting approaching enemies.

Italy’s largest protected marine area, extending from Capo Colonna to Isola di Capo Rizzuto, is a particularly inviting stretch of the Ionian Coast featuring stony coral reefs and lots of marine life, especially seahorses and dolphins. You could spend a few days exploring water-related pursuits such as transparent-bottom boat trips, mini cruises, diving, snorkeling, and simply soaking up some rays on the beaches. 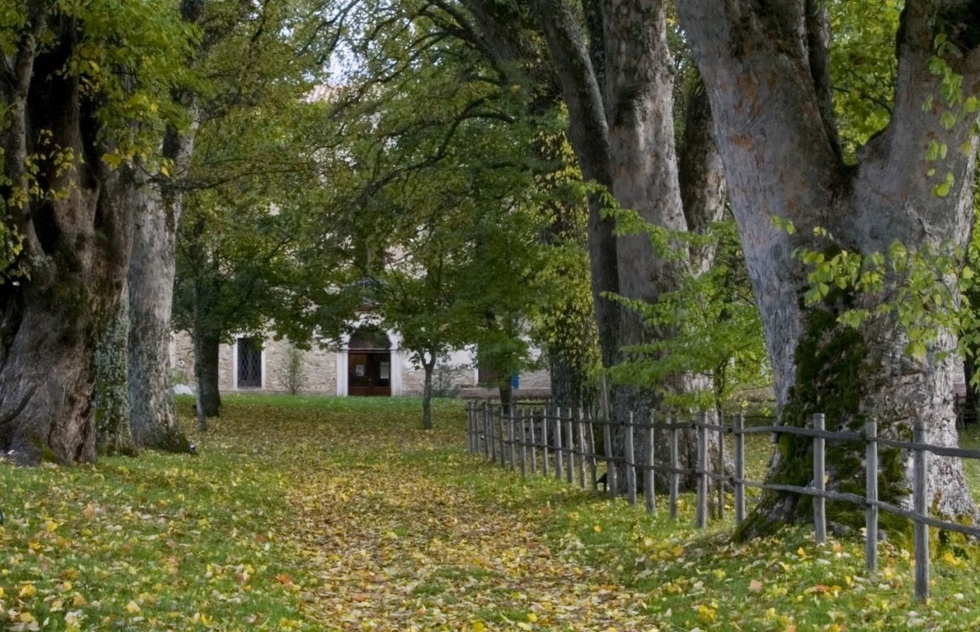 Torre Camigliati
Torre Camigliati
Camigliatello Silano in northern Calabria is a perfect home base for exploring the Sila National Park, including La Nave della Sila, a museum dedicated to Calabrian emigration. Within the confines of this charming but often bustling village is an oasis: Torre Camigliati, a fully restored 18th-century baronial hunting lodge located on a private, wooded, 200-acre estate (pictured above). At Torre Camigliati, you can stay in one of 12 guest rooms on the upper floor of the lodge or in six independent apartments. The spot is immersed in nature and is one of Calabria’s most popular skiing locations.

On the grounds you’ll also find the Parco Old Calabria, named after a 1915 travelogue written by British author Norman Douglas. The green space is classified as a “parco letterario,” or literary park, for its inspirational value to wordsmiths and other artists. 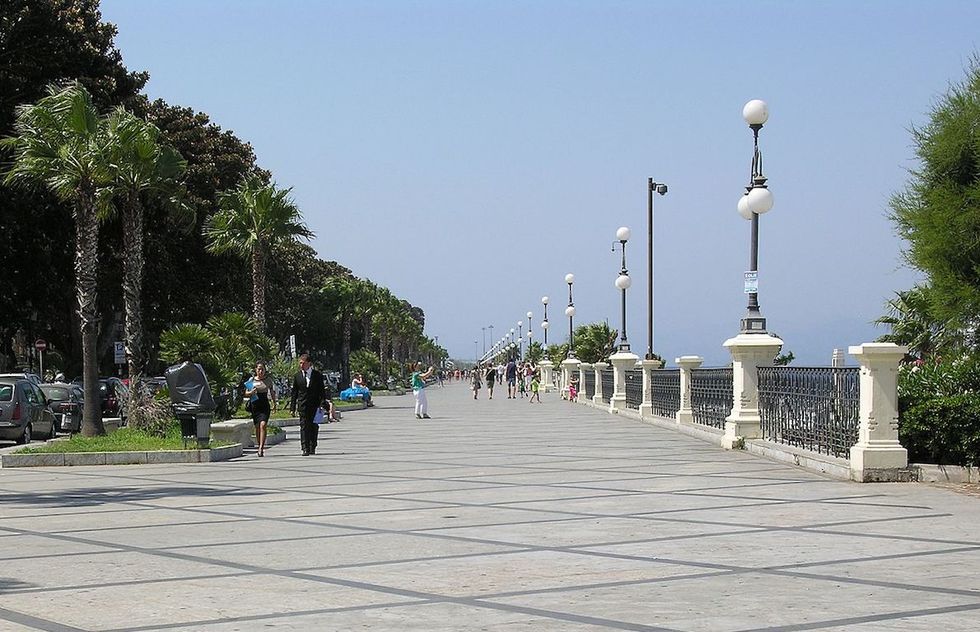 Luca Galli (CC BY 2.0)/Wikimedia Commons
Reggio Calabria
Just a hop over the Strait of Messina from Sicily, Reggio Calabria was rebuilt after a 1908 earthquake, giving it a more modern look than most Italian cities. Its Lungomare Falcomatà promenade (pictured above) may or may not actually have been called “the most beautiful kilometer in Italy” by author Gabriele D’Annunzio, but it’s indisputably gorgeous, lined with palm trees and Art Nouveau palazzi such as Spinelli, Giuffré, and Zani and with views across the water to Mount Etna.

The Arena dello Stretto, an ancient Greek-style theatre, hosts events throughout the summer, and don’t miss the Riace Bronzes in the Museo Nazionale della Magna Graecia. These lifelike, 5th-century Greek warriors were rescued from the Ionian in 1972; photographs do not do justice to their intricate details such as silver teeth and glass and ivory eyes. 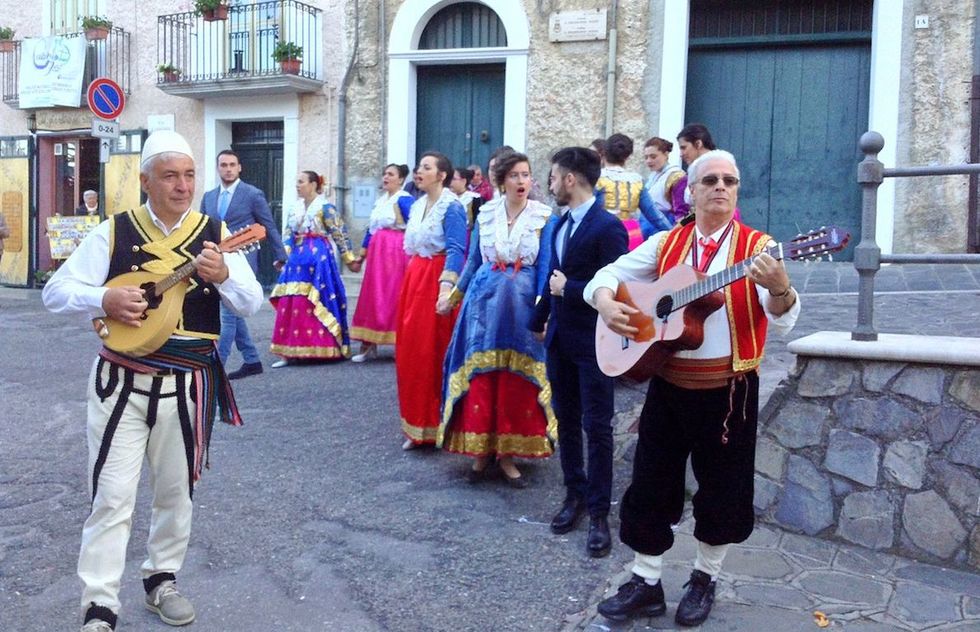 Asia (CC BY-SA 4.0 )/Wikimedia Commons
Civita
Civita is one of Calabria’s Albanian villages, peopled during the 15th to 18th centuries by those fleeing the Balkan invasions of the Ottoman Empire and forced conversions to Islam. The thriving Arbëreshë community keeps traditions alive through festivals, food, song, dance, and an ancient version of Albanian still spoken here.

Civita is also home to the Devil’s Bridge, which connects the two sides of the 7-mile-long canyon formed by the Raganello Gorges (Europe’s deepest) in the Pollino National Park. You can hike to the bridge yourself, hire a driver, or enjoy a panoramic view from a lookout in Civita before sampling some Albanian-inspired cuisine in the town's restaurants. 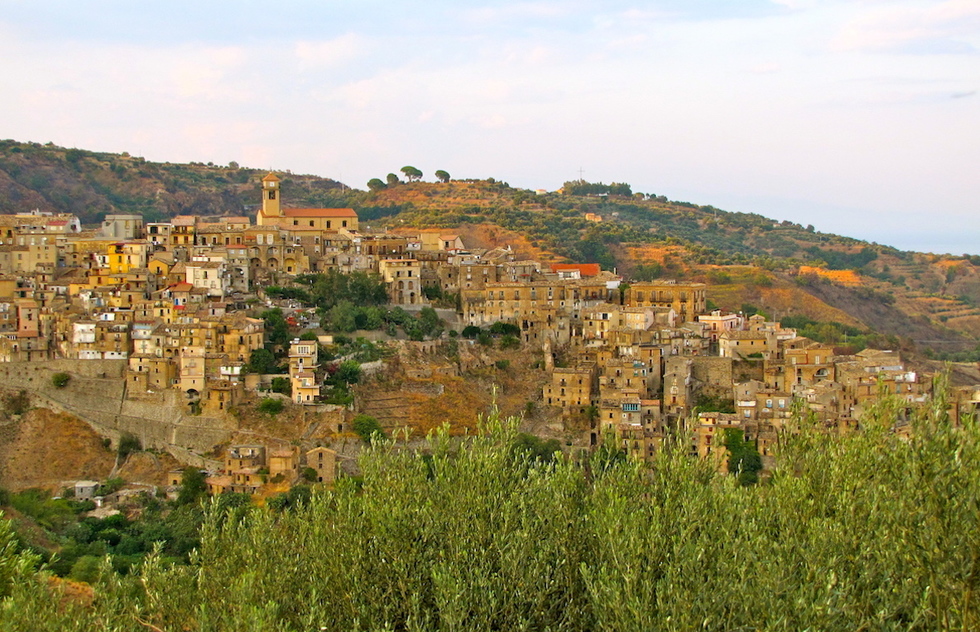 Michelle Fabio
Badolato
Badolato, 800 feet above the Ionian Sea, is one of Calabria’s medieval, walled villages built on hilltops during Norman rule to provide safety from invasion. Most of these towns have counterparts on the sea built after World War II in much less picturesque cement and connected to the old villages by winding, ascending roads. Up on the hills, though, are the sights, sounds, and smells you probably expect from a rural Italian village—chimes of church bells, the aroma of cooking onions, and daily laundry strung about the narrow, cobblestone streets. It's like stepping back in time—but with Wi-Fi.

Badolato was founded in 1080 by the first Duke of Calabria, Robert Guiscard, and is known for its 13 churches. Chiesa dell’Immacolata, set below the village, is especially spectacular when it's lit up at night. 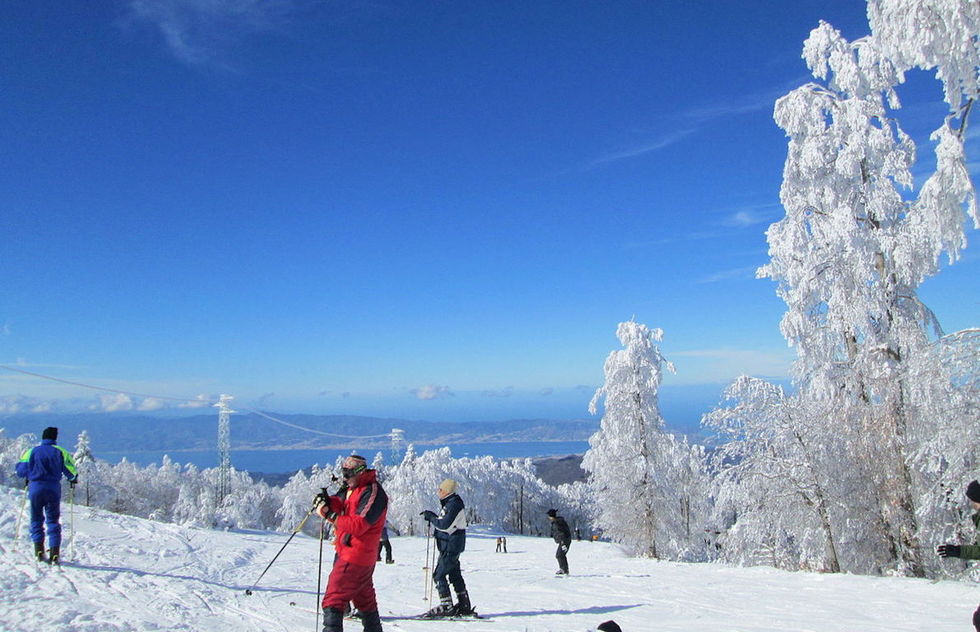 Domecost80 (CC BY-SA 4.0)/Wikimedia Commons
Gambarie
Snuggled into a particularly dense section of the Aspromonte National Park is Gambarie, a hamlet of the village of Santo Stefano d’Aspromonte. Gambarie has come a long way since the 1920s, when hunters and woodsmen began settling here. Since then, the village has evolved into one of the south’s premier sporting locations, especially in winter. Two ski lifts and five runs—three advanced, one intermediate, and one beginner—face the Strait of Messina, Aeolian Islands, and Mount Etna, providing a stunning view from the slopes. You can take advantage of a unique opportunity to go skiing and lie on a beach within an hour. The nearby Amendolea and Maesano waterfalls are additional draws at Aspromonte National Park. 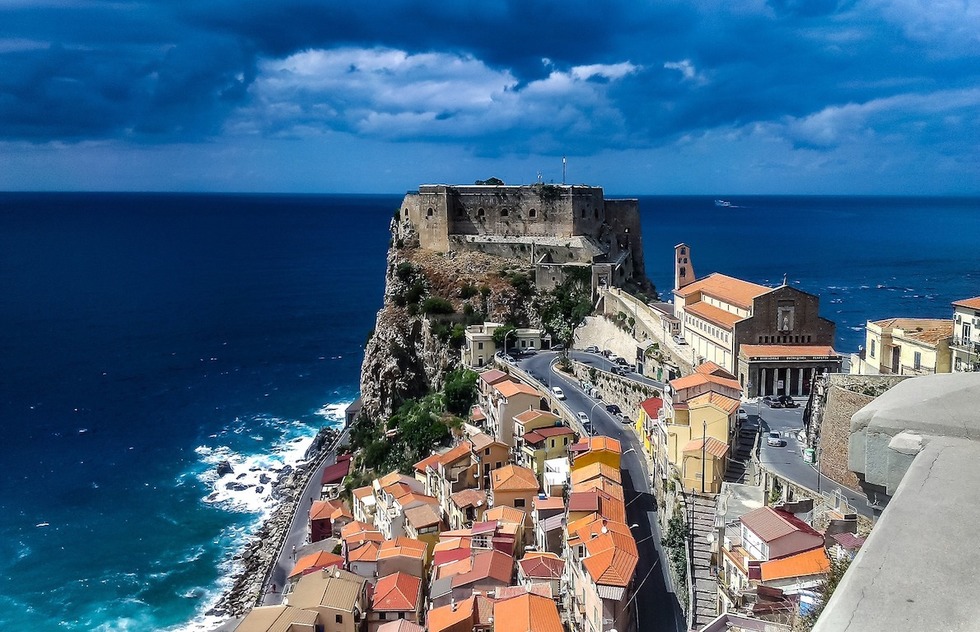 Scilla
Scilla (pronounced “Shiela") is a lovely fishing village on the Tyrrhenian Coast that was once the home of a six-headed sea monster guarding the Strait of Messina—at least, according to Homer’s The Odyssey. Castello Ruffo sits precariously atop the rock that forms the foundation of the town and overlooks one of the finest beaches in all of Italy.

Chianalea, Scilla’s oldest district, is still the home of fishermen who live in pastel-colored houses built into mountain rock. For this aesthetic and architectural wonder, Chianalea is known as “Little Venice.” In Scilla from May to September, you may also catch a glimpse of 2,000-year-old sword-fishing techniques involving the passarelle, specially designed boats that are the world’s only remaining ones devoted to this skill. 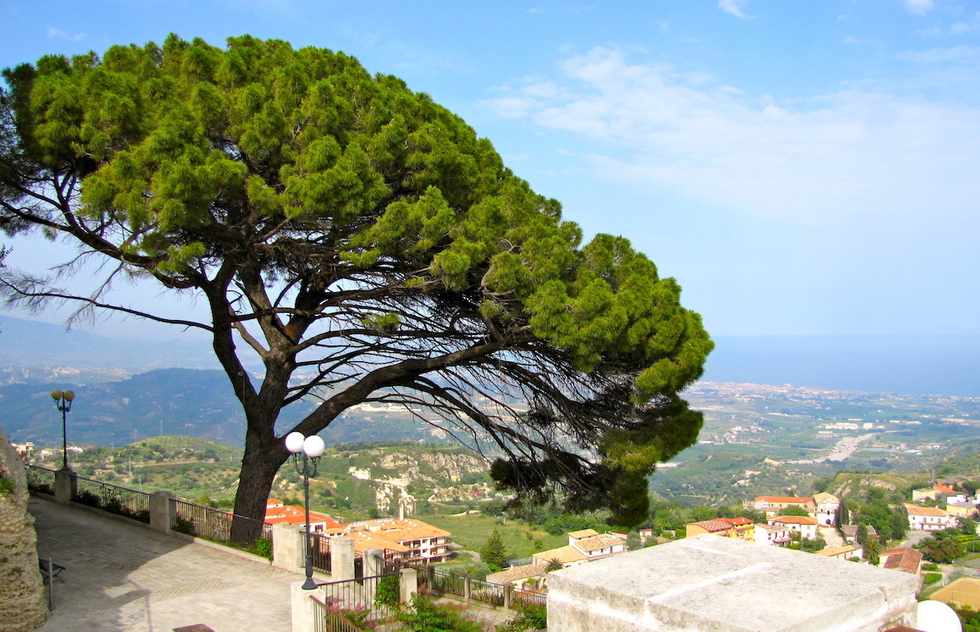 Michelle Fabio
Gerace
Gerace is one of Calabria’s most beautiful villages and also among its most visited. Gerace’s cathedral, Calabria’s largest, isn’t particularly gorgeous from the outside with its fortress-like appearance, but inside it’s a gem from its 18th-century Baroque polychrome marble altar to its aisles lined with columns from Locri’s ancient temples. The Diocesan Museum has impressive holdings, including a 12th-century reliquary cross of emeralds, sapphires, and gilded silver. While in town, peek through the Porta del Sole (Gate of the Sun) for a stunning view of the Ionian Sea past the town’s terra-cotta rooftops. 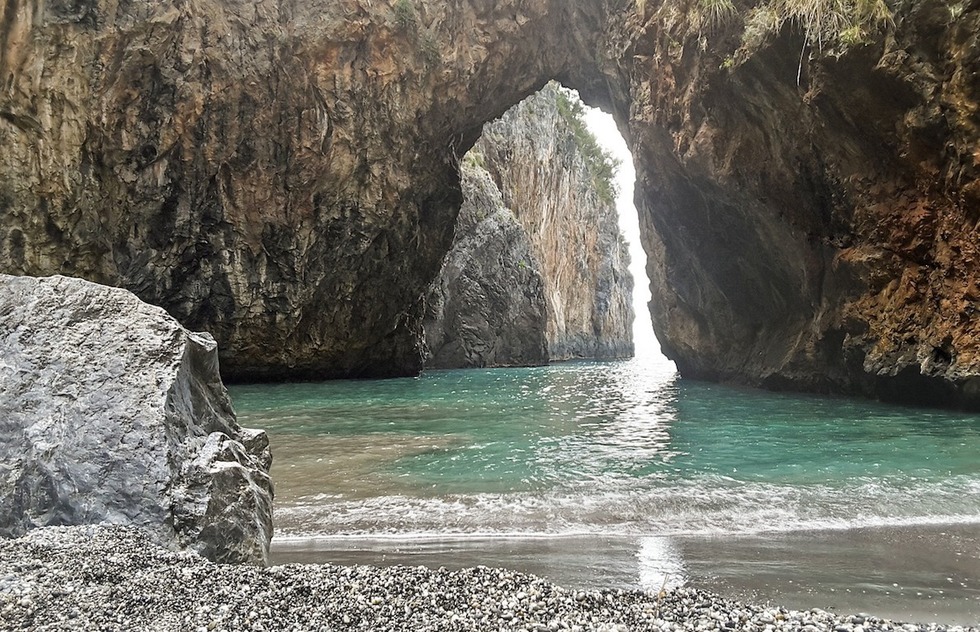 Arcomagno
Calabria’s coastline is full of rocks, cliffs, and coves, and one the most striking of natural formations is Arcomagno (“large arch") in San Nicola Arcella. Though it takes quite a while to reach the arch and its three well-hidden coves, the trek down to the rocky beach and sparkling turquoise sea is worth taking—the cool water is especially refreshing because the sun doesn’t warm the coves throughout much of the day. You can also reach Arcomagno by boat or by swimming. Several mini cruises offer options including visits to caves and to the rugged and enchanting Dino Island near Praia a Mare. 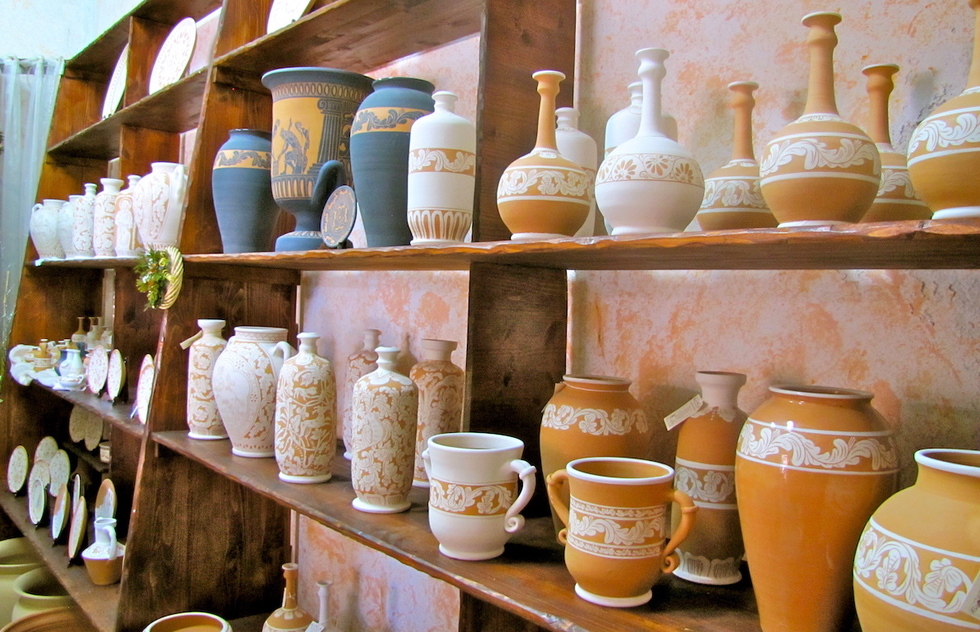 Michelle Fabio
Squillace
Squillace is one of only 33 Italian towns whose pottery has been awarded the D.O.C. (designated origin) label. The sgraffito style, engobed and etched, dates to the 1500s and is still produced by the town’s pignatari, potters named for the pignata, a terra-cotta or clay pot used for cooking beans over an open flame. Artisans' workshops line the streets leading to an imposing 11th-century Norman castle.

The origins of Squillace date to the Greek settlement of Skylletion upon which Romans built Scolacium on the Ionian coast. That area, now known as Roccelletta di Borgia, is an archaeological park undergoing constant digging and exploration. 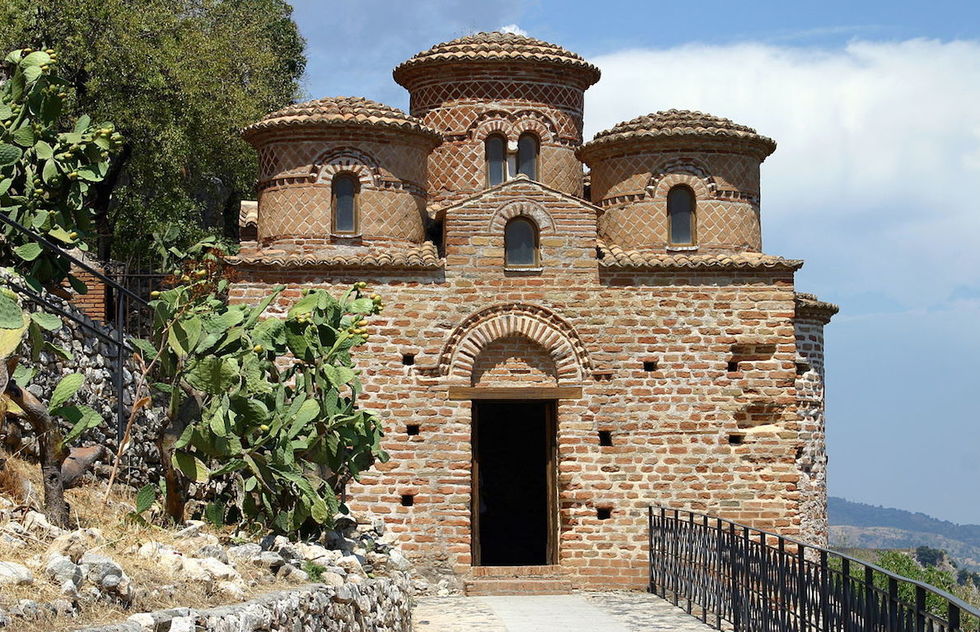 Bonifab (CC BY-SA 3.0)/Wikimedia Commons
La Cattolica
The grandeur of Stilo’s La Cattolica, a 10th-century brick structure topped by five tiled domes, makes it one of Calabria’s most recognizable landmarks. A striking reminder of the region’s former Basilian-Byzantine glory, it's a candidate for UNESCO World Heritage status, along with churches in nearby Roccella Ionica, Santa Severina, and Rossano. Close to Stilo stands the Monastery of San Giovanni Theristis in Bivongi, another noteworthy stop from the medieval era.

Inside, La Cattolica is tiny, though it does feature three apses and a handful of faded frescoes. Trek up the hill for a closer look and for a breathtaking panorama encompassing the surrounding hills and the Ionian Sea. 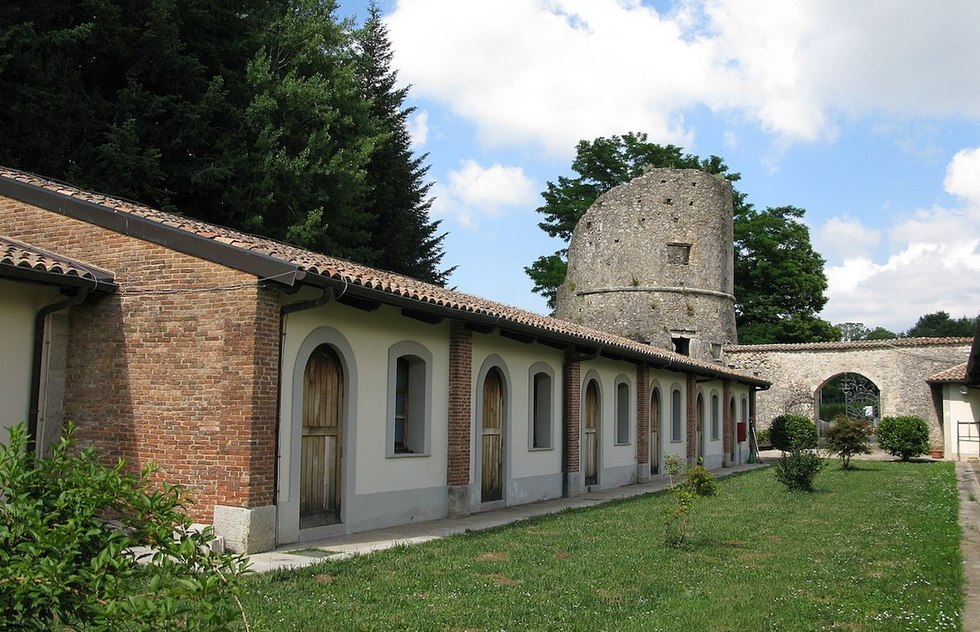 Jacopo Werther (CC BY-SA 4.0)/Wikimedia Commons
Serra San Bruno
In the cool, pine-scented air of the Serre Regional Park, the grounds of the Certosa di Santo Stefano del Bosco in Serra San Bruno is one of Calabria’s most serene and relaxing locations. Founded by St. Bruno of Cologne in 1091, the charterhouse was rebuilt after a 1783 earthquake and still operates as a Capuchin monastery. Visitors are not permitted inside, but Gregorian chants echo throughout the museum. You can enter the small church that St. Bruno dedicated to Santa Maria del Bosco way back in the 11th century, and pay your respects by the grotto where the saint spent the last 10 years of his life. A small pond in which a statue of Bruno kneels in penance is an exceptional spot for reflection, literally and figuratively.