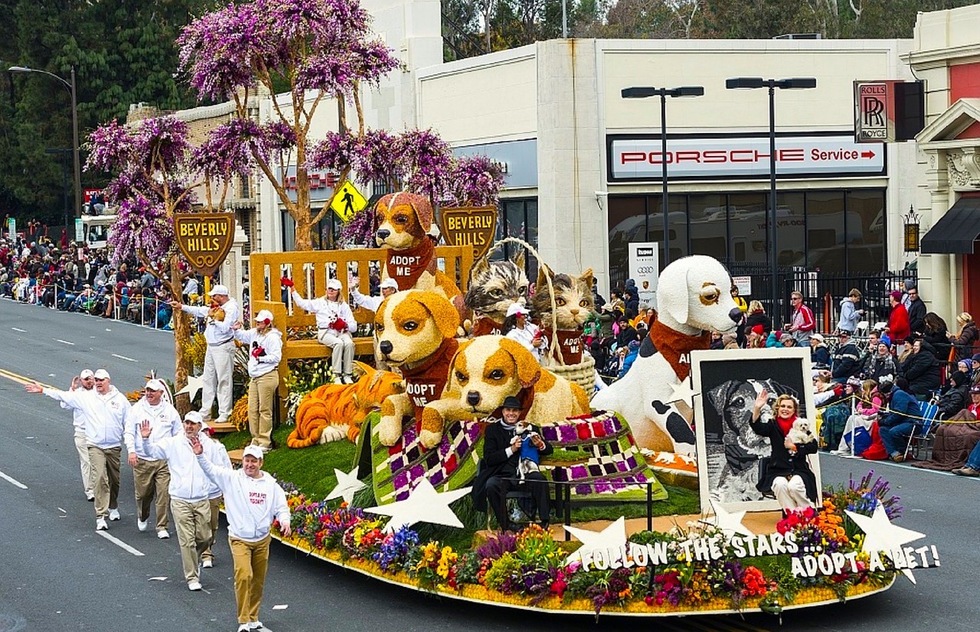 How to Rose Parade: Getting Tickets, Where to Sit, What to Bring to Pasadena

The Rose Parade is to Los Angeles what the Macy's Thanksgiving Day Parade is to New York City: kind of a big deal. Every year on January 1st (or the next day if that falls on a Sunday), dozens of floats, marching bands, and teams of horses parade through the heart of Pasadena to ring in the new year. Inspired by the battle of the flowers at a French carnival in the city of Nice, members of the Valley Hunt Club started the pageant in 1890 to advertise Pasadena to their friends back east and lure them westward with the promise of a Mediterranean climate and abundant citrus groves.

The early years of the Tournament of Roses featured now-defunct sporting events like chariot and ostrich races. Football, in the form of the Rose Bowl, wasn’t added until 1902 and has only been a regular event since 1916. But the parade has been a constant and it remains an impressive spectacle worth traveling far and wide to see. Here are 10 pro tips on how to get to the Rose Parade and how to navigate the area during its busiest season. 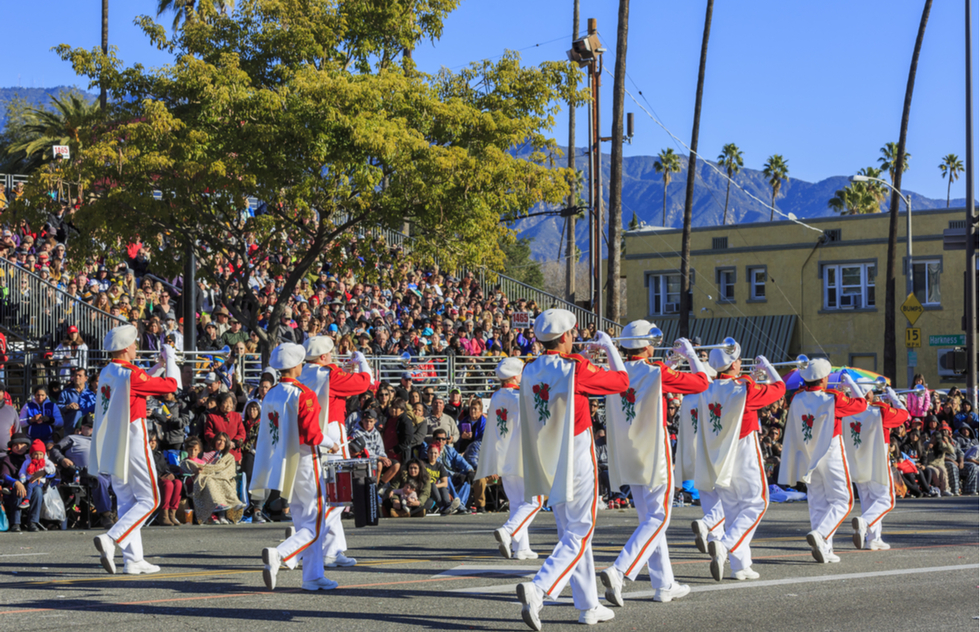 Make no mistake: Planning for each year’s Rose Parade starts early. If you want seats, tickets go on sale around February 1st for the parade that kicks off 11 months later, on January 1. Sharp Seating is the official provider of grandstand seating—that is, the bleachers at the beginning of the parade route on Orange Grove Boulevard (a.k.a. Pasadena’s “Millionaire’s Row”) and along Colorado Boulevard. Those stadium-style, reserved seats will run you as much as $110 apiece (not including parking)—and although there are 70,000 of them available every year, they routinely sell out in advance. For much of the rest of the 5.5-mile route, anyone can stake out a piece of curb for free.

For those traveling to the area, Rose Parade and Bowl ticket and hotel packages are available through Primesport, a purveyor of similar combo deals for the Super Bowl, Kentucky Derby, and other monumental sporting events. Rose Bowl football game tickets, sold separately from the Parade, are also available at Ticketmaster outlets. The game is one of the few Tournament of Roses events that you can plan at the last minute, since tickets for that don’t go on sale until early December. 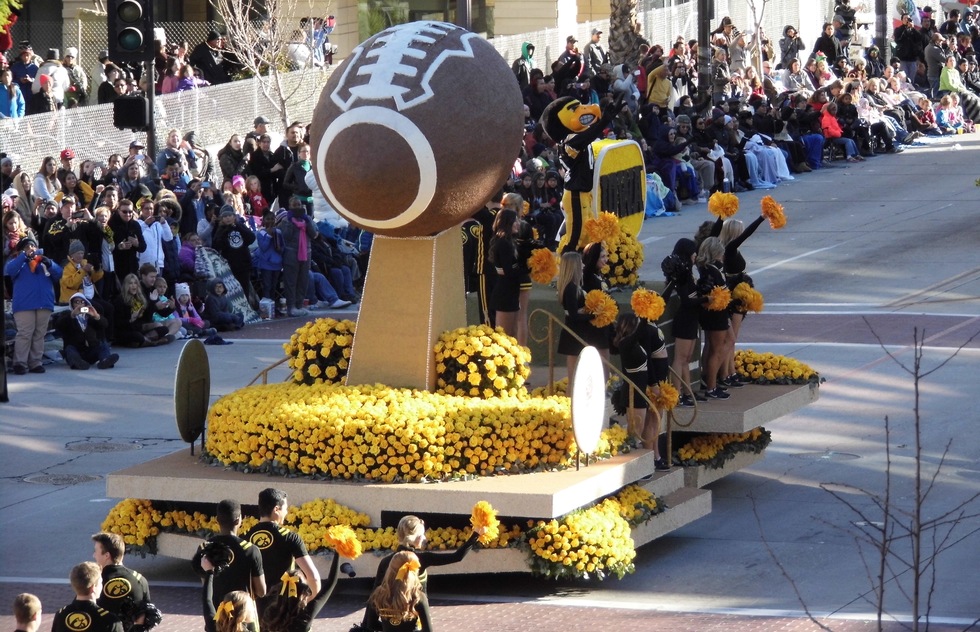 Sandi Hemmerlein
When to arrive

The floats travel at a mere 2.5 miles per hour and the parade lasts about two hours. If you're waiting at the end of the route, you'll wait about two hours after the start time to see the first floats. So you’ve got some flexibility with your arrival time depending on the location of your viewing spot—unless you’ve bought one of those grandstand seats at the beginning. The parade kicks off at 8am, but reserved seating ticketholders are recommended to get into position no later than 7am. If you’re planning on getting up that early, you might as well stop by the First United Methodist Church Pasadena (at the corner of Colorado Boulevard and Oakland Avenue) for its traditional pancake breakfast, which runs from 5:30 to 8am.

Some intrepid souls brave the chilly temperatures to camp out overnight to secure a good spot along the curb—but if you want to catch a few more winks, you can arrive as late as 9 or 9:30am as long as you choose a spot after the parade route turns from Colorado Boulevard onto Sierra Madre Boulevard. 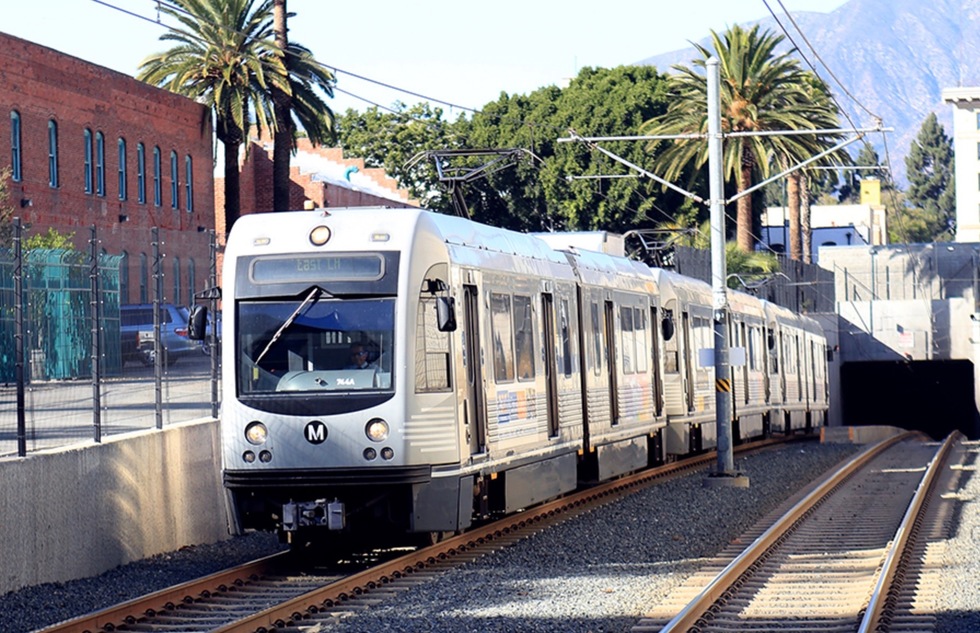 Visit Pasadena
Getting there

Pasadena is about 10 miles north of downtown Los Angeles. Taking a rideshare car service to the parade is a viable option, as there’s plenty of opportunity to get dropped off a few blocks away. But after the parade is over, you’ve got to deal with finding a ride back (and surge pricing). That means the most hassle-free way of getting to the Rose Bowl on New Year’s Day is actually public transportation—more specifically, L.A. Metro’s Gold Line light rail service. Three stations (Memorial Park, Lake Avenue, and Allen Street) are within walking distance of good viewing spots. 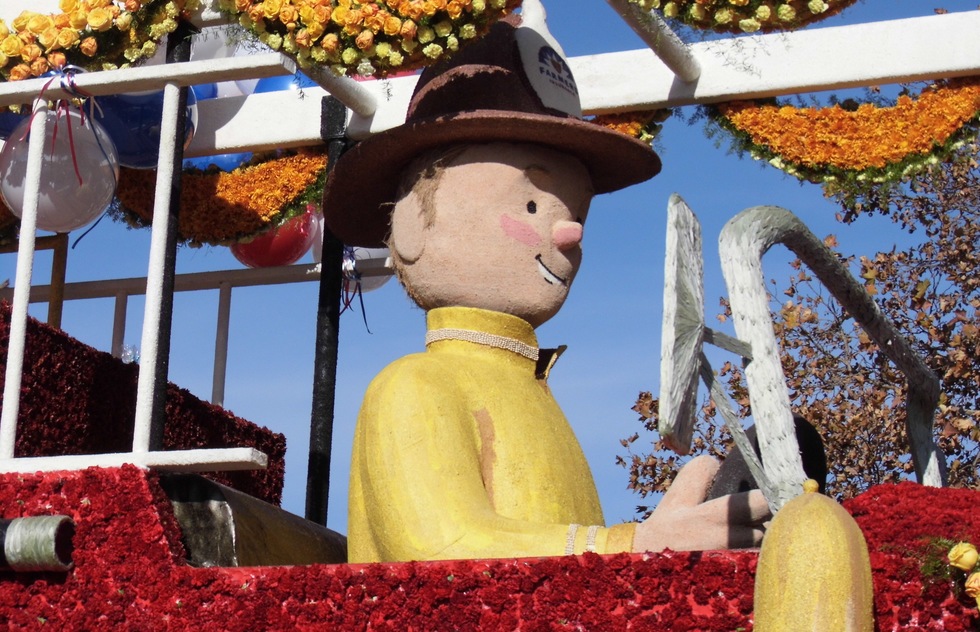 Sandi Hemmerlein
Where to park (if you must)

If money is no object, Sharp Seating sells reserved parking spots. For a little more, campers can pay to park overnight. But all reserved parking options are “stacked” with no space between vehicles—which means you’ll probably have to wait for other people to leave before you can get out. If you choose to wing it without reservations, you may pay a little less; some entrepreneurial business owners and homeowners will let you park in their lots and driveways for a fee. The later in the morning you arrive, the more the price will drop.

Street parking may be available several blocks from the route, and regulations may be relaxed since New Year’s Day is a holiday. But you might not be able to find a spot. If you’re not staying near a Metro station, your best bet is to drive to one that has parking facilities (Union Station in downtown Los Angeles has some) and take the Gold Line from there. 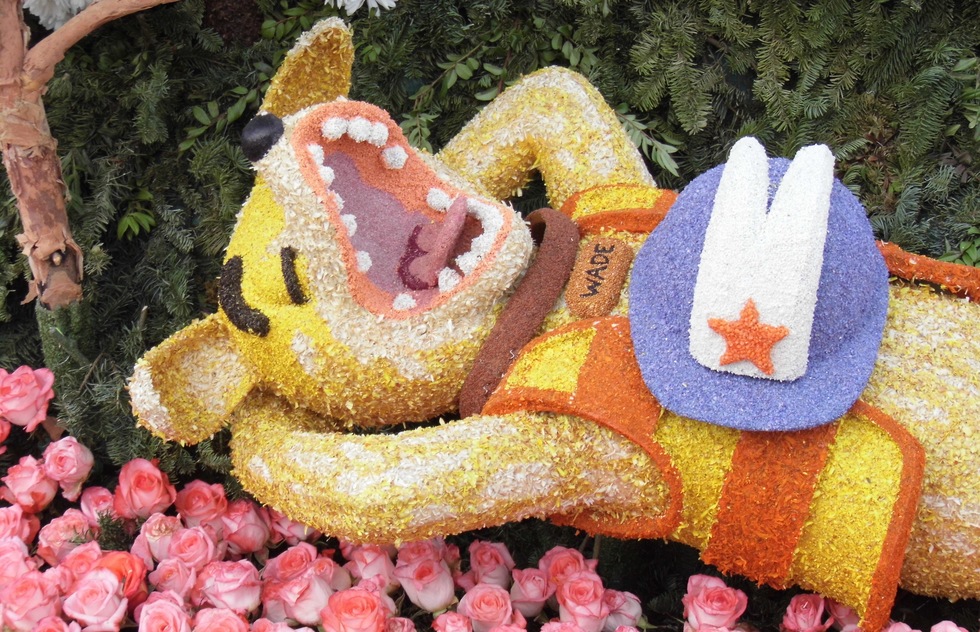 If you’re staking out a viewing spot starting the night before the parade, pack as you would for a camping trip. You’ll need protection from the elements because temperatures can dip into the 30s in Pasadena during the winter. The daytime can be warm and sunny, so it’s best to bring layers you can remove if you get hot. Wear sun protection and carry plenty of water. It’s unlikely that you’ll need rain gear, but it doesn’t hurt to be prepared.

You’re allowed to bring food, coolers, and even low folding chairs, but note that open containers of alcohol are not allowed, nor are ladders for a better view. And if you’re driving yourself, bring cash—preferably $10 bills—for parking, in case you have to pay for your spot. 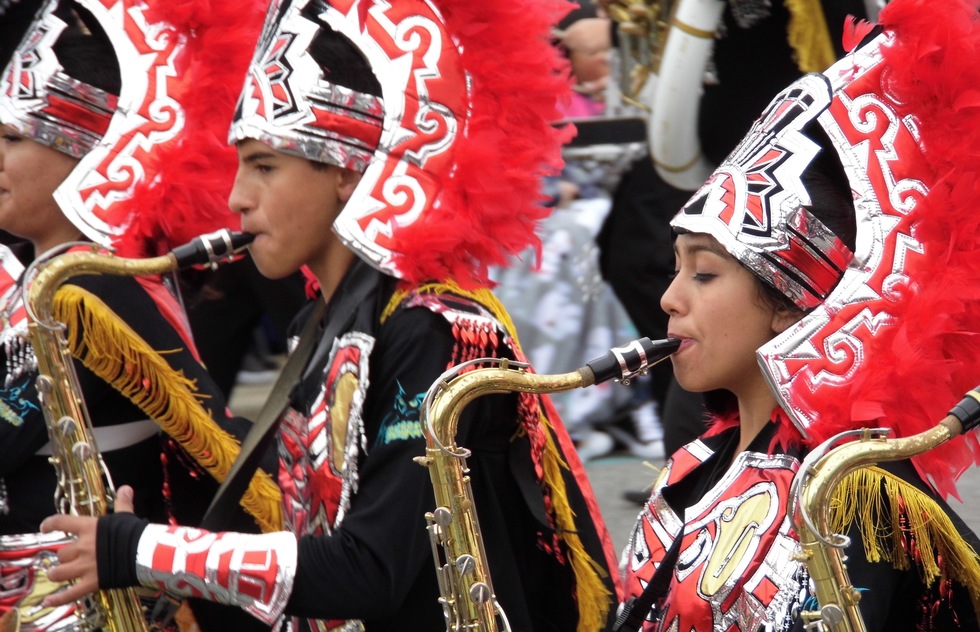 Sandi Hemmerlein
How to choose a viewing spot

Along the main commercial strip in the Paseo Colorado area, the taller buildings cast shadows on the street. Spectators on the northern side of Colorado will be facing the sun, and sunglasses are a must for that bright morning light. You may be more comfortable sitting in the shade, but also remember you’ll get a more colorful view in a spot with better lighting—which improves on the eastern end of the route where tall buildings are more sparse.

One of the challenges of watching the parade from a long, straight stretch is that you only get to see one side of everything. For a more complete view, look for one of the intersections where the parade turns: from Orange Grove onto Colorado, from Colorado onto Sierra Madre, or where Sierra Madre curves as it heads northeast. Another insider trick is bypassing both the grandstand seating and the curb and getting a spot at a local business that’s throwing a viewing party. For a fee (which varies), you can get a guaranteed spot indoors, plus refreshments. This plan takes research and some phone calls, though, since the participating businesses change each year. 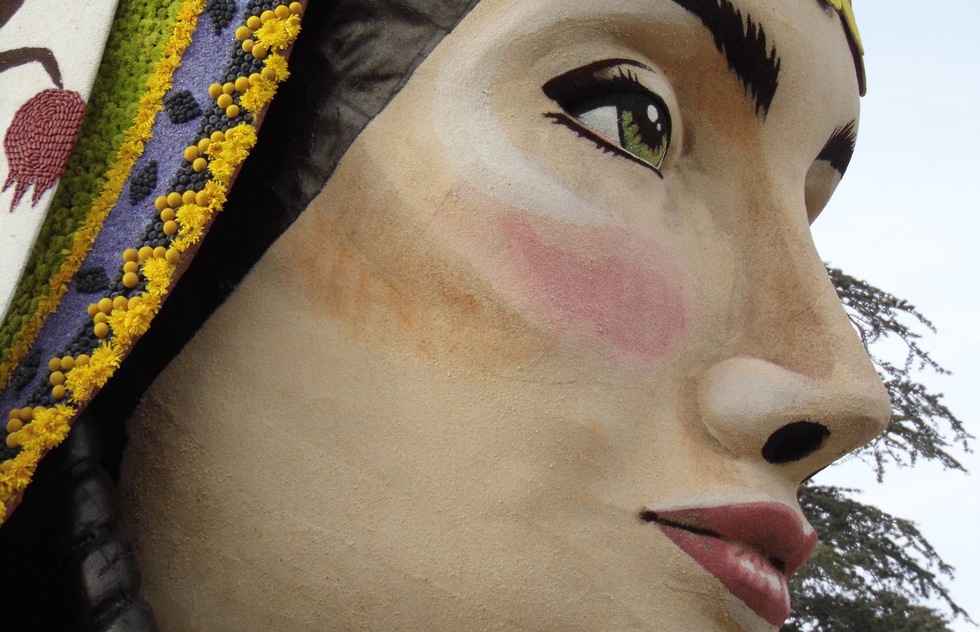 Sandi Hemmerlein
What to look for

The Tournament of Roses chooses a different theme for the parade every year, which is enough reason to make visiting an annual tradition. As per the rules of the parade, pretty much every inch of every float must be decorated by a natural material, from the famous roses and other flowers to cinnamon, berries, citrus fruit, and other edible delights. (Look closely; the face pictured above includes oatmeal and beans.) While some creations swim, surf, and even fly, most are about local pride, whether it’s for Southern California wildlife, the military, firefighters and other first responders, sports, or architecture.

In addition to the floats—many of which incorporate smoke and animatronics—expect classic cars, including ones ridden by celebrities like the year's grand marshal. But the Rose Parade isn't just a visual experience. You also smell it as the blossom-covered floats drift past. And you hear it, too, from the clip-clopping of the horse teams to the musical ensembles that fly in from all over for the honor of performing along this famed route. 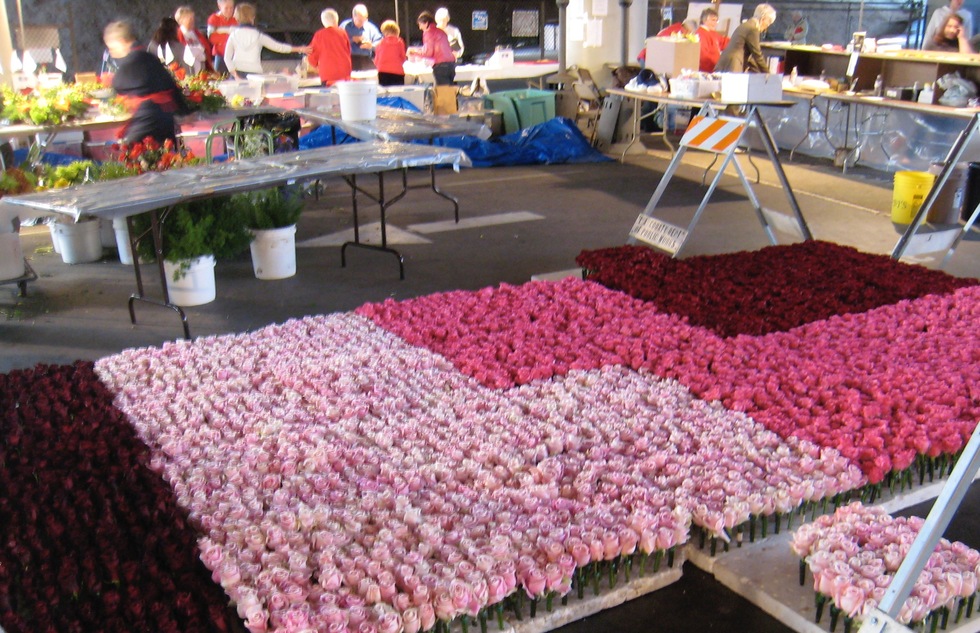 John Lambert Pearson / Flickr
Be more than a spectator

If you want to get in on the action, roll up your sleeves and get your hands a little flowery with one of the professional float-decorating companies, such as Fiesta Parade Floats or Phoenix Decorating Company. You can also chip in with one of the cities or groups that builds its own entries. You don’t have to be a local to help; cities like Burbank, La Canada Flintridge, South Pasadena, Downey, and Sierra Madre all welcome outsiders to help create their floats. Some people fly in from all over the country to decorate for the parade as an annual family tradition. The busiest time is “Deco Week,” the days following Christmas and before the parade, when the float structures have pretty much been built but still need to be festooned with flowers. 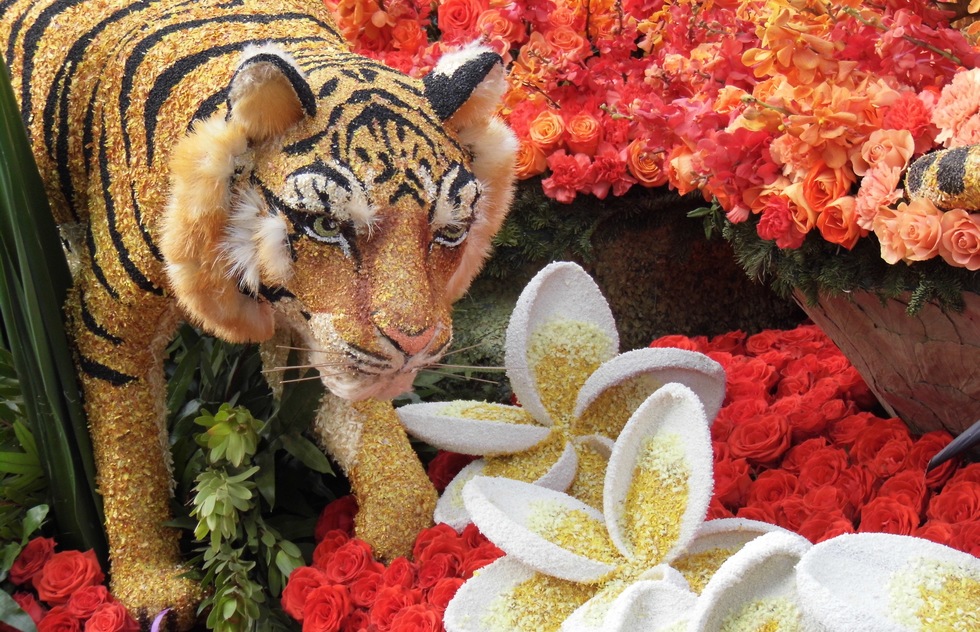 Sandi Hemmerlein
Chances to get up close

If you miss the parade and Deco Week—or if you were seated too far away to see the glittering fine details—you’ve got one last chance at the Post-Parade Showcase. After the parade finishes, the floats park at the end of the route at Sierra Madre Boulevard and East Washington Boulevard (by Pasadena High School) and are available for viewing for a couple of days, rain or shine, for around $20. Here’s where you can stand within feet of the floats and, in some cases, witness their animated features up close. Sometimes the flowers still have their scent.

The display requires a couple of miles of walking if you do the whole thing, so wear comfortable shoes. Lines can get pretty long, especially right after the parade. To expedite entry, purchase a ticket in advance through Sharp Seating. 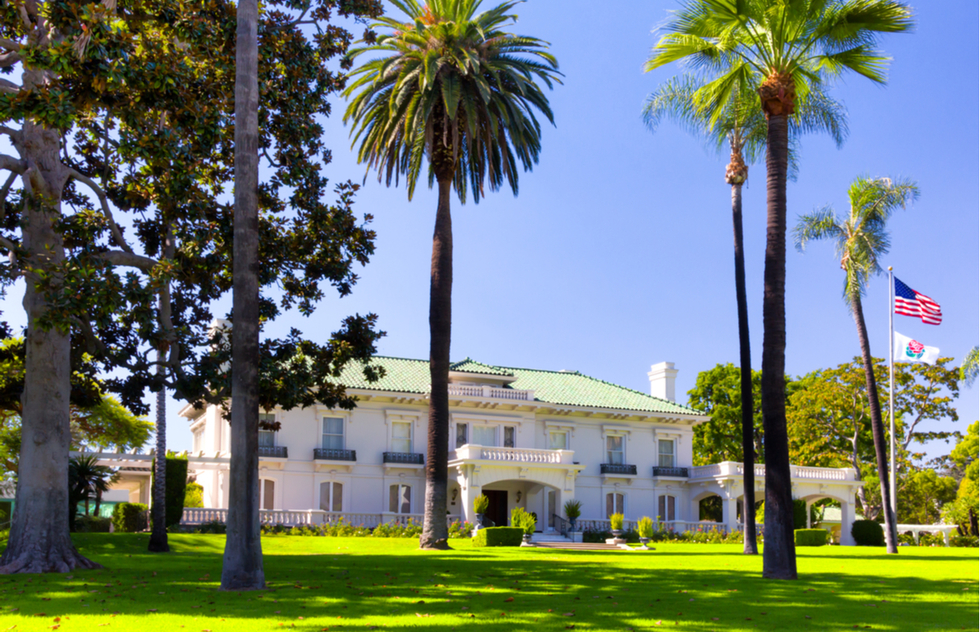 Ken Wolter / Shutterstock
While you're in Pasadena

The Tournament of Roses headquarters (391 S. Orange Grove Blvd.) occupies what was once the mansion of chewing gum magnate William Wrigley, Jr. The building now known as Tournament House was one of the more modest mansions built along Pasadena's Millionaire's Row, but most of the others have been torn down. The interior and its free museum are only open to visitors from February through August. The rest of the year, the place is used for planning the Rose Parade and Bowl. But you can always visit the rose garden, which is maintained year-round by the Pacific Rose Society.

The week before New Year's, Band Fest performances showcase the marching bands that will be featured in the parade. Outside of Rose Parade season, public tours of the Rose Bowl Stadium acquaint visitors with an iconic spot where, in addition to the annual college football game, five Super Bowls, the Olympics, and Major League Soccer matches have been held. Tours generally take place on the last Friday of the month. Tickets are available directly from the Rose Bowl.