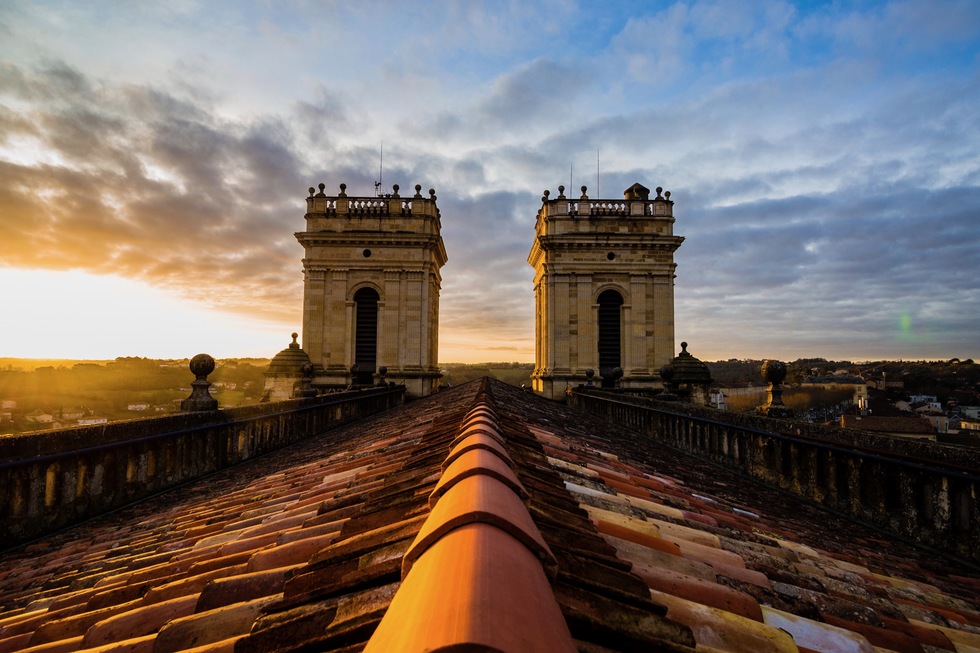 Auch: Foie Gras and Brandy in the Corner of France the French Love

When the French feel nostalgia for the France of a bygone era, they dream of Gascony. This is a bucolic Southwest region bordering Spain, with silky green rolling hills, country chateaus, generations-old farms, and endless supply of foie gras and Armagnac. The ancient city of Auch, the historic capital, is a hilly architectural gem straddling the Gers river and a popular stop on the Camino de Santiago pilgrimage. Home to fewer than 23,000 Auscitains, Auch is at once laid-back and lively. Most shops close on Sundays and Mondays (as well as for the mandatory 2-hour lunch break), but at other hours, the city bursts with life at its cafés, patisseries, and markets. You’ll learn to love Auch like the French do, too. 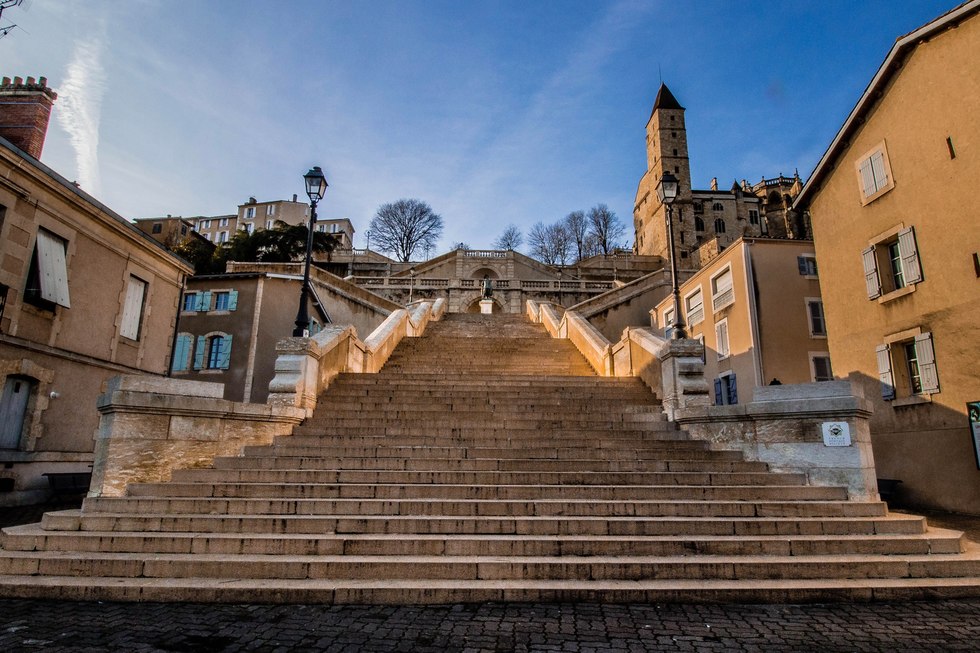 Yandal Touala
The Monumental Staircase and statue of D’Artagnan

Auch (rough pronunciation: “owsh”) is divided into two parts by the Gers river: basse ville (the lower, modern part of the city) and haute ville (the old quarter on the hill). The best way to go from one to the another is the stately Escalier Monumental (literally, “Monumental Staircase”), completed in 1863 with 234 steps. Charles de Batz, the man who inspired D’Artagnan, the swashbuckling protagonist of The Three Musketeers, was from the area, and a 1931 statue of the character by Firmin Michelet stands proudly at the lower landing, sporting his iconic plumed hat and spurred boots, sword at the ready. The staircase offers breathtaking panoramic views of town and the great Pyrénées mountain range to the South, as well as the 40-meter (131-foot) high Tour d'Armagnac (now a museum, it was originally built to be a prison in the 14th century) and and the Cathédrale Sainte-Marie above. 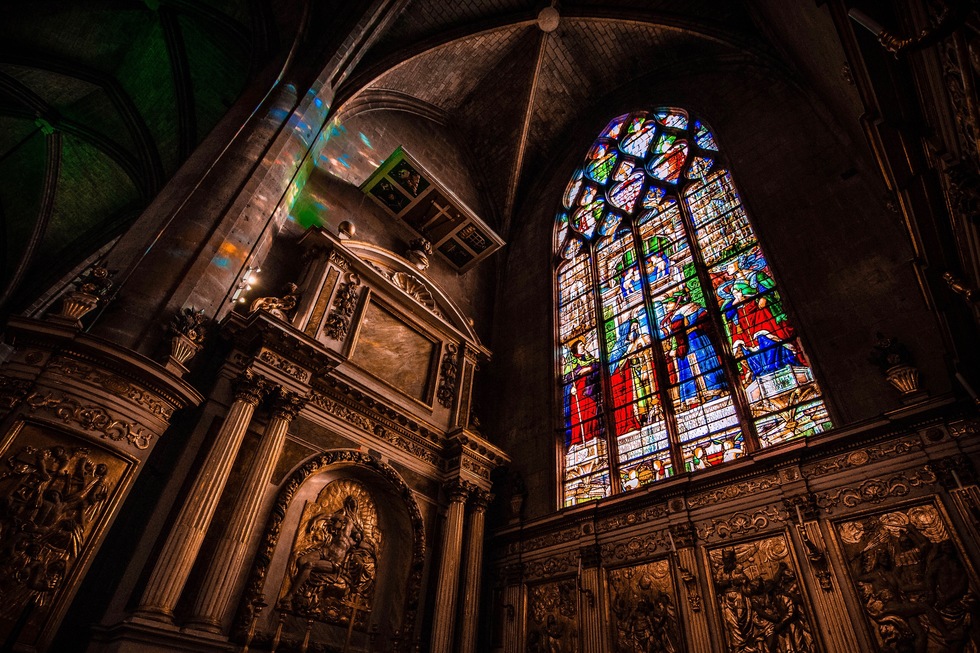 The Cathédrale Sainte-Marie, a UNESCO World Heritage Site, is one of Gascony’s crowned jewels. The grand dame sits atop the hill in the historic quarter of Auch like a gargoyle ready to pounce. It is truly enormous. Construction began in 1489 on the ancient site of a Roman church, and was completed in 1680. Sainte-Marie is one of the last Gothic cathedrals built in France, but took so long to construct that it has an elegant Renaissance facade. Inside, you will find a massive and rare 17th-century Jean de Joyeuse organ, a kaleidoscope of 17th-century stained glass windows by the renowned Arnaud de Moles and 13 masterfully carved oak stalls featuring 1,500 biblical icons from the Old and New Testament. 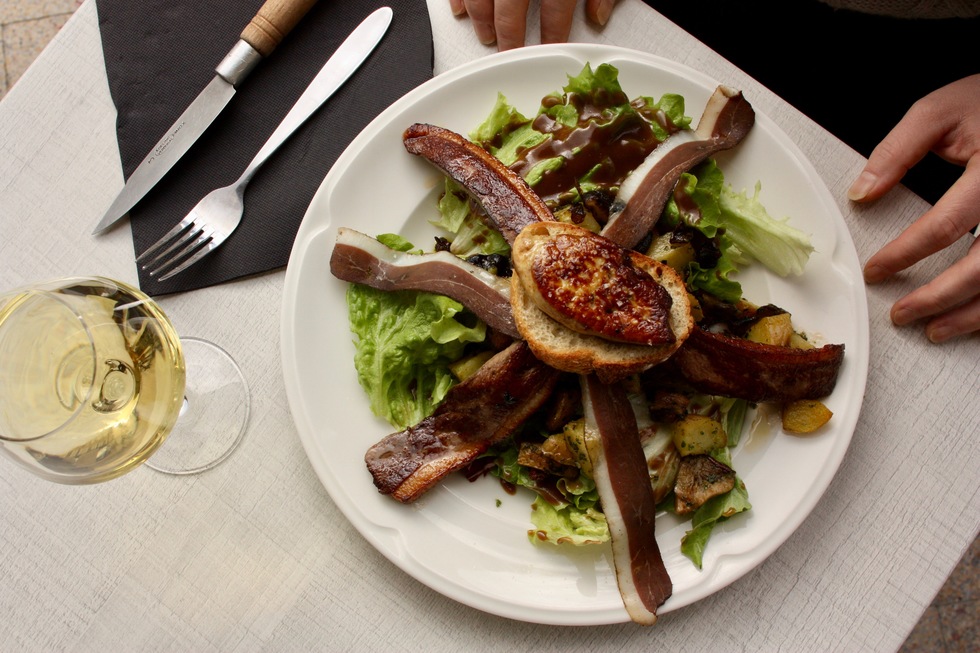 Gascony is duck country, literally—according to some reports, ducks outnumber people 20 to one. Auscitains are fiercely proud of the their duck culinary heritage, with foie gras as its crowning achievement. Some part of the duck can be found on every menu or sold at every market or grocery store in the city—some restaurants even serve foie gras hamburgers. At the Café Brasserie de France, next to the Cathédrale Sainte-Marie, the most popular dish is Poêlée Gasconne (i.e. the Gascon Skillet, pictured above) featuring magrets séchés (dried duck breast) and duck filet on a bed of romaine, potatoes, and wild mushrooms, all topped with a slice of grilled foie gras. 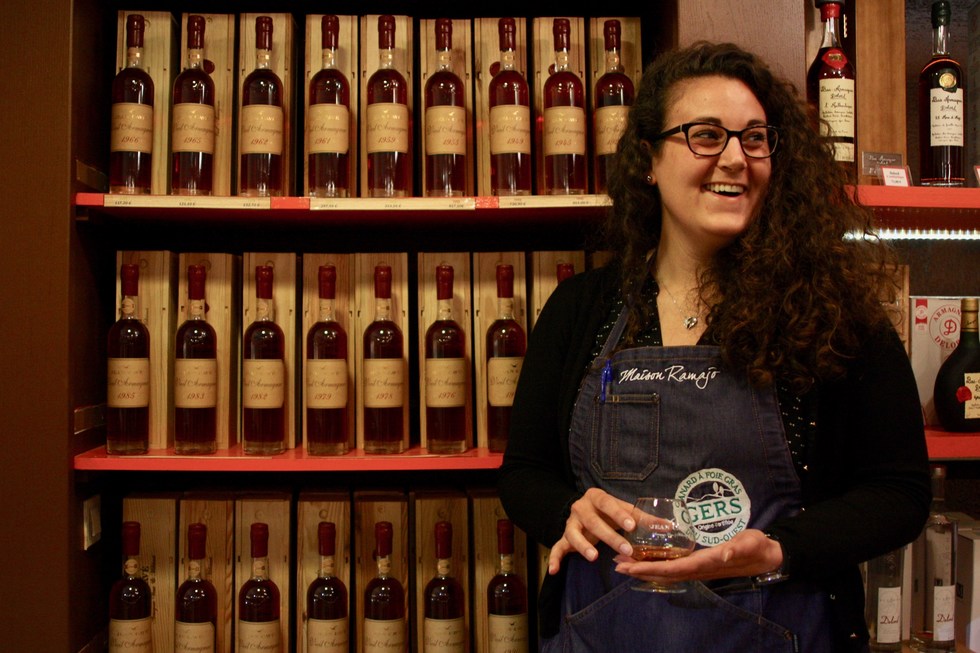 For a nightcap, Gascons sip armagnac. Oft-compared to cognac, it’s a brandy unique to this corner and terroir of France. Ask an Auscitan which armagnac producer is best and settle in for an impassioned monologue. The fortified wine is made from a blend of grapes and comes from three distinct regions—Bas Armagnac in the West, Armagnac Tenareze in the middle, and Haut Armagnac to the East. Distillery chateaus dot the landscape and make for fine day tours (the Auch office of tourism also organizes guided tours). If you prefer to stay in Auch proper, there are several armagnac caves with tastings, such as Le Comptoir de Tistou (pictured above), which carries all-local armagnacs as well as flocs (an aperitif wine) and Côtes de Gascogne wines, often served with a meal. 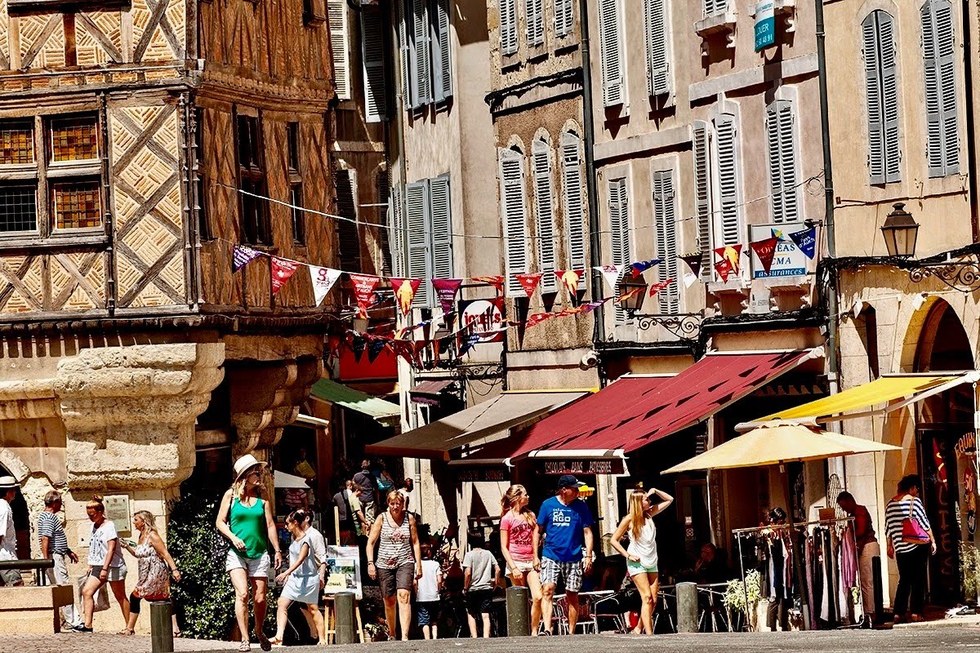 The medieval Rue Dessoles, lined with creamy limestone mansions adorned with pastel shutters, is a street for flâneurs (strollers) and lovers. Weaving through Auch’s historic quarter, Rue Dessoles is bookended by the quintessential 15th-century maison à colombages (half-timbered home) on the north end and the 19th-century Eglise Saint Orens on the south. In the several blocks between are independent bookstores, boutiques, cafés, patisseries, gourmand shops, an artists’ atelier, and a three-story toy store. The thoroughfare is ideal for Auscitain-watching, from people promenading with their dogs to school children on lunch break to market-goers carrying basketfuls of produce. 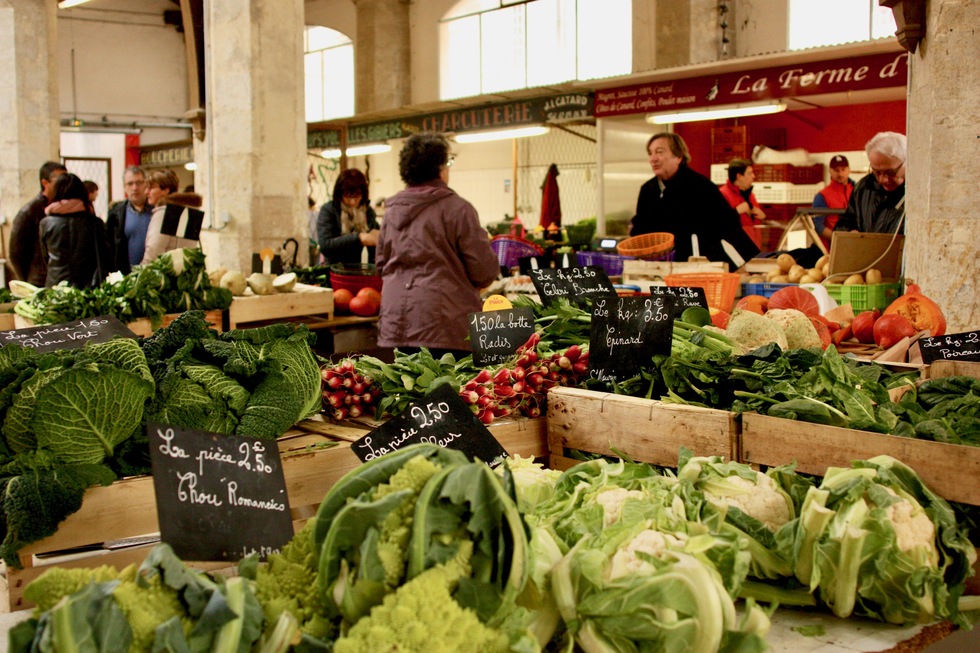 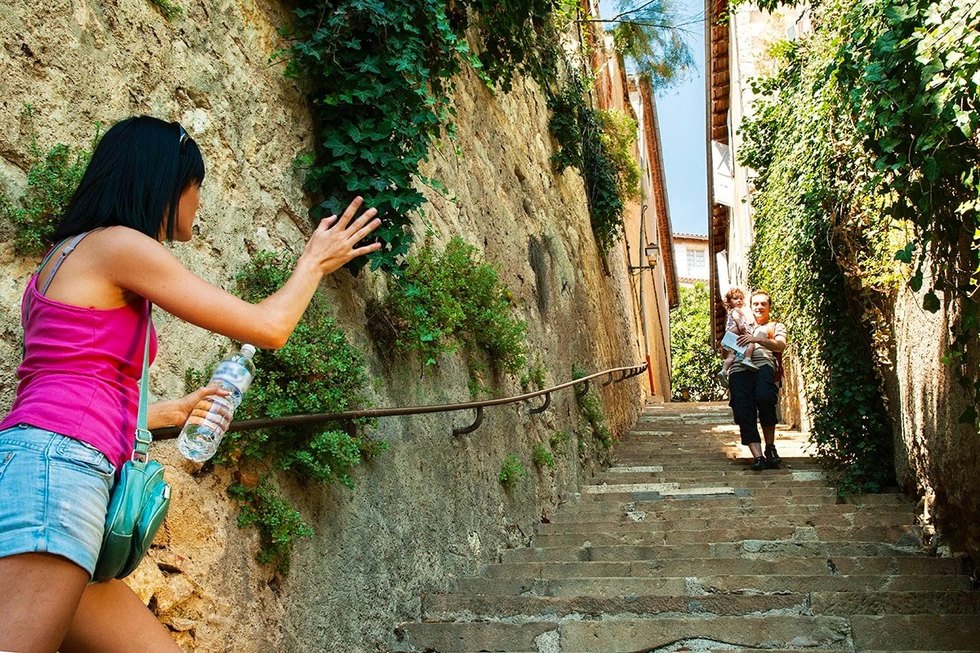 On the south side of the cathedral, five pousterles—steep, narrow medieval streets and staircases—descend from haute-ville like snakes to a stream. Each pousterle (Pousterle de Paris, Pousterle de las Oumettos, Pousterle de Couloumats, Pousterle de l’Est, and Vieille Pousterle) has its own character with varying degrees of dizzying incline; Vieille Pousterle has a grade of a whopping 27 percent. The passageways offer stunning framed views of the city’s neighboring hills, valleys, and, on clear days, the Pyrenees mountains. 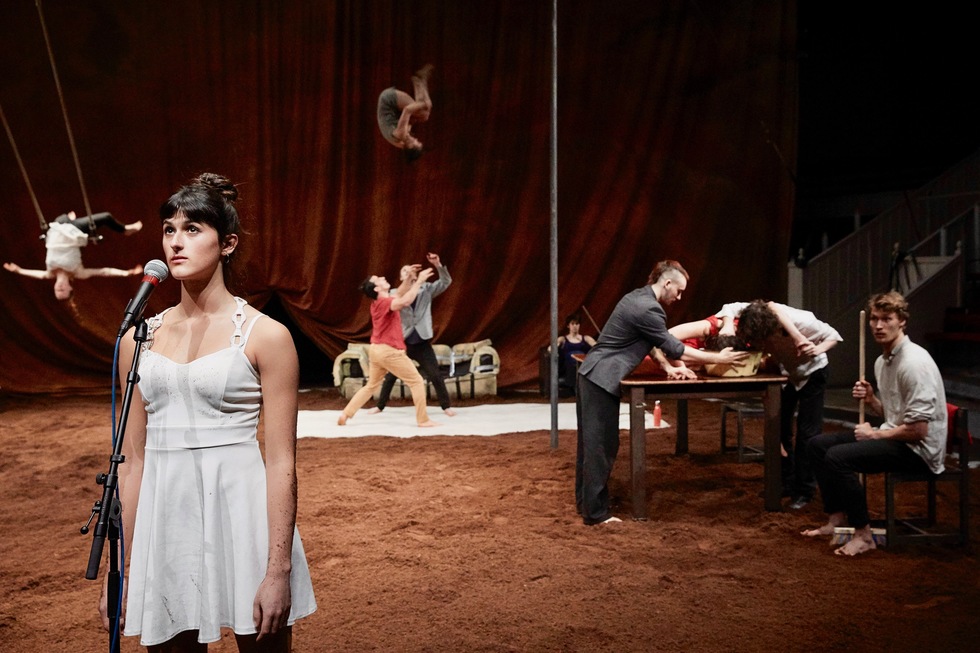 Located in the renovated former site of a 19th-century cavalry barracks is the magnificent home of CIRCa, France’s national center for the contemporary circus arts. CIRCa encompasses a circus, school, and annual festival—a cultural punch typically only found in large metropolitan centers. The campus includes the timbered Dôme de Gascogne, a rehearsal hall, apartments for international circus arts residencies, a restaurant, and information center, as well as an independent cinema across the street (Ciné 32) that is a frequent partner in festivities that are open to all. At its annual two-week festival at the end of October, and at one-off events throughout the year, CIRCa takes an innovative approach, incorporating a modern mix of acrobatics, dance, movement, comedy, juggling, live music, storytelling, spoken word, and multimedia—a far cry from the classic American circus. Each October, 20,000 to 30,000 people from around the world, descend on CIRCa, creating the feel of an international village. 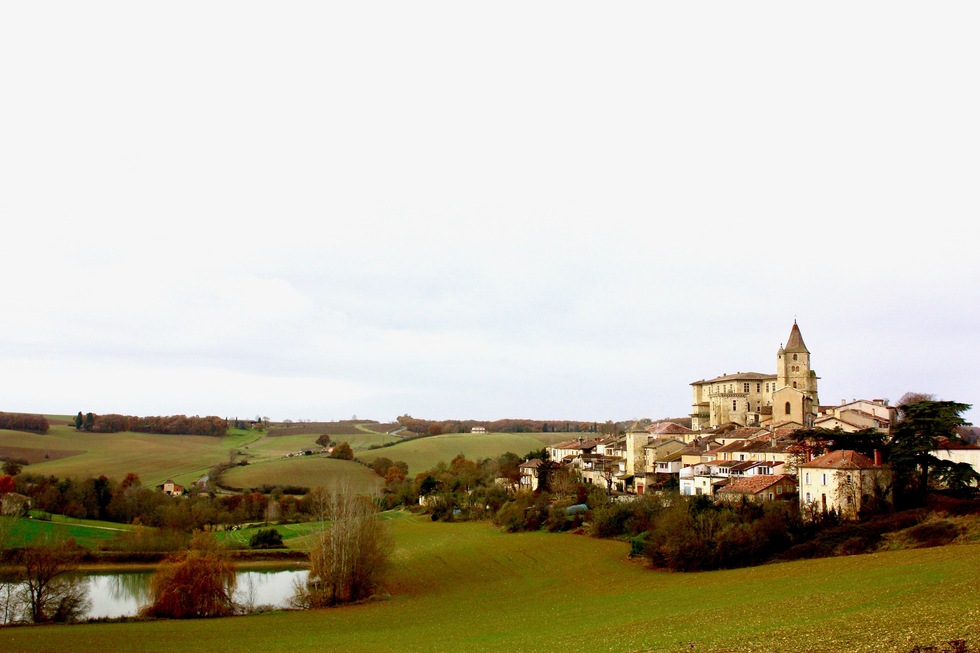 Less than nine miles from Auch, Lavardens makes for the perfect excursion offering some the best panoramic views of Gascony. The picturesque village and Château de Lavardens look like something dreamed up in a fairy tale. It all began with the Count of Armagnac, who built a fortress on the spot in the 12th century. In the 17th century, the lord Antoine de Roquelaure, a close friend of Henri IV, rebuilt it into a castle, which was sold, post-Revolution, to 12 families who let it slide into disrepair. The castle sat in ruins for 124 years, its only patrons a colony of birds and an encroaching forest, before a dedicated team of volunteers and specialists restored it in the 1960s to the stately presence it is today, complete with feudal vestiges. From March to December, visitors can walk along beautiful floors of dallage—pink and cream stone patterns, see trap doors and arrowslits, and test the incredible acoustics of the Salle de l’Echo. The surrounding village is well worth a stroll as its been officially designated by the government as one of “The Most Beautiful Villages of France” (there are 157 total throughout the nation). 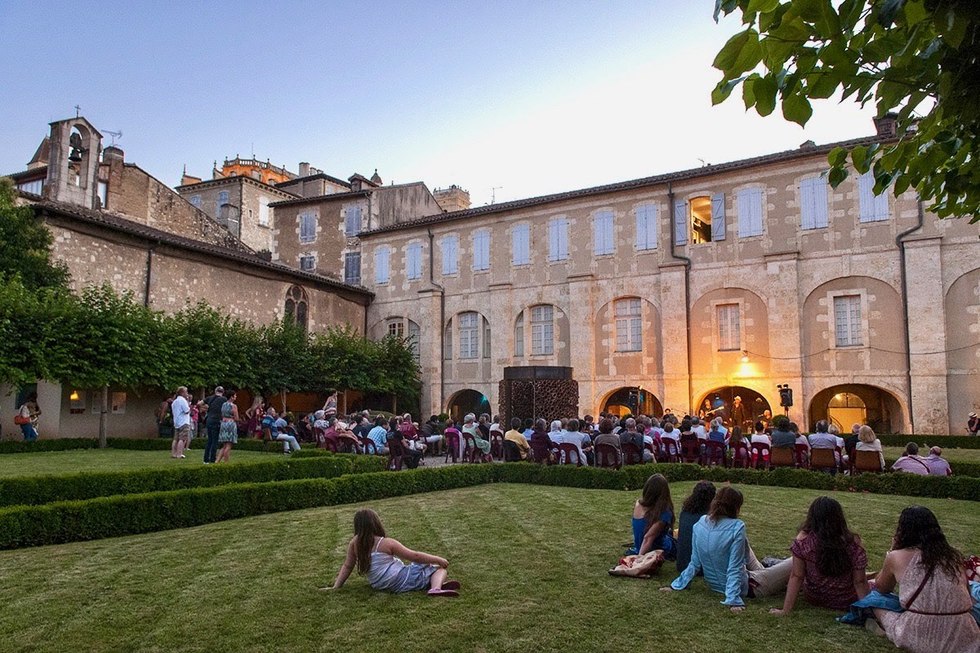 One of the oldest museums in France, and housing the country’s second-largest collection of pre-Columbian art, Musée des Jacobins (closed for January) is housed in a 15th-century convent tucked into the hill between the cathedral and the river. The museum’s central masterpiece is the mosaic “Mass of St. Gregory” made in Mexico City in 1539. The museum also features collections of Beaux Arts paintings, and a section that focuses on the history of Auch and its environs, from Roman times to now, displaying traditional Gascon costumes like bridal dresses and antique rugby gear (the Auscitains are mad about the sport). In the summer, the museum hosts concerts in the garden.